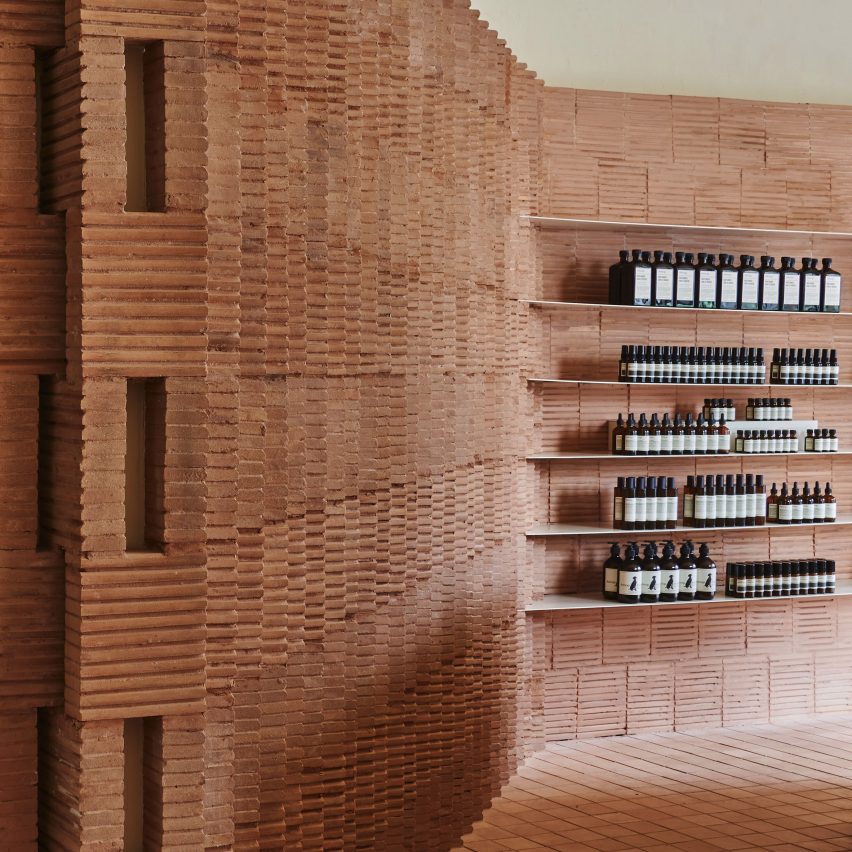 Mexican architect Frida Escobedo sourced rammed earth from her home country to make the rosy brick walls in this Aesop store in Brooklyn.

Hundreds of slender bricks stacked together and arranged in a gridded design feature in the Escobedo‘s Aesop store, located in Brooklyn’s Park Slope neighbourhood.

“Just by placing it in a different direction or creating a different pattern, you have this beautiful, intricate design,” Escobedo told Dezeen at the shop’s opening on 29 March 2019. “That was the first inspiration.”

“I’m always fascinated by this idea of having something modular, and very simple, such as a brick,” she added. 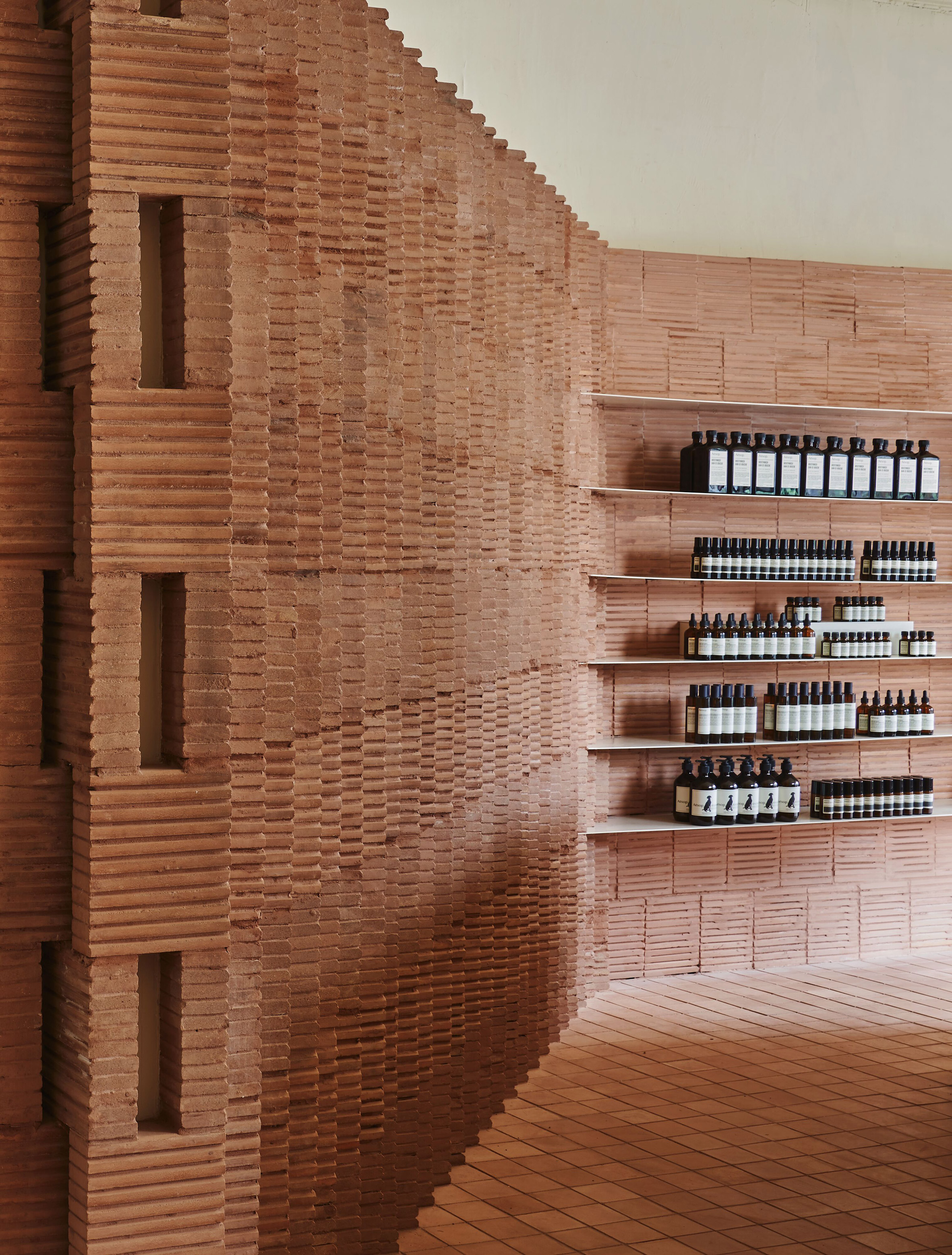 The bricks at Aesop Park Slope are made by hand from Oaxacan red earth, and created in a workshop near Escobedo’s studio Taller de Arquitectura in the Mexico City.

The technique for the adobe brick was developed by a former student of Frida’s, Patricia Medivil.

Medivil uses natural pigment made out of the earth sourced in Mexico to create the rosy hue.

“Usually when we want this type of material, we go to her,” said Escobedo. “They have beautiful colours.” 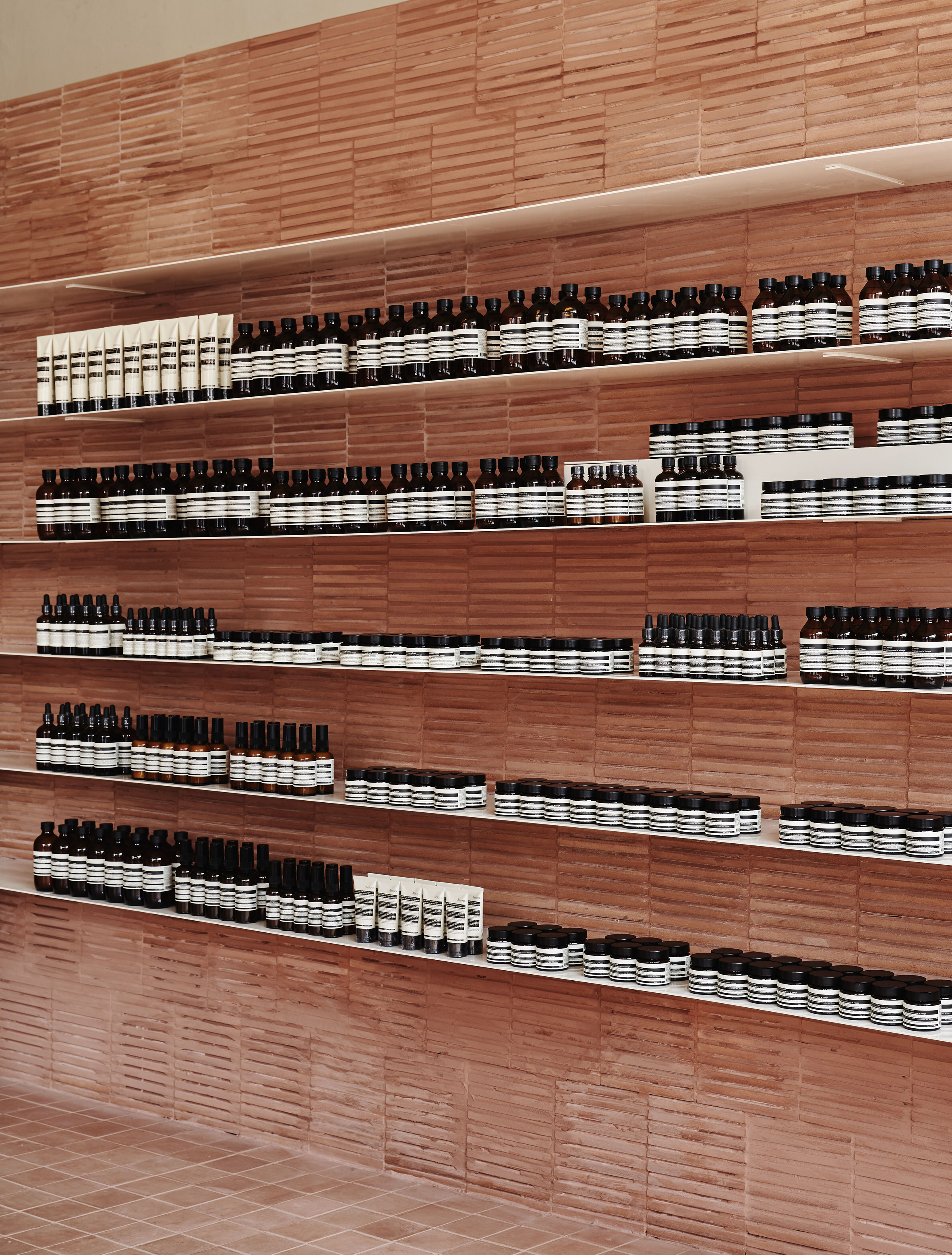 Aesop Park Slope is the beauty brand’s newest location in Brooklyn – two other outposts are located in the borough’s Williamsburg and Boerum Hill neighbourhoods.

The store’s layout is arranged around a series of the brick walls, which are layered one behind the other to guide the customer throughout the linear store.

These modular pieces divide the entrance from the check out counter, and further beyond.

“Alcoves and corners emerge as areas of inhabitation and display; the negative space behind the walls becomes a place of repose for staff,” said a project description.

“They tessellate in diagonal rows that reiterate, at a smaller scale, the angling brownstone streetscapes.” 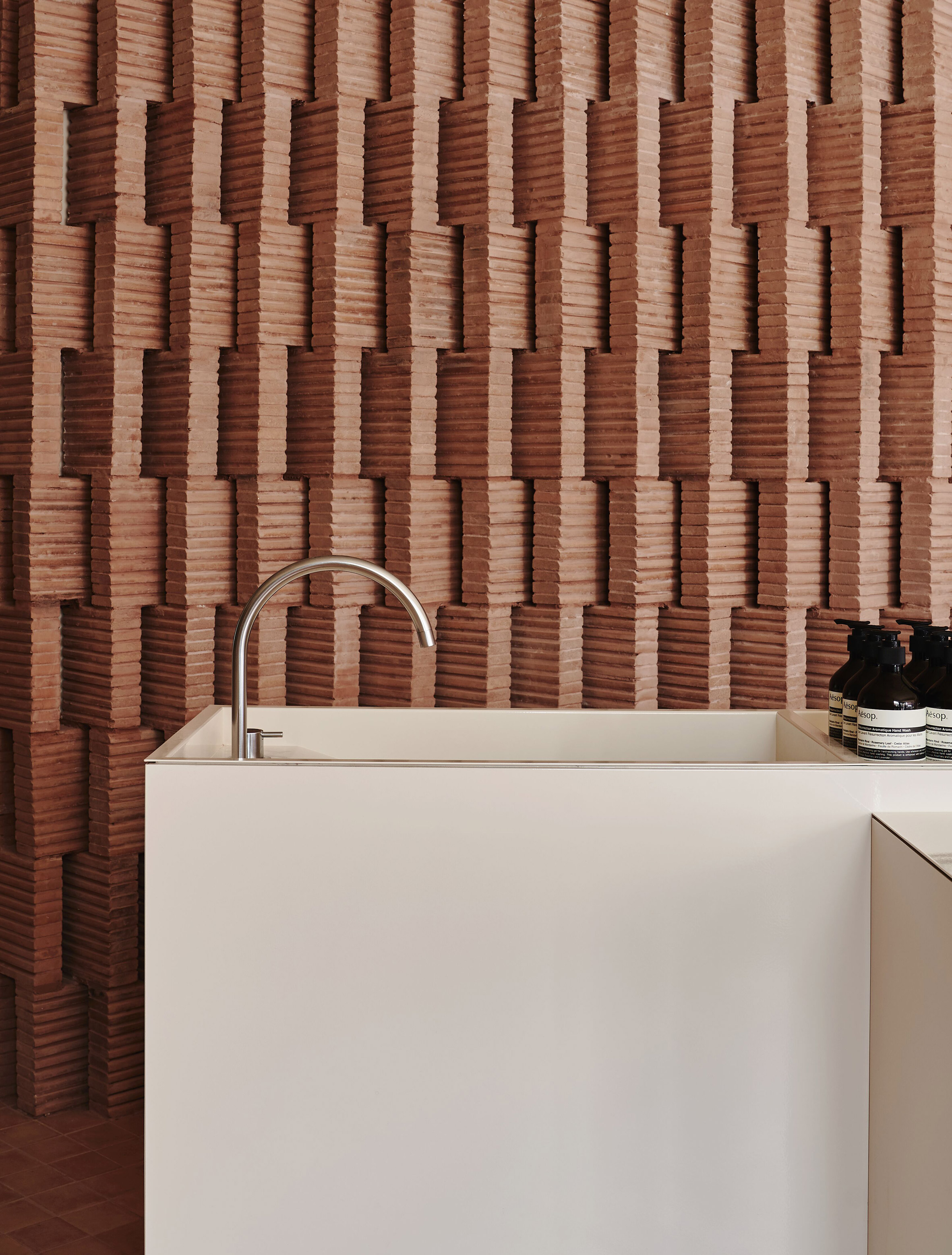 In addition to referencing Mexico’s surroundings, Escobedo also reflected on the Brooklyn neighbourhood for interior design.

Aesop Park Slope occupies a building on a corner lot in the residential area characterised by mid-19th-century brownstone houses. Escobedo was inspired by this local masonry.

The store features angled entrance and large glass windows that are kept intact. Inside, existing brick walls are painted white, while an original stamped tin ceiling is left exposed.

“To me, it was important that it was not exactly the same material as you see in the facades, but it was something that would reinterpret that idea,” Escobedo said.

“I think it’s interesting to have a conversation of something that’s produced somewhere else,” she continued. “It tells a different story, but at the same time relates to the context.”

Two narrow, powder-coated metal sinks are designed as troughs, and overlap and diverge as a reflection of the store’s diagonal arrangement. 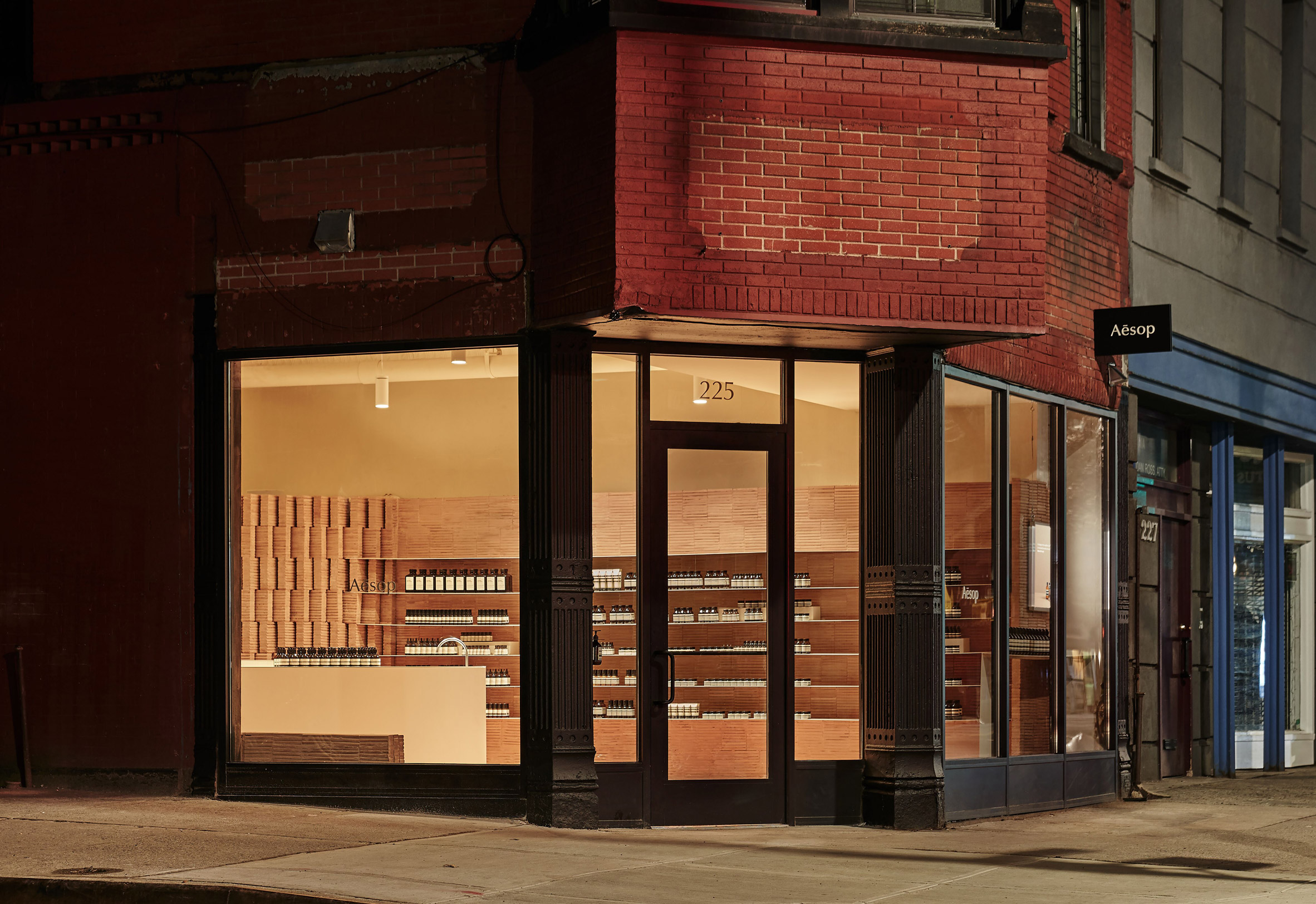 Escobedo was born in Mexico City in 1979 and set up her studio – Frida Escobedo, Taller de Arquitectura – in the capital in 2006. She has gone on to international success, becoming the youngest architect yet to have been commissioned to design the prestigious Serpentine Gallery Pavilion.

Dezeen has produced an exclusive movie series featuring the architect, in which she describes how she fell into the profession and the architecture scene in her home country.

Aesop’s choice of the Mexican architect for the Brooklyn shop marks an unusual choice for the brand. It typically works with local architects and designers to create interiors for each of its stores.

Recent examples include a store in New York’s Upper West Side shop designed by Tacklebox and a Montreal store by Alain Carle.

Next week, Dezeen’s founder Marcus Fairs will be on a panel hosted by Aesop at Milan design week, and is just one of a number of initiatives by Dezeen for the week-long design event.

Photography is courtesy of Aesop.