Yuichi Yoshida & Associates has completed a house in the suburbs of the Japanese city of Kanazawa with pared-back interiors and an irregularly layered structure that challenges the area’s housing typology. 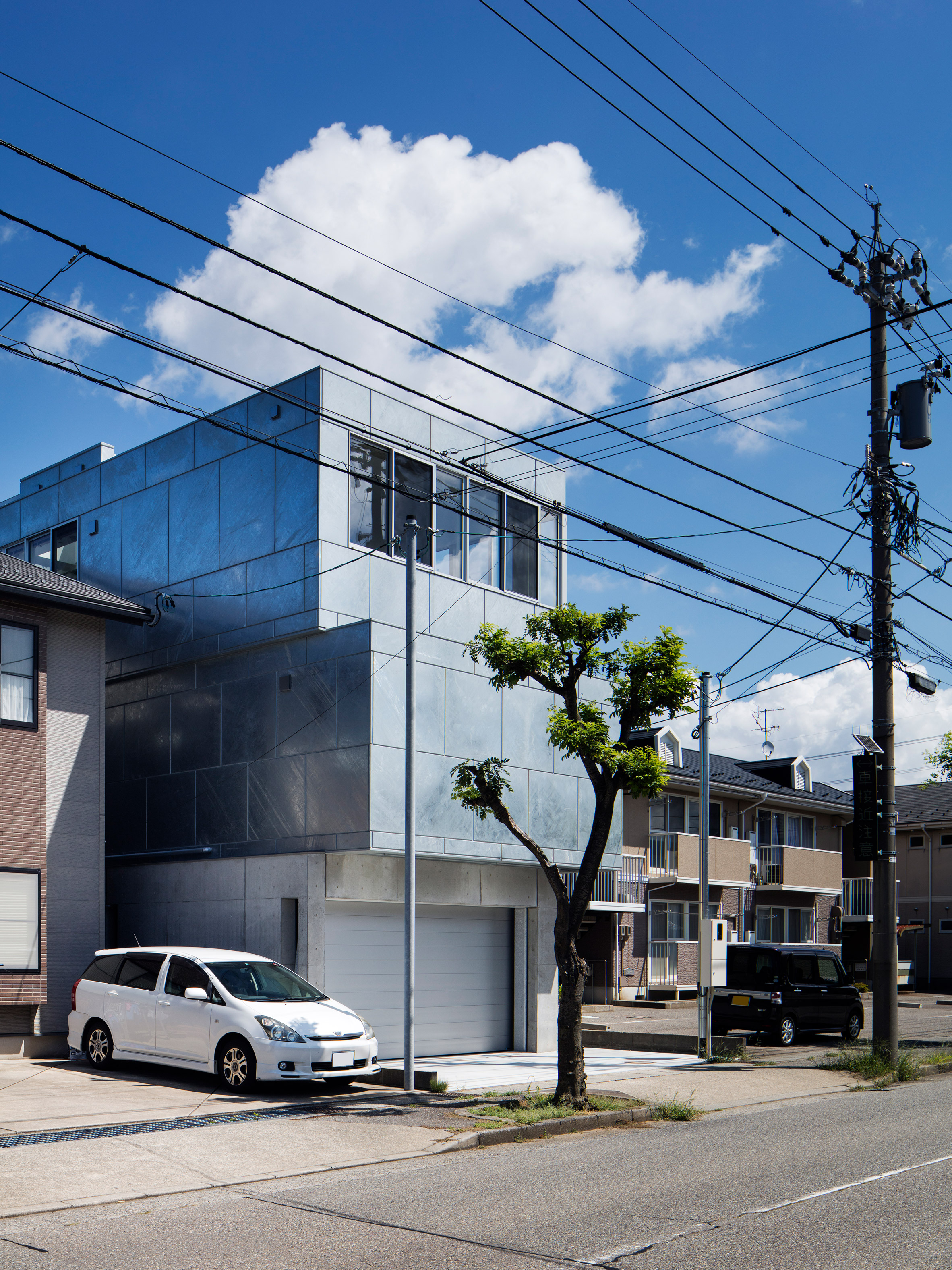 Set back from the roadside, the unconventional house comprises two steel-clad volumes set askew on a concrete base.

The architects chose galvanised steel cladding for it ability to withstand harsh climate conditions experienced in the Ishikawa Prefecture, while also gradually losing their shine over time. 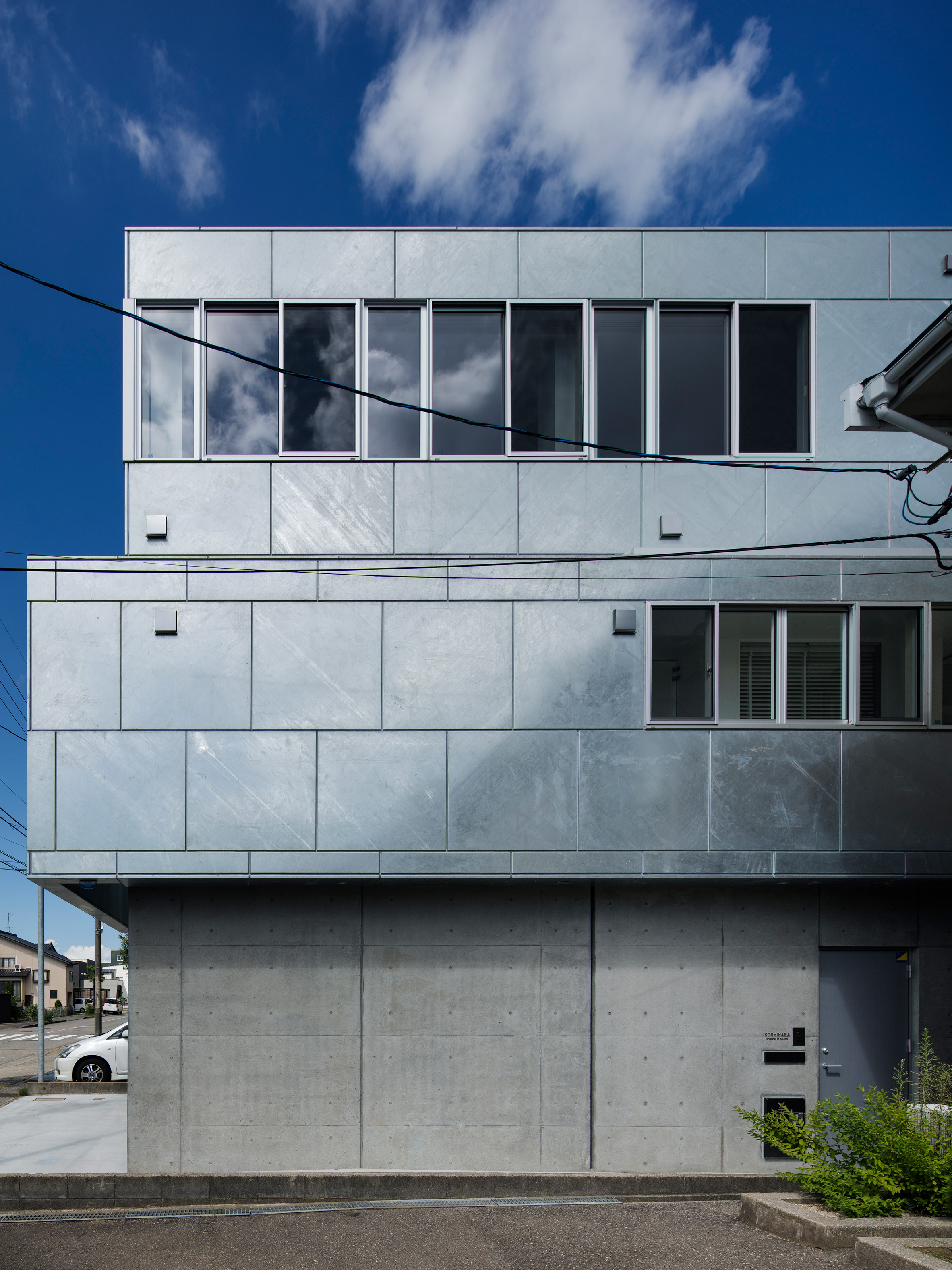 “In order to pay attention to the surroundings, we stacked volumes that were slightly smaller than the site, while shifting them back and forth and to the left and right,” explained the architects. 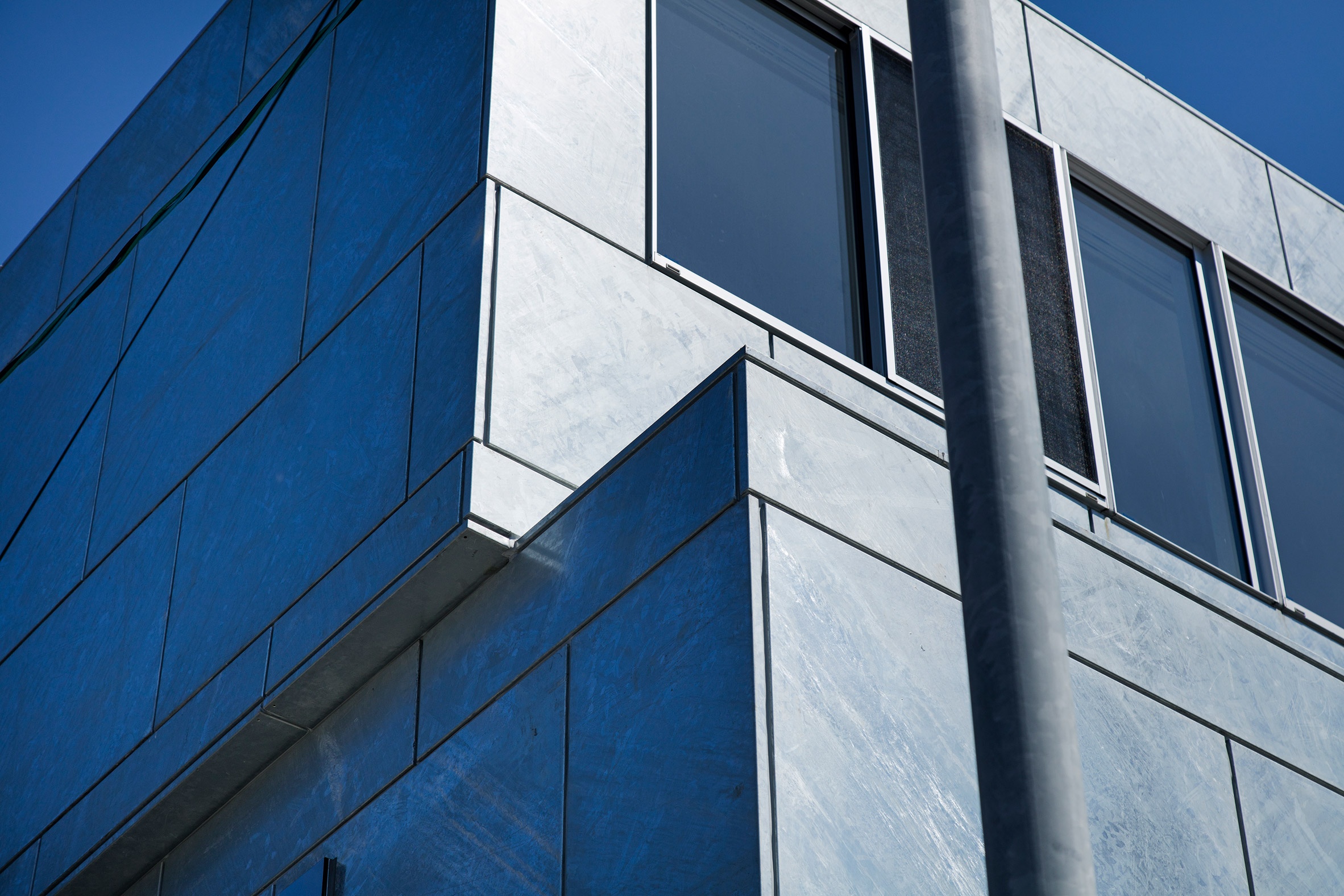 “The exterior cladding is used in all fields, from air conditioning equipment, to civil engineering infrastructure and automobiles,” they continued. “Initially it has a gloss that reflects the surroundings, but zinc gradually dissolves and becomes a dull grey.” 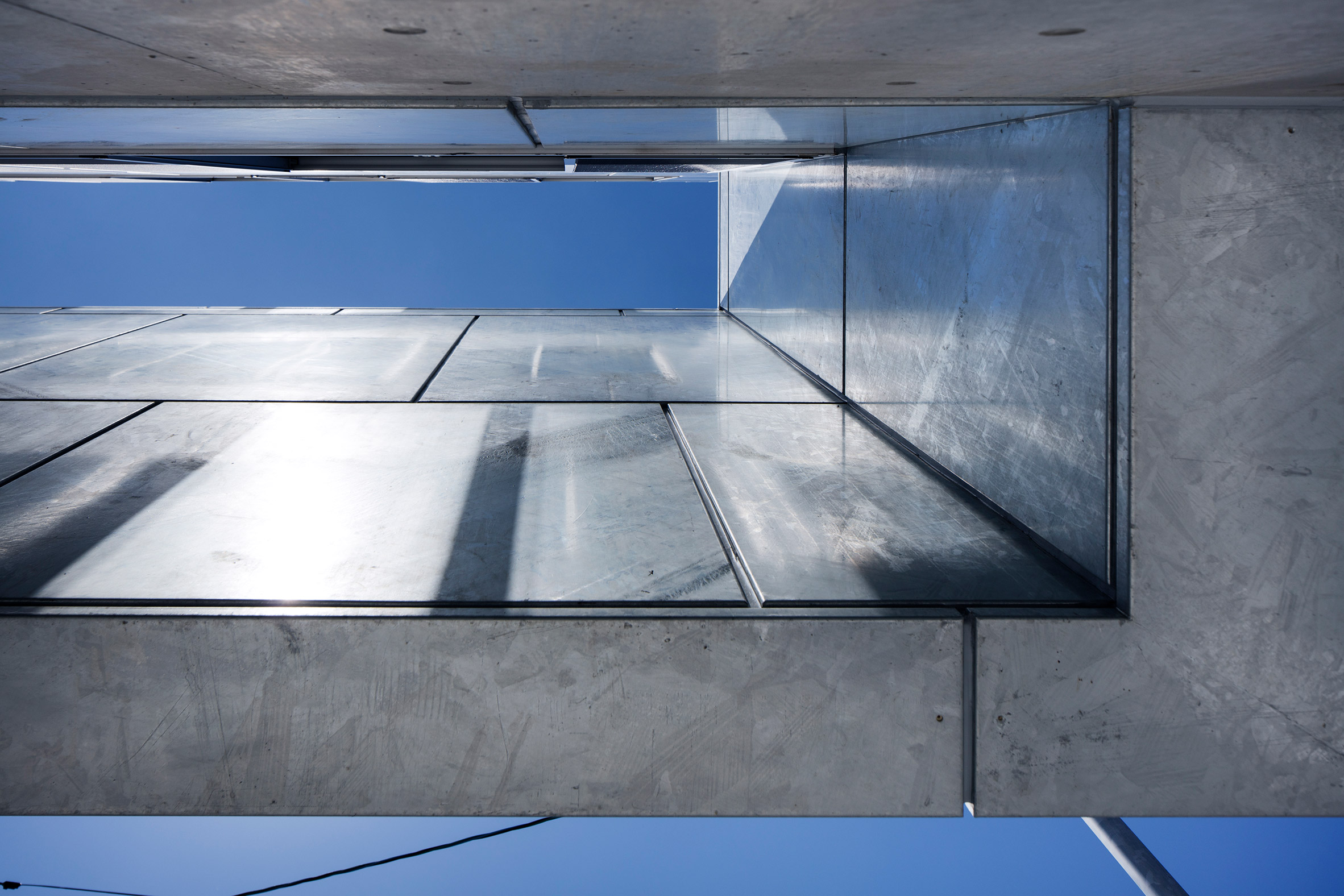 Alongside two sun rooms, Shinbohon House K comprises three bedrooms and an open-plan kitchen and living area, while service spaces including a contemporary bathroom and utility room are grouped at the rear of the house.

In contrast to its haphazard exterior, each of these rooms features a flush, bright white finish, differentiated by the choice of furniture and materials. 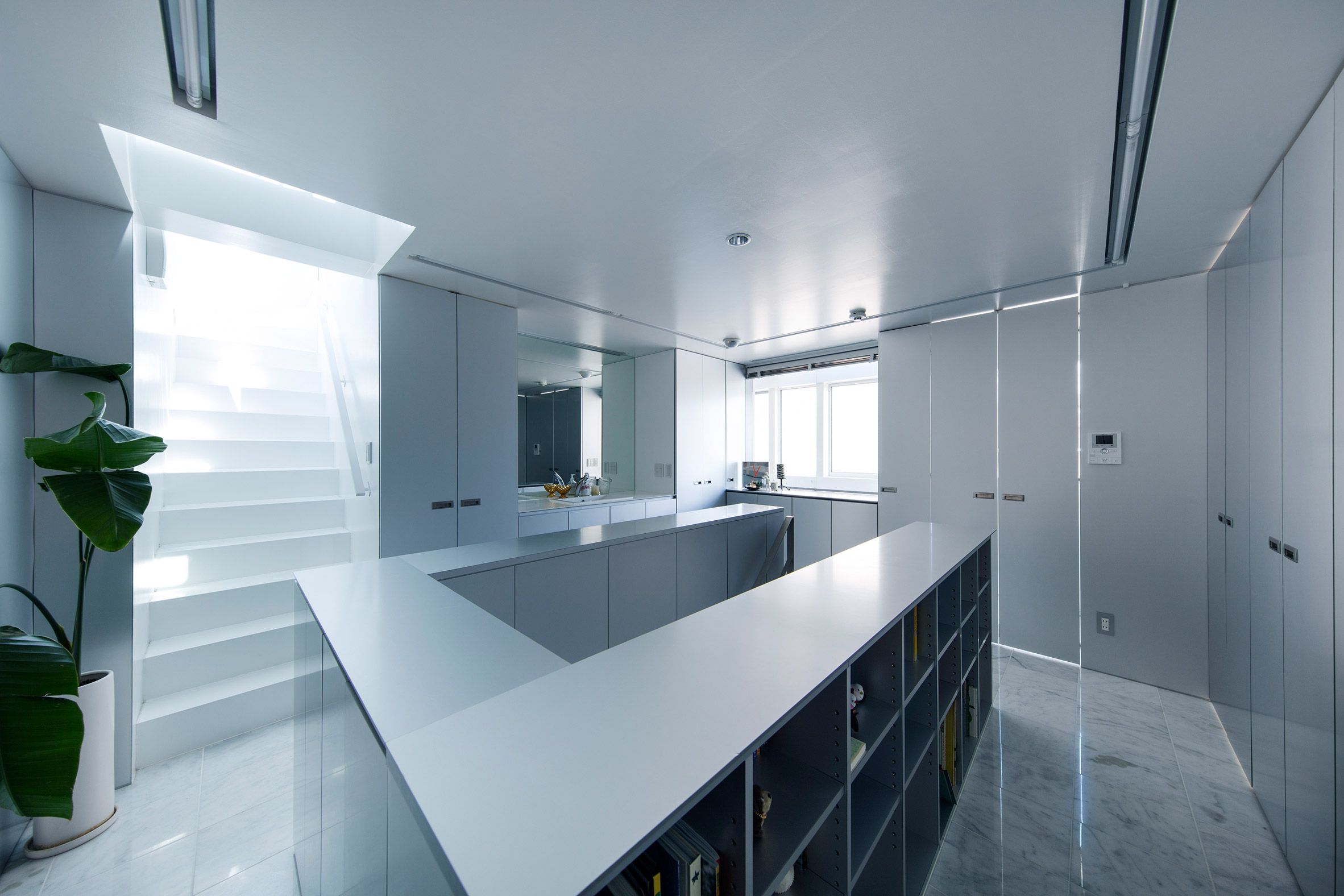 Teamed with monochrome cabinetry, and marble and black timber flooring, plants and a few art works introduce the only splashes of colour throughout the house.

With the transparency of the building’s facade increasing with each floor, outward views also assist in the differentiation of the spaces. 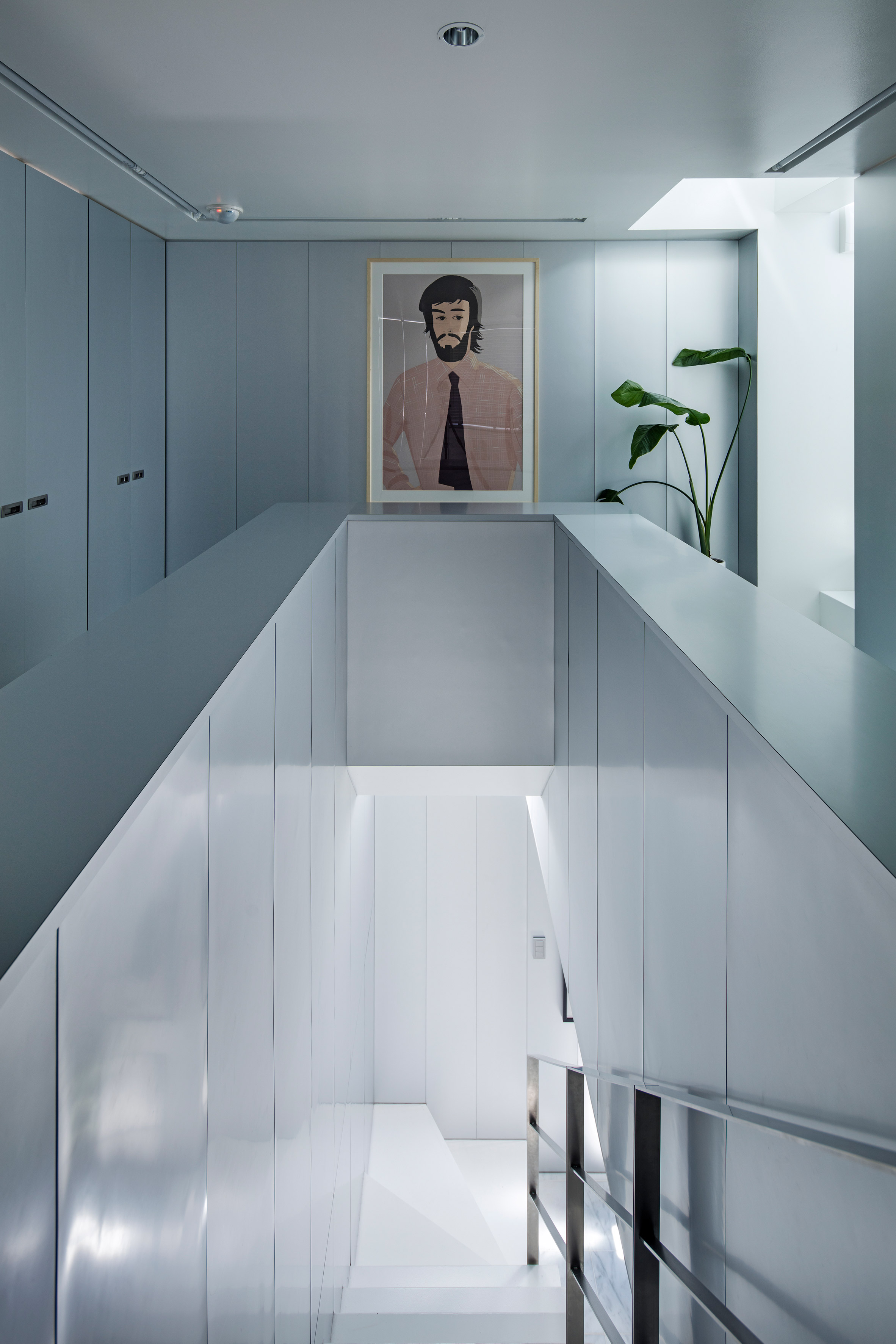 The ground floor is entirely closed off from the outside, excluding a built-in garage at the roadside, which is designed to alleviate the burden of winter snow and maintain privacy for the master bedroom.

However, to ensure there is sufficient natural light and ventilation in the ground floor rooms, a skylight has been incorporated where the first floor has been shifted sideways from the foundations. 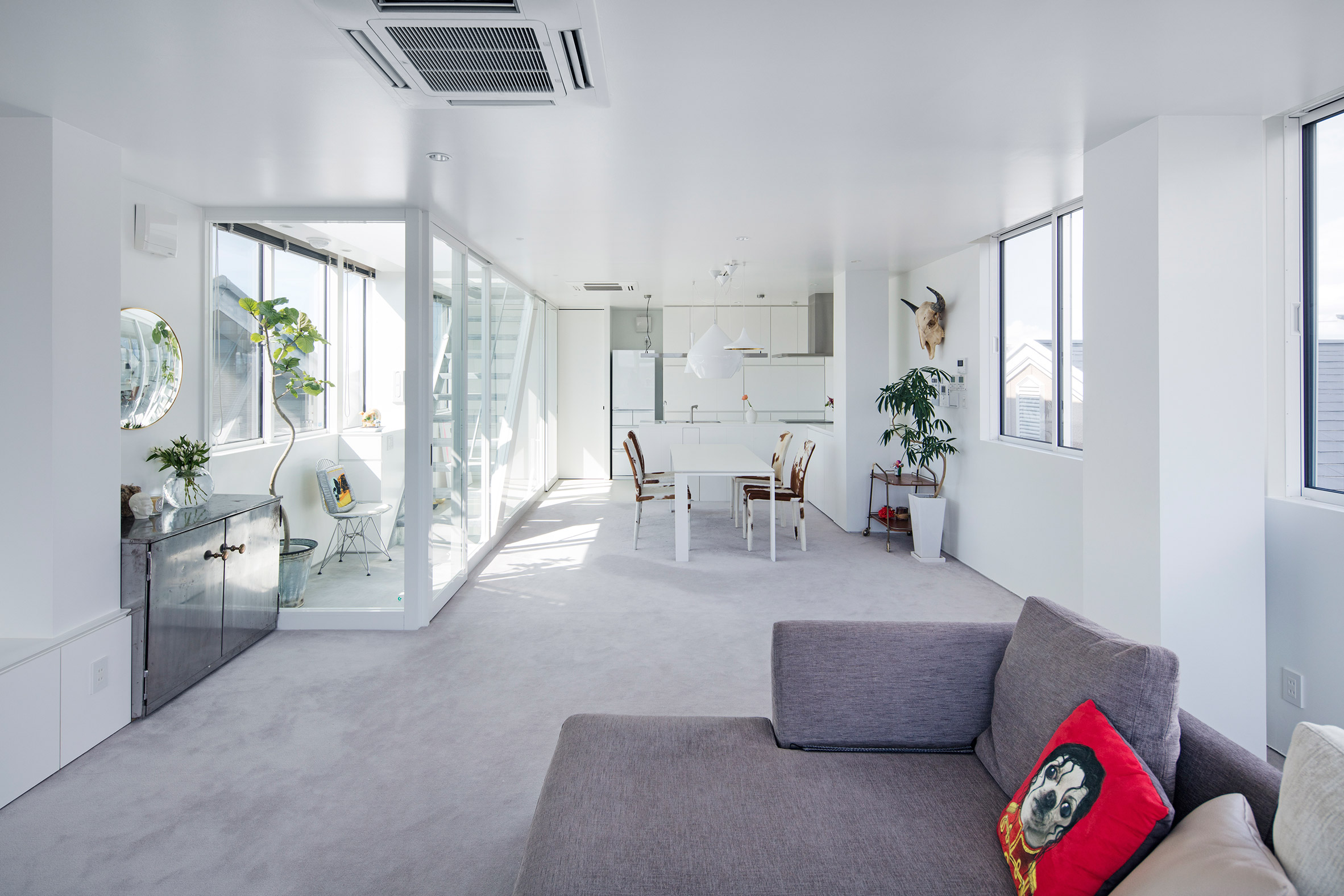 Windows are introduced on the first floor, out of sight from neighbouring houses, and only where there is an interesting view.

In complete contrast to the ground floor, the second floor features several outward views, creating a sense of openness while flooding the open-plan living room with natural light. 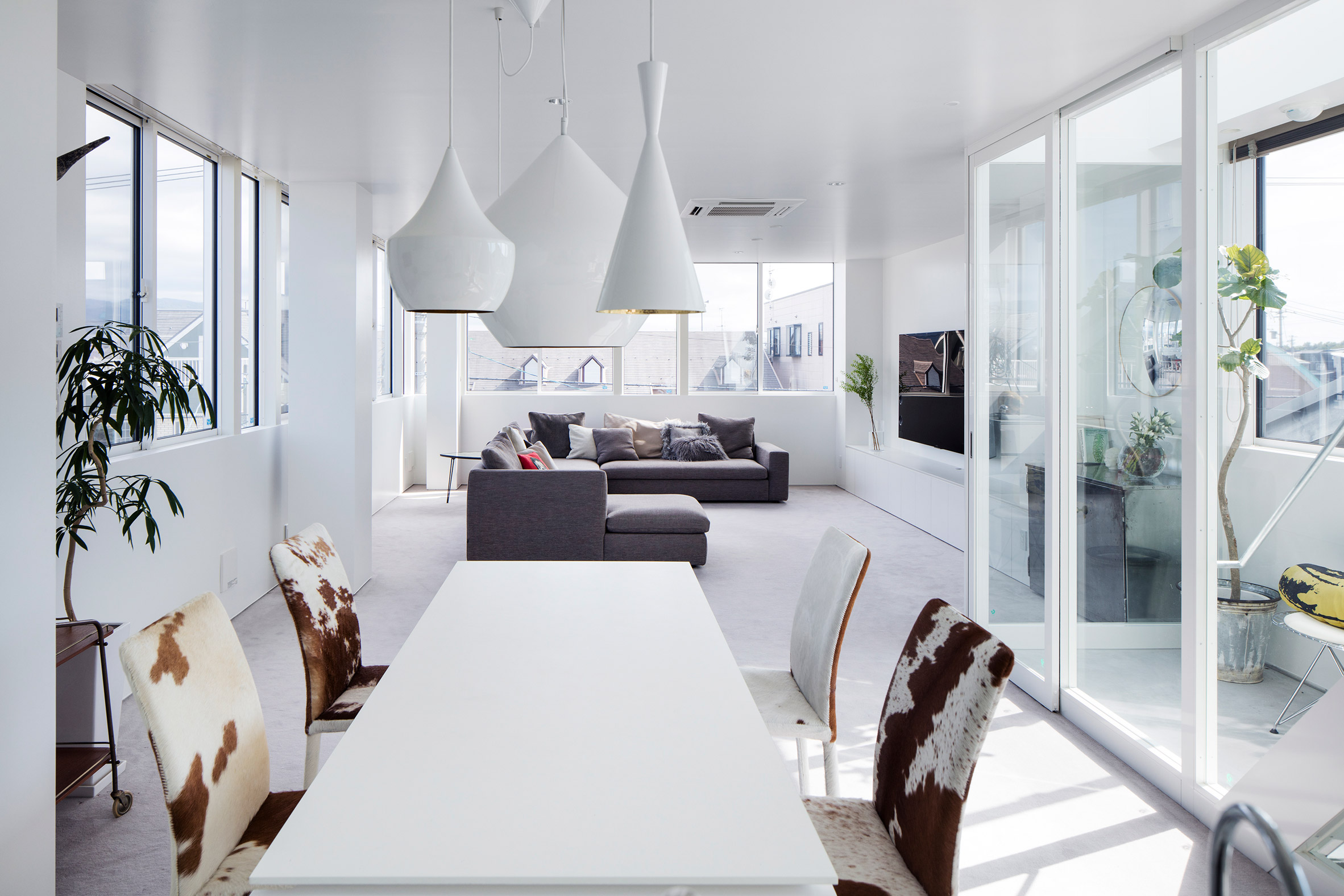 From the second floor, there is a semi-outdoor staircase that leads to a generously sized roof terrace.

The terrace forms an outside space for the homeowner that offers a private escape from the densely packed neighbourhood, offering views out over the roofs of the surrounding buildings. 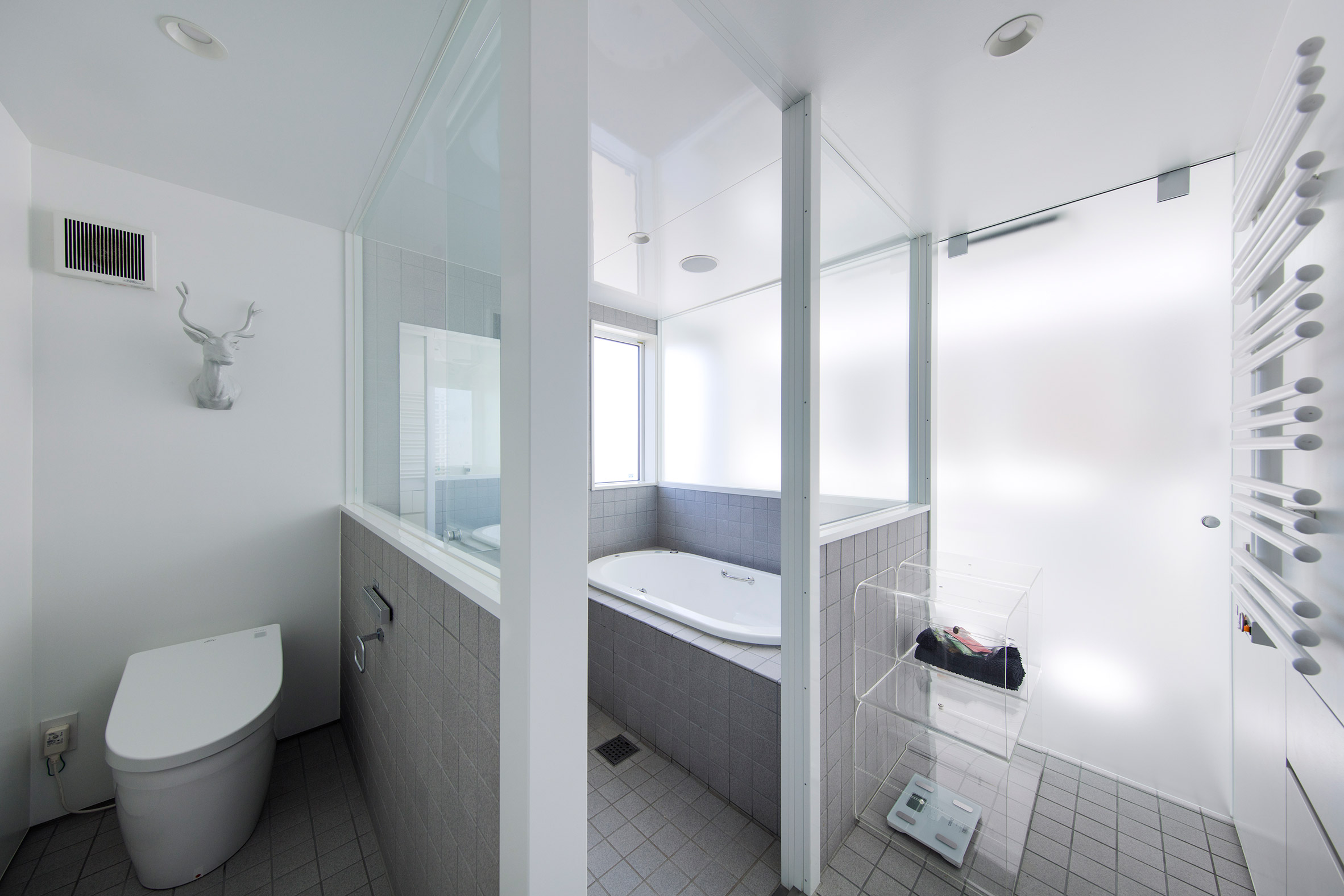 However when the roof is inaccessible during harsh winter winter, the occupants are still able to enjoy daylight and privacy by retiring to the sun rooms on the first and second floor. 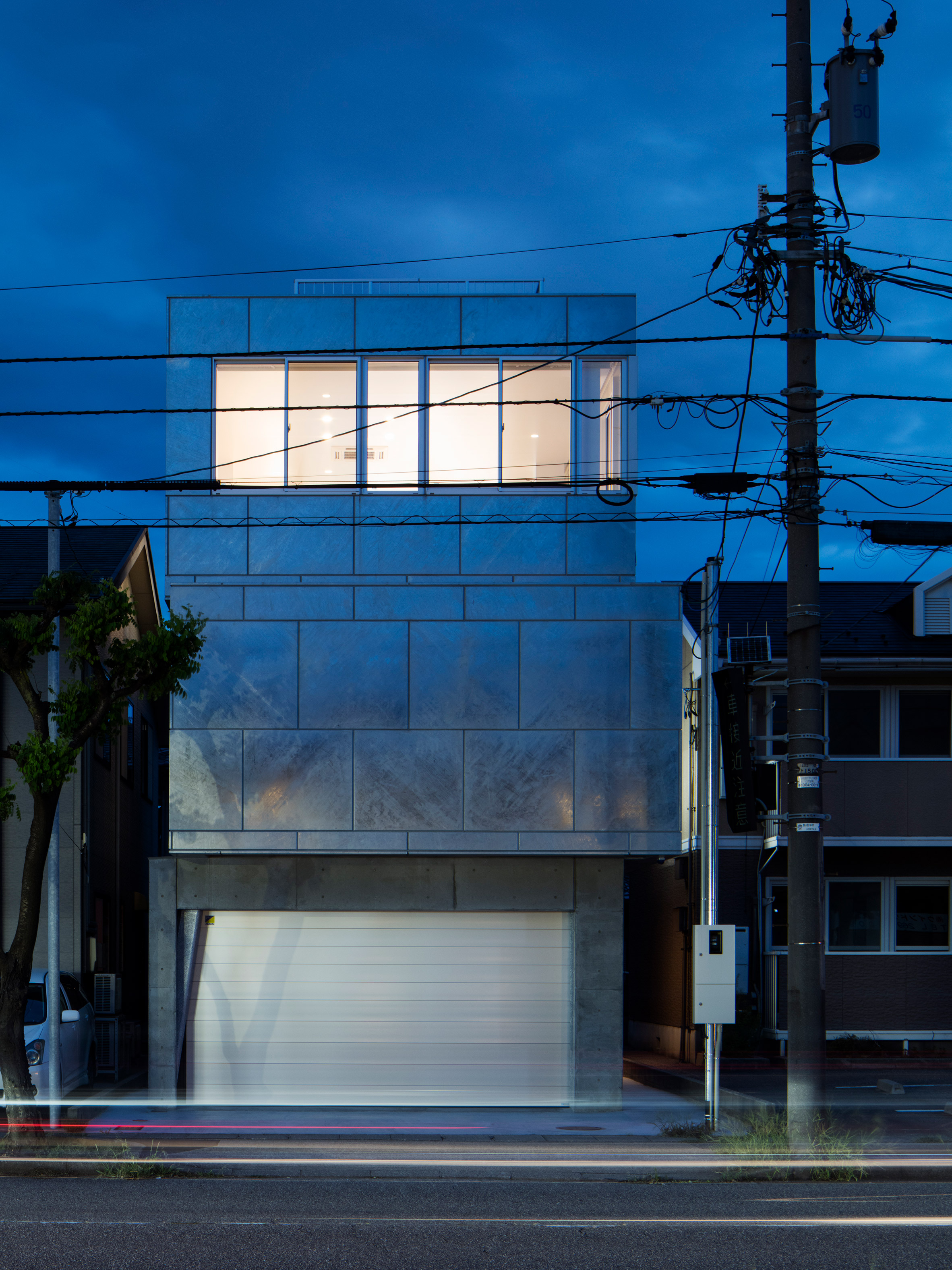 Other Japanese homes featuring metal-plated facades include a project named Black Box by Takatina, as well as a house by Fukiwaramuro Architects that is fronted by chain curtains. 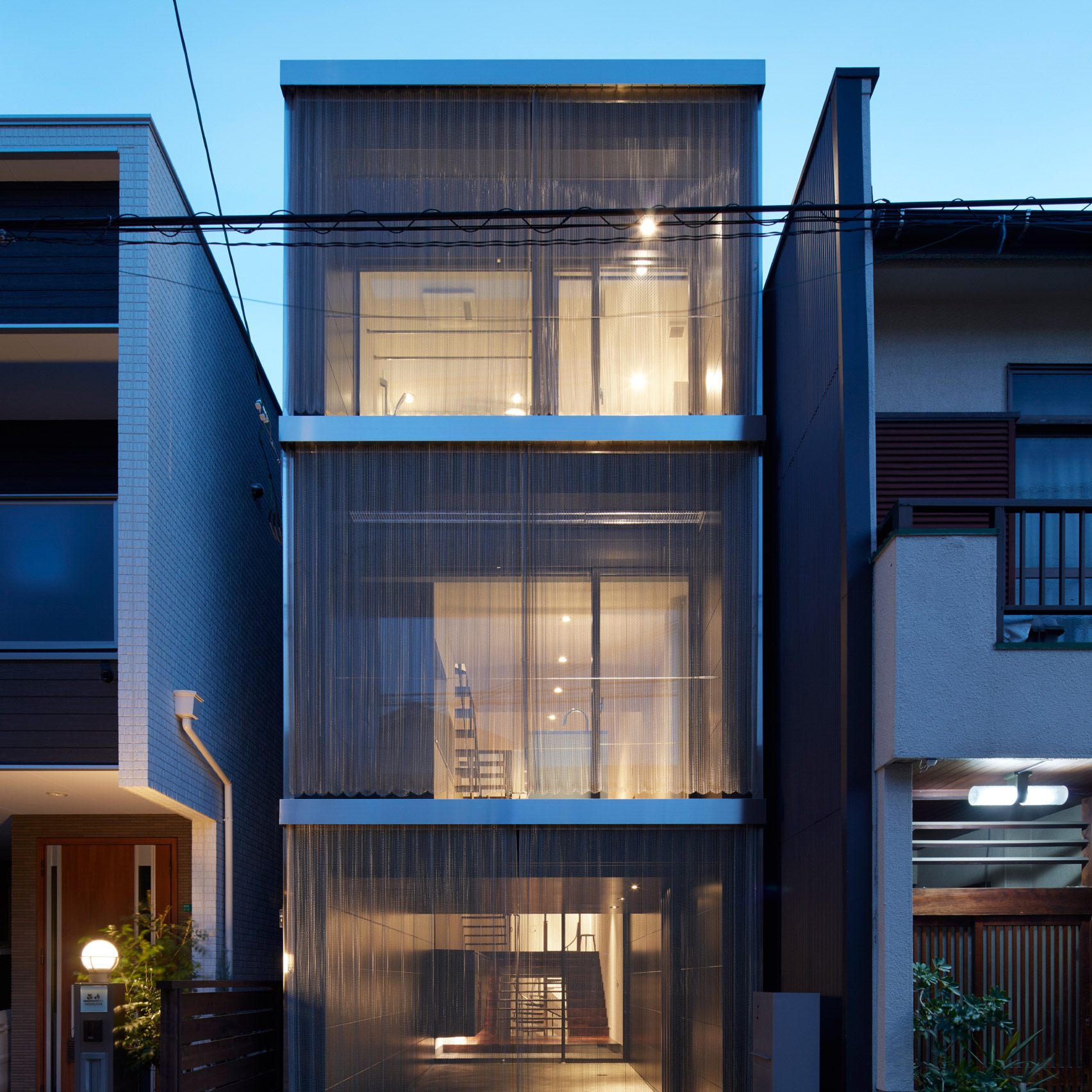