The living spaces of this seaside house in Cape Town are lined with sliding glass walls that can be pulled aside to connect the interiors with a series of external decks, patios and balconies overlooking the ocean. 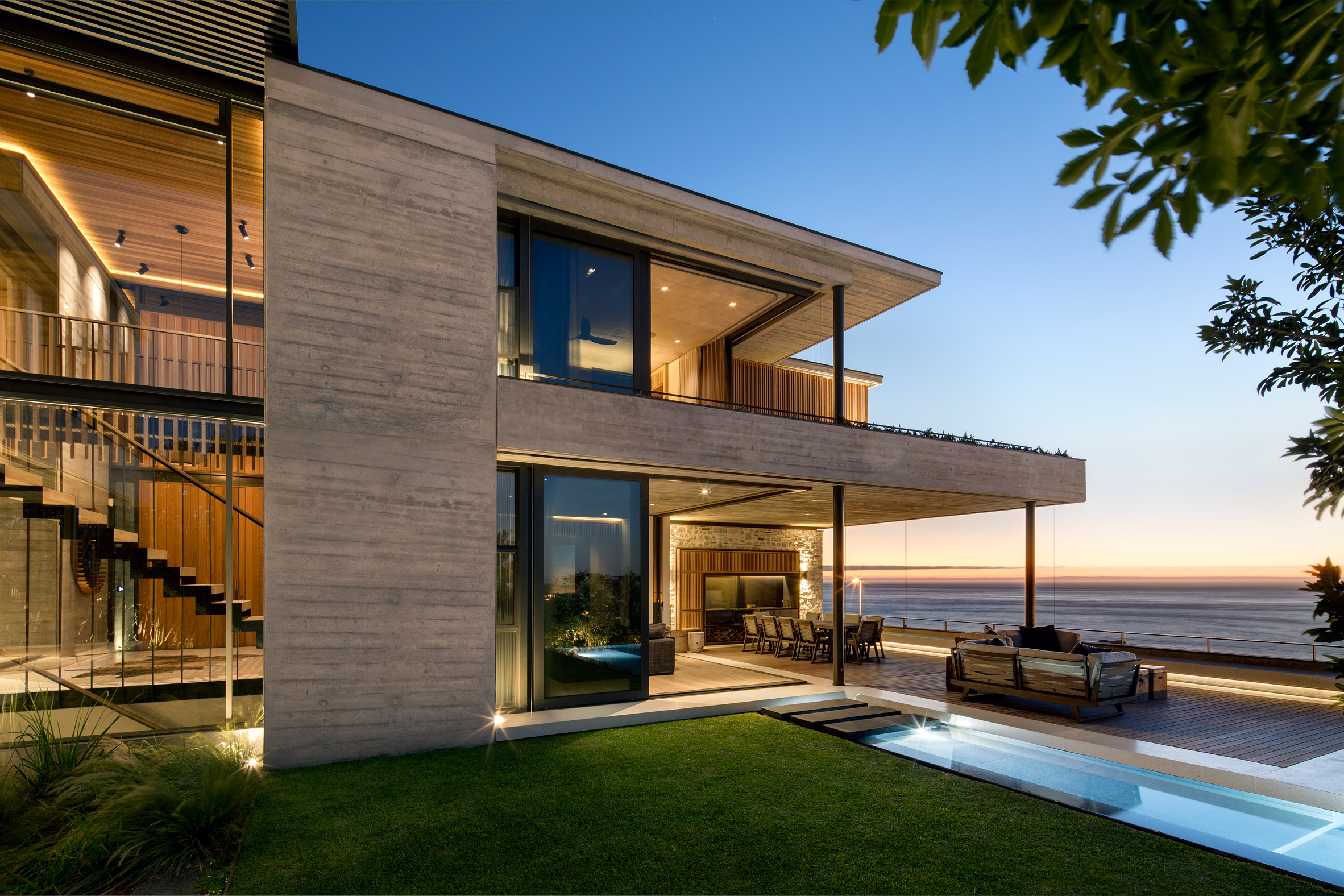 Clifton House was designed by local architecture firm Malan Vorster for a site in the suburb of Clifton, which follows the Atlantic coastline and is a popular location for joggers and walkers seeking excellent views of the ocean.

The area’s high footfall influenced the decision to create a building that offers a more distinctive presence to the street than the closed facades and high boundary walls common among its neighbours. 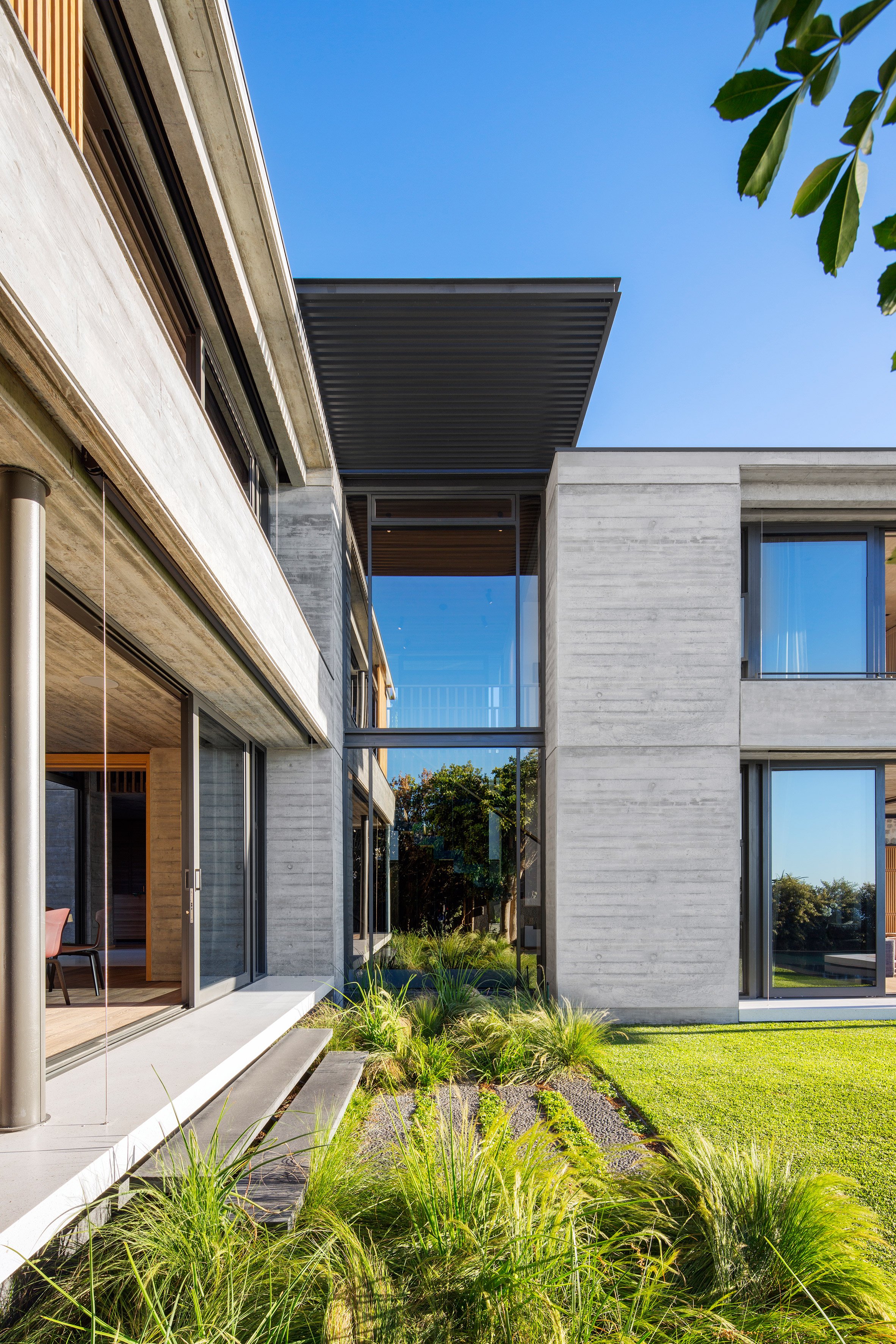 Landscaping at street level introduces some greenery to the urban setting, while the staggered arrangement of volumes and facade elements reflects the proportions of the buildings on either side.

By breaking up the street-facing elevation into sections featuring various materials, the architects sought to reduce the overall visual mass of a building that extends over several storeys to make the most of the available views. 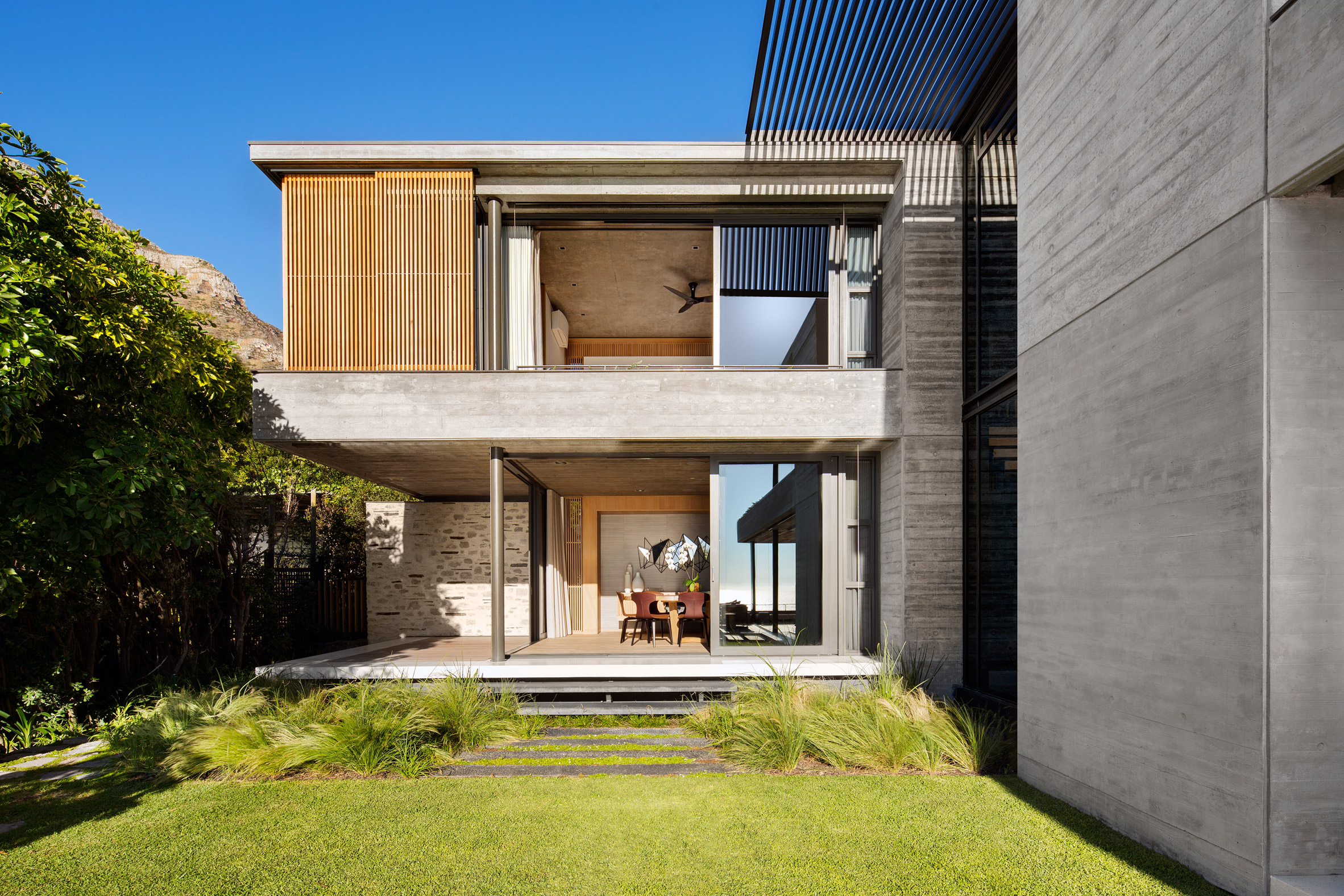 “The design aims to erode the building mass by means of smaller volumes and expressing thinner structural elements such as floor slabs, thereby creating an organic stacking of building components,” the studio explained.

A large garage and utility areas are housed behind stone-filled gabion walls, which will gradually disappear behind greenery intended to lend this elevation a softer and more natural aesthetic. 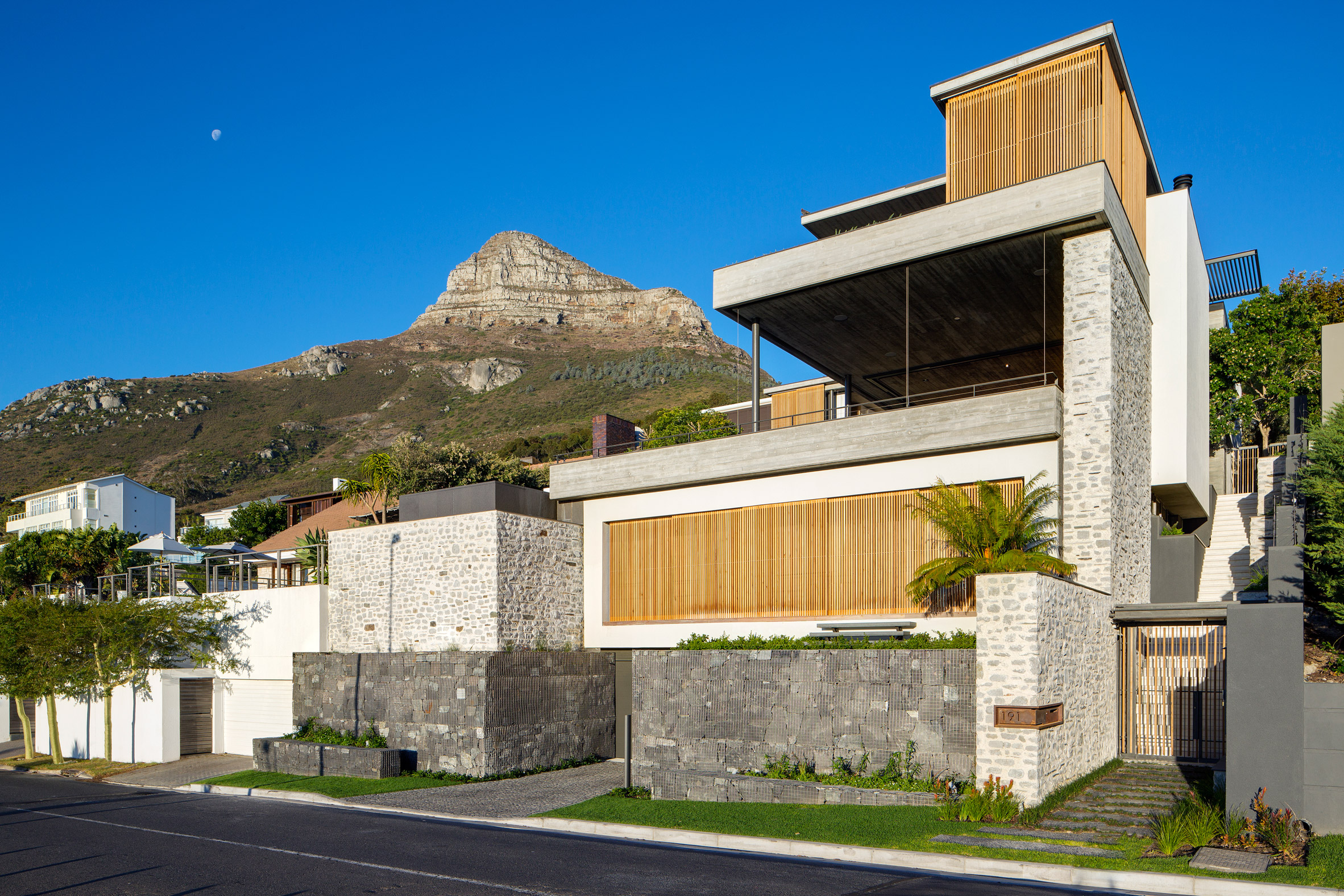 A guest apartment is accommodated above the gabion walls on the first floor, where a slatted cedar wall shields a window that looks out across the road to the sea beyond.

The two storeys above the garage and guest apartment are compartmentalised into three concrete volumes described as “boulder-like objects perched on the hillside”.

These cast-concrete forms housing the main living areas and bedrooms are connected by a double-height atrium containing a staircase and lift. 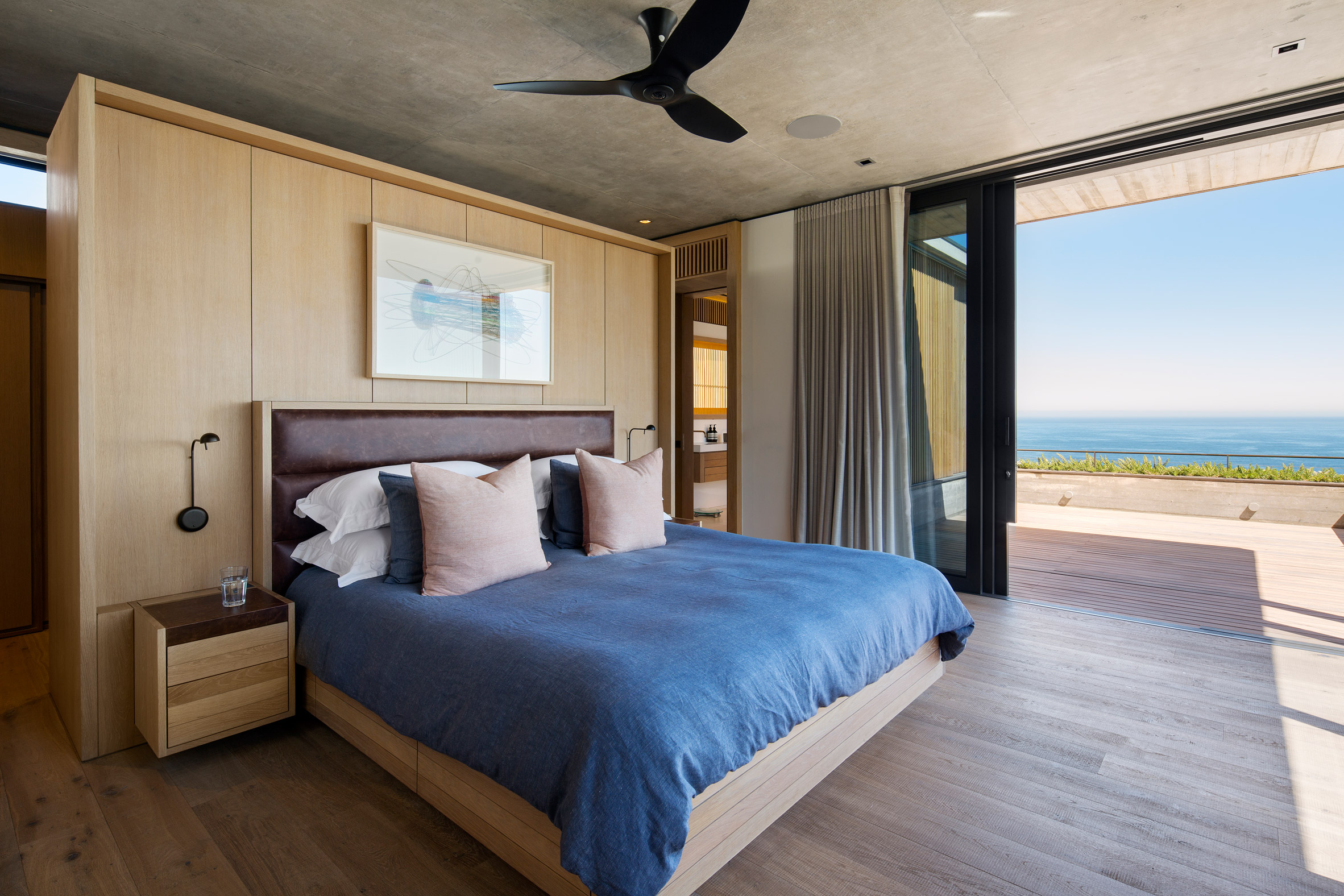 Glazed boxes wrapped in cedar shutters at either end of the uppermost floor enclose bathrooms that glow from within at night.

Sliding walls allow bedrooms on the top floor and the living and dining areas below to be opened up to outdoor spaces that optimise the site’s northern exposure, as well as providing views of the sea. 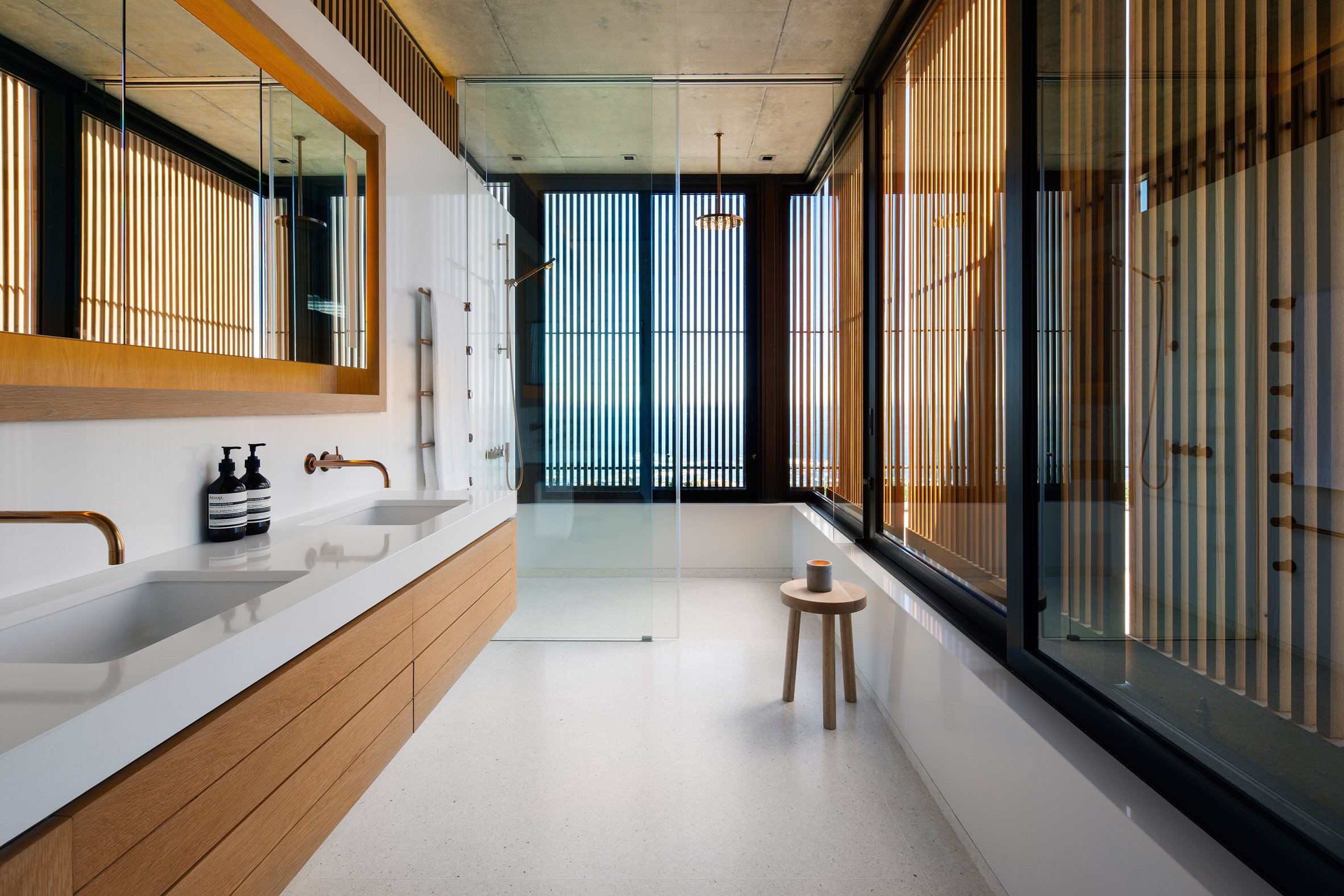 The overhanging roof sections protect the interiors from unwanted solar gain, while automated screens drop down to shade the glazed facades when required.

Stepping stones lead from the kitchen across a pond towards a vegetable and herb garden. A mechanically operated sash window lining the atrium can be raised to allow cooling breezes to reach the interior during summer. 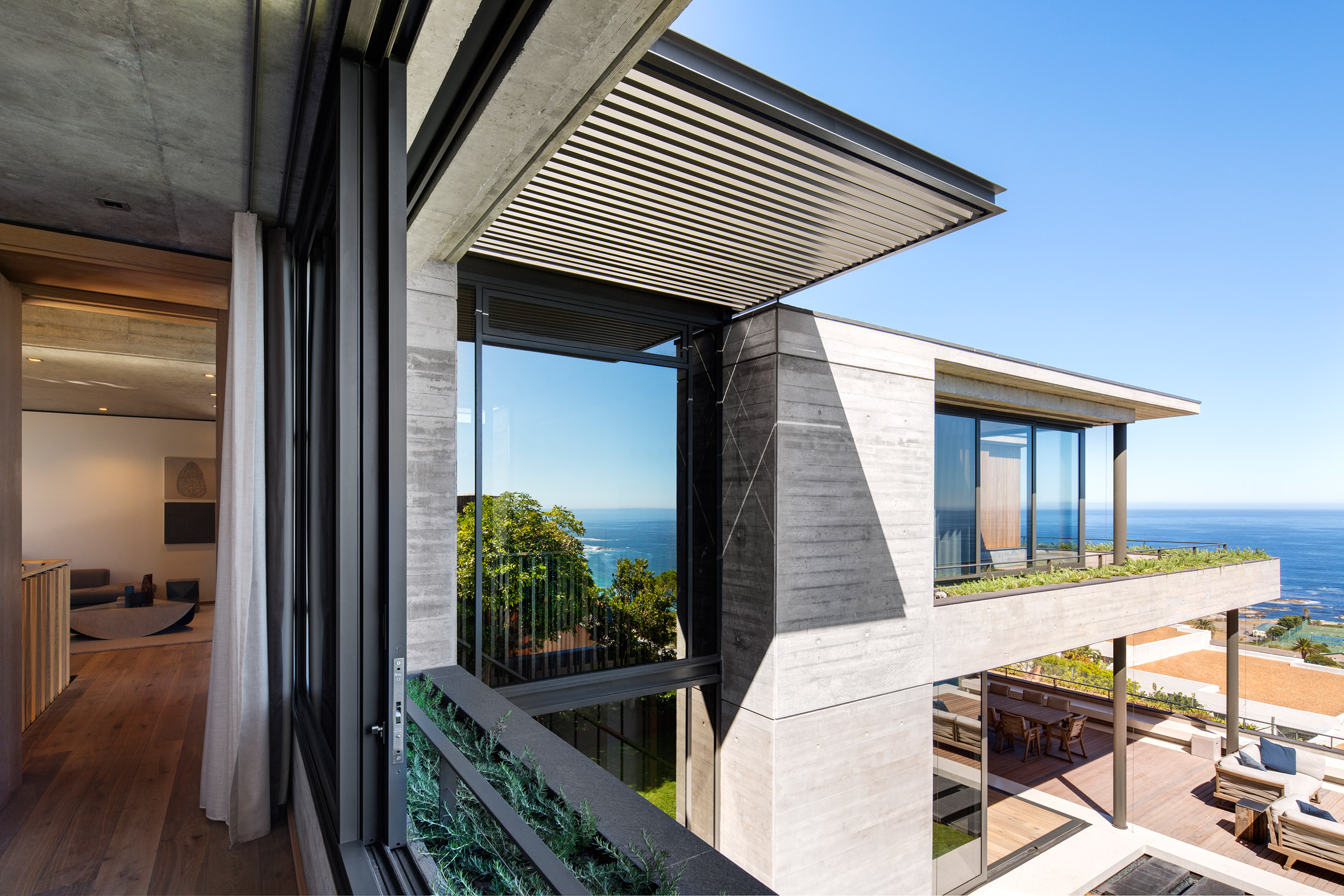 A material palette including concrete, local stone, untreated cedar, rough-sawn oak flooring, terrazzo and pre-weathered steel was chosen to provide the house with a character that will alter gradually over time.

Malan Vorster is based in Cape Town’s trendy Green Point neighbourhood and has previously designed a treehouse-like retreat comprising four cylindrical towers raised on stilts in the city’s Constantia suburb. 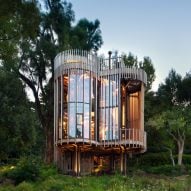