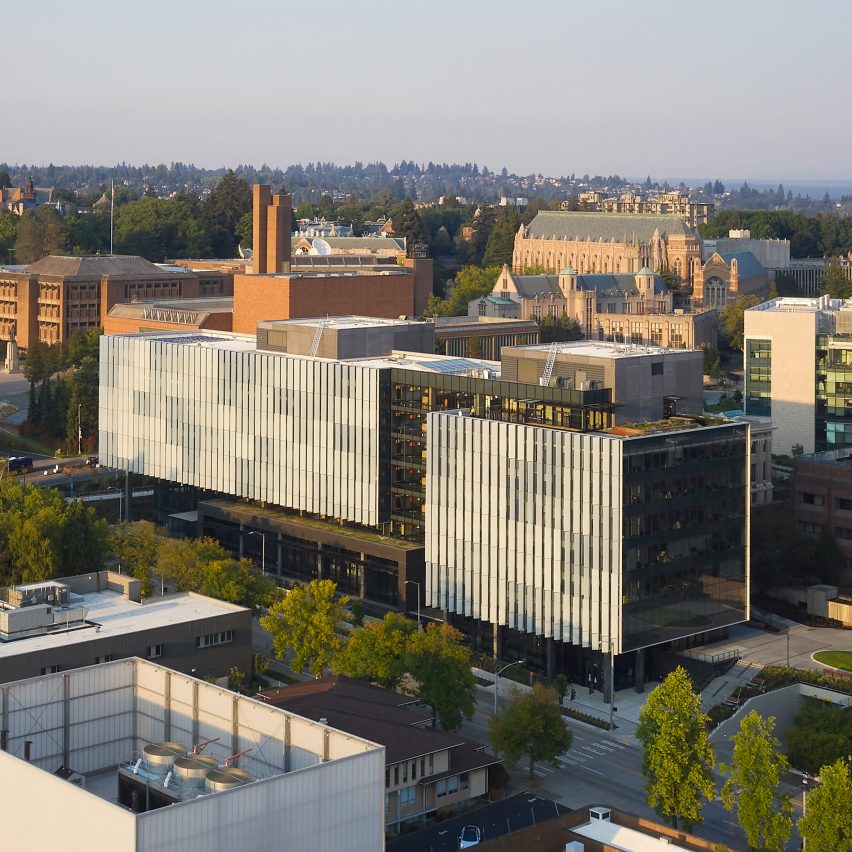 Shading devices help reduce glare at The Rosling Center, a research facility focused on public health designed by architecture firm The Miller Hull Partnership for the University of Washington.

The building – officially called The Hans Rosling Center for Population Health – is located on the University of Washington (UW) campus in central Seattle.

Set on a gently sloping site, the eight-storey facility encompasses 300,000 square feet (27,870 square metres). It sits between the university’s historic core, which dates to the 19th century, and an emerging innovation district.

The centre is named after Hans Rosling, a Swedish physician and professor who promoted a data-driven approach to improving human health.

Designed by local firm The Miller Hull Partnership, the interdisciplinary building is designed to accommodate those studying critical global issues such as poverty, healthcare access, climate change and Covid-19.

The project was made possible by a $210 million gift from the Bill & Melinda Gates Foundation, along with funding from the university and state legislature.

“It will serve as a central hub for faculty, researchers and students to work together with local and global partners to address some of the world’s most significant challenges across three key areas – human health, environmental resilience, and social and economic equity,” said The Miller Hull Partnership.

Rectangular in shape, the building was partly carved away at the ground level to form a large covered porch and urban stair, the team said.

Several different treatments were used for the facades, depending upon their sun exposure and the surrounding context. On the west elevation, a glazed wall features glass louvres that are nearly a metre deep.

“Three-foot-deep glass fins provide a dynamic shade and shadow composition that protects occupants from west sun and glare,” the team said. “Though physically static, the fins act as a canvas for changing light conditions throughout the day.”

The eastern facade, which faces the historic campus, also has a glass wall and fins, along with custom, precast concrete panels.

The shading devices are more subdued on this side to help the building blend with its neighbours. Moreover, an aggregate that matches nearby buildings was used for the concrete panels.

“The building both defines and responds to its context,” said Ruth Baleiko, the project design at Miller Hull.

“We looked for ways to build upon the physical and social structures of the site and leverage those elements in conjunction with environmental conditions to create a building that is, as much as possible, of its place.”

Inside, the layout is intended to be flexible and to foster interactivity. The ground level holds classrooms and social areas, while the upper levels contain workspaces and collaboration areas.

On the ground floor, multiple entrances, or “front doors”, create a welcoming atmosphere and provide an immediate visual connection to public spaces.

“A set of four office types cater to various working styles and are organised as a collection of neighbourhoods, which breaks down the scale of each floor and democratises access to daylight, views and fresh air,” the team said.

The building has a number of sustainable elements, including a high-performing facade, operable windows, ample daylight, low-flow fixtures and a rainwater collection system. The project aims to achieve LEED Gold certification from the US Green Building Council.

The Rosling Center is the first and largest integrated design-build project that has been completed on the UW campus, according to the team. Miller Hull worked on the project with Lease Crutcher Lewis, a Settle-based contractor.

The departments housed at the centre include the Institute for Health Metrics & Evaluation (IHME), the UW Department of Global Health, parts of the UW School of Public Health, and the offices of the UW Population Health Initiative. All of them have played some type of role in the response to the coronavirus pandemic.

The Miller Hull Partnership was started in 1977 by David Miller and Robert Hull. Other projects by the firm include a fire station on Washington’s Mercer Island that has large bi-fold glass doors, enabling a quick exit for emergency trucks.

Photography is by Kevin Scott.