Evelop Arquitectura has created a white hillside house where glazing fully opens onto lavender bushes and a verdant garden, against the backdrop of central Mexico’s rolling terrain.

House S1 is situated in the hills of Zibatá, a small city in the central Mexican province of Querétaro. 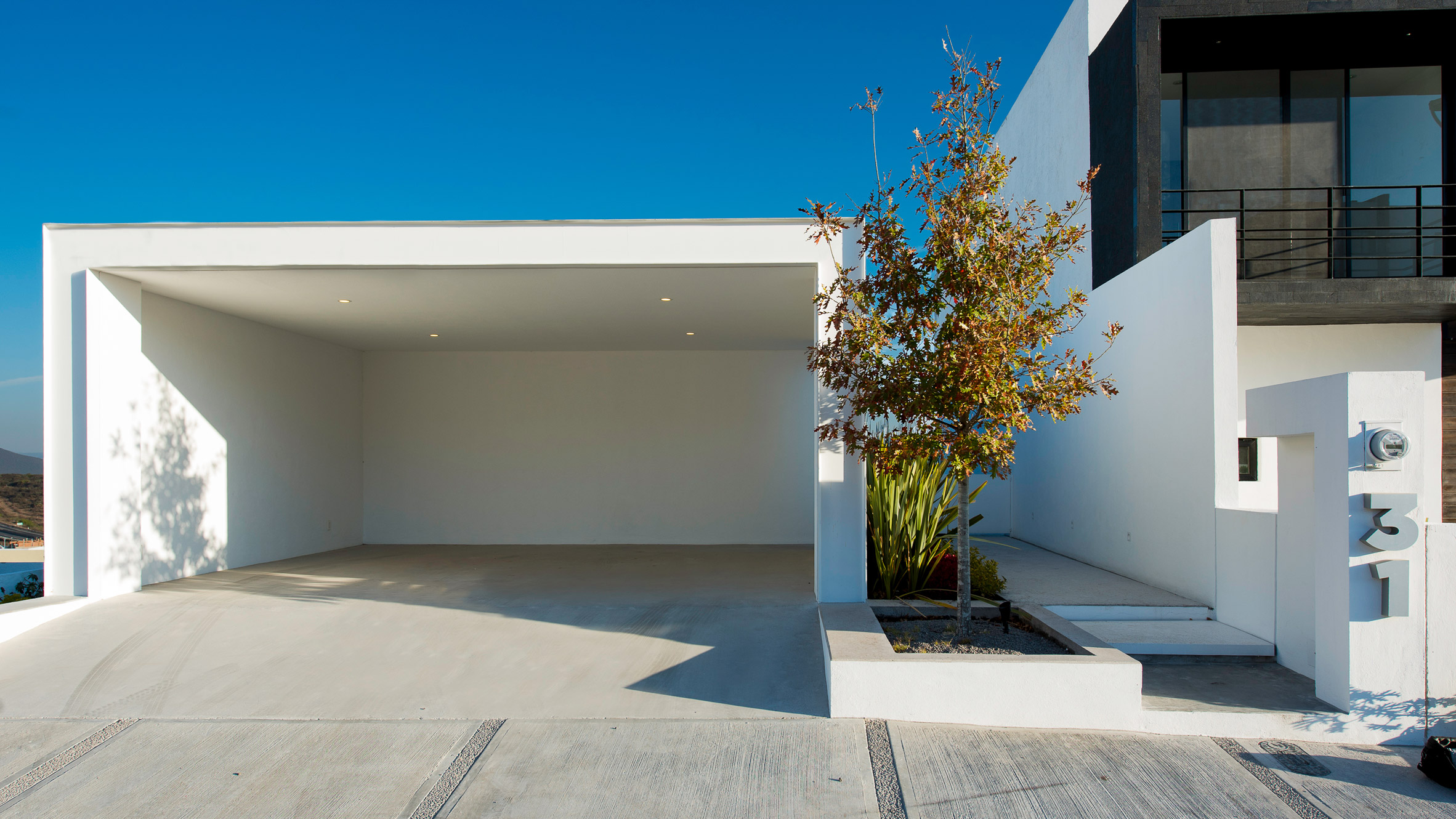 Recessing the two-storey residence into an incline, the Mexican architects sought to “orient the home so as to take full advantage of the site’s vantage point as the most important priority in the design process”.

Evelop Arquitectura divided the programme between the two levels. The entranceway and the master bedroom occupy the upper storey, while the lower floor accommodates a communal space and service rooms. 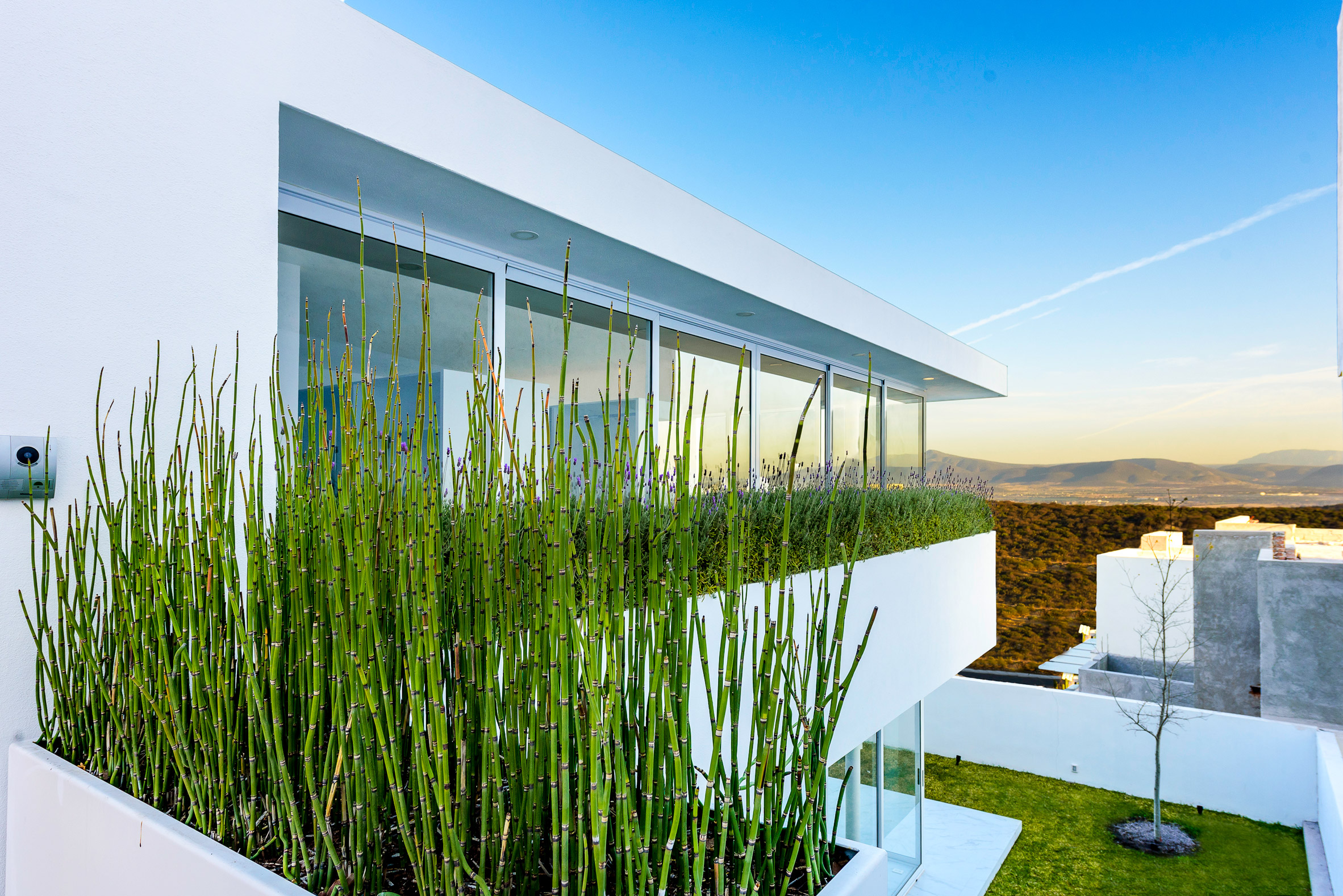 “There are two basic themes that unfold across the space,” the architects said. “The first is the intimacy of the private space, and the second is the openness of the social area.”

A street-facing garage on the hill’s crest takes up roughly a third of the top volume. The hollowed-out space introduces the interplay between white, concrete surfaces and expansive apertures found across the residence. 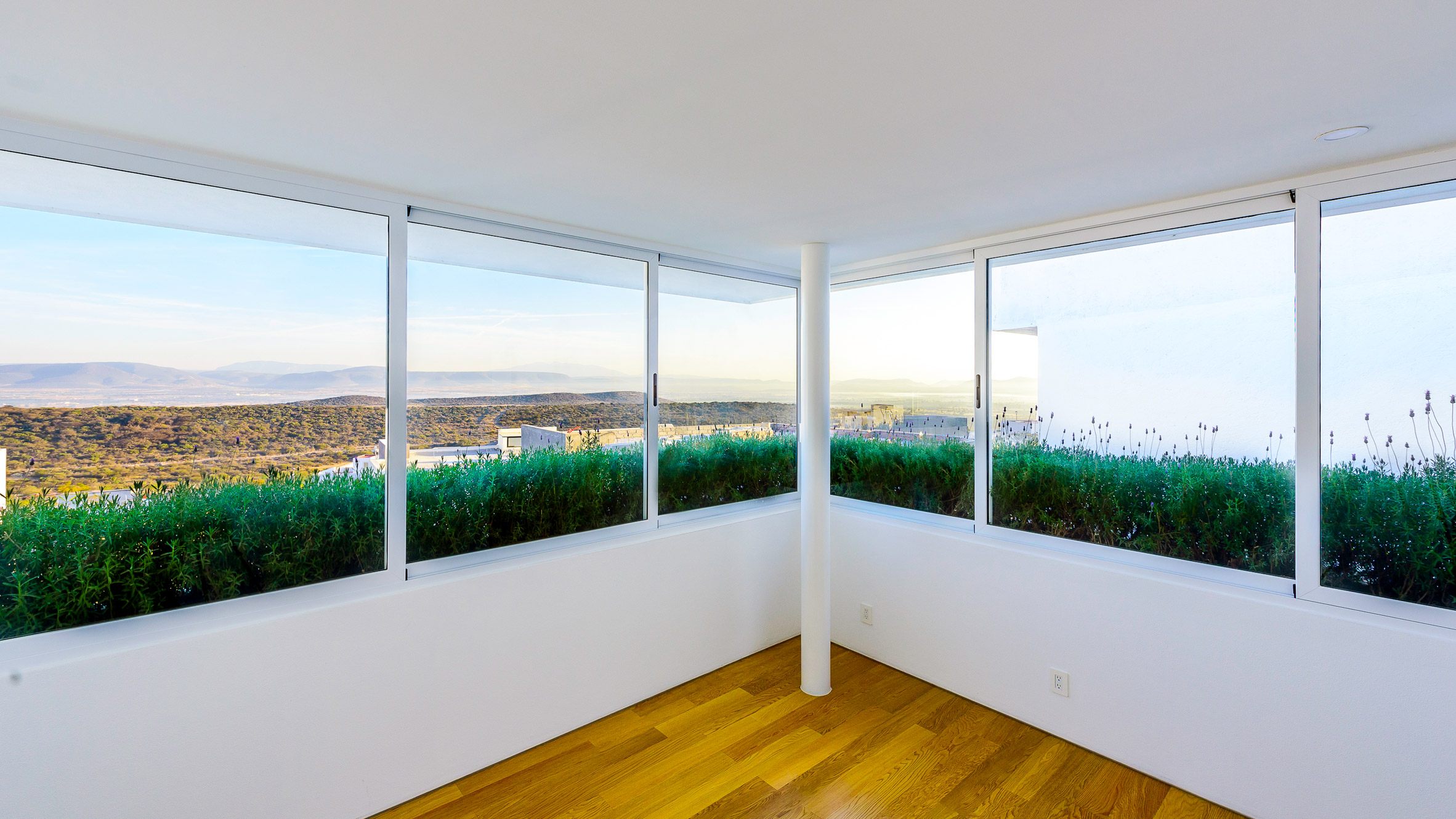 A vestibule situated behind the garage stretches along the master suite, connecting the entrance to a passage down to the lower volume.

Before sharply turning into the basement, the staircase descends towards a large window looking out onto to a strip of greenery and the scenery beyond. 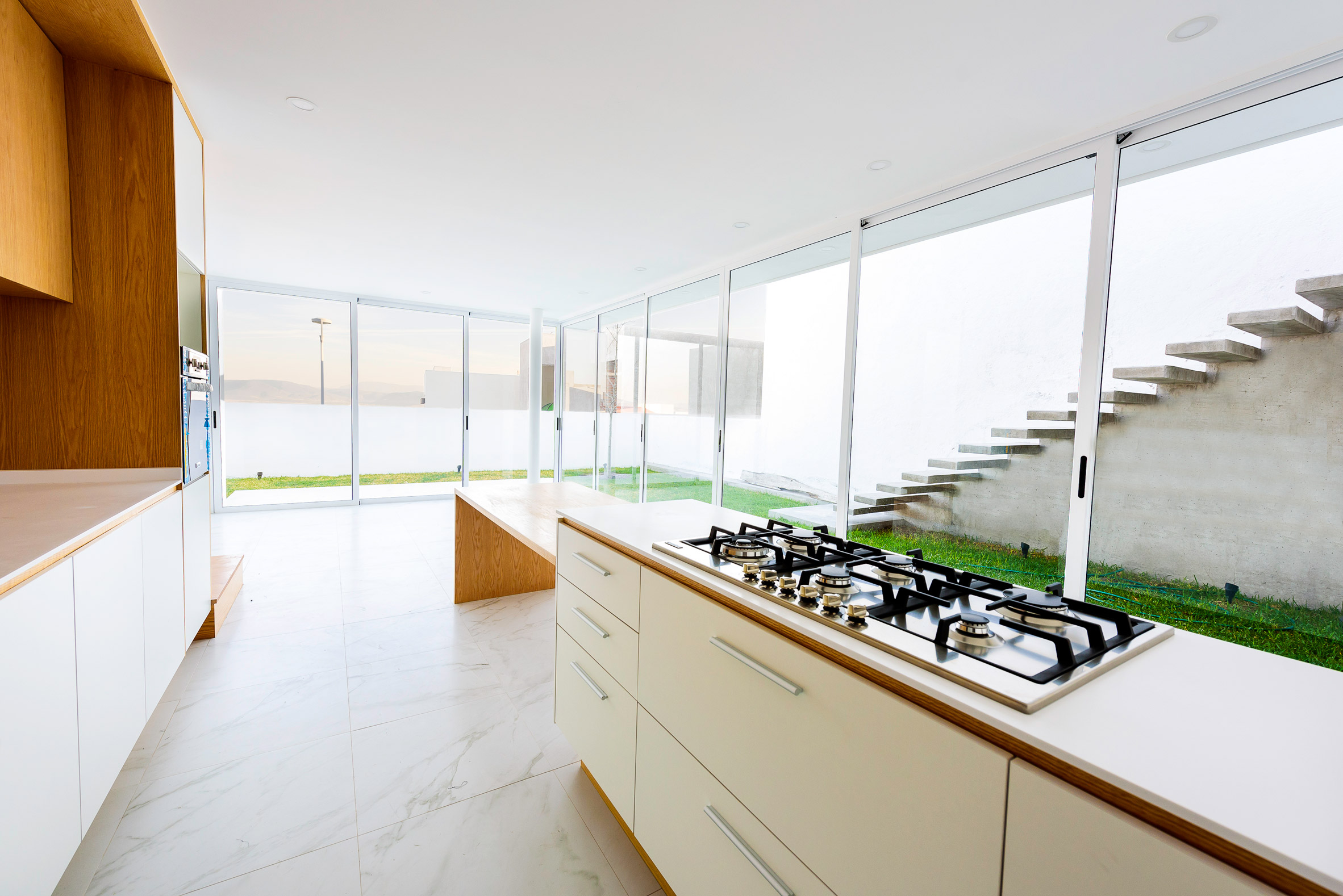 “The lobby and interior passage conduct visitors with surprise,” the architects said. “Whether it is to the adjacent master bedroom or to the staircase, which leads down to the social area along a framed view of the amazing landscape.”

From the road, a pathway striding the east edge of the property provides access to the building and serves as a landing. 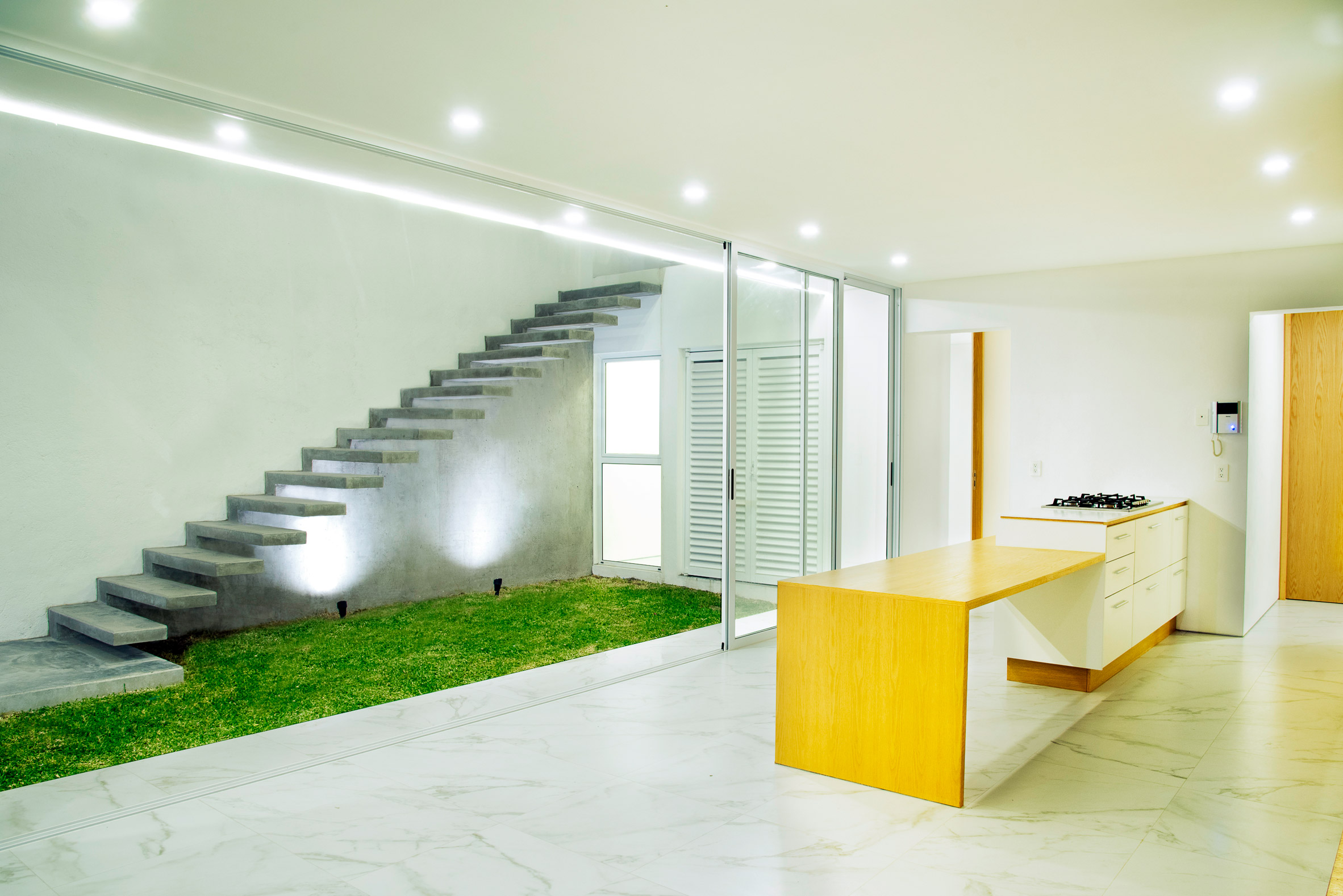 An exterior, floating staircase extends the walkway down to the lower garden, which wraps around the lower floor plan.

It is arranged parallel to the interior flight of stairs, and offers a similar view down the hill. 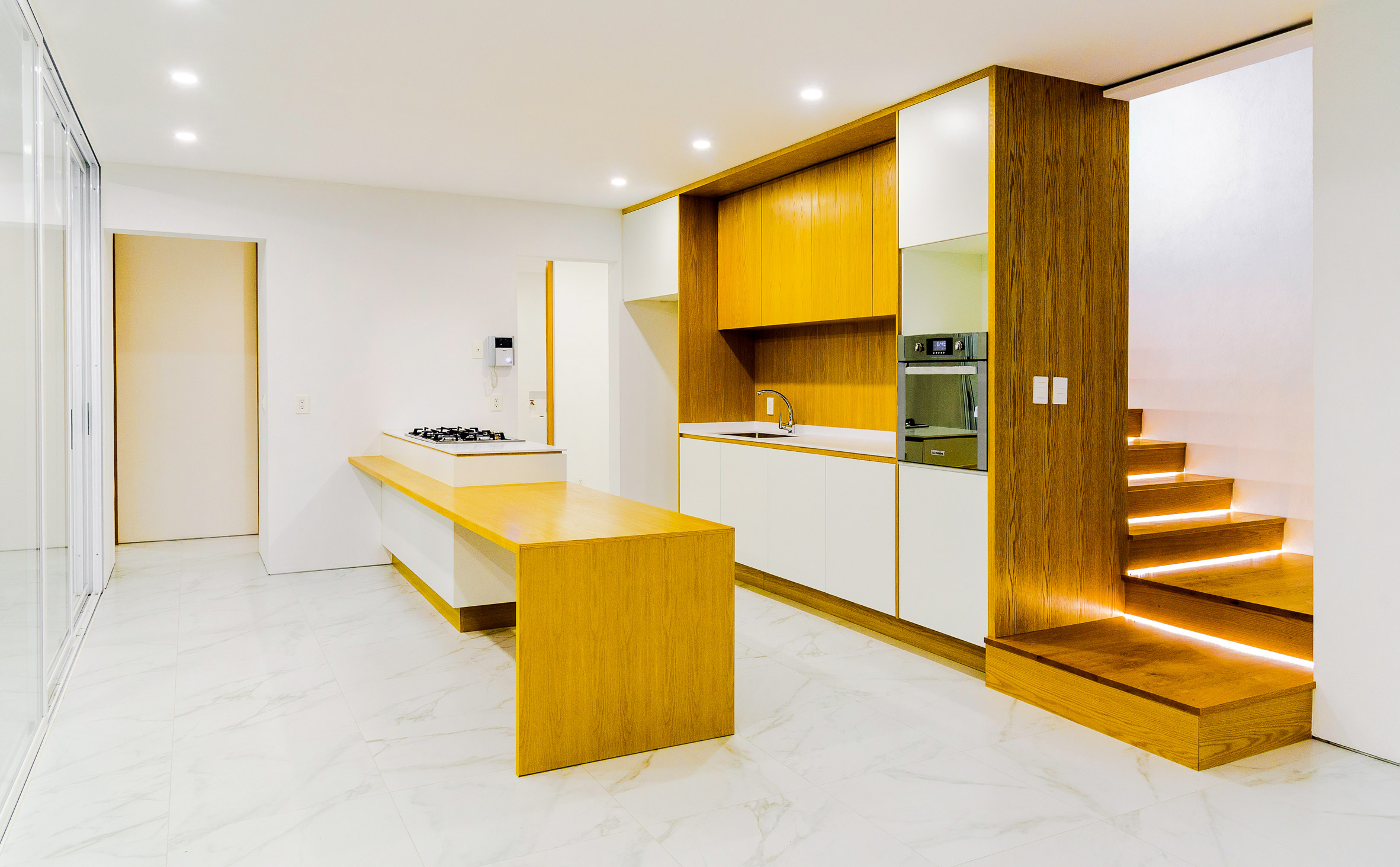 Evelop Arquitectura allocated the social spaces to the lower volume, where a combined lounge, dining room and kitchen take up a rectangular space.

The rear wall conceals a spare bedroom, a bathroom and several service rooms that encompass the area beneath the atrium and garage. 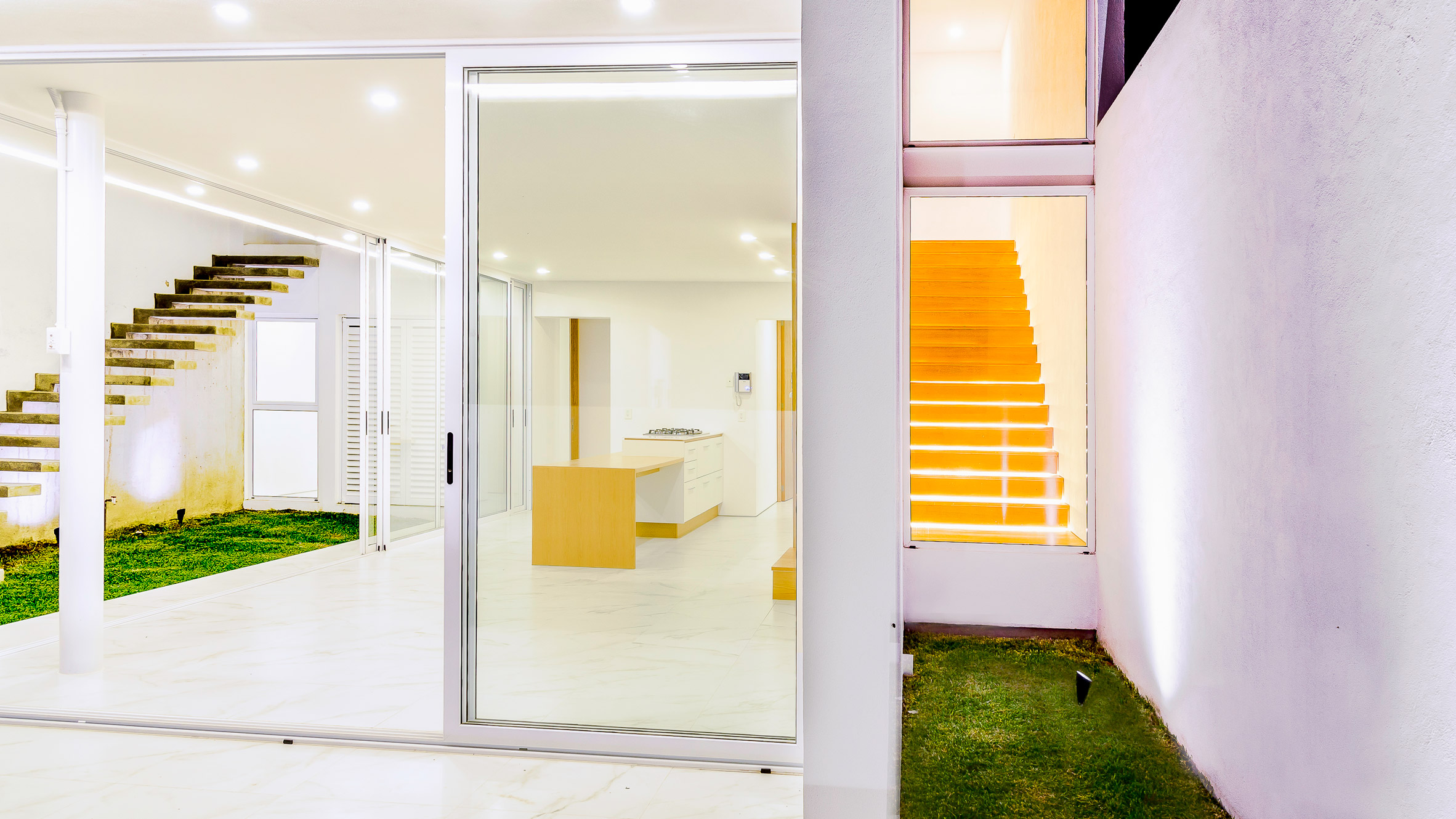 The open lounge and dining area features floor-to-ceiling glass panes that wrap around the room. Aiming to strengthen the connection to the scenery, the firm designed the glazing to slide open completely onto the terrace and surrounding garden.

“This area contains wide spaces that promote the absolute coexistence with a sensation of openness and incredible views of the landscape,” said the firm. 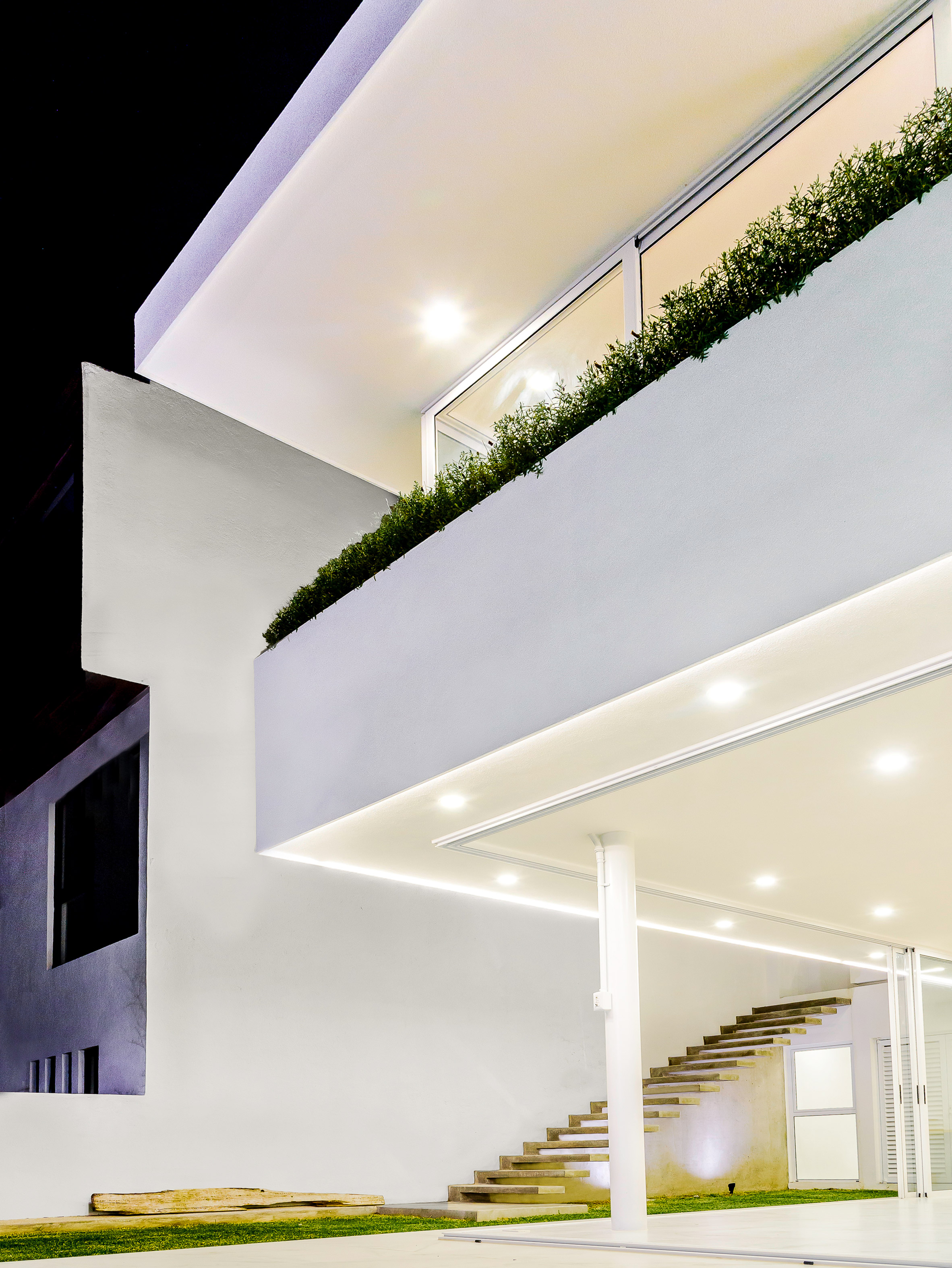 Retractable glass panels also wrap around the bedroom above, opening onto lavender bushes planted outside the windows.

“Sliding windows allow access of natural light and cross ventilation, producing a harmonious ambience,” the architects said. “A surrounding window planters are filled with lavender that generates more privacy, as well as visual continuity with the landscape, while diffusing pleasant, natural scents within the space.” 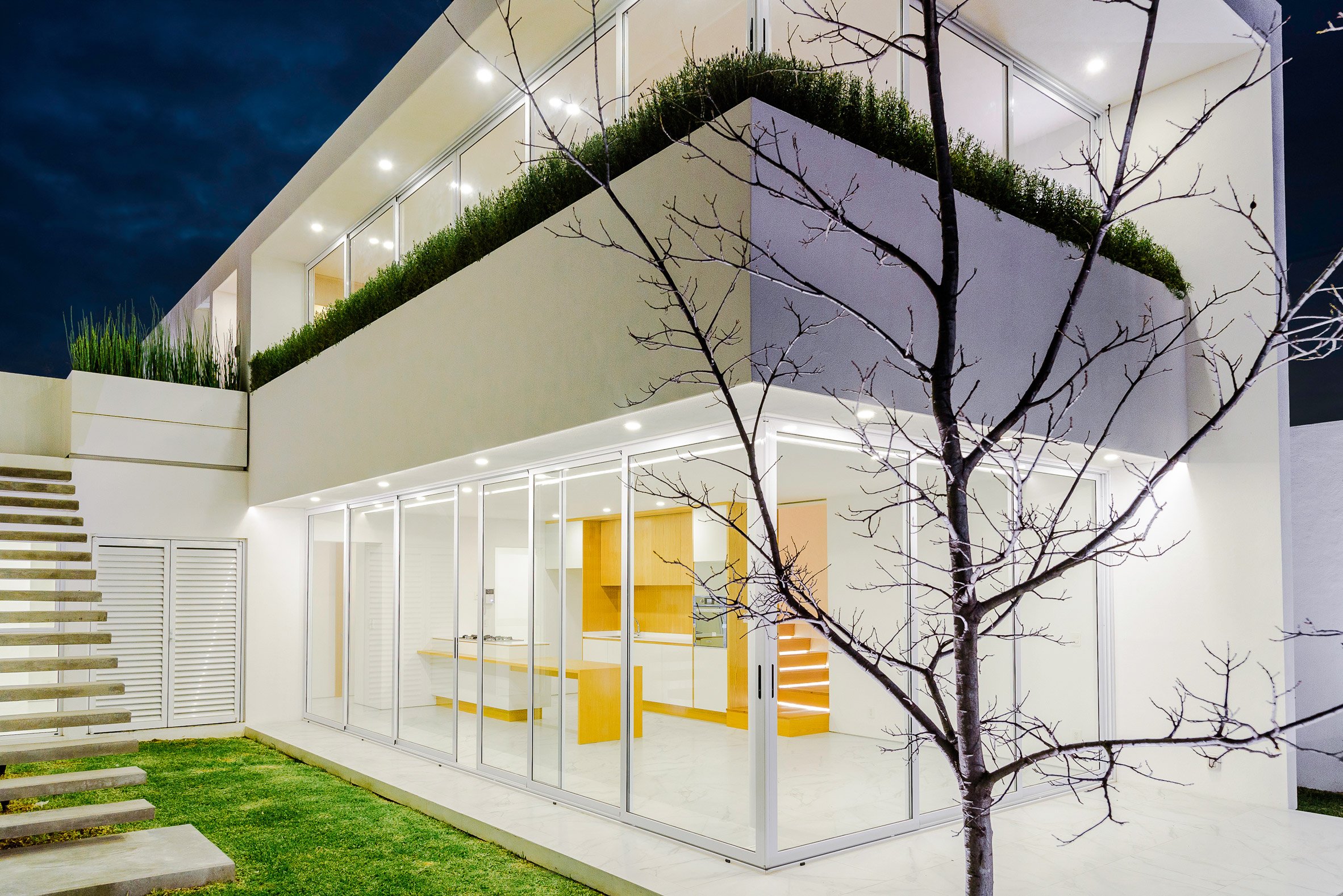 Instead of wall to divide the suite, a walk-in closet partitions the bathroom by the entrance from the bedroom perched at the edge of the volume.

Different flooring materials also help to visually define the spaces across the house. 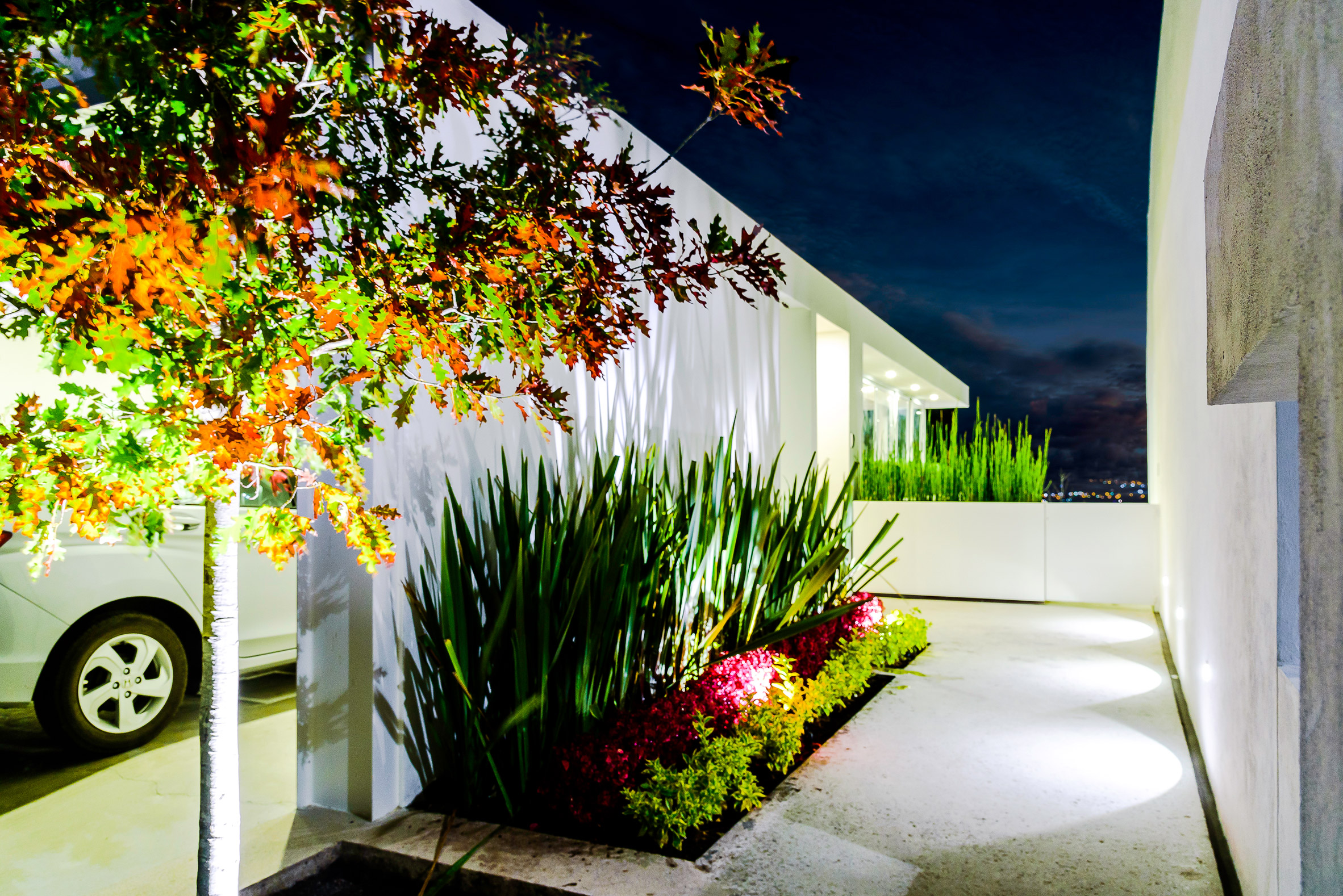 Oak wood in the bedroom was intended to “create a warmer and more welcoming feeling”, while white marble across the lower storey “generates the sensation of a fresh, wide and illuminated space”.

Viewed from the north facade, the structure is unified by L-shaped glazing wrapping around both levels. The architects tied this visually to the L-shaped concrete wall, beginning with the garage’s east facade and extending along as the thin roof topping the home. 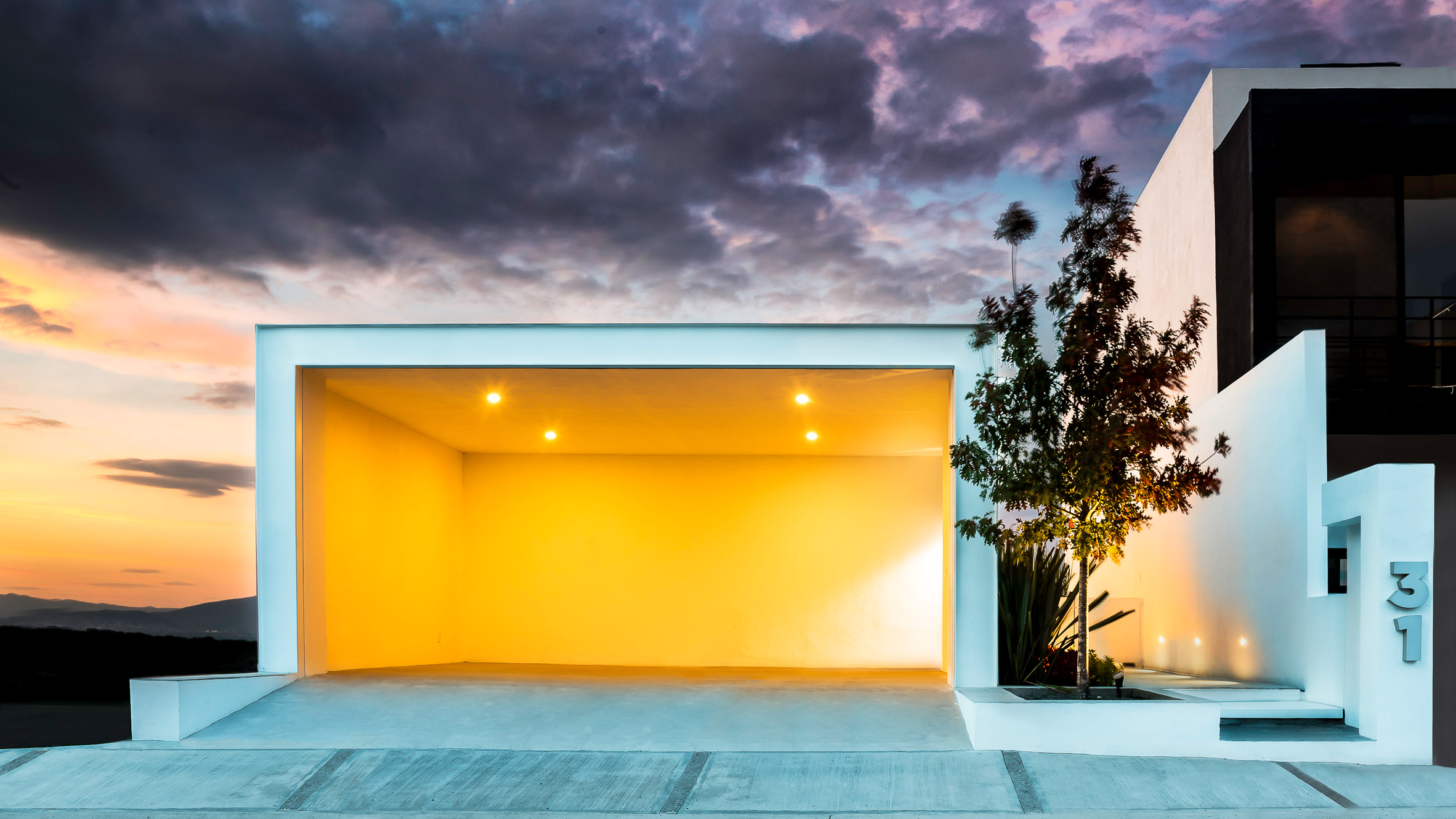 “We sought to create functional spaces that maintained order and visual continuity through a simple diagram of two horizontal crystal ‘L forms’, and a vertical ‘L form’ made of concrete,” said the architects.

Several other Mexican houses are perched among mountain ranges that span much the country’s length, include Tatiana Bilbao’s Ventura House that seems to “grow organically” out of forested hillside, and a stone and concrete retreat at the foot of a mountain.

Photography is by Andrés Mondragón Padilla. 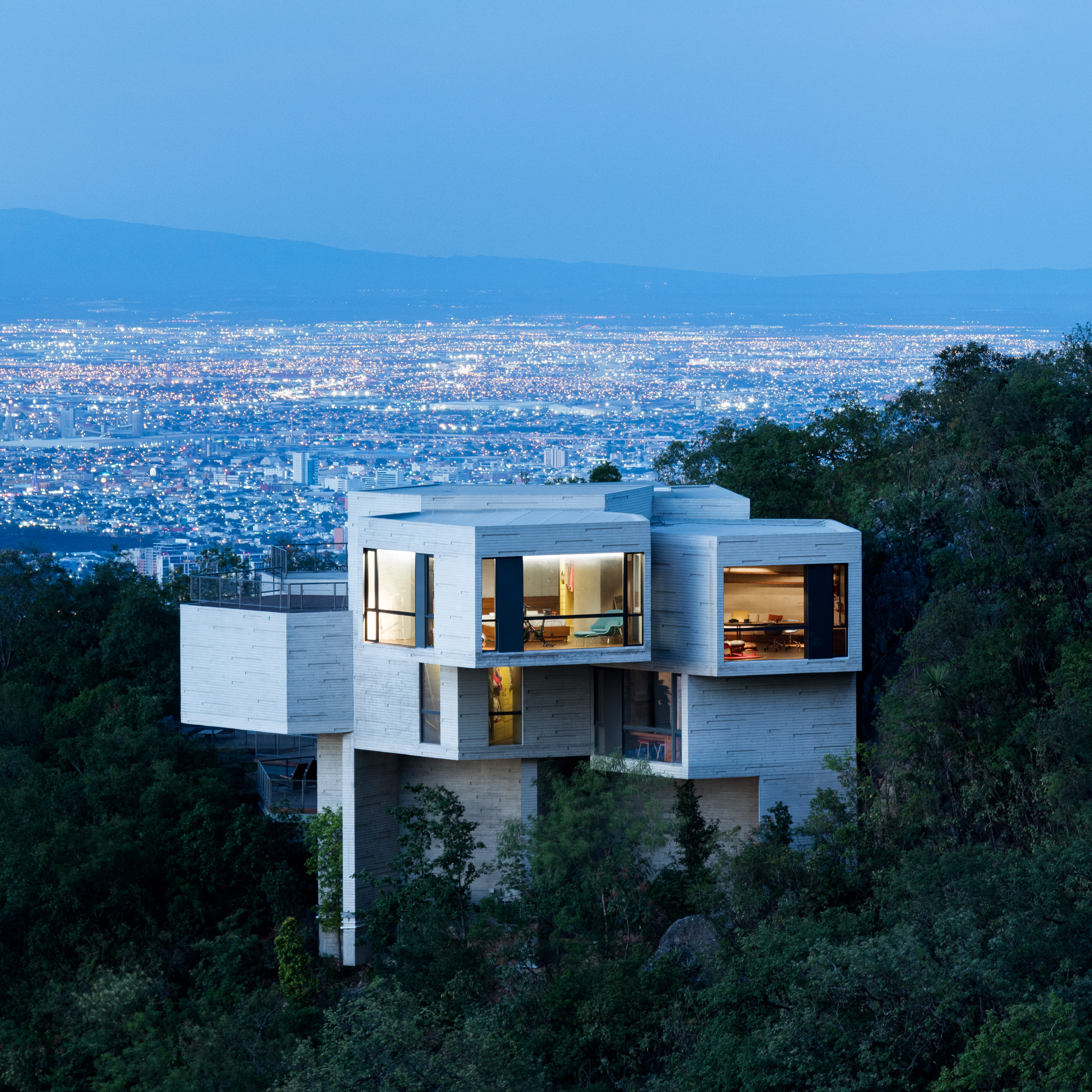