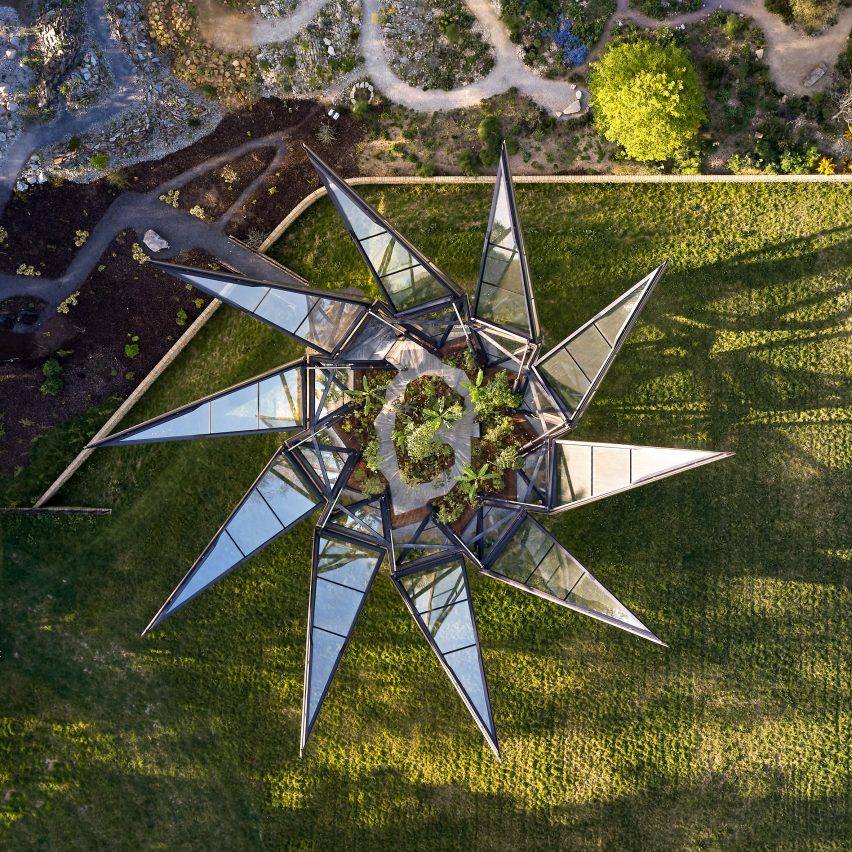 Victorian terrariums informed the design of the Glasshouse, a sculptural and kinetic greenhouse that Thomas Heatherwick‘s studio has created on the historic Woolbeding Estate in England.

Built for heritage charity National Trust, the conservatory in West Sussex has a pyramidal 10-sided form that opens out like a crown to reveal a variety of subtropical trees and shrubs.

It was created by London-based Heatherwick Studio as a focal point for the Silk Route Garden, a new outdoor space in the National Trust’s Woolbeding Gardens at Woolbeding Estate that dates back to the 18th century.

“This is a place and a project that literally unfolds,” said the studio’s founder Thomas Heatherwick. “You step through this bewitchingly beautiful garden and discover an object that starts like a jewel and ends like a crown, as the Glasshouse slowly unfurls.”

The Silk Route Garden that surrounds the Glasshouse has been curated as a 12-step journey that showcases the Silk Road – an ancient network of trading routes between Europe and Asia – and its influence on British horticulture.

Plant species introduced to Britain via the route fill the structure, including a rare Aralia Vietnamensis tree and a mix of ferns, umbrella trees, magnolias and bananas.

“It also speaks of our need to keep creating amazing pasts,” added Heatherwick.

“Weaving contemporary inventions into the fabric of historic settings and having the confidence to let each one speak to the other.”

The Glasshouse was developed by Heatherwick Studio in collaboration with The Woolbeding Charity and the National Trust.

It is composed of ten steel components that support angled glass panes and were designed to resemble the sepals on flowers that provide protection for flower buds.

According to the studio, its design references ornamental Victorian terrariums, a type of sealable container made from glass and filled with soil and plants.

On warm days, the “sepals” of the greenhouse open out to create a 141-square-metre space in the shape of a crown. This uses a hydraulic mechanism developed with structural engineers Eckersley O’Callaghan, which relies on liquid under pressure and moving in a confined space. 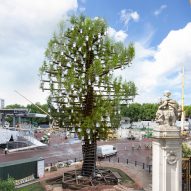 This opening process, which takes four minutes, is engineered to expose the subtropical plants to sunshine and ventilation. The structure remains close in cooler weather.

Surrounding the sculpture is a winding path, which is lined with 300 species of plants from twelve distinct regions of the Silk Road.

The Glasshouse joins a water feature designed by British sculptor William Pye and a neoclassical folly by British architect Philip Jebb on the site.

Heatherwick Studio is a London-based architecture and design studio founded by Heatherwick in 1994.

The studio often integrates trees and plants into its projects, such as the Tree of Trees sculpture outside Buckingham Palace in London.

Larger scale examples include the 1,000 Trees project in Shanghai and the EDEN skyscraper in Singapore.

The photography is by Hufton + Crow unless stated otherwise.