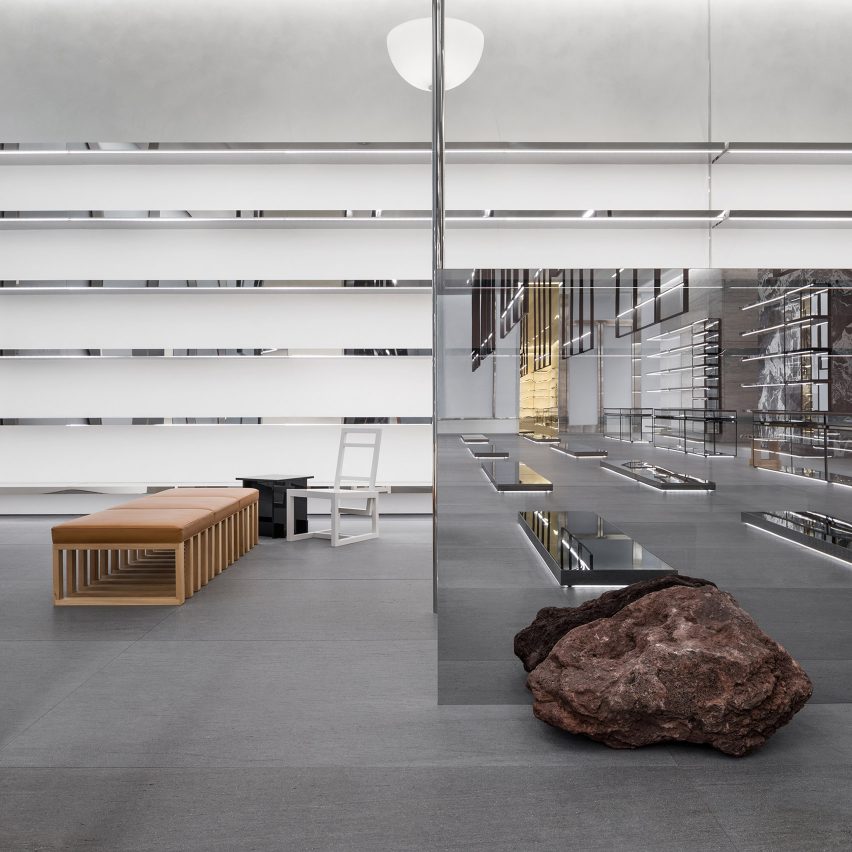 Hedi Slimane has developed a new visual identity for the stores of fashion label Celine, redesigning its New York, Paris, Tokyo and LA locations with steel, marble, and mirrored interiors.

The change comes as part of an ongoing rebrand being carried out Slimane, following his controversial decision to drop the accent from the label’s logo.

All of the new stores will be decked out with natural stone surfaces, reflective fixtures and site-specific artworks.

In the Celine branch on New York’s Madison Avenue, which was the first store to undergo an overhaul, grey basalt has been applied to the floors. Chunky structural columns that seem to burst through the ceiling have then been clad with panels of veiny black marble, reclaimed oakwood, and gold-hued brass.

Polished stainless steel has been used to craft horizontal shelves that line the peripheral walls and low-lying plinths, which have been fitted with LEDs so as to appear to hover above the ground.

Pieces can also be displayed inside glass boxes or hung from one of the rectangular black frames that are suspended above.

At the centre of the space sits a sculpture by British artist James Balmforth, featuring stacked blocks of stainless steel, while craggy rocks prop up mirrored panes.

Although completed in the same material palette, the Celine branch in Paris’ Grenelle neighbourhood has a house-like layout.

The Celine store on Tokyo’s renowned shopping avenue Omotesandō has been revamped to feature a white sweeping staircase, and a snake-like sculpture comprised of gold metal scales that hangs down from the first floor through a central void.

Branches in Los Angeles and New York’s Soho have also been redesigned, soon to be followed by Celine locations across the globe.

Slimane was appointed as Celine’s creative director in February 2018, replacing designer Phoebe Philo who had been at the brand’s helm since 2008. He previously headed up Yves Saint Laurent and back in 2014 refurbished the fashion brand’s store on London’s Sloane Street, which he also decked out with marble and mirrors.

Celine isn’t the only high-end fashion label undergoing some changes – at the beginning of this year, Calvin Klein announced that it would be closing its Raf Simons-designed New York flagship store, following news that Simons is leaving the brand as creative director.