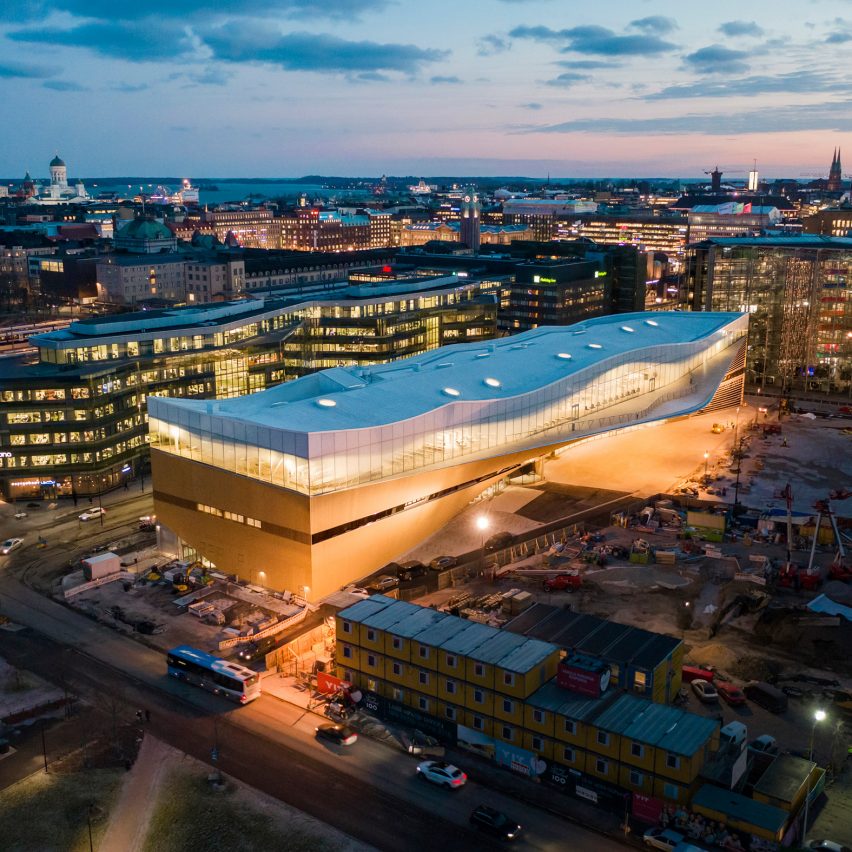 The Helsinki Central Library Oodi, designed by ALA Architects, is topped with large open-plan reading room under an undulating roof punctured by circular skylights.

Finnish studio ALA Architects‘ design for the country’s flagship library, which stands opposite the Finnish Parliament, aims to “embrace technology and progressive values to provide a variety of innovative services alongside its lending collection of books.”

In fact, the 17,250-square-metre building contains a relatively small number of books – around 100,000 – with the majority of space dedicated to public amenities including a cinema, recording studios, a maker space, and areas for hosting exhibitions and events. 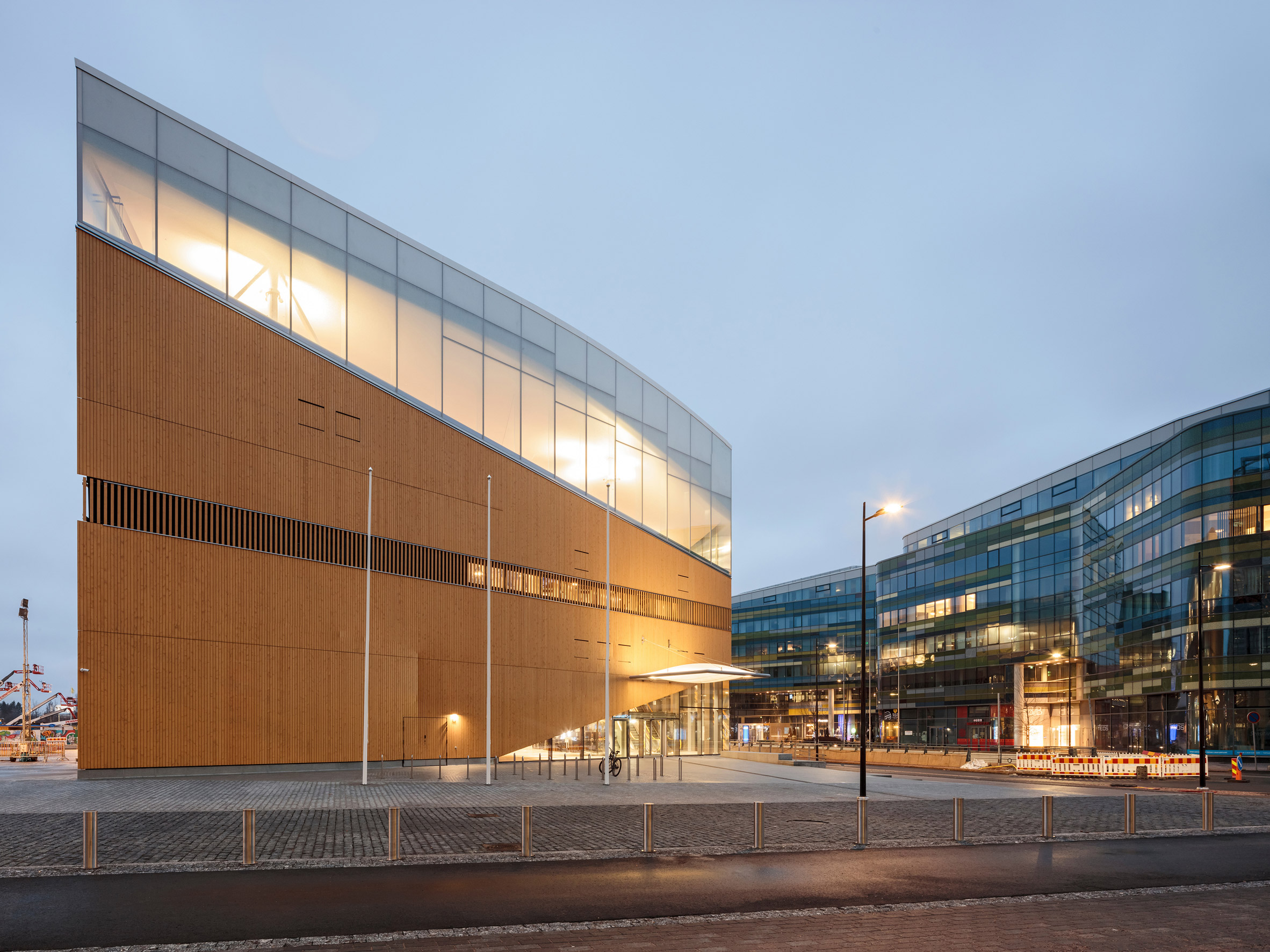 An existing facility in the neighbourhood of Pasila remains Helsinki’s main lending facility and the administrative centre for the city library.

The new building instead uses online services and book-sorting robots to offer users access to nearly 3.4 million books, which can be delivered to the building. 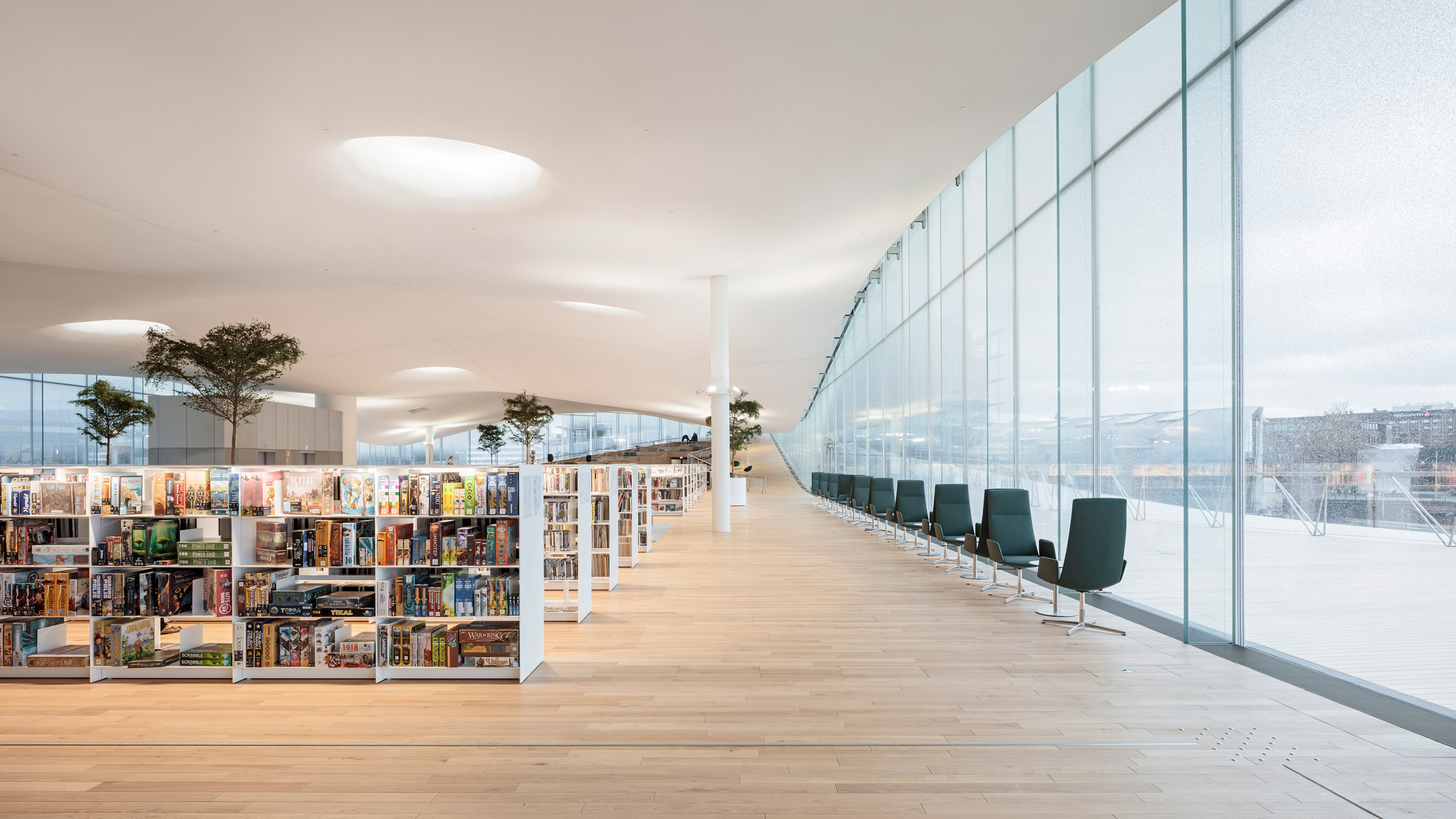 The €98 million (£88 million) library, which is called Oodi after the Finnish word for “ode”, occupies one of the last undeveloped sites in central Helsinki.

Its location facing the Finnish Parliament is intended to symbolise the relationship between the government and the citizens. 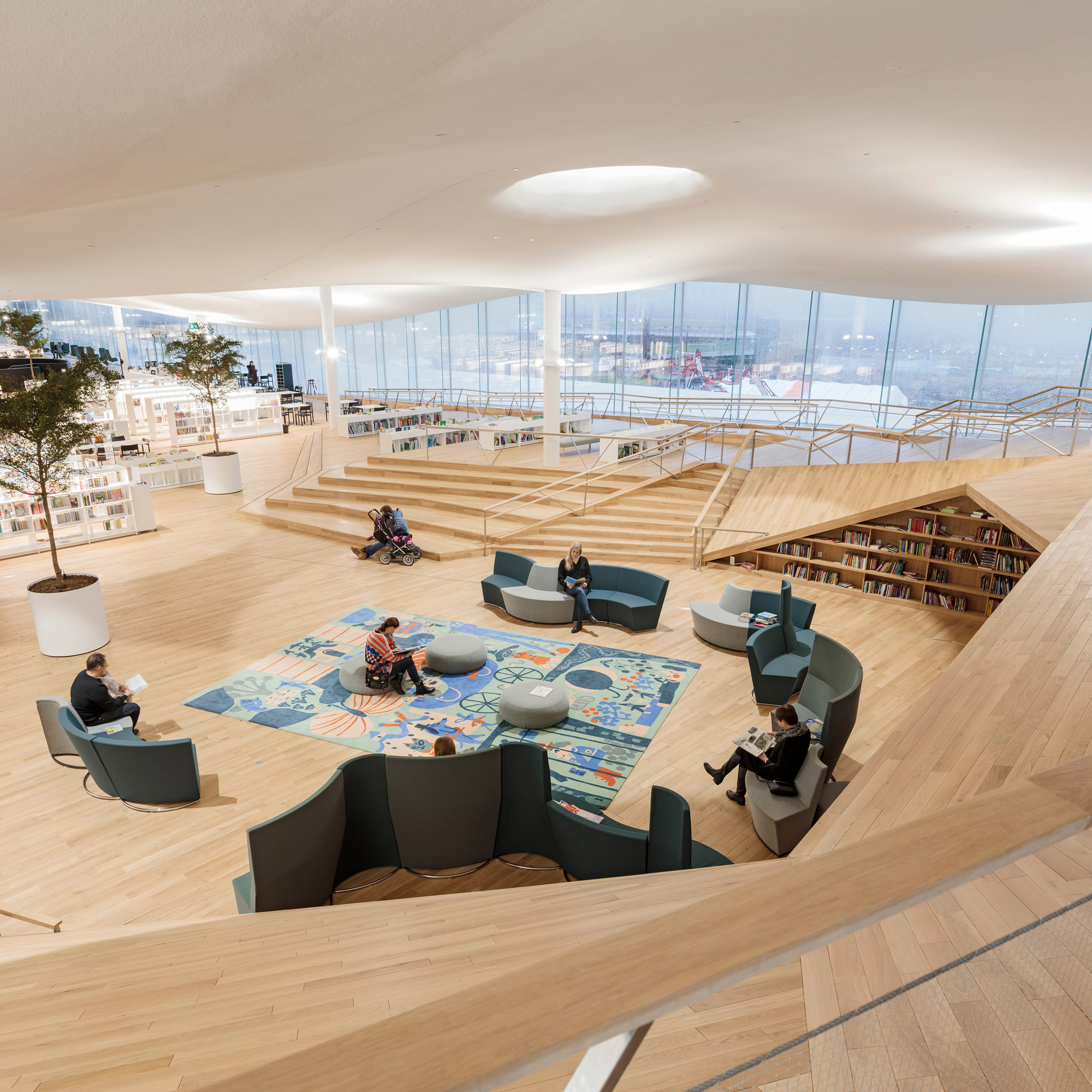 Oodi is situated within the Helsinki Cultural District, which also houses a nearby art museum featuring subterranean galleries topped with angled skylights that project up from the surface of a public courtyard.

The long and narrow site designated for the new library presented some technical challenges, including the need to consider the future construction of a tunnel crossing underneath the building. 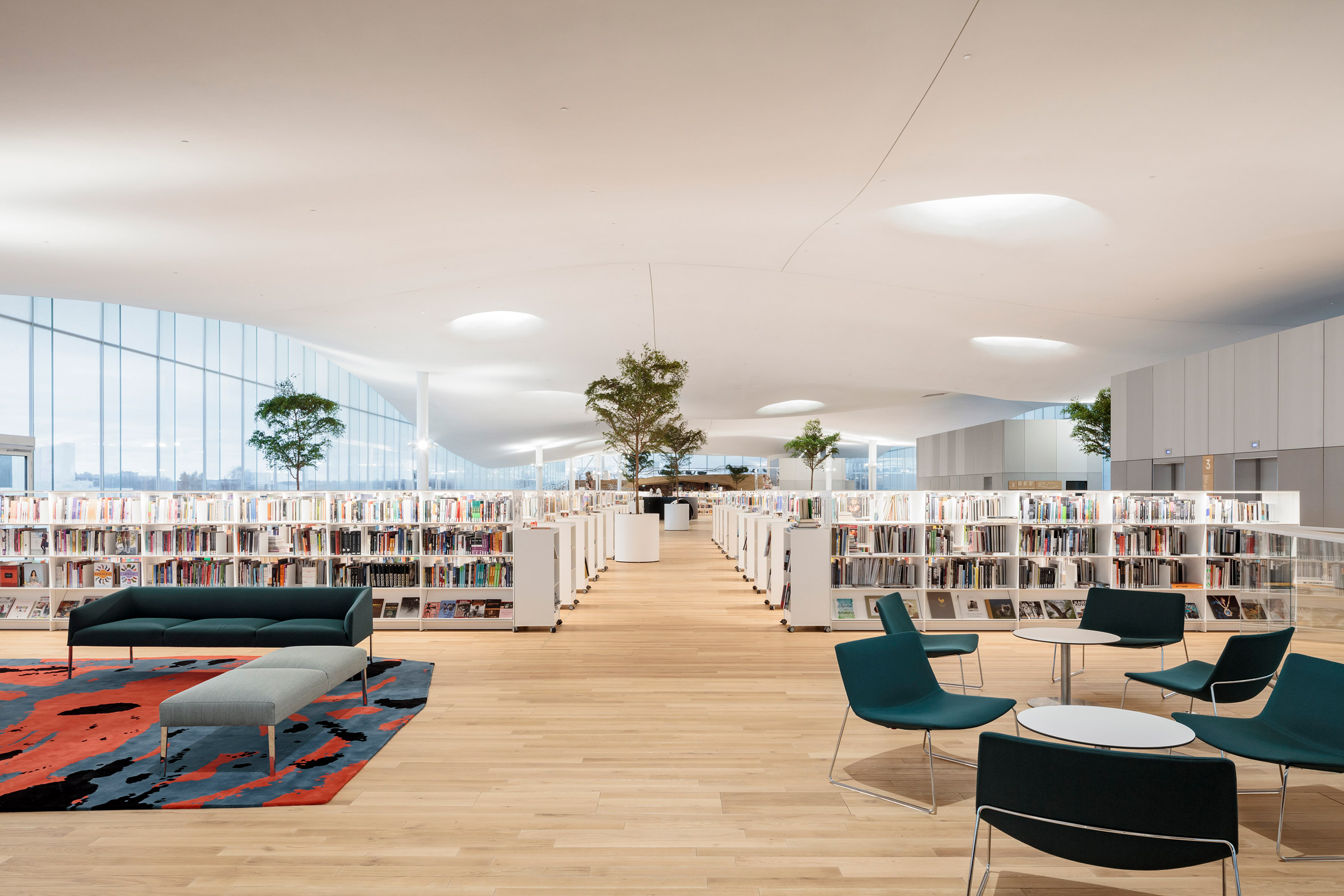 The design also needed to respond to the diverse aesthetic styles of the various other civic institutions positioned around the Kansalaistori square, which include the Kiasma Museum of Contemporary Art, the offices of the Helsingin Sanomat Newspaper and the Musiikktalo Concert Hall.

The architectural solution utilises a pair of steel arches that span over 100 metres to form a bridge-like structure supporting the tensioned reinforced-concrete floor slab. 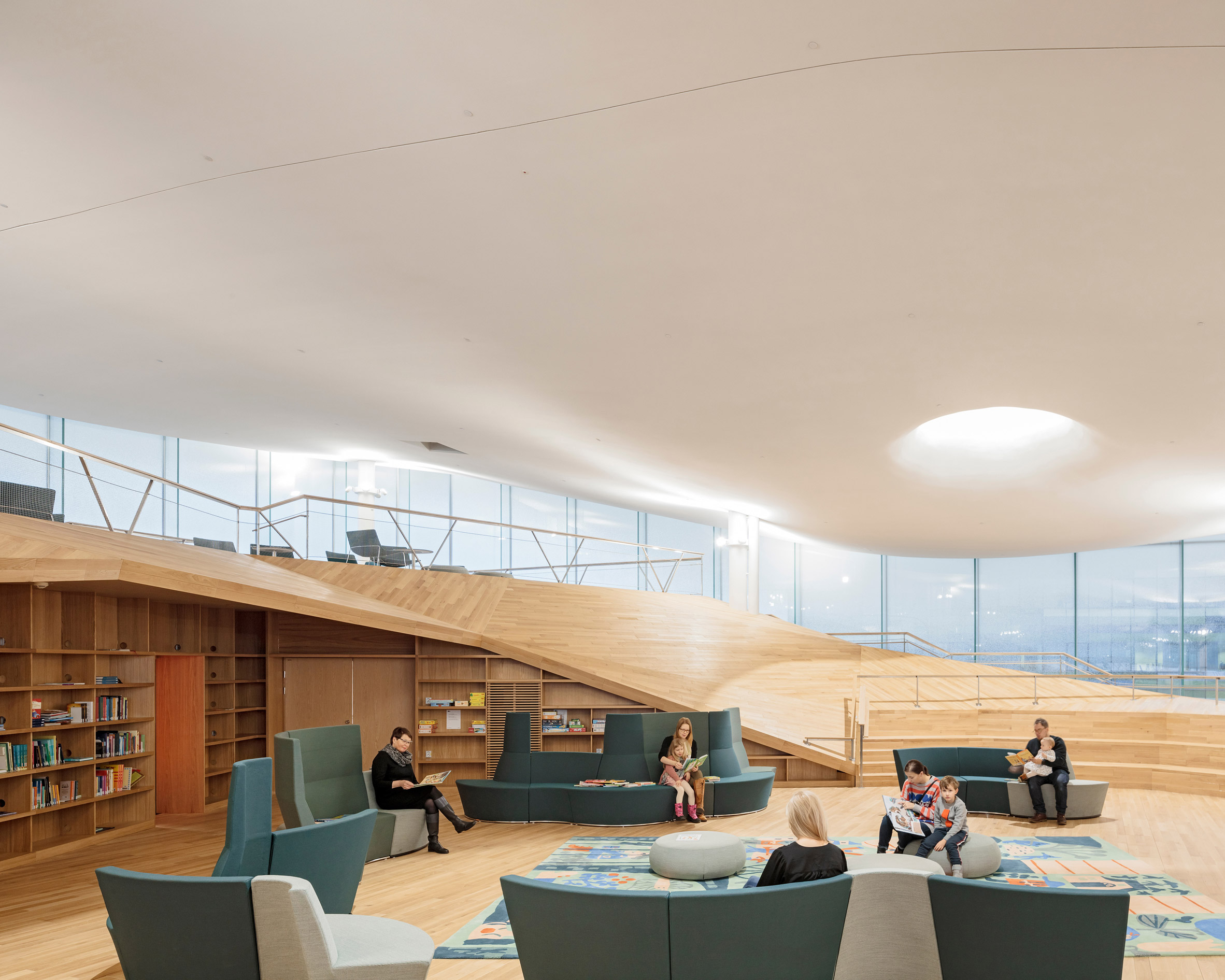 Secondary steel trusses allow a cantilevering balcony and roof to be suspended asymmetrically from the arches. The design creates open, column-free interior spaces and the possibility for the road tunnel to extend beneath the building without compromising its structure.

The library’s ground floor is intended as an extension of the plaza, with the wooden roof overhanging a covered space that can be used for outdoor events. A glass wall containing the entrance creates a minimal threshold between interior and exterior. 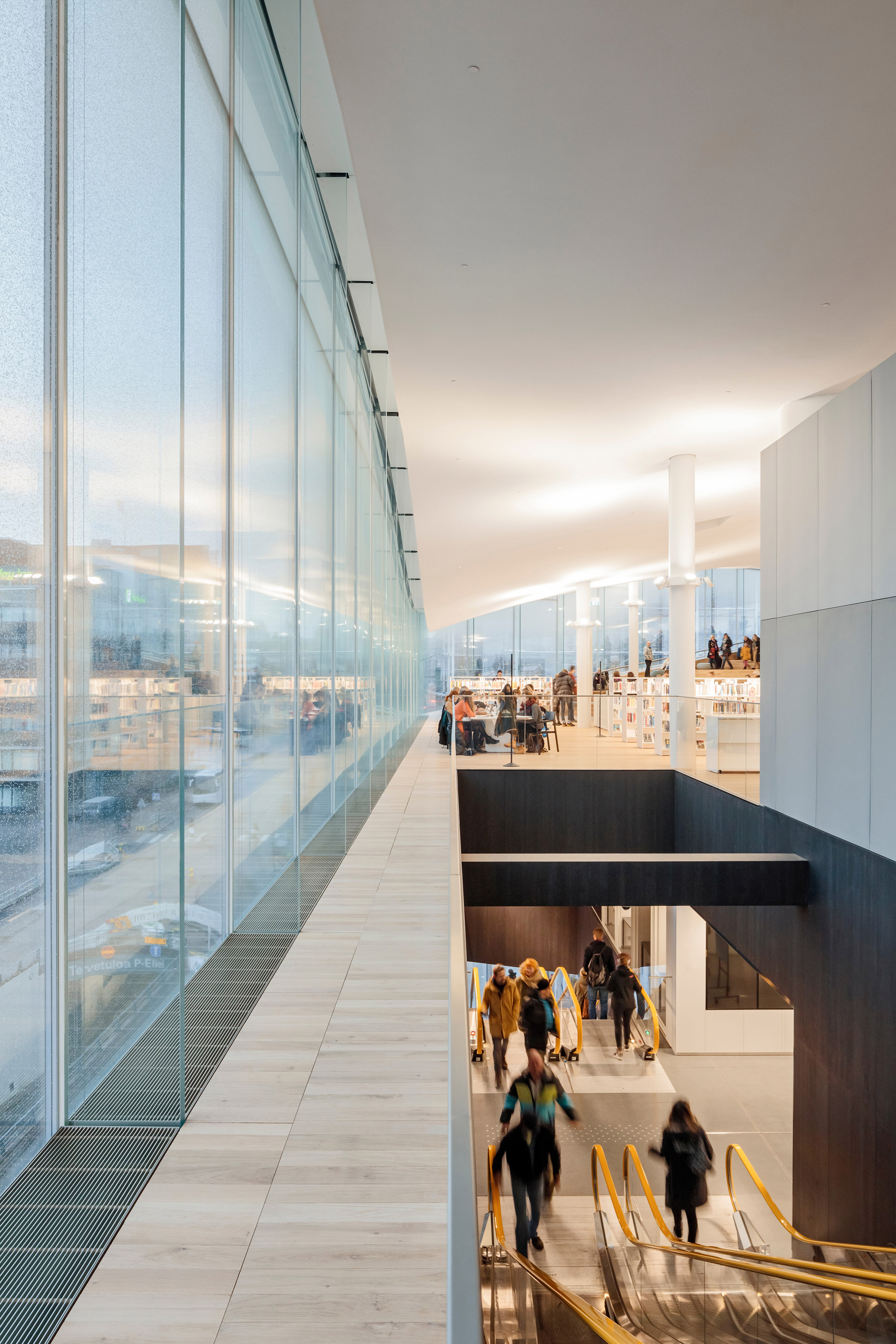 The library’s main amenities are clearly visible and accessible from within the open ground floor, which accommodates the National Audiovisual Institute’s cinema, along with a restaurant that can extends out onto the plaza in the summer.

The middle floor contains multipurpose rooms used as offices, studios, meeting areas and maker spaces. These rooms are slotted into nooks and corners around the trusses of the bridge structure. 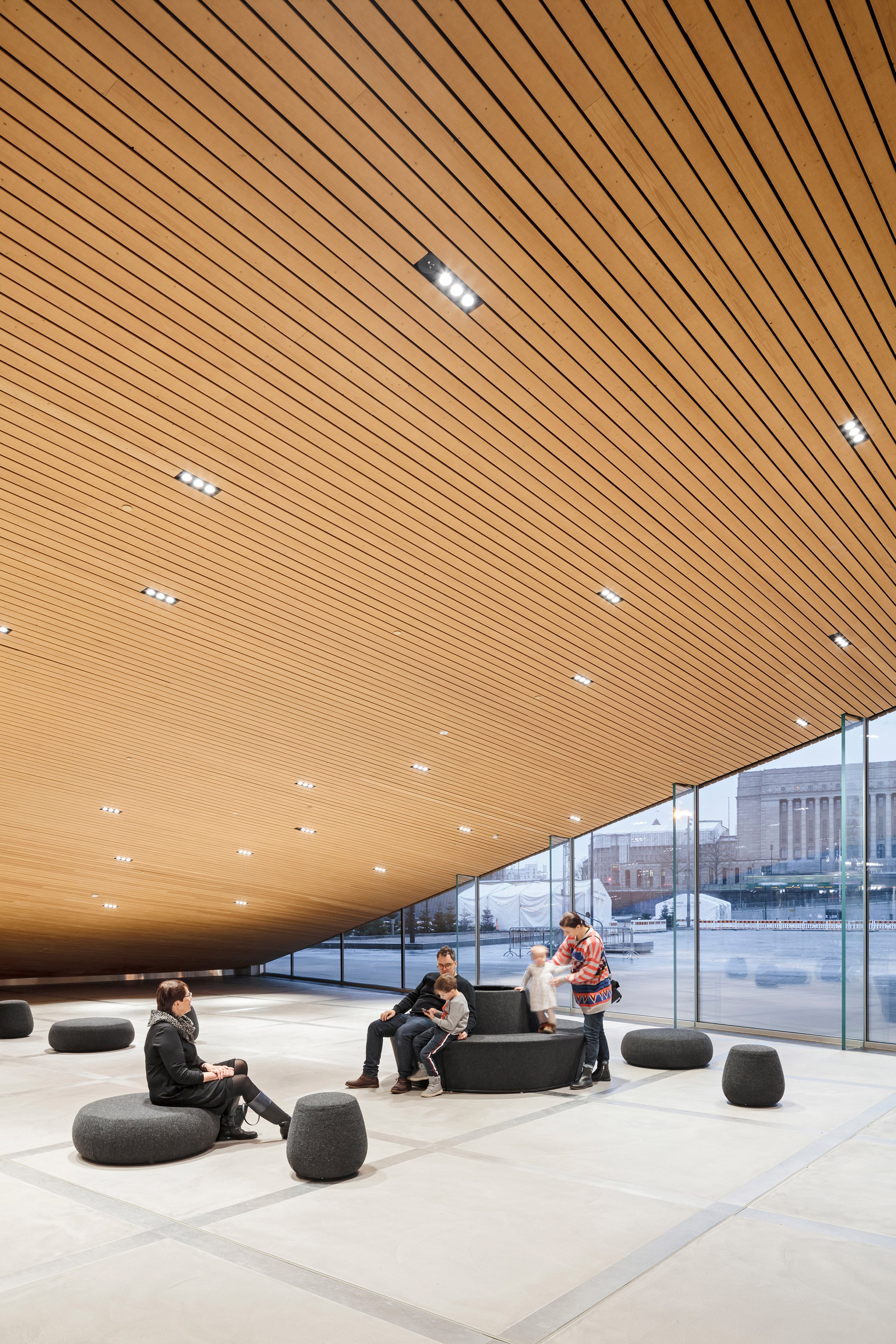 The building’s upper floor is known as “book heaven” and contains the library stacks in another predominantly open space topped with a distinctive undulating white ceiling.

“Here, the best characteristics of the modernist library meet the possibilities provided by 21st-century technologies,” said the architects of the upper storey. “The serene atmosphere invites visitors to read, learn, think and to enjoy themselves.” 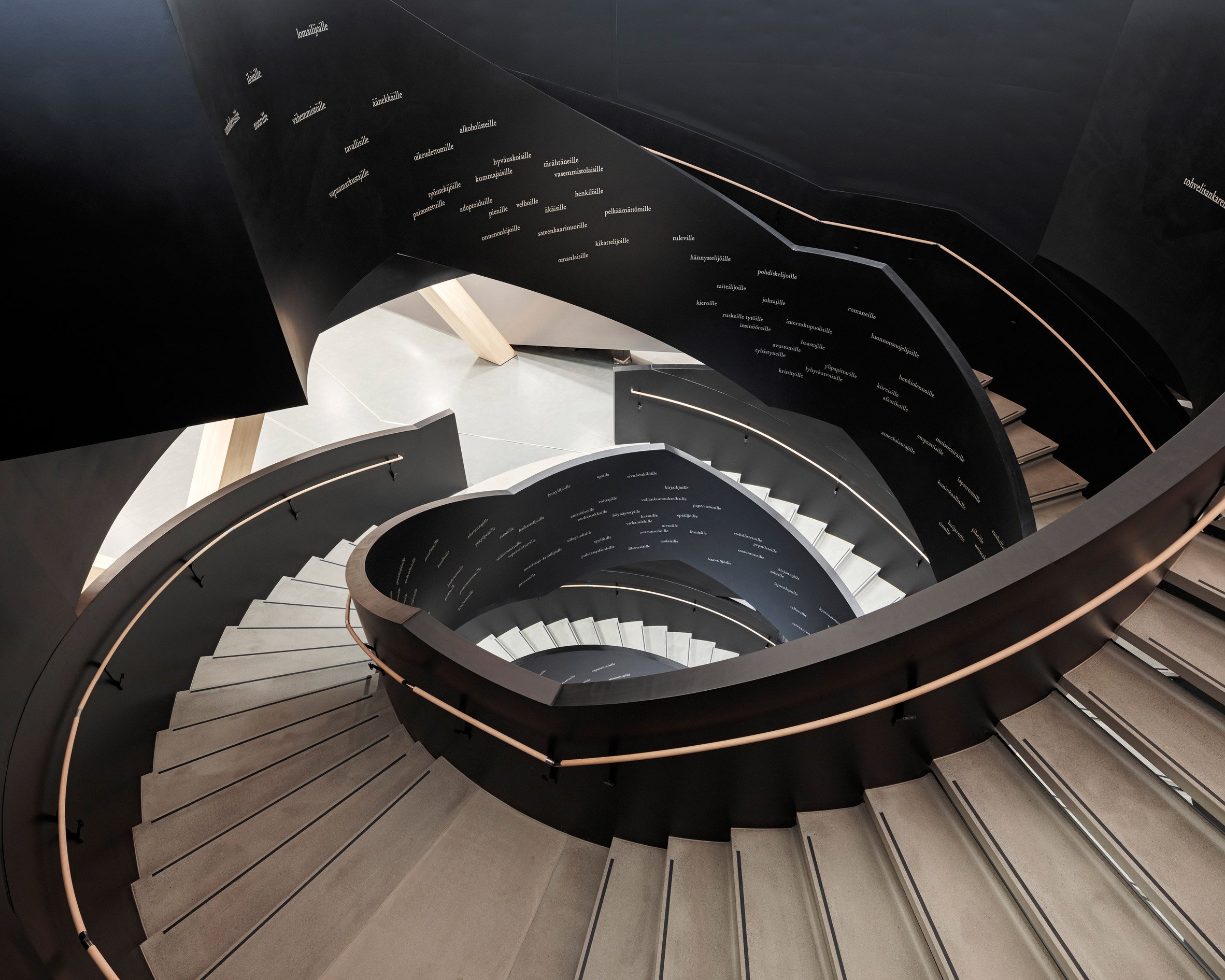 Circular apertures in the ceiling allow natural light to flood down into the centre of the room, which features a wooden floor that slopes up to form a casual seating area in one corner.

Full-height glazing that wraps around the room provides expansive views across the city, with a balcony on the west side occupying the bulging section of the cantilevered roof. 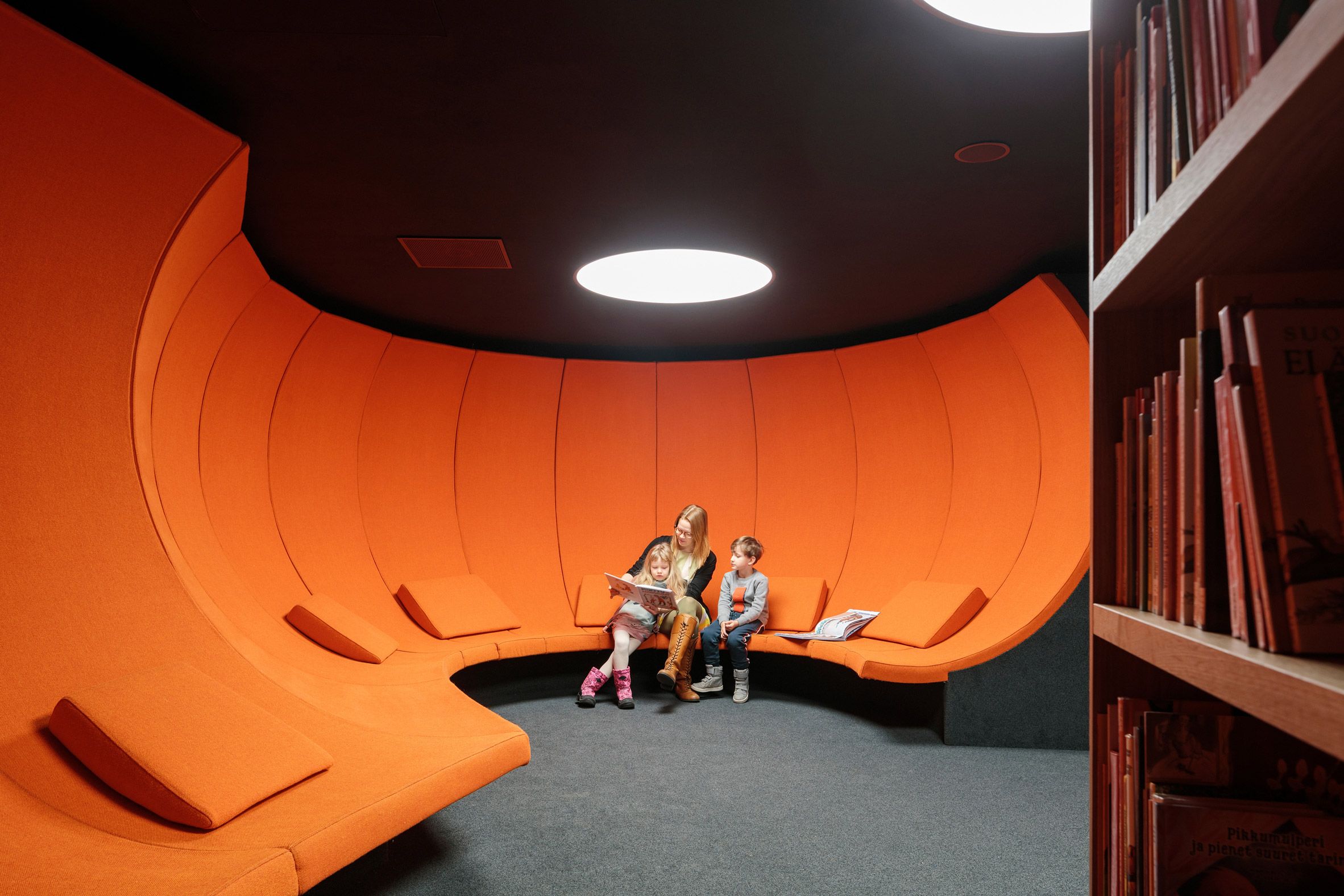 Spaces for maintenance and logistics are located in the basement, while administration and storage spaces are kept to a minimum to maximise the publicly accessible floor area.

ALA Architects is known for designing public and cultural buildings, with previous projects including an extension to a theatre in the city of Kuopio clad in crinkled fibre-cement panels, and a concert hall in Kristiansand, Norway, featuring an undulating oak ceiling.

Photography is by Tuomas Uusheimo.