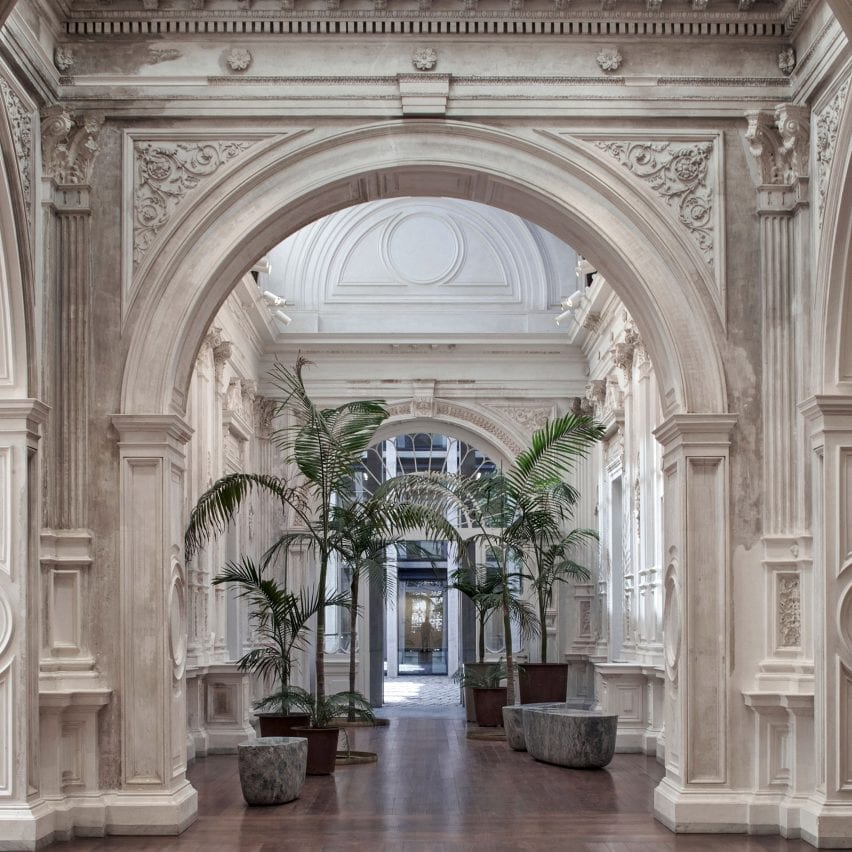 The building, which was designed in the mid 1800s by French architect Lucien Hénault is now the headquarters for the country’s Ministry of Culture, Arts and Heritage.

Cecilia Puga and Paula Velasco, who collaborate in a partnership, worked with Moletto Arquitectos founder Alberto Moletto on the project.

The trio of Santiago-based architects, led by Puga, won the competition to renovate the building in 2012.

Instead of restoring the building to an exact copy of its original state, the architects added contemporary additions to places where the historic building had crumbled away .

“The project’s material strategy sought to draw attention to the complexity of inhabiting such a structure,” said the architects.

“Prioritizing neither the new intervention nor the character of the elegant wreckage of the Palacio Pereira.”

A complex grid of concrete pillars restores the shape of the original courtyard where the building had been partially demolished.

The courtyard originally separated the family rooms from the services areas when the building was a grand house. Now levels of offices with floor-to-ceiling glazing look out through the concrete pillars onto the courtyard.

“Given the collapse of original mezzanines in many areas of the building, such as the ones destinated to be a public cafeteria and book store, we let the fabric of the building exposed and in full height without rebuilding ceilings or covering surfaces,” added the architects.

In these areas, the 15-metre-high ceilings have been accentuated by a pair of helical staircases clad in bronze.

Throughout its lifetime the building suffered damage in earthquakes and after the 1973 coup d’état.

Palacio Pereira was bought by the government in 2011 and it launched a competition to restore and convert the mansion into offices for the culture ministry.

The offices will be one of the venues for Chile’s Constitutional Convention, where a new constitution will be written for the country following protests and riots that began in October 2019.

Local photographer Cristobal Palma documented the city’s boarded-up streets during this period of unrest in a photo essay for Dezeen.

More historic buildings given a new lease of life in the city include a 1930s mansion that’s now a fintech startup’s offices and an abandoned public education building that’s been turned into a family health centre.

Photography is by Cristobal Palma.