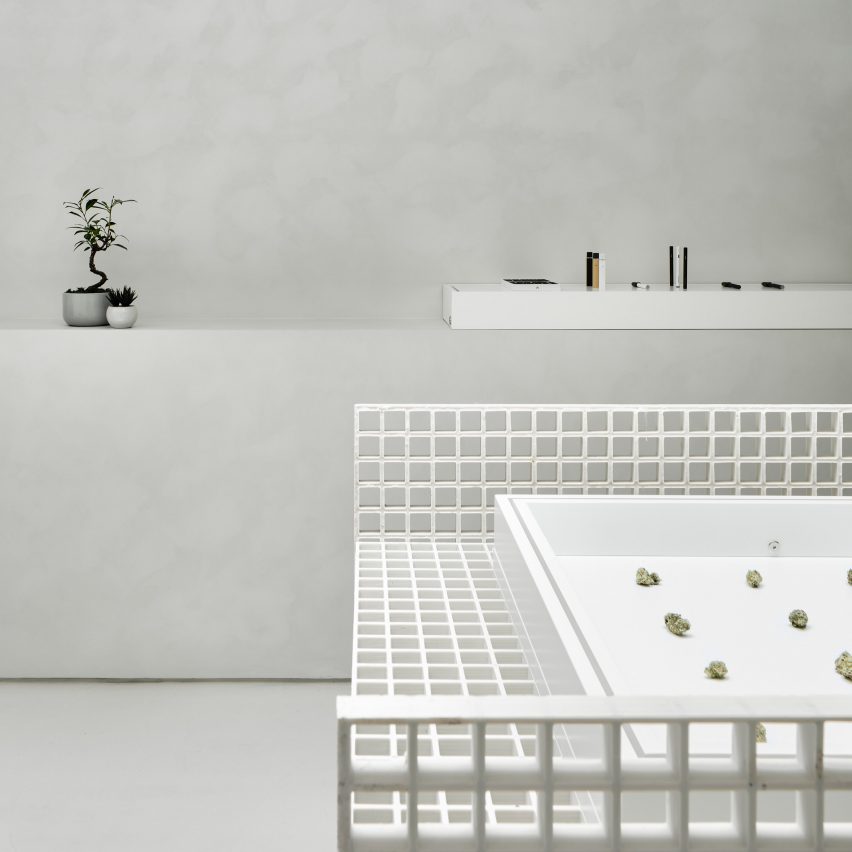 Edition sells a curated selection of cannabis strains and smoking accessories, including items such as bongs, grinders, ashtrays and rolling papers.

Studio AC was, from the outset of the project, keen to reimagine how these products are presented inside the company’s store.

The studio wanted to do away with typical shelves or display units and instead create something that could be described as a “retail sculpture”.

“We wanted to produce a singular design element, a sculpture of sorts that has its own aesthetic quality and massing that simultaneously is inspired by existing conditions while also setting out to define new ones,” said the studio.

White sheets of industrial grating have been used to make a sequence of chunky counters, which are arranged to run in a single line down the middle of the store.

Edition’s merchandise is displayed on top of the counters in shallow white trays.

“[The grating] has a unique self-supporting structural ability and an enticing visual quality that screens and filters light, producing moments of opacity/transparency depending on one’s vantage point,” the studio explained.

“These qualities, along with the material’s relative affordability, allow for larger design gestures to be executed within a modest budget.”

The same grating material has been used to create a suspended ceiling directly above the central counter. By lowering a section of the ceiling, the studio hoped to “compress” the store and foster a feeling of intimacy amongst visitors.

A grated screen has also been erected in the entryway.

A handful of products are showcased on stepped platforms that butt up against the peripheral walls of Edition.

To keep the space otherwise simple, the studio has washed surfaces in lime paint – the only splash of colour comes from a couple of potted plants that have been sparingly dotted throughout the store as decor.

Studio AC was established in 2015 and is led by Andrew Hill and Jennifer Kudlats. The firm’s Edition project joins a growing number of design-focused cannabis dispensaries that have opened in recent years.

Others include Serra in Portland, where products are presented inside greenhouse-like display cases. There’s also Dosist in Los Angeles, which is decked out in a soothing mix of white-washed maple wood and limestone to reflect the connection between cannabis and wellness.