The owner of this terrarium store in south London used an image she chanced across on Instagram to inform the interior’s bright colour palette.

It is the first retail space for London Terrariums, which creates plant-filled vessels for commercial and private clients. The company’s co-founder, Emma Sibley, came up with a concept based on an Instagram photo, and invited her former studio mates Isabel + Helen to help her bring the interior design to life. 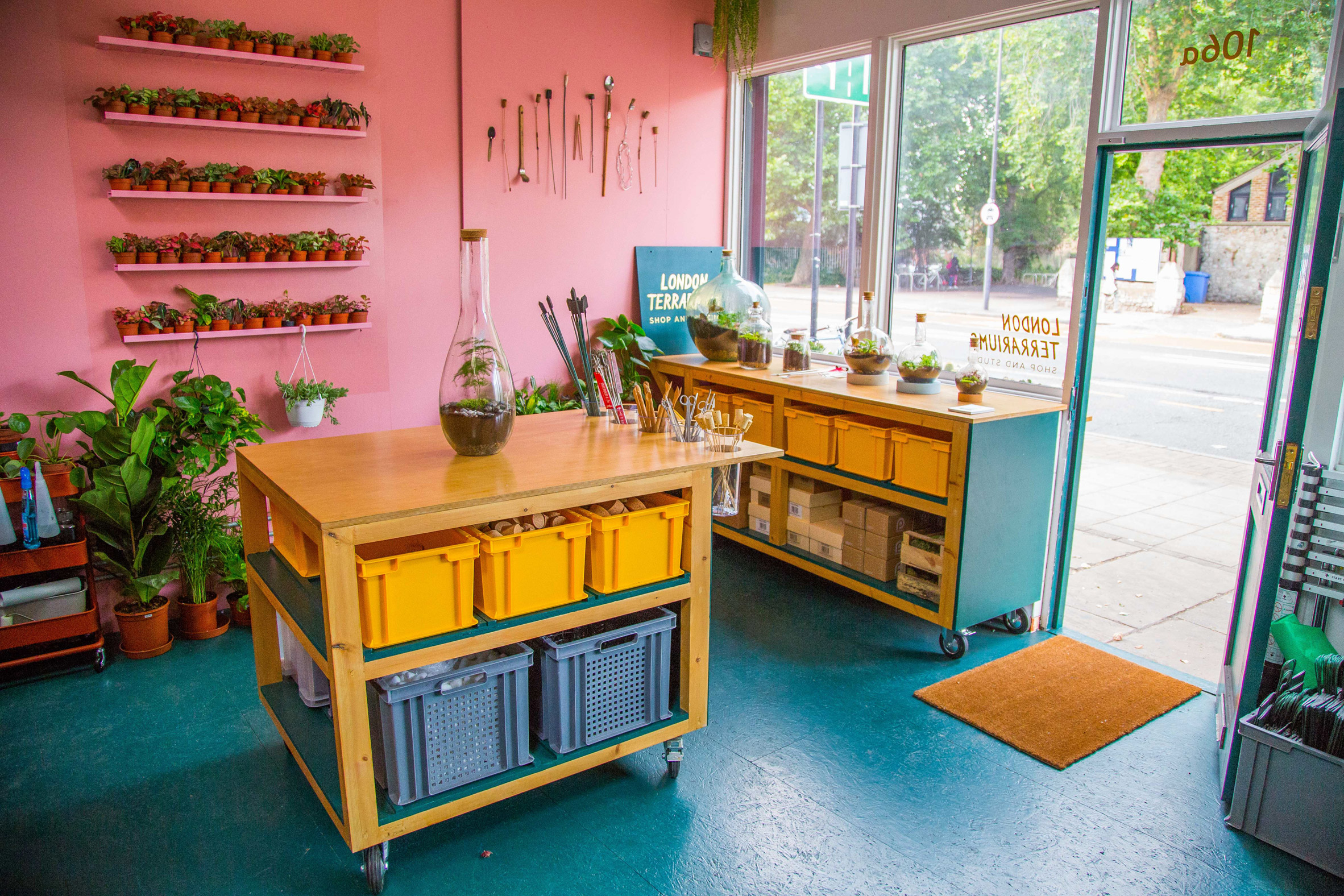 Prior to that, the company had worked exclusively from a studio in Bermondsey since launching in 2014, with Sibley travelling around the city to host terrarium-building workshops.

“[The Bermondsey studio] was perfect as we could make all the terrariums, making as much mess as needed in our enclosed space,” Sibley told Dezeen. “However it did mean that we did not have anywhere to hold workshops ourselves, and we had people turning up at the studio expecting to see a shop.”

The company is now located on a main road in New Cross, acting as a “little haven from noise and chaos”. 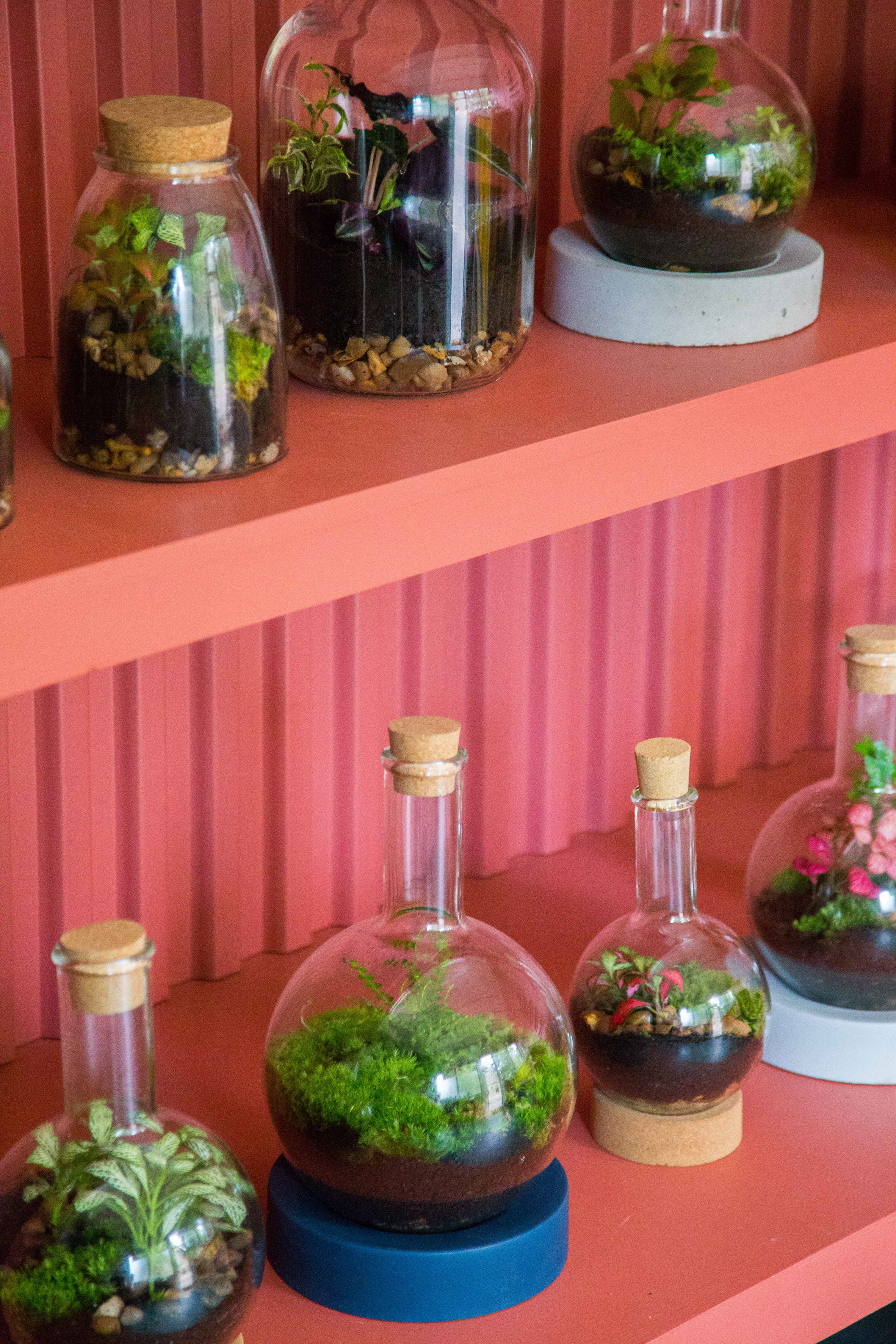 For the design of the store, Sibley turned to the creative partnership Isabel + Helen, with whom she had shared her previous studio.

“I was certain that I wanted to step away from the minimal, Skandi white aesthetic,” Sibley explained. “I found a photograph of a woman on Instagram when I was scrolling through one day.”

“She had a forest green jacket, yellow sweater, and you could just see some gold glinting from her earring. The background was a rich rusted coral colour. I used it as my inspiration throughout the build.” 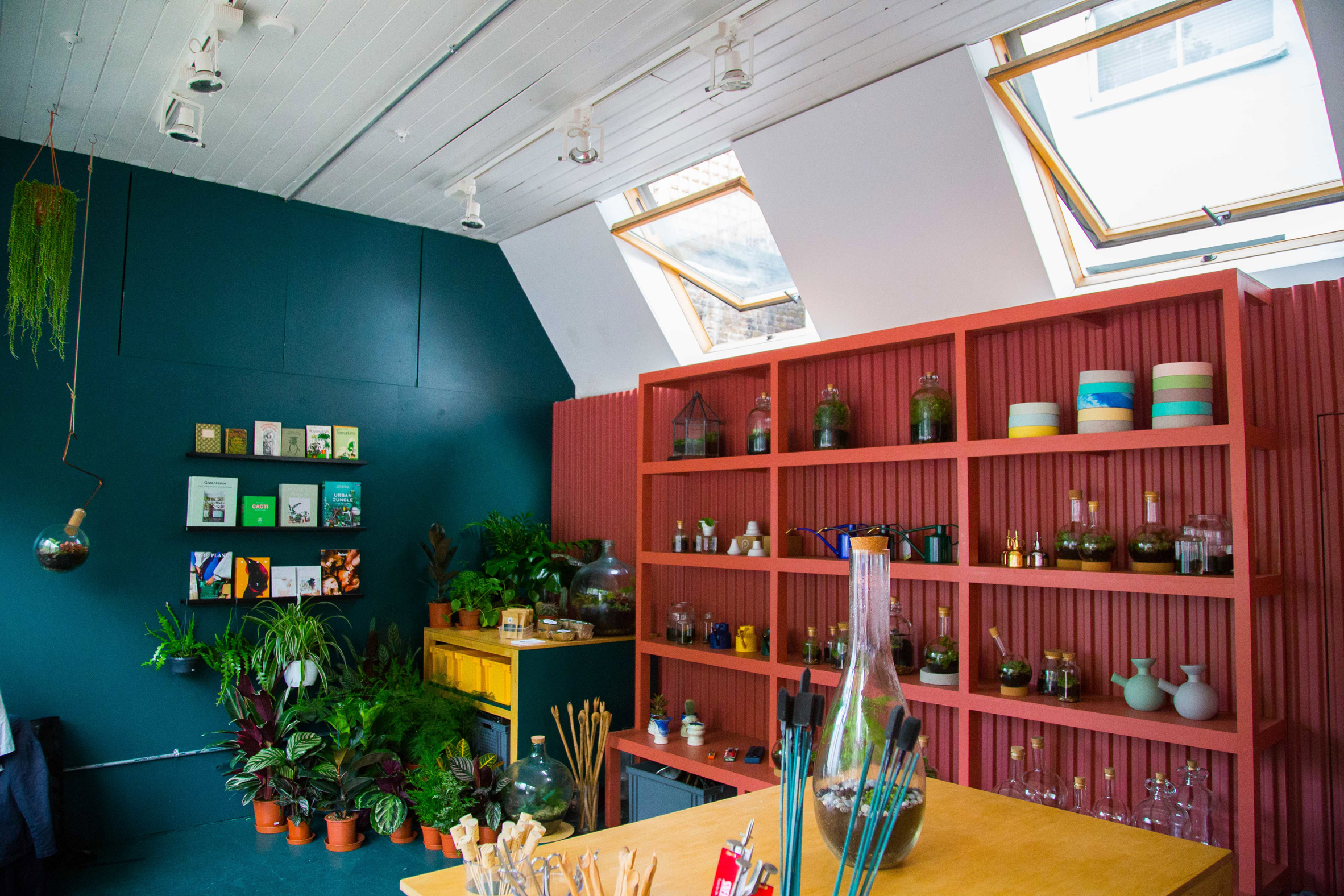 Isabel + Helen applied these same tones to the store, using coral pink for the walls, a deep sea-green for the flooring and touches of yellow with storage containers.

The back wall has been clad in spray-painted corrugated plastic in order to “create something more than just a flat space”.

Shelving has also been specially crafted from perforated metal cable trays to allow liquid to fall from level to level when plants are being watered, and eventually settle in a moss tray at the bottom that needs to be kept constantly damp. 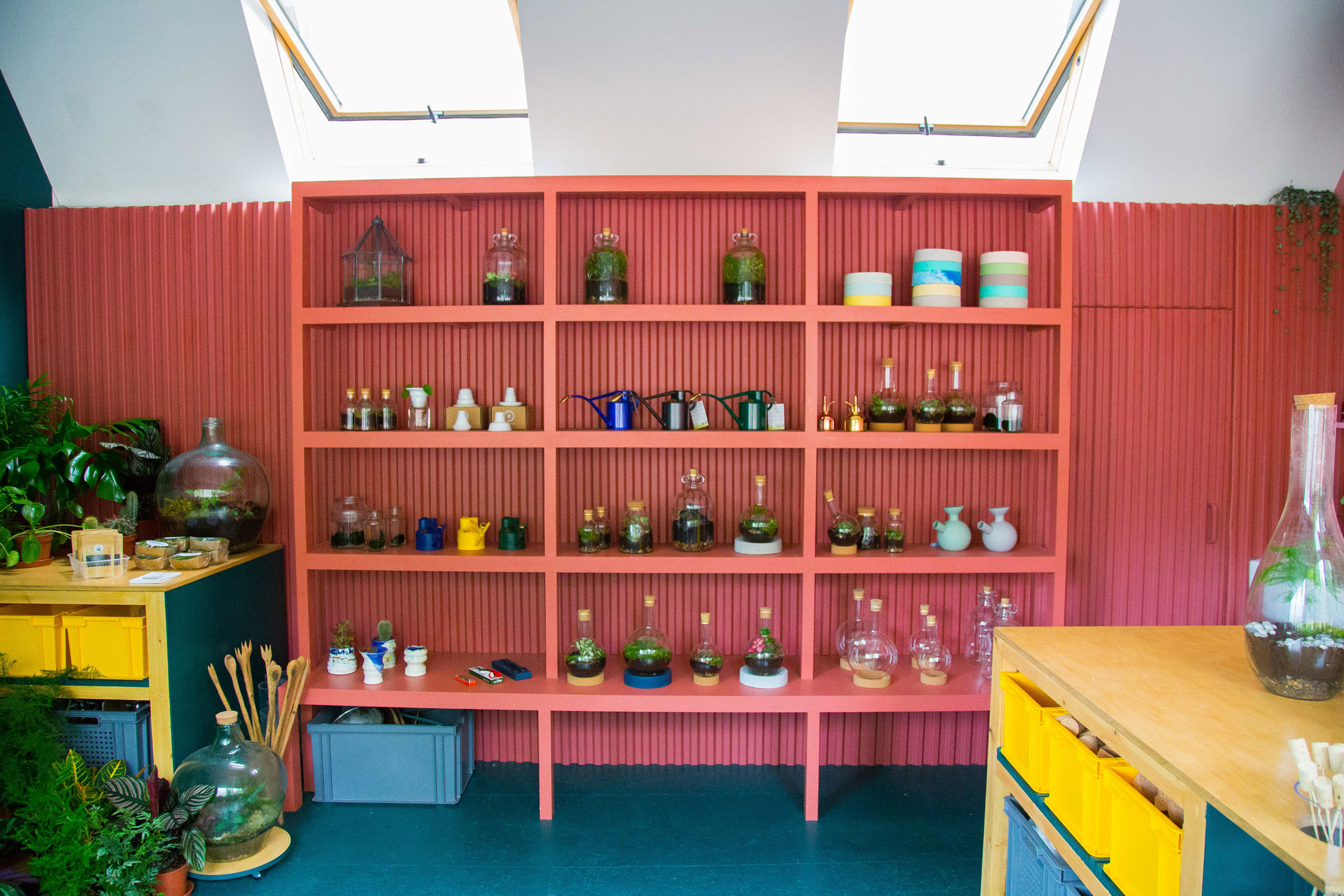 Sibley’s design brief also asked that the London Terrariums store should be versatile and able to operate as more than a retail space.

“I knew the space had to be functional and transformative, working as a studio, place for workshops, and beautiful shop as well,” she said.

To achieve this, Isabel + Helen placed each storage unit of the store on wheels so that they can be moved around when necessary. Workbenches can be divided into two separate blocks to create extra surface area for displaying stock, or fastened together to form a ten-person workshop table. 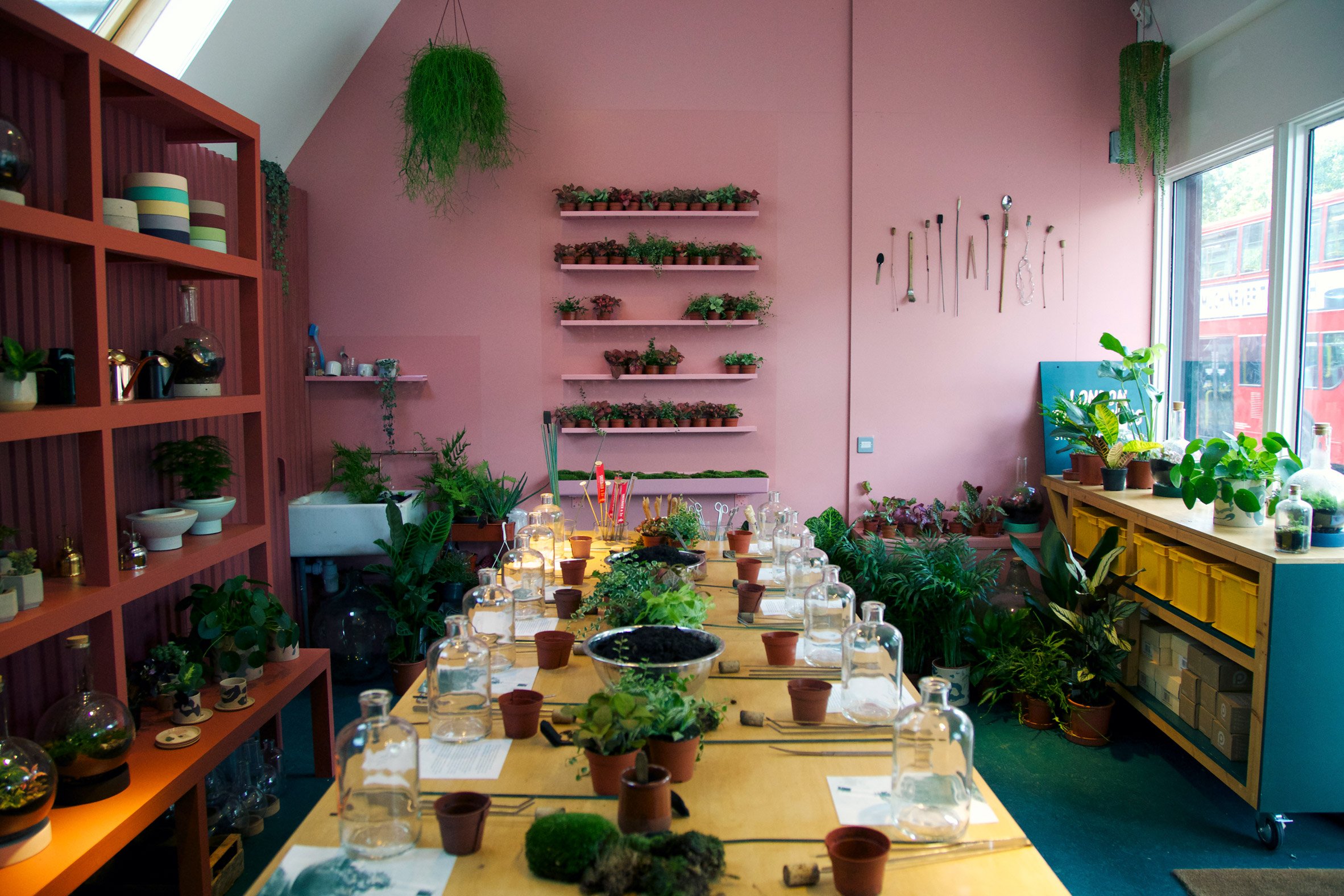 Pull-out wooden shelving has also been integrated into the store’s facade so that plants can be arranged outside.

Other businesses have also chosen to use colourful shades to deck out their retail spaces. Fashion label Acne opened a flagship store in Italy with a pink ceiling, while a cheese tart shop in Tokyo employed citrus hues of orange, yellow and lime to emulate a sunset on its counter. 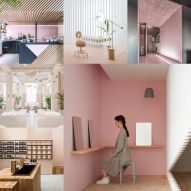