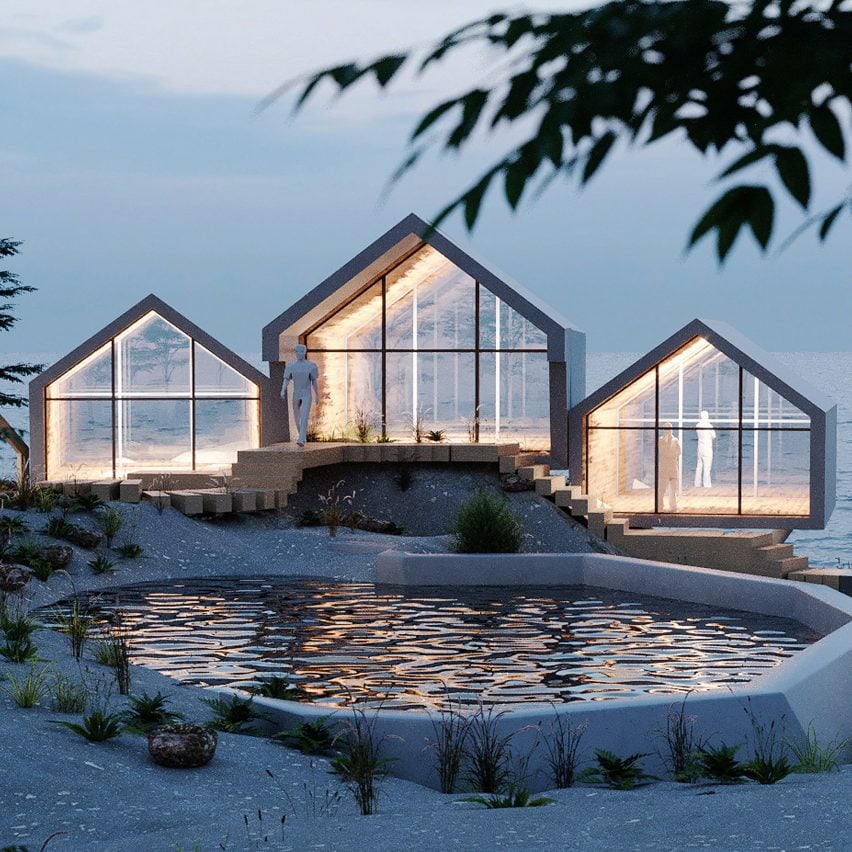 US studio Jendretzki Design has revealed designs for a boutique eco-resort on a tiny island within greater New York City.

The local studio has envisioned Rat Island for an isle off the city’s Bronx borough. It is one of the 44 isles that make up the New York archipelago, but the only one that is privately owned.

Jendretzki Design chose the scheme’s unusual name as a riff on a few local tales.

“The island was originally named Rattle Island, referring to rattles that the locals used to warn sailors about rocks,” Jendretzki Design told Dezeen.

“The island’s current name is not only a shortening of Rattle, but also refers to the escaped prisoners – rats – who would hide on the island.”

Renderings released by the studio showcase the early stages of a conceptual scheme for the island, which is currently only used for day trips by the owner.

“We are currently doing zoning analysis to determine variances needed so we can expand the current buildable setbacks,” said the studio.

“We are planning to develop an eco-boutique resort or retreat with individual pods or cabins, in addition to the main house,” it added.

The island is located halfway between Pelham Islands’ City Island and Hart Island, and south of High Island. It is part of the City Island Harbor and the greater Long Island Sound. The location is ideal for a nature retreat close to the urban core.

“It is a unique location and opportunity for hospitality or even as a residential project, given that it’s 30 minutes away from Central Park, but hosting features usually impossible to find so close to a large urban metropolis,” said the studio, “ideal to escape the stress of New York City.” 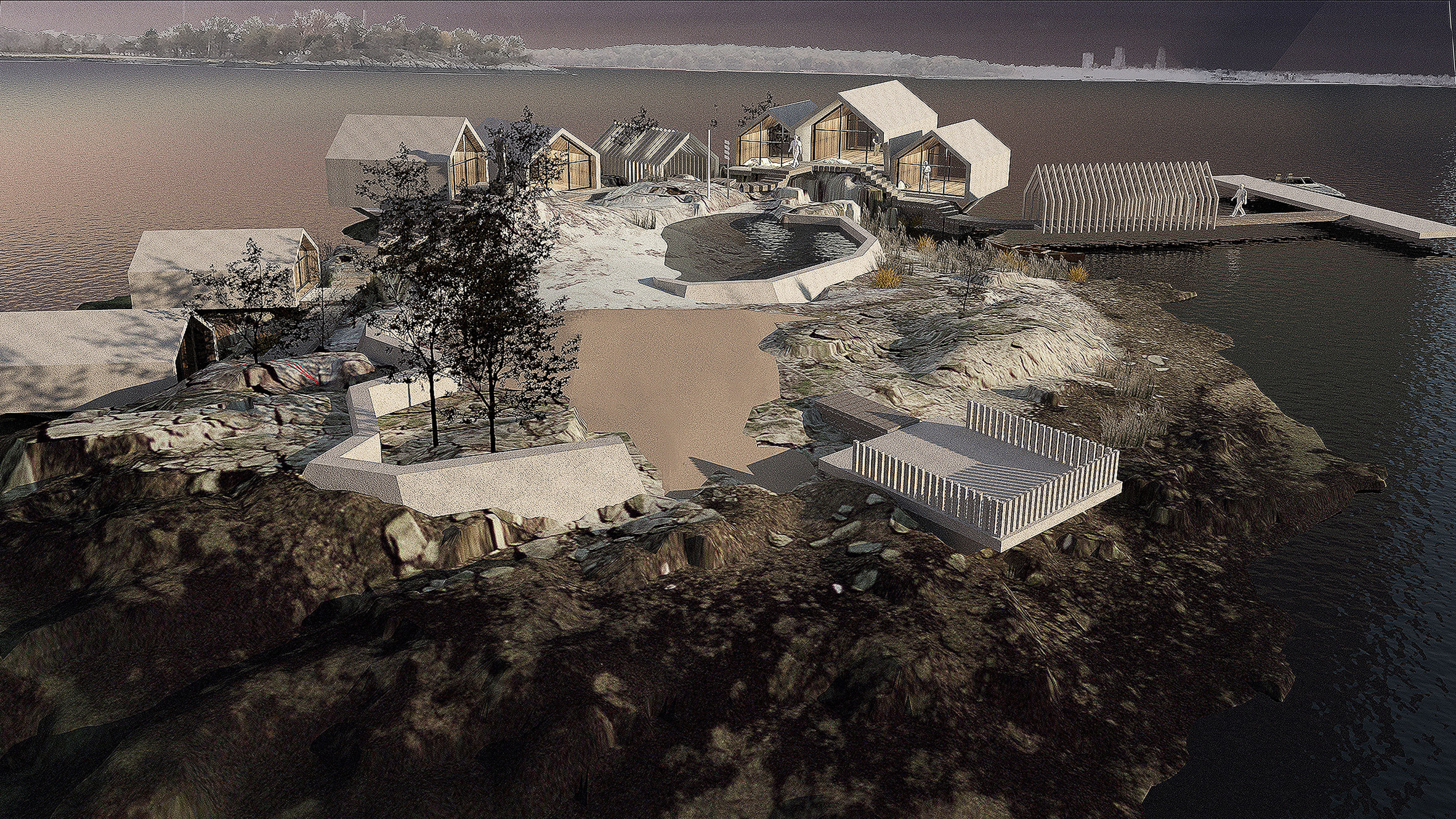 In this concept, the island is populated by gabled cabins made from wood and glass.

Cabins would run along the edge of the island to be as close to the water as possible. Large windows placed at each end of the cabins would offer water or inland views. 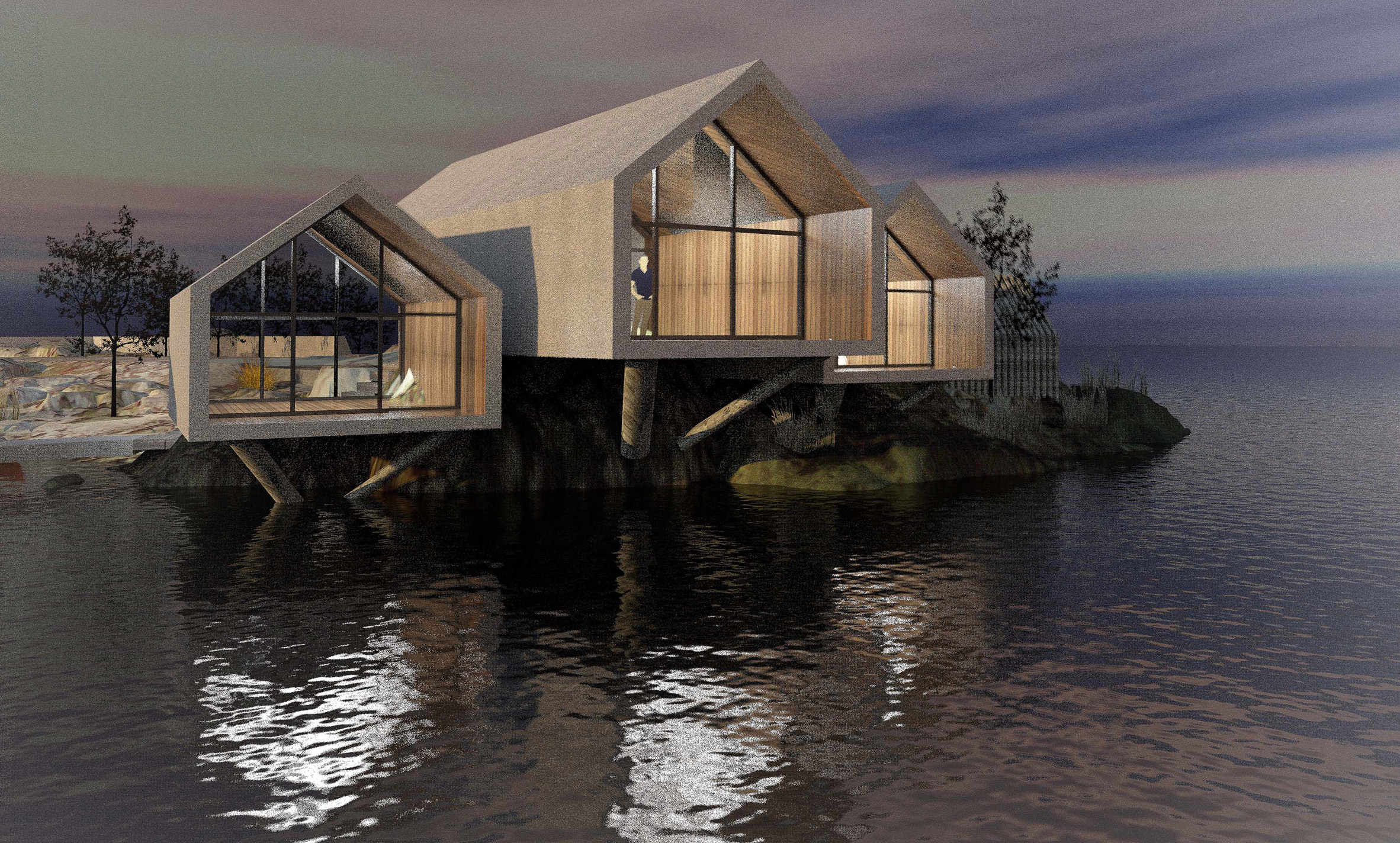 Jendretzki Design has proposed building the structures atop concrete braces and piers, which could be adjusted to suit the irregular rocky terrain.

Renderings show that each would comprise a single space featuring sleeping quarters, lounge areas, a bathroom and a kitchenette. 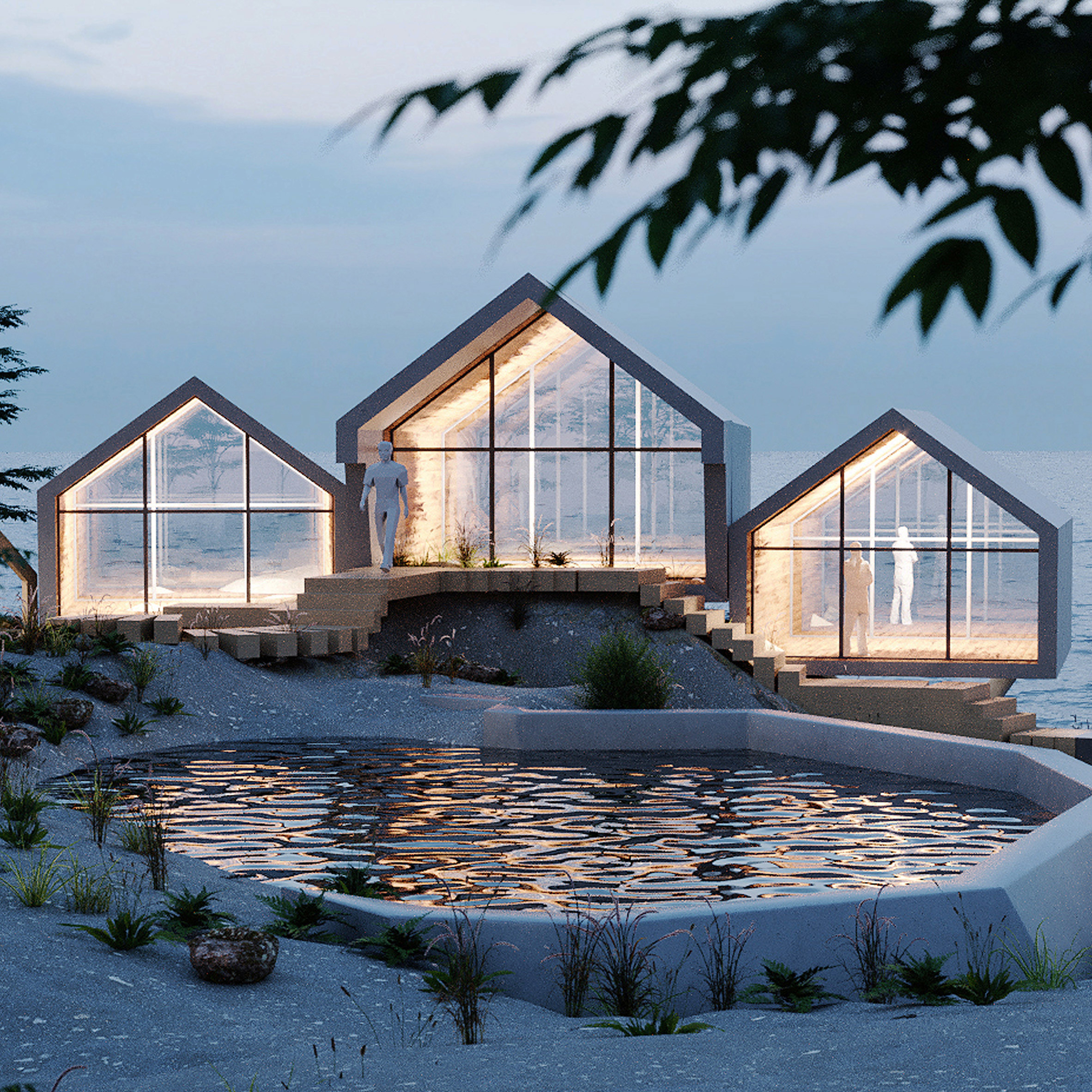 Access to Rat Island would be provided off the mainland via either air or water.

“There is a small canal penetrating through the island that was carved out of the rocks about 100 years ago that we incorporated into the design so that canoes and small boats can arrive directly under the main building on high tide,” said the studio.

It is approximately 2.5 acres (one hectare) in size, with sand and low plantings. There is no running water or other infrastructure installed at the moment. 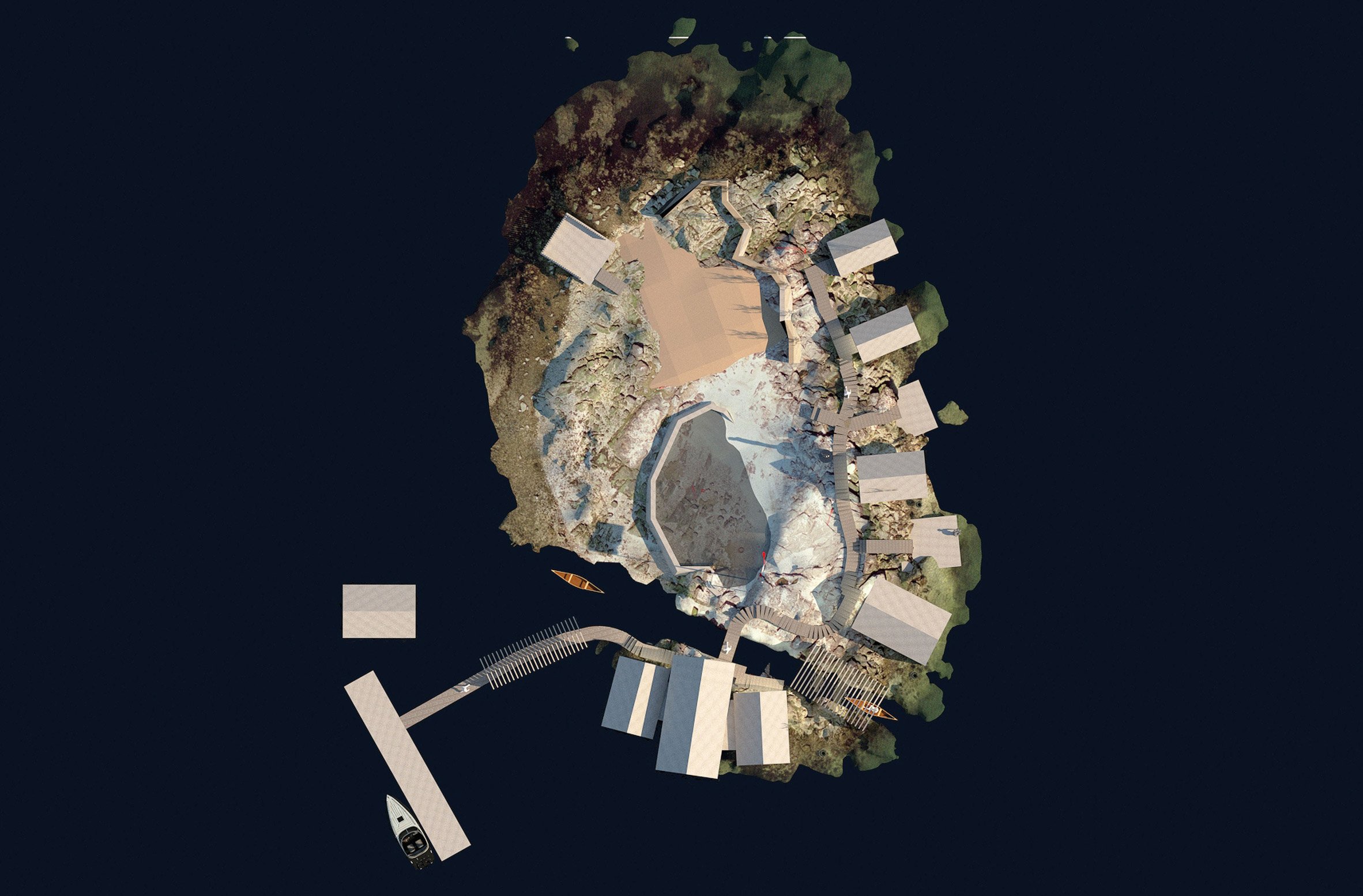 Jendretzki Design intends the island to be carbon-neutral and sustainable. The resort would feature solar- and wind- power, and rainwater could be collected and treated to provide potable and service waters.

The studio also proposes that the cabins would be prefabricated off-site and installed on the island. Compost treatment would also be included to get rid of waste. 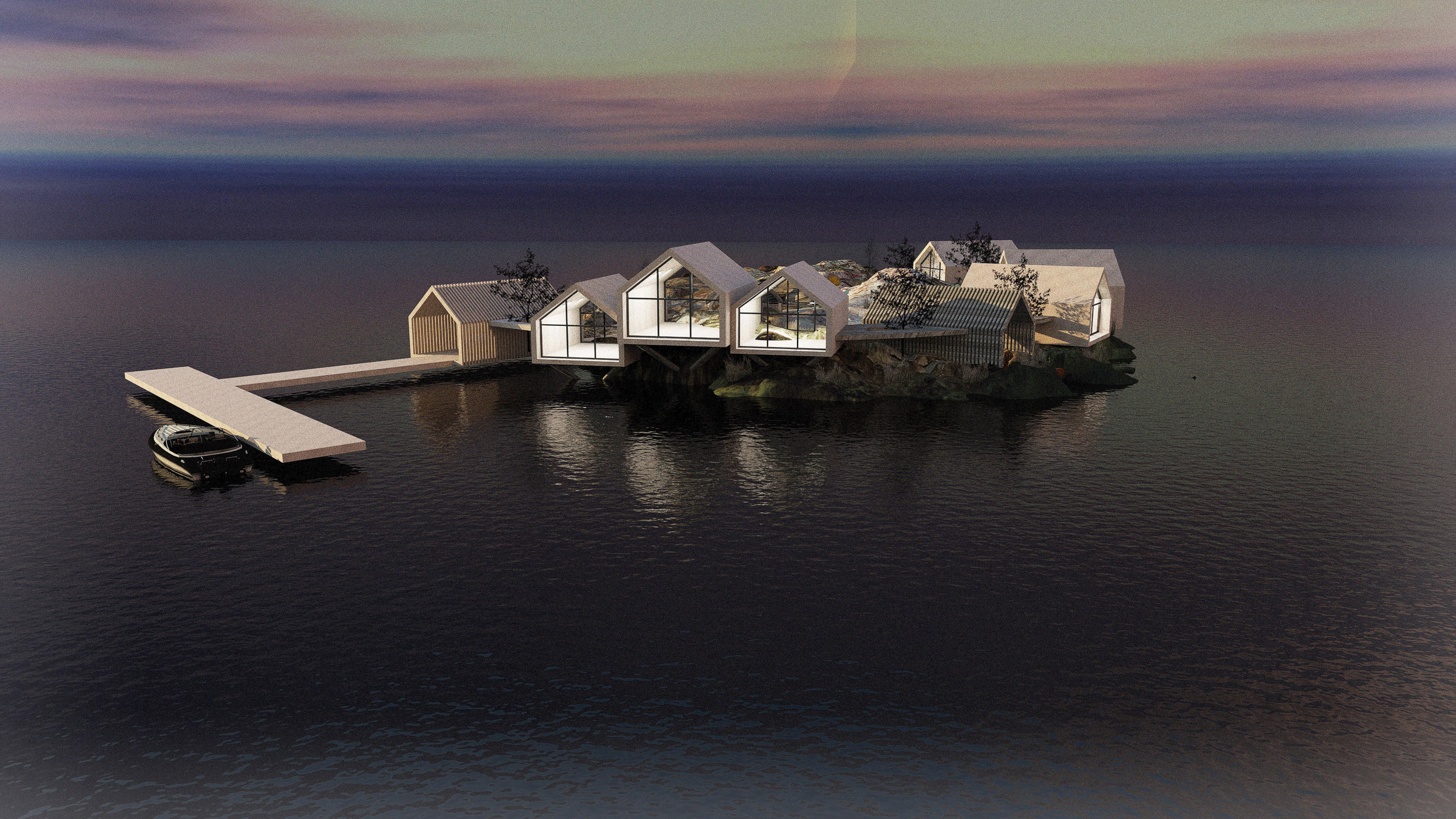 The Rat Island proposal looks similar to projects across Scandinavia, with contemporary buildings fused with rocky, coastal terrain. Similar examples are Villa Flåttarna by Wingårdhs near Smögen Island in Sweden and a set of black cabins by Margen Wigow Arkitektkontor in the archipelago of Stockholm.

Other free-standing residences that are on jagged waterfront properties are a wood house by Atelier Oslo in Norway and a gabled white cabin by Arrhov Frick Arkitektkontor in Sweden.

Images are by Jendretzki Design.