This monolithic concrete house in an affluent area of Porto presents a largely closed and robust facade to the street, but opens up on its side towards its garden.

Architect João Vieira de Campos designed the building as a single-family home that replaces a derelict villa in the Serralves neighbourhood to the west of Porto’s city centre.

The project involved designing the two storey residence as well as an accompanying outbuilding and landscaped spaces that echo its simple form and materiality. 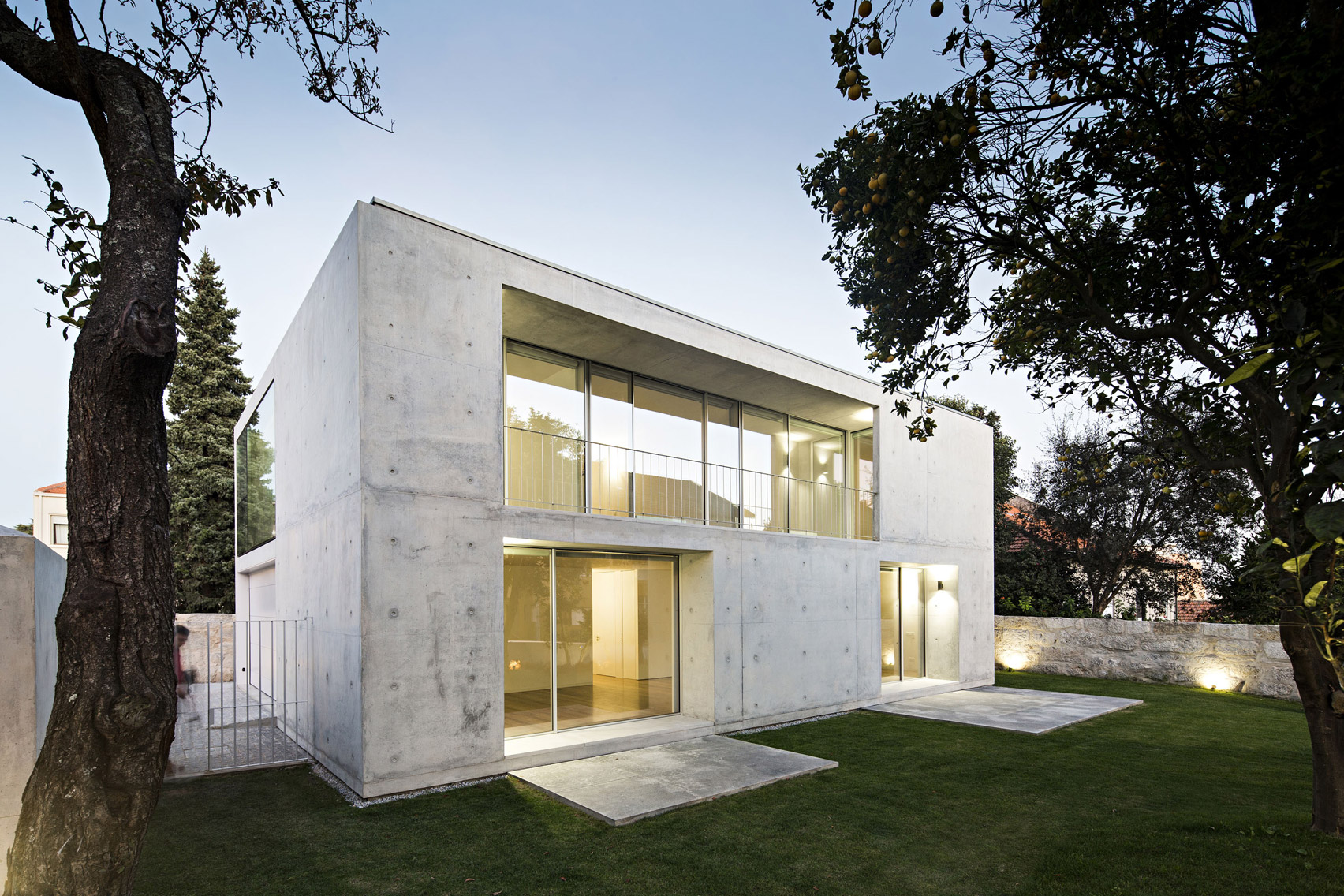 The building is constructed entirely from concrete to evoke the building that previously occupied the site. The raw concrete surfaces expose the details of the holes made by bolts used to hold the wooden formwork together.

A large sliding gate that partially conceals the building from the street opens onto a paved driveway and reveals the large garage, with its vertically retractable shutters. 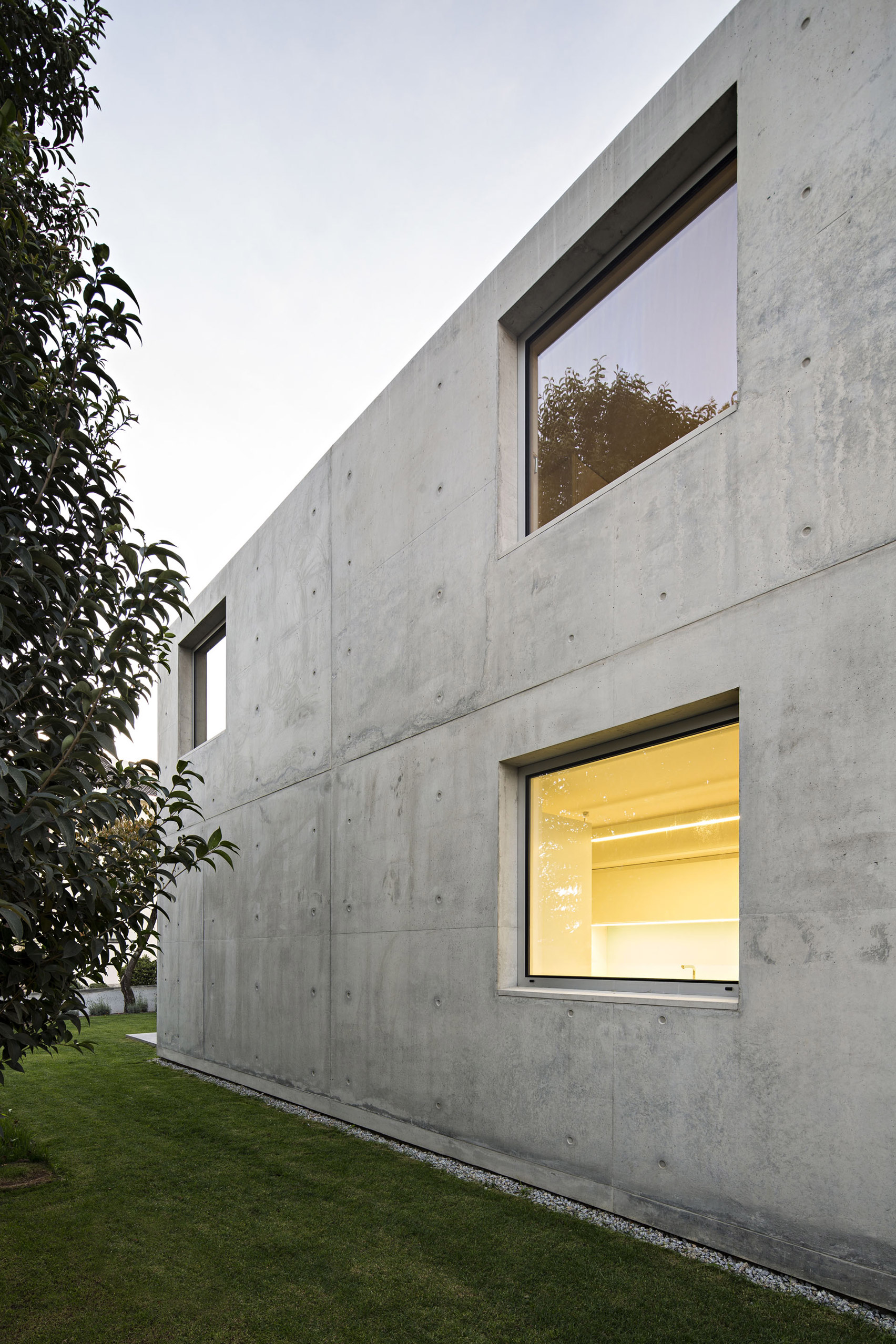 To one side of the driveway is a smaller concrete shed with a recessed entrance and an asymmetric hipped roof that utilises the same material and construction method as the main house.

The two-storey house is entered from a path that leads from the street along one side of the building. In addition to the two-car garage, this level accommodates a kitchen, living space and a small office. 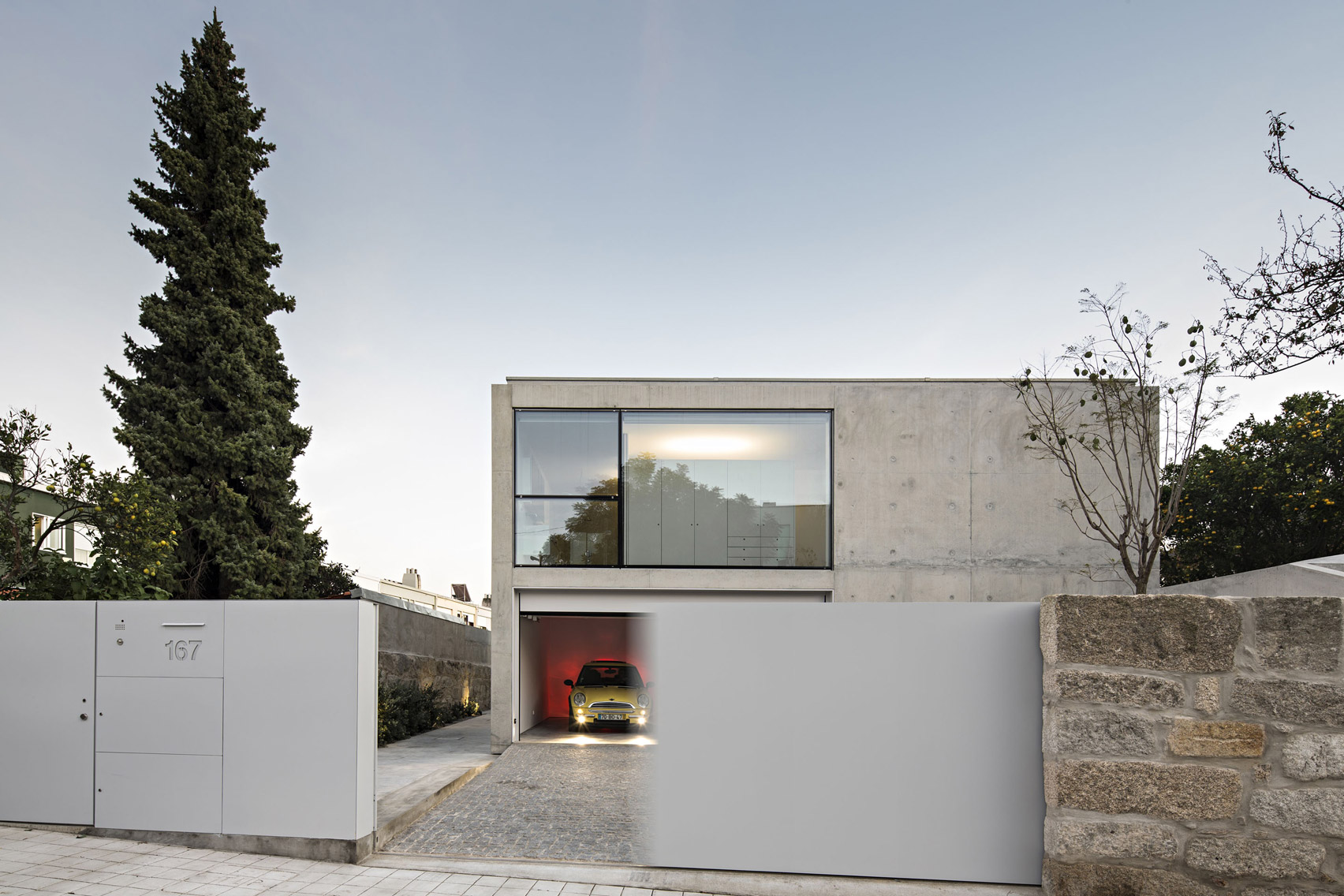 The entrance leads into a hallway area that encircles a structural core containing amenities including the staircase, storage, a washroom and a fireplace.

The main living area extends along the full width of the house at the opposite side to the entrance and looks out onto the garden. 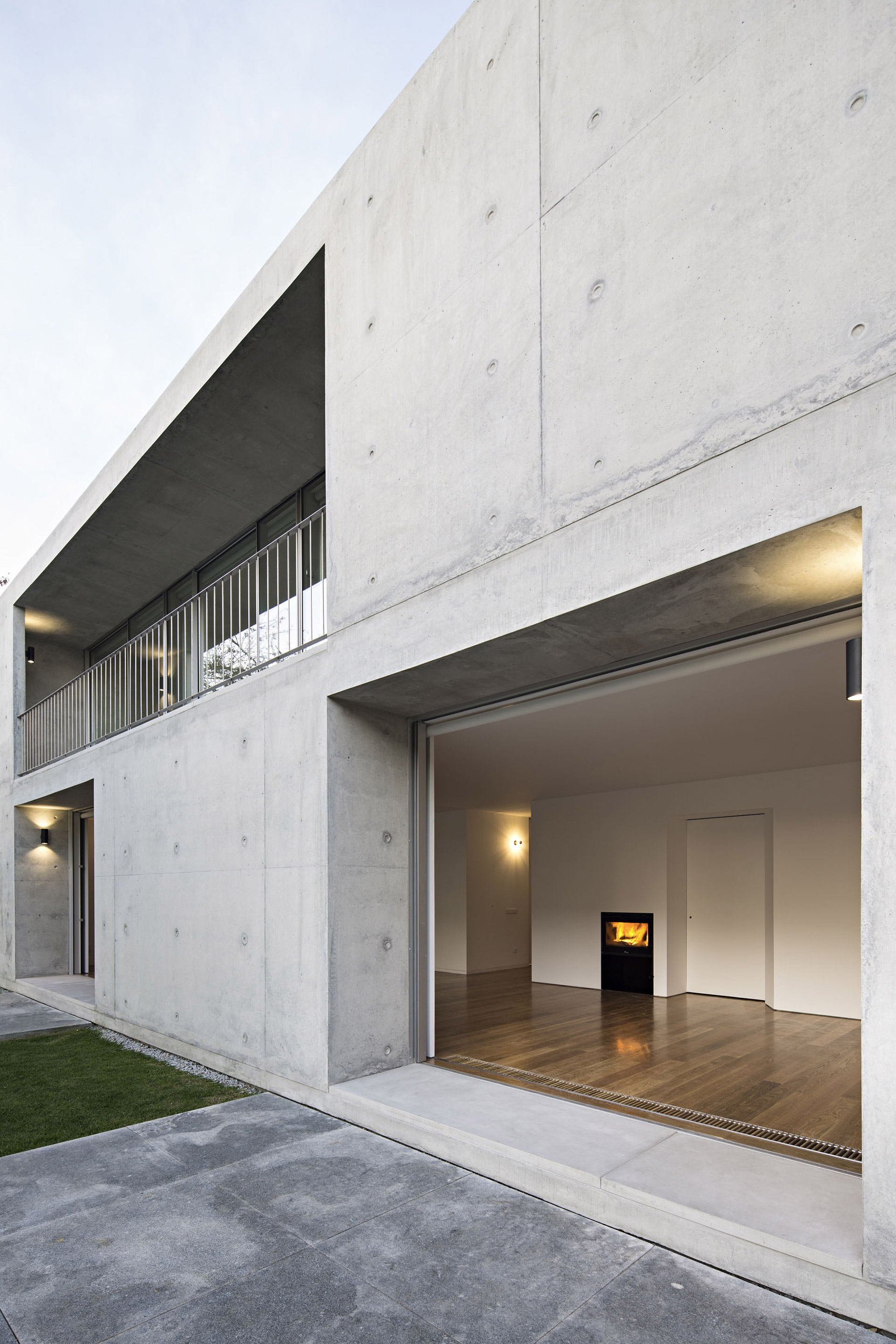 Full-height glazed surfaces allow natural light to flood into the living space. These sliding doors can be retracted to open up the interior to a pair of patios also made from concrete slabs.

The staircase leads up to a first floor containing four bedrooms, bathrooms and a laundry room. Each of the bedrooms opens onto a recessed balcony overlooking the garden. 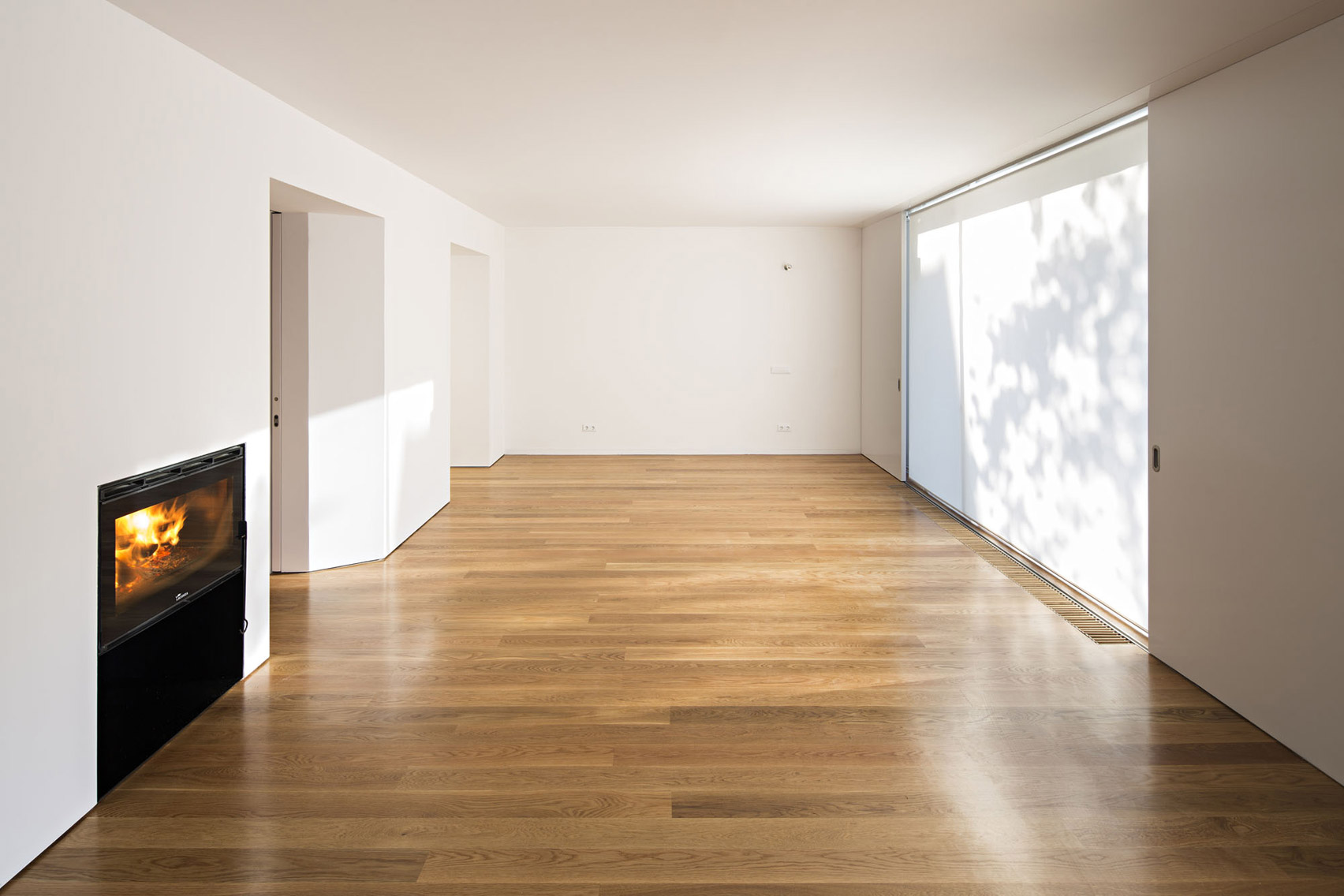 The sparsely decorated interior features built-in storage and roller blinds that can be lowered for shade and privacy. Wooden flooring used throughout the house provides a warm contrast to the concrete and white walls.

Earlier this year in Portugal NOARQ created a house featuring a large curving canopy, while Ernesto Pereira designed a home in Marco de Canaveses to appear into its arboreal setting.

Photography is by Nelson Garrido.