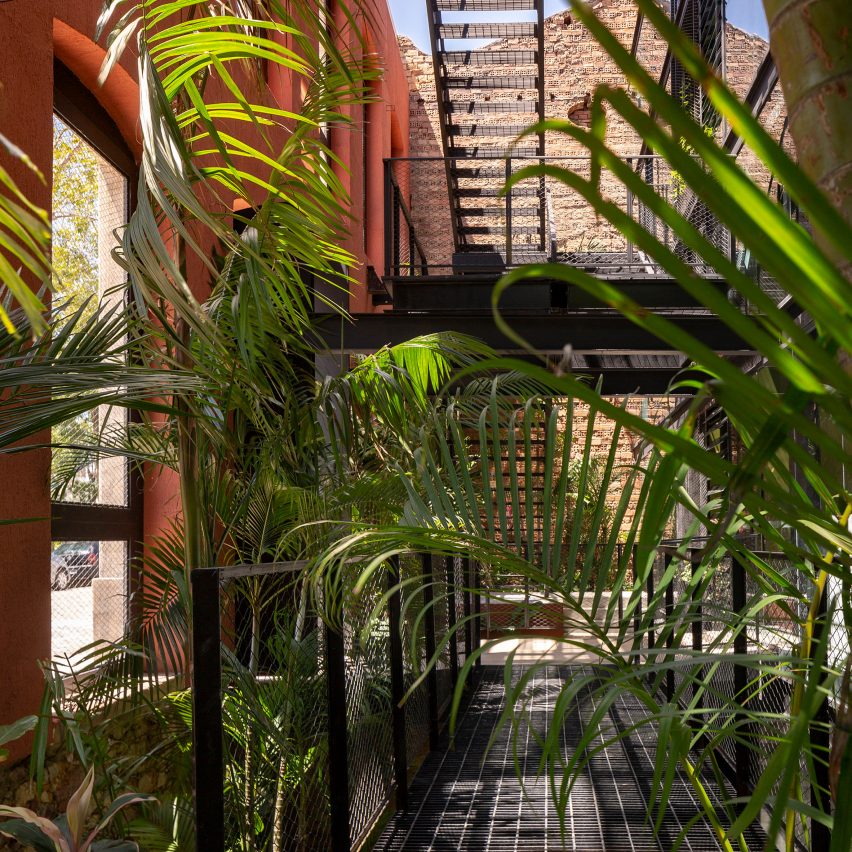 Workspaces look upon a mini jungle in this 125-year-old brick building in Manaus, Brazil, which has been thoughtfully revitalised by design studio Laurent Troost Architectures.

Called the Cassina Innovation House, the project entailed the adaptive reuse of a dilapidated historic structure in Manaus, the capital of the state of Amazonas.

The building, which now serves as a co-working venue, is located in an emerging digital district within the city. Its name was selected through a public vote organized by the municipality, which owns the building.

Its original structure was constructed in the late 1890s to house the luxurious Hotel Cassina, owned by an Italian man named Andrea Cassina.

After a financial crisis devastated the region, the building became a spot for gambling and prostitution called Cabaré Chinelo.

It closed around 1960 and began to deteriorate, according to local firm Laurent Troost Architectures.

Over the decades, the interior crumbled and vegetation overtook the building, resulting in a striking visual image that the architect wanted to honour in some way.

Troost said that artists and designers have long been intrigued by ruins, citing figures such as Piranesi, Gordon Matts-Clark and Robert Smithson.

“The beauty of the ruin’s imperfection raises interest and questions, and invites reflection on the past and the action of time and man in the city – and on heritage buildings in general,” the architect said.

The team opted to preserve the building’s exterior brick walls, along with the remaining foundation walls made of stone. It decided to reconstruct the interior using a prefabricated steel system, and to add a glazed volume atop the roof.

The facades were cleaned, and great care was taken to preserve original elements such as a plaster made of pigment from red sandstone powder. On the eastern elevation, new shading devices help mitigate solar heat gain.

“The east facade, hit by the rising sun, has received contemporary frames with tempered glass fins to create a ventilated, double-skin facade that keeps the heat out,” the studio said.

Inside, the team used the steel system to form new floors and a stairwell, along with space for an elevator. The system stands independent from the building’s outer shell.

“We have basically constructed a squared tower with four new columns,” Troost told Dezeen. “The perimeter beams of our structure have allowed us to anchor the existing facades to avoid the collapse towards the street.”

The metal system was prefabricated off-site, which sped up the project timeline.

Moreover, it reduced the number of on-site construction workers, which helped with social distancing – an important factor given that Manaus was hit hard by the coronavirus, the studio said.

A tropical garden was planted in a triple-height space just inside the front door.

“The building houses an exuberant garden behind the main facade, creating its very own microclimate,” the team said. “A walkway crosses the void over the garden, reminding one of Manaus’s intrinsic reason for being: the Amazon rainforest.”

Adjoining the stairs are open rooms with glazed walls that provide views of the interior garden. A range of flexible spaces can be found within the building, including work zones, meeting rooms and training areas.

The team noted that the building’s design allows for physical distancing and the circulation of fresh air, which will remain important considerations in our post-pandemic world.

Born in Brussels, Laurent Troost has worked in various countries and taught at several Brazilian universities.

Other projects by his studio include Casa Campinarana in Manaus, which won a 2019 Dezeen Award for Rural House of the Year. The concrete house features outdoor living areas and a swimming pool that are elevated above the forested surroundings.

Photography is by Joana França.