Monolithic concrete steps evocative of ancient Aztec temples surround open-air living spaces and gardens at the heart of this holiday home in the Mexican state of Oaxaca. French architect Ludwig Godefroy created the property as a weekend home for a client who wanted to escape from the Mexico City to the tranquility of Zicatela Beach.

Despite its proximity to the beach, the Mexico City-based architect designed the residence as a countryside retreat with a robust, insular character, rather than a typical beach house. 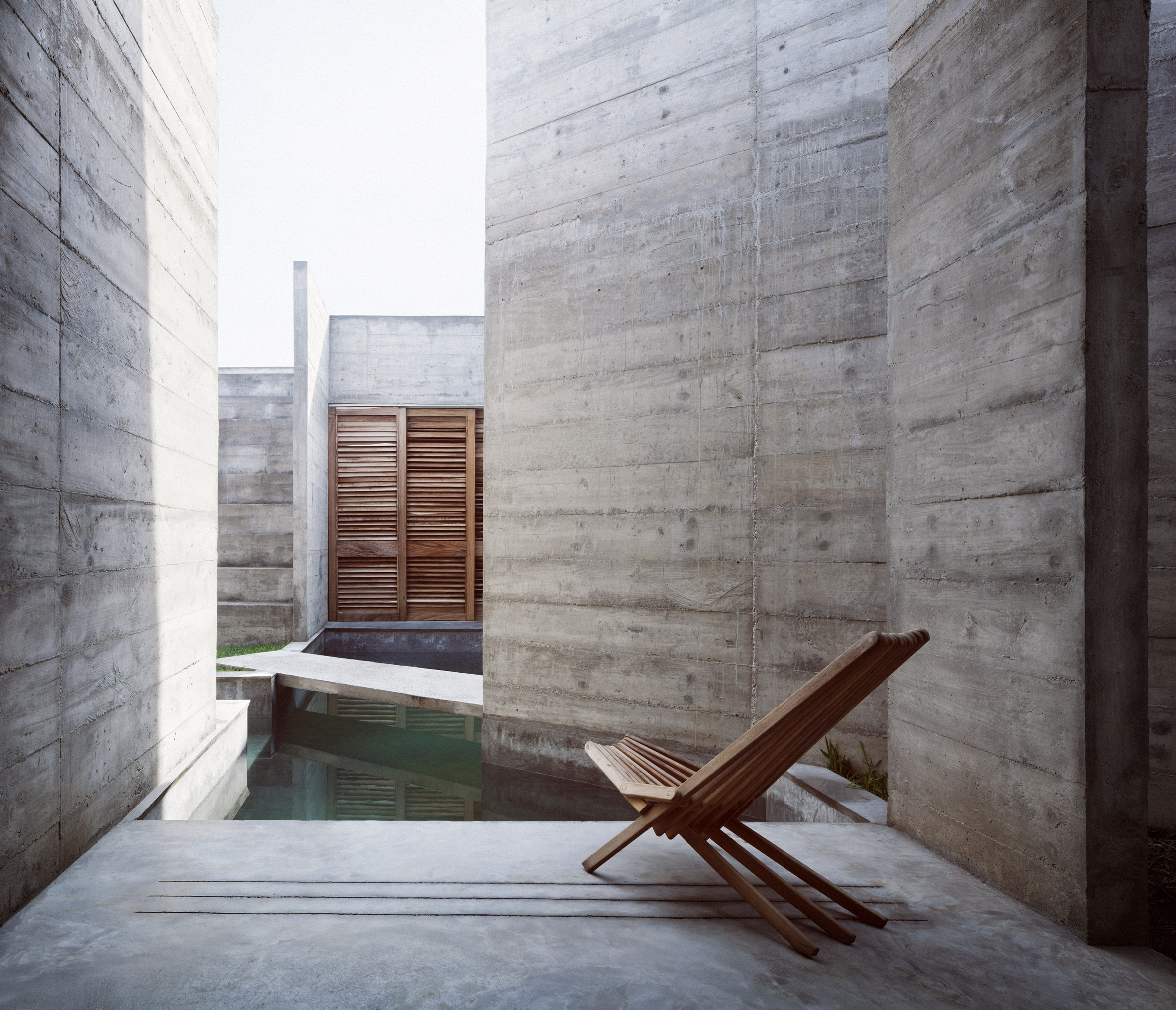 The building occupies a plot on top of a hill, with the beach on one side and mountains on the other. The side facing the mountains also faces onto fields of agave plants.

The house is designed to respond to the duality of its context, with the mountains influencing its robust, protective shell, while the wide, open feel of the beach is echoed in its outdoor spaces. 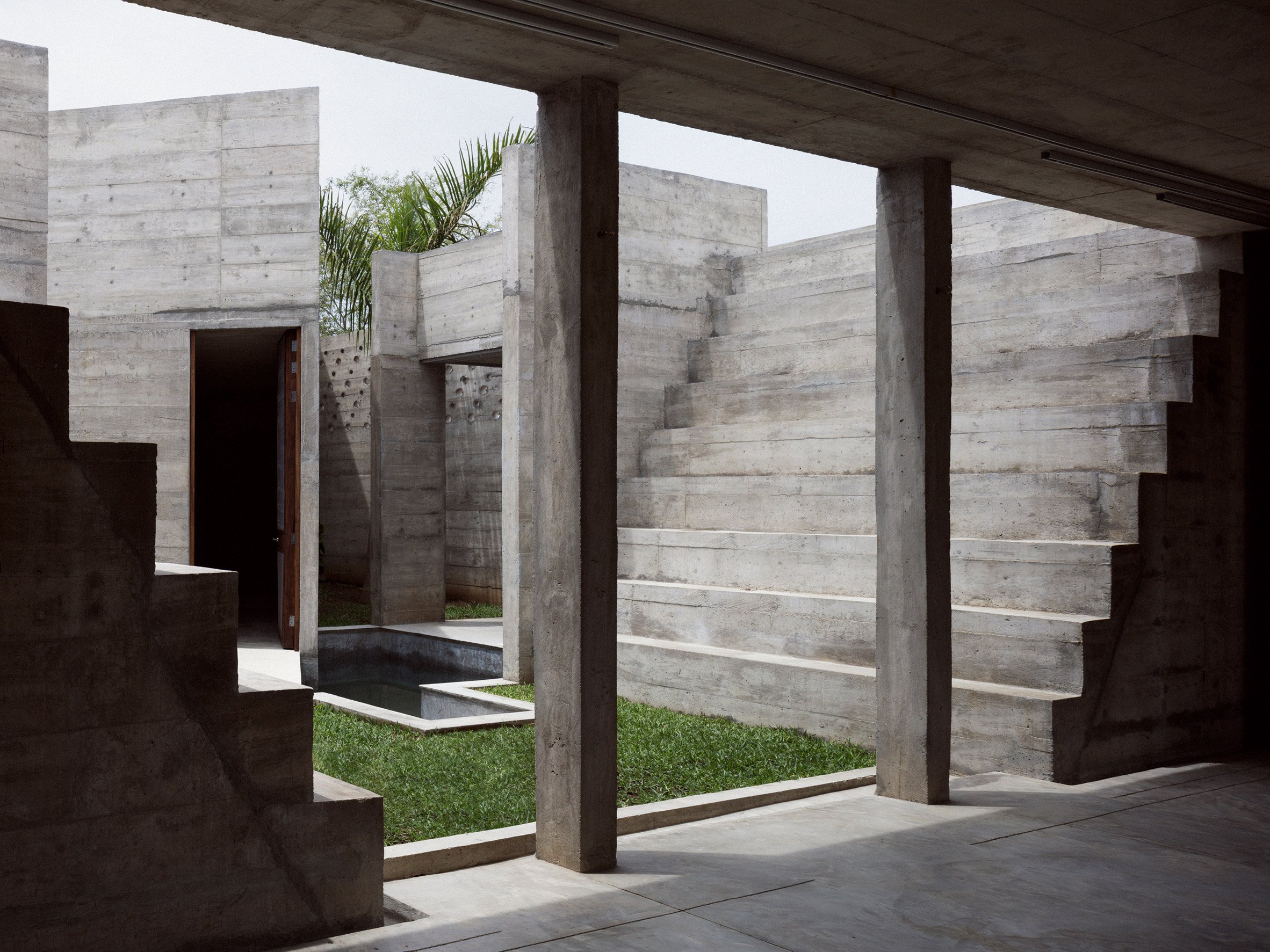 “The house is a bunker on the outside protecting a Mexican pyramid on the inside,” claimed the architect, who was influenced both by the ancient temples of his adopted home and by the concrete structures dotted around the landscape of Normandy where he was born. 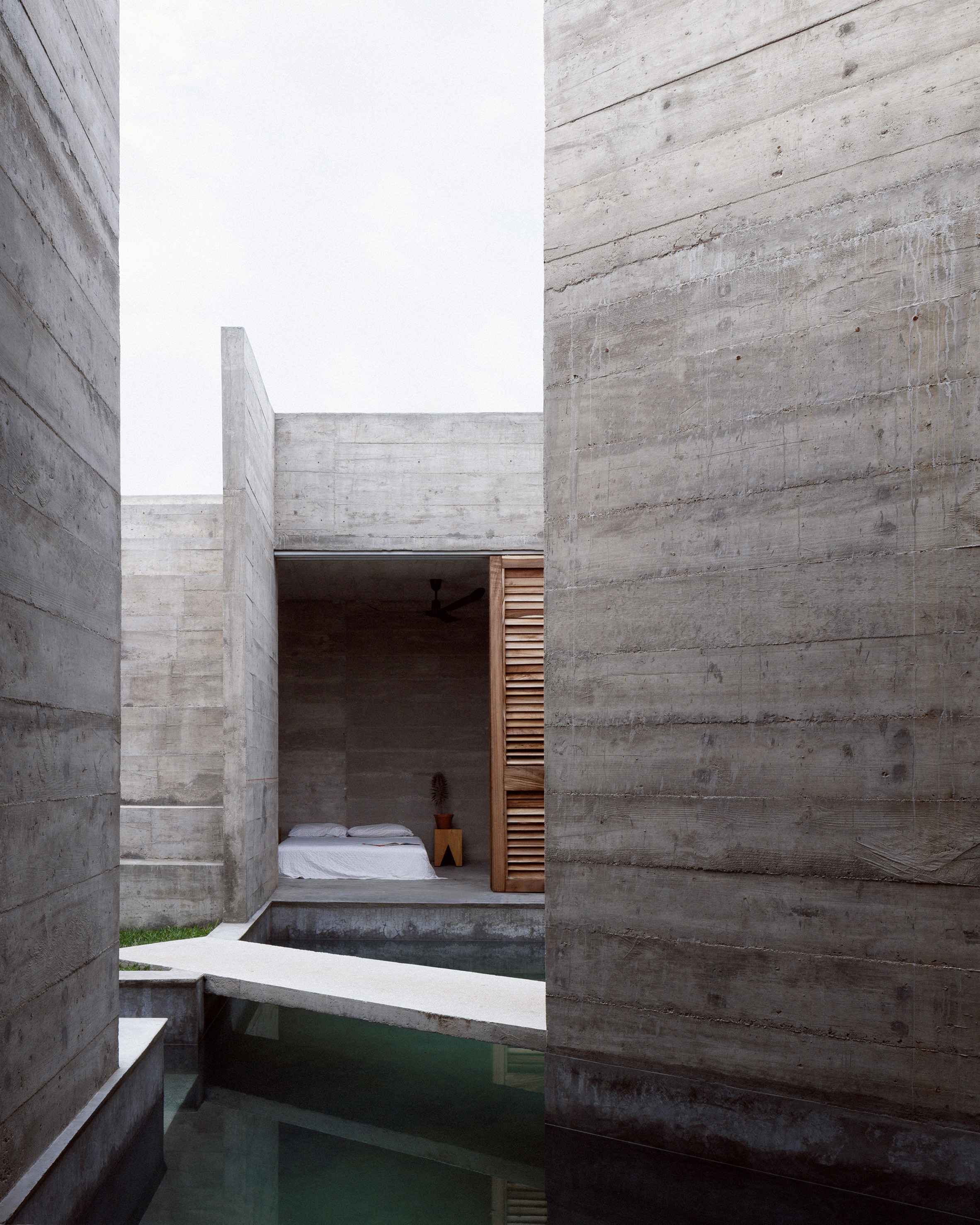 “It uses a typology of defensive architecture, where a wall surrounds the terrain completely,” Godefroy added, “helping to create a 100 percent controlled area on the inside and turning it into an open-air fortress with only one main view towards the sky, the only permanent element in time.” 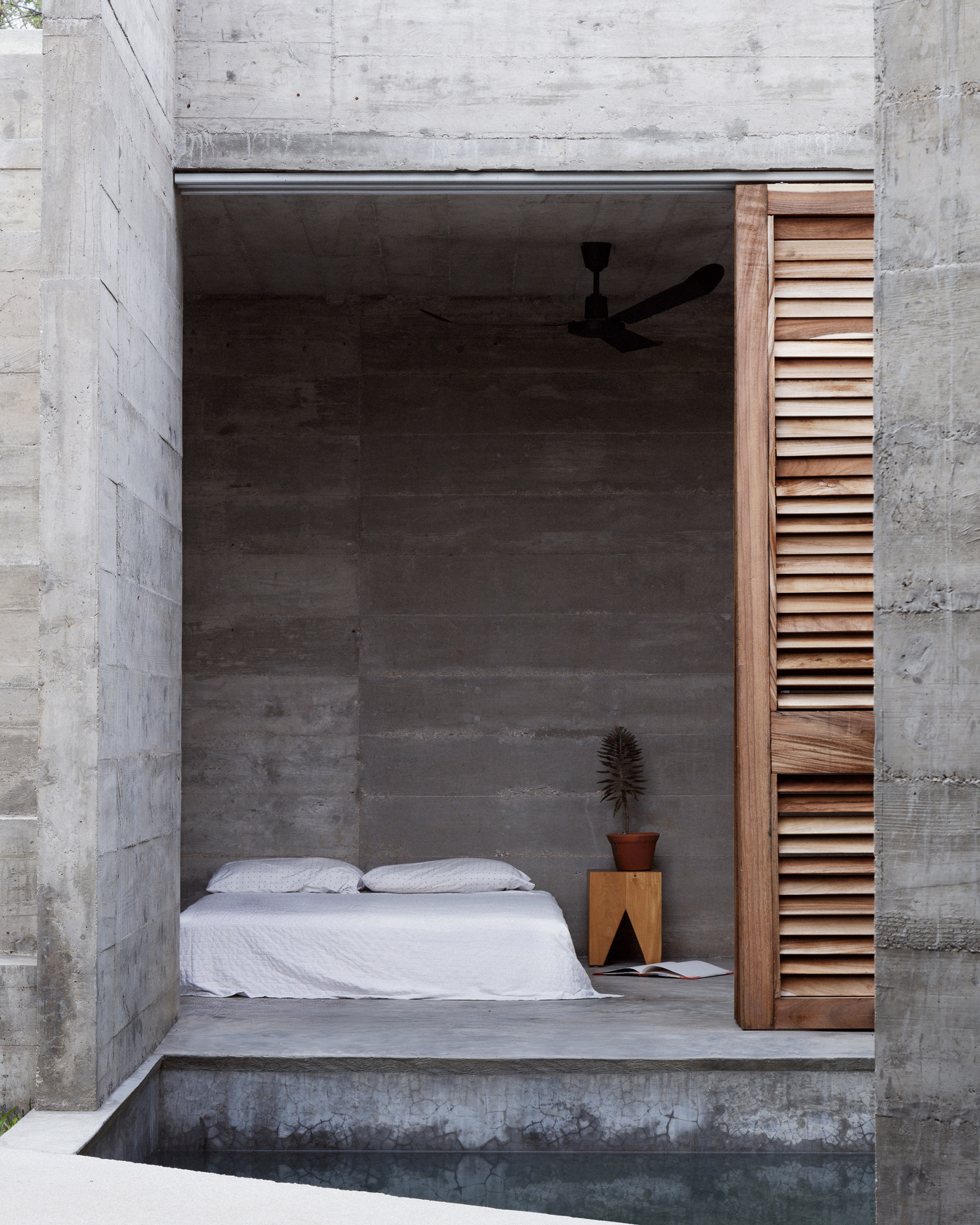 From outside, the building appears as an entirely solid concrete mass, punctuated on one side by a pair of openings containing sturdy wooden doors.

One set of doors opens outwards to provide access to a garage, while the other pivots on its central axis to form the main entrance. 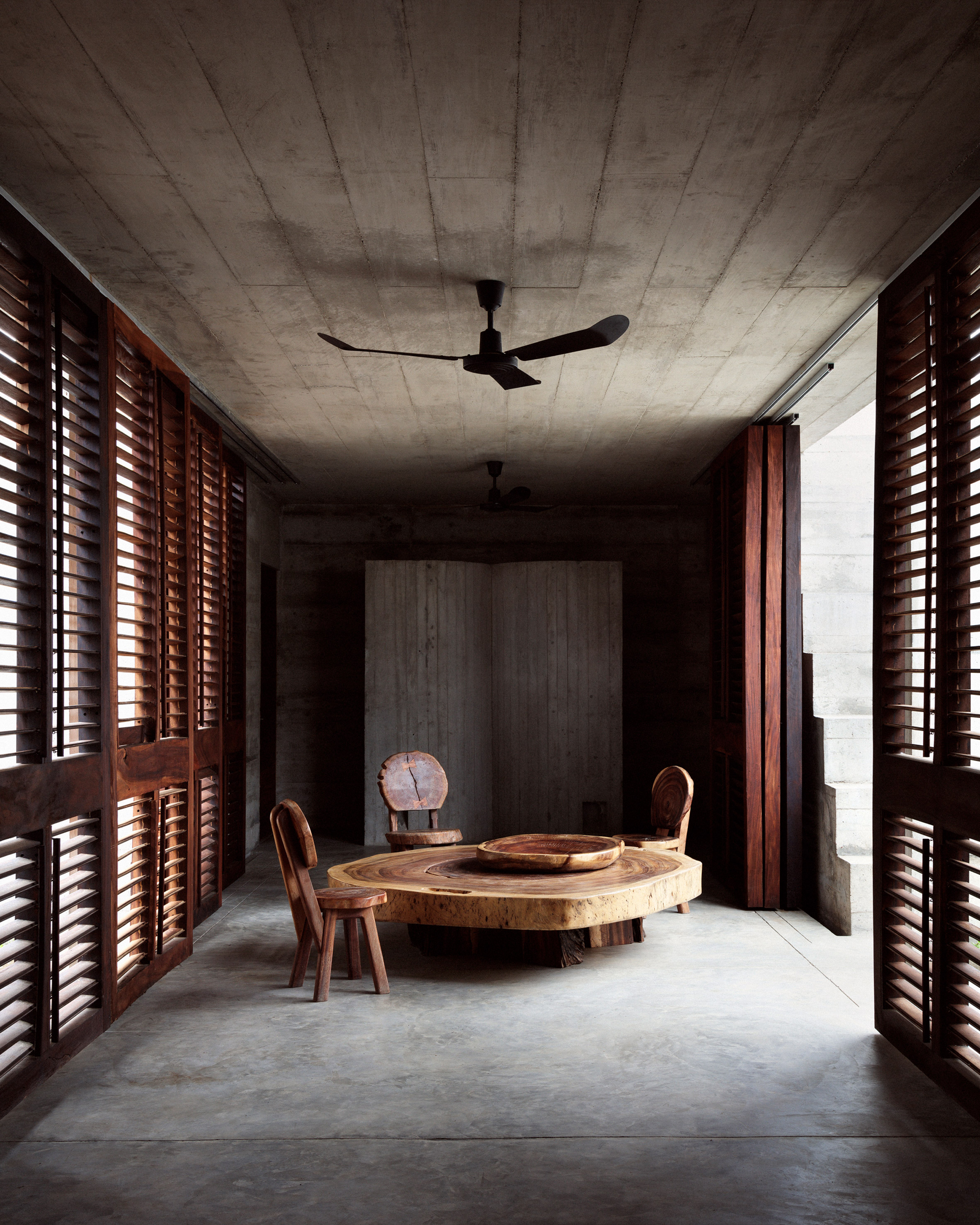 This opening leads into a garden courtyard flanked on either side by stairs that ascend onto the building’s roof. The stairs are cast alongside wider steps that can be used for sitting or displaying potted plants.

Beyond the garden is a covered patio that spans the width of the house and accommodates the main living area. A kitchen is situated at one end, with a large, low table made from a section of a tree trunk providing the focal point of the communal space. 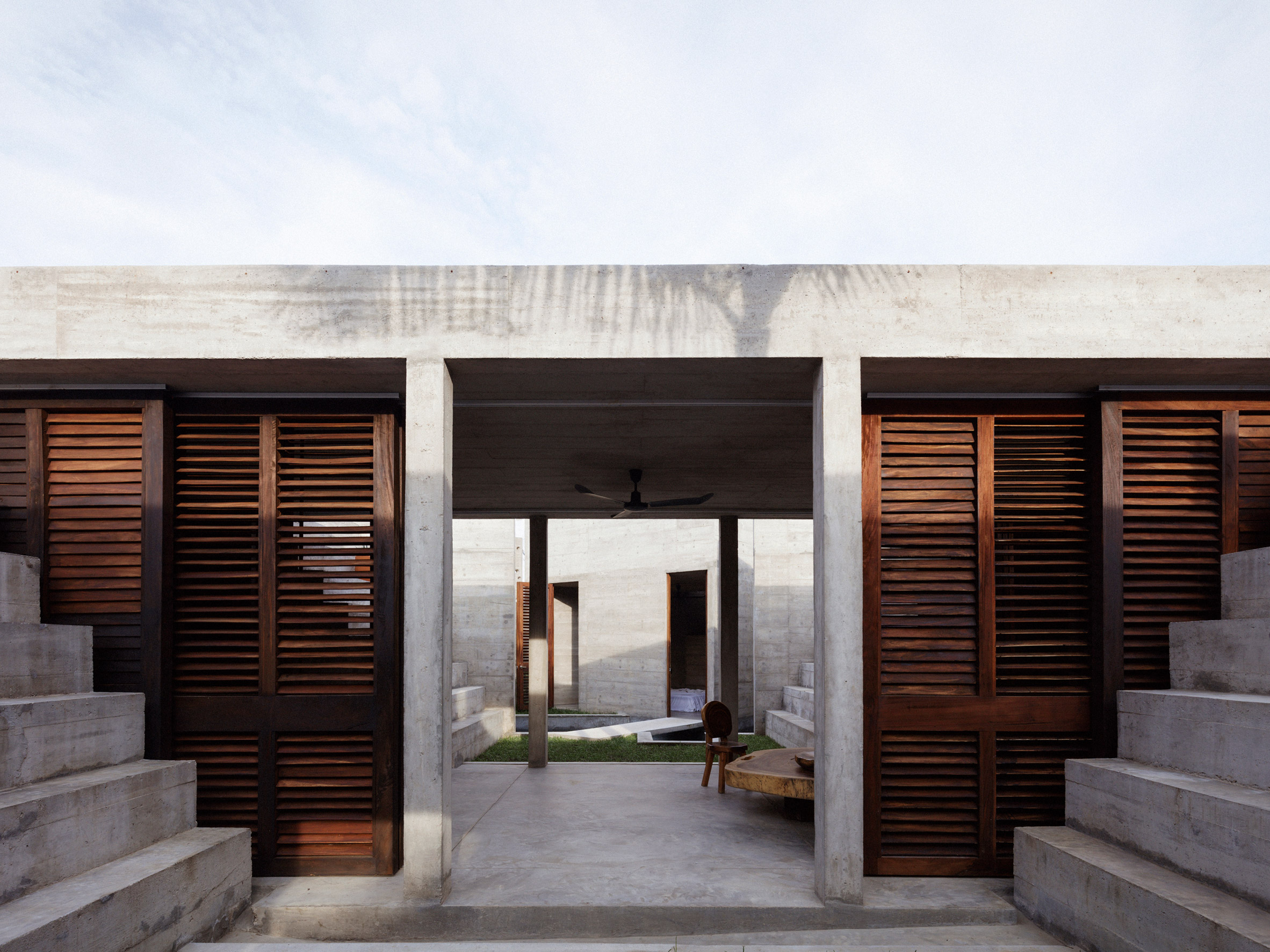 Sliding louvred screens lining the living area can be used to close off this space, or retracted to open it up to the gardens on either side.

The open-air space to the rear of the building accommodates a small swimming pool. There are bedrooms at either end of the pool, and a third bedroom is contained in an angled volume that is reached using a bridge across the pool. 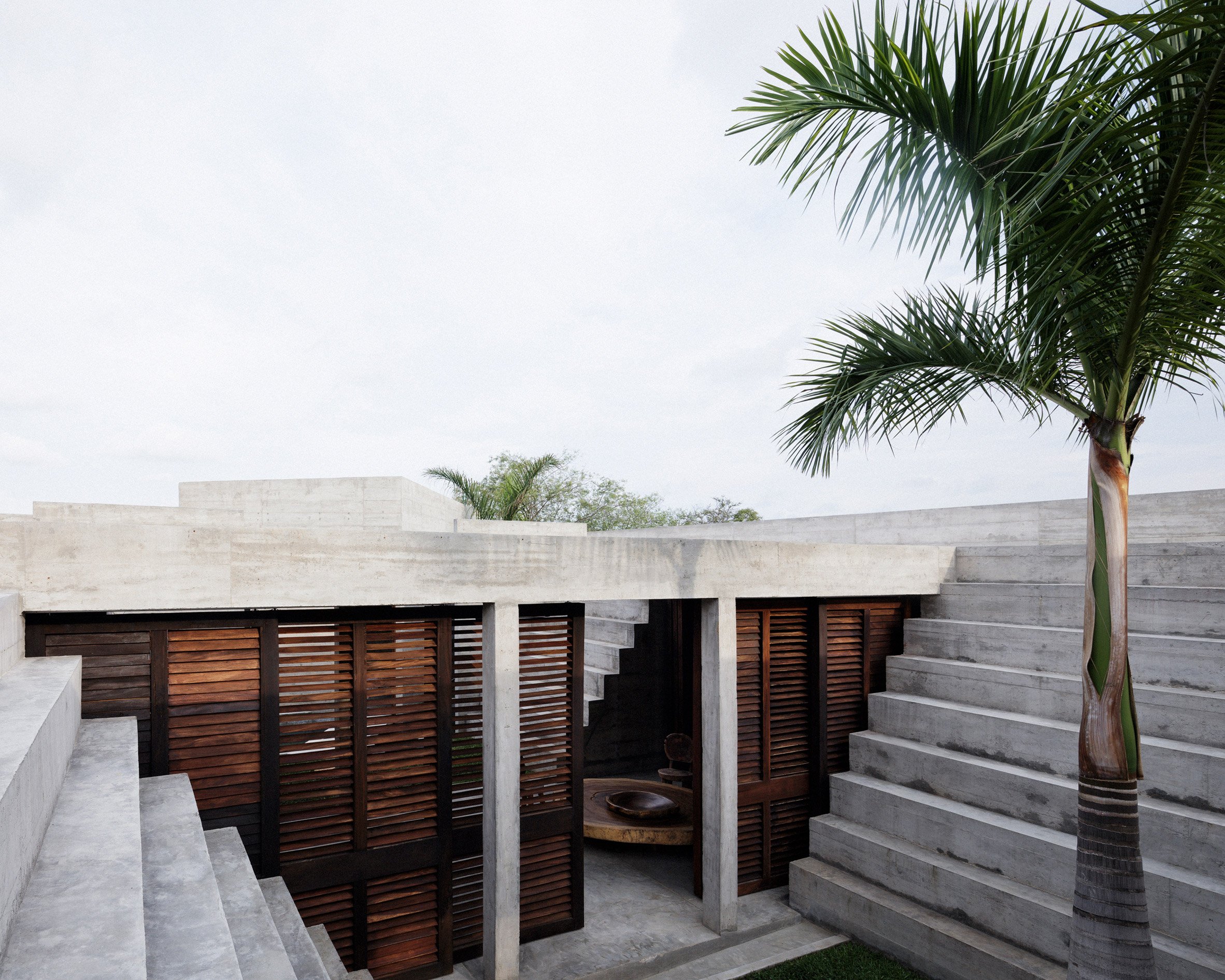 The board-marked concrete used for the building’s structure is left exposed both externally and internally throughout the house.

Carefully placed openings in the walls and roofs of the various rooms enable daylight to wash across these textured surfaces. The only other material present is the wood used for the doors and louvred screens.