The first part of Thomas Heatherwick‘s renovation of a former grain silo building in Cape Town‘s harbour has been completed, with the opening of a hotel featuring bulging windows. 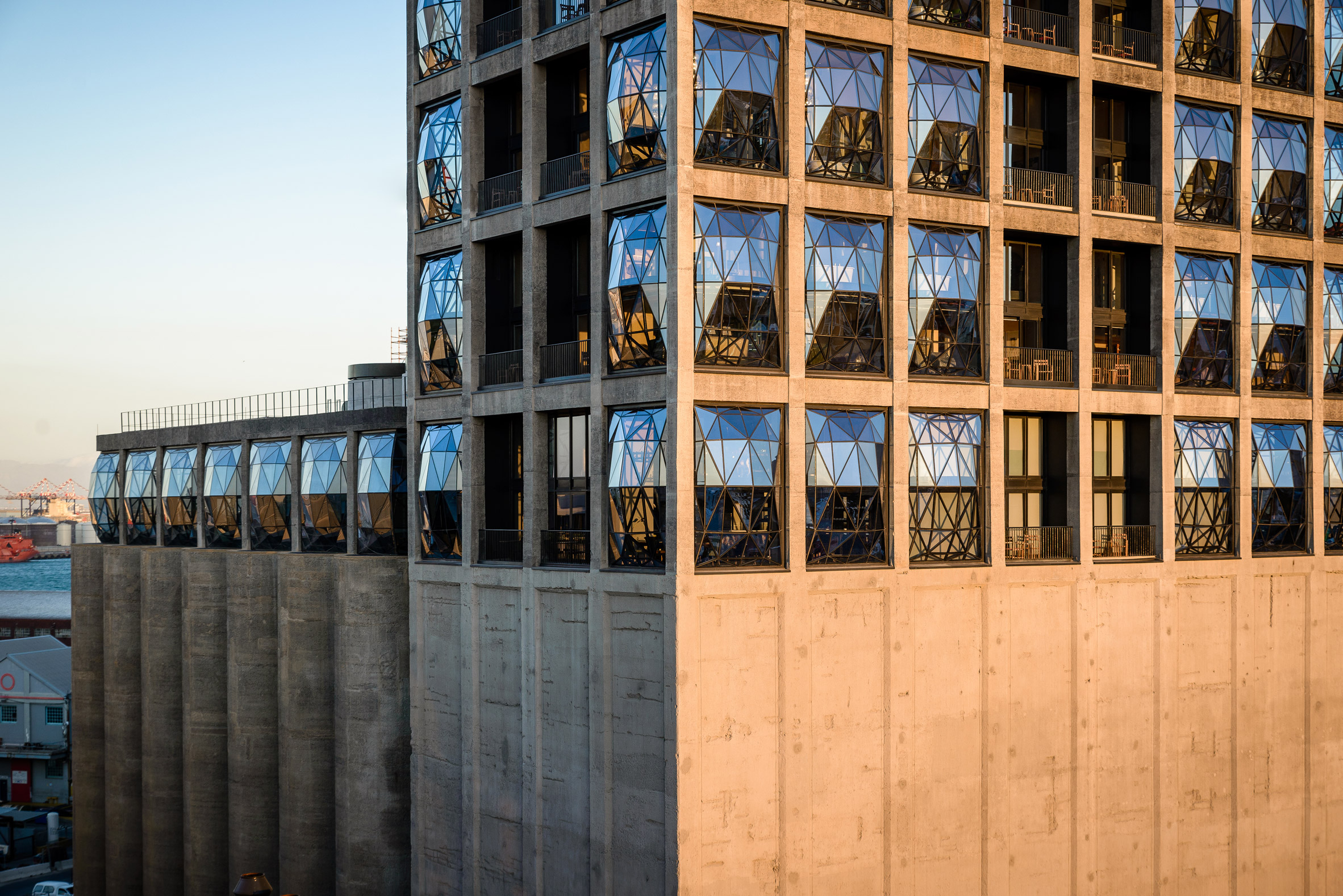 Heatherwick Studio is overseeing the conversion of the building, in which the Zeitz Museum of Contemporary Art Africa (MOCAA) will open later this year.

Occupying six floors above the museum, The Royal Portfolio hotel is accommodated within the grain elevator portion of the building where grain was once lifted by elevators from the track bed to the top so it could be weighed, cleaned, bagged, stored and distributed. 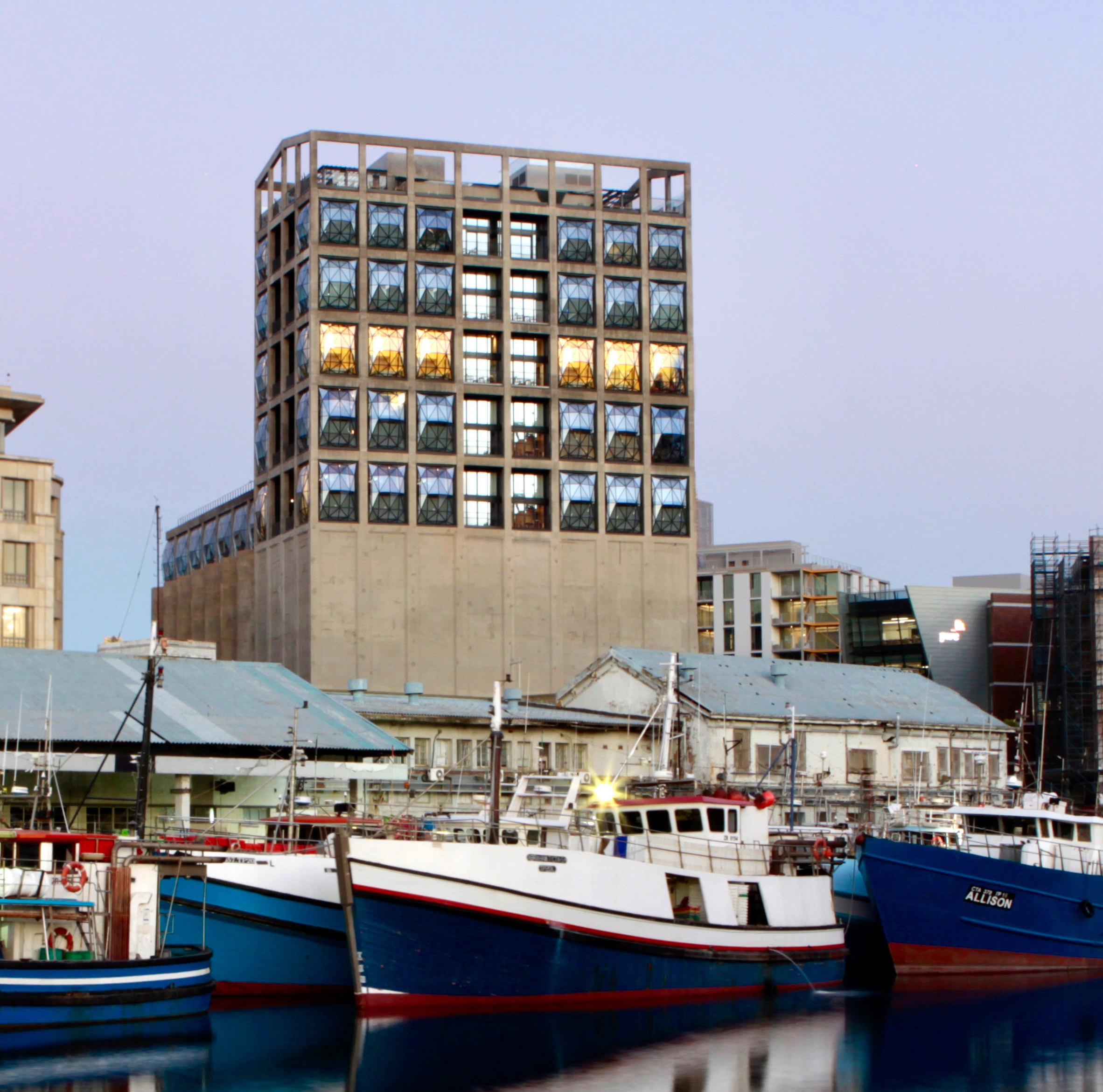 The grain silo opened in 1924 and operated for nearly 80 years as an international trade and export facility at the heart of Table Bay harbour. It is now located within the mixed-use V&A Waterfront area, alongside a retail mall, restaurants, cafes and residences.

Heatherwick’s refurbishment retains many of the building’s original features, including 42 cylindrical storage silos that will be carved out internally to form a grand atrium for the museum. 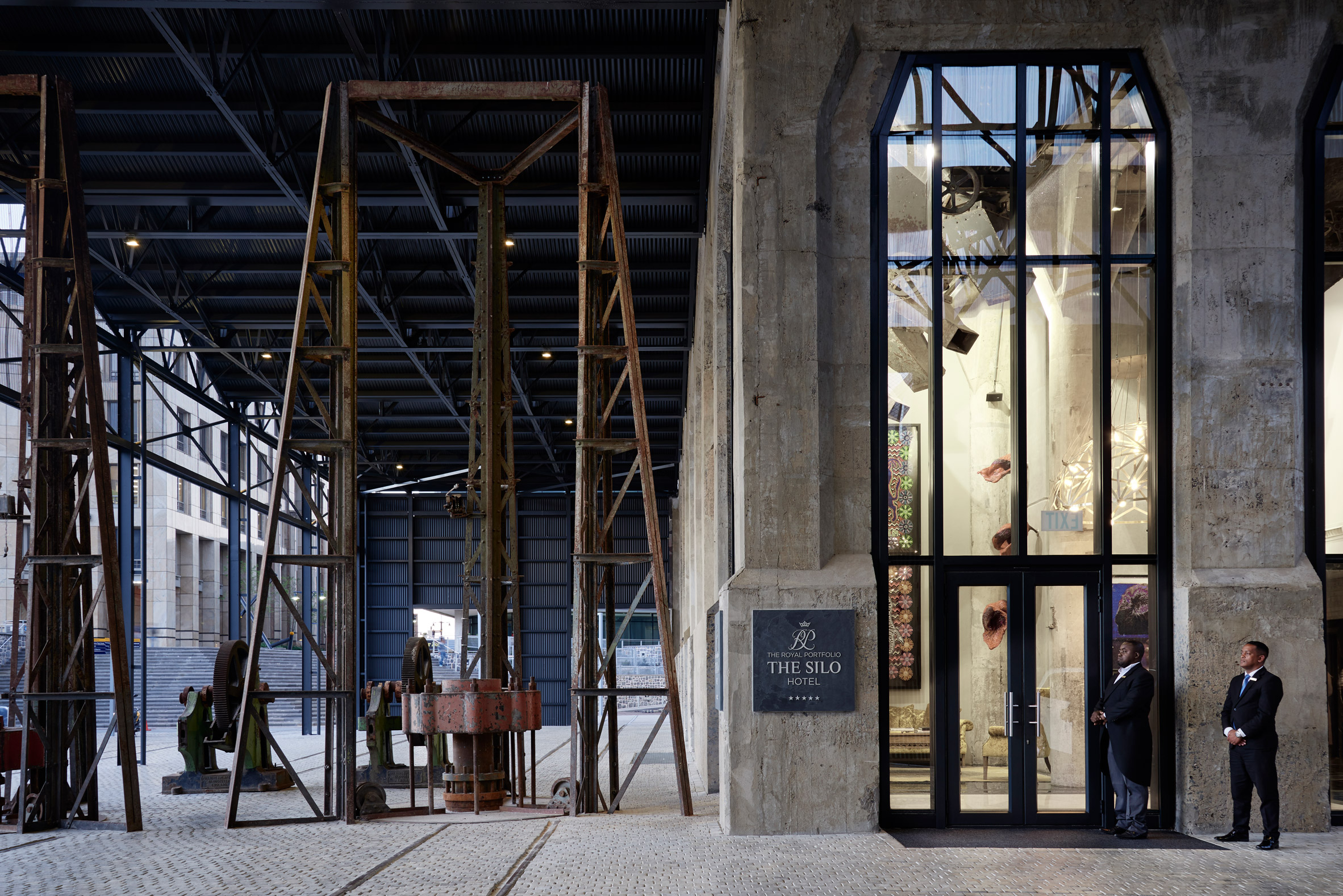 The most visible change to the exterior is the rows of pillowed glass windows inserted into the existing concrete frame of the upper floors.

The windows provide enhanced views from the various suites and transform the upper part of the building into a glowing beacon when illuminated from within at night. 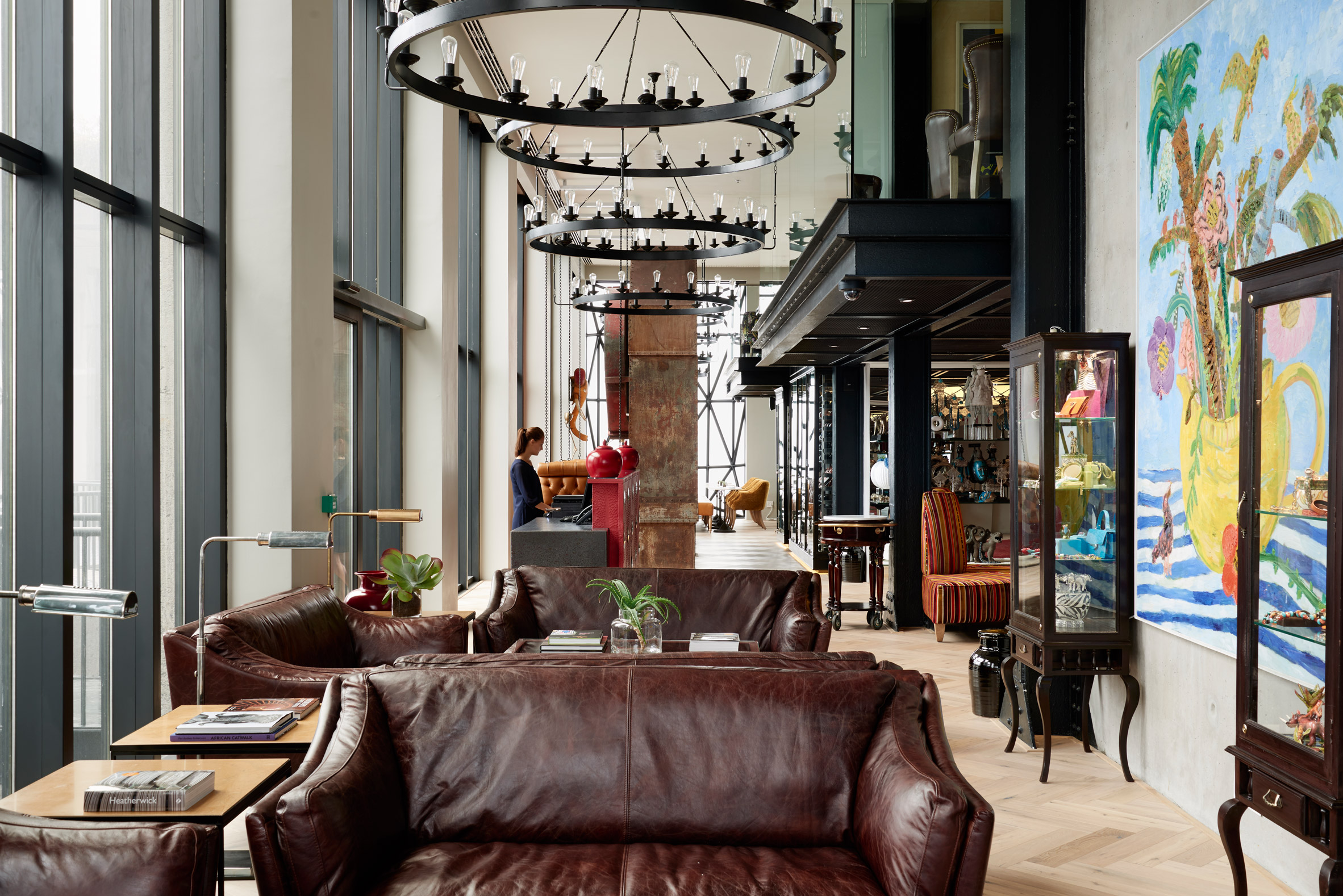 The hotel’s interiors were designed by The Royal Portfolio founder and owner, Liz Biden, whose eclectic approach to the decor is intended to complement the contrast between old and new that now defines the building. 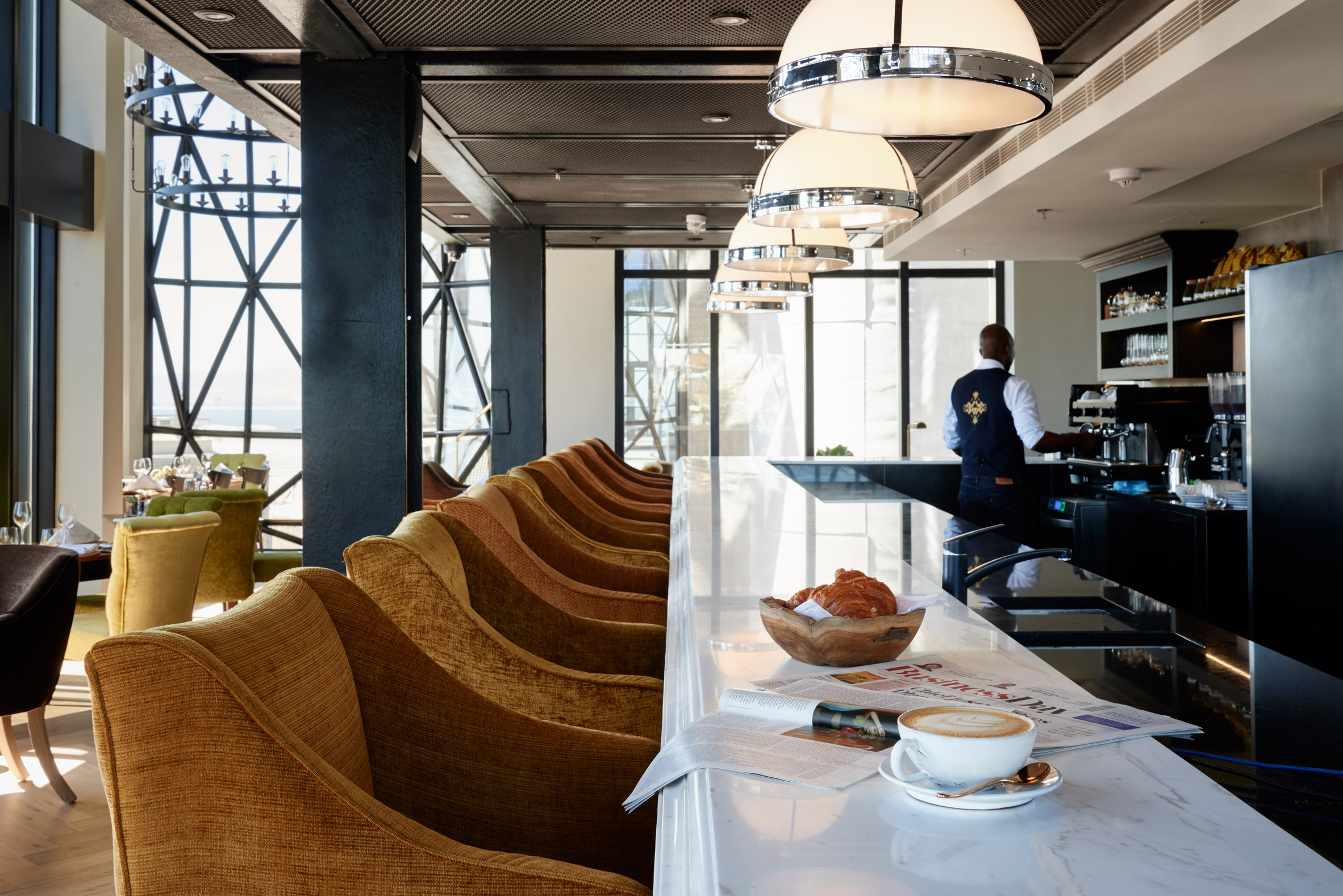 “My goal has always been to pay tribute to luxury and [provide] comfort for our guests,” said Biden. “This has meant balancing the stark and industrial style of the architecture with aspects of classic glamour and modern comfort.” 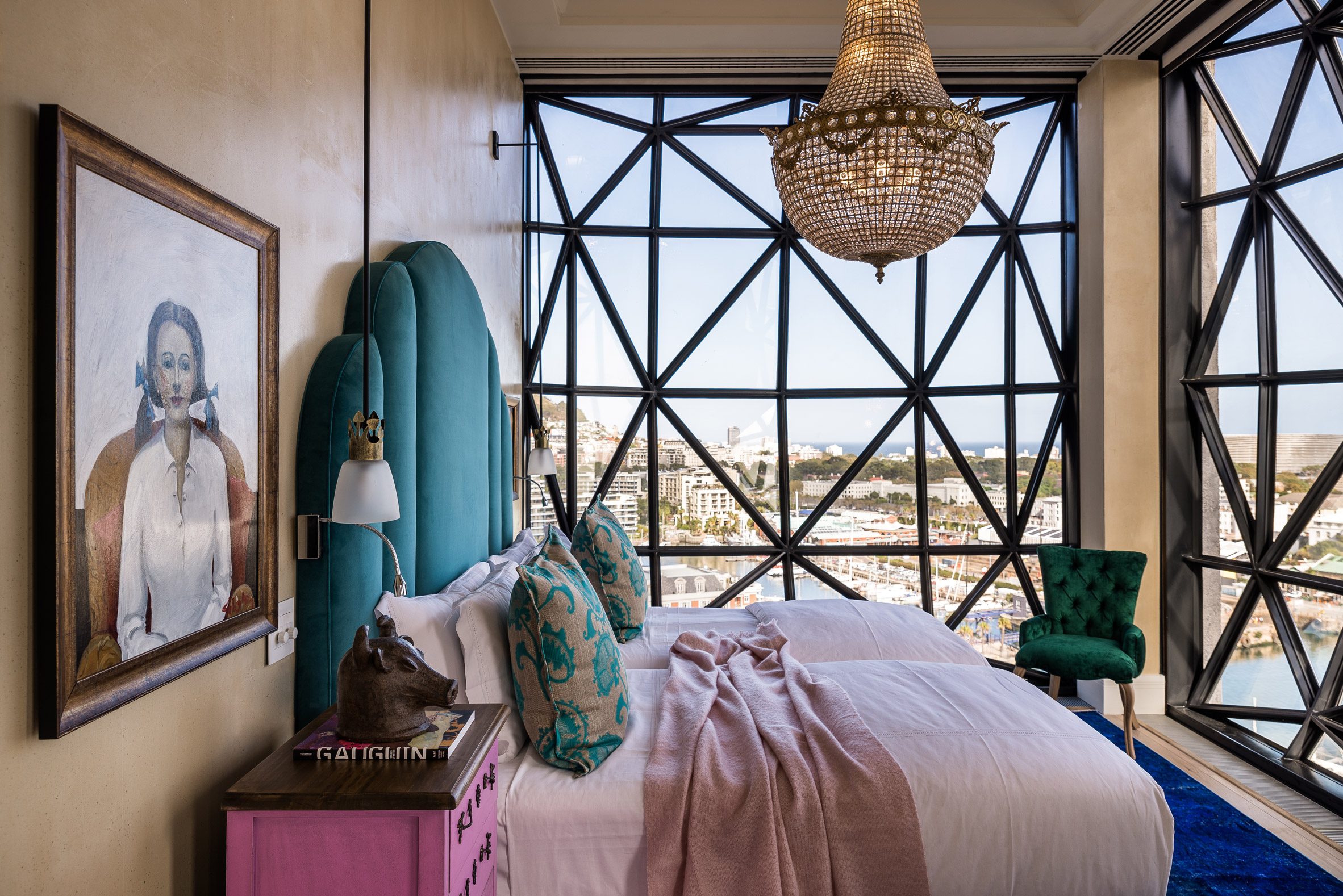 The Silo Hotel lobby on the ground floor features a chandelier by South African designer Haldane Martin that is suspended alongside the original grain hoppers. Other artworks and vintage furnishings emphasise the eclectic theme.

On the sixth floor are a bar and cafe combining colourful artworks by African artists with plush upholstered furniture, including teal leather stools manufactured by local firm Moorgas & Sons. 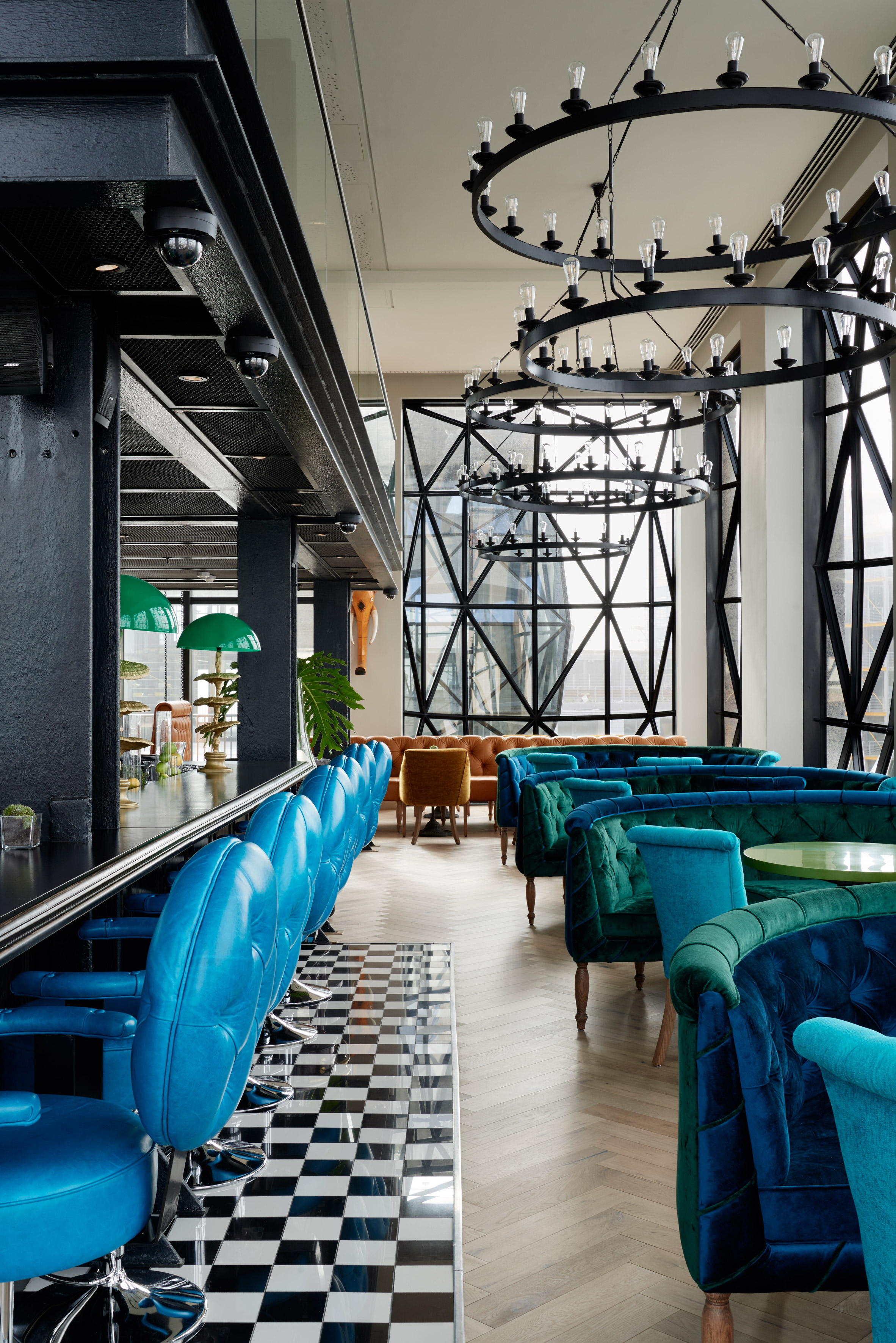 Industrial-styled chandeliers on this level feature steel rings originally used inside the grain elevator. Elsewhere throughout the building are 80 crystal chandeliers that were handmade in Egypt.

Another bar offering panoramic views of Table Mountain and Robben Island is located on the rooftop. There is also a spa incorporating five treatment rooms, a sauna and a gym on the fourth floor. 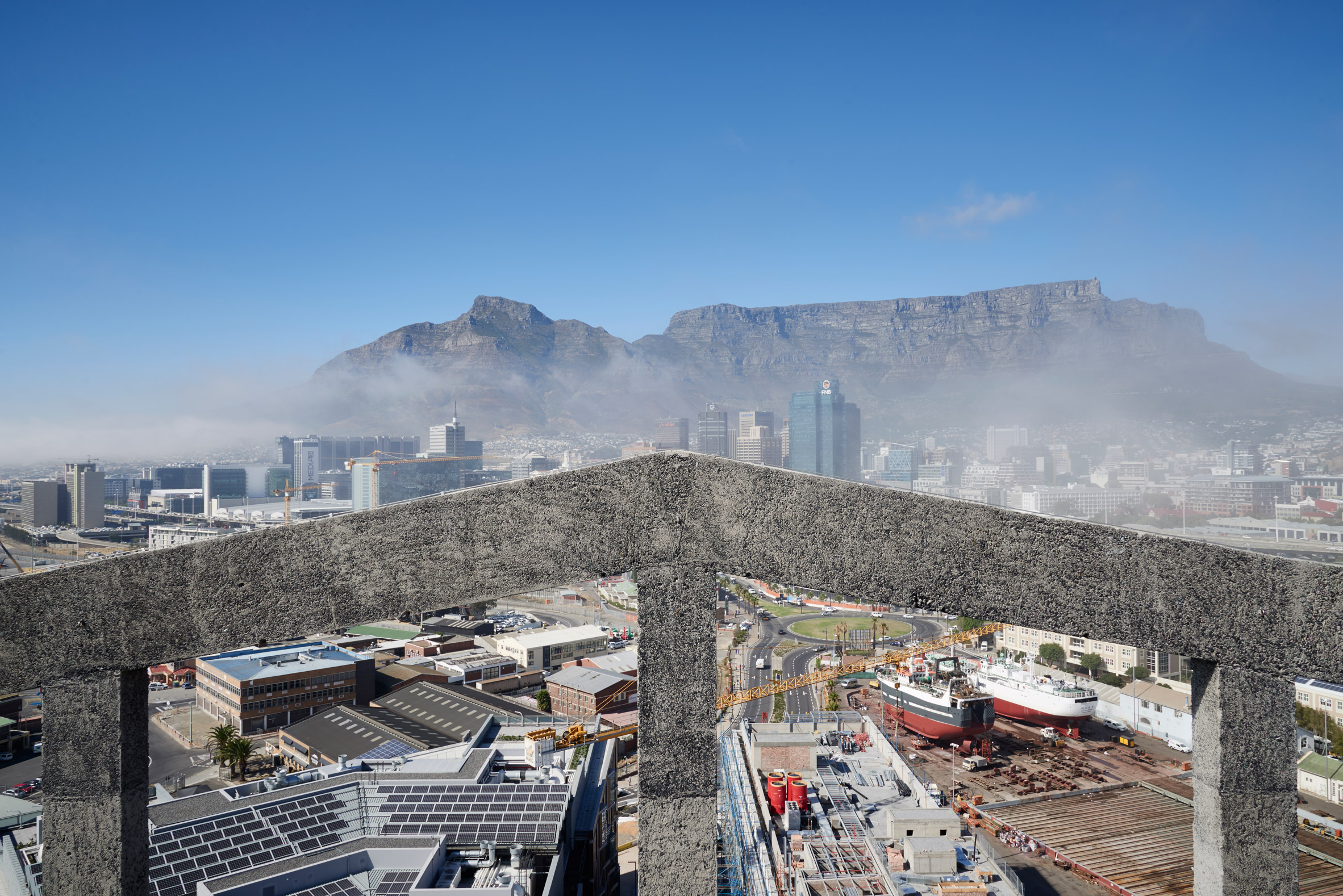 Each of the 28 guest rooms and suites is unique, with fabrics, wallpapers and furnishings contributing to the individual character of these spaces.

The hotel has its own private gallery called The Vault, which is situated in the basement and will exhibit work by emerging African artists on a biannual rotation. 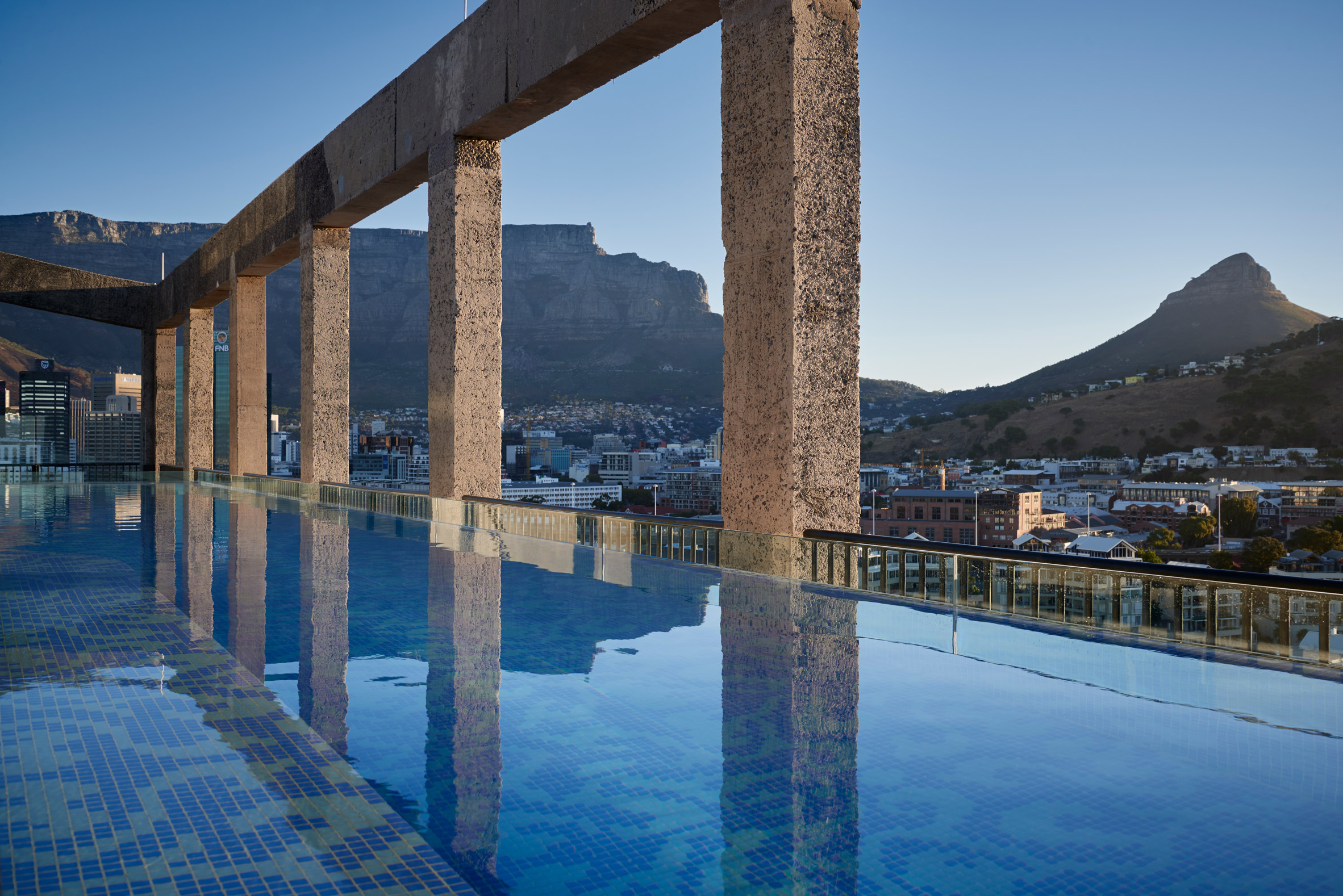 The Zeitz MOCAA art museum situated within the complex is a partnership between the V&A Waterfront and former Puma CEO and chairman, Jochen Zeitz, whose collection was gifted to the non-profit organisation and will form its founding collection. The museum will open in late September 2017. 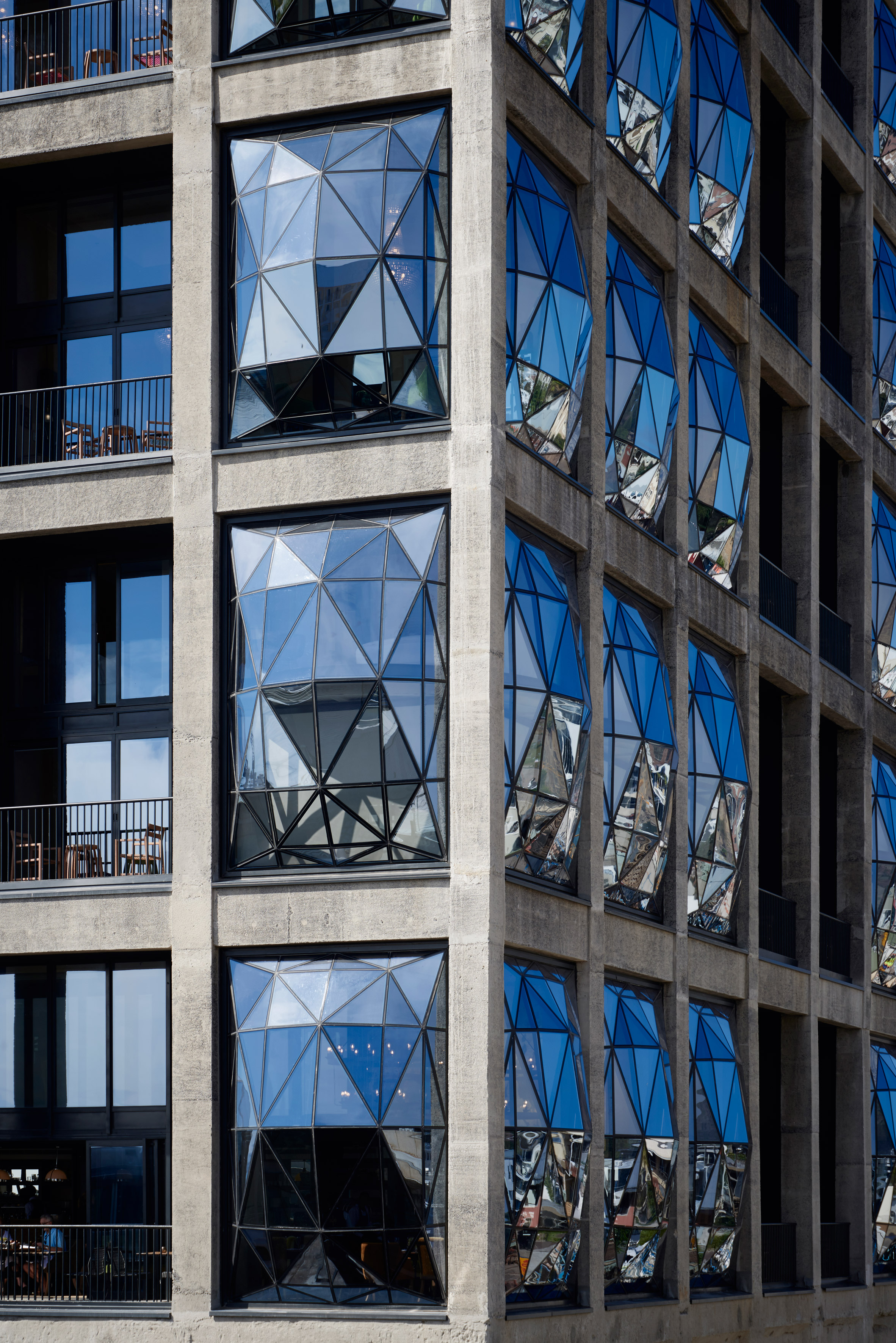 Heatherwick – who placed at number 23 on the Dezeen Hot List – is currently working on a honeycomb-like staircase structure for the vast Hudson Yards development on Manhattan’s West Side.

His firm is also working on a new Mountain View office campus for Google, designed in collaboration with Danish architecture firm BIG. 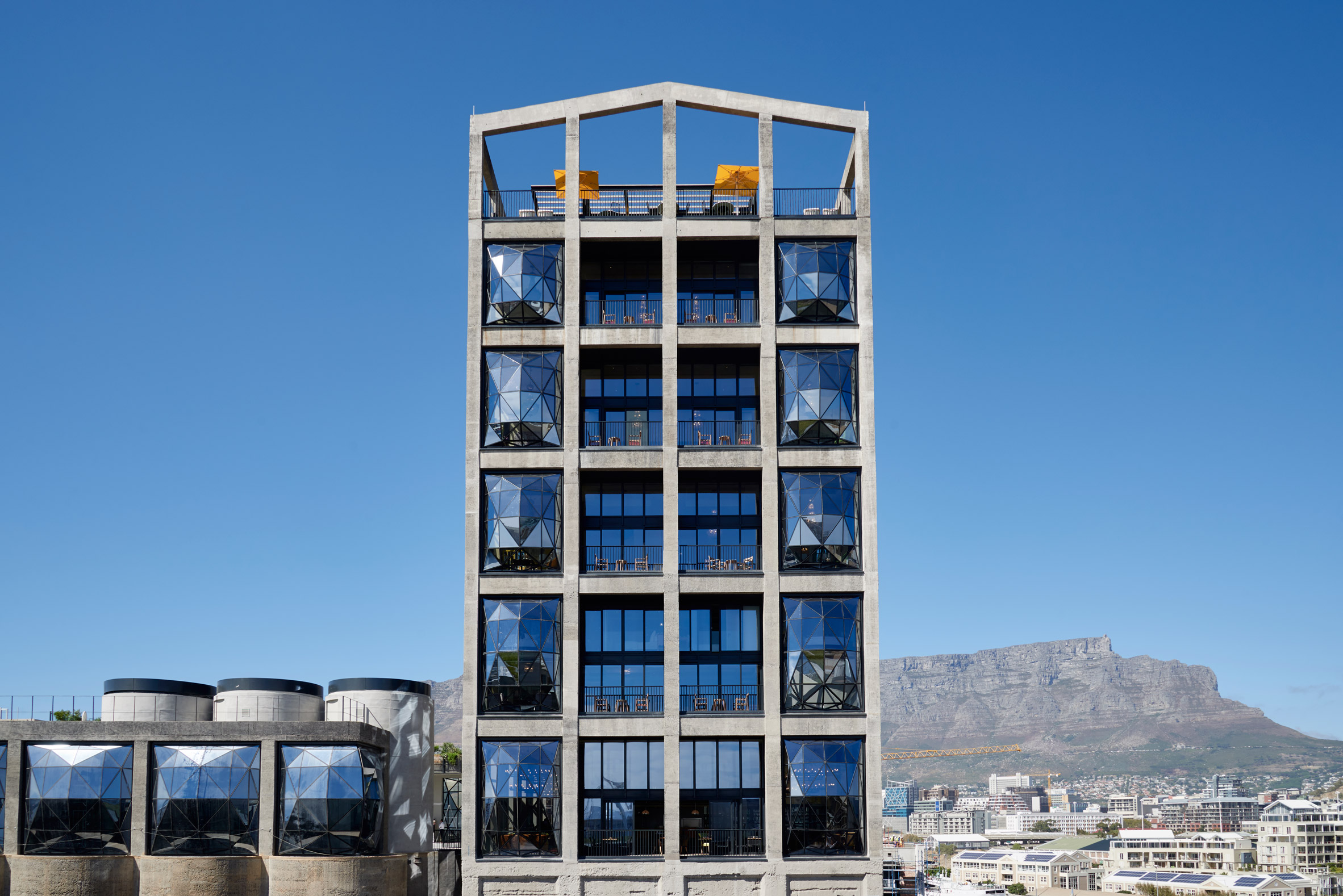 Last month, Heatherwick’s Garden Bridge project in London received a major setback when mayor Sadiq Khan withdrew his support by refusing to sign the vital financial guarantees that would allow building to go ahead.