Architect Pascal Madoc Jones has added a new house to a Victorian terrace in north London, featuring a curved recess intended to give the street a more distinctive end.

Madoc Architecture designed the King’s Crescent property for a speculative developer, on a site on  Stoke Newington that was previously occupied by a pair of disused garages. 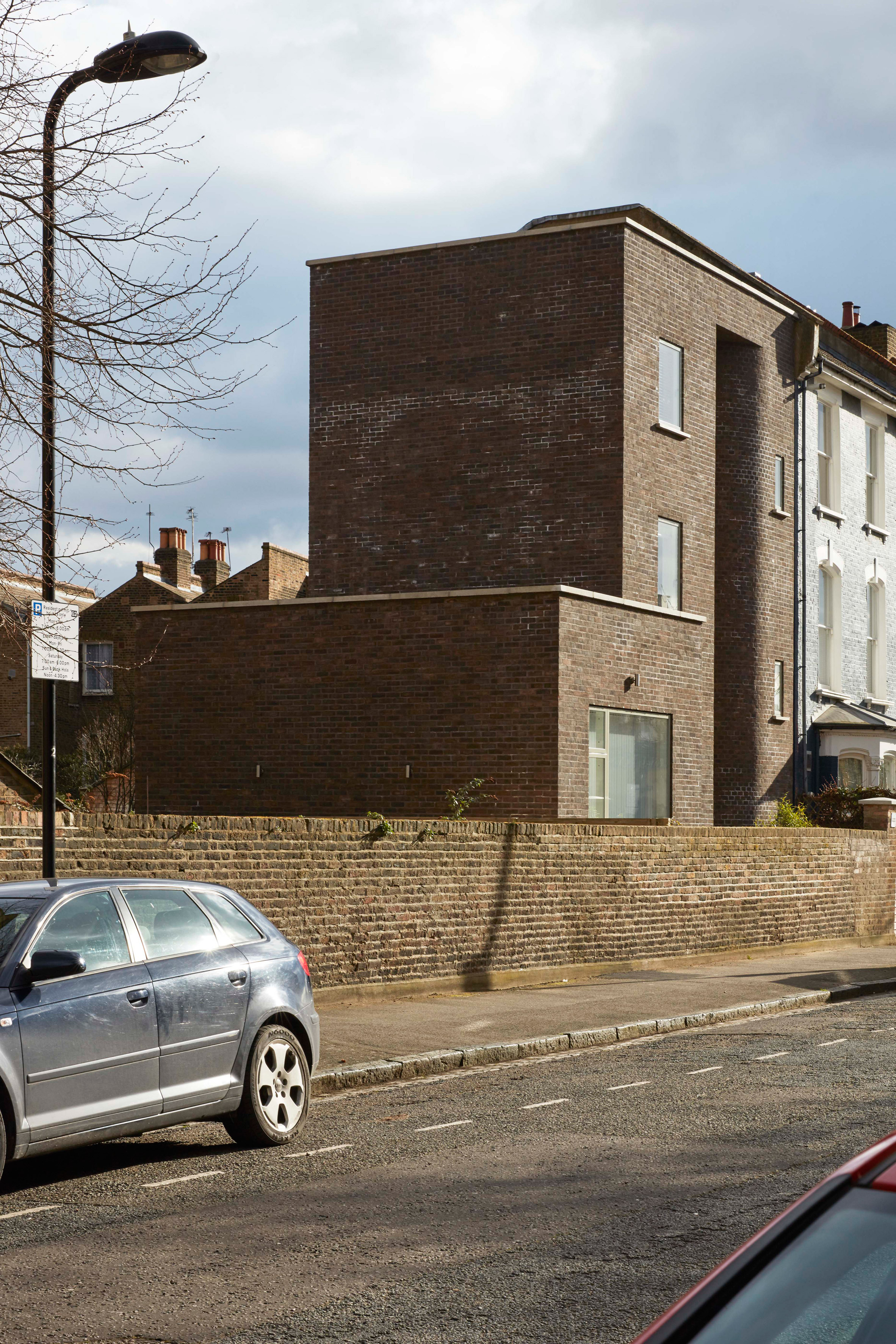 Several previous planning applications for the site had failed due to various restrictions, resulting from the dense residential setting.

Any new building on the site was required to occupy the same footprint as the garages. In addition, because the existing terrace terminated in a blank gable wall, planning conditions specified that the new gable could not contain any windows above ground floor.

To add some interest to the elevation and to formally complete the terrace, Madoc’s studio introduced a curved wall that leads the eye round from the street towards the garden. 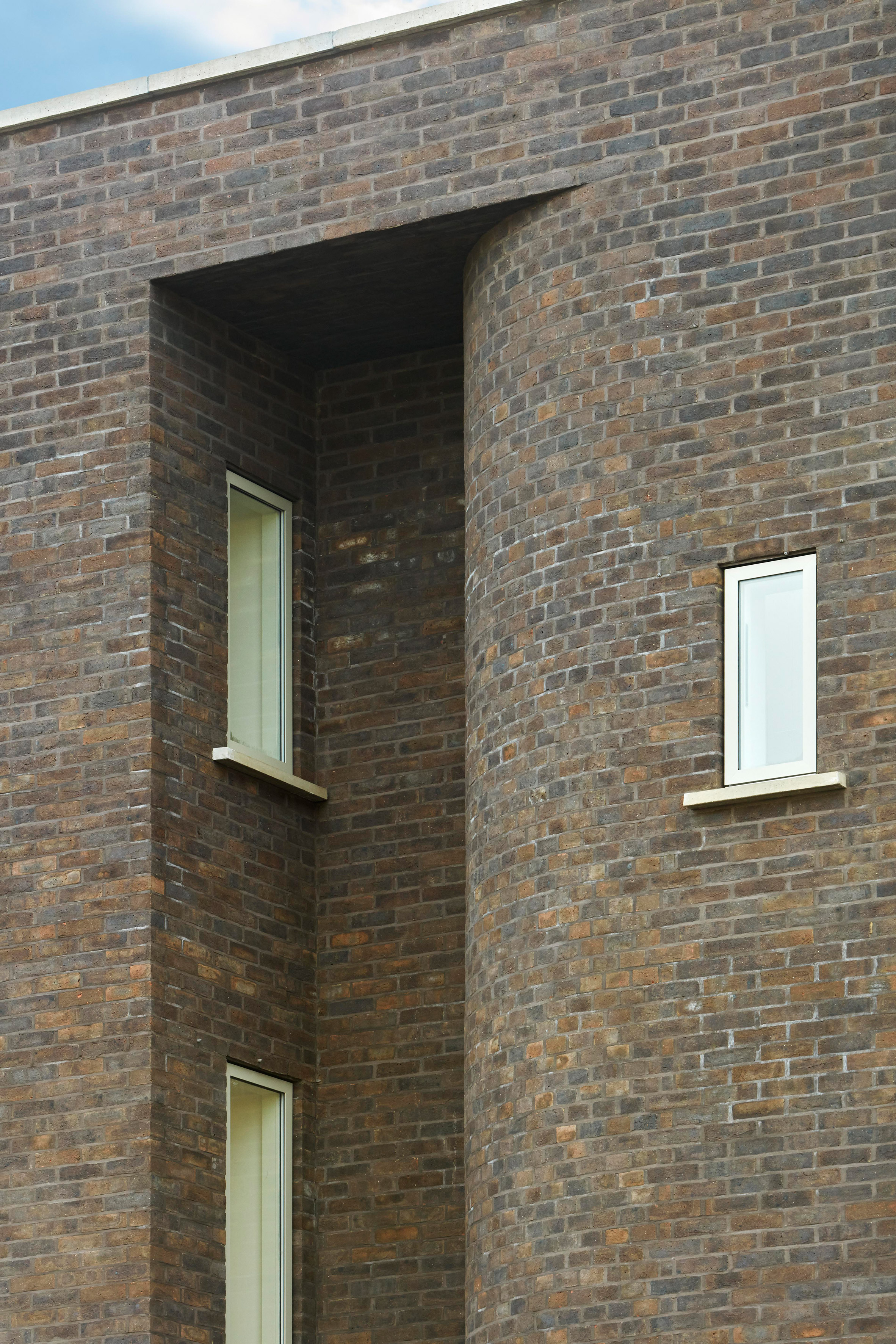 The aperture extends up to a soffit aligned with the extended eaves of the existing terrace, to ensure a sense of continuation from the old buildings to the new.

“Conceptually the front elevation stretches the existing street elevation round the curve of the terrace to the recessed front door,” the architect suggested.

“The indentation this creates separates the orthogonal volume and marks it out as the new bookend to the street.” 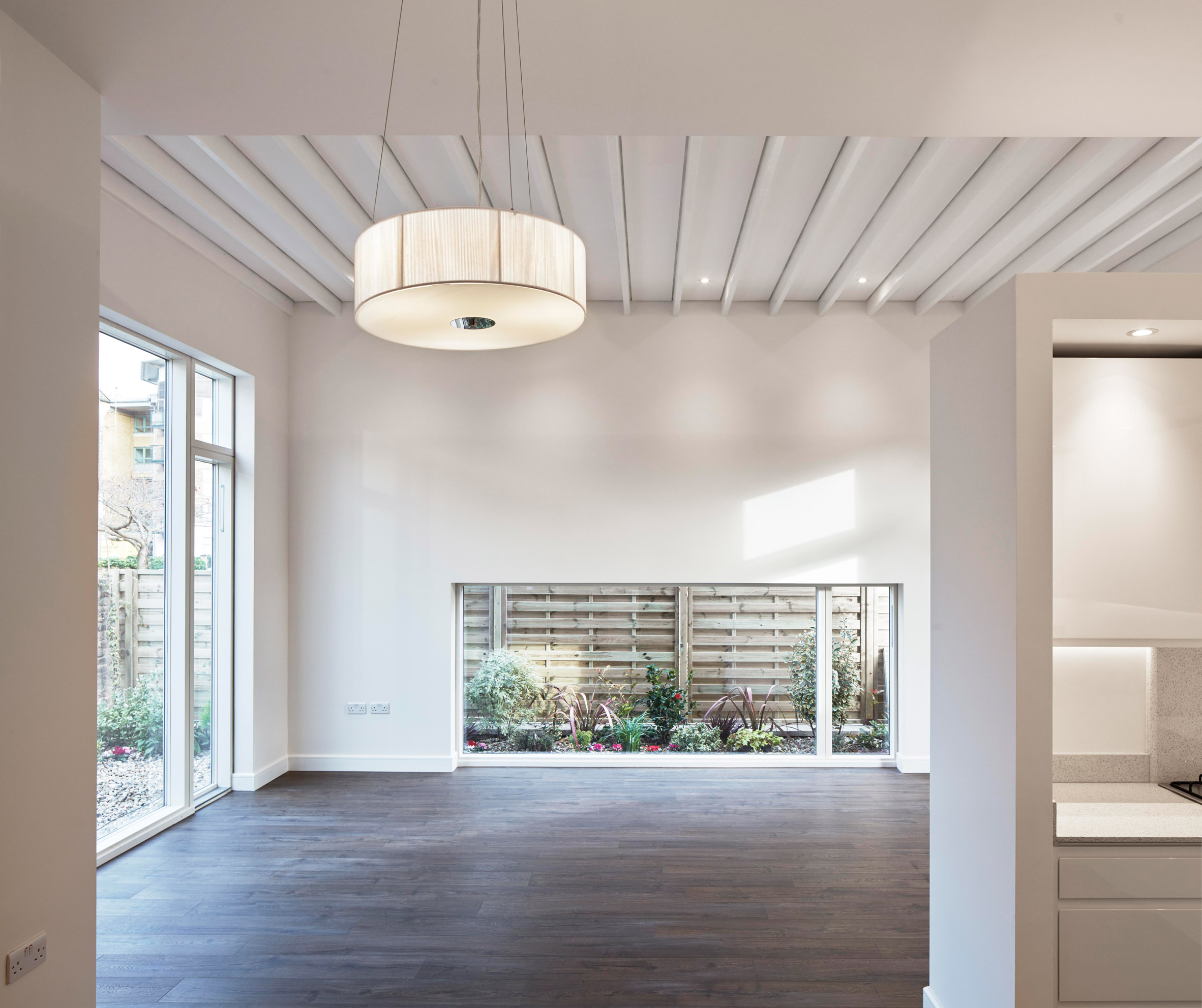 A single-storey volume extending from the gable end matches the heights of lean-tos at the rear of the perpendicular terrace, as well as aligning with the bay windows of its neighbours.

The structure’s lower height creates a stepped transition between the terrace and the garden, and its position on the end of the block further enhances the sense of the terrace terminating. 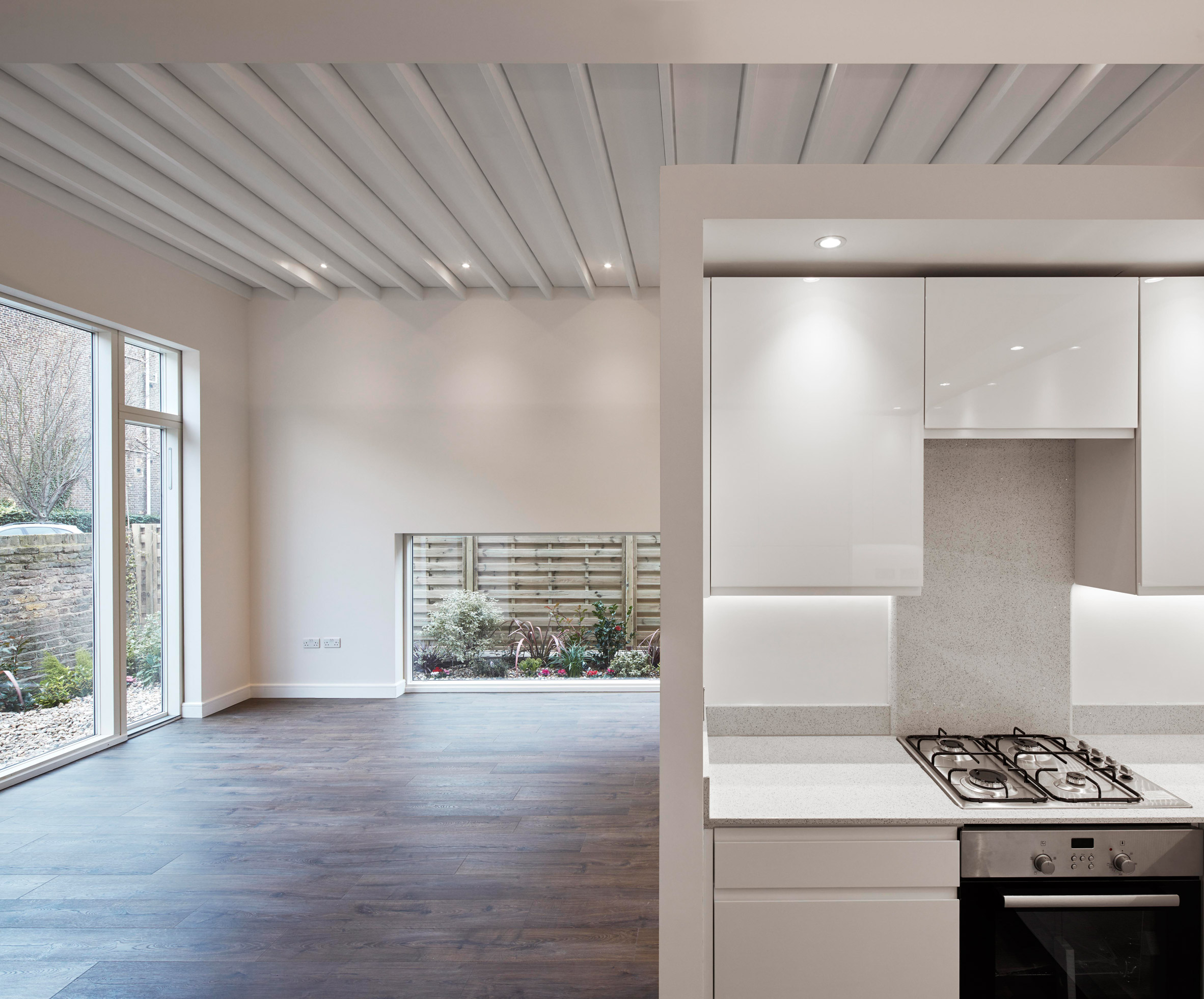 Every surface of the house is clad in a brick chosen to tie in with the traditional stock brick found on the surrounding buildings, without matching them exactly.

“The brick is the only facing material,” Madoc added, “so the three forms of the house – one curved, and two square – are conceived as being carved from a single piece.” 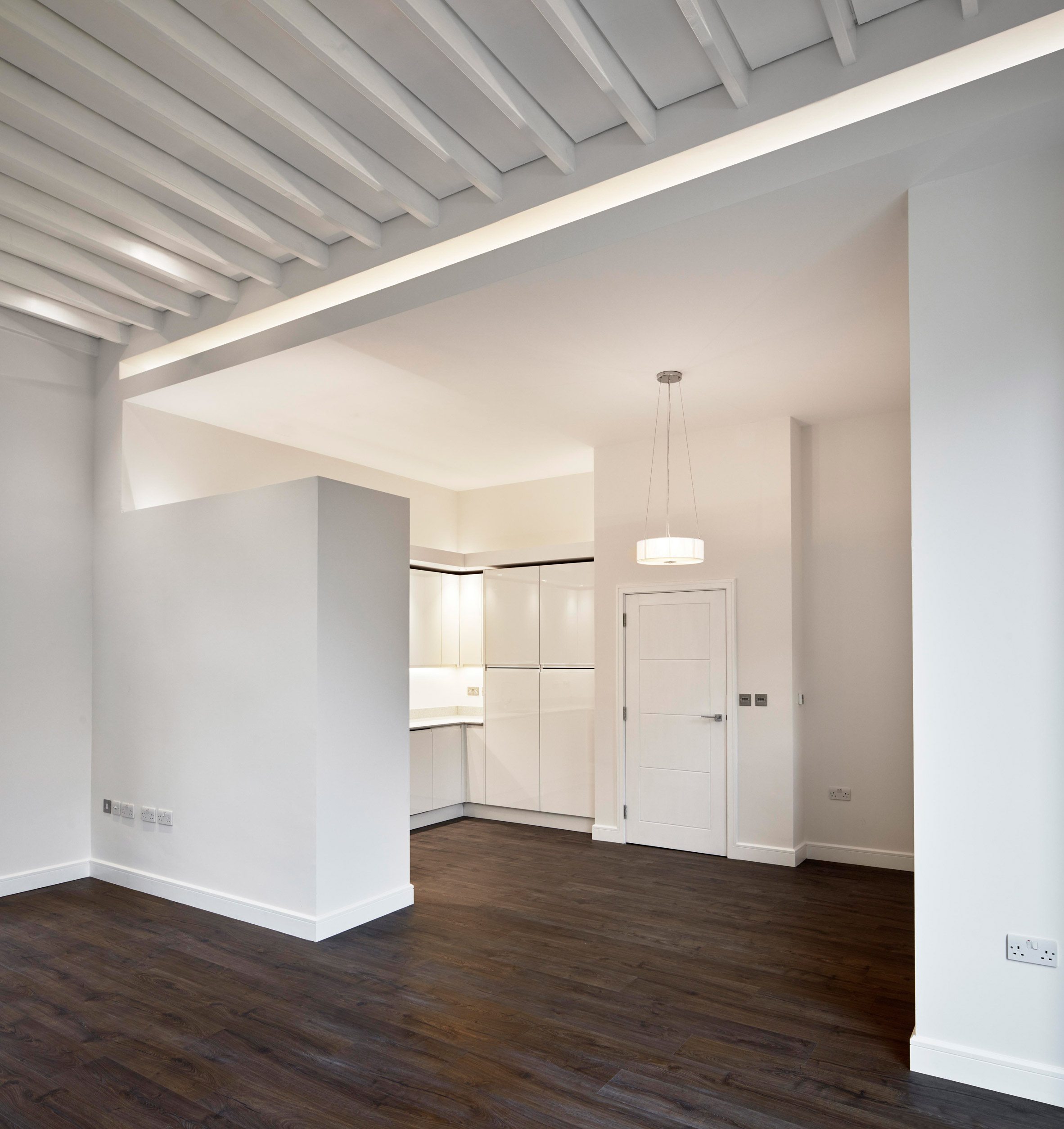 The masonry extends across the curved wall and the soffit above the main entrance, creating a sense of consistency that focuses attention on the surprising shapes.

Behind the rounded wall is a staircase connecting the building’s three storeys. The ground floor contains an open-plan living space, bedroom and toilet, with two further bedrooms and bathrooms accommodated on the levels above. 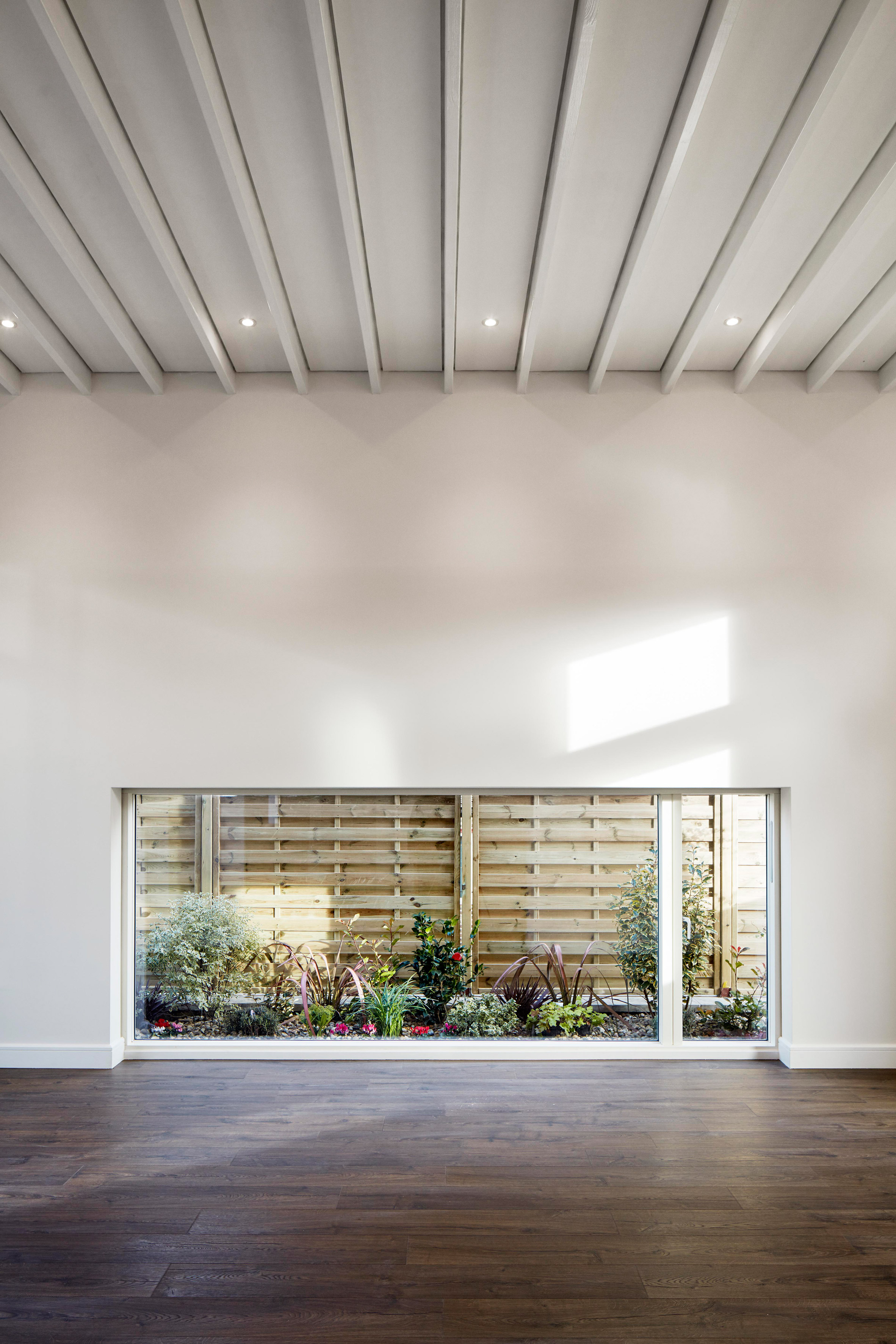 The living area features a high ceiling and openings on three sides that look out towards the surrounding gardens.

Photography is by Alan Williams.