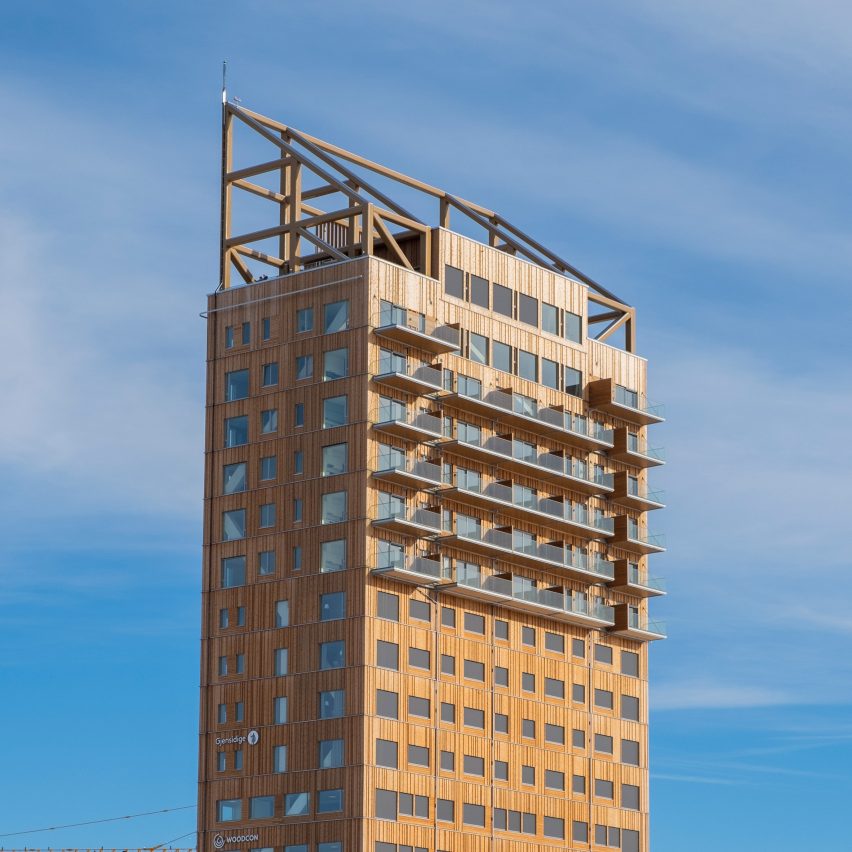 Mjøstårnet by Voll Arkitekter in Brumunddal, Norway, has been verified as the world’s tallest timber building by the Council on Tall Buildings and Urban Habitat.

It has taken the title of world’s tallest timber building from the 53-metre-high Brock Commons Tallwood House in Vancouver, which has a hybrid wood and concrete structure. Treet in Bergen, Norway, which is 49 metres high, used to be the tallest all timber building until Mjøstårnet completed in March 2019.

Mjøstårnet, the third-tallest building in the country, was designed by Norwegian practice Voll Arkitekter for AB Invest. The 18-storey mixed-use building contains apartments, the Wood Hotel, swimming pool, office space, and a restaurant

Timber specialist Moelven Limitre installed the building’s timber structure, including elevator shafts made entirely from CLT, and columns made from glued laminated timber (glulam). Glulam is made from wood that is planed then glued together to form columns or beams, and can be used in the place of concrete or steel elements.

Mjøstårnet was built four storeys at a time in five construction stages. An internal scaffolding and a large crane was used to hoist the pre-fabricated sections and floor slabs into place.

As Brumunddal is an area of Norway with a major forestry and wood processing industry the materials were sourced locally.

CLT and glulam are strong enough to support large loads, and using timber means the carbon absorbed from the atmosphere by the trees is locked into the structure permanently.

The Council on Tall Buildings and Urban Habitat (CTBUH) recently revised its guidelines to recognise timber as structural material in response to what it described as an “uptick” in the number of tall timber buildings around the world.

As urban areas grow denser than ever and the number of tall buildings being built globally continues to rise, many architects have turned to CLT and other engineered timbers as a more sustainable building material.

Penda has designed a concept for a residential tower and vertical farm hybrid, and Anders Berensson Architects has developed a proposal for a city of 31 wooden skyscrapers for Stockholm.

In the UK, architects  have called upon the government to make CLT exempt from the ban on combustable cladding materials. Not only is the material more environmentally friendly than steel, it also claims to be slow-burning and self-extinguishing without releasing toxic fumes.