Perforated metal surfaces form a white “veil” around the main hall of this chapel designed by Neri&Hu for a hotel complex near the Chinese city of Suzhou. 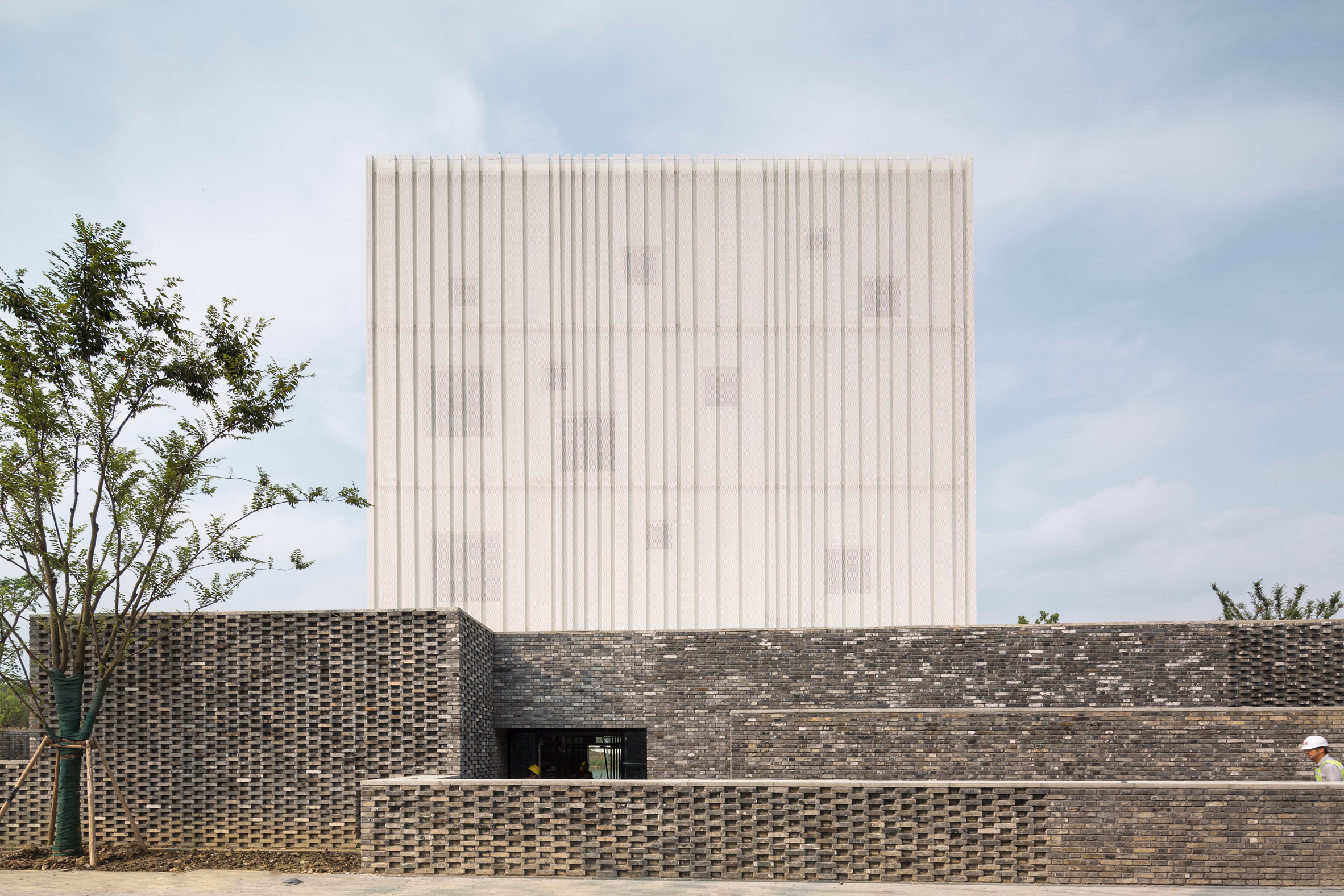 Lyndon Neri and Rosanna Hu’s Shanghai studio designed Suzhou Chapel for a site within the Sangha resort, which is described as “a life learning and wellness community on the shores of the beautiful Yangcheng Lake”.

Located around 15 kilometres from Suzhou and 70 kilometres from Shanghai, the resort comprises a hotel with spa, 87 serviced apartments, 109 serviced villas, a clinic, education complex, retail facilities, amphitheatre and conference space. 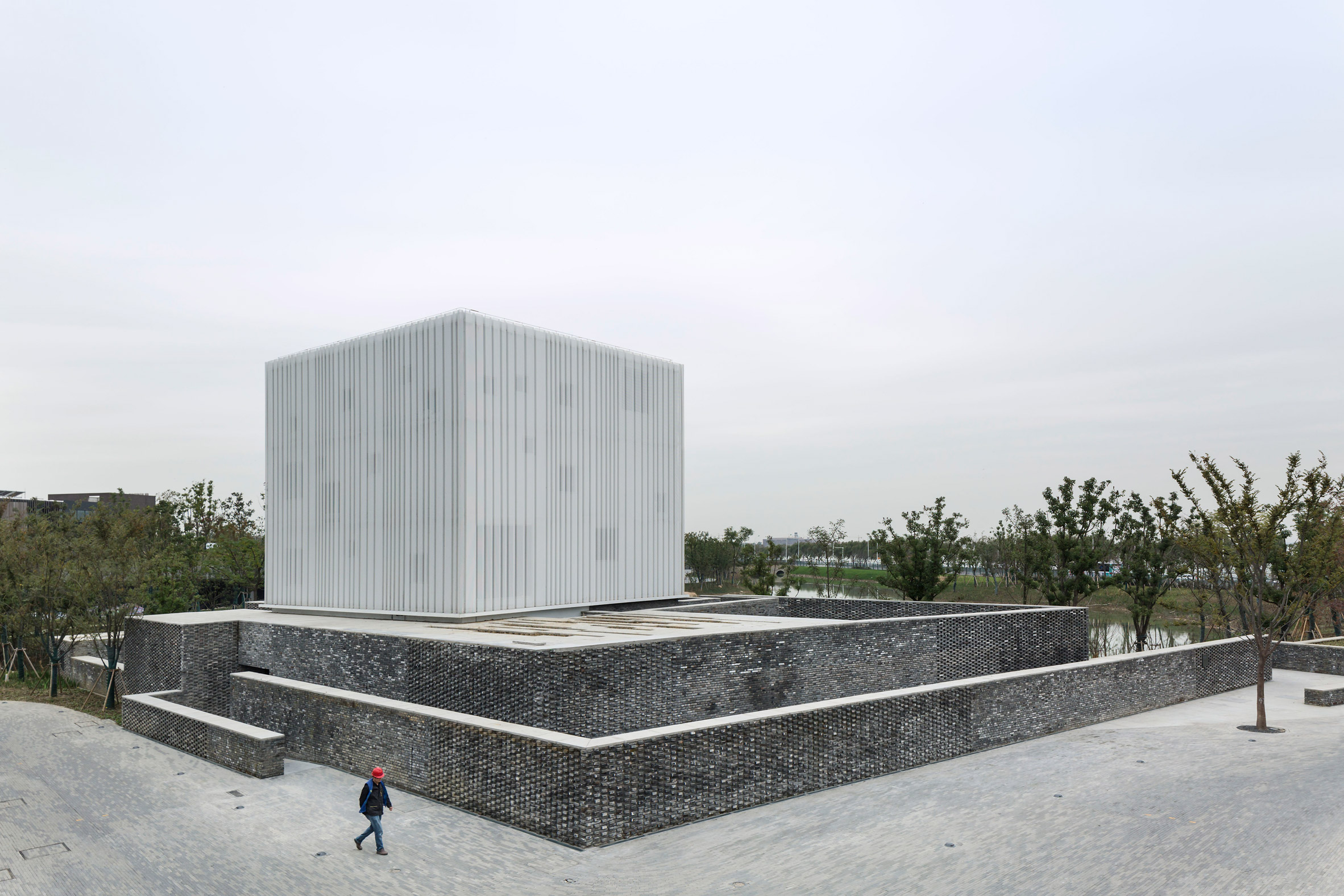 The chapel occupies a prominent plot by the waterfront that is visible from the main road. Its combination of brick walls and a floating white volume references other buildings found on the site, as well as the local vernacular of white rendered walls and black roofs.

The dark-grey brick walls surrounding the chapel are of varying heights and intersect with one another to create a non-linear route leading through the landscape and into the building. 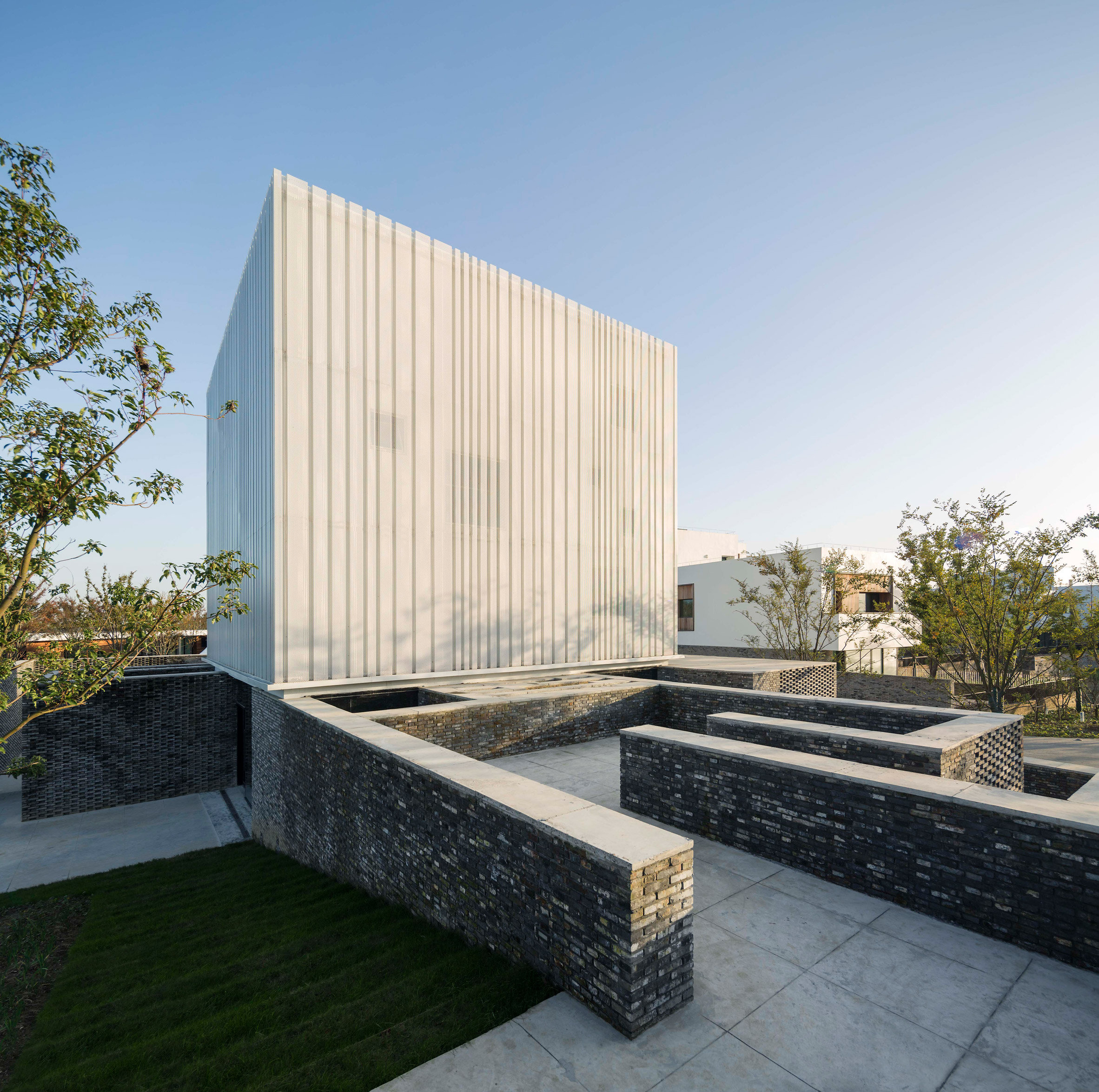 The reclaimed bricks are laid in varying patterns to create changing reliefs that break up the monolithic surfaces and add a textural detail to the surfaces.

Above the walls rises the white cube of the main hall, which comprises a white-plastered core interrupted by scattered square openings and surrounded by a perforated metal skin that alters in translucency depending on the viewing angle, light and weather conditions. 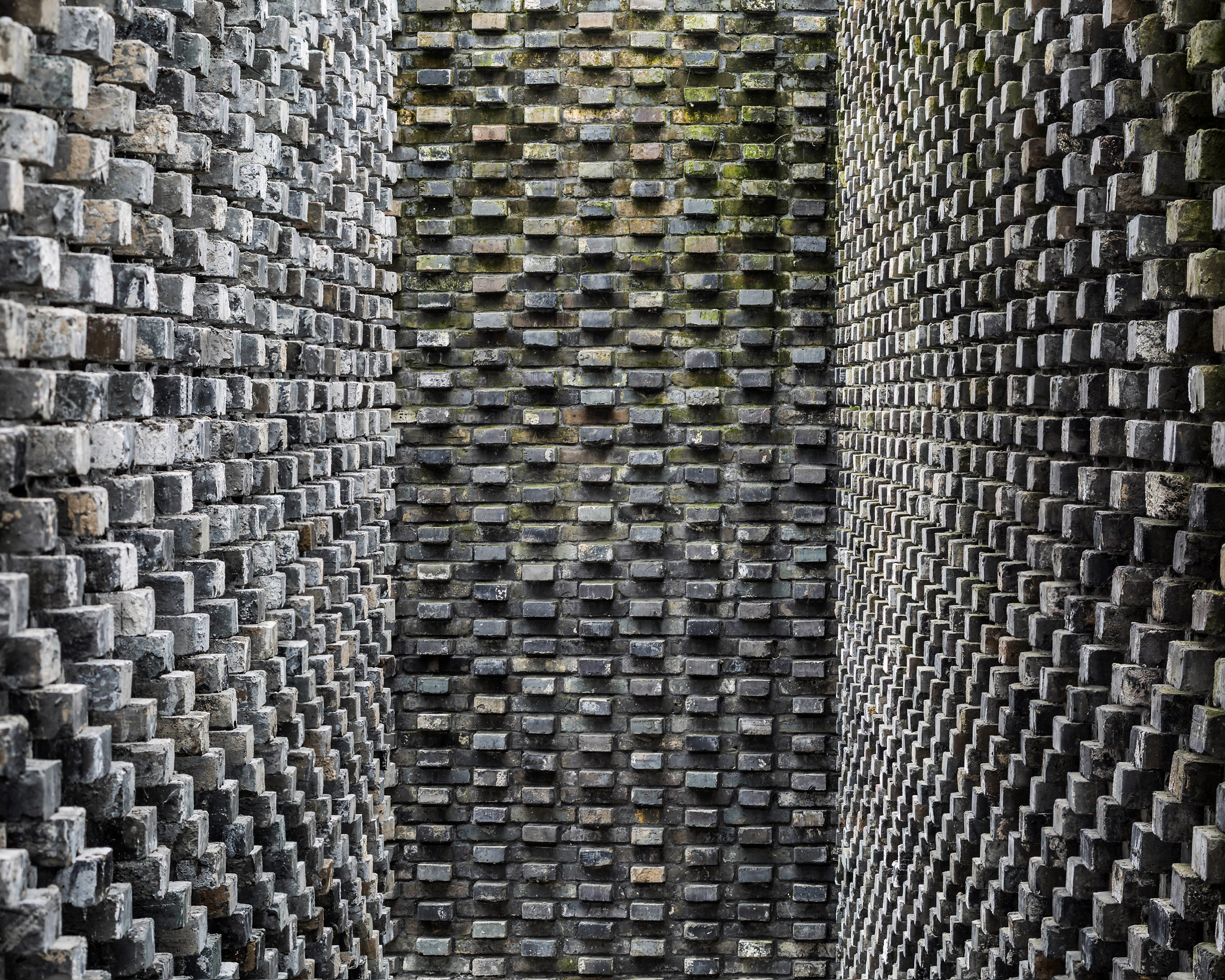 “In the daytime, the white box emerges shimmering gently in the sunlight, subtly exposing its contents,” said the studio.

“In the night, the white box becomes a jewel-like beacon in the project, its various windows emitting a soft glow in all directions.” 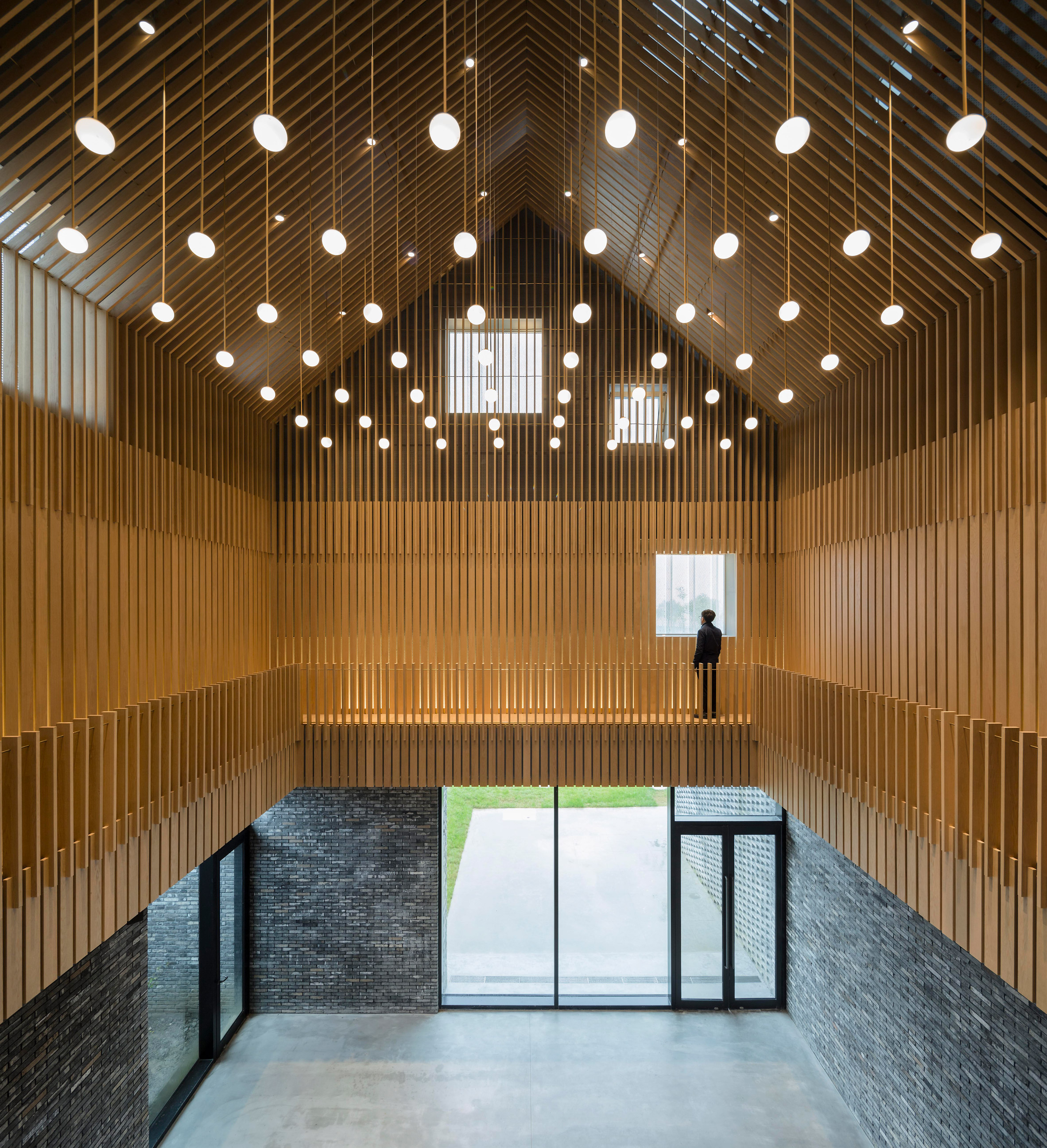 The box contains the main hall – a 12-metre-high room illuminated by natural light which floods in through the numerous square apertures and several sliding doors that lead to outdoor courtyards.

A mezzanine level for extra guests connects with a walkway that extends around the entire space. It is lined with wooden battens that reach upwards to form a vaulted ceiling, from which a warm lighting array emerges. 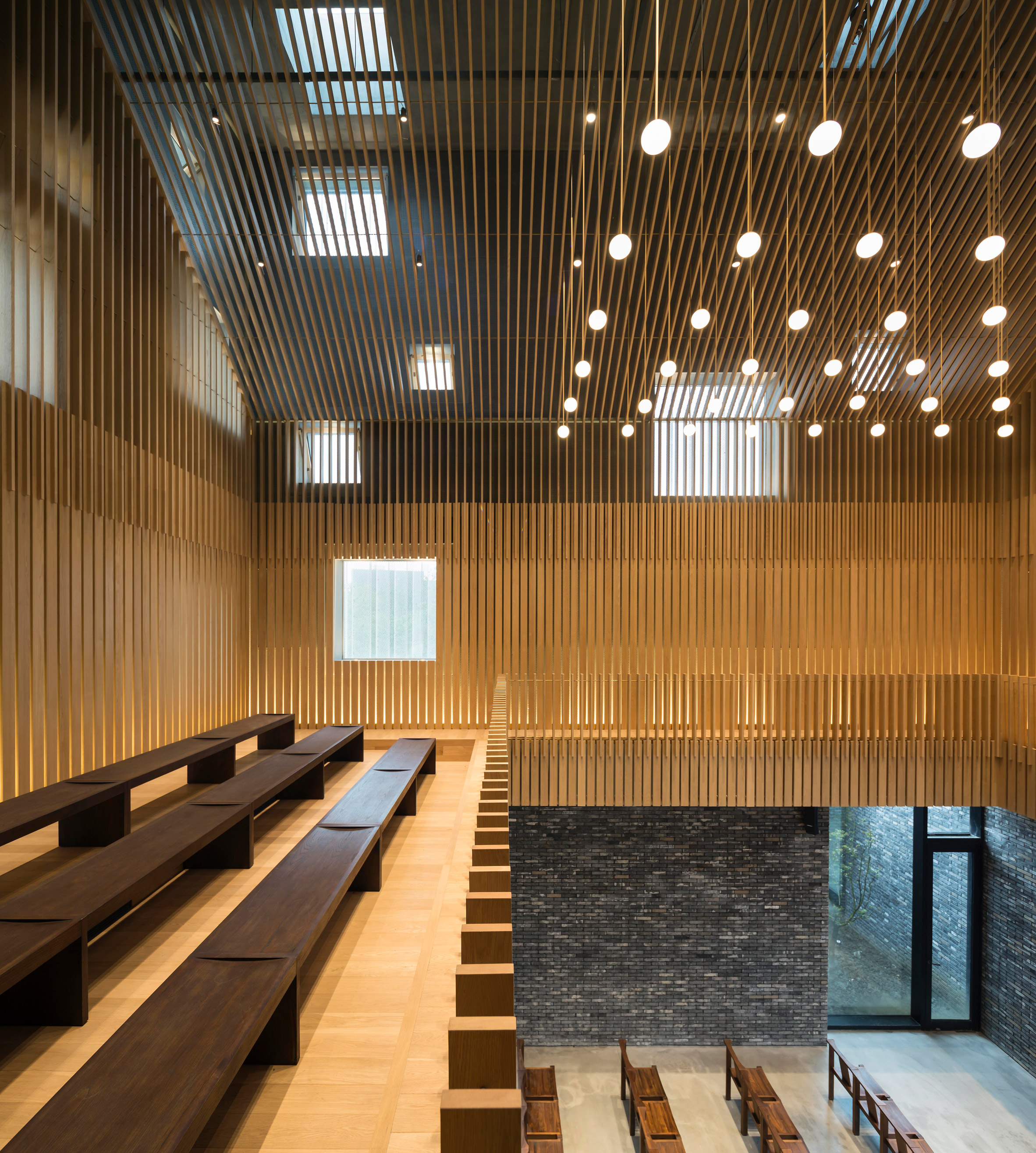 “A grid of glowing bulb lights and delicate bronze details give a touch of opulence to the otherwise quietly monastic spaces,” said the architects.

The mezzanine and a rooftop terrace with views of the lake are reached from a twisting staircase that ascends along one side of the main hall. 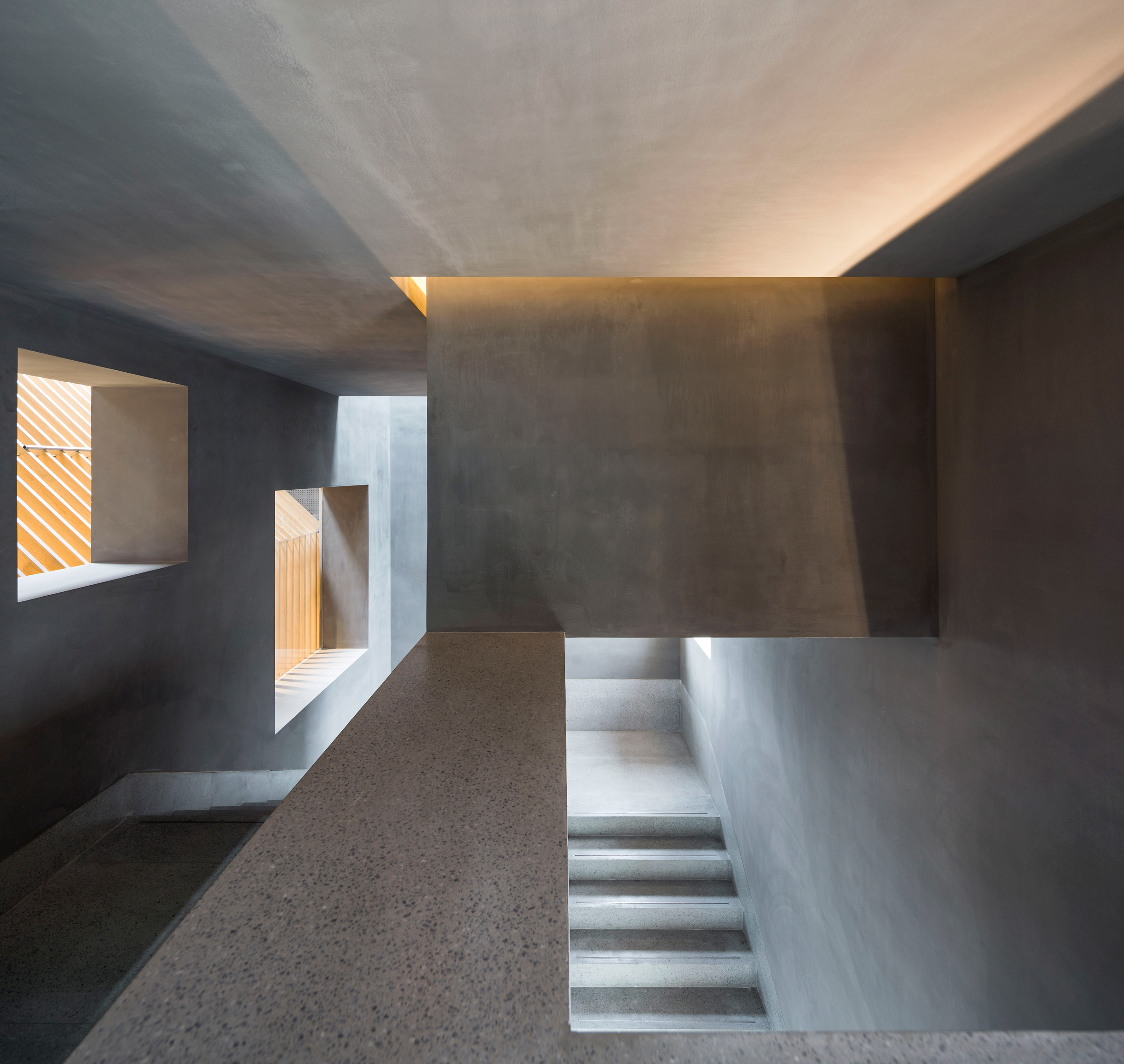 The staircase changes direction several times as it rises, and is interrupted by protruding geometric elements that break up the height of the stairwell.

Openings on either side provide guests with views of the surrounding scenery and the main hall as they ascend the stairs. 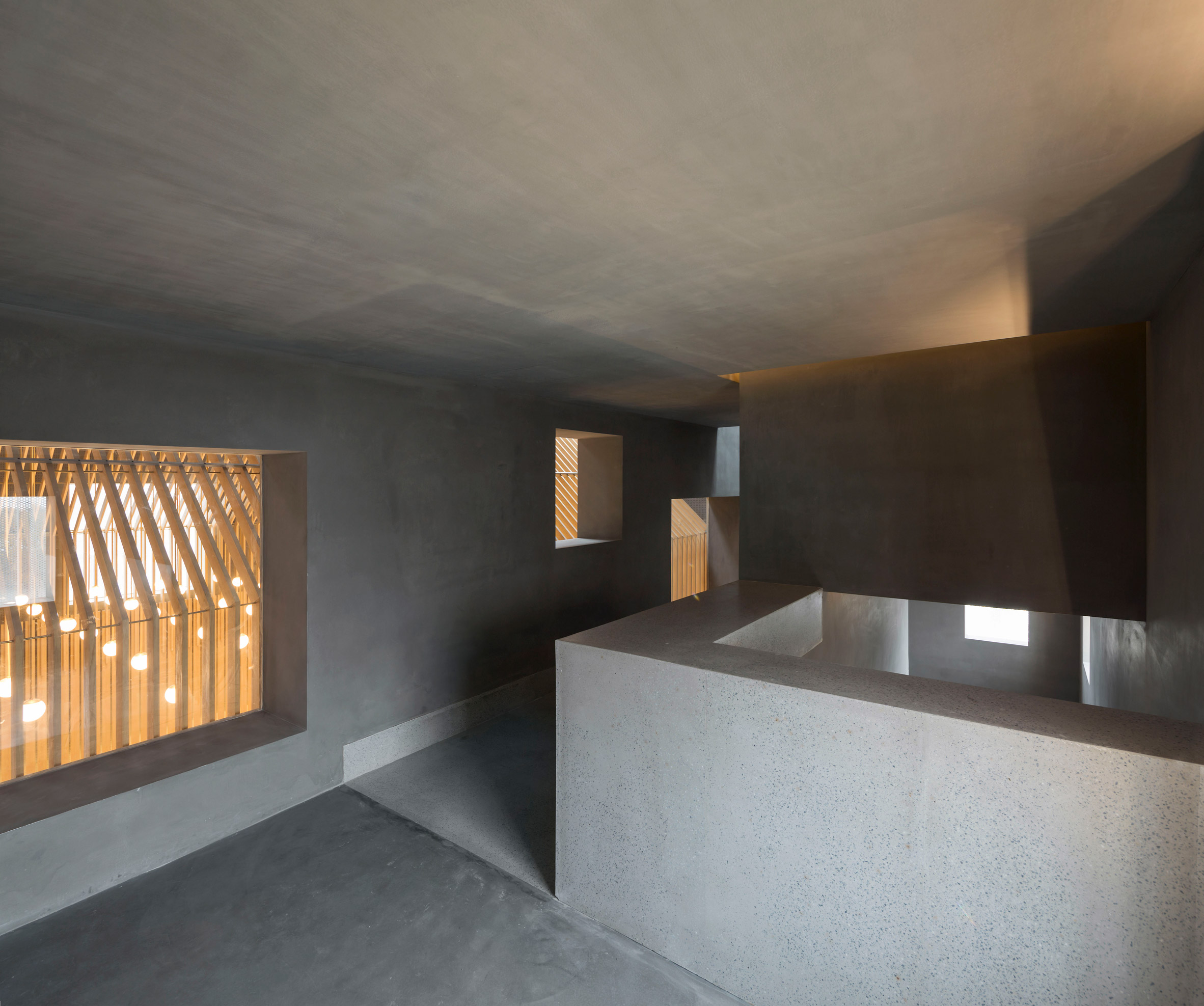 Concrete and terrazzo are the main materials used in the stairwell, with brick and wood introducing warmer and more textural details to the chapel’s central hall. 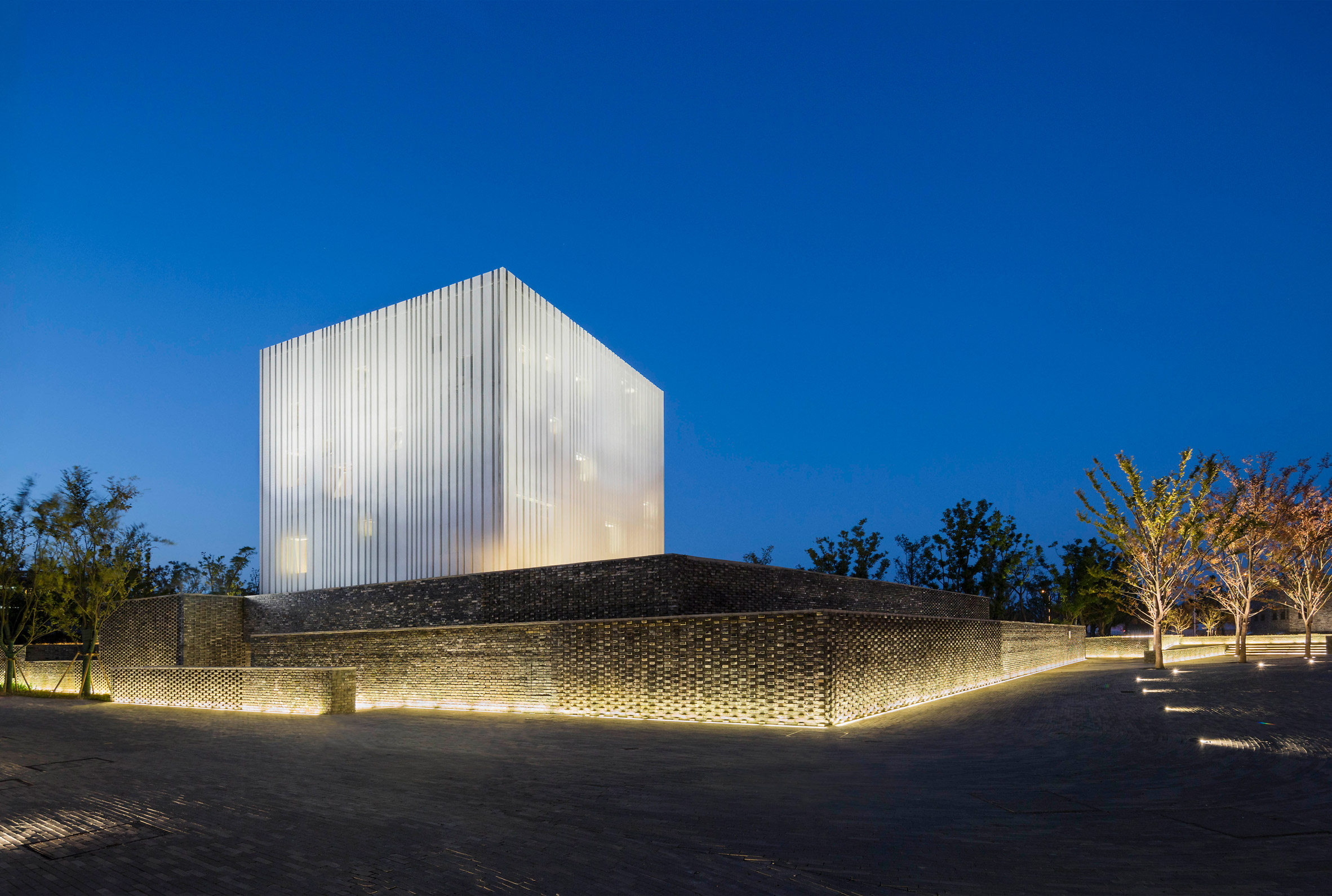 Neri&Hu recently completed the renovation of a 1930s theatre featuring dramatic stone and bronze details, and transformed a former missile factory in Beijing into a car repair garage and office with an industrial aesthetic. 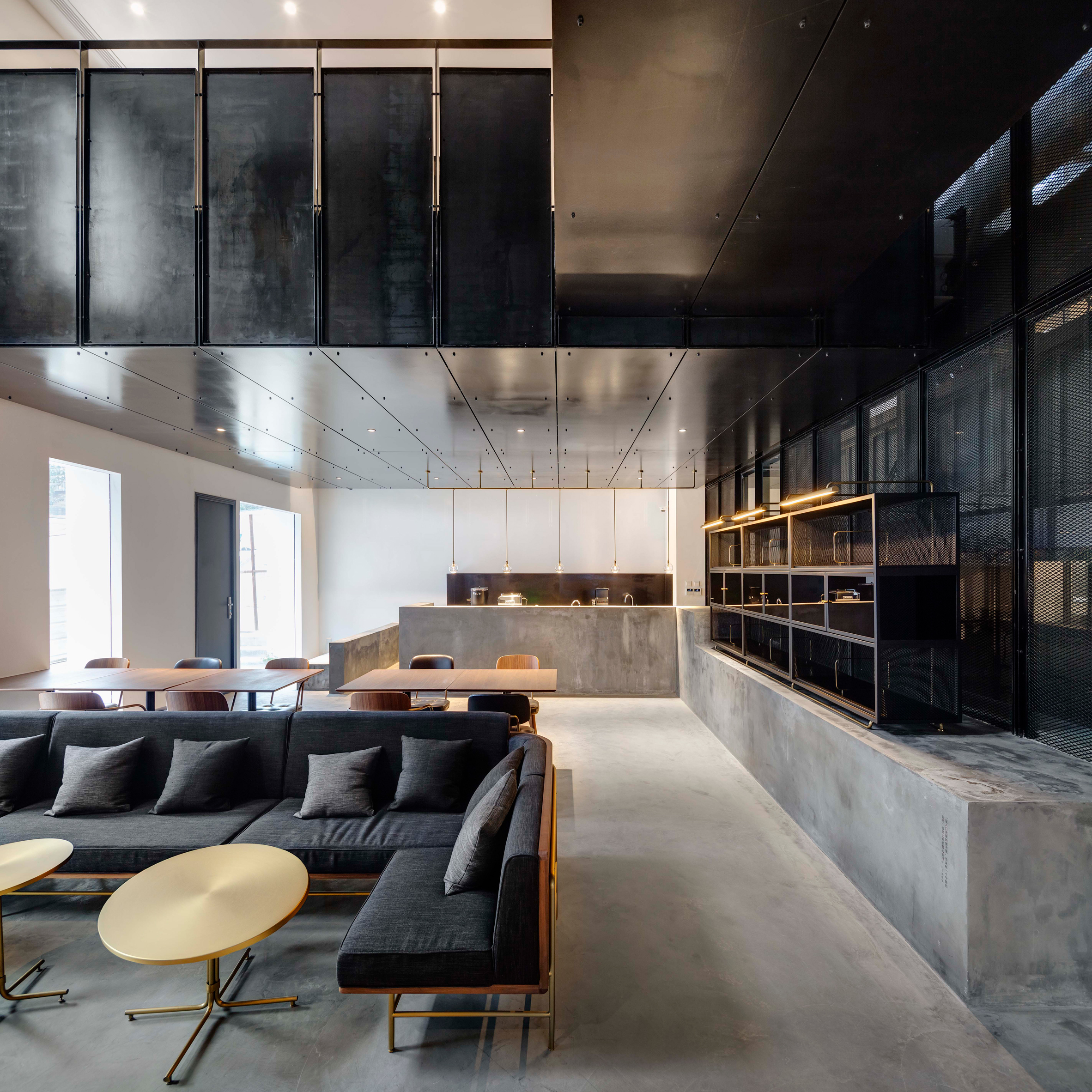