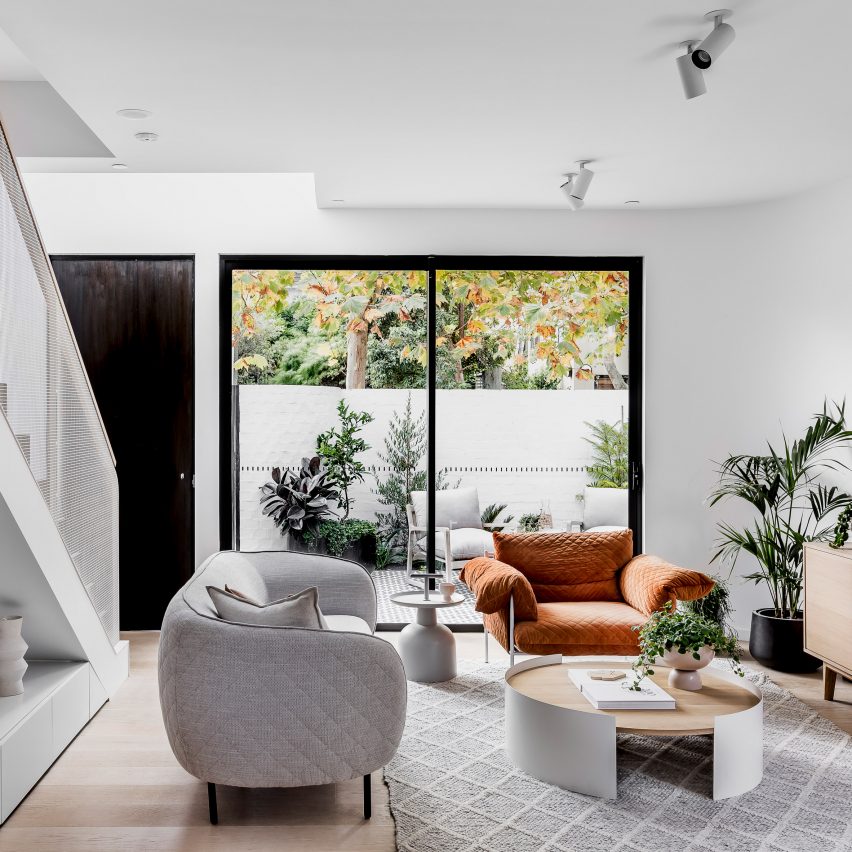 Cera Stribley Architects teamed with interior design studio The Stella Collective on a series of eight, three-storey townhouses in a Melbourne suburb that reflect the area’s art-deco architecture.

Called Pine Ave, the townhouses are located in the Melbourne suburb of Elwood and are the latest project by longstanding Melbourne developers, Angle and BuxtonGroup.

The area is known for its large period houses, many from the 1920s and -30s, as well as its proximity to the beach and foreshore. 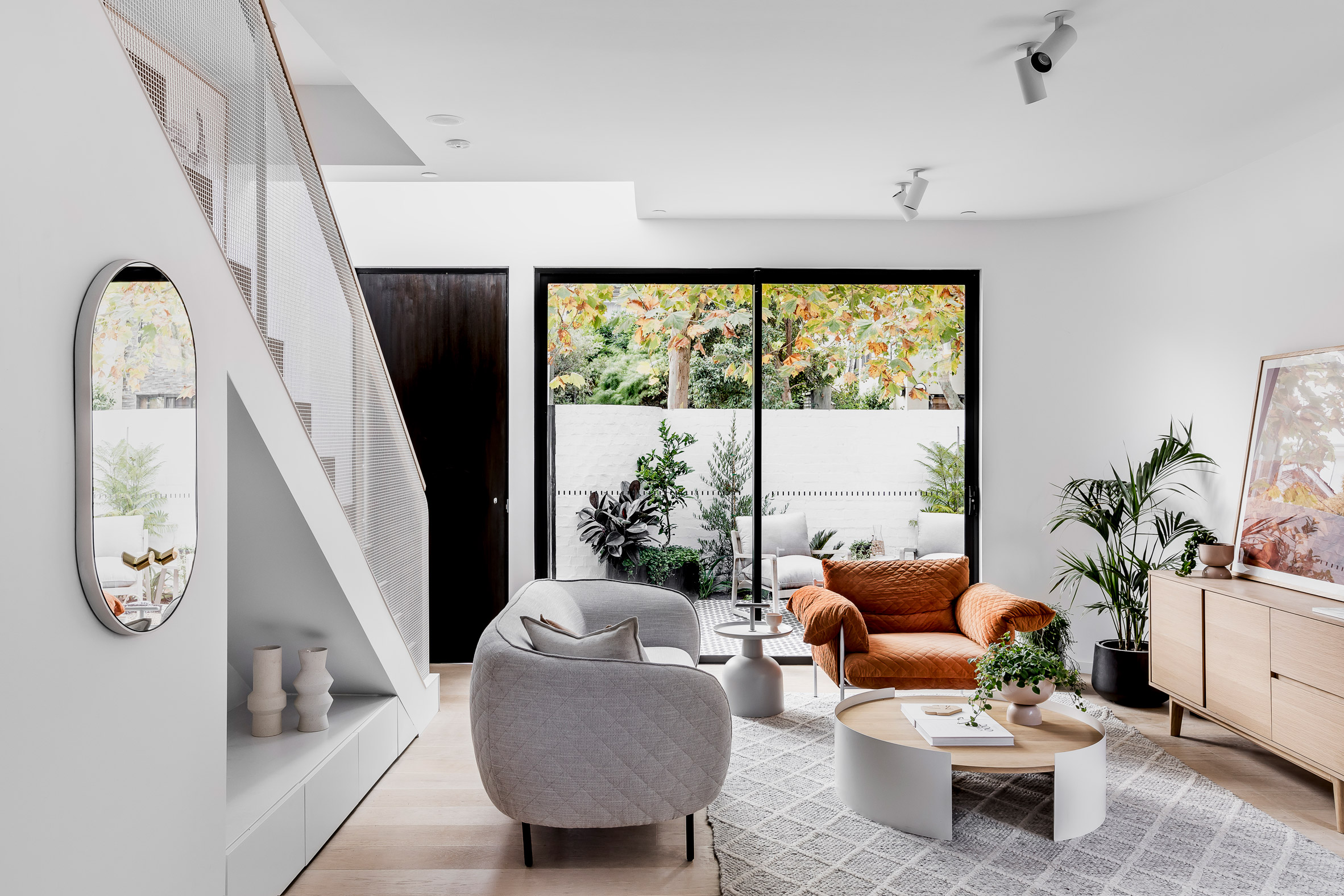 The developers enlisted the services of two Melbourne-based studios to work on the project. Cera Stribley Architects (CS-A) designed the buildings while The Stella Collective designed the interiors.

The development’s design is intended to combine the suburb’s beachside and art-deco elements. 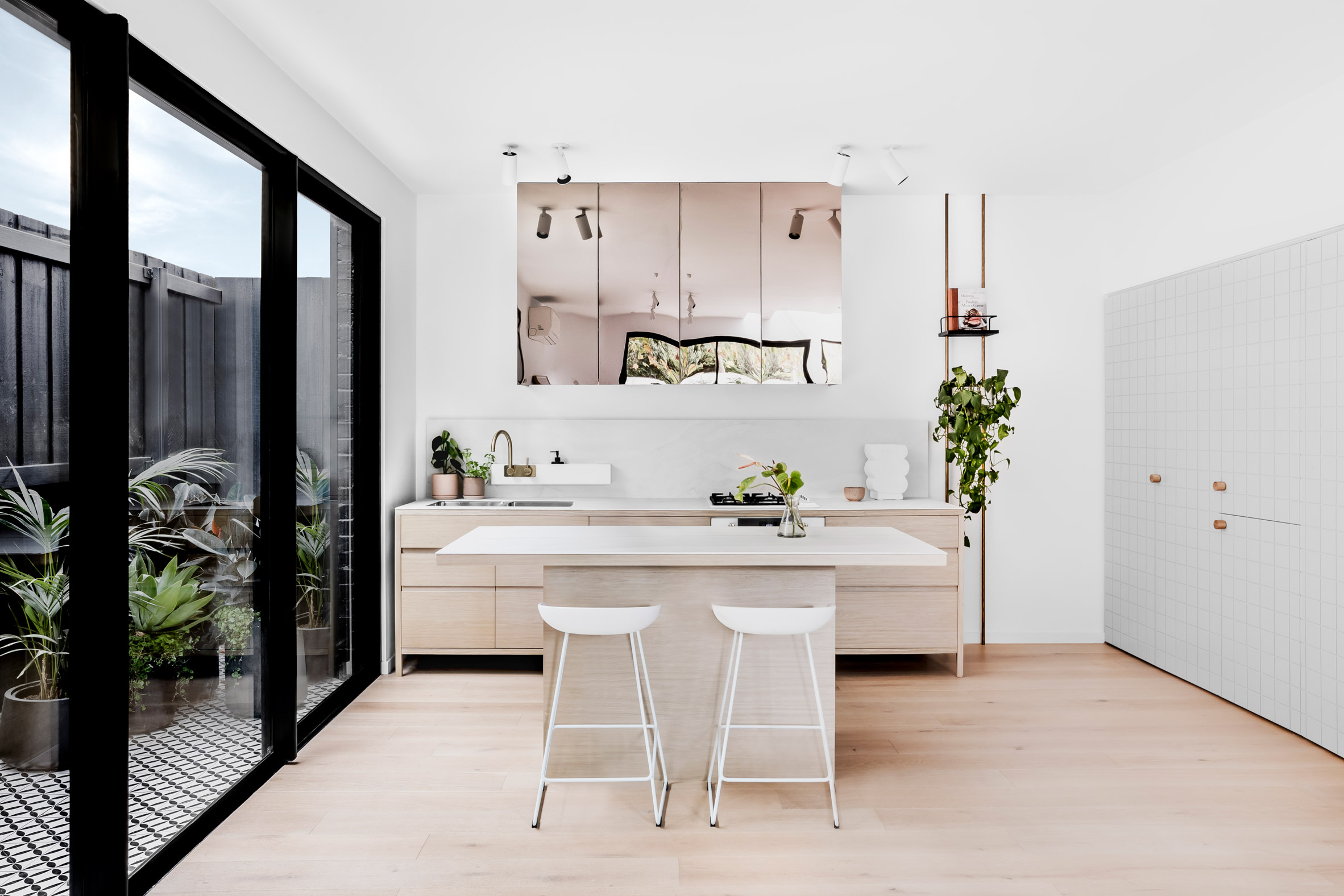 With curving white brickwork at each corner, the homes’ exteriors draw inspiration from the circular forms that were popular in the art-deco era.

Meanwhile, the materiality at the top of the facade is more industrial, featuring simple metal cladding in a charcoal finish that is intended to sit in the background to allow the curves to be the central focal point. 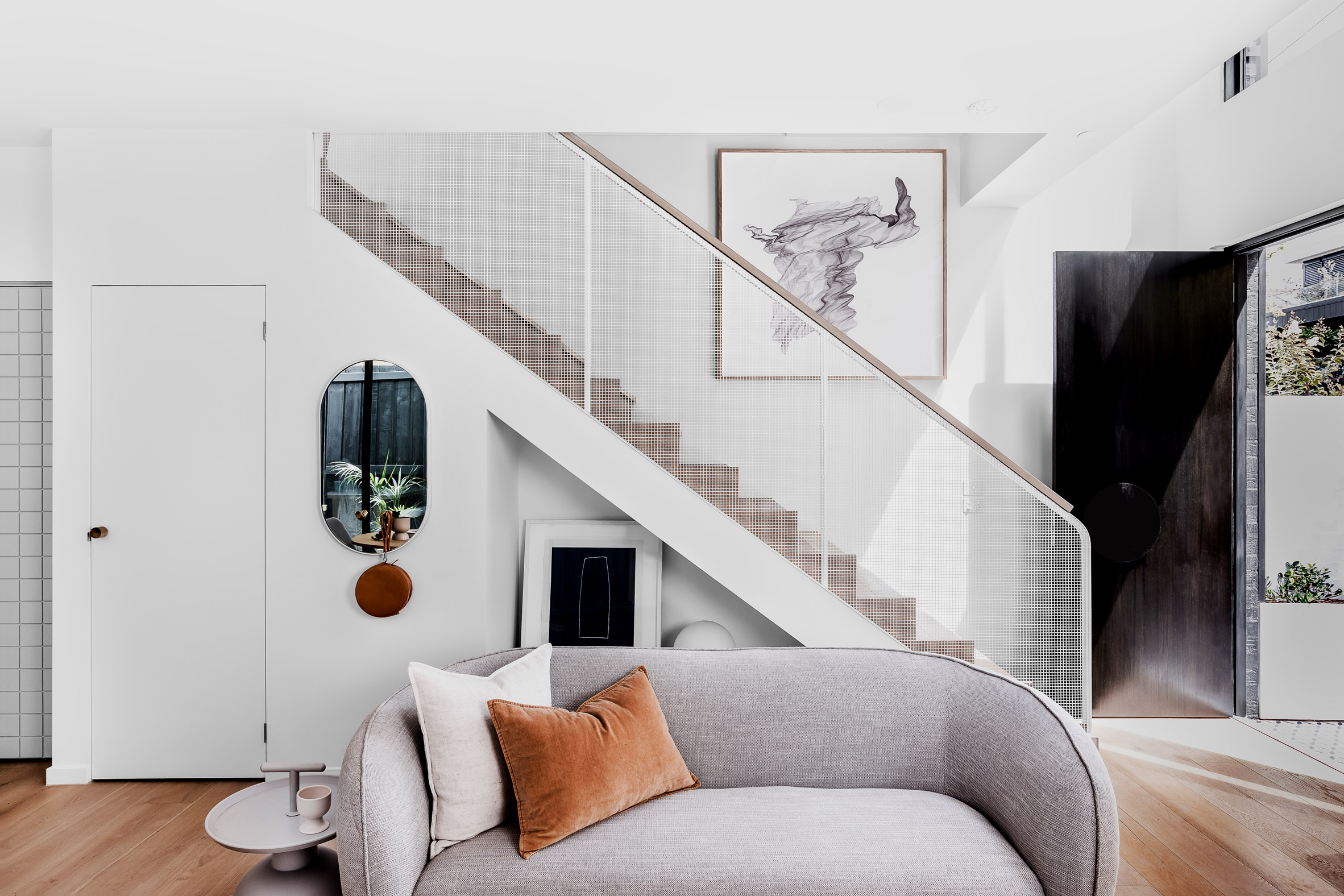 The curvature of each home highlights the entry point, while “softening” the process of walking inside. The building’s curved walls are echoed on the front fence, which also adopts the art-deco era’s white brickwork.

“Deliberately visualised to the nth degree, we have even included guidance tools such as custom mosaic numbers, created in collaboration with Brett Campbell, making each easier to identify,” said managing principal of Cera Stribley, Dom Cerantonio. “We felt that a sense of ownership was really important.” 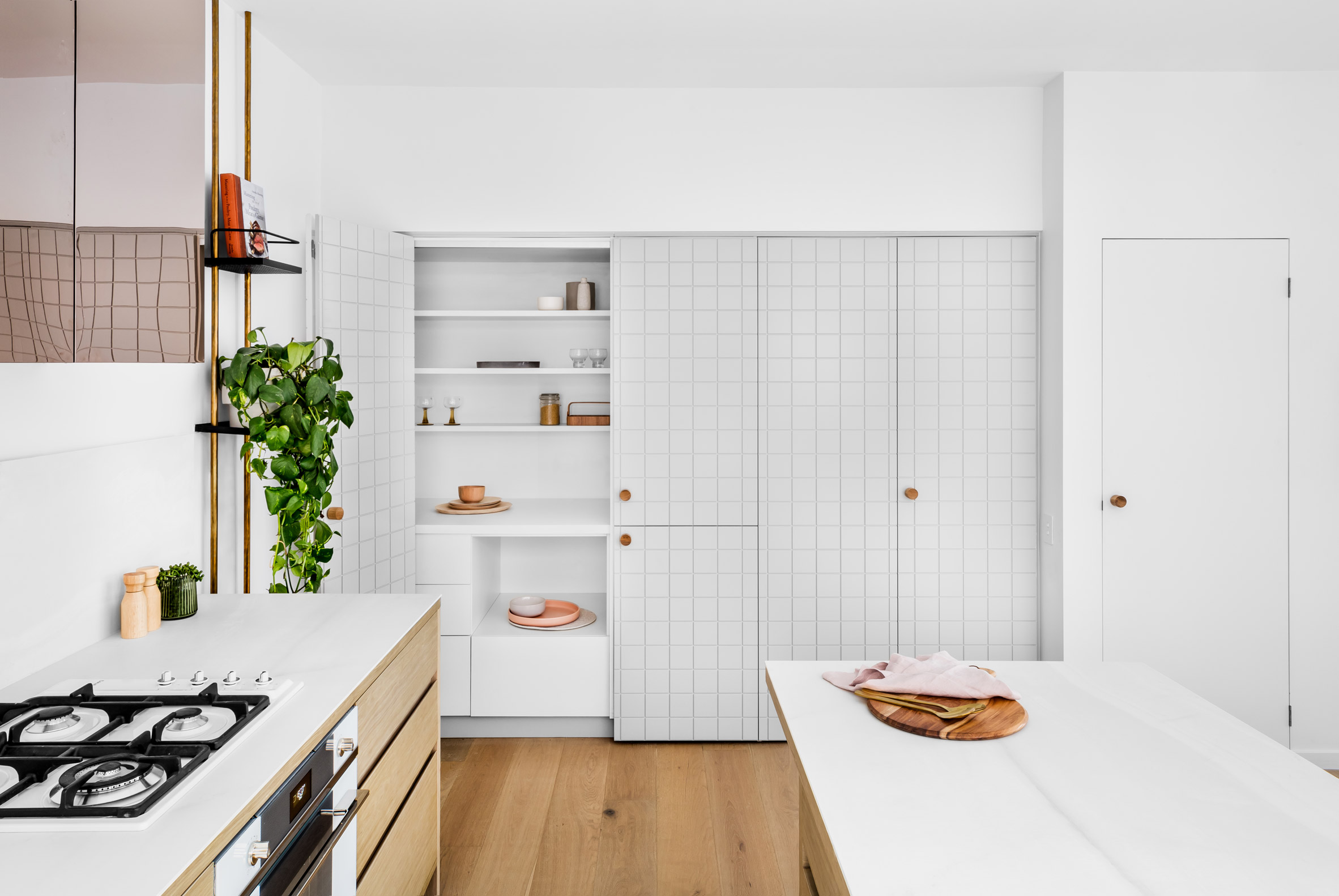 A significant recess is built at each entry point maximising the amount of light in this part of the home.

The void over the entry also offers a double-height space, which the architects said “injects a feeling of space and light from the top – something not often seen in townhomes”. 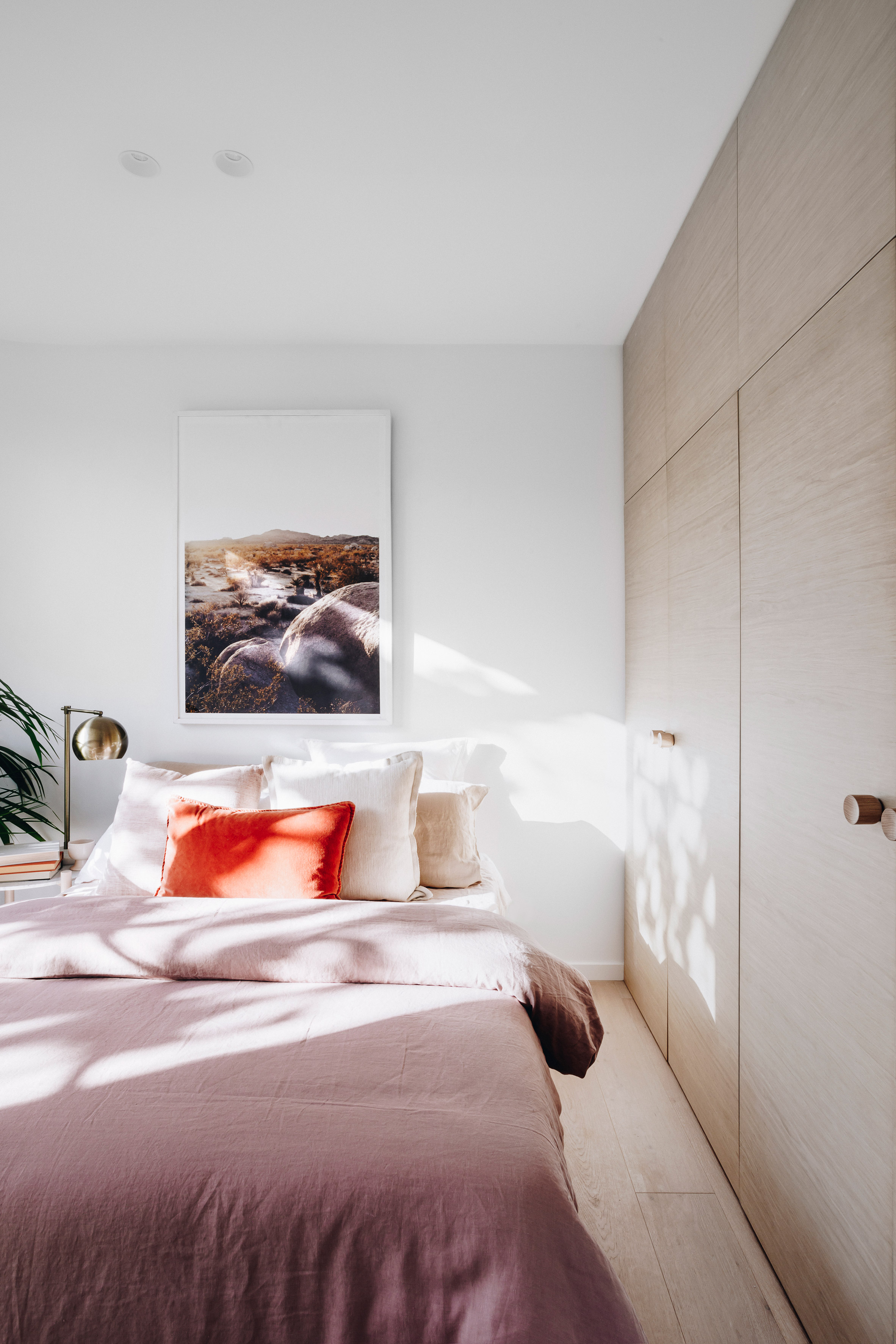 “Traditionally, townhomes back onto or face each other, resulting in one end with windows and the other a solid wall,” said Angle director Lachie Gibson. “However, from a functional perspective, we looked to create these homes with dual aspect allowing for cross-ventilation to provide incredible light and air flow.”

“Most of the homes are north-facing so they’re also going to be incredibly light and bright inside. This combination of fresh sea breeze and light brings a very organic energy to the space – exactly what you expect in a bayside home.” 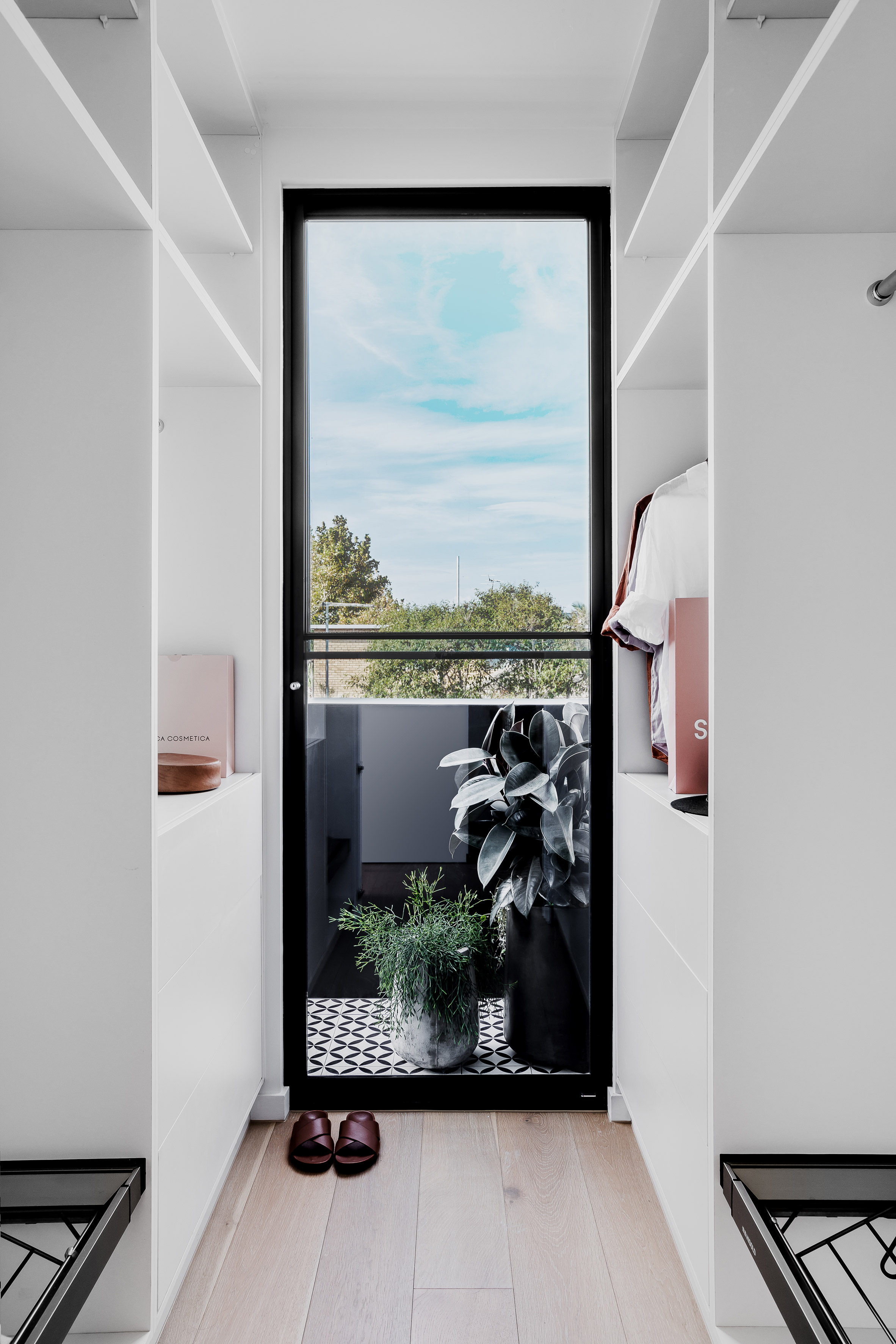 Inside, The Stella Collective said it wanted to create a space with “a sense of soulful living”, which it achieved by embracing the light with finishes that have aspects of reflectivity.

These include brass taps, cabinetry and range hoods in the kitchens, and white walls, white tiles and light grey terrazzo flooring in the bathrooms. 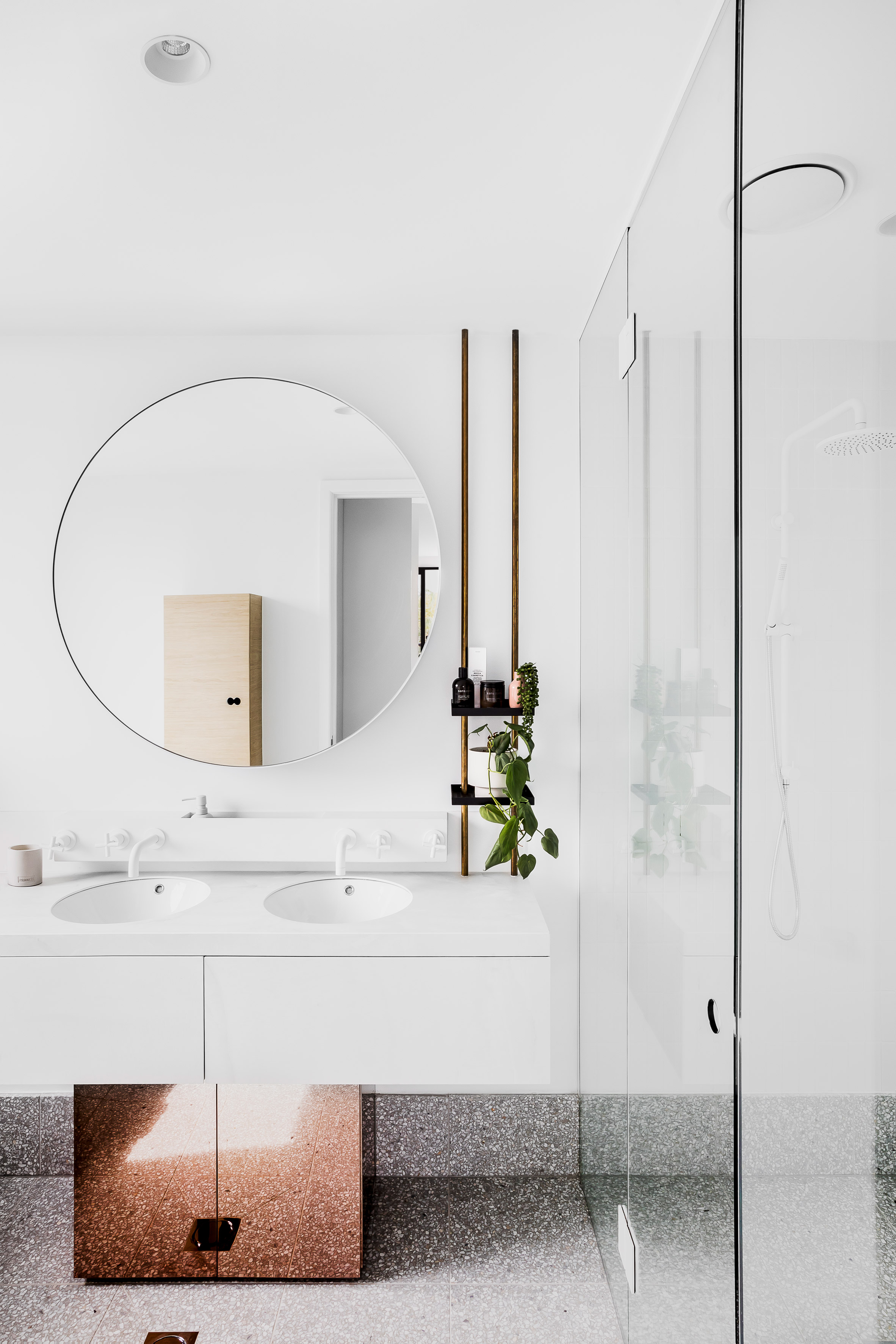 “We wanted to bring a very sexy feel to the home,” said Hana Hakim, founder of The Stella Collective. “It has that jet-set-like glamour with a bit of boho-chic, but done in a current way.”

The studio said it was careful to balance glamour with functionality ensuring that all space was used effectively. 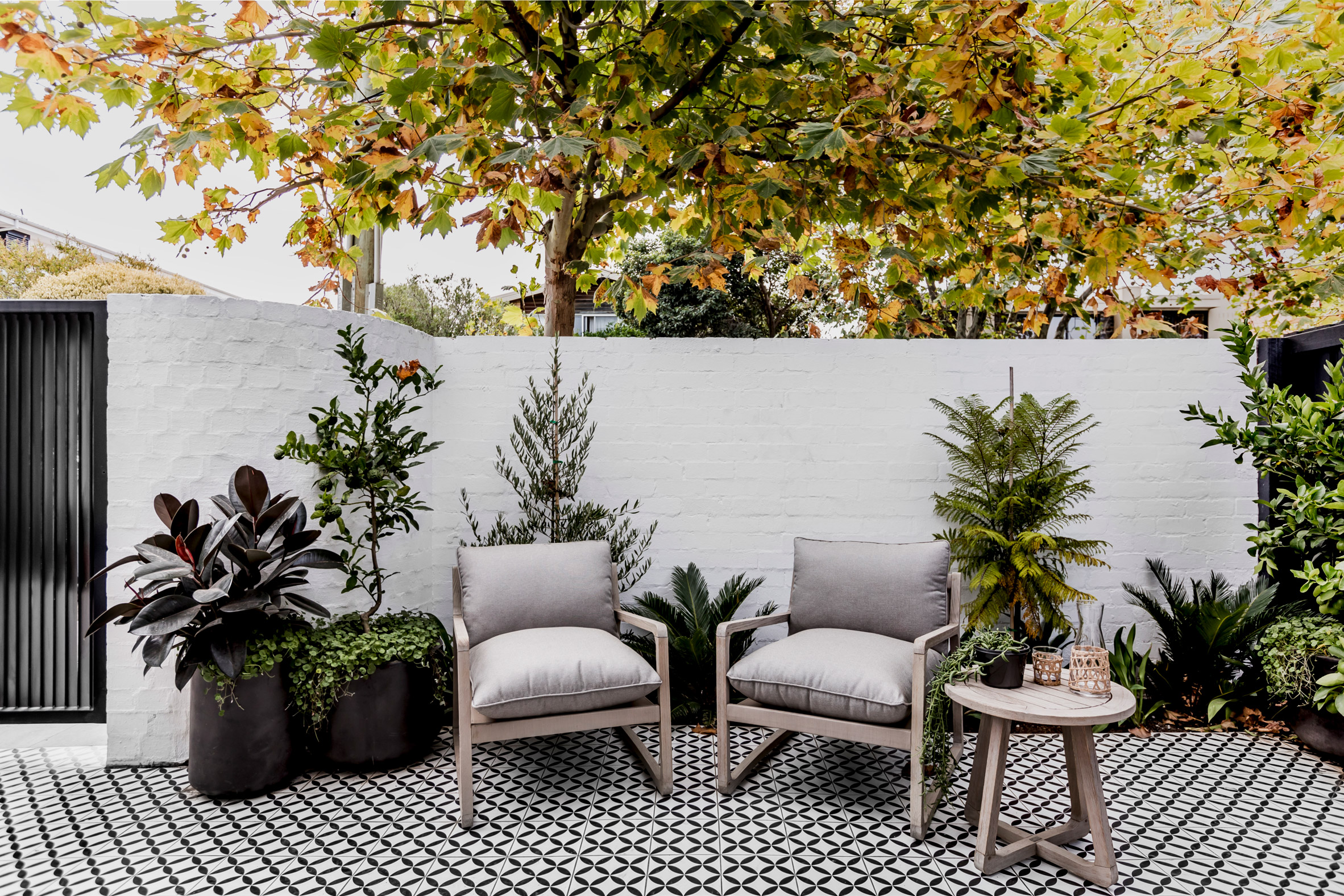 “We want homeowners to feel they are really in their homes and that they have space for everything they need,” continued Hakim. “The drawers are very roomy, and there is a fixed space between the tap and marble splash back to put hand soap, dishwashing liquid and so on. This is just another detail that elevates these homes.”

“We see both the kitchen and the bathroom as spaces to unwind so we wanted to avoid creating cramped spaces; they needed to be big and luxurious.” 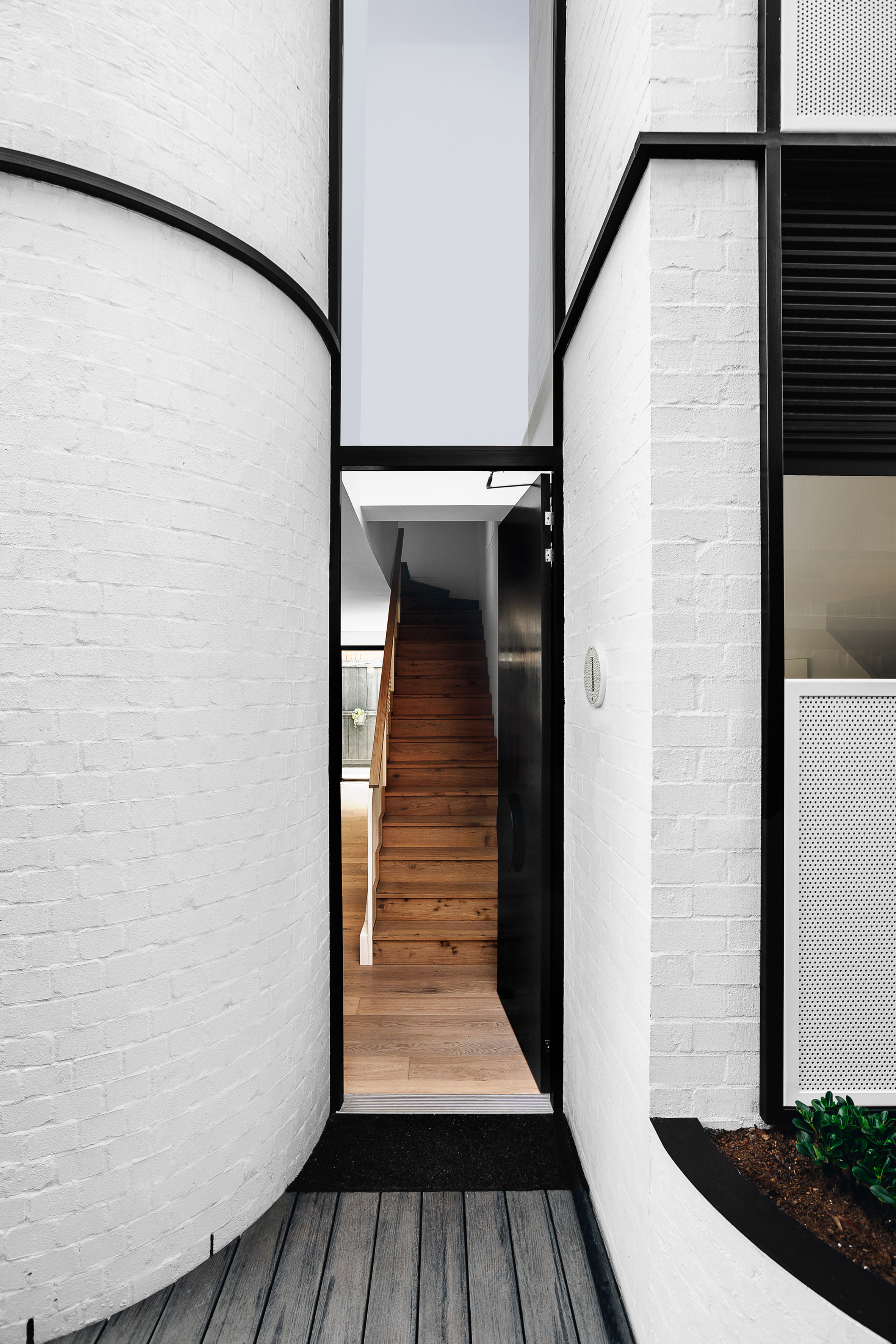 The exterior curves are continued inside through custom joinery such as a dining table with integrated storage, a feature mirror and chef’s caddy made with brass and black steel.

Other recently completed Melbourne residences include a Parisian-inspired apartment with a plant-filled lightwell at its centre, and a sweeping stone house overlooking the ocean designed by Woods Bagot.

Photography is by Maegan Brown.