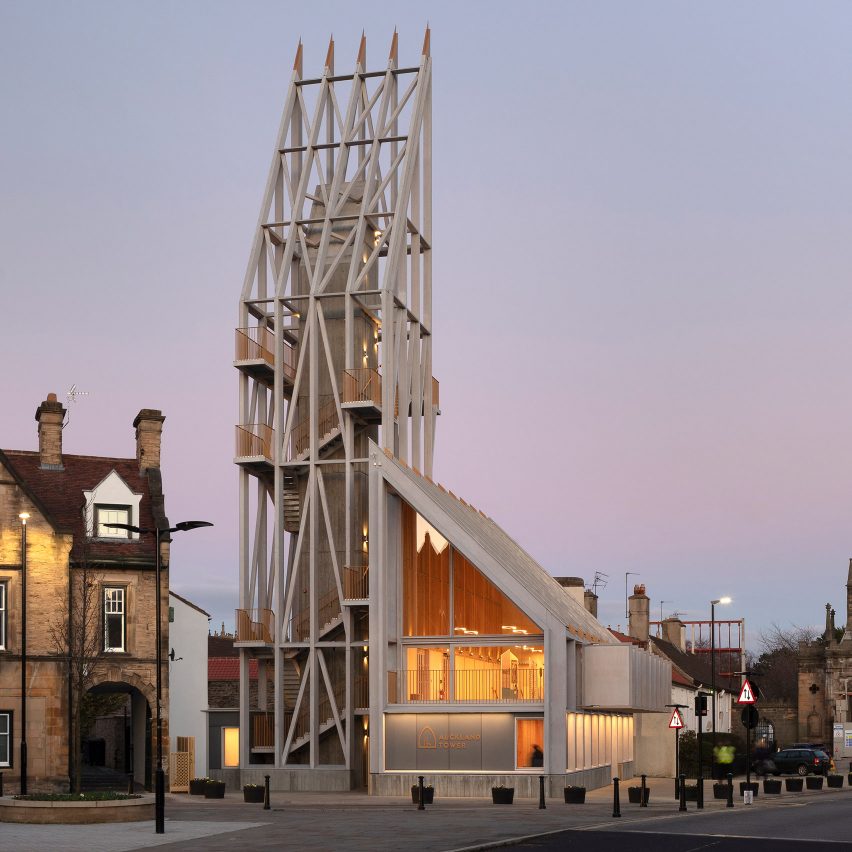 Siege engines and market halls informed the design of the Auckland Tower, a larch entrance building and viewpoint that Niall McLaughlin Architects has created for a castle in England.

The entrance marries a tall tower with a ticket hall and is the first port of call for visitors to Auckland Castle and its new Faith Museum in the town of Bishop Auckland.

Niall McLaughlin Architects decided to incorporate a lookout into the design as the castle did not previously have a tower, and the studio’s founder felt it deserved one.

Initially, the tower was designed in stone, but it was redeveloped with an open, wooden form, which is intended to mimic a medieval siege engine – a weapon used to destroy fortifications.

This was motivated by an illustration in a book on Medieval fortifications by Eugène Viollet-le-Duc – the architect who renovated Notre-Dame cathedral in Paris.

“We originally designed a stone tower for the castle, but Historic England objected to a tower,” Niall McLaughlin Architects explained.

“They did not like the idea of the castle overlooking the town. Niall felt that every castle should have a tower to climb up,” the studio told Dezeen.

“During the consultation, we changed our strategy by conceiving of the tower as an open timber structure, like a siege engine,” it continued.

“We showed them a wonderful drawing of a siege engine from Viollet-le-Duc’s book on Medieval fortifications. In this conception, the people of the town were climbing up to overlook the castle. It was a neat reversal of perception that gained general support.”

Auckland Castle is the historic home of the prince bishops of Durham and according to the studio, it is one of the best-preserved bishops’ palaces in Europe.

Today it has been refurbished as a faith, art and heritage space that is overseen by The Auckland Project – the charity that commissioned the entrance building.

The material is currently protected with “a grey surface treatment”, though this will fade over time to reveal the wood’s naturally weathered silver-grey finish.

Contrasting with the grey finish of the larch are luminous gold balconies and caps on the timber structure that protect the end-grains.

“We liked the interplay of the cool muted colour temperature of the weathered wood and the slight fizz of the gold,” the studio explained.

The small adjoining welcome building is designed to evoke a long market hall, which pays homage to the town’s nearby market place. It is raised slightly above ground level to provide a visual link to this market as well as the castle.

Inside, the hall contains a ticket desk, information point, shop and toilet, alongside space for events. Currently, there is an exhibition about the changing history of the castle.

Its walls are engraved with text telling the story of the castle, while the ceiling is lined with colourful panels, described by the studio as stencilled decorations.

These panels were designed by a curator from The Auckland Project and feature the heraldry associated with the bishops known to have once occupied the castle.

“Our intention is that the building is not simply a container for interpretation but participates in the representation of the site through its own features,” the studio added.

Niall McLaughlin Architects was founded by architect Niall McLaughlin in London in 1991. Other recent projects by the studio include the refurbishment of a 1970s building at Jesus College in Cambridge and a country house that combines a series of stone pavilions.

In 2016, it refurbished a prayer room at a historic church in Dublin by introducing walls and furniture made from solid ash wood inside the existing space.

Photography is by Nick Kane unless stated.