French firm Odile Guzy Architectes has completed a social housing project in the city of Chalon-sur-Saône, comprising a row of terraced houses and an adjacent apartment block with timber facades that extend to form slatted solar screens. 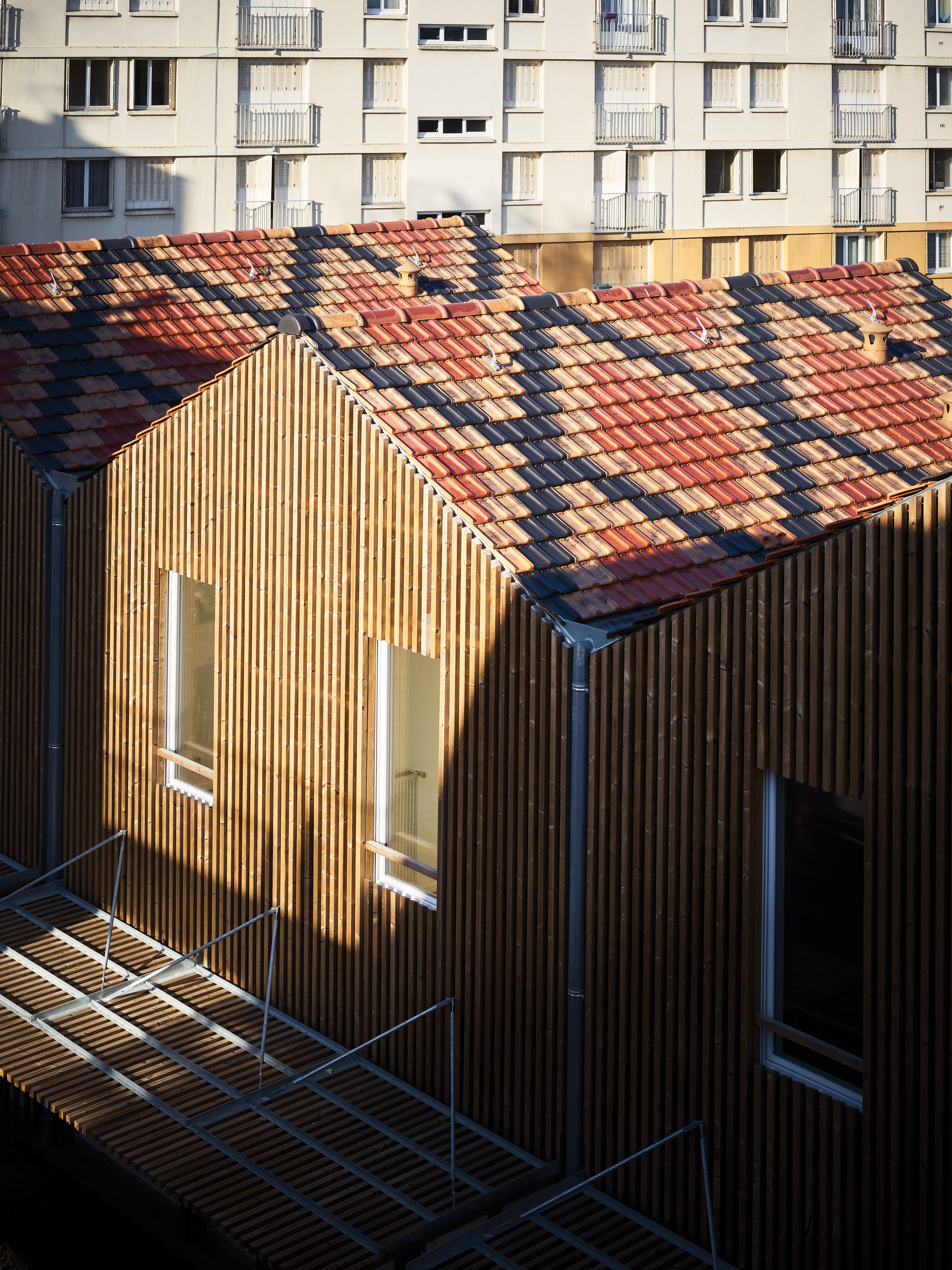 The project was undertaken by Odile Guzy Architectes for OPAC Saône & Loire, a social housing organisation that aims to provide high-quality, low-cost accommodation to people in the eastern French region.

The studio founded by Michael Guzy and Julien Odile based the design on the architectural typologies that are prevalent in the city’s suburbs, which include apartments, detached houses, town houses and low-rise social housing. 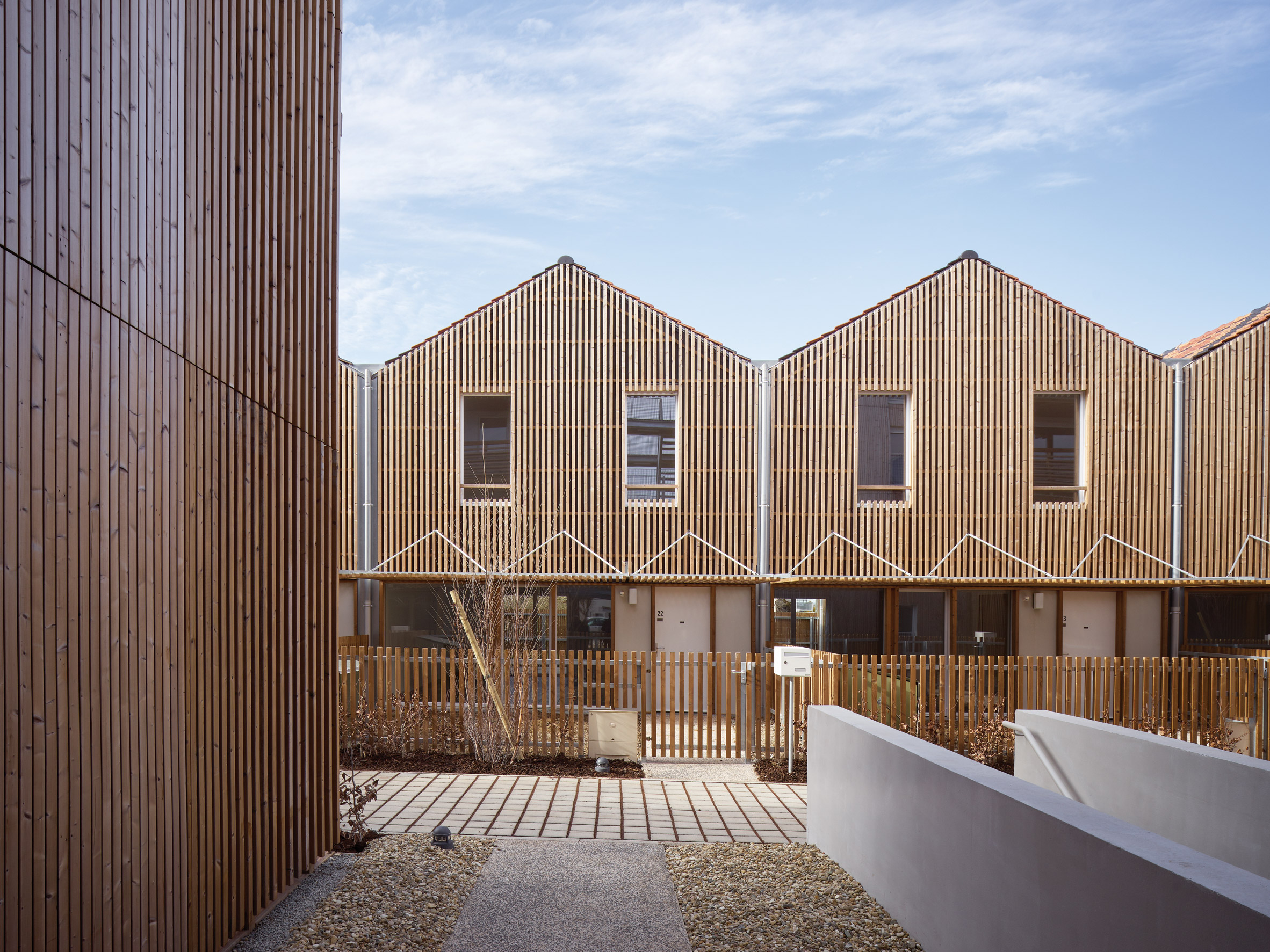 The project provides a total of 26 homes, divided into 20 apartments and a row of six terraced properties situated along either side of a landscaped central alley.

In response to the restricted dimensions of the site and the surrounding urban fabric, the architects proposed a plan for the development that provides variations in density and privacy as the buildings extend back from the street. 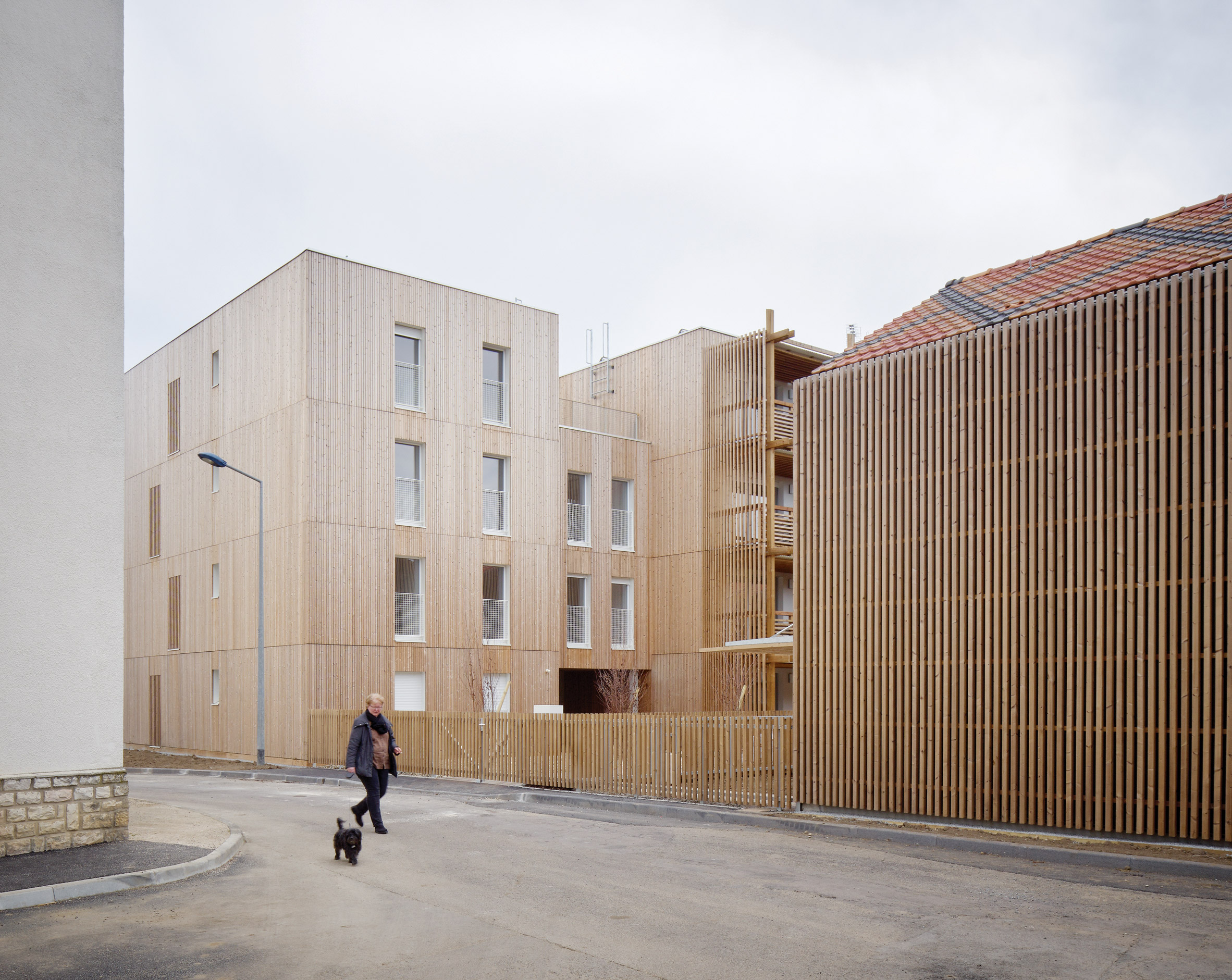 The entrance leads to a parking area squeezed in alongside existing garages, with the apartment block rising up to match the heights of neighbouring buildings.

Voids incorporated into the structure break up the overall mass, resulting in a more permeable and welcoming transition from the car park to the central alley, which can be glimpsed from the street. 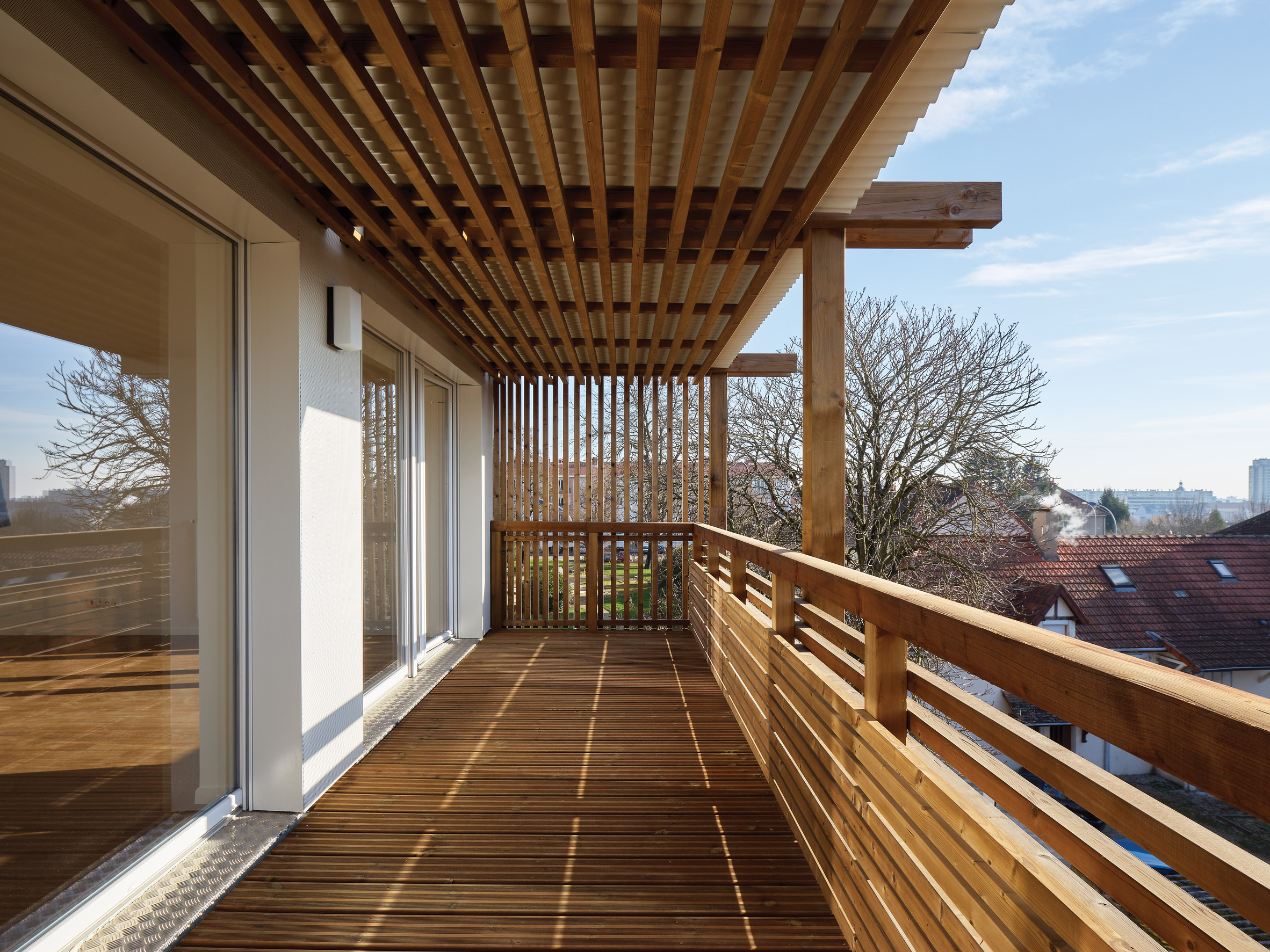 “The voids help create a sequence of different experiences as you move through the site,” said the studio. “This ‘mise en scene’ is prolonged through the use of footbridges and external staircases offering distant views and remarkable frames towards the city.”

The paved central alley connecting the two parts of the project creates another open area or void that performs an important social function and enables planting to be incorporated into the project.

The gravelled area in front of the apartments accommodates a line of slender birch trees, while a hedge will quickly grow to provide privacy for the row of houses. 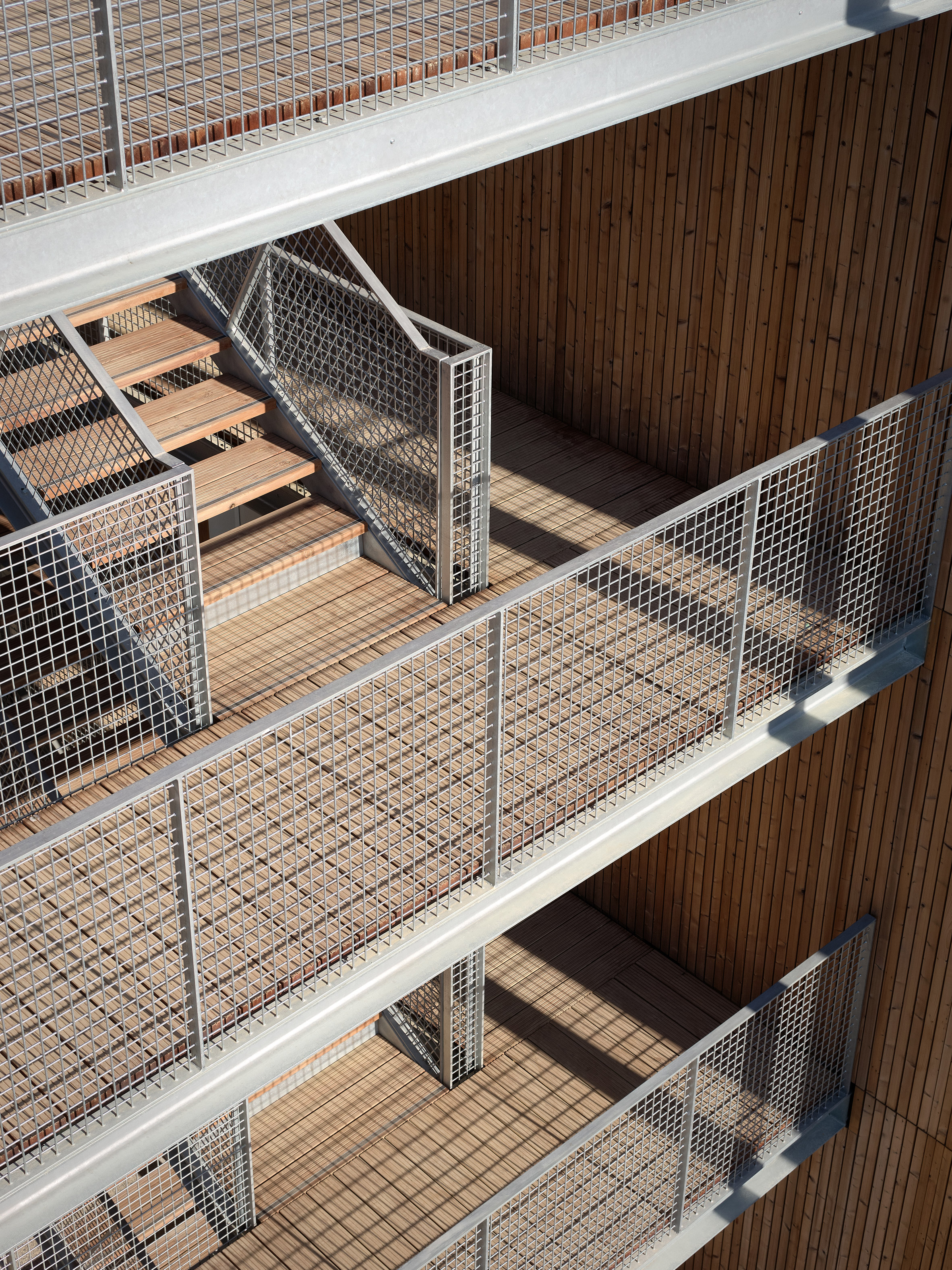 Each house has a small south-facing garden, which is connected to a living room that is protected from the sun by a projecting awning made from the same slatted wood as the facades.

The project’s design brief stipulated that timber construction should be used throughout. To reinforce this sustainable approach, the architects clad the buildings entirely in vertical wooden slats. 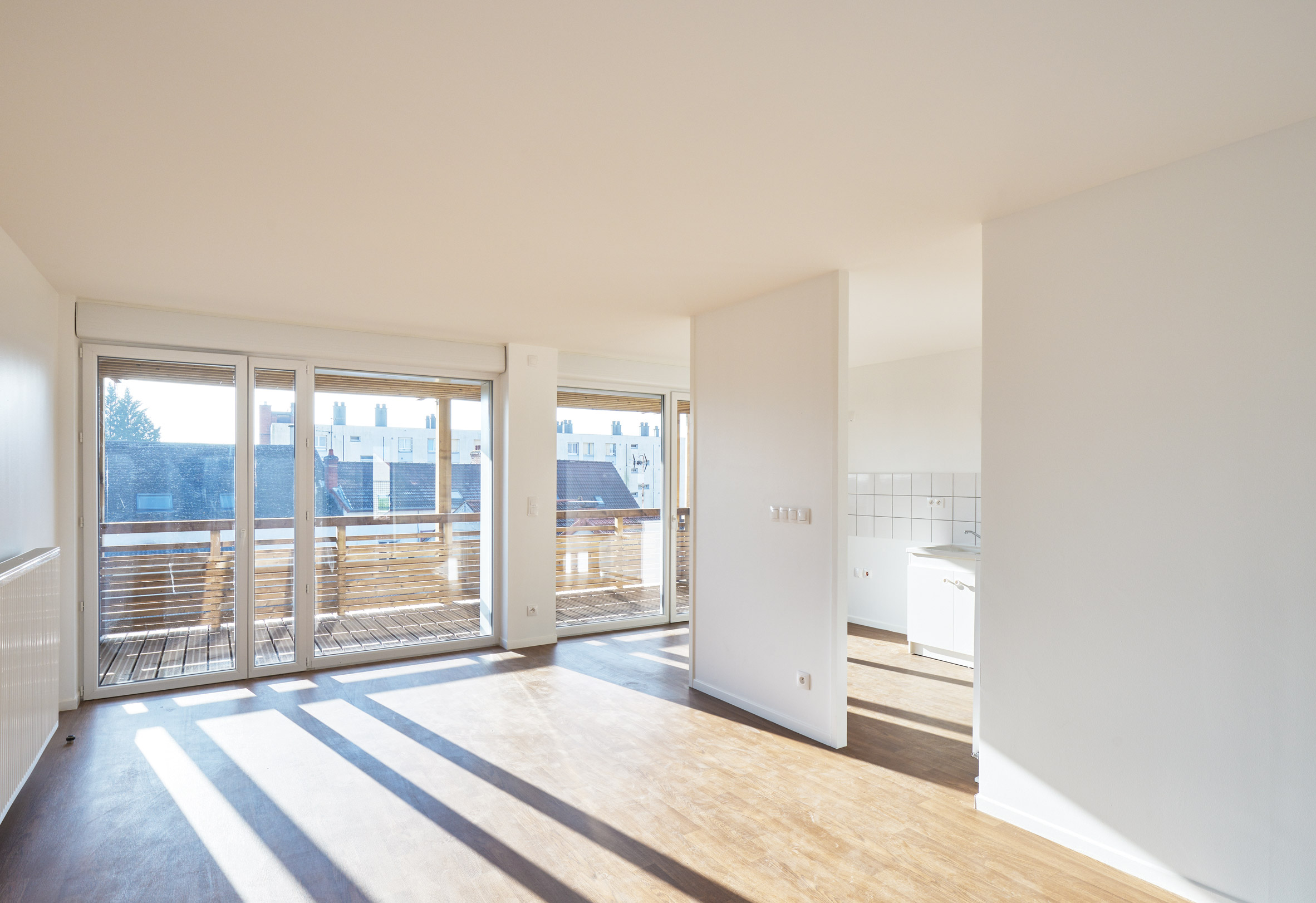 The cladding material lends the exterior surfaces a rhythm that continues across the sides of the balconies, where the timber battens are separated to allow views out while protecting the interiors from direct sun and unwanted overlooking.

The roofs of the houses are tiled in a colourful diamond pattern that offers a cheerful contrast to the surrounding monotone buildings when viewed from the neighbouring developments. 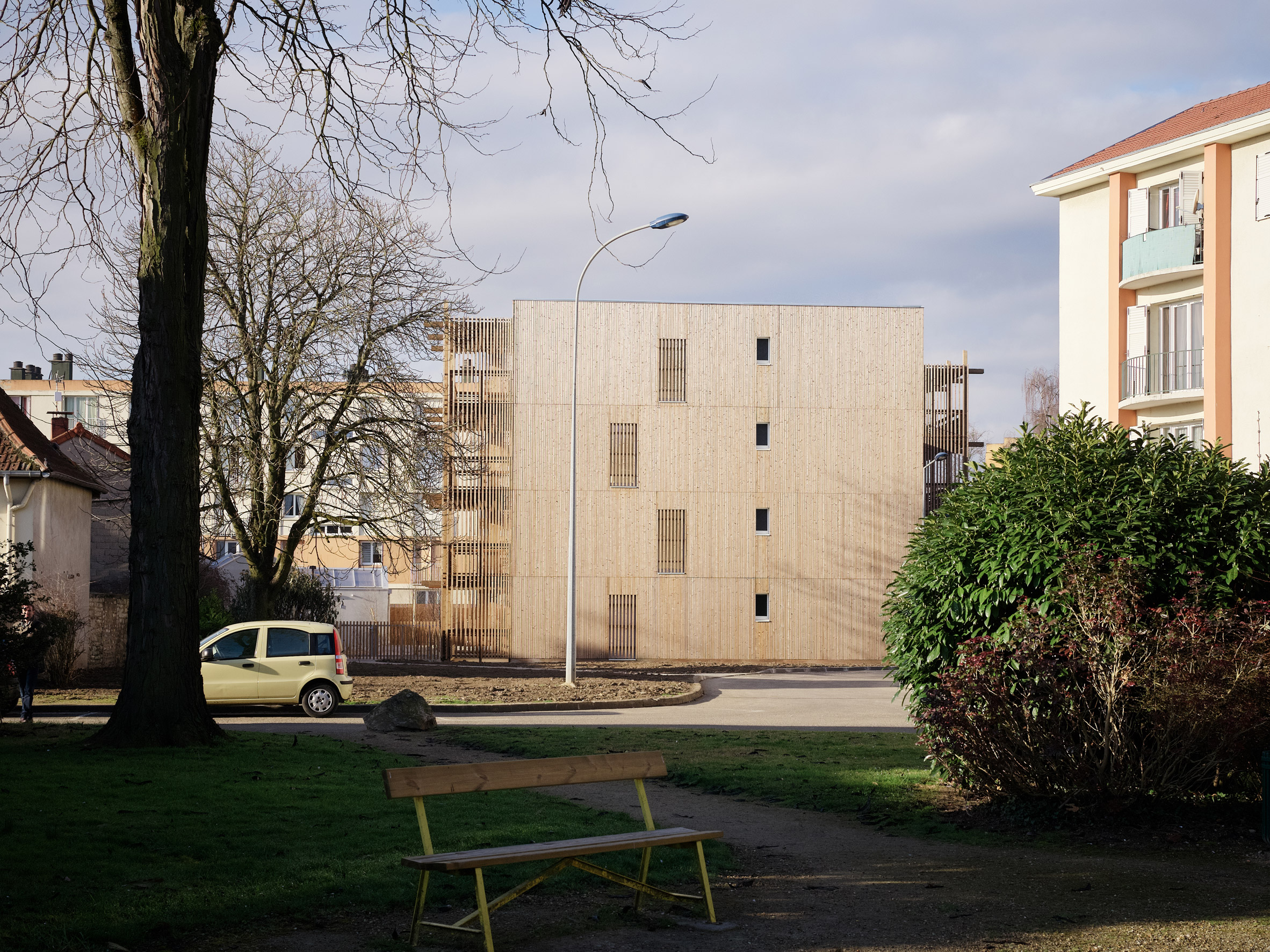 The diamond pattern references roofs found on historic buildings in Burgundy, helping to create a meaningful link with the region’s history.

The studio’s previous projects include an apartment block in Paris featuring angular balconies framed by white-concrete screens with a latticework pattern that resembles brick masonry.

Photography is by David Foessel. 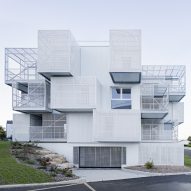