O’Donnell + Tuomey has unveiled plans for three interconnected, angular, red brick opera houses in Shanghai, on the site of the 2010 Expo.

The Dublin-based architecture practice has designed three performance venues, each with planted gardens placed on their angled rooftops to create an undulating park for visitors. 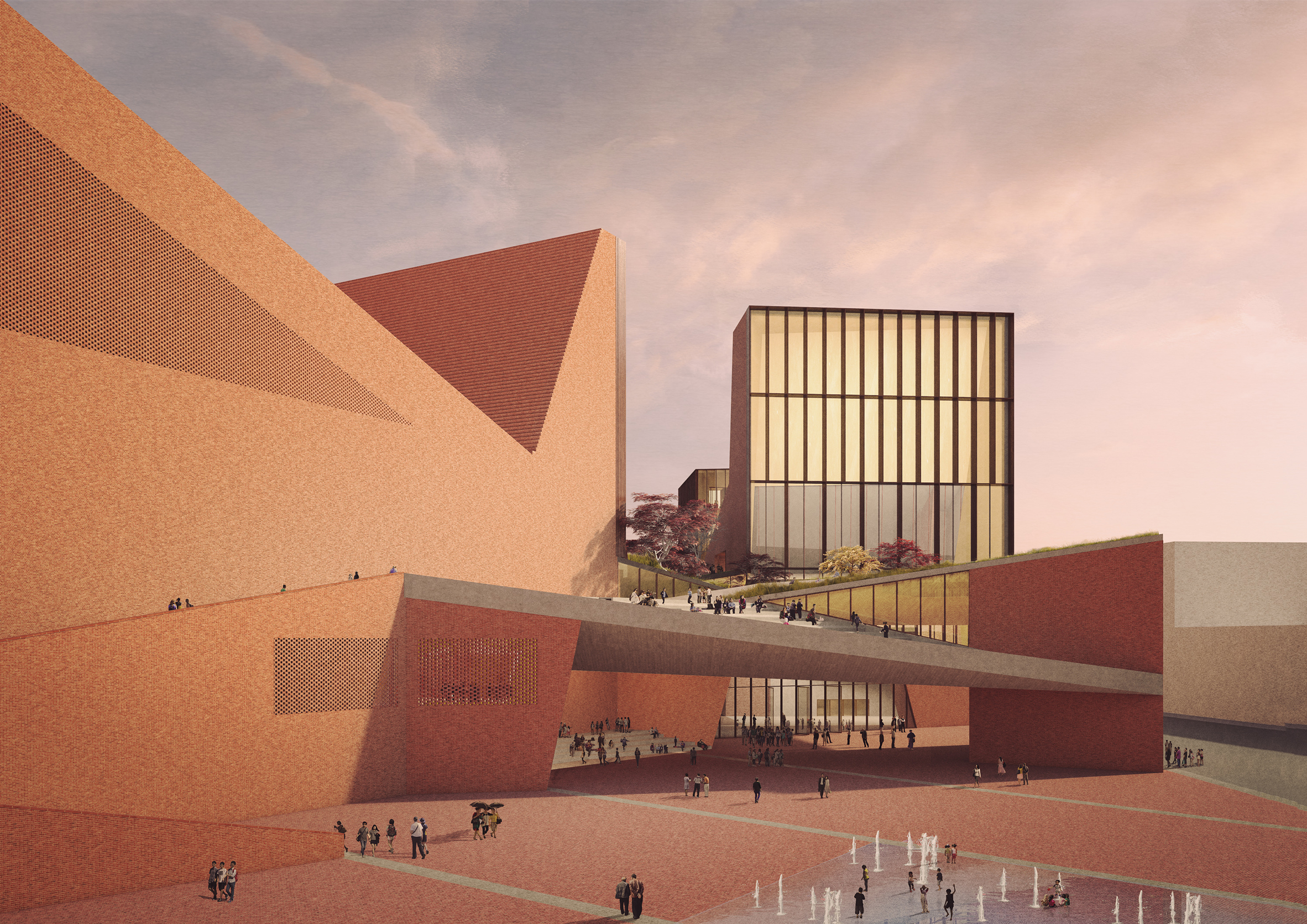 Conceived as a “city of opera”, the 1,800-seat opera hall, 650-seat theatre and a 400-seat performance space will be arranged around a “town square” foyer.

“The theme of our plan is ‘convergence’,” said the architects in a statement. “Building on the established tradition of promenade, procession and flow, we see the public spaces of the city of opera like grand station halls, civic spaces of community congregation.” 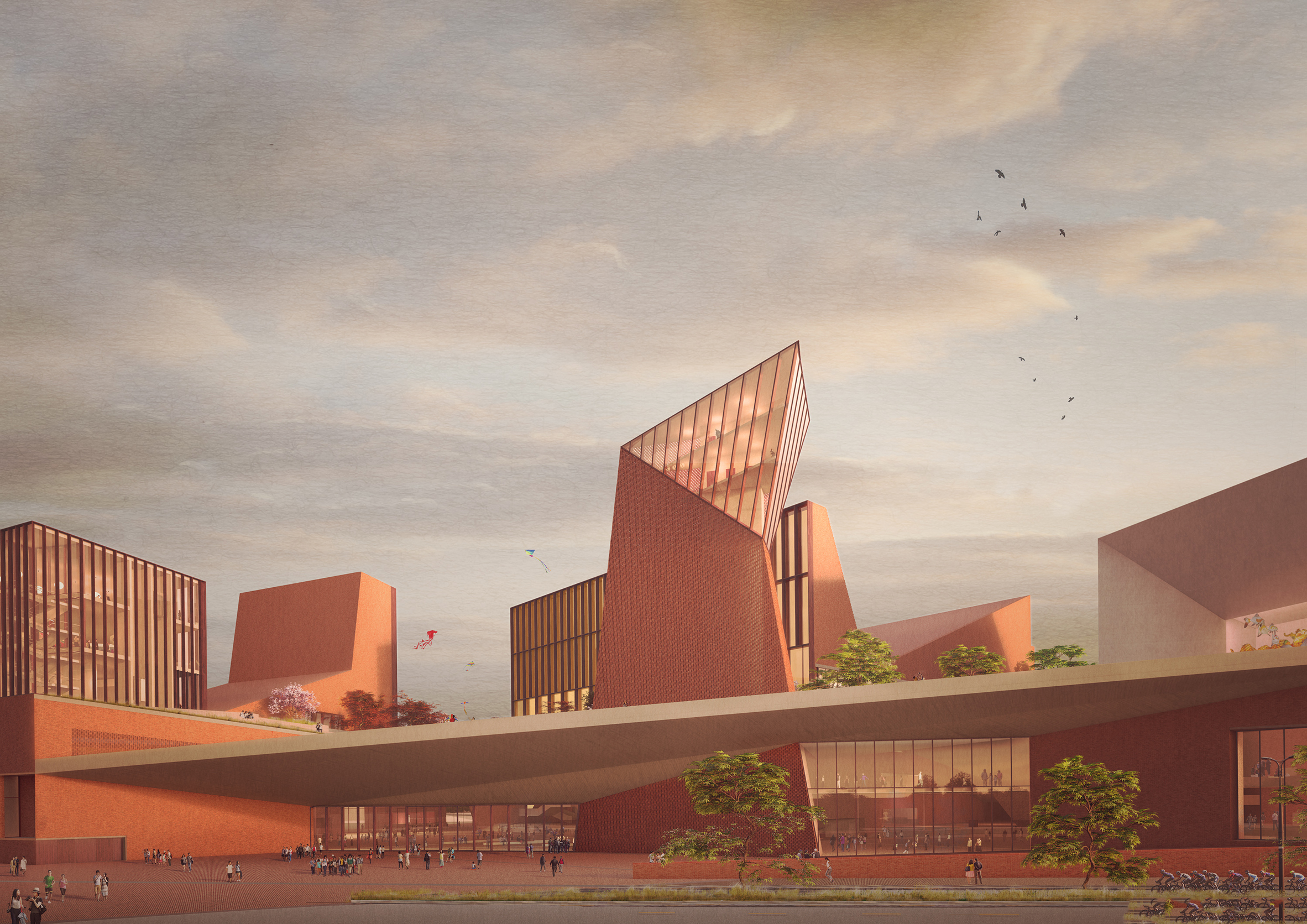 The architects describe brick as the “fundamental material of the project”, and the building’s walls, floors and roofscapes will be made from the material.

Inside the opera house, brickwork piers will contain stairs and lifts, with concrete stairways and ramps wrapping around the exterior of the separate venues. Renderings show one auditorium formed almost entirely of brick, including the balconies and boxes. 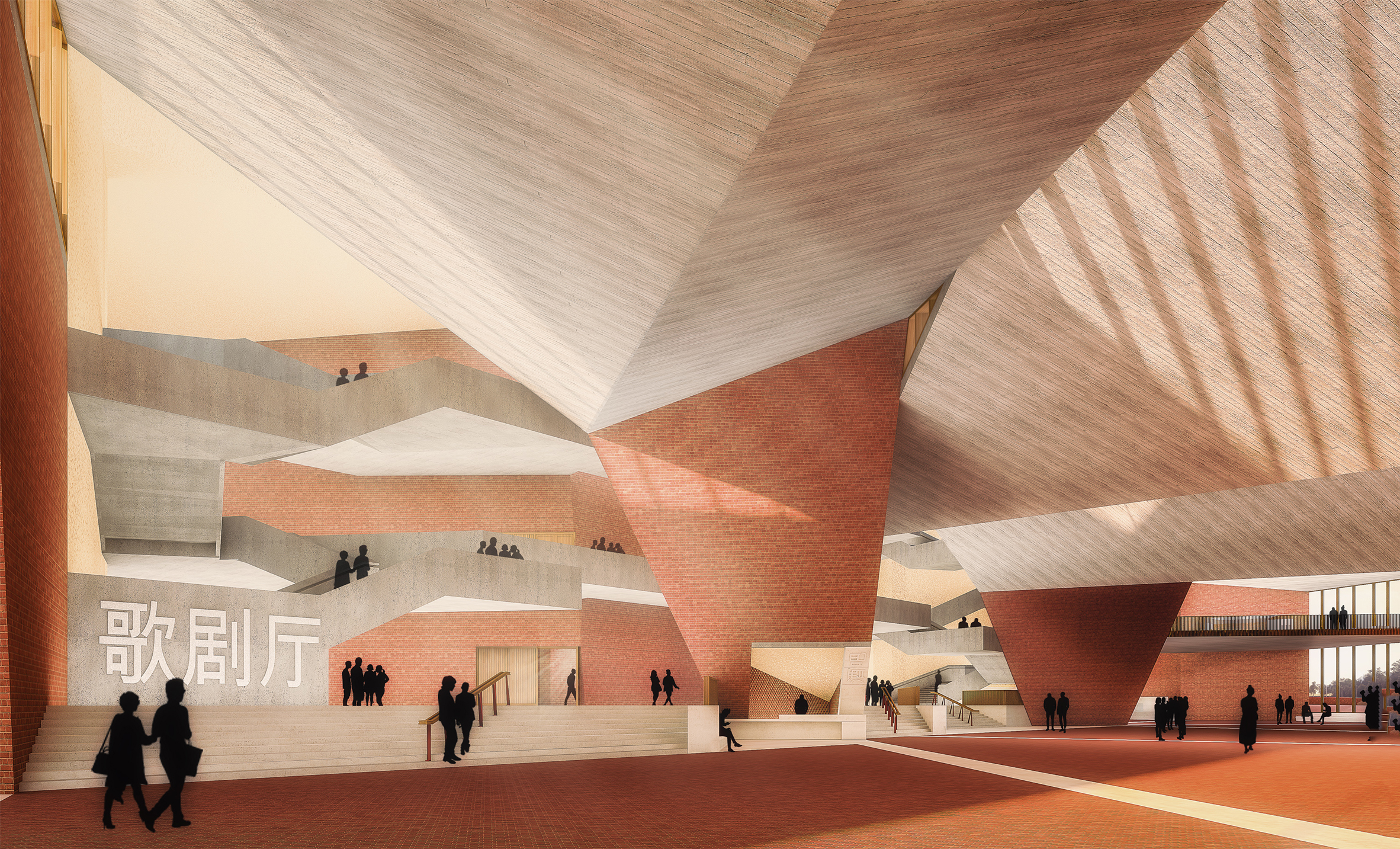 Large-scale faceted brickwork buildings have become a speciality of Irish practice. The student centre for the London School of Economics and its planned Olympicopolis masterplan both make extensive use of red brick.

Each of the Grand Shanghai Opera House’s three venues has a distinct roof shape, with a river-viewing tower and a glazed tower containing rehearsal rooms that will be illuminated after dark. 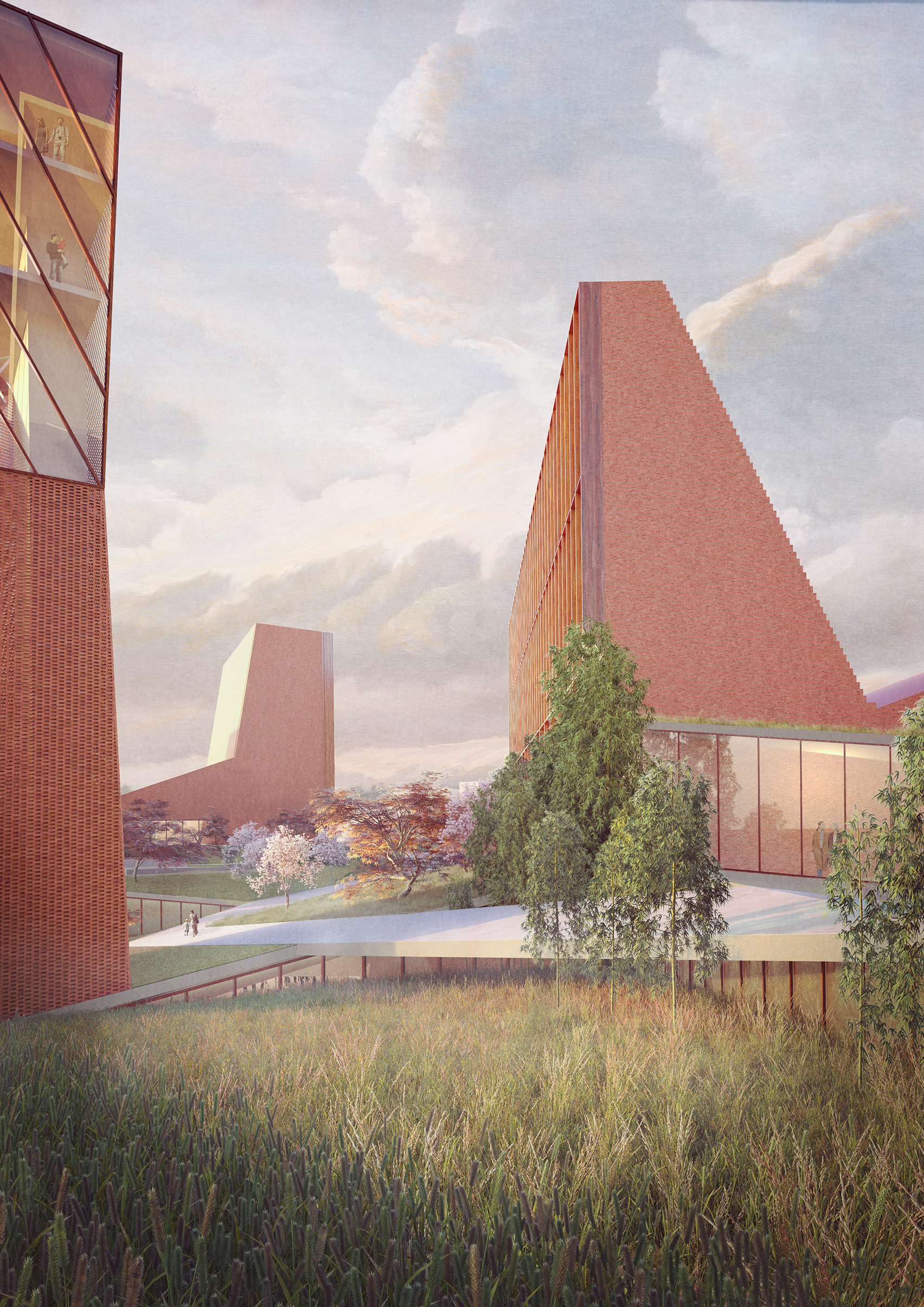 “The building glows at night through perforated brickwork, reflecting in the river like a prismatic lantern,” said O’Donnell + Tuomey.

Inside the main foyer, large windows will be set between the irregular concrete beams to allow daylight to enter the foyer spaces. 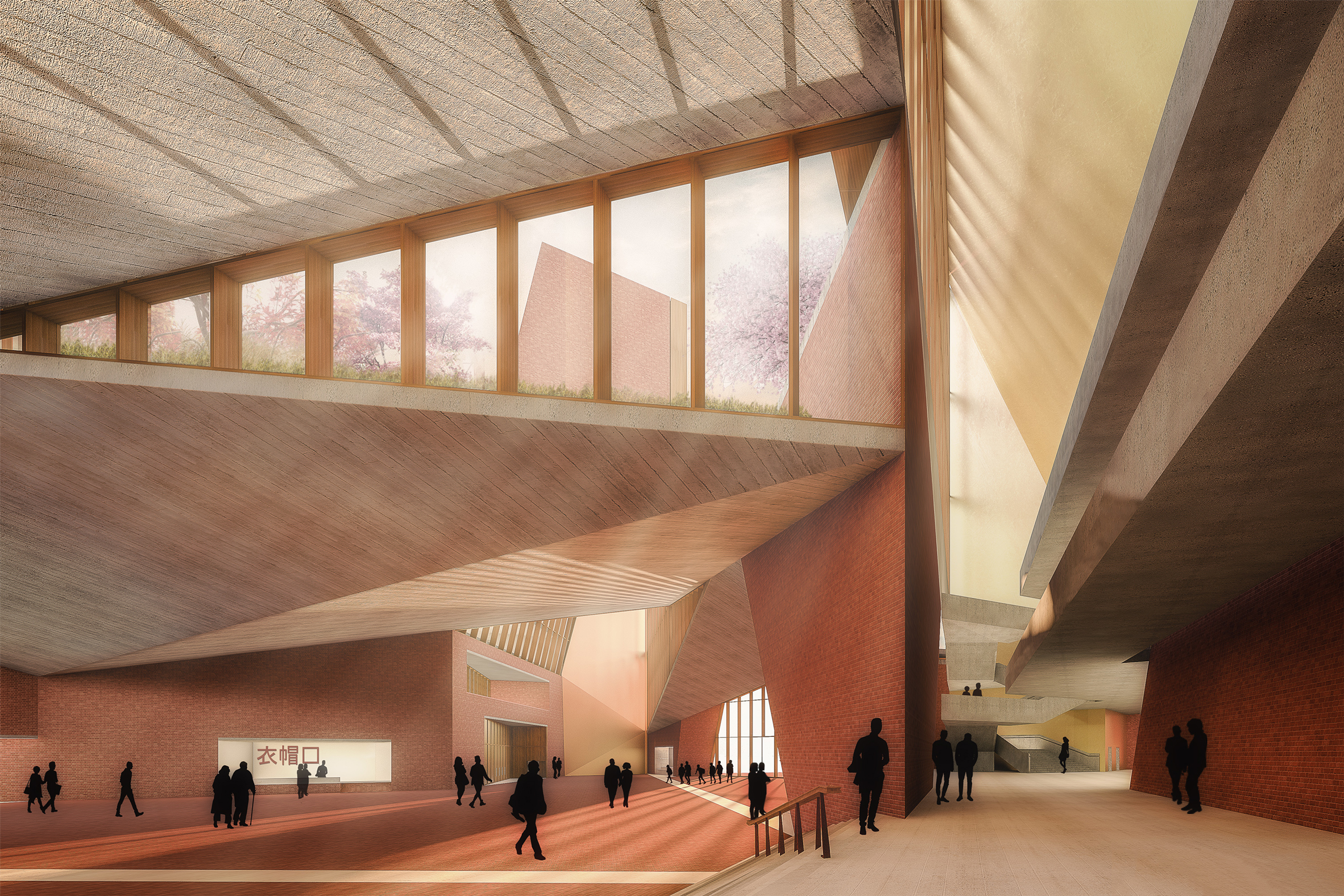 “The beams are set at tilted angles to each other, interlocking in a see-saw arrangement to create clerestory daylighting across the foyer spaces,” the studio said.

Along with the three performance spaces, the 110,000-square-metre cultural complex will have an outdoor performance area, cinema screens, and museum and exhibition spaces. 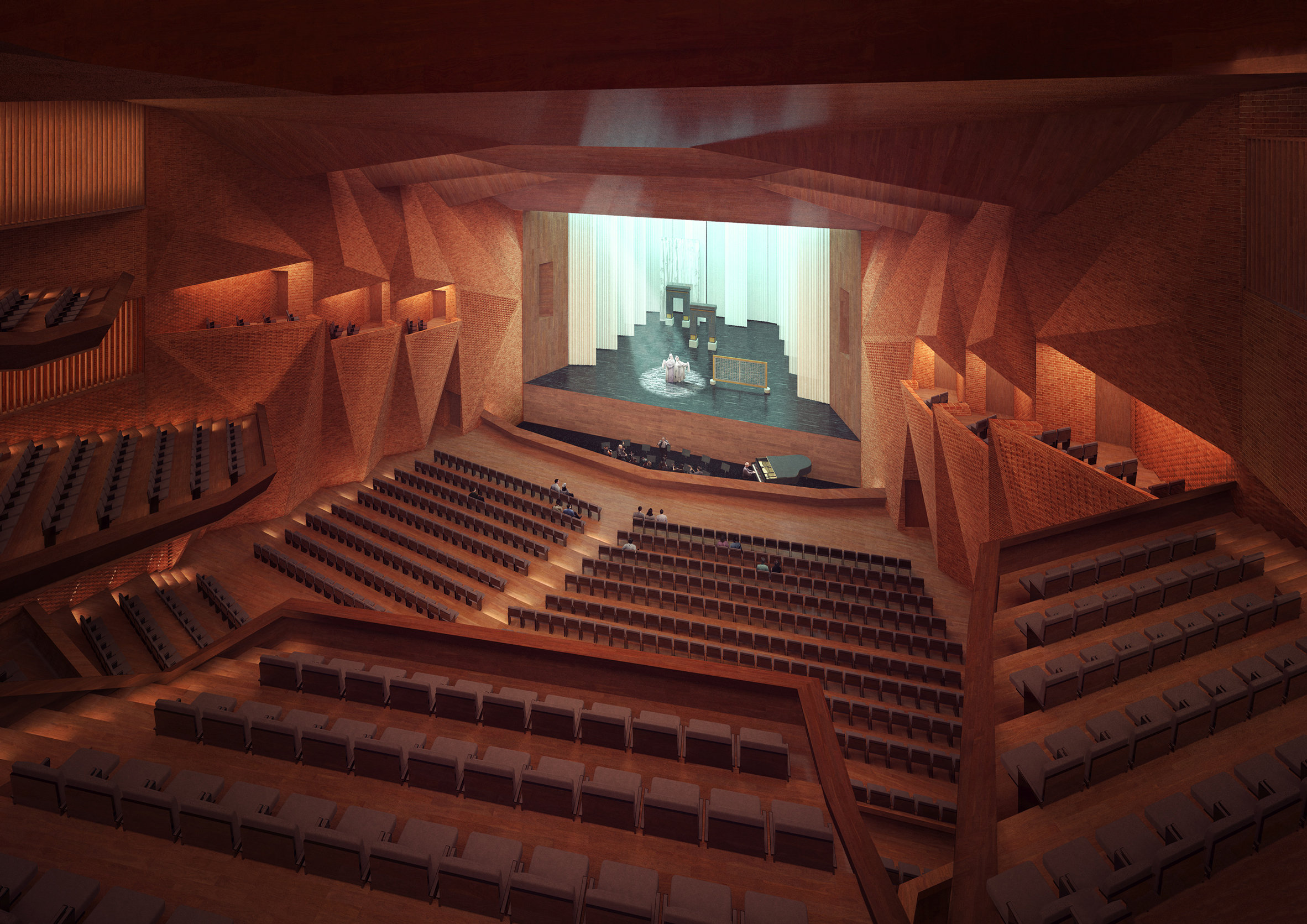 It will also contain reception and backstage areas, meeting rooms and banquet facilities, a library and education facilities.

The opera house is part of a regeneration masterplan for a site on bend of the Huangpu river, where the Shanghai Expo was hosted in 2010. 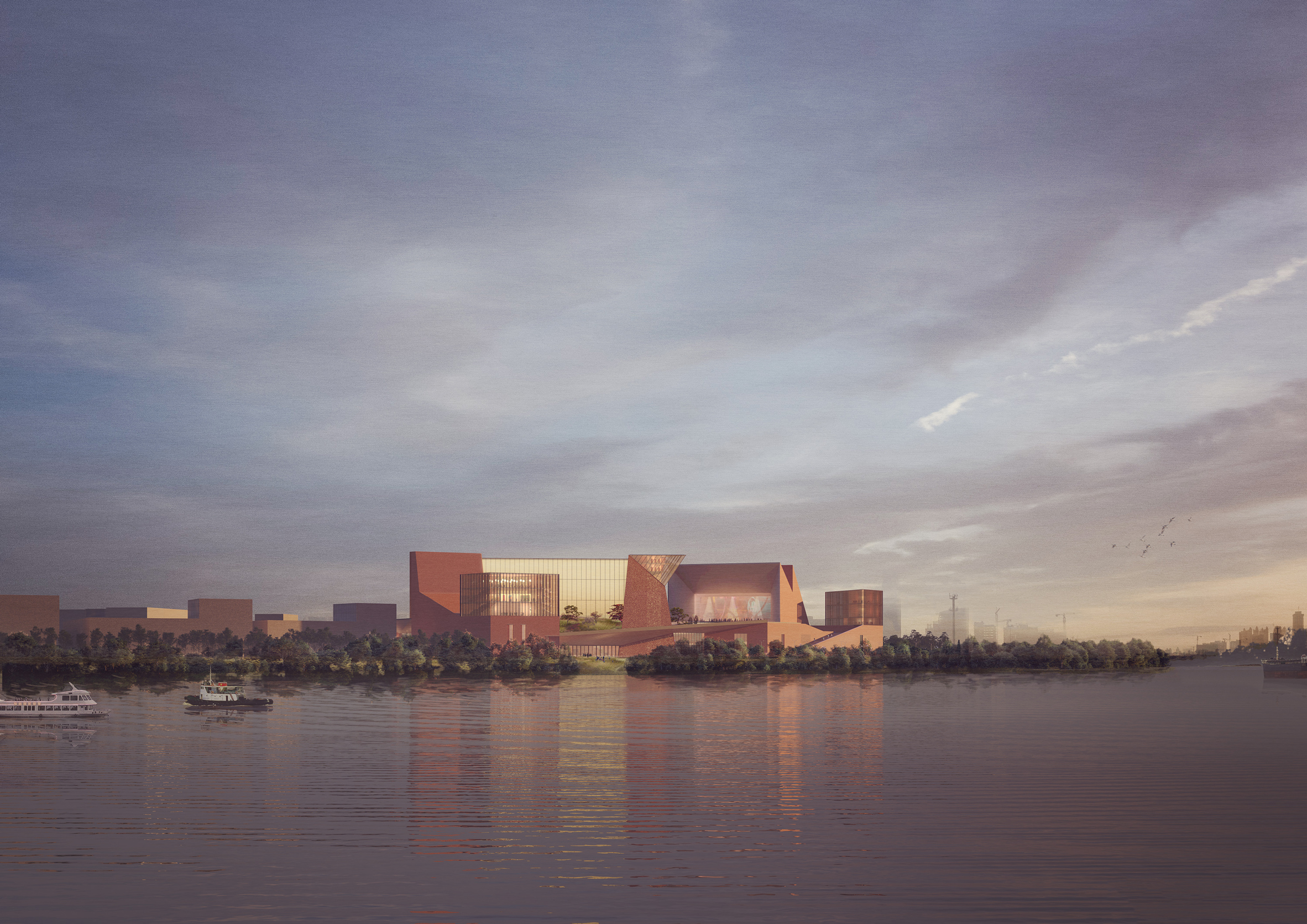 China’s largest city has seen a succession of new performance venues designed by prominent architects in recent years. Foster + Partners and Heatherwick Studio created an arts centre on the waterfront with a rippling curtain-like facade of bronze tubes.