Danish artist Olafur Eliasson has completed his first building – a fortress-like office in the Vejle Fjord in Denmark, called Fjordenhus.

Fjordenhus is the headquarters of Kirk Kapital, which is the holding and investment company for three brothers who are direct descendent of the founder of Lego. But it also features a publicly accessible ground floor.

It is the first building entirely designed by Studio Olafur Eliasson, which has previously collaborated on architectural projects including the Harpa concert hall in Reykjavík and the Serpentine Pavilion 2007 in London, and built smaller structures including the Cirkelbroen bridge in Copenhagen.

The building rises from the water in the harbour of the city of Vejle. It is accessed across a footbridge, with a subterranean passage also connecting the building’s basement to the dockside. 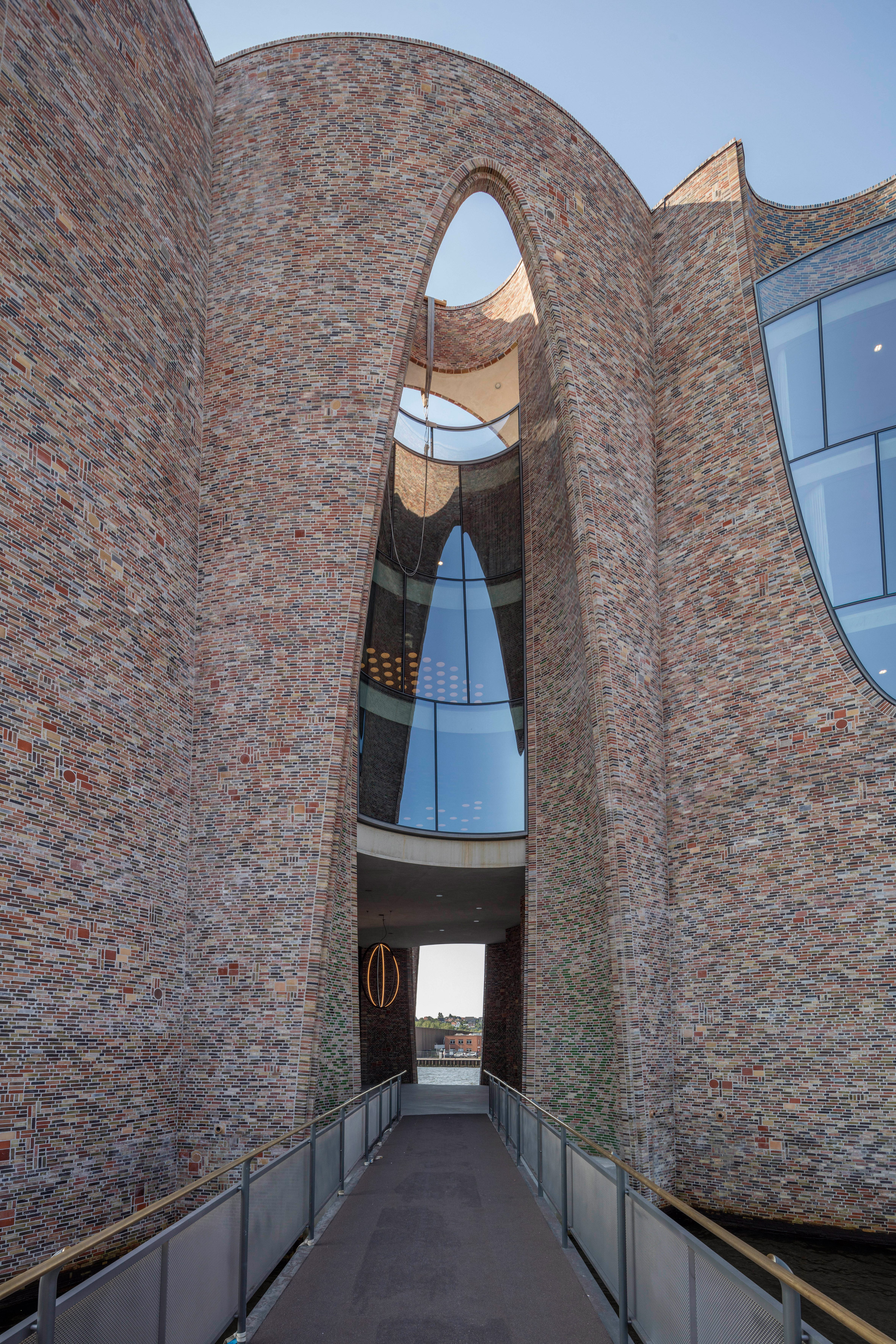 The footbridge leads into the building’s public ground floor, which offers views out across the harbour and is decorated with site-specific artworks created by Eliasson. Above this double-height space, there are three storeys of offices for Kirk Kapital.

Fjordenhus’ unique form was created to reference the environment of the Vejle Fjord.

“[The clients said] we would like to build a working environment for the foundation that we have, we would like to emphasise the qualities that are important to us: nature, light, the weather, the seasons and the Vejle Fjord,” Eliasson told Dezeen. 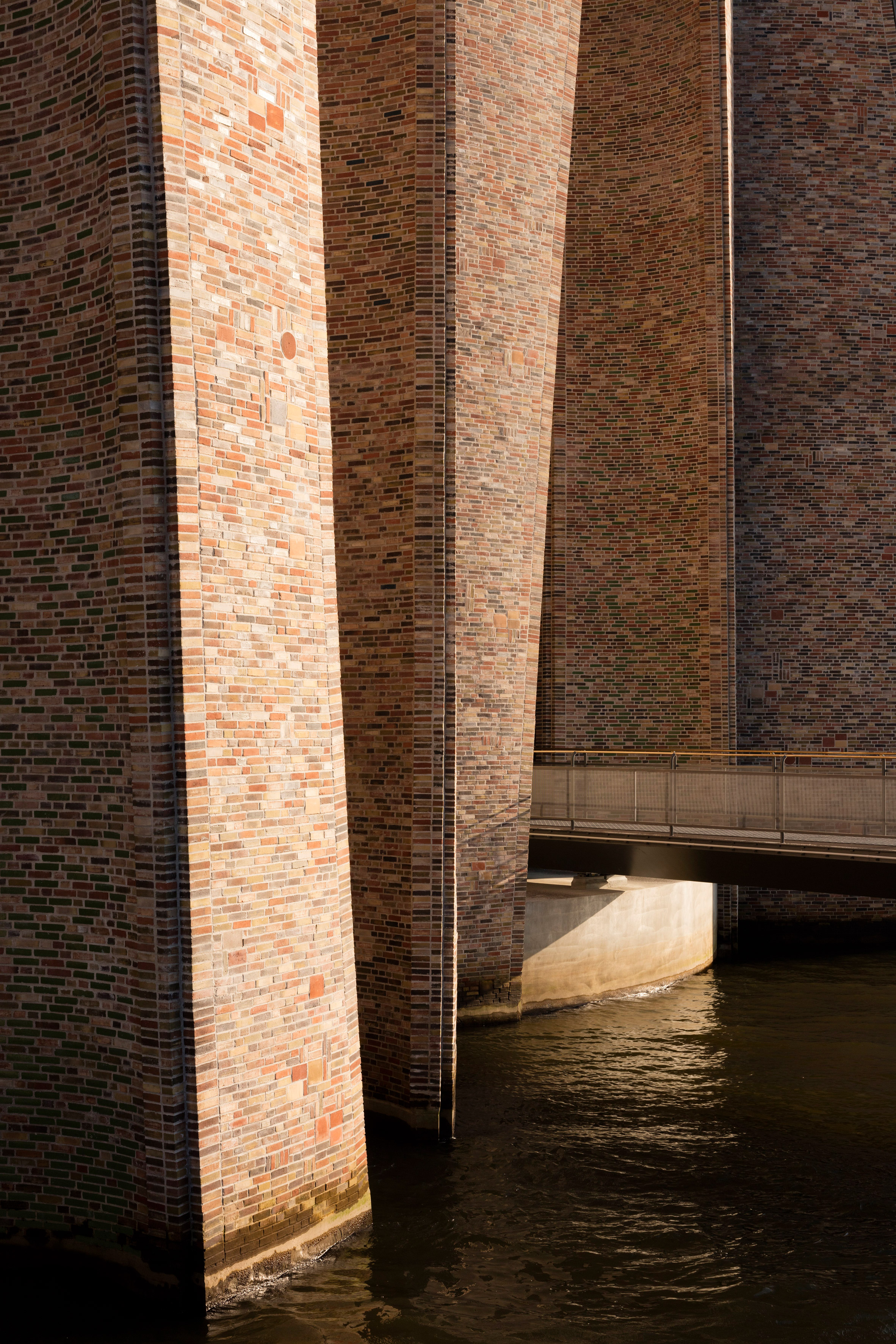 “We actually asked the client whether we could build in the water and take on an ephemeral language, an organic language, that might be a starting point for the design,” continued Eliasson. 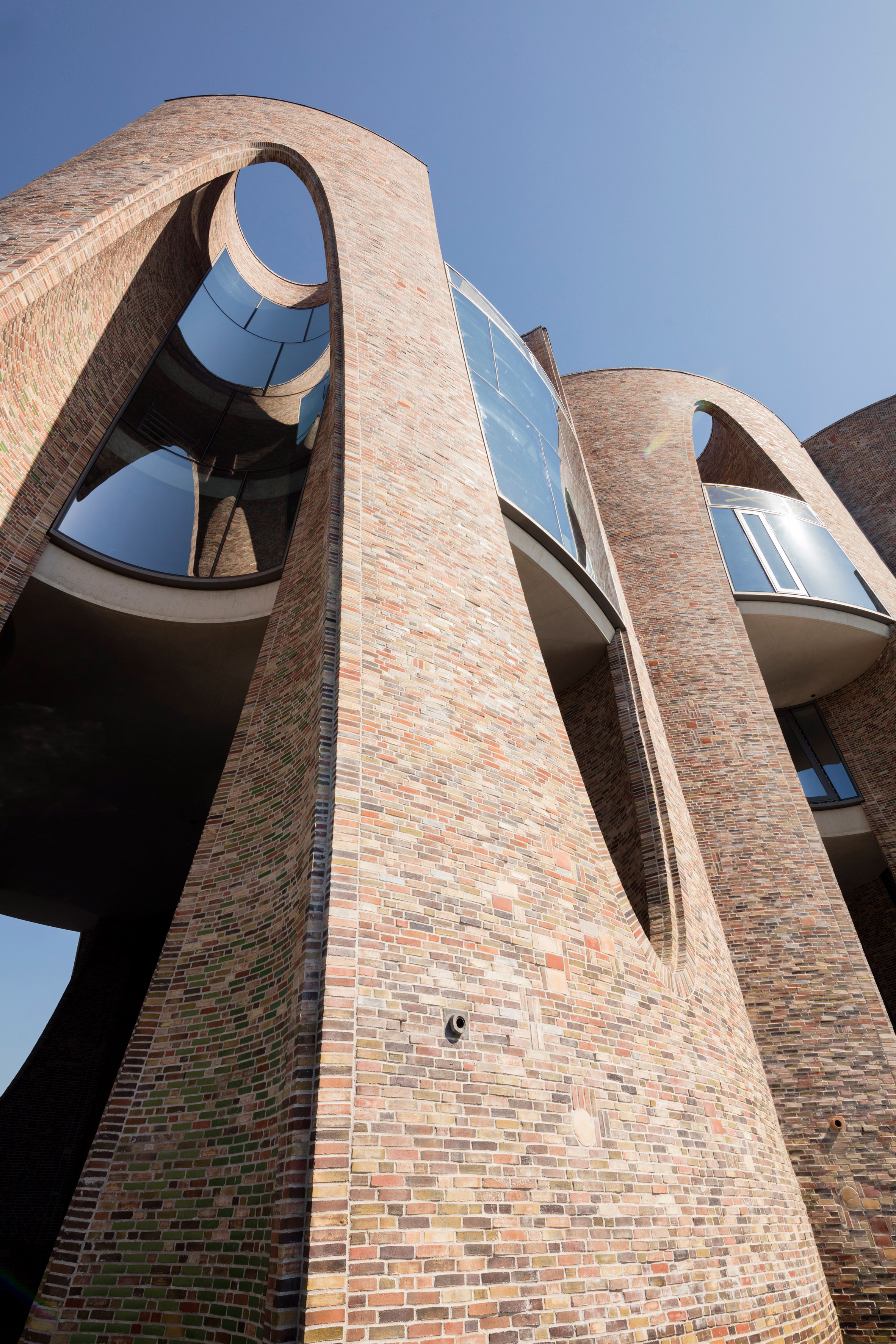 Part of the wider development plan for the Vejle harbour, the building stands next to a piece of reclaimed land that is also being developed by Kirk Kapital. Along with several housing blocks, this development contains a plaza and jetty designed by landscape architect Günther Vogt.

“They has been quite some effort over the years, as in many cities, to revitalise the harbour, turning the city’s main face from the city square to draw attention to the harbour,” said Eliasson.

It is envisioned that the building, and plaza will become the destination on a public promenade from the centre of the city to the fjord.

“The brothers said we would also like to give something back to the city,” explained Eliasson. “I hope the residents of Vejle will embrace Fjordenhus and identify with it as a new landmark for the harbour and their city.” 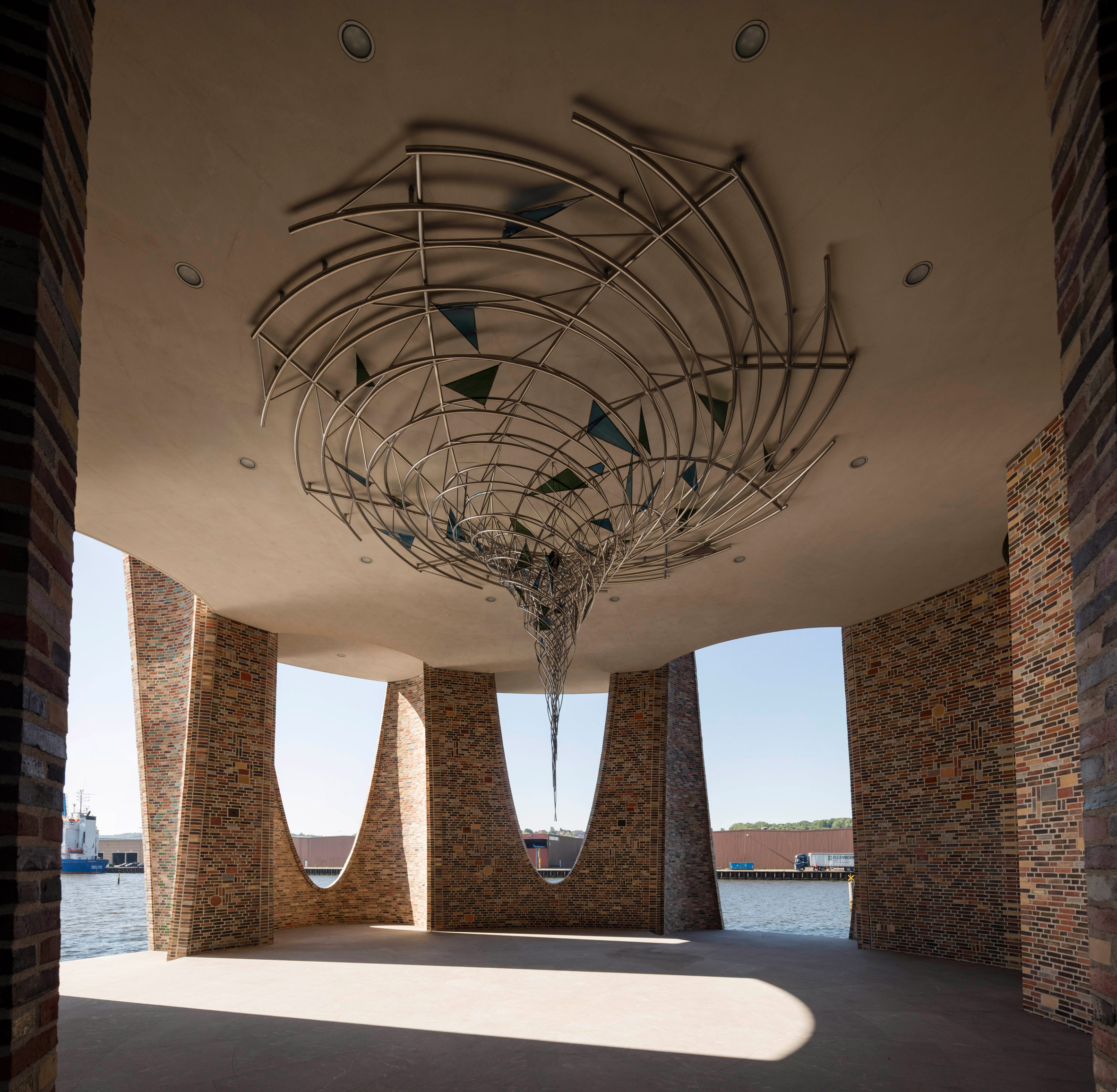 The building’s geometric form is made of four intersecting circles. Each of these cylinders has voids carved out of them, which are circular at one end and elliptical at the other. Partially glazed, arch-shaped openings are also cut from these volumes.

Built around a concrete structure, the building’s inner and outer walls are built from 970,000 bricks. The artist chose 15 different hues of unglazed brick, along with blue, green and silver glazed bricks. 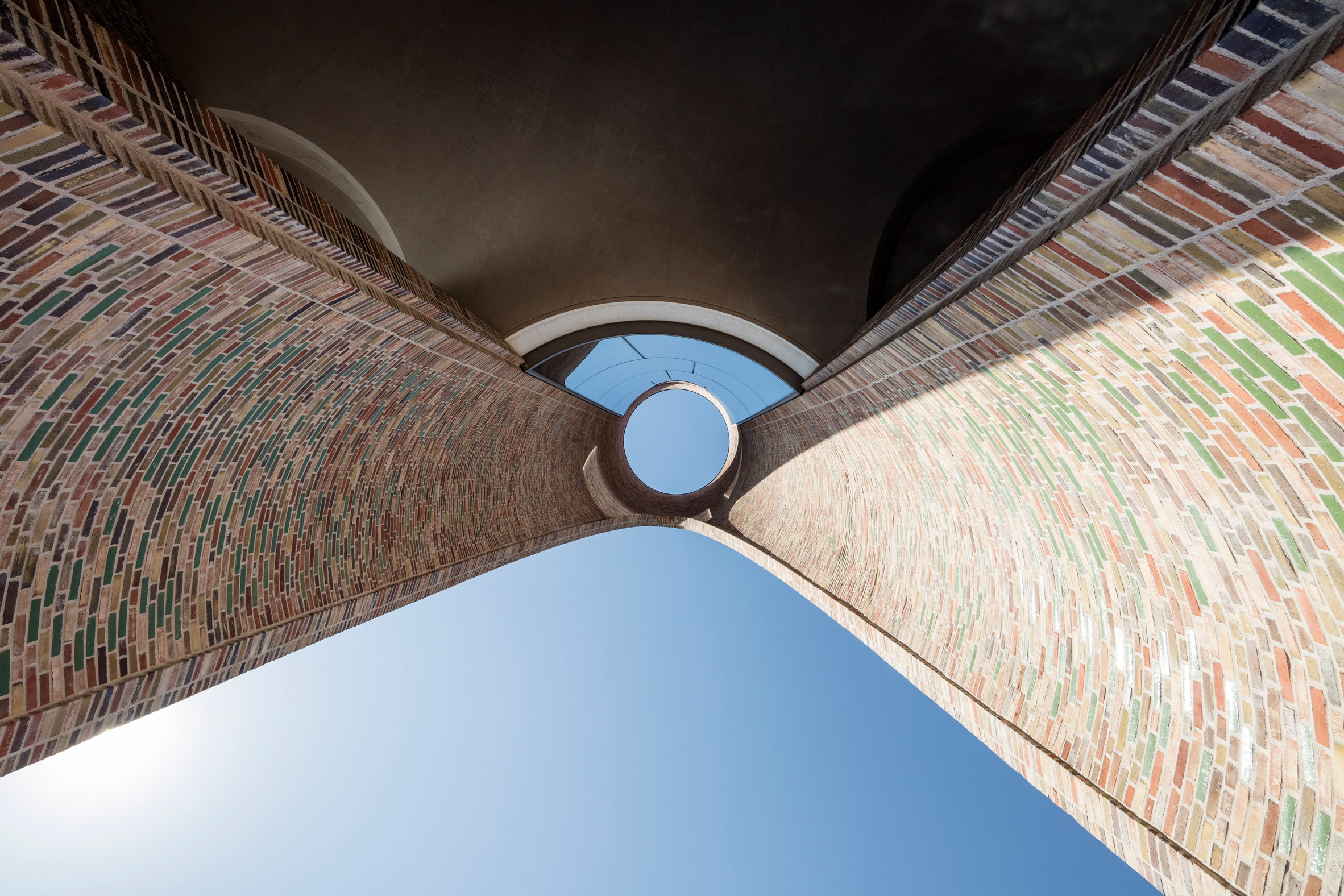 Each of the external facades has a different combination of bricks depending on the light that it will receive, with the glazed blue bricks used more frequently near the base and blue bricks more often at the top of the building.

The internal spaces also have combinations of bricks specific to the room’s uses. For example, only grey and silver bricks are used in the stairwells.

Hollow ventilation bricks are incorporated into the internal facades to regulate sound and temperature.

The placement of each visible brick was digitally chosen by the Studio Olafur Eliasson to create what the artist referred to as “mini-artistic compositions”. 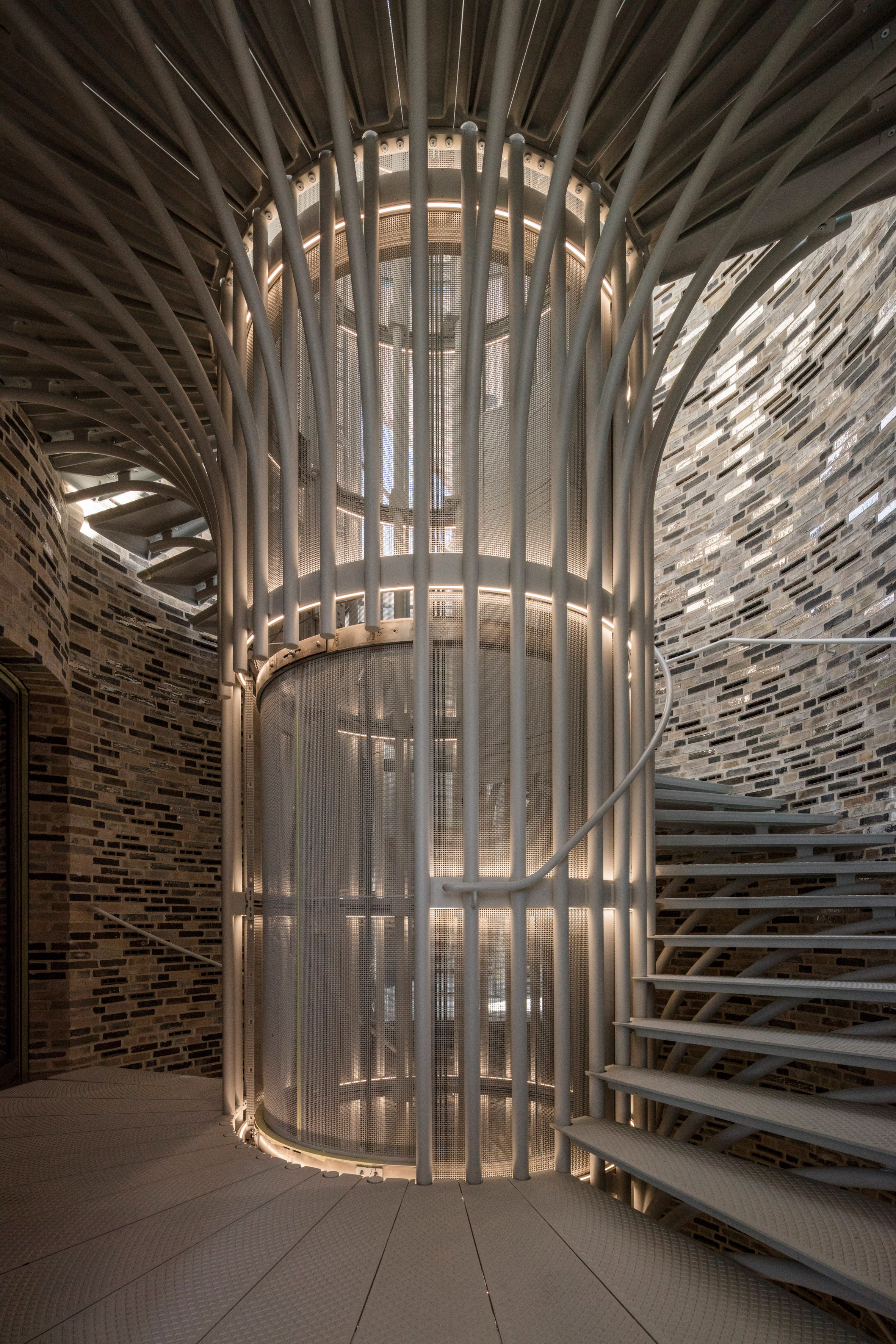 Fjordenhus contains contains office space for all three Kirk Kapital directors and their staff. There are also meeting rooms, a board room, a dining room and a roof terrace.

All the tables and office furniture, apart form the chairs, are also designed by Eliasson. 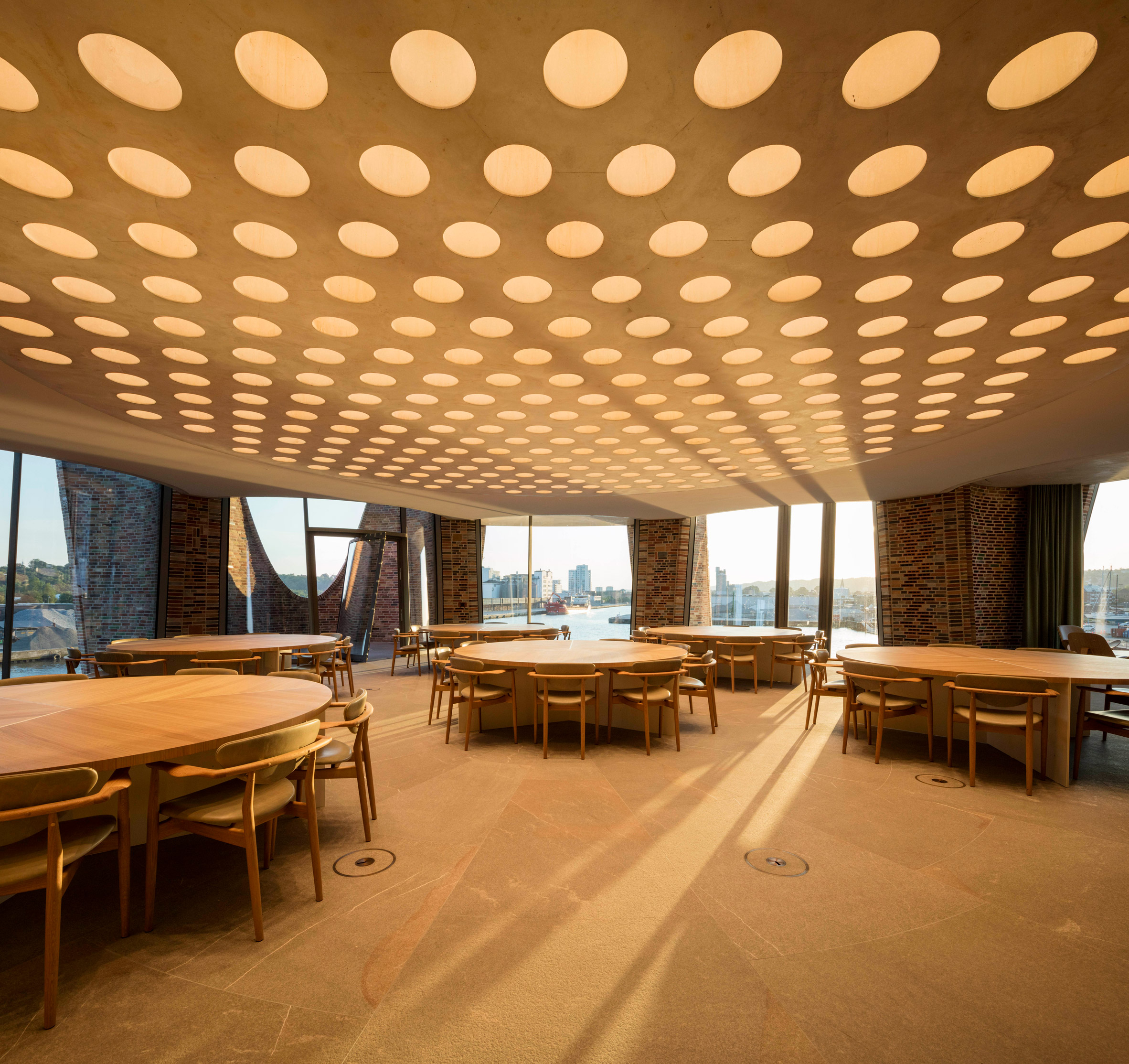 According to the artist, the building allowed him, and the studio to take the experience gained working on numerous artworks and installations, to a larger scale.

“I must pay tribute to the courage of the client for not only accepting that idea but also having asked an artist who has not built before, luckily I have Sebastian [Behmann] who works with me on my side, so I didn’t flake it all together,” he said.

“This allowed us to turn years of research – on perception, physical movement, light, nature, and the experience of space – into a building that is at once a total work of art and a fully functional architectural structure.” 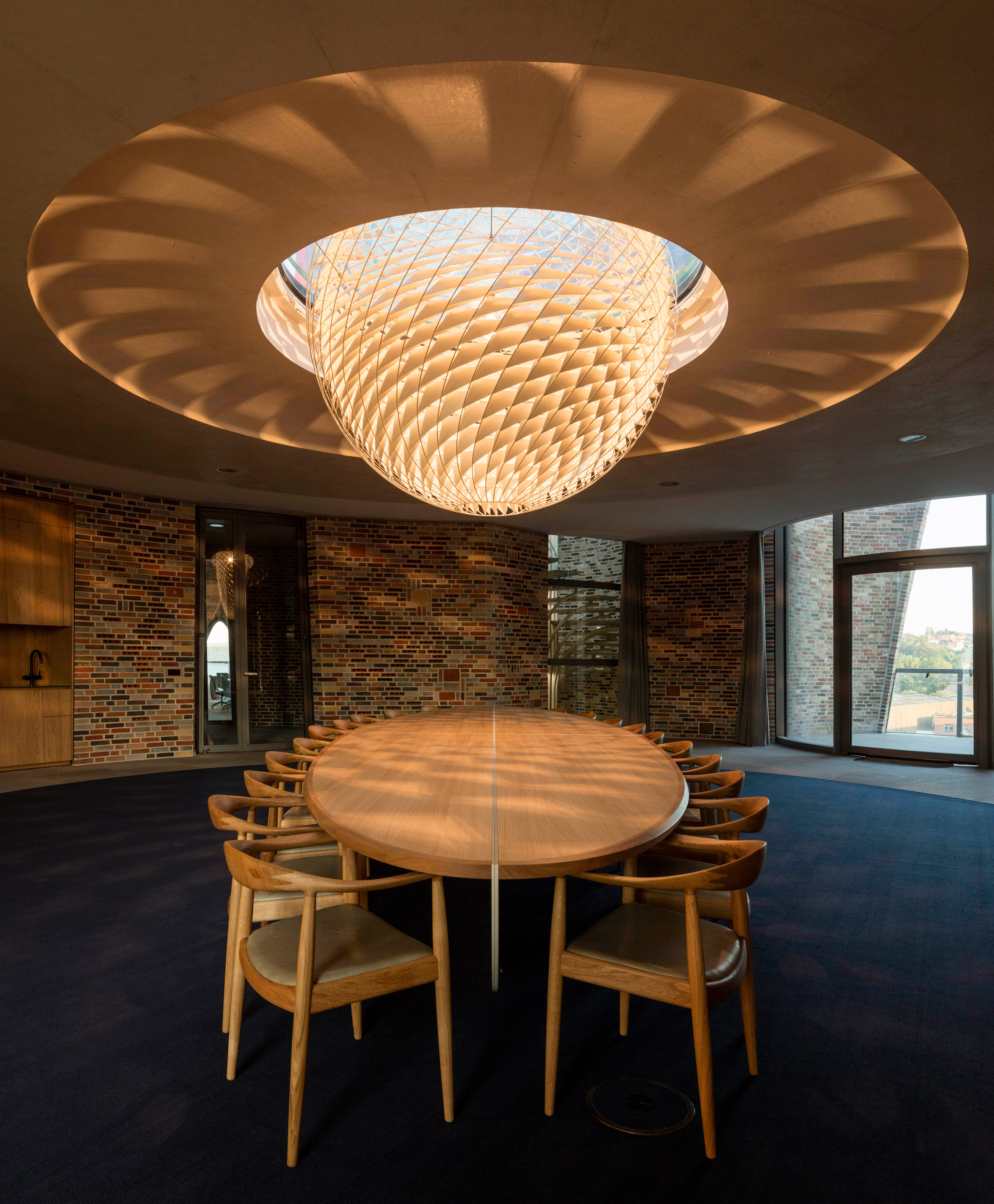 The studio hopes that the project will not be the last architecture project that they work on. To complete future projects, Eliasson and Behmann established a dedicated architectural practice called Studio Other Spaces (SOS), in 2014.

Photography is by Anders Sune Berg, apart from where otherwise stated.

The post Olafur Eliasson’s first building is a castle-like office in a Danish fjord appeared first on Dezeen.