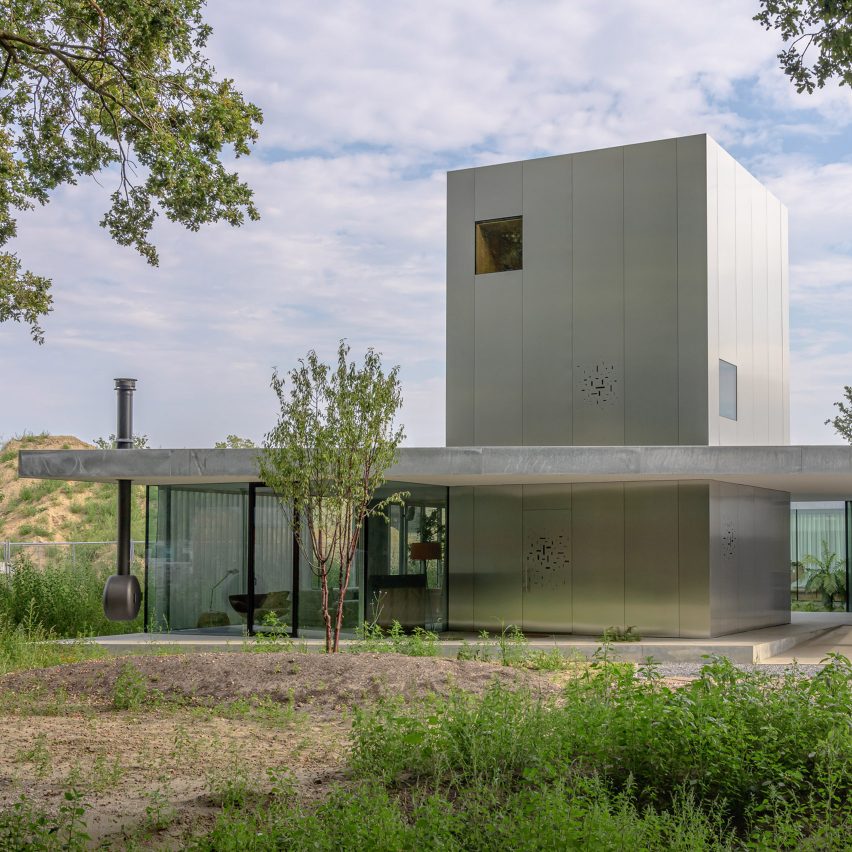 Studioninedots has created a house in the Netherlands that is arranged as a patchwork of alternating courtyards and industrial low-lying pavilions.

The dwelling, named Villa Fifty-Fifty, was created in a new residential neighbourhood in Eindhoven for a young family who wanted to live in connection to nature.

It was designed by Dutch architect Studioninedots‘ to encourage indoor-outdoor living, with the same amount of external spaces dotted across the site as there are internal areas.

“Being the proud owners of a garden, at last, our clients’ wish was a family home where they could live more with nature, where they could experience nature from the entire house,” the studio told Dezeen.

“We could have designed a compact house with a garden, with a glass facade as a cliché that it ‘seamlessly merges indoors and outdoors’,” it said.

“Instead, we approached Villa Fifty-Fifty the other way around. We set ourselves the challenge to design beyond maximising transparency and treated all functions with equal importance, regardless of their obvious location.”

The dwelling is located in Strijp R, a new neighbourhood in the city that is flanked by a forest and an industrial area that was once home to factories owned by electronics brand Philips.

Its size was dictated by the defined borders of the plot purchased by the client, which was chosen as it could comfortably accommodate a house and garden.

However, rather than creating a house with an adjoining outdoor space, Studioninedots chose to “stretch the building envelope” right to the edges of the site.

The functional pavilions and external courtyards are all roughly equal in size but are randomly organised to ensure they are independent of each other.

Some are left open or partially sheltered, while others are lined completely with glass or opaque walls, providing each space with its “own atmosphere and light”.

Amongst the enclosed pavilions are the bedrooms and bathrooms, as well as a living room, office and shed.

One of the most private spaces is a volume containing the children’s bedrooms, which takes the form of a large polished aluminium-clad tower that doubles as a viewpoint.

This tower disrupts the otherwise low-lying form of Villa Fifty-Fifty and is intended to function as a self-contained “tiny house” that can support the needs of the children as they grow up.

“The twin daughters are growing up and their rooms in the tiny house in the tower are designed to be self-contained, with more privacy and facilities to adapt the space for future independent living,” explained the studio.

The choice of perforated, polished-aluminium cladding for the tower complements the use of textured grey-hued materials used throughout the rest of Villa Fifty-Fifty, including flagstone walls, steel columns, corrugated polycarbonate and cobblestone paving.

These materials were chosen for a raw, tactile finish, while also affording the house an industrial aesthetic that nods to the history of the site.

Colour accents throughout Villa Fifty-Fifty are limited to the greenery and plants, which helps retains focus on the outside.

Bolder interior finishes can be found in the more private, hidden spaces, however, such as in the tower where walls are painted a gentle pink to emulate cherry blossom, and a dark green bathroom is intended to mimic lush forests.

Other projects by the studio on Dezeen include a renovation of a 1970s office building in Hilversum and an office in Hoofddorp within which an angular wooden staircase takes centre stage.

Photography is by Frans Parthesius.

The post Outdoor space has "equal importance" to interiors in Villa Fifty-Fifty appeared first on Dezeen.