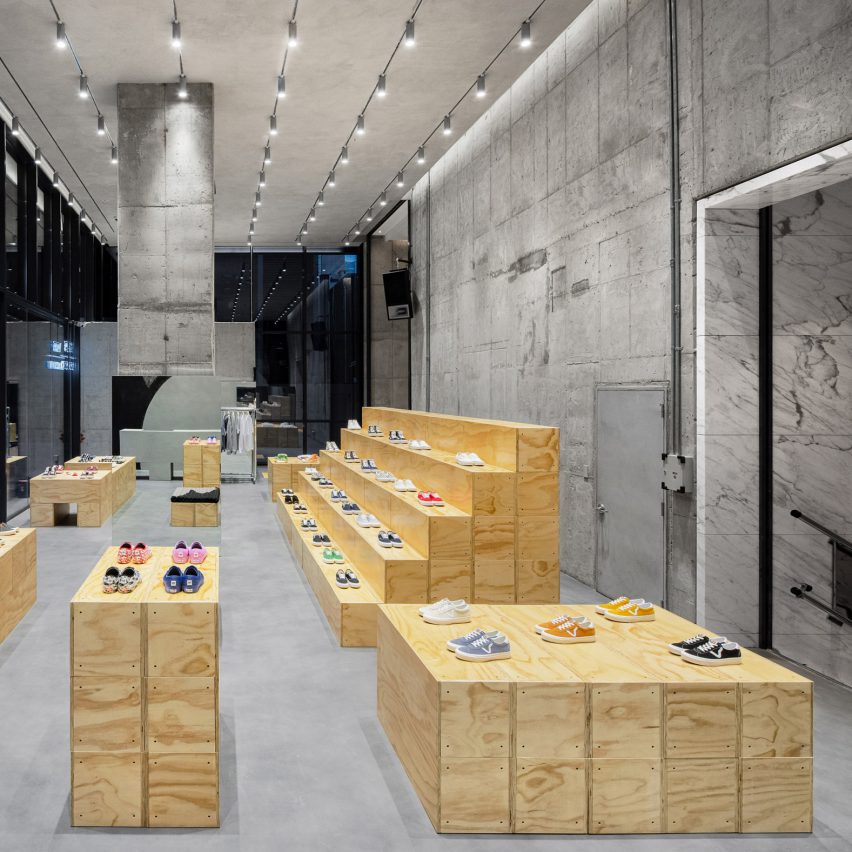 Architecture studio Andrea Caputo has filled the Vans flagship store in Seoul with plywood modules for display and seating that reference the work of American artists Carl Andre and Donald Judd.

The studio was commissioned to create a Vans store inside local retailer and distributor Worksout‘s three-storey shop in Ryse Hotel in Seoul, which was also designed by Andrea Caputo.

An 180-square-metre section of the building’s ground floor has been turned into the Vans section, filled with plywood modules that can be combined in many different ways to create simple, adaptable interiors.

“The project is based on the analysis of a single module able to solve any sort of program,” studio founder Andrea Caputo told Dezeen.

“We made an investigation not just concerning dimensions and ideal proportions but also looking at the way founders of minimalism approached modularity in relationship with space,” said Caputo

“Donald Judd was as concerned about his artwork’s ratio as its proper setting in a specific context. It is a similar approach to that of Carl Andre and his combinations.”

Its interior was designed to be connected to the store’s surroundings.

“At the Vans area, we proposed an extra clear glass facade in order to connect the space to the street as much as possible,” said Caputo.

Inside, the studio demolished existing drywall to expose the concrete wall underneath.

Its rough-hewn texture contrasts with the large glazed front of the store and functions as a background to the plywood cubes that form display cases and benches.

“Vans is also a brand historically connected to young cultures, and plywood belongs to a generation very familiar with this aesthetics.”

Local artists Kwangho Lee and Chris Ro also contributed to the interior of the Vans store. Lee, who works with rope and textiles, created the black and white cover for the plywood benches, while Ro designed a screen-printed artwork that covers one of the walls.

“We tried to envision another neutrality for a gallery space conceived as white box: a raw context where walls are not even painted but left as they are found,” Caputo explained.

“We tried to avoid forms of permanent intervention,” he added. “Artworks by local creators such as Kwangho Lee and Chris Ro are part of the same transitory logic.”

Other recent projects in Seoul include minimalist micro apartments by Ian Lee and a mixed-use scheme by Henning Larsen that will feature a cluster of tower and timber buildings.

Photography is by Yong Joon Choi.