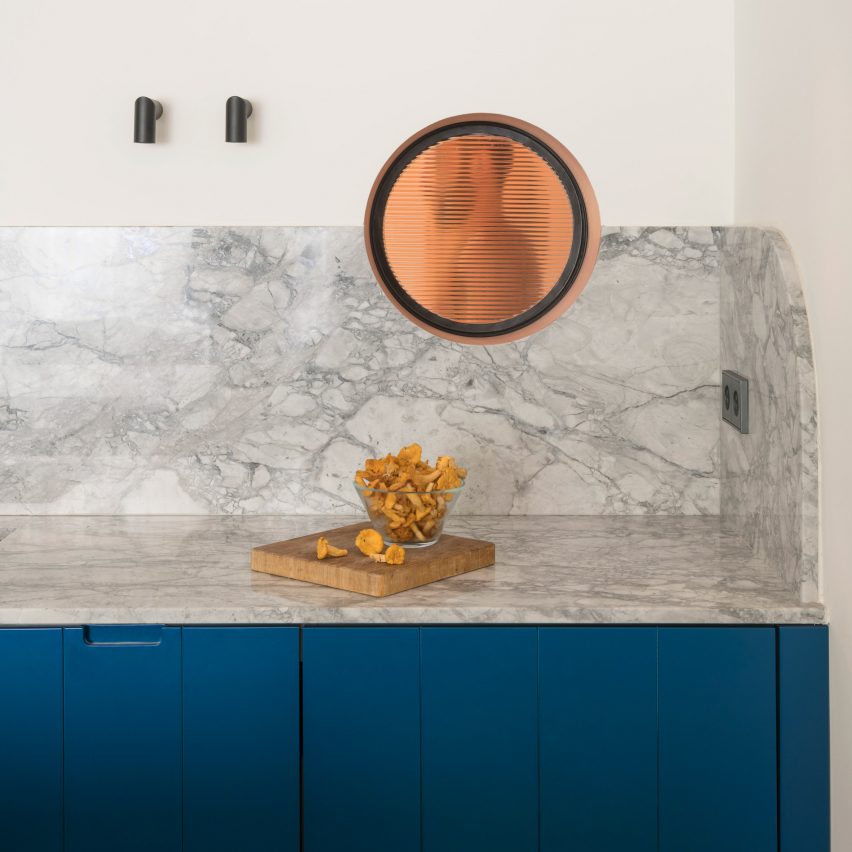 A porthole offers a cheeky view into the shower cubicle of this Barcelona apartment, which Colombo and Serboli Architecture has revamped for one of its founders. 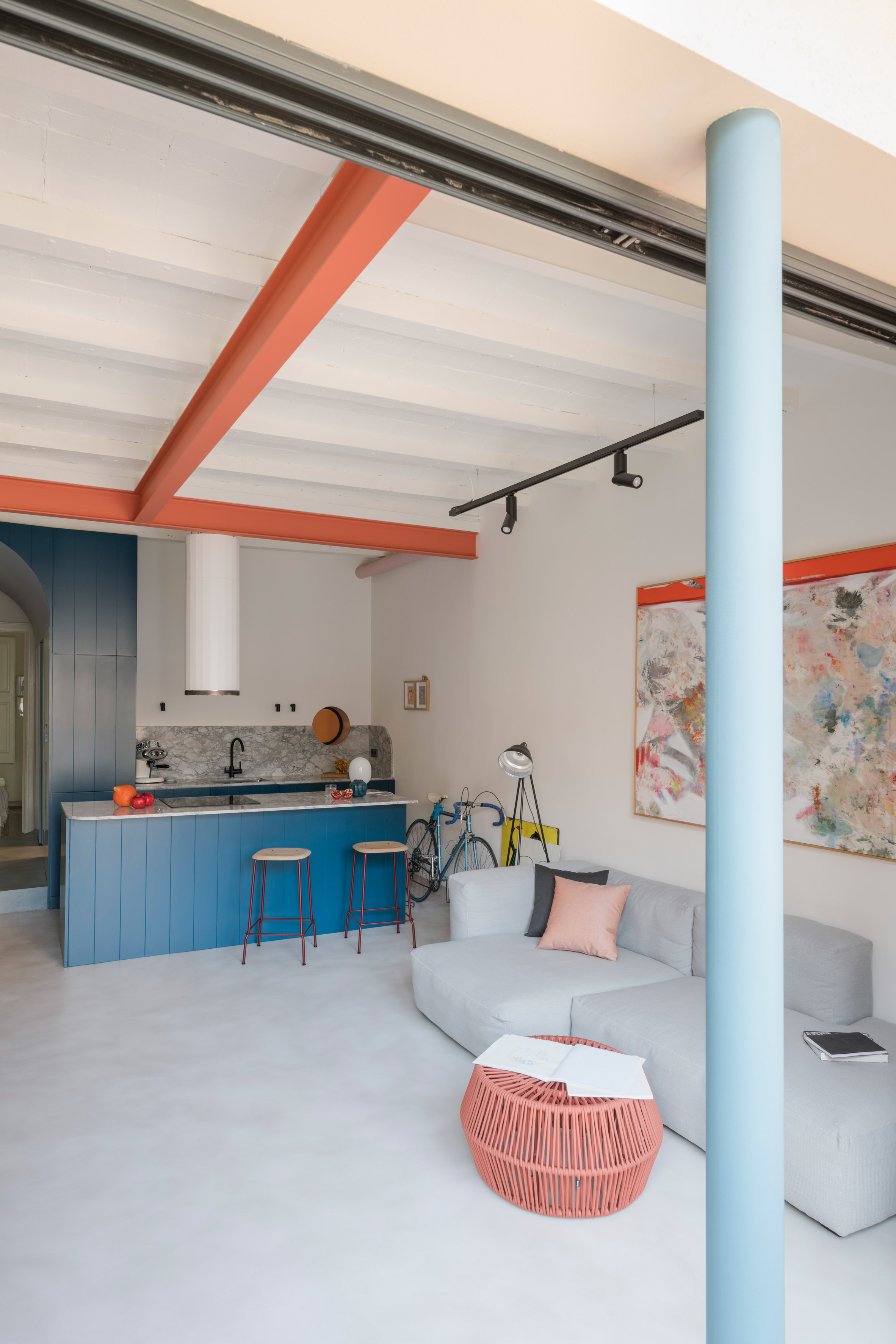 The Font 6 apartment is set within a 20th-century residential block close to Barcelona’s renowned Sagrada Familia church and belongs to Andrea Serboli – the co-founder of Colombo and Serboli Architecture.

Finished with white walls and cement floors, the 75-square-metre apartment serves as a simple backdrop to Serboli’s vast array of paintings and souvenirs gathered from trips abroad. 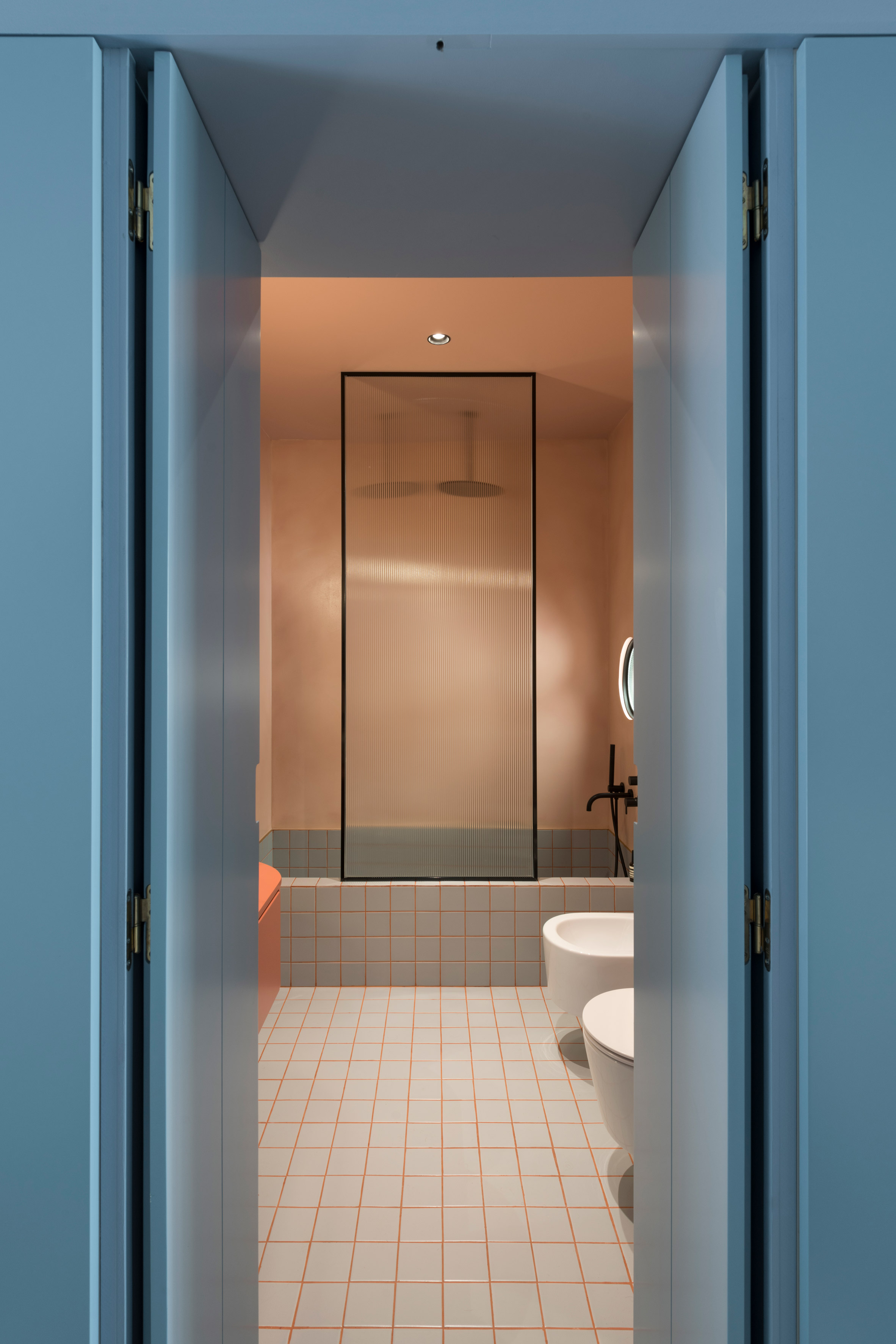 Upon purchase the home had been in a state of neglect, with many of its period features beyond repair. The architect was keen to transform it into a “quiet retreat full of emotionally charged objects”, loosely inspired by a wunderkammer – the German term for a cabinet of curiosities.

“It was the perfect opportunity to develop a sample of the firm’s style, and to find place for the great number of objects and memories that are part of [Serboli’s] collection,” the practice explained. 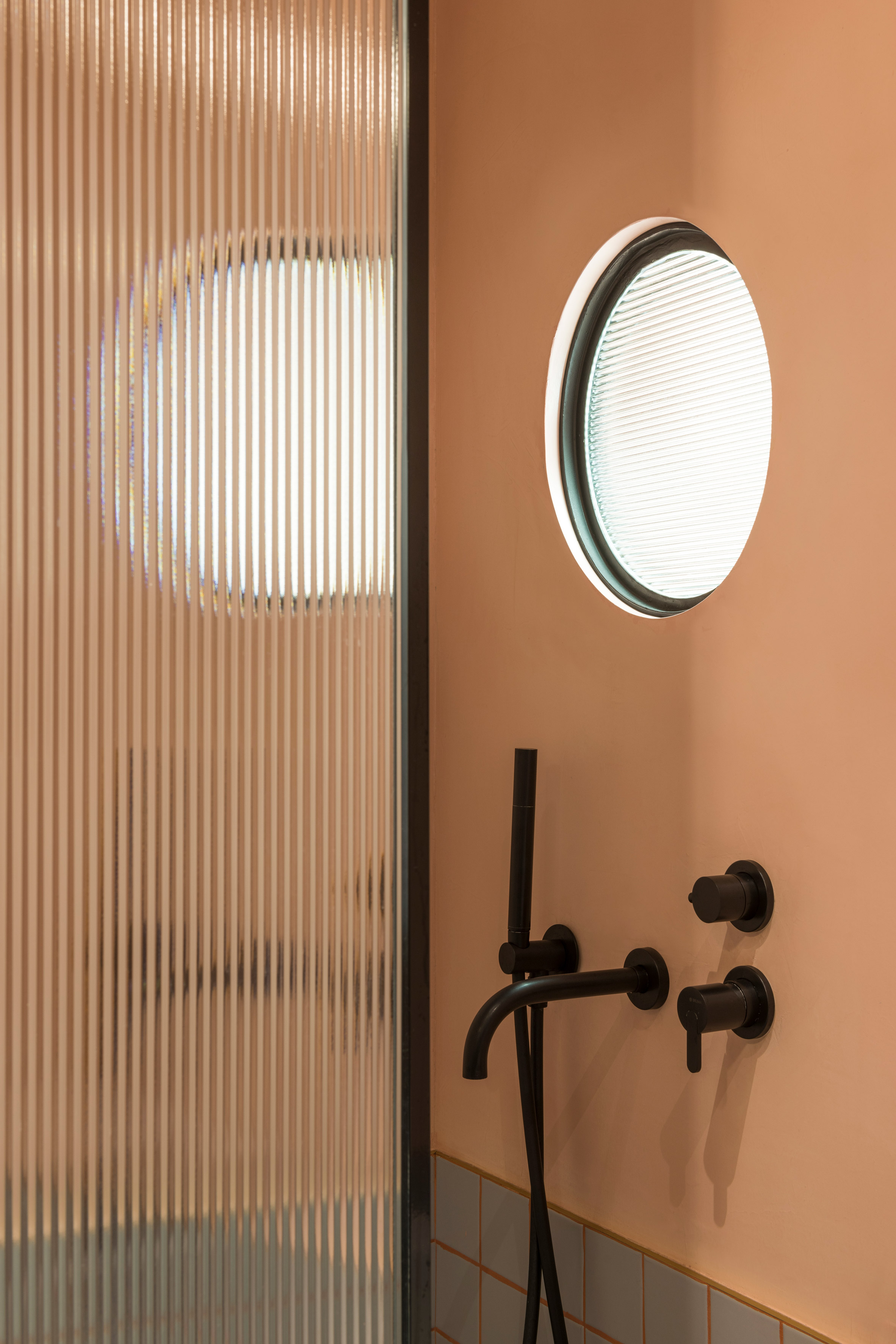 The focal point of the home, which was redesigned in collaboration with Margherita Serboli Arquitectura, is now the bathroom. The room sits inside a sea-blue timber volume that the practices constructed at the centre of the apartment’s floor plan.

A circular opening, covered with fluted glass, has been cut into the wall of the shower cubicle, looking through into the main living area. 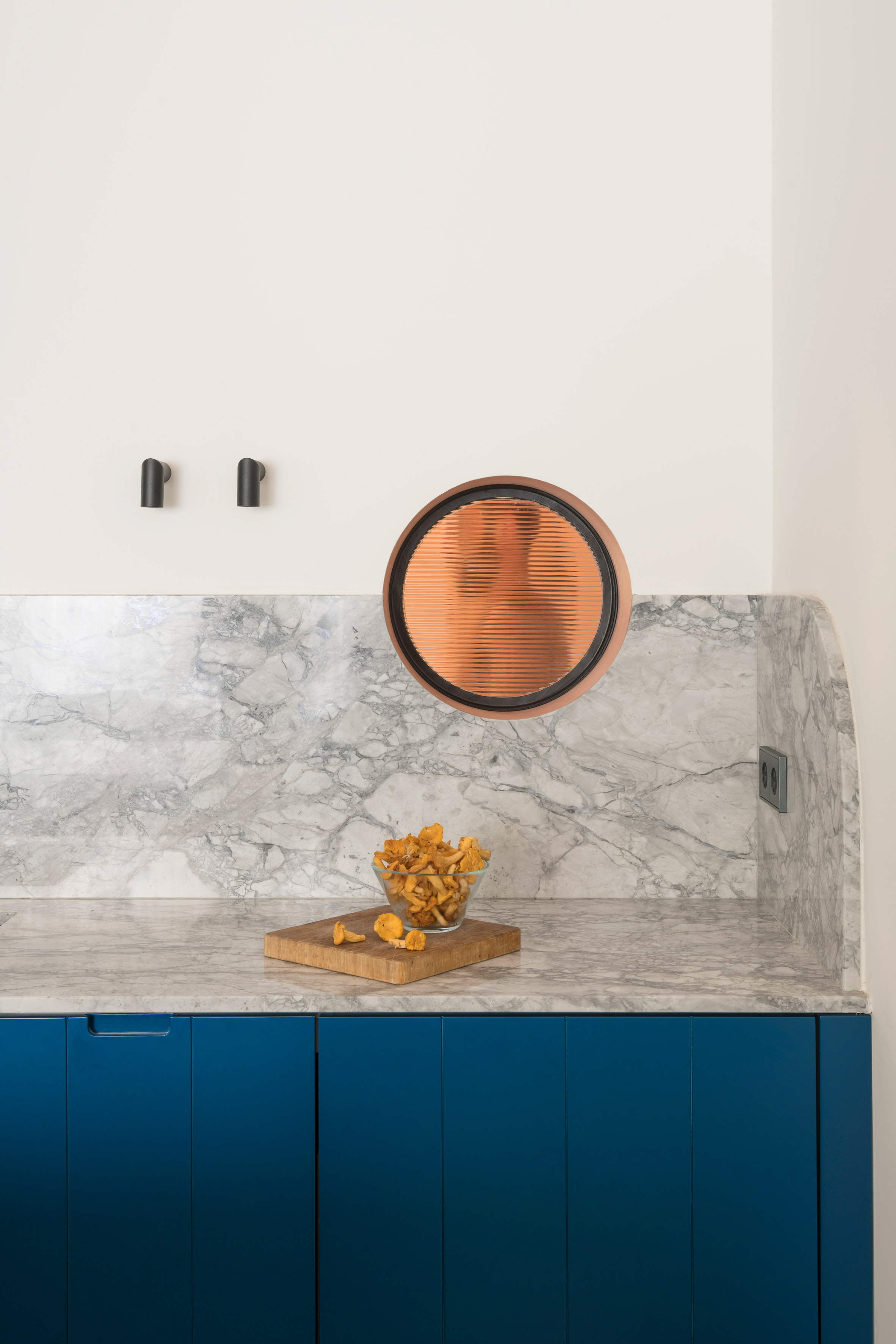 “It is the sancta sanctorum of the entire apartment, its entrance hidden and camouflaged between the doors of the closets,” added the practice. 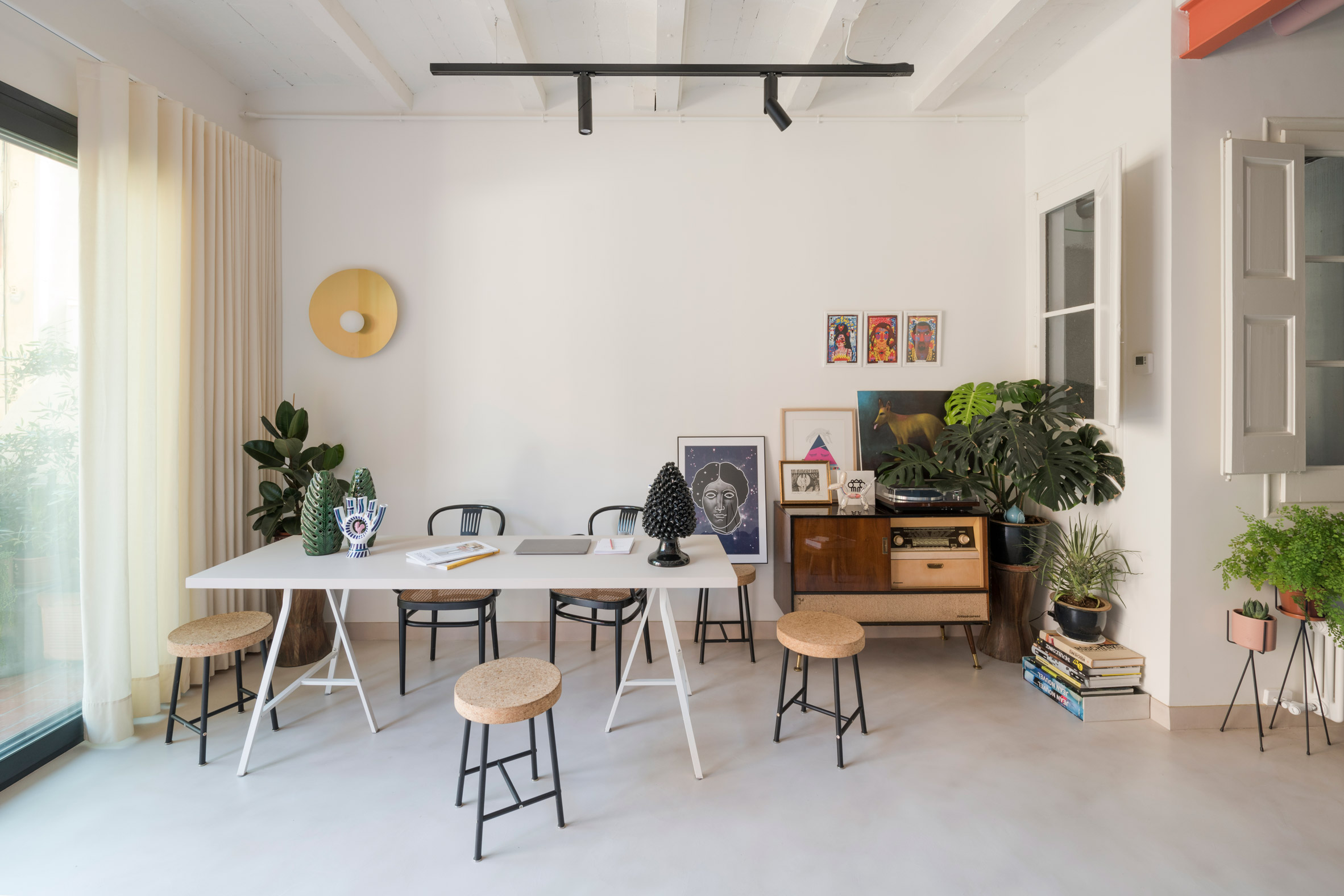 Cupboards have also been integrated into the wooden blue volume to form storage in the adjacent kitchen, which features a grey marble splashback and breakfast island counter.

A further pop of colour is provided by a coral support beam that has been inserted underneath the existing Catalan ceiling vaults.

Partition walls have been knocked through to form an open-plan living area, which is dressed with a chunky sofa from Hay and vintage dining chairs that Serboli selected for their close resemblance to chairs by classic German furniture brand Thonet.

“Precious materials are combined with more basic elements to generate a feeling of affordable luxury – not ostentatious – which can be seen in [the apartment’s] everyday details,” explained the practice.

The architects have also created a larger French window to give better access to a greenery-filled balcony. 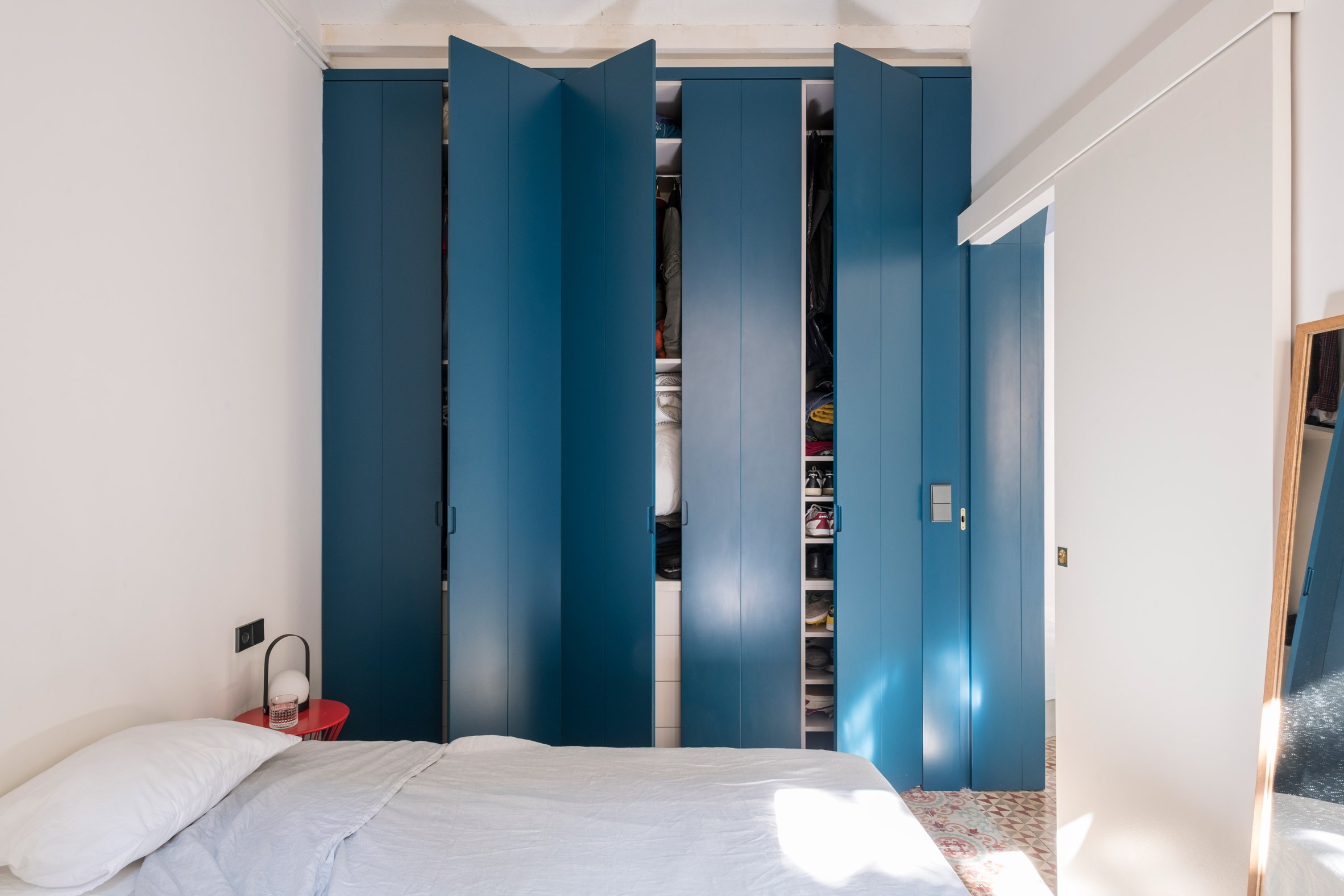 An arced doorway leads to two bedrooms that sit at the rear of the apartment, which are finished in the same decor style. One of them features full-height blue wardrobes, echoing the cabinetry in the kitchen.

Colombo and Serboli aren’t the only practice that has opted to keep the wet rooms of a home on view – interior designer Eliat Dar erected a glass wall to separate the kitchen and bathroom of a small apartment in Jaffa, Israel.