This south London house extension by Studio Octopi features a pre-cast concrete staircase that had to be craned into position.

London-based Studio Octopi designed the zinc-clad basement extension for a four-bedroom terraced property in Wandsworth, to provide the owners with a guest bedroom, a shower room, a utility room and a playroom. 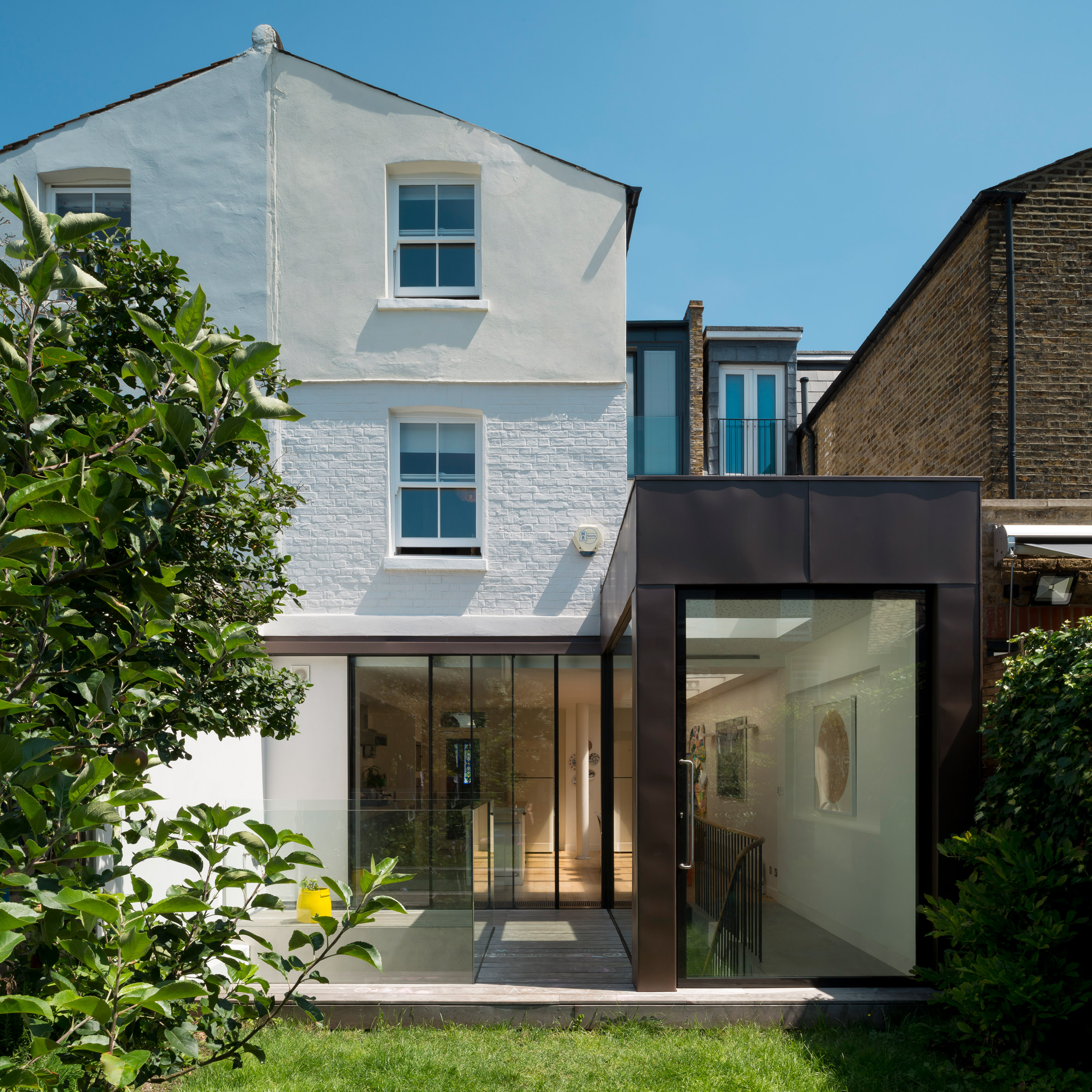 The original building is typical of Victorian and Edwardian properties constructed in compact terraces throughout the area, which are commonly extended downwards to retain use of the small gardens.

The design solution needed to offer a strong connection with the existing house and ensure natural light reaches the new basement spaces, which was achieved by the introduction of a pair of lightwells at the front and rear of the building. 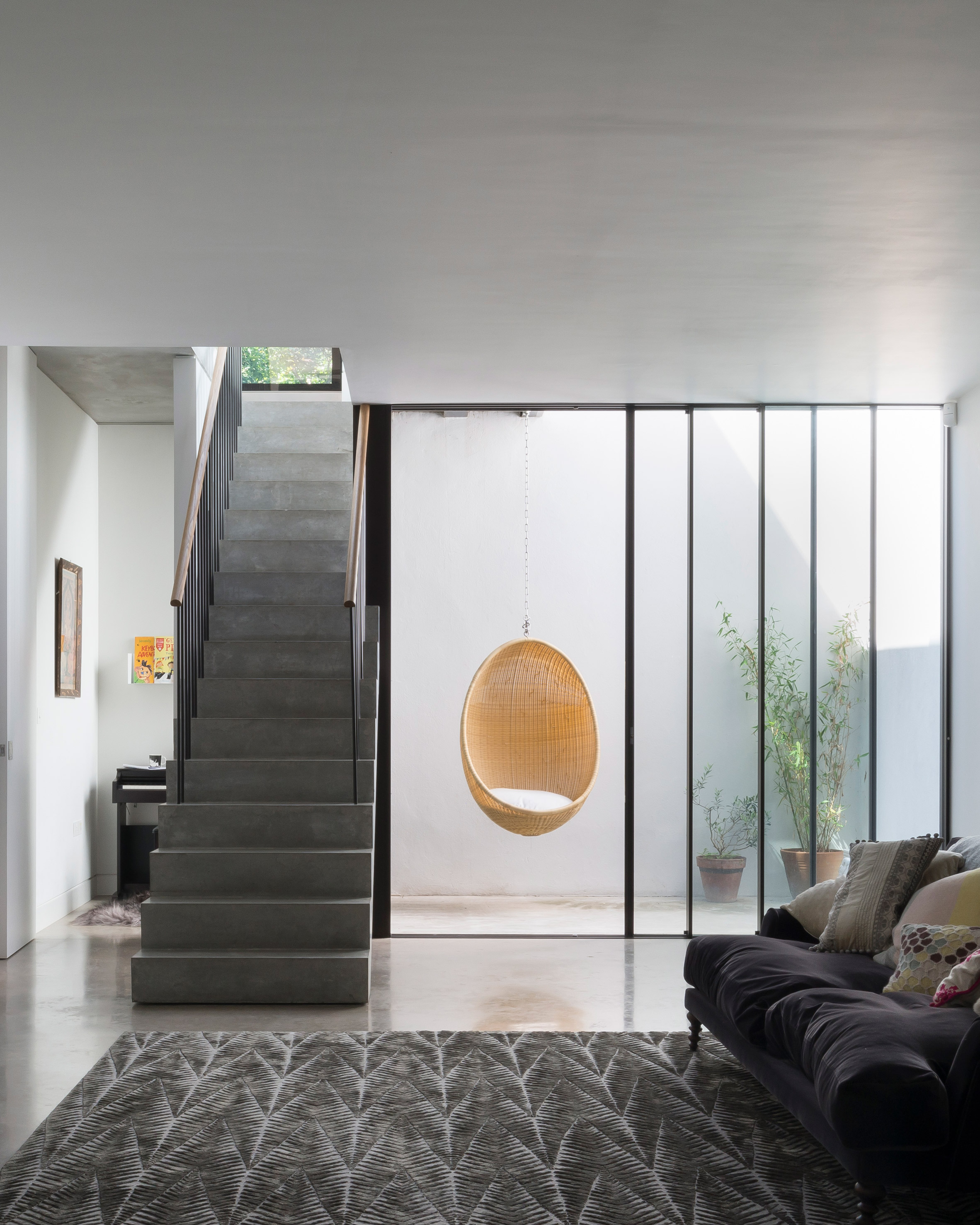 Rather than connecting the levels with a centrally located lightless lobby, the studio enclosed the staircase in a glazed extension at the rear that allows daylight to filter down to the lower level.

“The new basement avoids the usual pitfalls of typical residential basement extensions,” said Studio Octopi. “There are no dark lobbies or dead ends, more of a sense of openness, high ceilings and connections with the outside.” 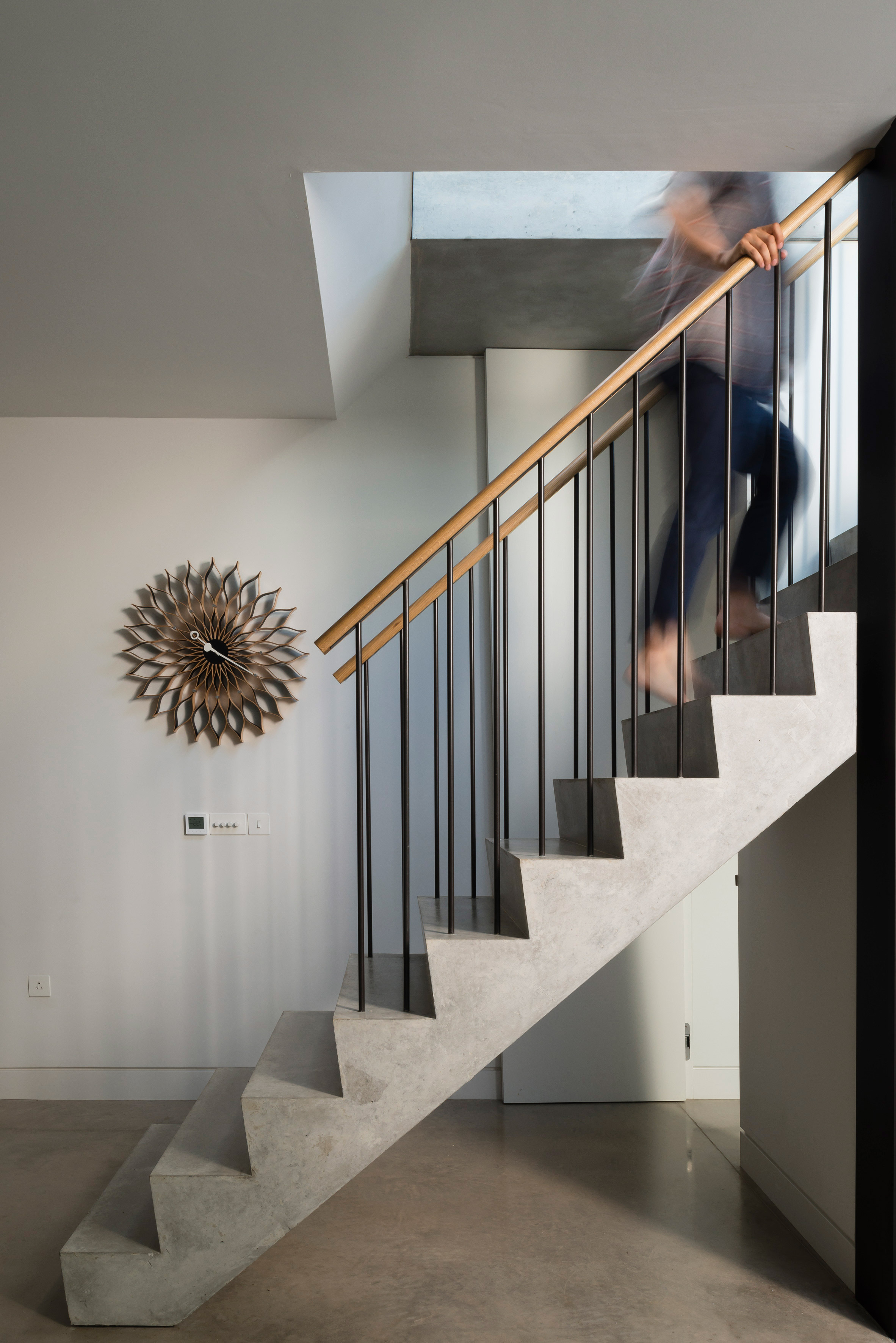 The basement extends under the full footprint of the house, with the extension and light wells positioned outside the building line of the existing property.

The new staircase is located next to the kitchen, creating a direct connection between these spaces, as well as between the basement and the garden, which can be reached through a glazed pivot door at the top of the stairs. 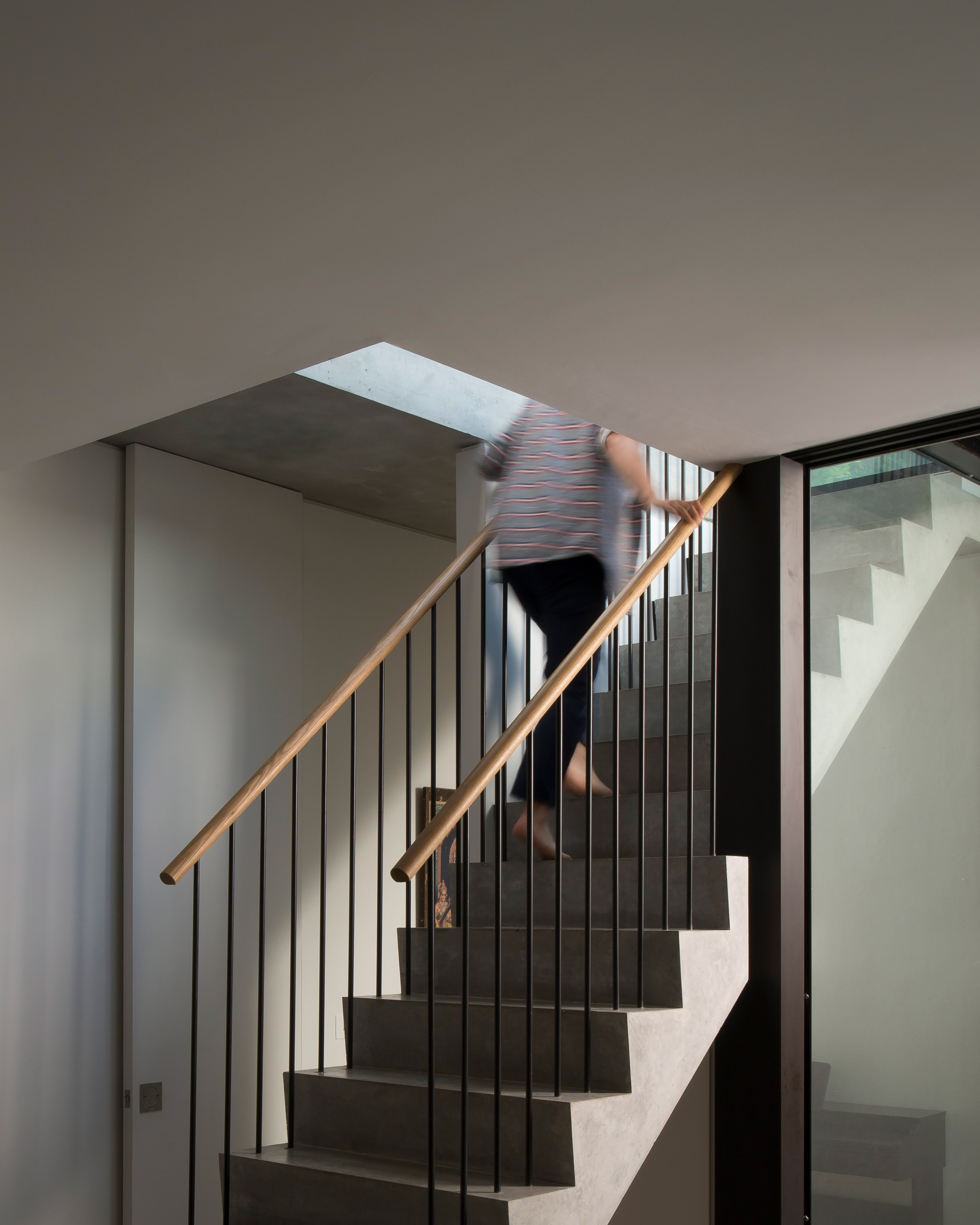 Sliding glass doors also connect the kitchen with a decked area outside, which incorporates a bridge that extends between the stair extension and the light well to reach the garden.

The extension is clad in bronze-coloured zinc and is topped with a living roof. It features an acoustic ceiling that reduces noise transfer between the kitchen and basement. 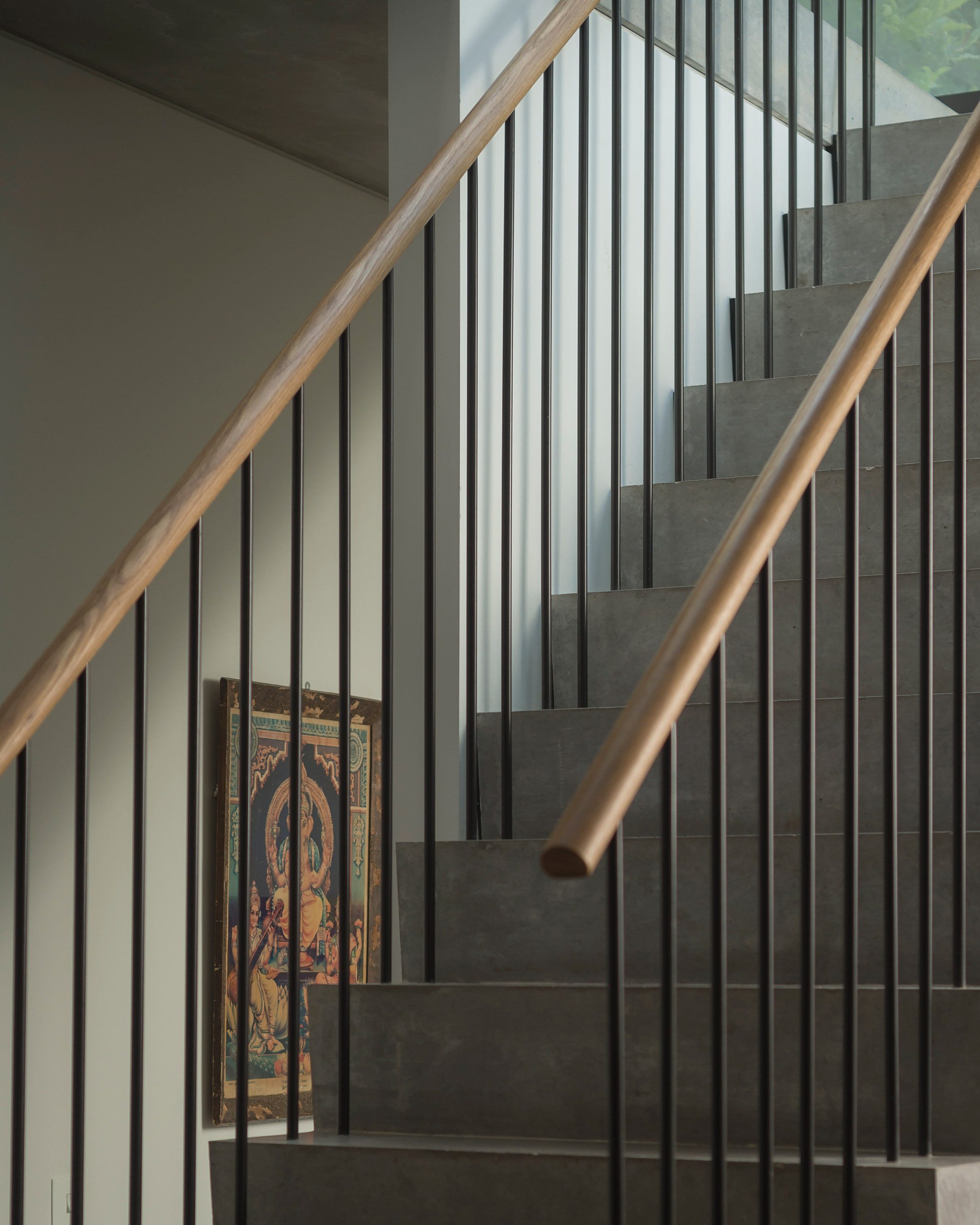 The staircase drops down into a playroom, with the rear light well providing a courtyard that can be accessed through sliding doors lining this space. A music room for piano practise is accommodated on the other side of the stairs.

To avoid complicating the scheduling of the building works, the staircase was pre-cast and craned over the building, before being manoeuvred into place through a gap between an existing column supporting the rear of the house and the party wall. 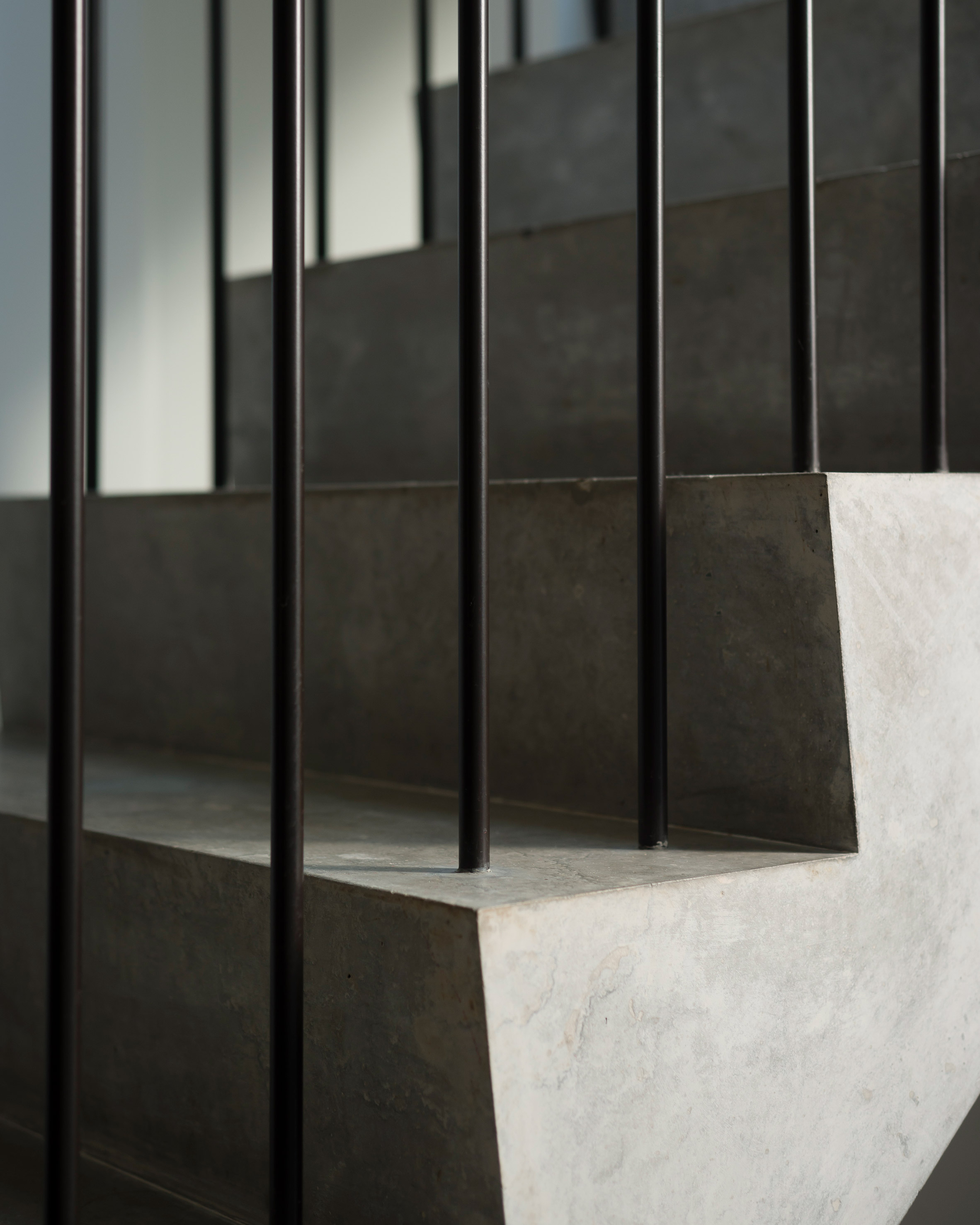 “The house was in occupation throughout the project – three kids under 10 years old! – which was a challenge for everyone particularly when all the glazing and tonnes of concrete are being hoisted over the house,” studio co-founder Chris Romer-Lee told Dezeen.

“It was quickly established that for sequencing reasons the stair would have to be pre cast. In situ would impact on the programme and likely make the glazed areas even harder to install.” 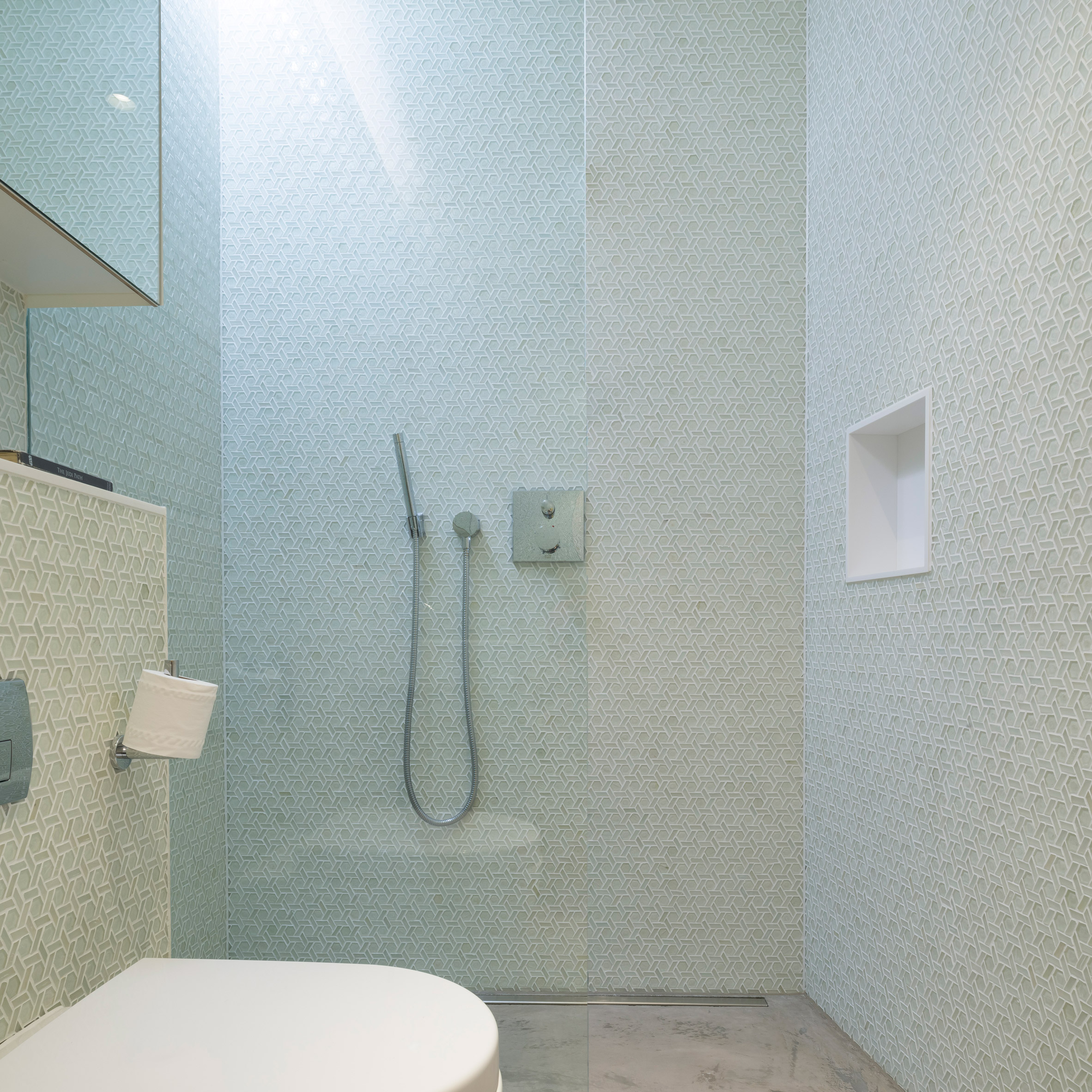 The shape of the stair is notched so it slots around the existing column. It features a handrail that extends out from the column and terminates several steps above the level of the polished-concrete floor.

A corridor, formed by angled walls that enclose the utility room and shower room on opposite sides, leads from the playroom through to the guest room at the front of the house. 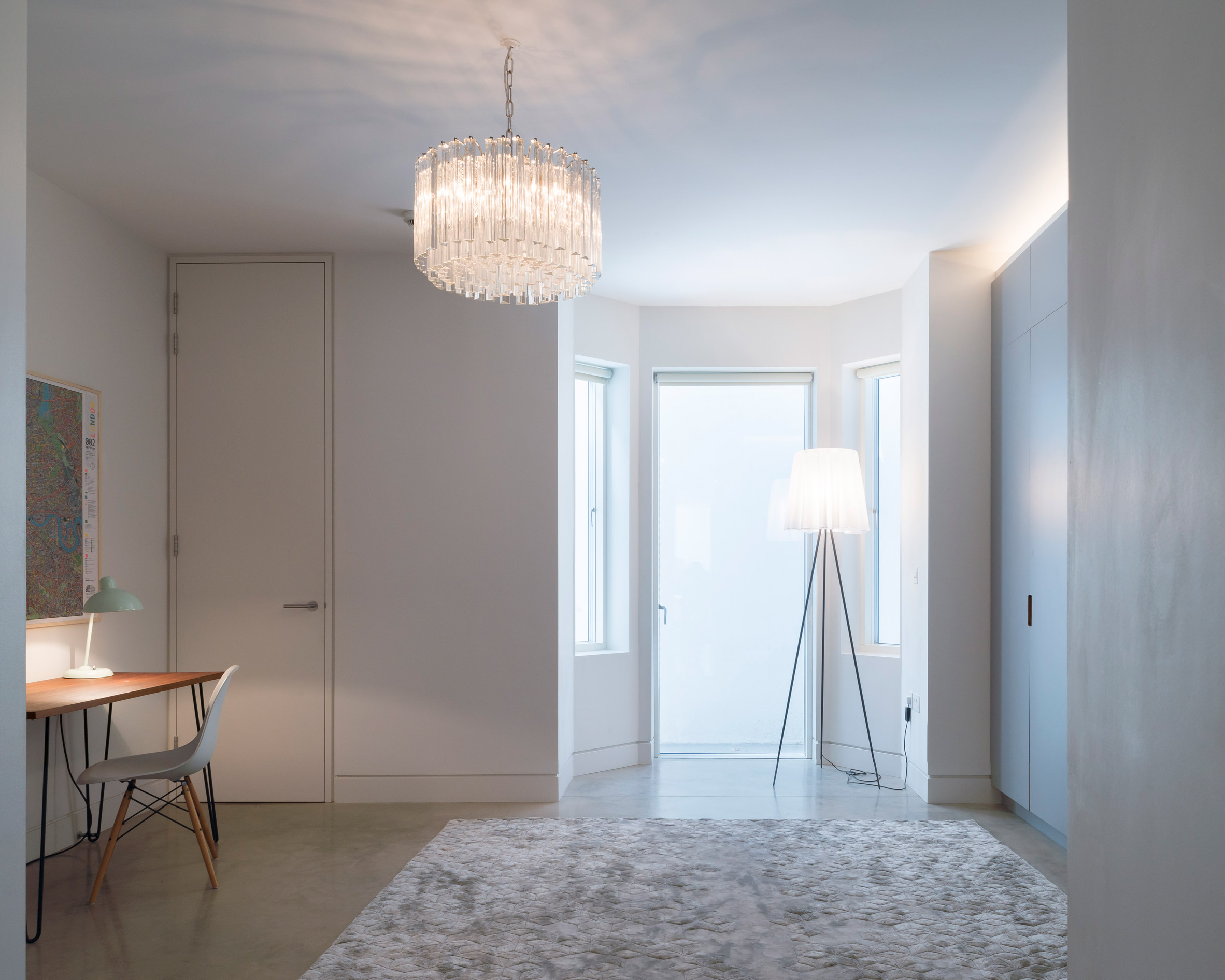 The guest room receives daylight from a bay window with a door that opens onto the second lightwell. A fold-down bed is incorporated into its laminated plywood wall.

A consistent material palette based around the polished-concrete flooring and materials in shades of grey emphasises the seamless connection between the spaces on both levels. 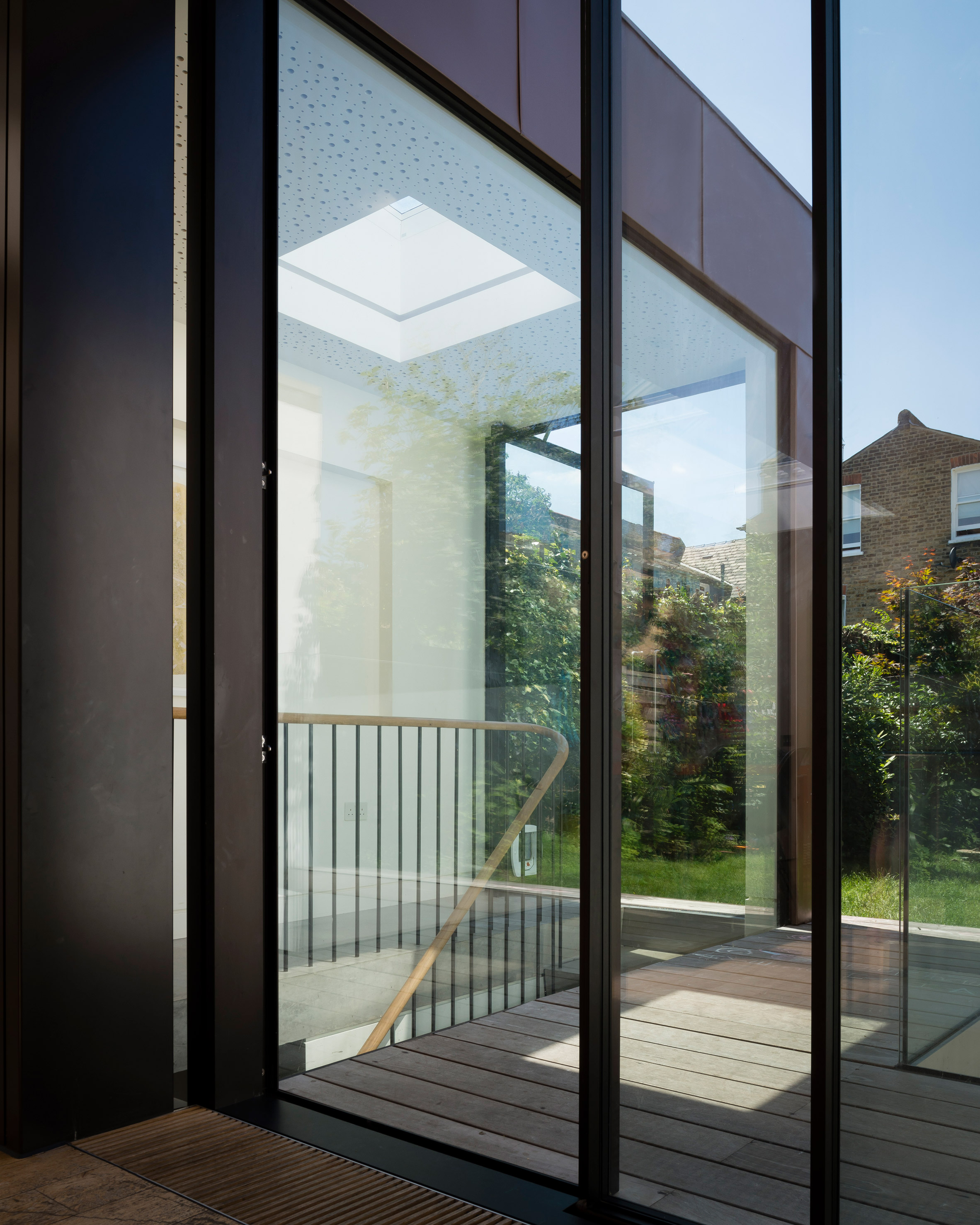 Studio Octopi was established in 2003 by James Lowe and Romer-Lee. The practice works across many sectors on projects as diverse as a proposal for a floating swimming pool in the River Thames and the restoration of a traditional amphitheatre at a college in the south of England.

The studio’s residential work has included adding an extension featuring a three-storey-high window to a terraced house in north London, and creating a plywood-lined loft extension to a professor’s house in Battersea.