The Spanish architecture practice‘s modular design means the stadium can be dismantled and moved to a new location after the football tournament.

Repurposed steel containers will be arranged in an “elegant curved square” and each will be modified to contain elements of the 40,000-seat stadium, including removable seats, concession stands and bathrooms. 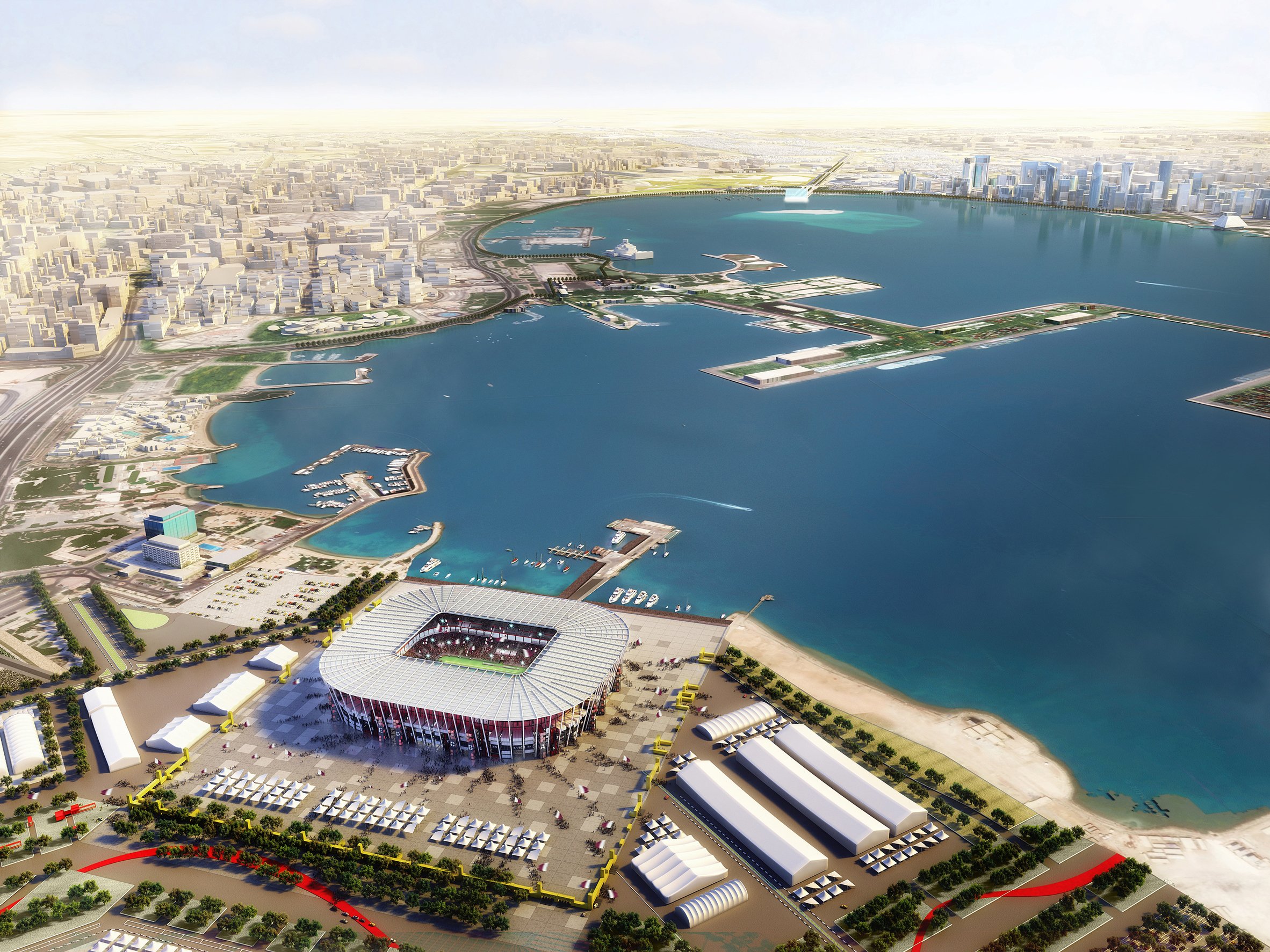 The venue is designed to be can be effectively recycled after the 2022 FIFA World Cup, either by being moved to a new location to host future games or repurposed into several smaller sports and cultural venues.

“We are confident that this innovative and sustainable concept will be an inspiration for stadium developers and architects around the world, capable of creating aesthetically pleasing venues that offer new legacy possibilities,” said Fenwick Iribarren Architects co-founder Mark Fenwick. 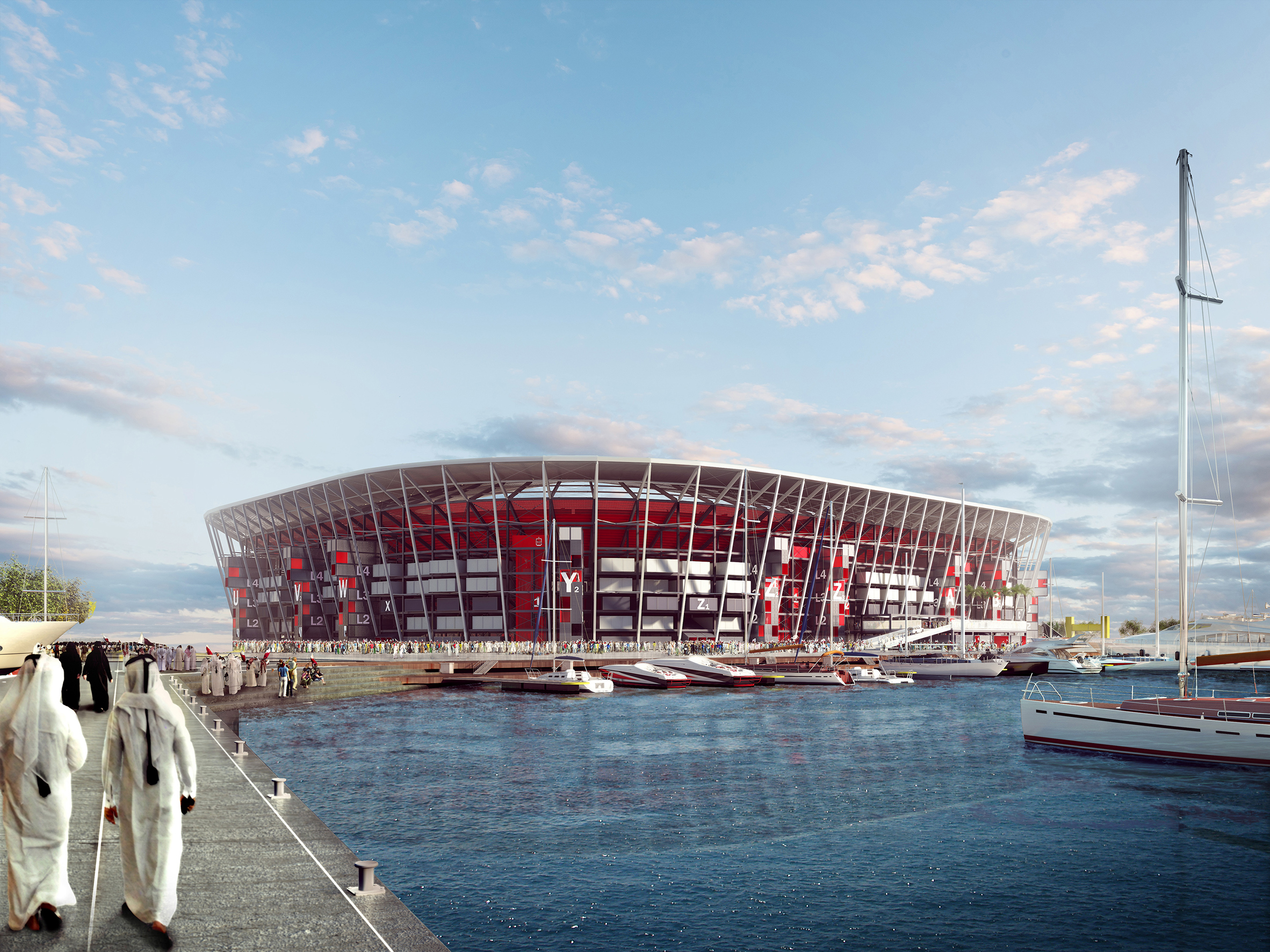 “Qatar is delivering superb results in terms of sustainability and innovation, including the proposed design for Ras Abu Aboud Stadium,” said Federico Addiechi, head of corporate social responsibility at FIFA.

All of the infrastructure for the World Cup has to meet Global Sustainability Assessment System (GSAS) criteria. GSAS rates green building and infrastructure across the Middle East and North Africa.

Architects have been proposing the application of shipping containers for a wide range of architectural projects. James Whitaker’s concept for a house in the California desert comprised splayed cargo containers, whilst in New York LOT-EK made a family home from sliced and stacked shipping containers.

Other designs re-using the freight boxes include swimming pools and hot-tubs, a transportable farm and a pop-up cinema. 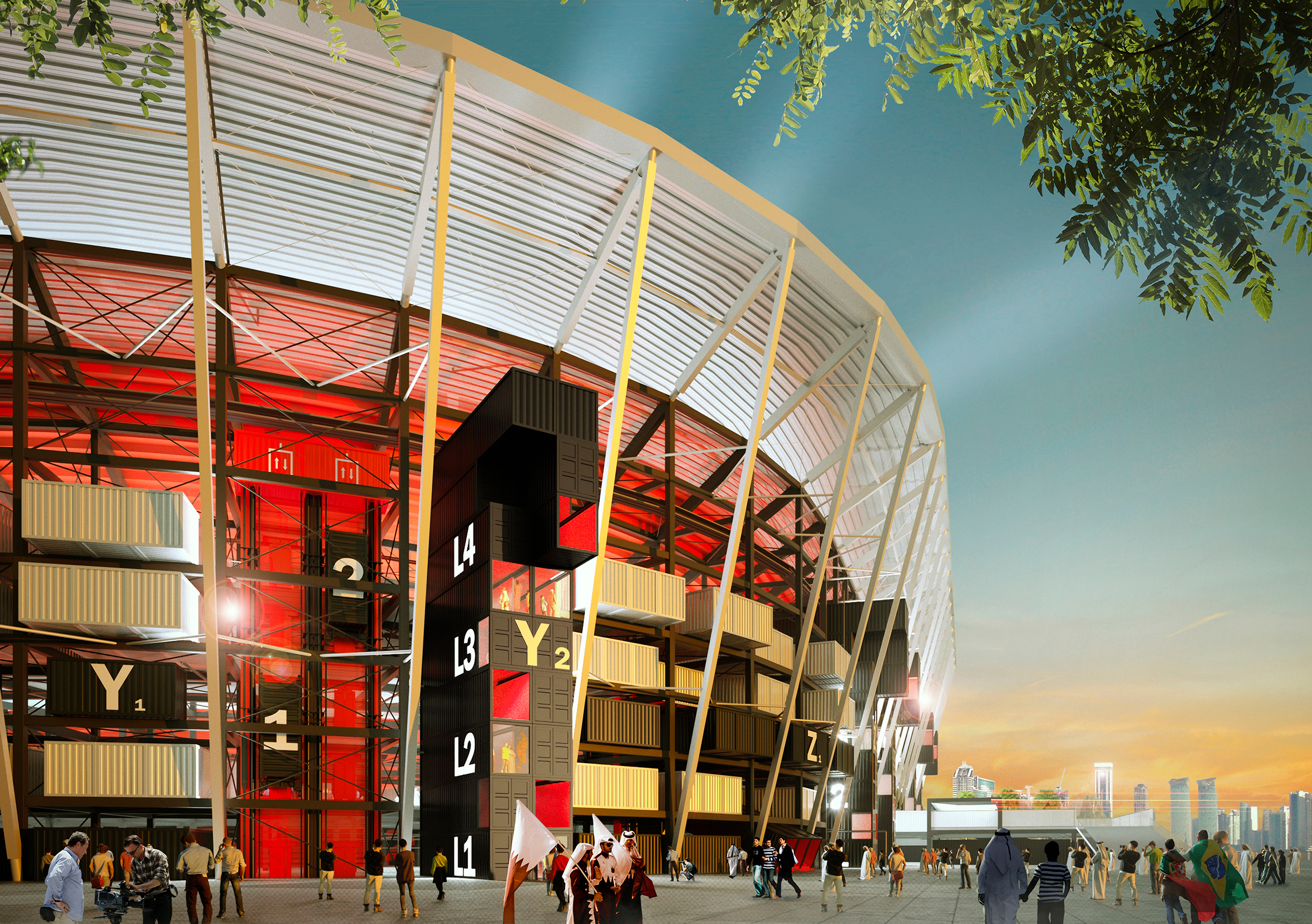 The Ras Abu Aboud Stadium is located on the waterfront of the downtown West Bay area with views of the Corniche, Doha’s landmark 7 kilometre-long promenade development. Jean Nouvel’s National Museum of Qatar is currently nearing completion at the southern tip of the Corniche.

Due to complete in 2020, the Ras Abu Aboud Stadium is one of eight proposed host venues for the 2022 games. 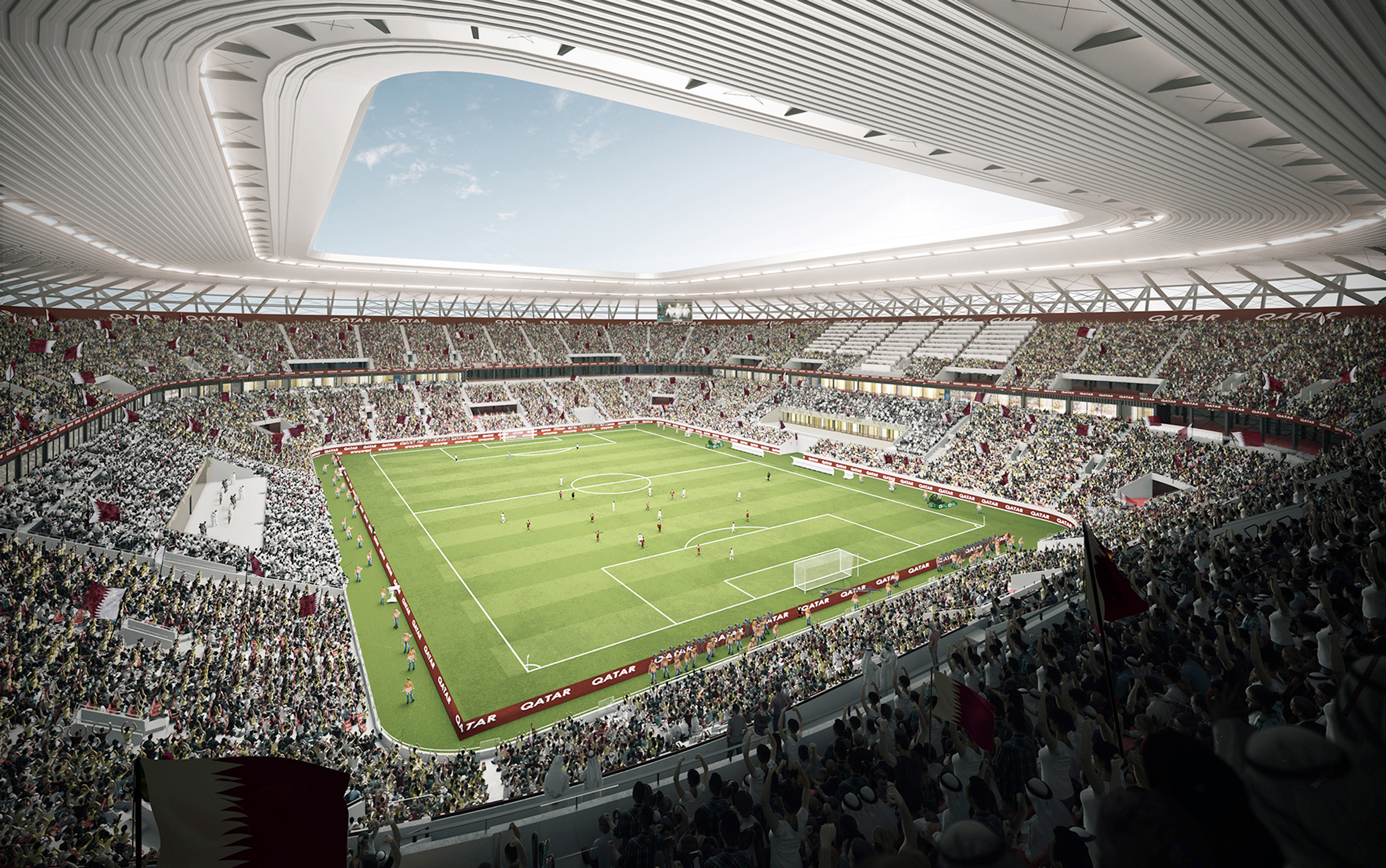 Other stadiums for the 2022 FIFA World Cup Qatar include the Al Thumama Stadium by Qatari architect Ibrahim M Jaidah. The circular stadium with a white diamond-patterned exterior resembles a traditional knitted cap worn by men in the region.

Foster + Partners won the contract to design the Lusail Stadium, which will host the opening and closing ceremonies. No plans for the new design have been released yet, but it is reported the stadium will have a custom cooling system to keep its interior at a pleasant 26 degrees Celsius. 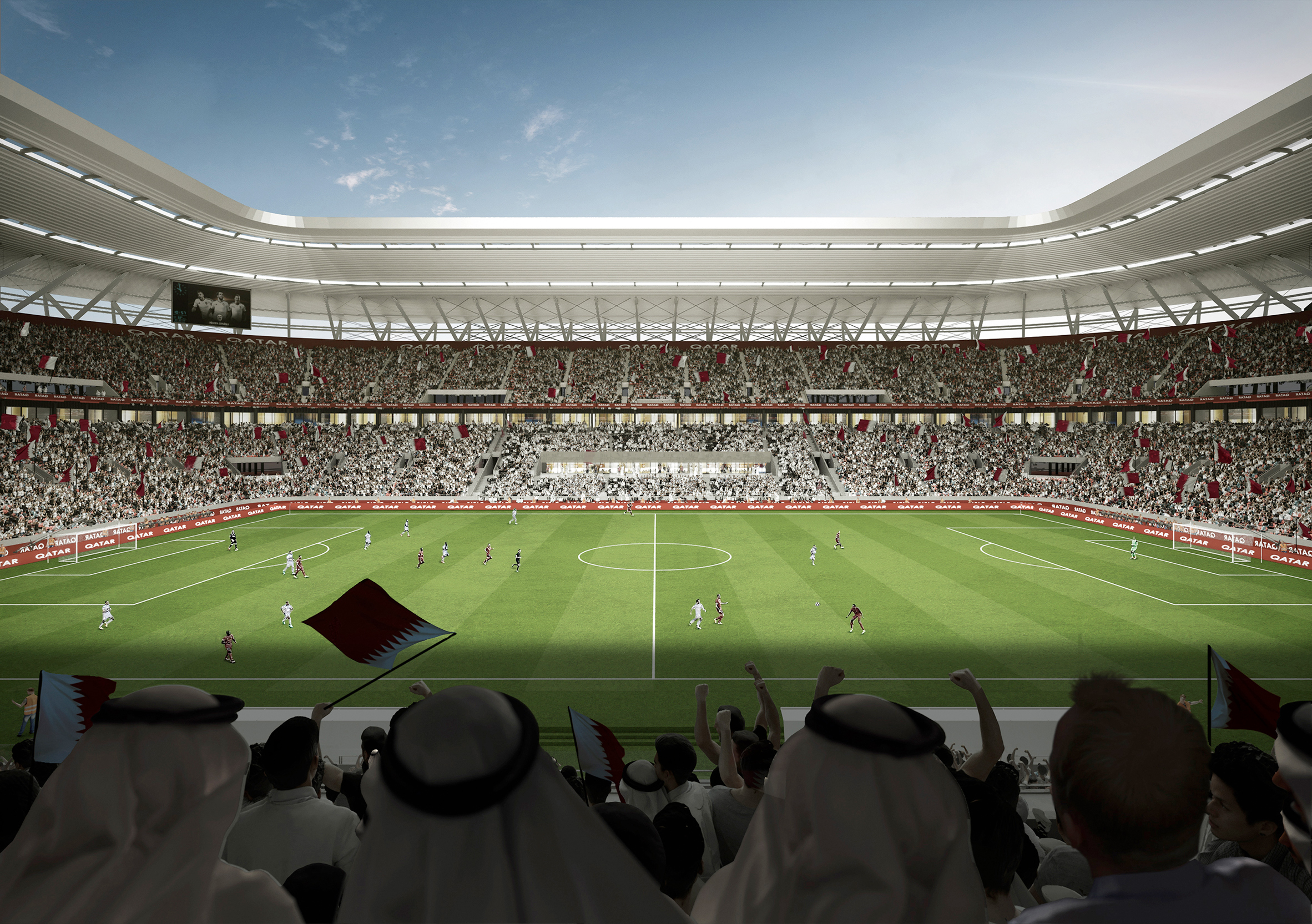 The Al Wakrah stadium, designed by the late Zaha Hadid and inspired by a traditional Qatari dhow boat, caused a commotion when critics pointed out the design resembled labia. In an interview with TIME magazine Hadid hit back at the “ridiculous” and “embarrassing” claim, saying not “everything with a hole in it is a vagina”.

In 2015 Hadid walked out of a BBC radio interview live on air when questioned over the alleged deaths of migrant workers on the Qatar stadium. Hadid had previously said that protecting workers on the Al Wakrah stadium was “not my duty as an architect”. 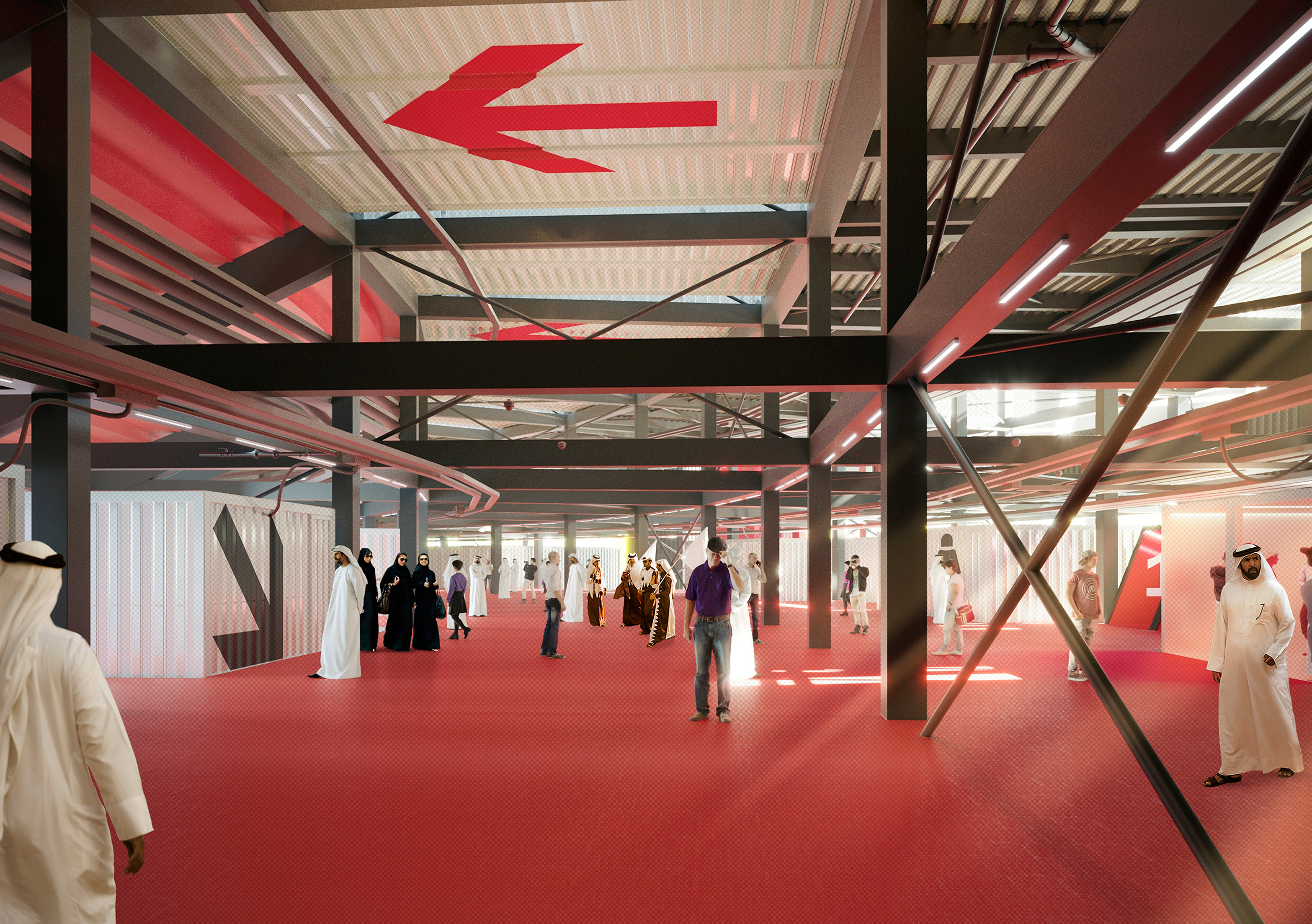 The stadium and infrastructure construction projects around the 2022 FIFA World Cup have been dogged by human rights abuses claims, including migrant worker deaths caused by unsafe conditions and reports of modern slave labour systems.

In a statement, Qatar’s Supreme Committee (SC) responsible for delivering the Ras Abu Aboud Stadium said that every contractor engaged on a World Cup project is obliged to follow their contractually binding Workers’ Welfare Standards. 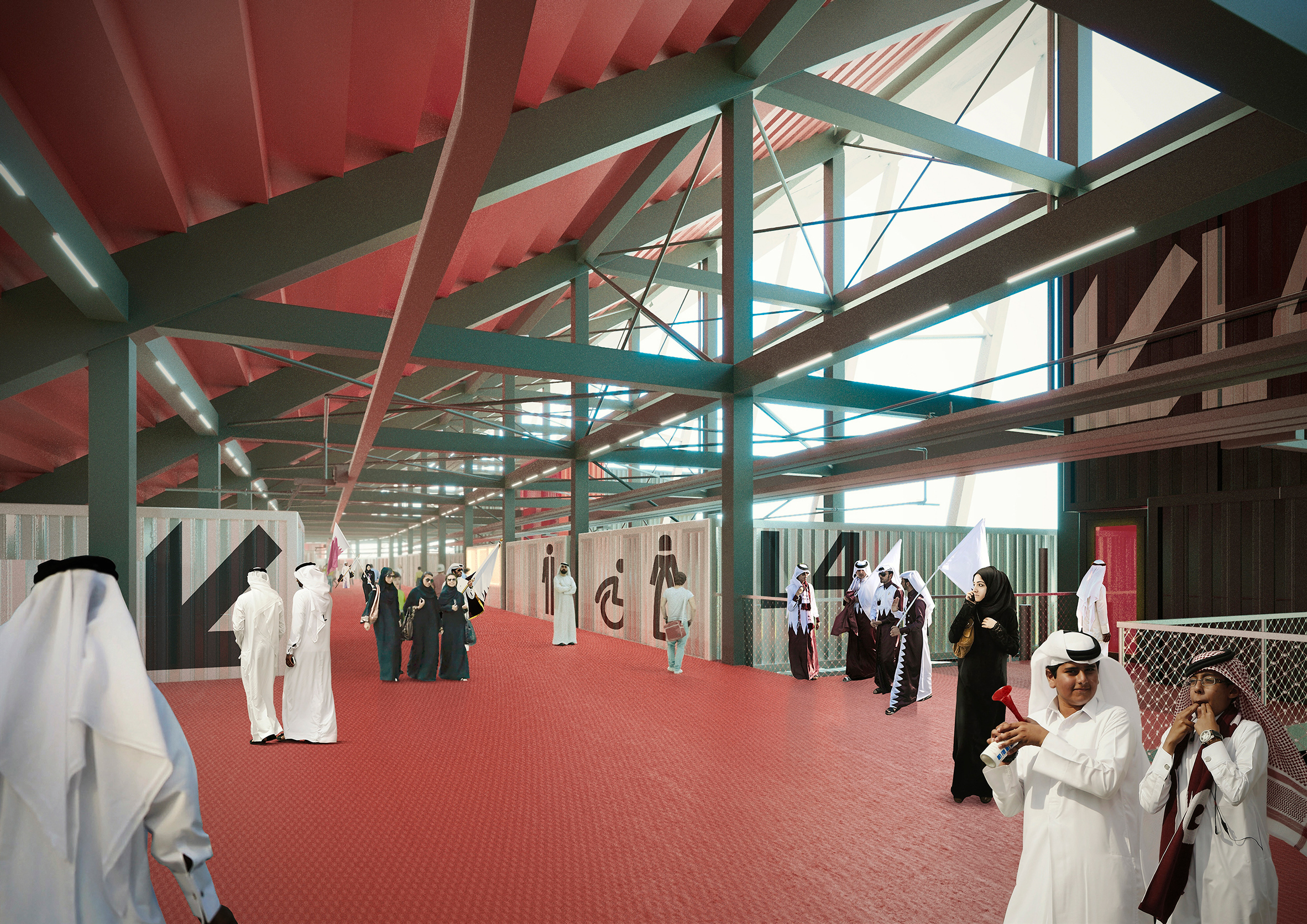 “The standards clearly set out the SC’s requirements regarding the recruitment, employment, living and working conditions for everyone engaged on an SC project,” read the statement.

“We hold ourselves and our partners accountable to our Workers’ Welfare Standards, regularly monitoring adherence to them, and we immediately address any cases where a party falls short.”

The post Qatar’s shipping container football stadium can be taken apart and reassembled after the match appeared first on Dezeen.