Earth, clay and gravel are compressed to form the walls of this observation tower designed by De Gouden Liniaal Architecten to offer views of a nature reserve spanning the Belgian-Dutch border. 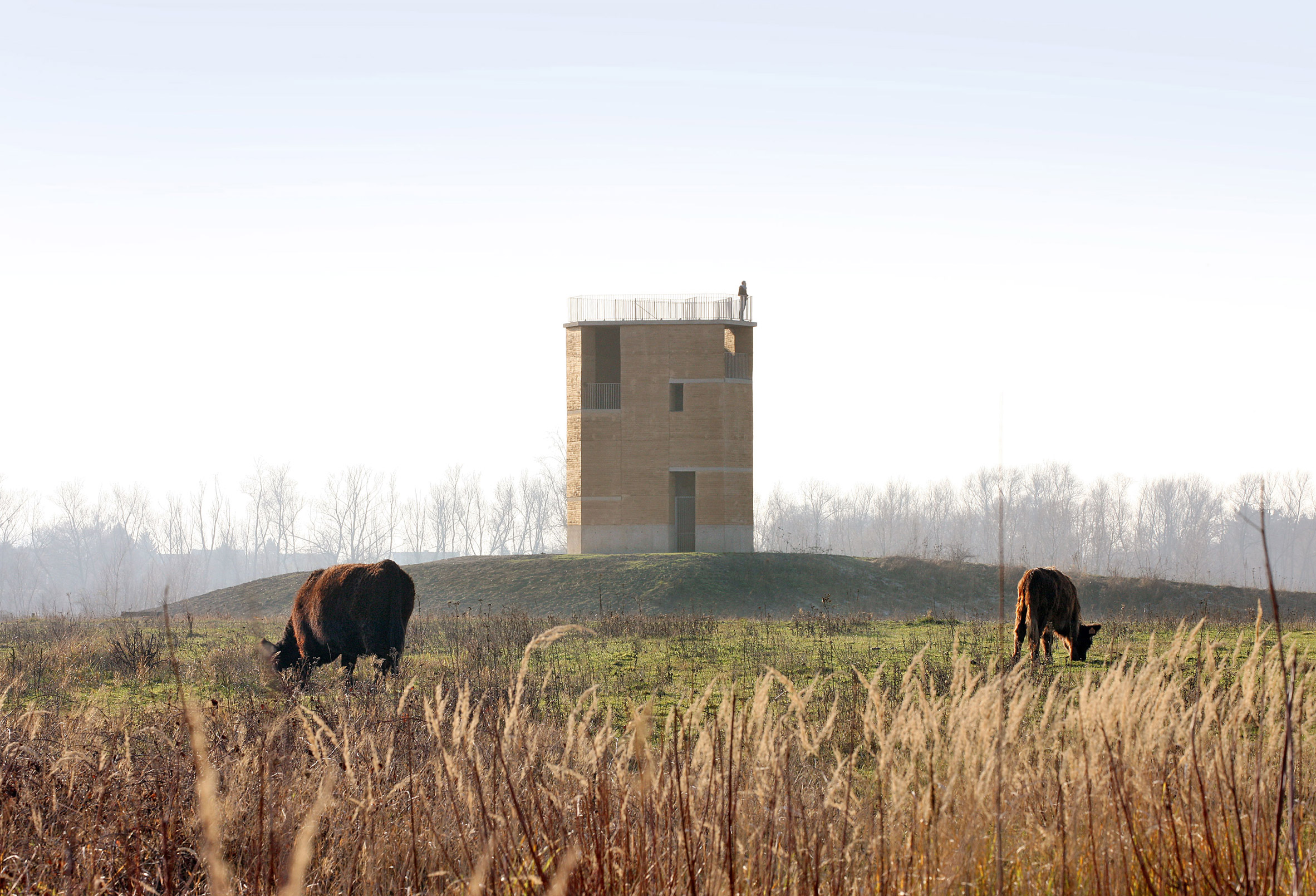 The rammed-earth tower designed by the Genk-based studio is located within a former gravel quarry called Negenoord, which has been transformed to form part of the 2,500-hectare Maas Valley River Park.

The park follows the River Maas, which forms the border along a 40 kilometre stretch from Maastricht in the Netherlands to Kessenich in Belgium.

A department within the Belgian government responsible for repurposing quarries commissioned the tower as a focal point for the regeneration of the area into a natural landscape offering educational and recreational facilities. 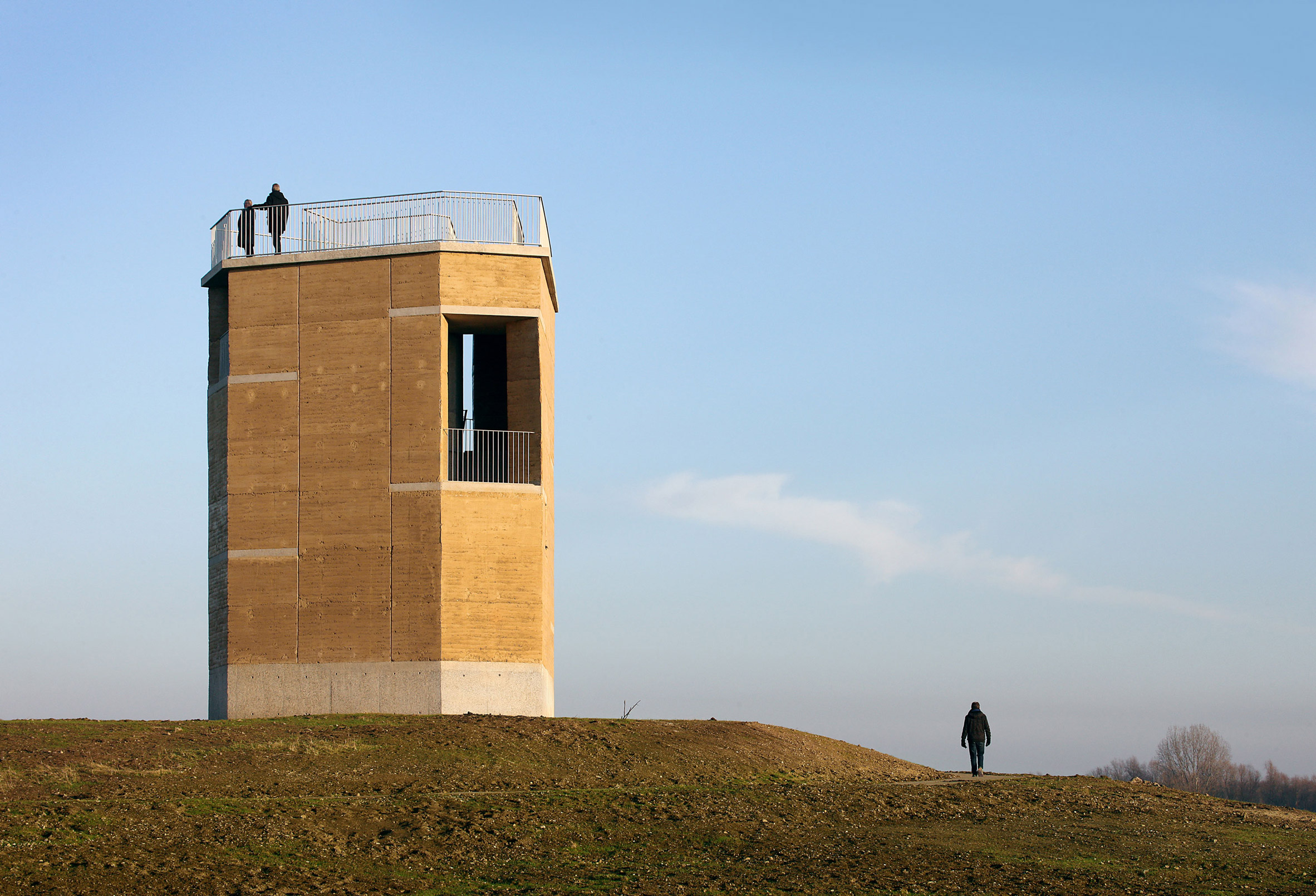 The 12-metre-tall tower was built on a small hill that protects it from potential flooding and offers the best vantage point from which to take in the surrounding landscape.

The building’s plan resembles a triangle with the corners removed to create a six-sided shape punctuated with openings that frame the best available views.

At the centre of the tower is a concrete core incorporating stairs that ascend to three landings on the upper levels, before emerging onto a rooftop terrace lined with a metal balcony. 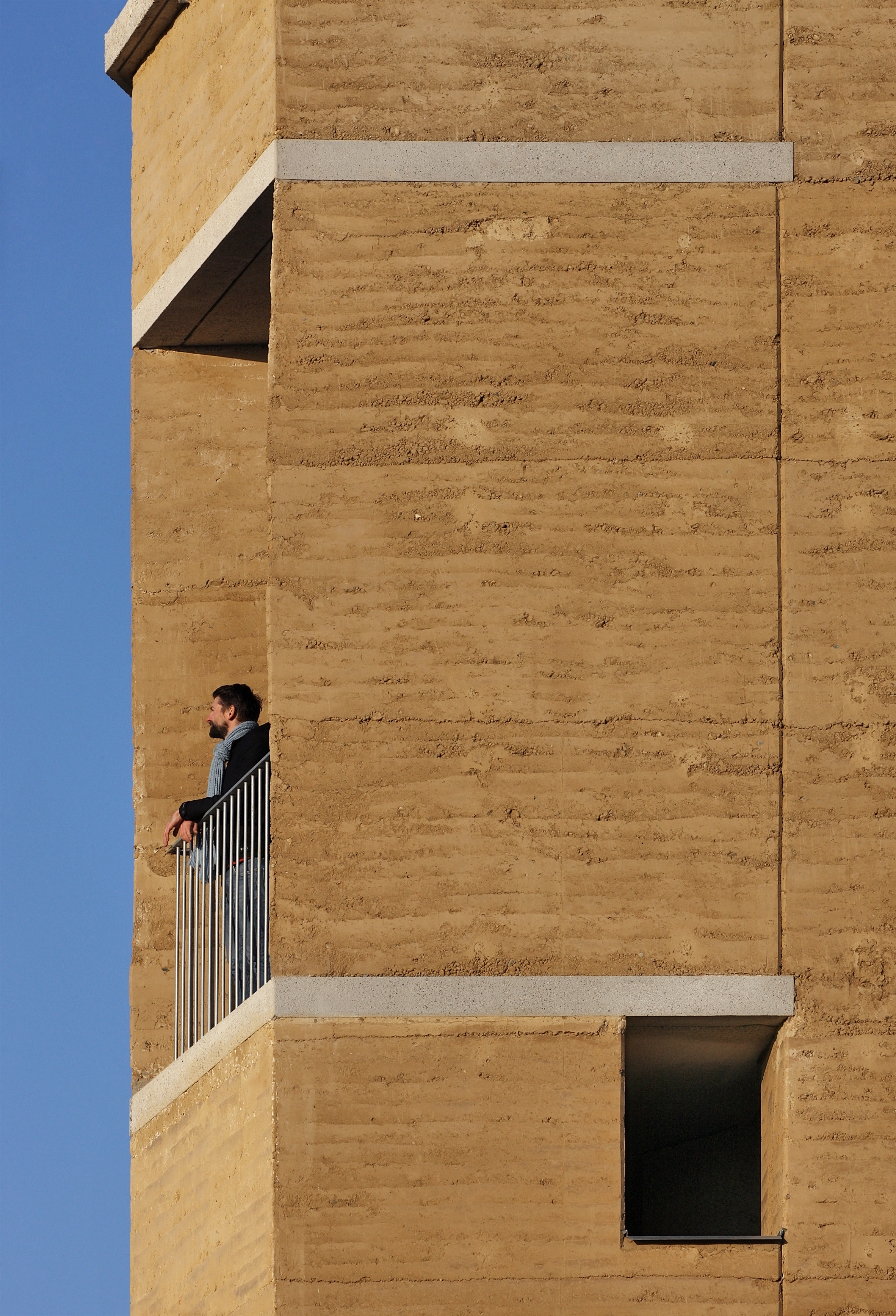 To provide a tangible link to the history and natural properties of the site, the architects chose to construct the building from materials excavated from the Maas area.

“Through its materialisation, the building tells us about the location in which it is built and becomes strongly anchored in its environment,” said the studio.

The external surfaces are made using rammed earth – a technique that involves compressing layers of damp earth in moulds to form load-bearing walls. 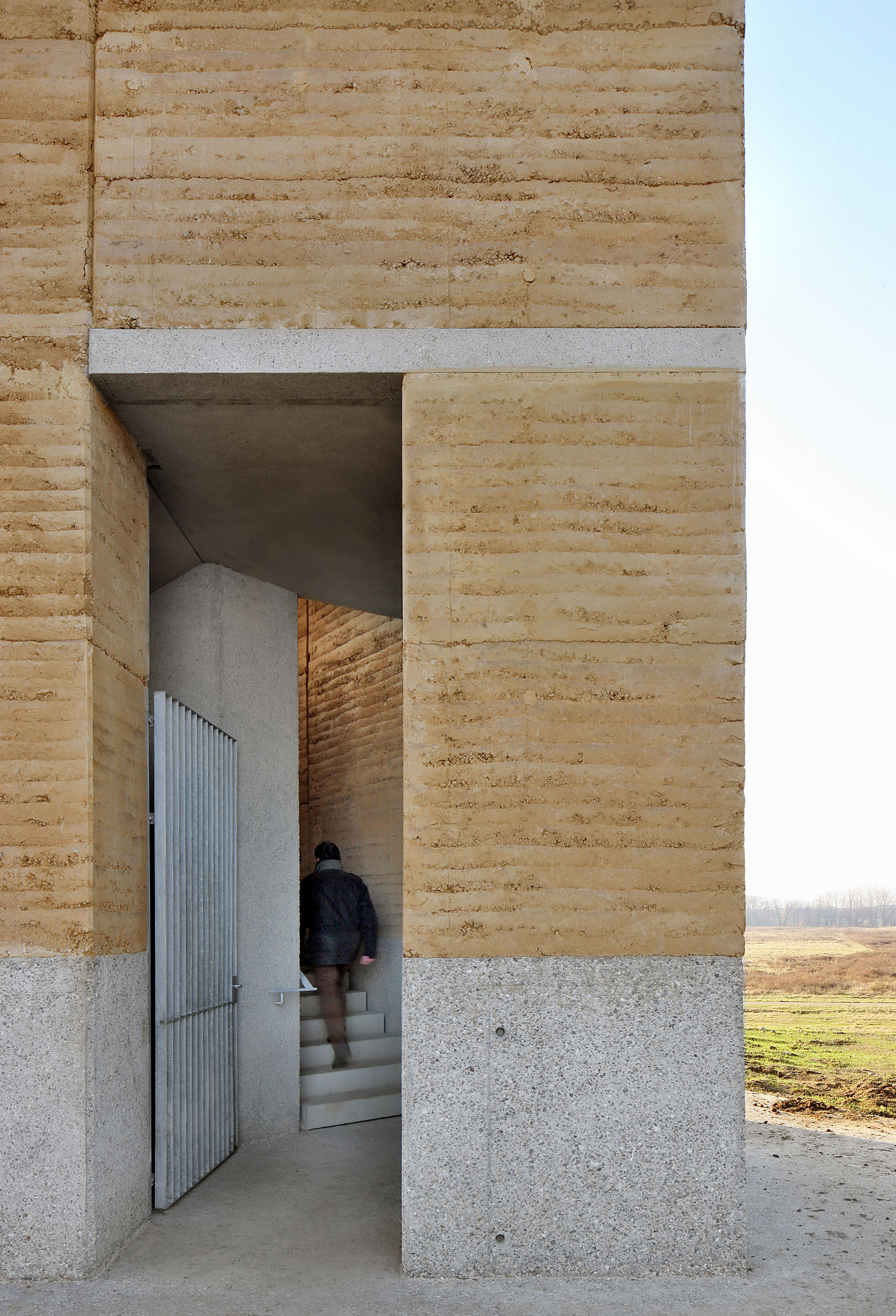 Consultants employed by the project team helped to determine the optimal ratio of gravel, ochre-coloured earth and clay, which is stabilised with a mortar made using volcanic rock from the nearby Eifel mountains.

The surfaces of the external walls will erode gradually so the gravel aggregate will become more visible. The concrete of the central core is sandblasted so the gravel content here is also highlighted. 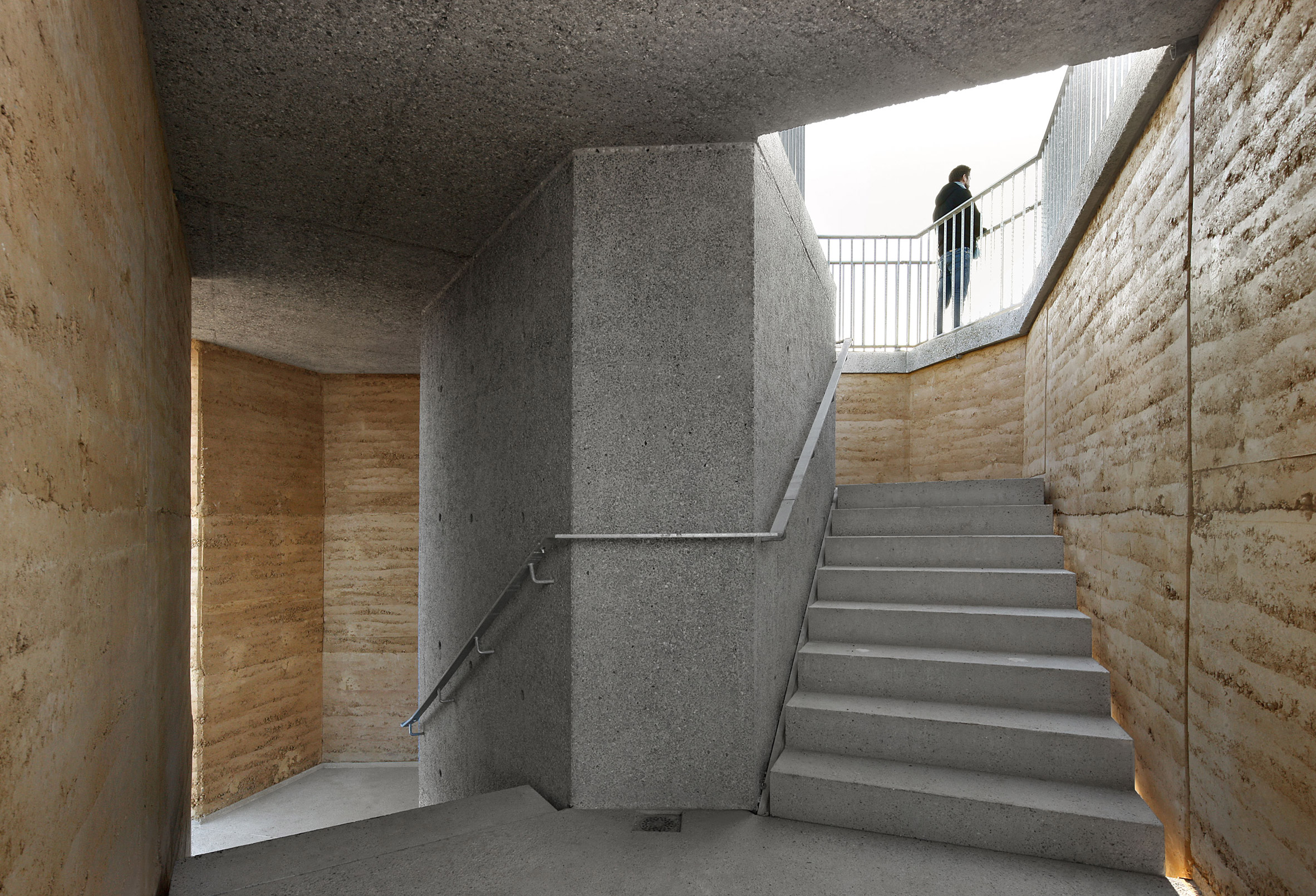 The tower is the first public building in the Benelux region to be constructed from rammed earth, and its use is not currently standardised or documented in a way that could be helpful to architects looking to employ it.

As part of the project, the rammed earth consultants, Cratterre, Vessières&Cie and BC Studie, produced a report explaining how this building method could be applied and adapted to future architectural projects in the region. Rammed-earth projects elsewhere in the world include Europe’s largest modern and contemporary sculpture park and an equestrian centre on Australia’s south coast.