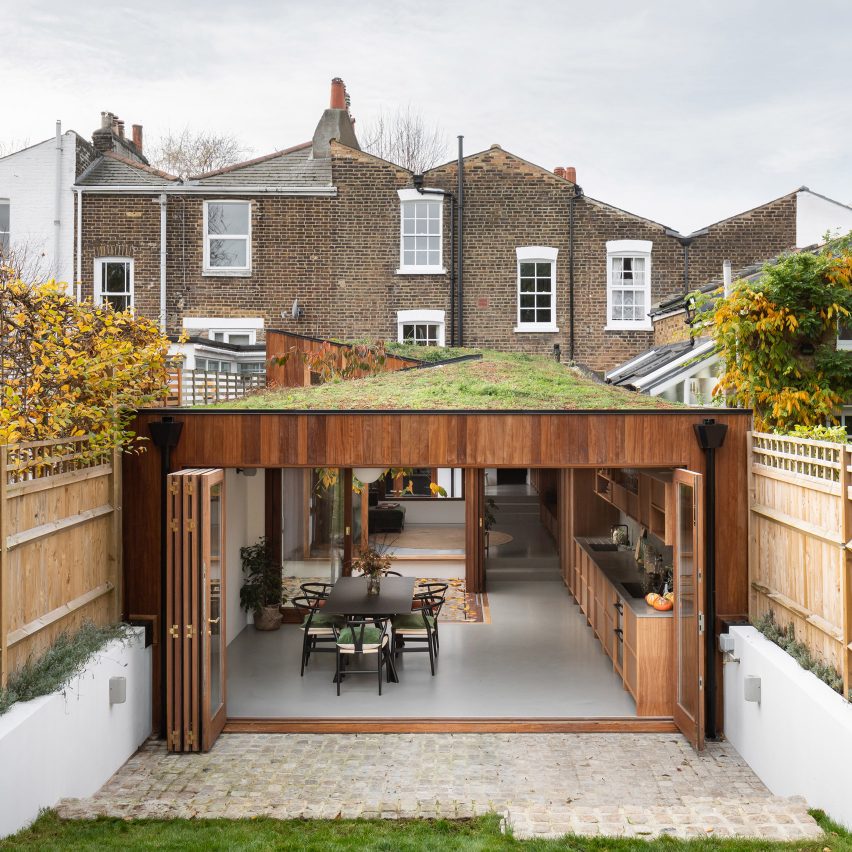 Turner Architects has renovated and extended a Georgian terraced house in south London, creating a sequence of living spaces interspersed with courtyards that bring the changing colours of the seasons inside.

The brief for A Cloistered House was to give a new lease of life to a three-storey residence in Clapham that had been abandoned for several years and was in a poor state internally.

Turner Architects restored the existing Georgian building and created new communal living spaces, which are accommodated in a large extension that opens onto the rear garden.

The project was recently announced as the winner of the Urban Oasis of the Year prize at the 2021 Don’t Move, Improve! contest.

The extension at A Cloistered House incorporates a pair of courtyards that separate some of the living areas and introduce protected outdoor spaces at the centre of the home.

The dining room and kitchen are accommodated at the rear of the extension closest to the garden, and separated from a living room in the middle of the plan by one of the courtyards.

“Conversations we had with the clients resulted in this formal courtyard arrangement at the back of the extension,” architect Paul Turner told Dezeen.

“The single cherry tree in the central courtyard becomes like a timepiece for the seasons, with the family able to watch the blossoms appear in spring and the leaves changing colour.”

A second sunken courtyard to the rear of the existing building functions as a light well that allows natural light to reach a bedroom and playroom on the lower ground floor.

Turner explained that inspiration for the enclosed gardens came from Dutch courtyard paintings admired by the clients, as well as from monastic cloisters and east-Asian courtyard houses.

Sliding doors enclosing the central courtyard can be opened to connect the living and dining spaces on either side. The dining and kitchen area can also be opened up to the garden by retracting the concertinaed glass doors lining this space.

“It was about ensuring that the house can open and close as required,” the architect added. “On a nice summer’s day they have a really private, protected outdoor space at the heart of the home that can open up to become one big space.”

A Cloistered House is located within a conservation area, so the 14-metre-long extension was designed to be subservient to the existing property and to ensure it does not impact the neighbouring houses.

The extension’s floor level was lowered to prevent the roof height from extending above the fences on either side. Its angular roof provides glimpses of the sky and is covered in grass and wildflowers to maintain the site’s overall green area.

The refurbishment of the existing building sought to restore the formal arrangement of internal spaces, whilst making them suitable for modern living.

According to Turner, the objective of A Cloistered House’s renovation was to create “two good rooms on each floor”, with a room to the front and another to the rear, supplemented by bathrooms and utility spaces.

The cellular arrangement of bedrooms, studies and bathrooms echo the living spaces found in typical courtyards or monastic accommodation. These spaces also protect the extension from the bustle of the adjacent street.

“You have busy London life happening at the front of the house,” added Turner, “with the existing house becoming a defensive wall shielding the quiet, private areas for family gathering at the back.”

Throughout the existing building, original features such as cornicing and windows were restored or replaced. The extension has a contrasting modern aesthetic, with white-painted walls, cement kitchen worktops and iroko-wood cabinetry forming a reduced material palette.

Other projects featured on the shortlist for the annual Don’t Move Improve! competition, which is organised by New London Architecture, include the colourful renovation of a townhouse in Islington by Office S&M, and Fraher & Findlay’s extension of a self-build modular house.

Photography is by Adam Scott.