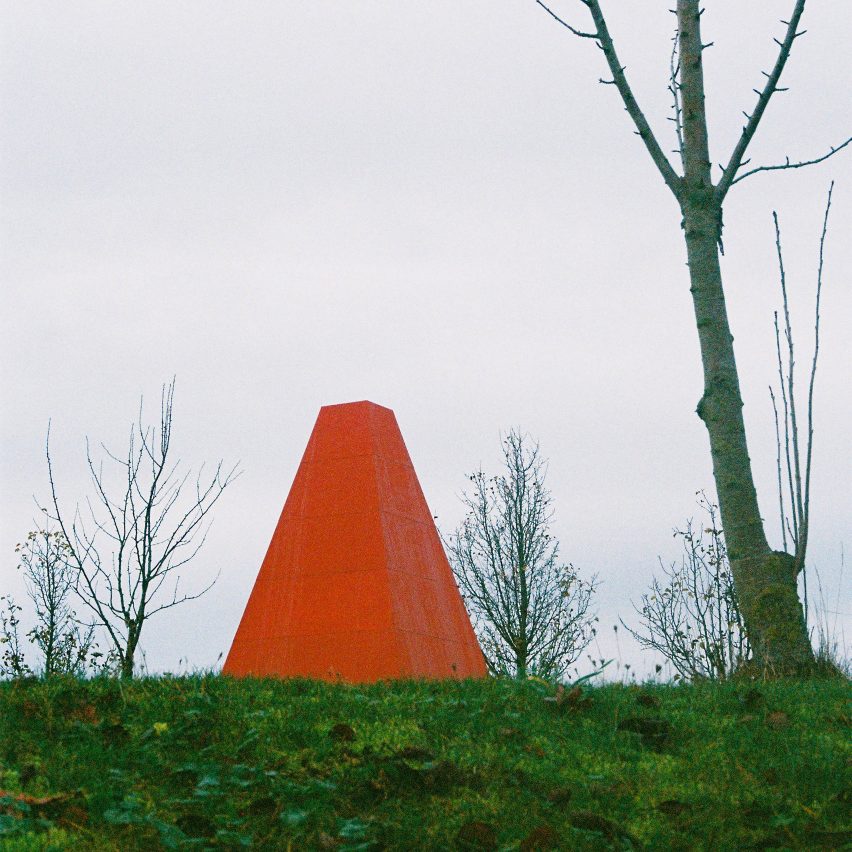 Mariana de Delás and Gartnerfuglen Arkitekter have collaborated on the construction of En Passant, a small red pavilion in France that invites passersby to stop and play chess.

En Passant has a tall, slender structure distinguished by its oversized hip roof, which is designed to stand out within the green landscape of Parc des Îles in the town of Lens.

This is helped by its bright red cladding, which is made from powder-coated metal and was chosen by de Delás and Gartnerfuglen Arkitekter to mimic the boldness of “paradise birds in the rainforest”.

“We liked for the structure to be vertical, to serve as a visual landmark in the space, identifiable from the distance and attractive to the wanderer,” de Delás told Dezeen.

“We love to believe that small objects in vast nature spots can be seen as creatures living in nature, using colour as a tool to attract mates like paradise birds in the rainforest.”

En Passant’s structure comprises a steel frame wrapped in the red powder-coated hip roof, both prefabricated with steel artisans 2Monos Studio before being shipped to the site.

Inside there are four steel chairs with Mares stone seats, which are bolted to a concrete slab foundation and double as supports for the roof. They are complemented by a matching chessboard, made from the same stone.

The large hip roof is designed to blocks outward views to help users focus on the chess table, but to ensure ample daylight while playing, a plexiglass skylight has been positioned overhead.

De Delás and Gartnerfuglen Arkitekter’s idea for En Passant was informed by the isolated stone Chess Playing Pavilion on the Botai peak of Mount Huashan in China.

The architects hope their pavilion will encourage more people to play chess and also reestablish it as a popular board game to play outdoors and in public.

“Chess was widely played outdoors all over the world during the 1960s and 1970s, hosting internal city leagues in parks where children and adults of all ages interacted by either playing or watching,” de Delás explained.

“When commissioned for a pavilion, our idea was for it to serve and recuperate these outdoor board games and interactions.”

En Passant, photographed on a film camera, was designed as part of a competition called L’Odyssée des Cabanes.

The programme is held annually by Euralens and the KRAFT association to invite creatives from around the world to design pavilions for parks in the local area.

The pavilion is intended to be an easily replicable structure, which de Delás and Gartnerfuglen Arkitekter hopes will encourage other cities to build them and encourage locals to play outdoor games.

“We developed an easy assembly and packaging system that permits the pavilion to be reproduced and assembled in different European cities as a recognisable landmark promoting chess and other outdoor board games,” de Delás said.

Photography is by Alejandro Dumon and de Delás.