Richard Pender was involved in every stage of this self-build project to create a sustainable and accessible house for his parents in rural Northumberland, which involved fabricating the wooden frame on site in a disused barn. 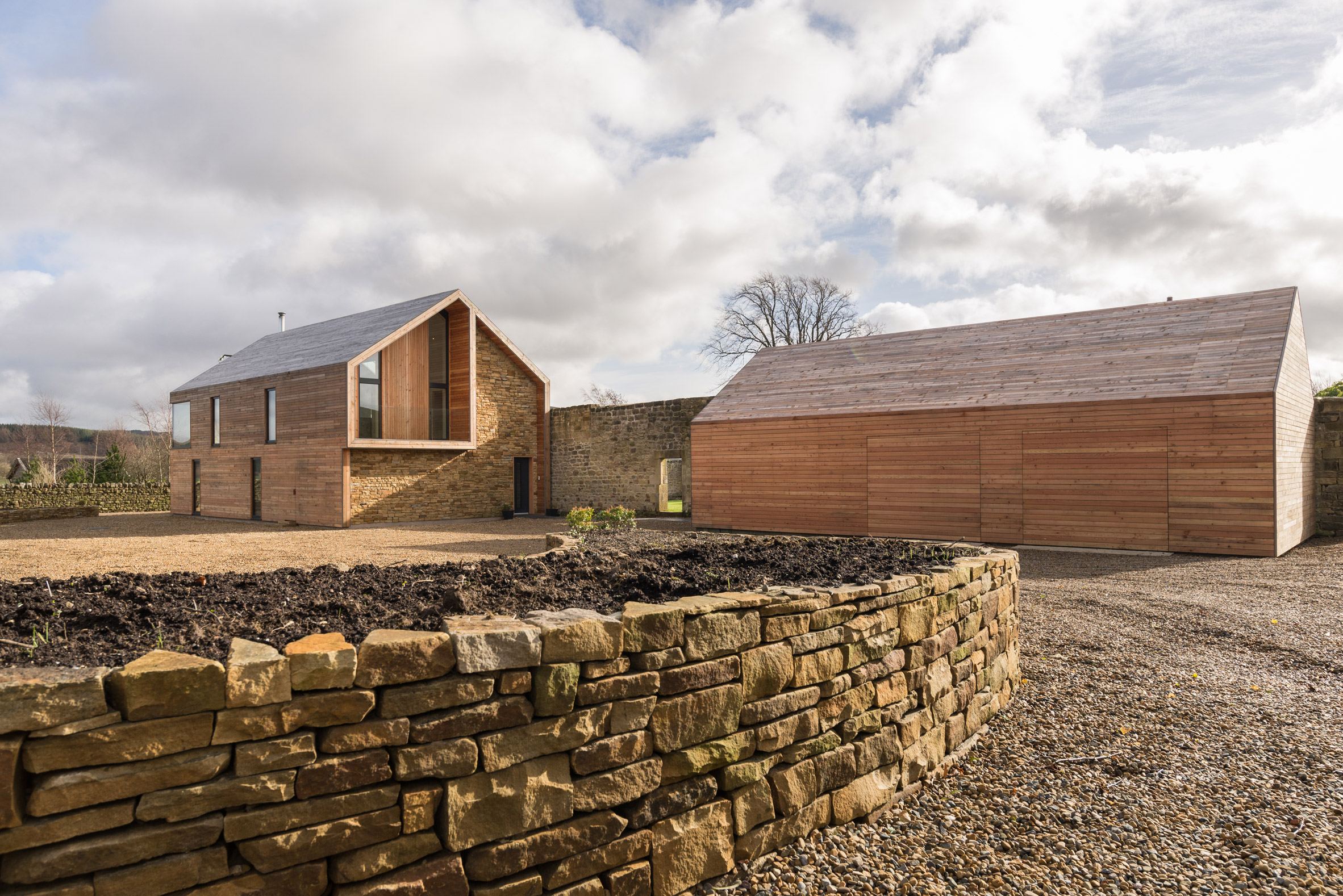 Pender‘s parents previously resided in a traditional farmhouse and wanted to continue living on the same site, but needed a modern home that could adapt to their changing needs as they grow older.

Pender, who is not qualified as an architect but describes himself as a property developer, worked in collaboration with Dan Kerr of MawsonKerr Architects on the design of the building, which occupies an area within a former farmyard to the rear of the existing house.

The proposal was driven by the functional requirements of Pender’s parents, and by a desire to create a building that employs Passivhaus techniques to minimise its environmental impact.

“The underlining principle in the brief was that the new dwelling should be a highly sustainable, energy efficient construction, that should facilitate ease of living for the elderly,” Pender told Dezeen.

“Secondary to that was the desire for a clean, contemporary architecture that stood distinct from, but respectful to, the much loved traditional farmhouse and neighbouring buildings.” 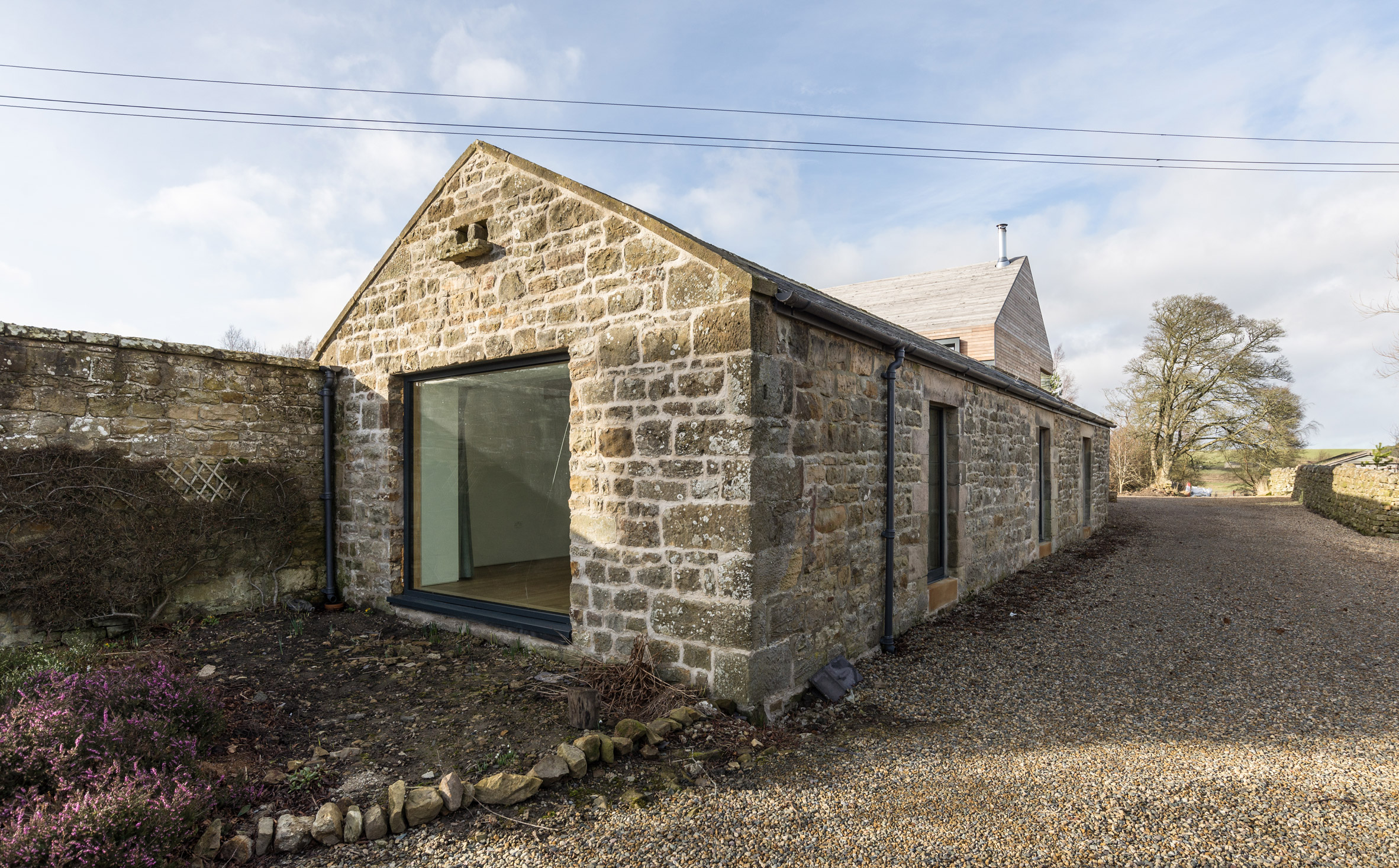 The project involved redeveloping the yard and outbuildings, including a single-storey stone and slate barn, which was converted into an annex containing the master bedroom and a home office or snug.

Pender and Kerr’s design was met with resistance from the local planning authority, which only granted permission to build in this area of designated open countryside due to the “exceptionally high quality of design”.

“It has been a very involved, rollercoaster of a project but particularly rewarding. This collaboration has seen our design delivered to a very high quality and is a model we are looking to use in the future,” Kerr told Dezeen. 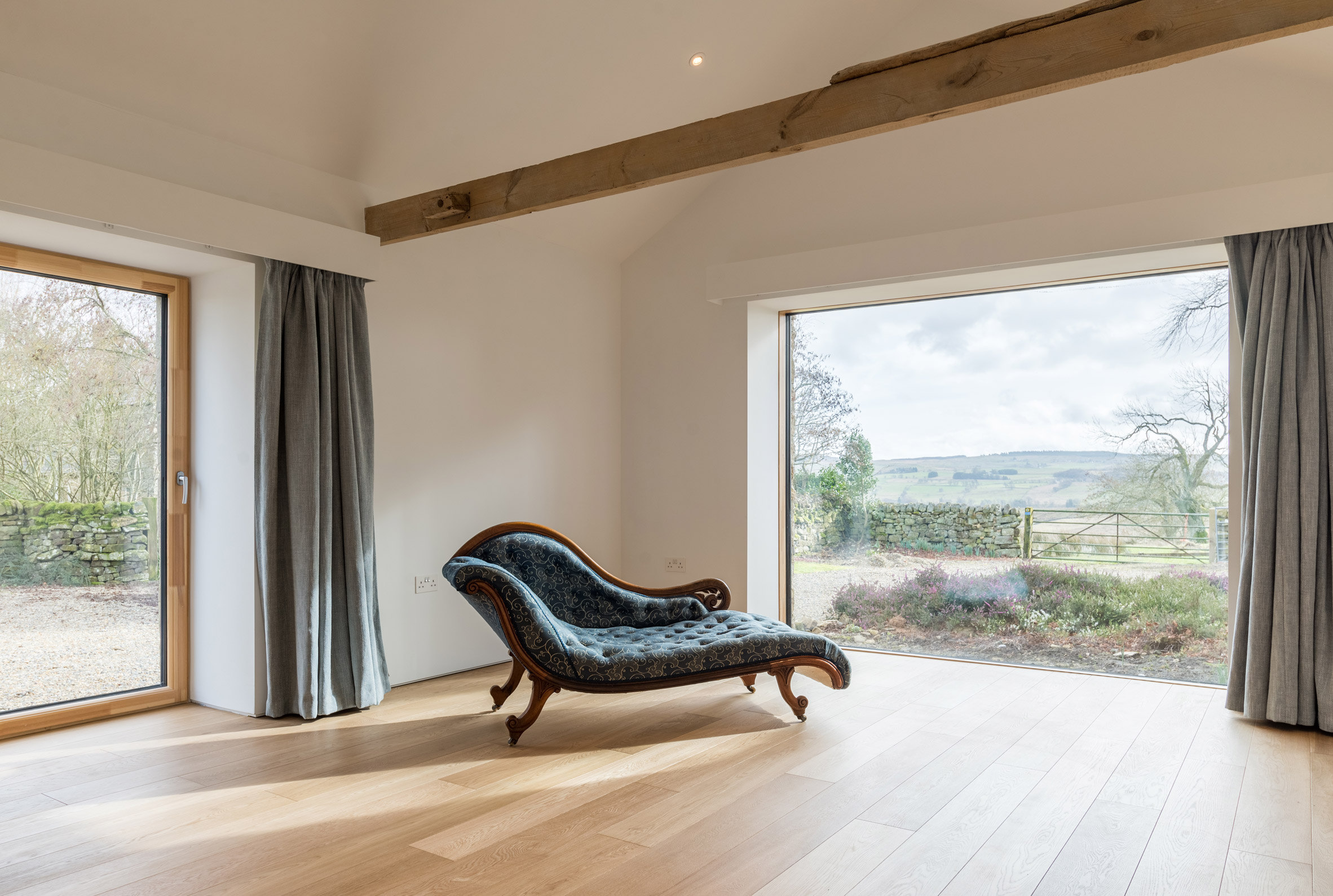 The pair settled on a simple gabled form that recalls the region’s agricultural buildings and is executed using local materials in a contemporary way.

“The basic barn type shape is familiar in the Northumbrian countryside,” explained Pender, “with the vernacular stone and timber materials detailed in such a way as to take nothing away from that basic, simple form.” 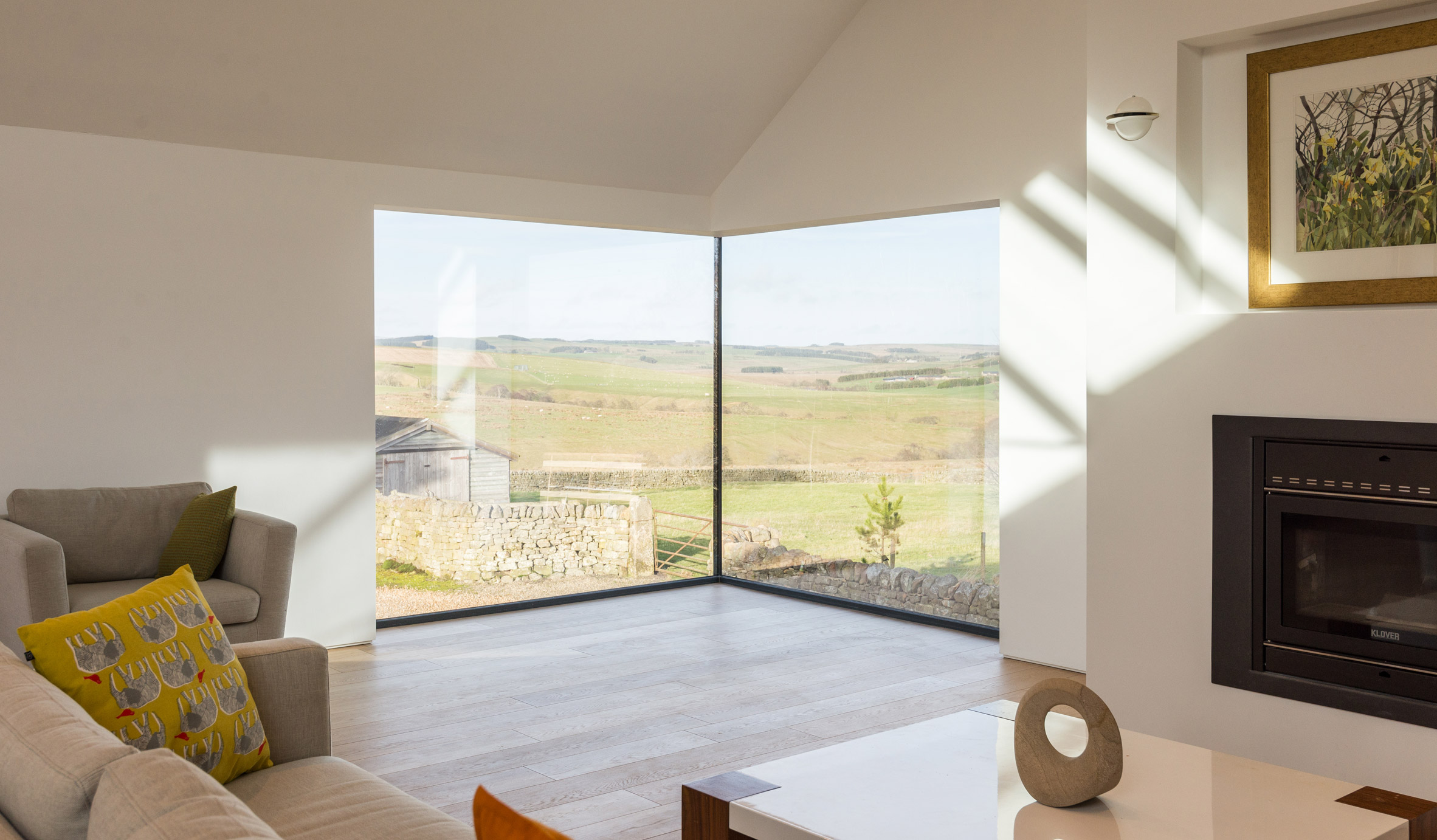 The original intention was for the house to be delivered by a professional contractor, but Pender decided to take on this role in order to complete the project on budget.

Three years of research was required to identify suitable products, materials and construction methods that enabled the project team to ensure the level of detailing and energy efficiency are of the highest standard.

“Whilst an exhausting process, self-build definitely allowed us to deliver a superior building and finish with the support of one or two key local tradespeople,” claimed Pender.

A disused concrete-framed hay barn in the farmyard was converted into a workshop where Pender built the timber frame for the new building, using a bespoke jig and methods he had only ever applied previously on a much smaller scale.

Pender also had to learn how to use standard materials and construction techniques to make the building airtight and avoid thermal bridging. 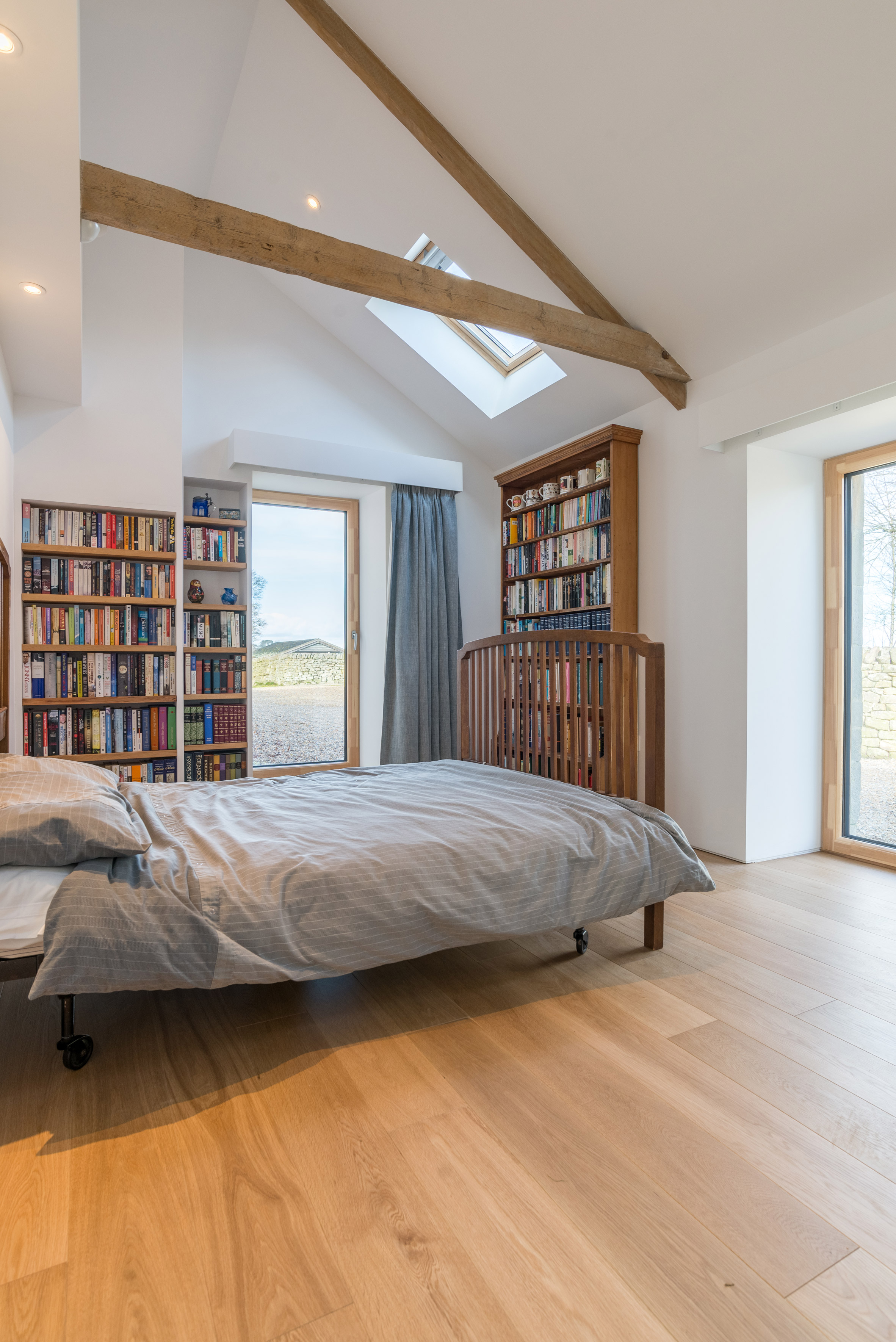 This careful consideration of detailing combined with the use of effective insulation, a biomass pellet stove, photovoltaic cells and local materials, means the house achieves most of the criteria required for Passivhaus status. It was restricted from actually attaining certification by the north facing aspect of the site.

For sustainability and aesthetic reasons, the building is predominantly clad in locally sourced larch boards. One of the gable ends incorporates stone that complements the existing walled garden and is mirrored in the end wall of the nearby garage.

Internally, the house is configured with the bedrooms on the ground floor and the living areas positioned above to ensure they are provided with the best views of the surrounding countryside.

Plenty of windows and skylights allow natural light to flood into the bright and neutrally decorated interior, which incorporates accessible features such as a lift, level thresholds, wet rooms and an electronic intercom system. 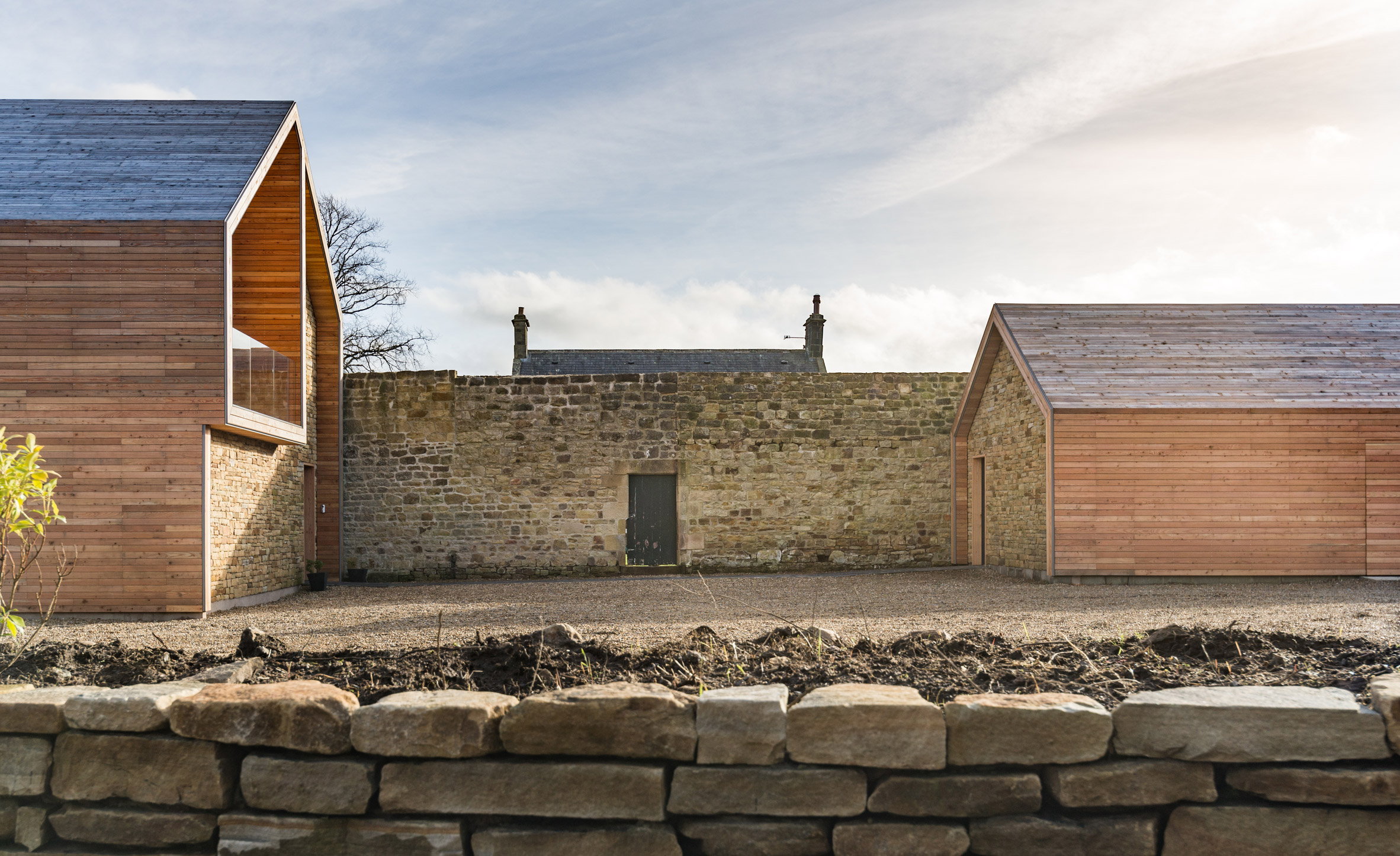 The building is named Shawm after an old Northumbrian word meaning “to warm oneself”, which Pender and Kerr felt encapsulated the physical and philosophical qualities inherent in the project.

Photography is by Rob Rhodes unless otherwise stated. 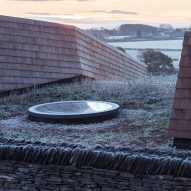