Klein Dytham Architecture has completed a visitor centre and ice rink in Japan’s Karuizawa region, featuring a curving, shingle-clad frontage that follows the edge of a landscaped skating pond. 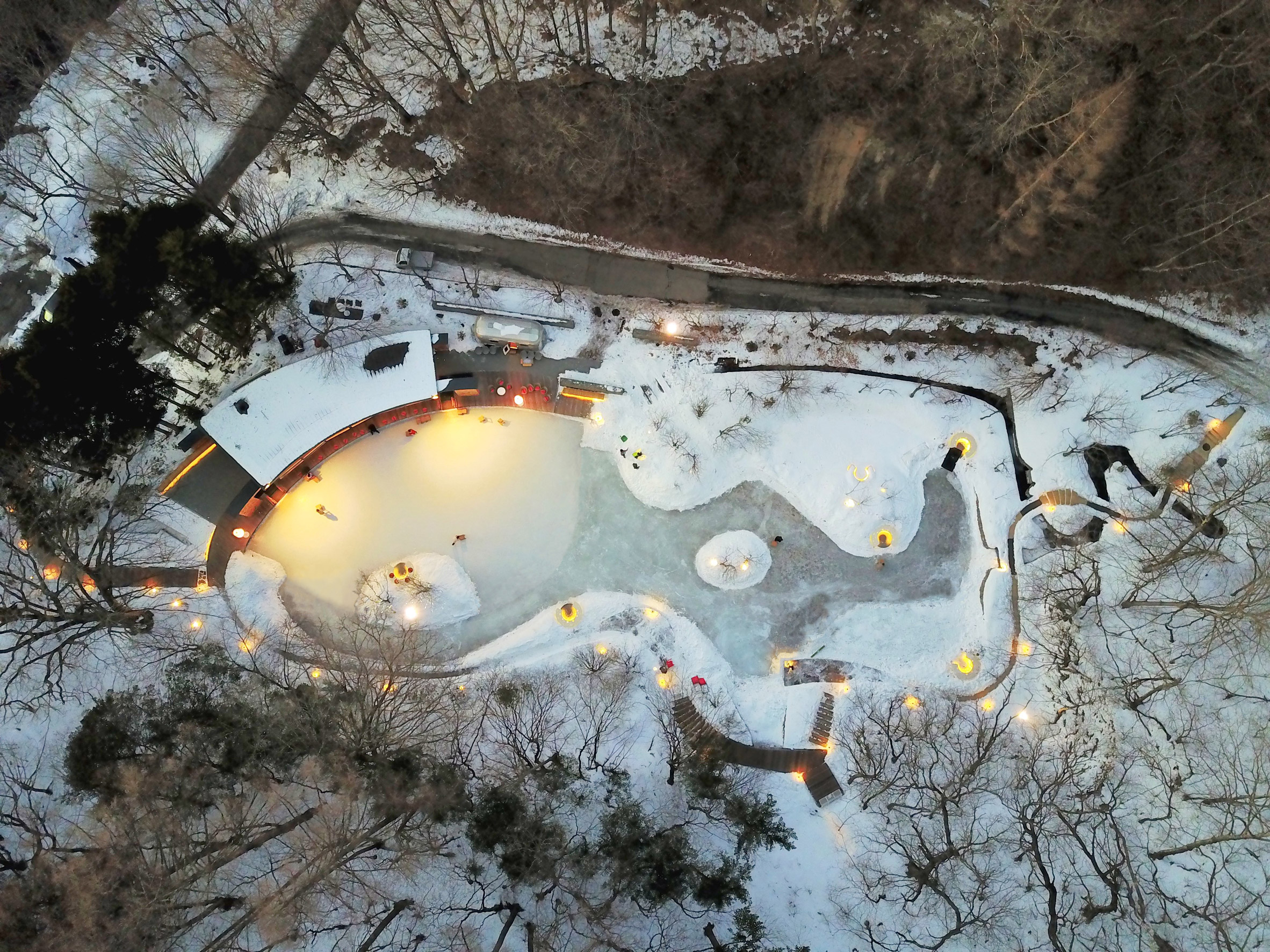 The Tokyo-based architecture studio collaborated with landscape design firm Studio on Site to develop the proposal for a year-round visitor attraction located in the foothills of Mount Asama.

Karuizawa is a 90-minute journey by bullet train from Tokyo and is a popular weekend destination for visitors looking to explore its hot springs in summer, colourful leaves in autumn and snowy landscapes in winter. The Picchio Visitors Centre and Ice Rink is part of the Hoshinoya Hotel complex, which is situated next to a bird sanctuary and a disused ice-hockey rink that is now a breeding ground for dragonflies.

In the summer and autumn, the structure functions as a nature and information centre from which visitors can depart on hikes around the bird sanctuary. In winter, it transforms into a clubhouse for the ice rink. 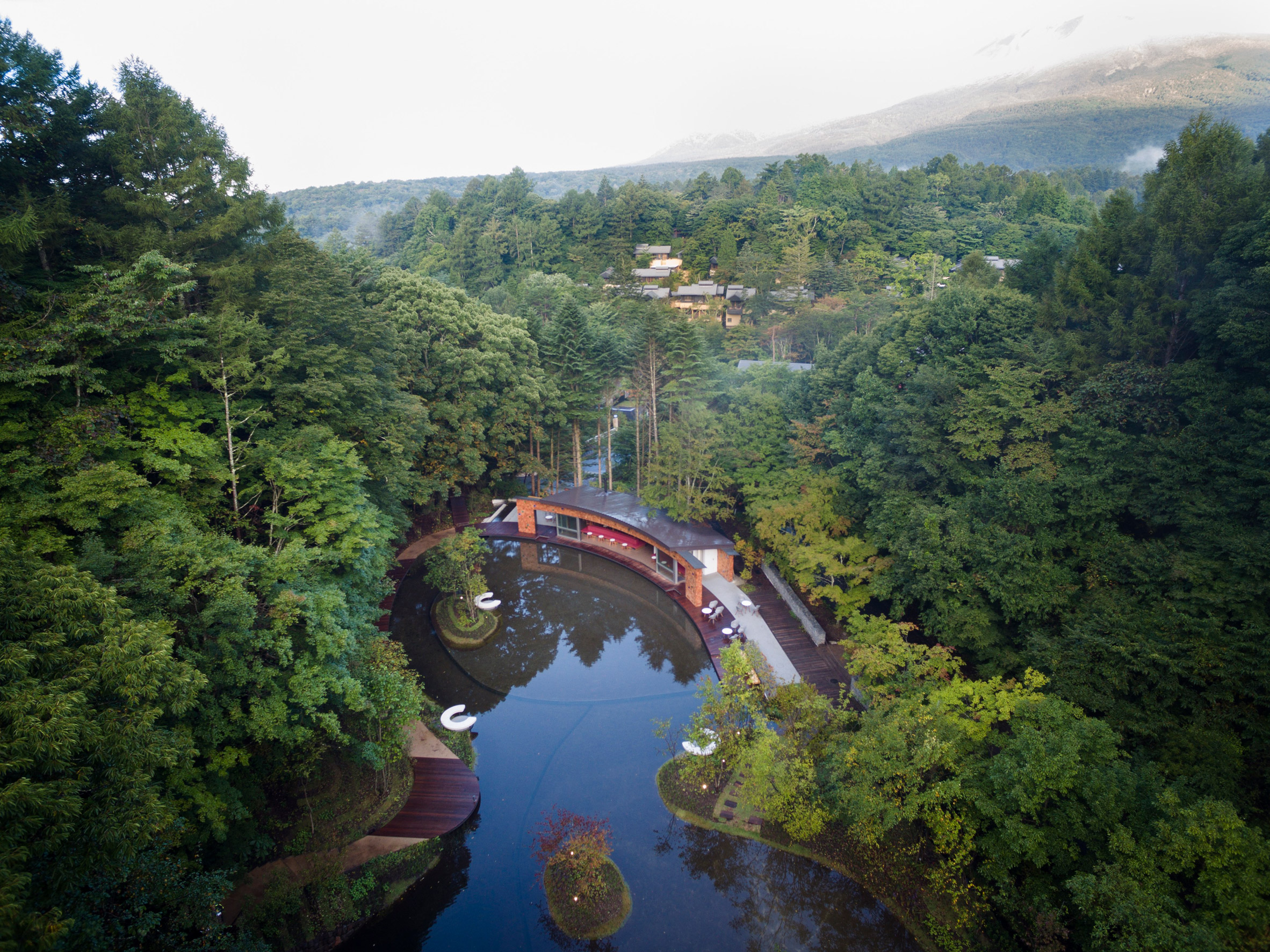 “The Picchio project revolves around enhancing all of the existing site facilities,” said Klein Dytham Architecture in a statement. “The new ice rink is naturally landscaped according to the site topography and the clubhouse brings together the site’s dual purpose.”

The building features a pair of curving walls that follow the perimeter of the rink and create sweeping lines intended to reference the arcs made by skaters on the ice. Its outer surfaces are clad in cedar shingles, which are interspersed with anodised aluminium tiles in green and blue hues reminiscent of the colours of dragonflies.

The clubhouse is positioned on the only part of the site that receives direct sunlight and its south-facing surface incorporates glazed sliding doors that open up in the summer to enhance the connection with the water outside. “A large, curved-steel beam forms a 25-metre, column-free portal frame, allowing the sliding doors to completely slide back and give amazing, uninterrupted views of the pond and forest beyond,” the architects added.

The solid rear wall of the building features built-in shelves displaying research materials and monitors that can be viewed from a curving bench at the centre of the space. In the winter the shelves are cleared to make space for rental ice skates. 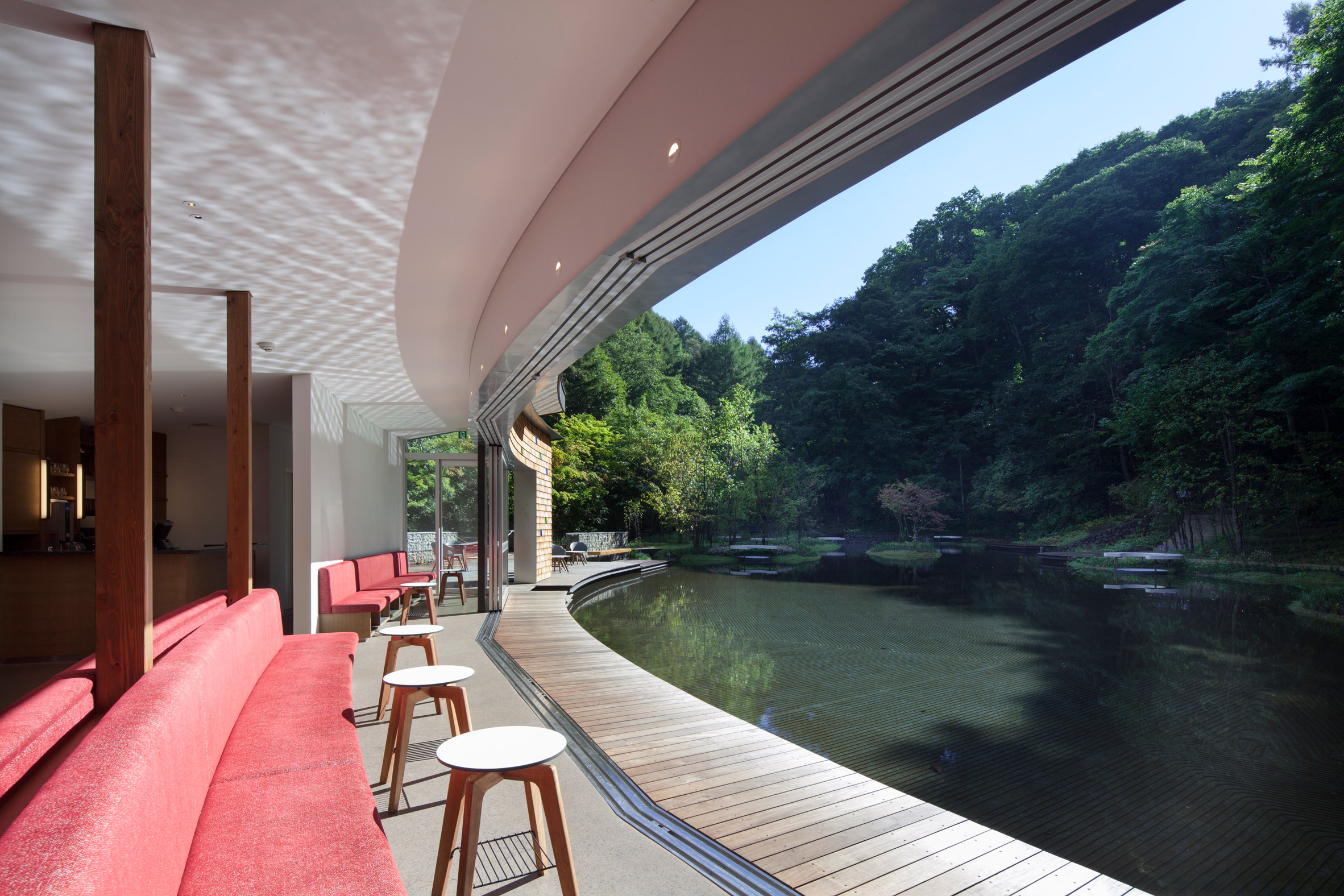 The central bench also offers an ideal perch for looking out at the surrounding nature in summer, or lacing up skates and watching people on the ice in the winter. A widening of the floorplan towards one end of the building creates space for small informal events.

A section of the rink closest to the clubhouse incorporates cooling pipes that aid the freezing of the ice, making it possible to skate early in the season.

The artificially cooled area is lined with temporary railings, which are removed once the rest of the pond freezes naturally. 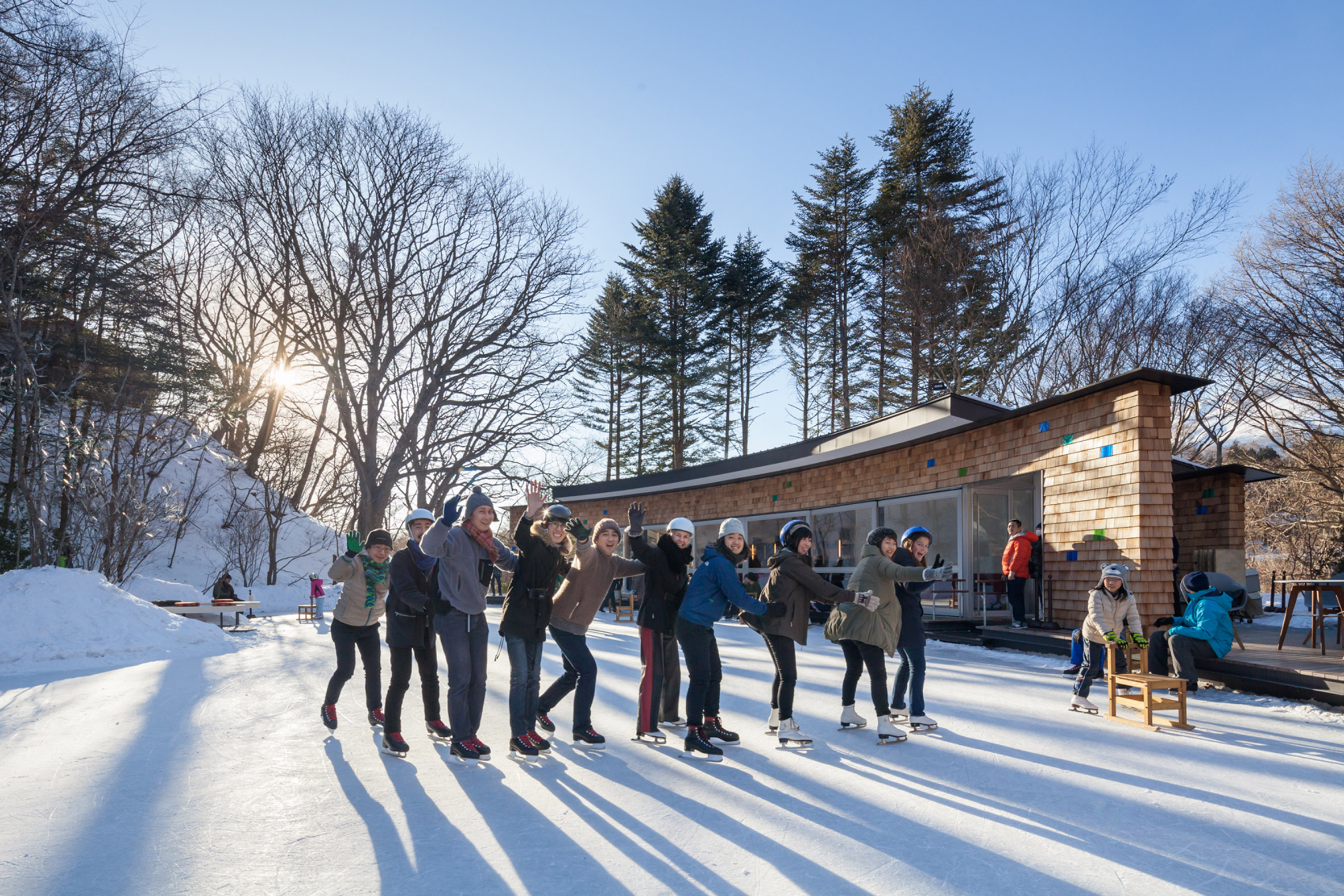 “We believe this is the first time in the world an ice rink has combined both assisted freezing and natural ice,” said Klein Dytham Architecture.

The forms of the building, terraces, walkways and landscaping are based on the natural flow of water through the site. Care was taken to respect the existing nature, with deep wintering pools created in the pond so fish and other creatures have somewhere to live where the ice doesn’t freeze entirely. 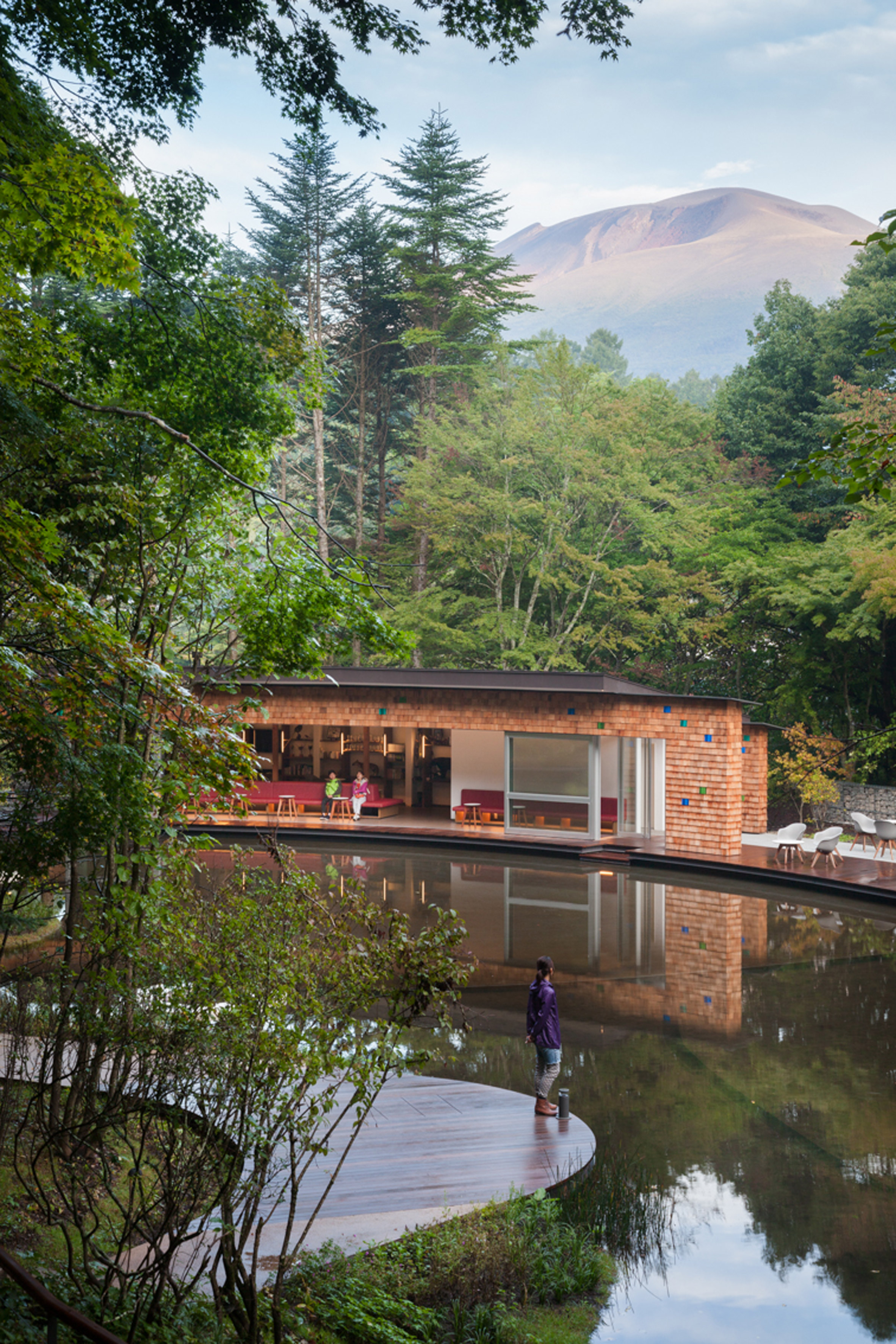 Klein Dytham architecture was established by Royal College of Art graduates Astrid Klein and Mark Dytham in 1991, and works across architecture, interiors, public spaces and installations.

The studio’s previous projects include a book-lined leisure area inside AL_A’s Central Embassy tower in Bangkok, and a commercial building in Tokyo featuring a latticed facade inspired by traditional Japanese crafts.

Photography is by Makoto Yoshida and Brian Scott Peterson.