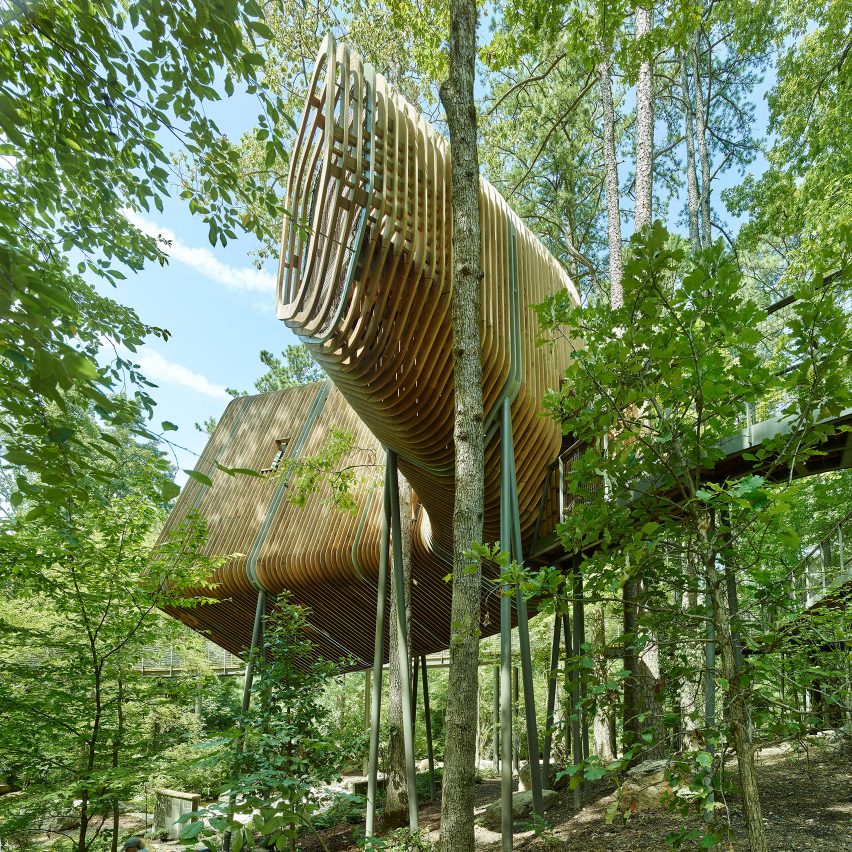 American firm Modus Studio has used steel and heat-treated pine to build an “alive and mysterious” treehouse in Arkansas.

The Evans Tree House is located at Garvan Woodland Gardens, a 210-acre (85-hectare) botanical garden near the town of Hot Springs in central Arkansas. Owned by the University of Arkansas, the nature park occupies a wooded peninsula that is surrounded by the Quachita River. 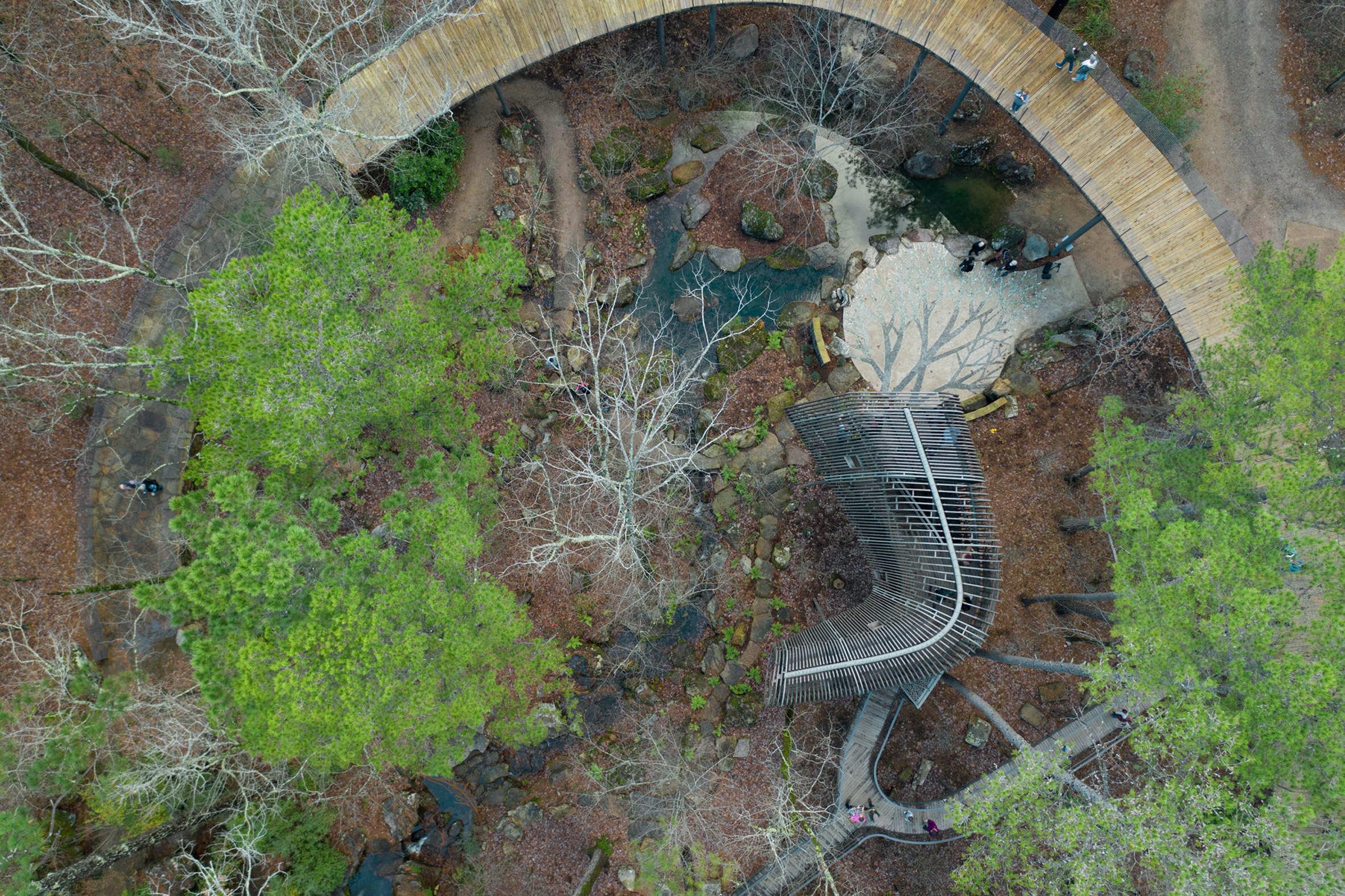 The treehouse is situated within a children’s garden that features native tree species, including oaks and pines. Designed by Fayetteville-based Modus Studio, the structure serves as an interactive, educational experience intended to “bring children back into the woods”.

Dendrology – the scientific study of trees – influenced the building’s programme and design. Featuring a sculptural profile, the treehouse is meant to be read as a dynamic form that changes shape as one moves around the site. 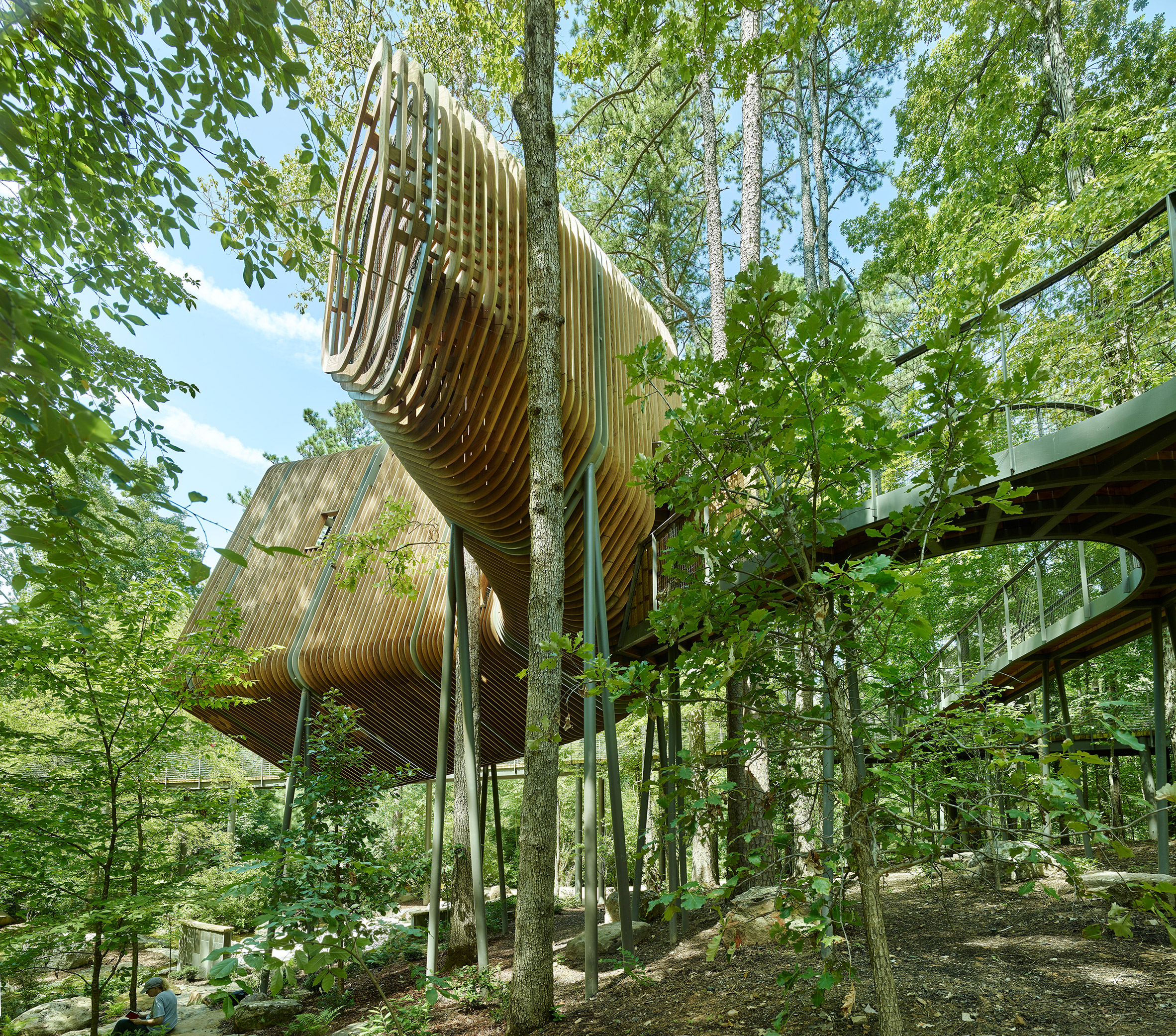 From certain vantage points, the asymmetrical structure appears to lean to one side.

“It is intended to camouflage itself into the landscape and be of the ecology of the place – organic, yet alive and mysterious in nature, purposefully inspiring children’s imaginations about the forest,” said the studio in a project description. 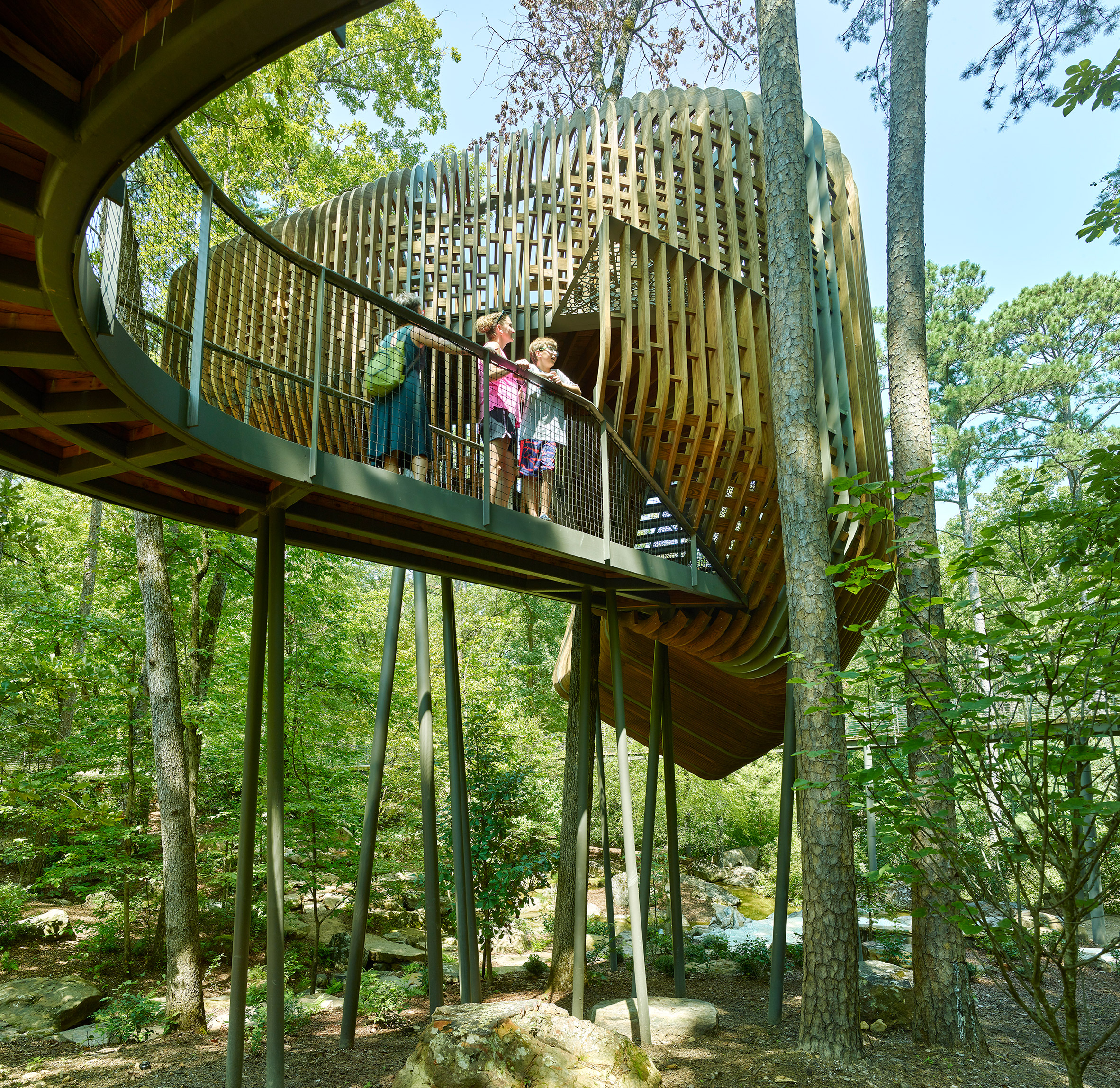 Boomerang-shaped in plan, the building is lifted 13 to 25 feet (four to 7.6 metres) off the ground via six pairs of slender, steel columns.

By elevating the structure, the team was able to protect the earth below, while providing visitors with a feeling of being amongst the tree canopies. An elevated walkway leads to a central opening within the multi-storey treehouse. 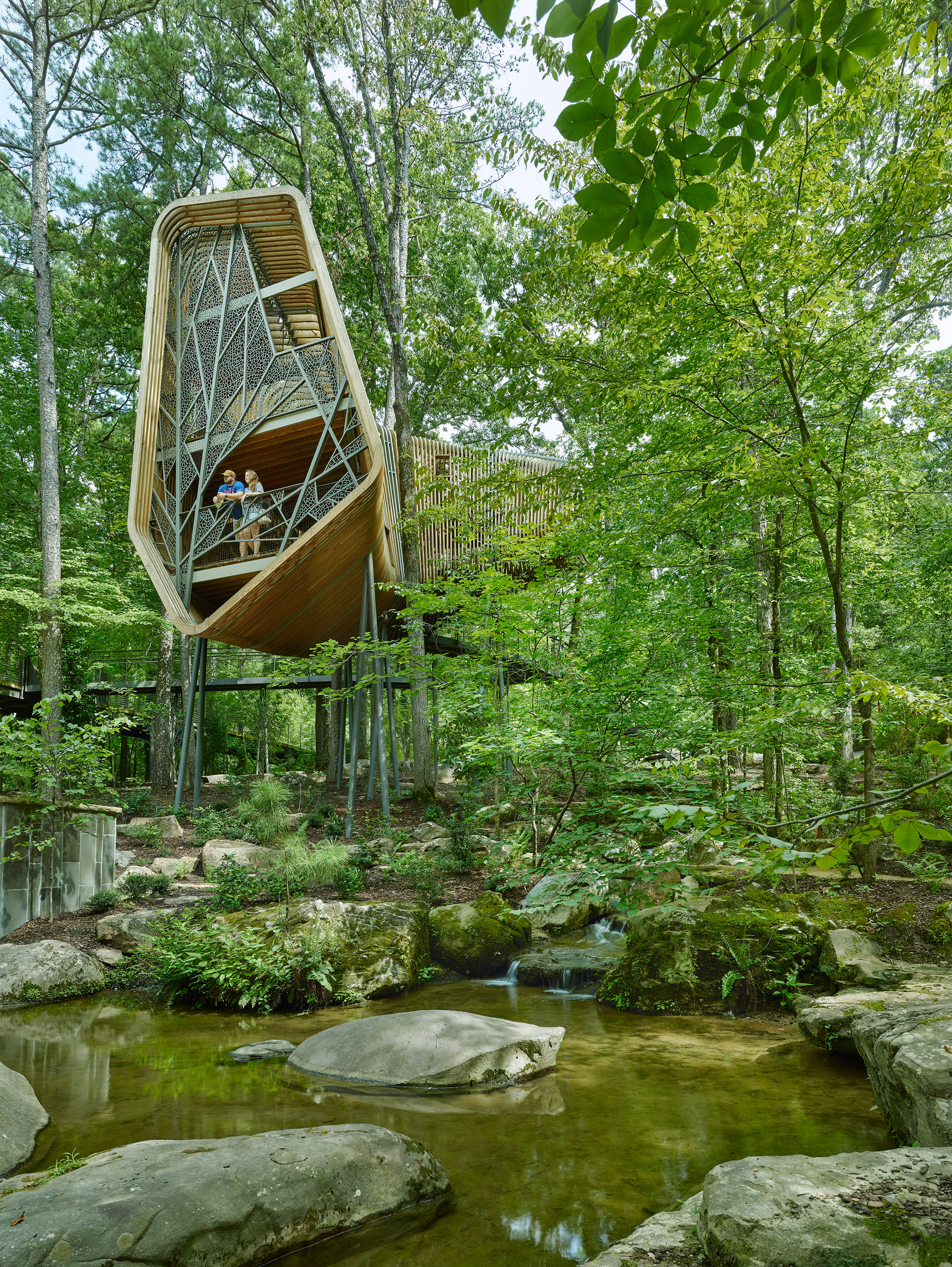 The structure is composed of 113 ribs – 10 are made of steel, while the rest made of thermalised southern yellow pine. The thermalisation process involves using heat and steam to increase a wood’s durability and resistance to weather.

All of the fins connect to a central steel spine that runs the length of the building. 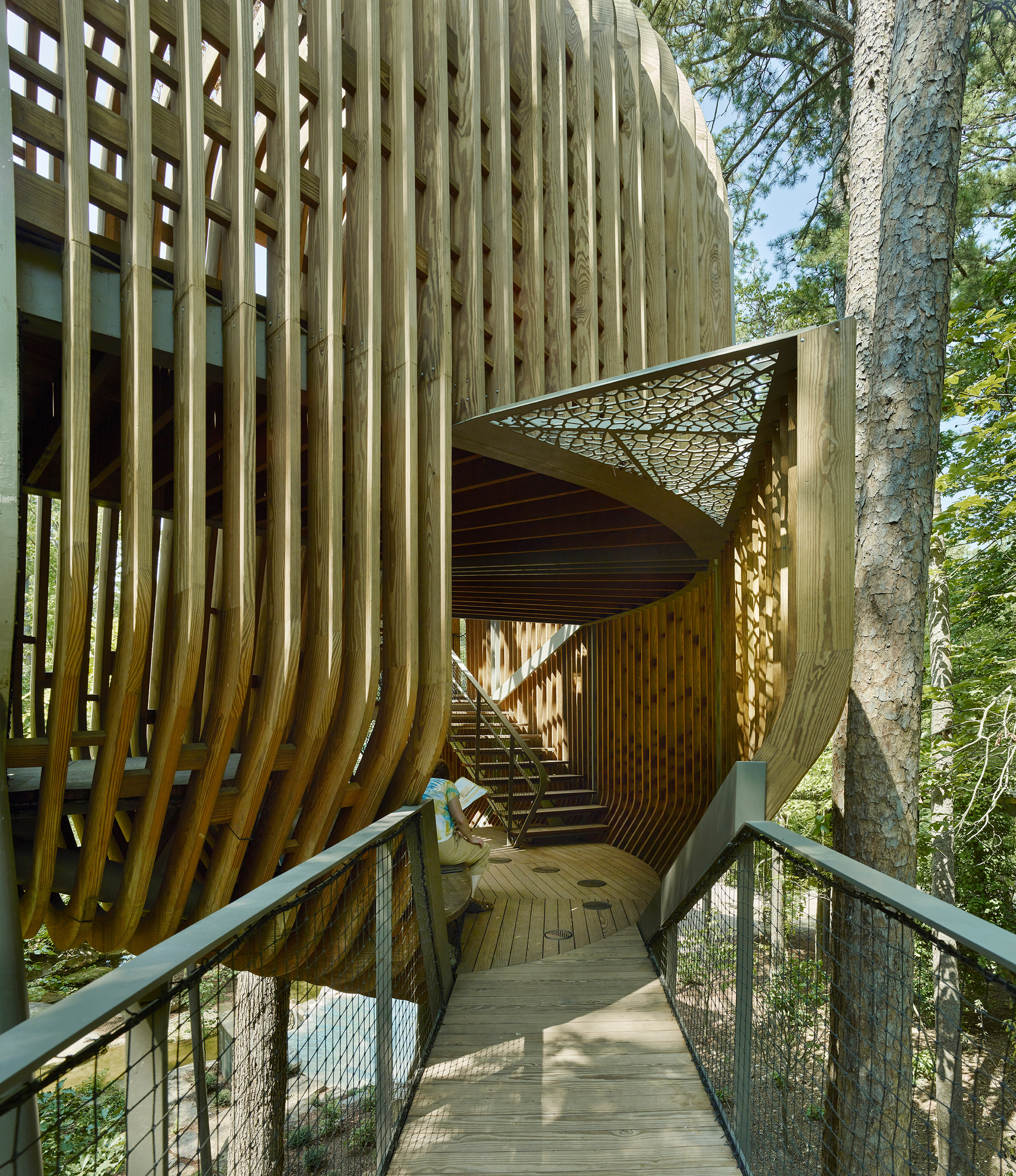 “The steel ribs and spine act as a skeleton, a vertical framework, connecting the top and bottom spines and floor plates to the six pair of columns,” the studio told Dezeen.

“Steel ribs follow the same form created by the wood ribs to help conceal the structural framework of the treehouse and further the goal of creating a mysterious figure in the woods.”

On the east and northern ends of the curving structure, the team created apertures that provide clears views of the forest. The larger opening, on the east, is partly covered by a perforated metal screen.

Created by Modus Studio’s in-house fabrication shop, the screen has a pattern that resembles tree branches and veined leaves. 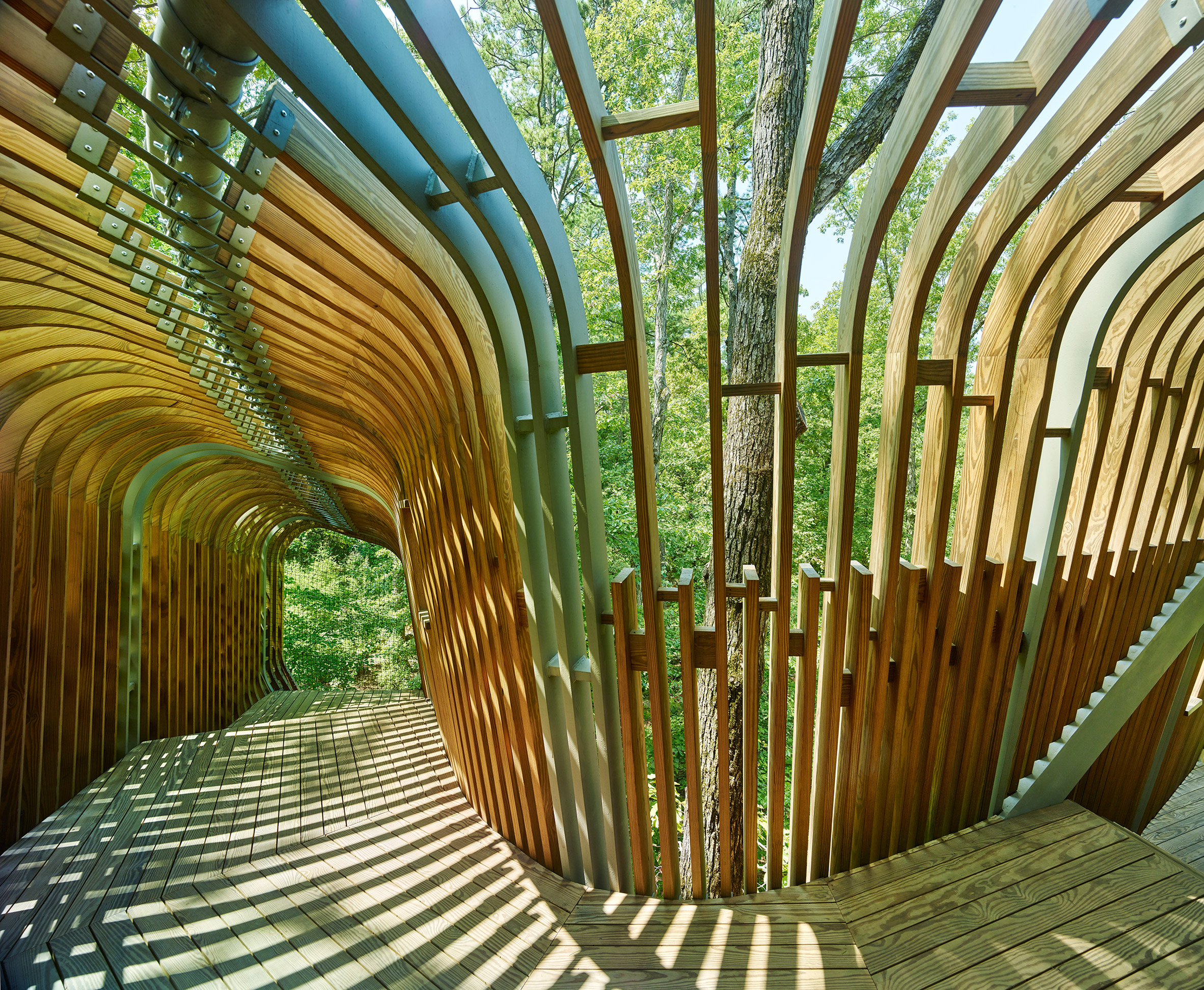 A net was used to cover the smaller aperture at the “tail” of the treehouse. The metal mesh infill protects visitors from falling out while still allowing visitors to feel intimately connected to the forest. This viewing area might even evoke an uneasy sensation, which is part of the design team’s goal.

“A certain feeling of risk and danger is intentional, as this is part of being up in the trees,” the studio said. 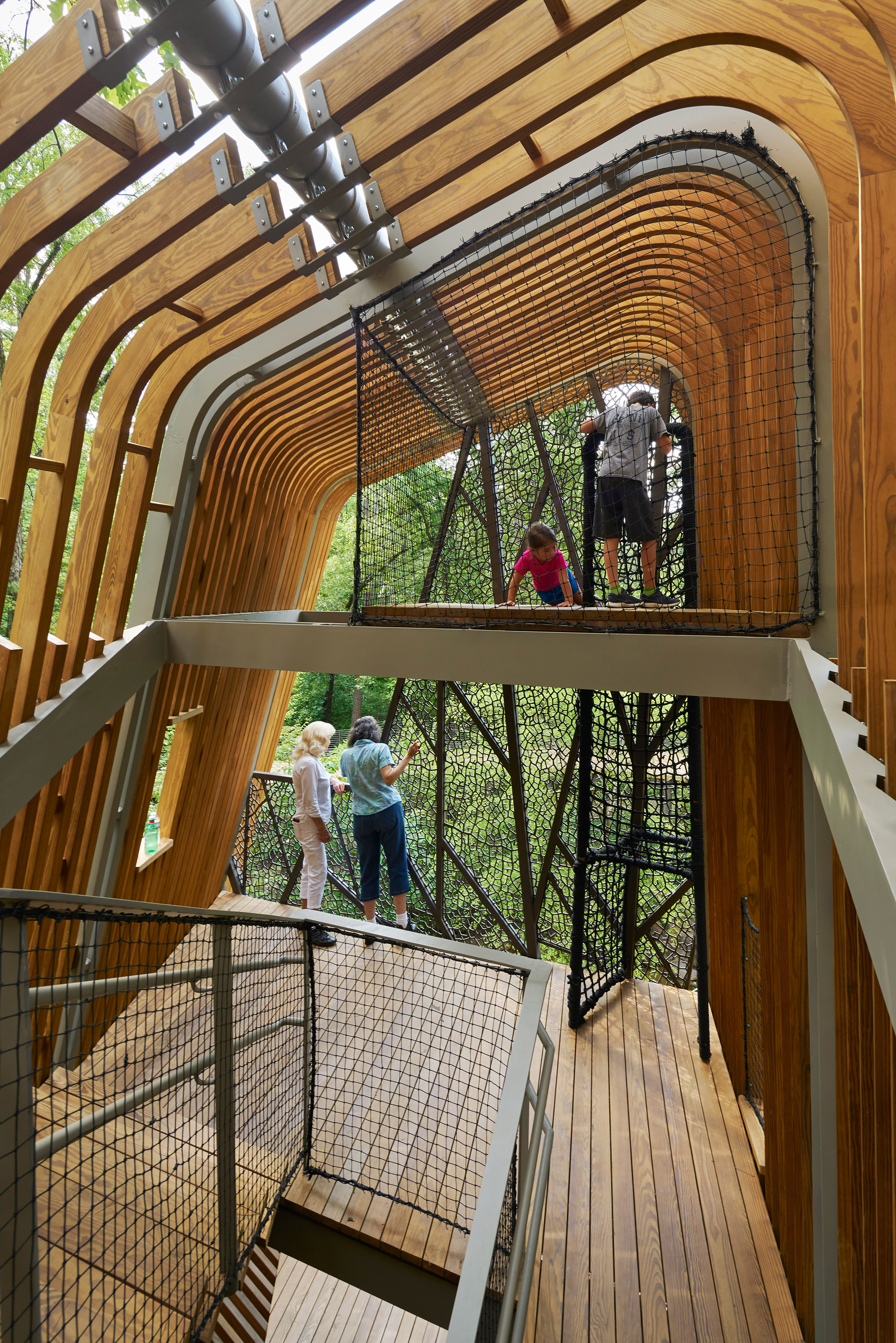 Since its founding in 2008, Modus Studio has completed a number of projects in its home state of Arkansas. The treehouse is among its most seminal works, according to the firm.

“This unique structure is a defining small project for Modus Studio,” it said. “From design to fabrication, we were able to merge our childhood-earned knowledge of the natural world with our hard-earned think, make, do philosophy.” 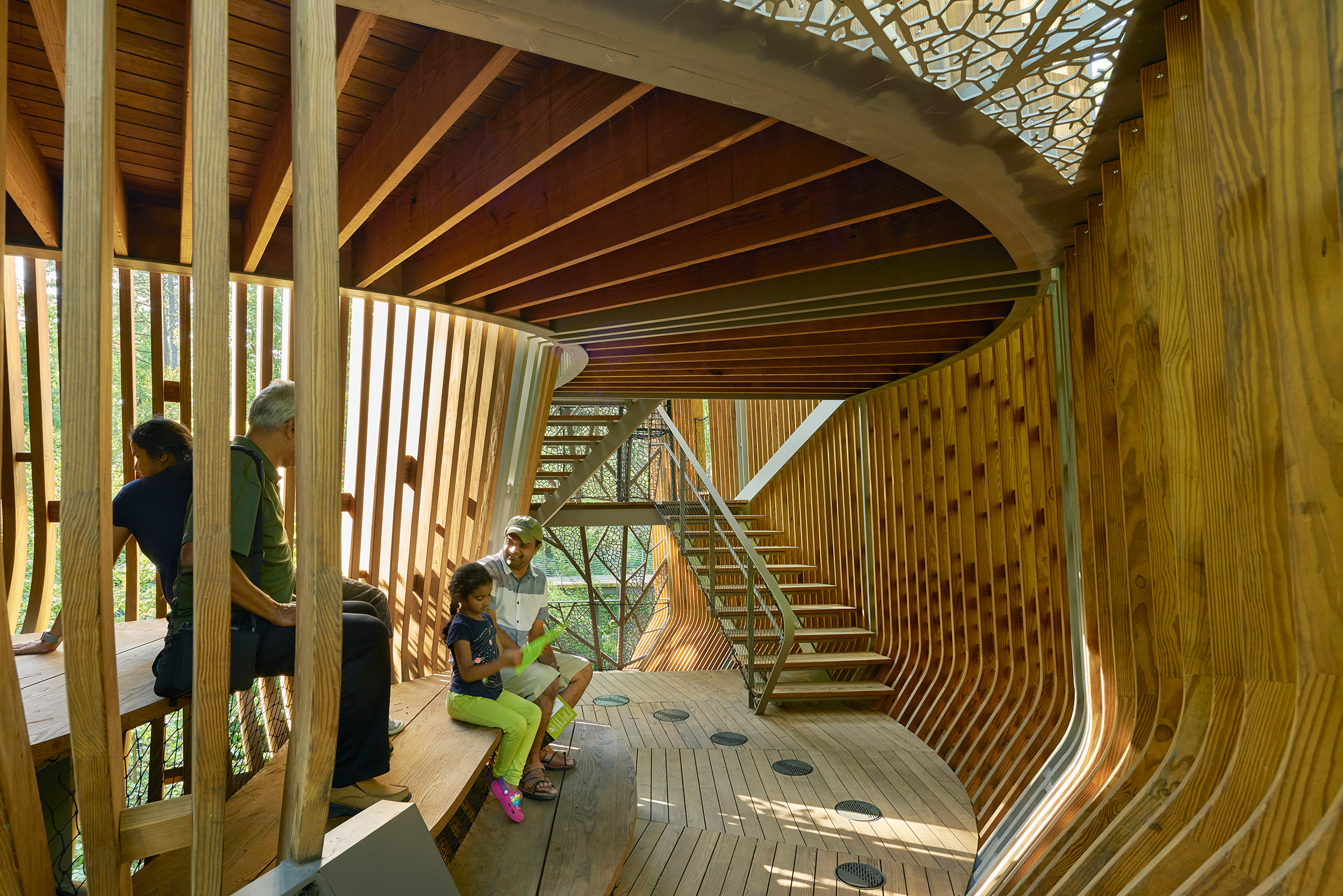 Other projects by the firm include an expanded studio and guesthouse that features ample use of metal, and the revamp of a ranch-style dwelling, which included new facades wrapped in cedar and weathering steel.

In recent months, the firm worked with Brand Bureau to complete The Holler – a venue for co-working, dining and playing shuffleboard.

Photography is by Timothy Hursley.