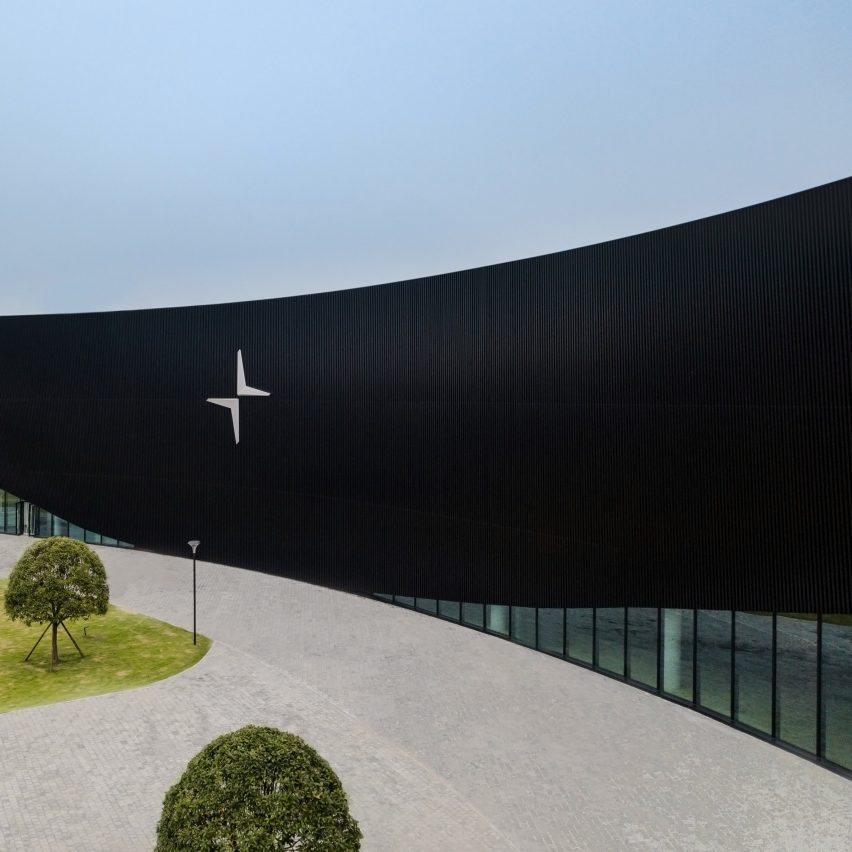 A long curved wall clad in black steel encloses this electric-car factory that Snøhetta has created in Chengdu, China for the automotive brand Polestar.

Completed in 2019, but revealed in new photos released by Polestar, the production facility also functions as a visitor centre for the Swedish company’s customers in China.

Snøhetta chose black steel cladding for the building to set it apart from its surroundings, while its undulating form pays homage to the dynamism of the car industry.

“The curve as an element acts as a structuring gesture, creating associations to the movement and dynamics of the car industry and car racing, tying the landscape and the building together,” Snøhetta explained.

The metallic facade is disrupted only where it lifts to reveal large glass windows and doors, which mark the building’s entrance points and maximise natural light inside.

Steel is also used throughout the building’s structure and interiors, in tandem with concrete. These materials were chosen for their robustness and durability.

Inside the Polestar Production Facility, Snøhetta has incorporated an extensive factory space, alongside offices, canteens and a visitor centre.

Workspaces throughout the building are designed to be open and shared by employees from different departments to facilitate “dialogue and the exchange of knowledge”.

“The focus of the design has been to create a production facility that is bright, spacious, and open for everyone,” said Snøhetta.

“Being within such close proximity to each other, this stimulates interaction and collaboration across disciplines,” it explained. “The new headquarter aims to enable new ways to align creative visionary processes with technical production requirements, and the layout sets a new standard for inclusive fabrication facilities.”

Uniting the different spaces at the heart of the building is a glazed atrium, which also doubles as a shared courtyard and gathering space for all employees.

There are also meeting spaces placed outside the building to make the most of the green landscape that surrounds it.

Another distinct feature in the Polestar Production Facility is the “visitor loop”, which is a mezzanine level with views into the factory and different departments.

According to Snøhetta, it is dedicated exclusively to potential customers, companies and students who are visiting the building to find out more about Polestar.

Throughout the building, the interiors are dominated by light colour palettes, designed to deliberately contrast the building’s black exterior.

This is most prevalent in the main production area, which is lined with bright white walls and large windows that flood the space with natural light.

The building is also powered entirely by renewable energy, which Polestar says is a reflection of the company’s goal of becoming climate neutral.

Snøhetta was founded in Norway in 1989 by architects Kjetil Trædal Thorsen and Craig Dykers. Today, it functions as an international architecture and design studio.

The studio’s focus on providing the Polestar Production Facility with renewable energy supply echoes its efforts to make all its buildings carbon-negative within 20 years.

Other recent projects by the studio include a carbon-negative office in Telemark and a timber and a plant-covered workplace in Austria.

Photography is courtesy of Polestar.