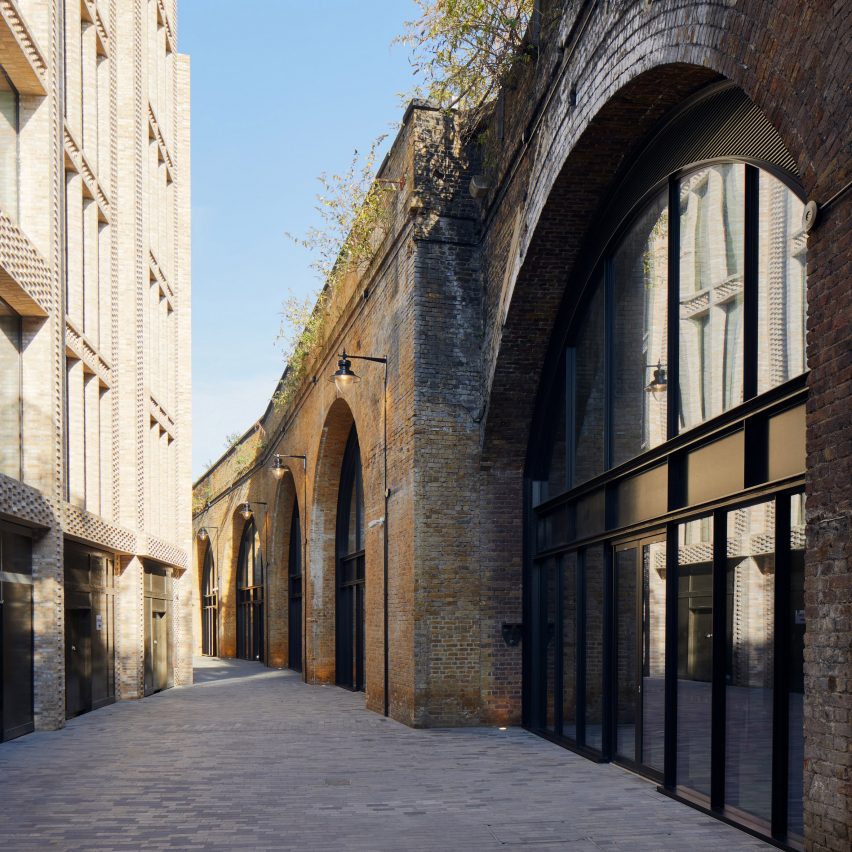 A brick-lined arcade has been inserted beneath an existing railway viaduct at the Borough Yards shopping and dining district in south London designed by local architecture studio SPPARC.

Set to open in Spring 2022, the social, cultural and shopping hub created by SPPARC with real estate company MARK has transformed an area between Borough Market and the River Thames.

The mixed-use development incorporates existing buildings alongside newly constructed spaces that reflect the surrounding Victorian architecture, set in the shadows of Southwark Cathedral and The Shard by Renzo Piano.

“These splendid industrial structures weave and stitch history and heritage together with contemporary architecture.”

Several disused arches situated beneath an existing railway viaduct have been transformed into an arcade that leads south from Clink Street. The arcade connects the two ends of the new district and is lined on either side with commercial units. Shops and restaurants will occupy the arches, which feature large windows set within black metal frames that nod to the area’s industrial heritage.

SPPARC was able to retain the facades of several former warehouses, which are incorporated into two new six-storey office buildings operated by The Office Group.

“Inspired by Victorian terraces bounding its Stoney Street site, the long elevation of the largest new building incorporates a series of folds that respond to the rhythm of the townscape whilst reaffirming the re-emergence of the location,” SPPARC added.

A new public square connects the store on the corner of Stoney Street with the neighbourhood’s first-ever cinema, Everyman Borough Yards. A neon artwork by FRA Creative illuminates the square and guides visitors towards the arcade.

SPPARC is an architecture studio founded in 2006 by Trevor Morriss. Elsewhere in London, the studio is currently developing a museum surrounding the Golden Hinde – a full-size replica of the of Francis Drake’s Golden Hind galleon.

The photography is by Ed Reeve.