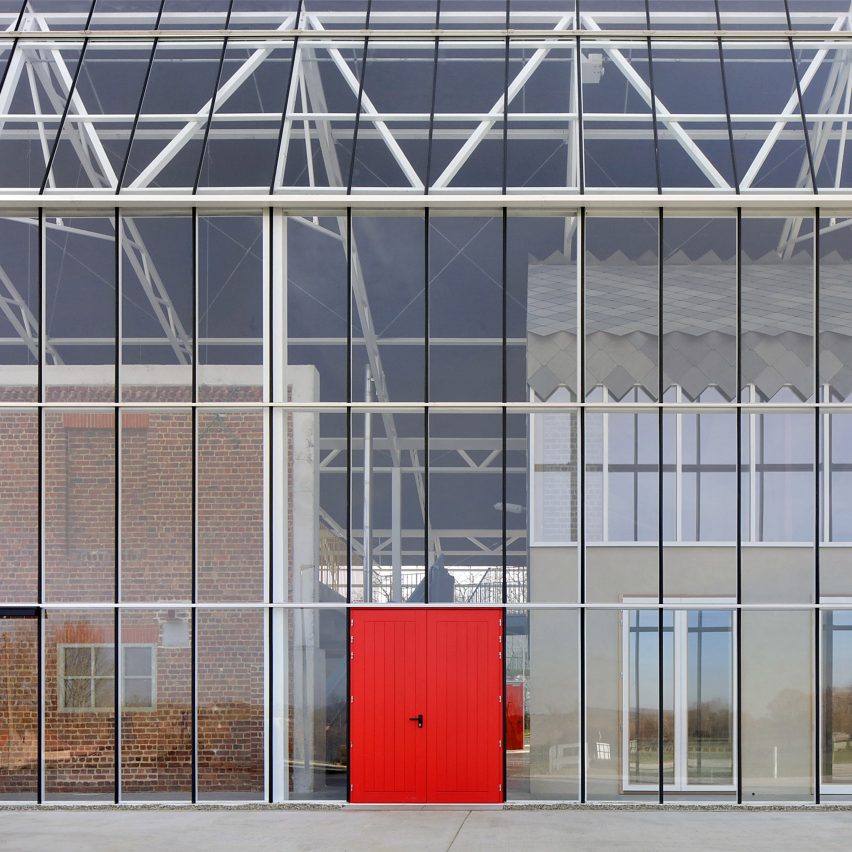 Jo Taillieu Architecten has transformed a former fruit farm in the Belgian village of Gooik into an educational centre featuring refurbished agricultural buildings enclosed within a greenhouse-like structure.

The Paddenbroek Education Centre was established by the municipality of Gooik to educate visitors about the countryside, in particular the surrounding Pajottenland region.

The facility’s mission is both educational and ecological and focuses on the relationship between nature, agriculture, tourism, recreation and regional identity.

Jo Taillieu Architecten was approached to oversee the renovation and extension of a derelict fruit farm to create a series of multifunctional spaces that can be used for recreational activities.

The architects chose to preserve some of the farm buildings to maintain a connection with the site’s past. Parts of other buildings were also salvaged and reused in the new spaces.

The unheated greenhouse-like structure built around the old brick buildings is intended to evoke the region’s agricultural vernacular.

“The old farmhouse underwent a metamorphosis whereby the farmhouse was dismantled and a volume of glass and steel was constructed all around to maximise the flexibility and shared use of space,” said Jo Taillieu Architecten.

The glazed structure follows the size and orientation of the existing buildings, with the roof height decreasing from north to south in relation to the volumes it contains.

The saw-tooth profile features north-facing vertical glazing and sloping south-facing roofs. These are partially covered in photovoltaic panels to generate energy whilst also protecting the interior from direct sunlight.

Paddenbroek Education Centre’s open interior space is planned as a gathering place for visitors and as a starting point for hiking and cycling tours. It contains a cafe and reception desk operated by the local tourism office.

“The greenhouse serves as an unheated in-between space,” the architects added. “The charm of the building is the layering of the old and new structures and communication with its surroundings by making a design in which every facade has its own perspective on the surroundings and vice versa.”

The preserved farmhouse building now contains offices on the ground floor, with meeting rooms on the level above.

Ornamental mantlepieces salvaged from the existing buildings take pride of place in the new rooms.

The building’s upper floor and roof are wrapped in grey fibre-cement slates laid in a diamond pattern.

The same grey slates are used for the roof of a smaller brick building that extends through the glass facade to form a protective canopy over a restored loam oven.

A small, circular concrete room beside the central staircase contains a pellet-fired stove, which is used for the few heated spaces within the building.

Architect Jo Taillieu founded his eponymous office in 2004. He went on to collaborate for several years with Jan De Velder and Inge Vinck on projects including a house with a tree bursting through its roof.

Photography is by Filip Dujardin.