British architecture practice Studio Carver has completed a timber and glass extension to a house in north London that was inspired by traditional wooden conservatories found in the American Midwest. 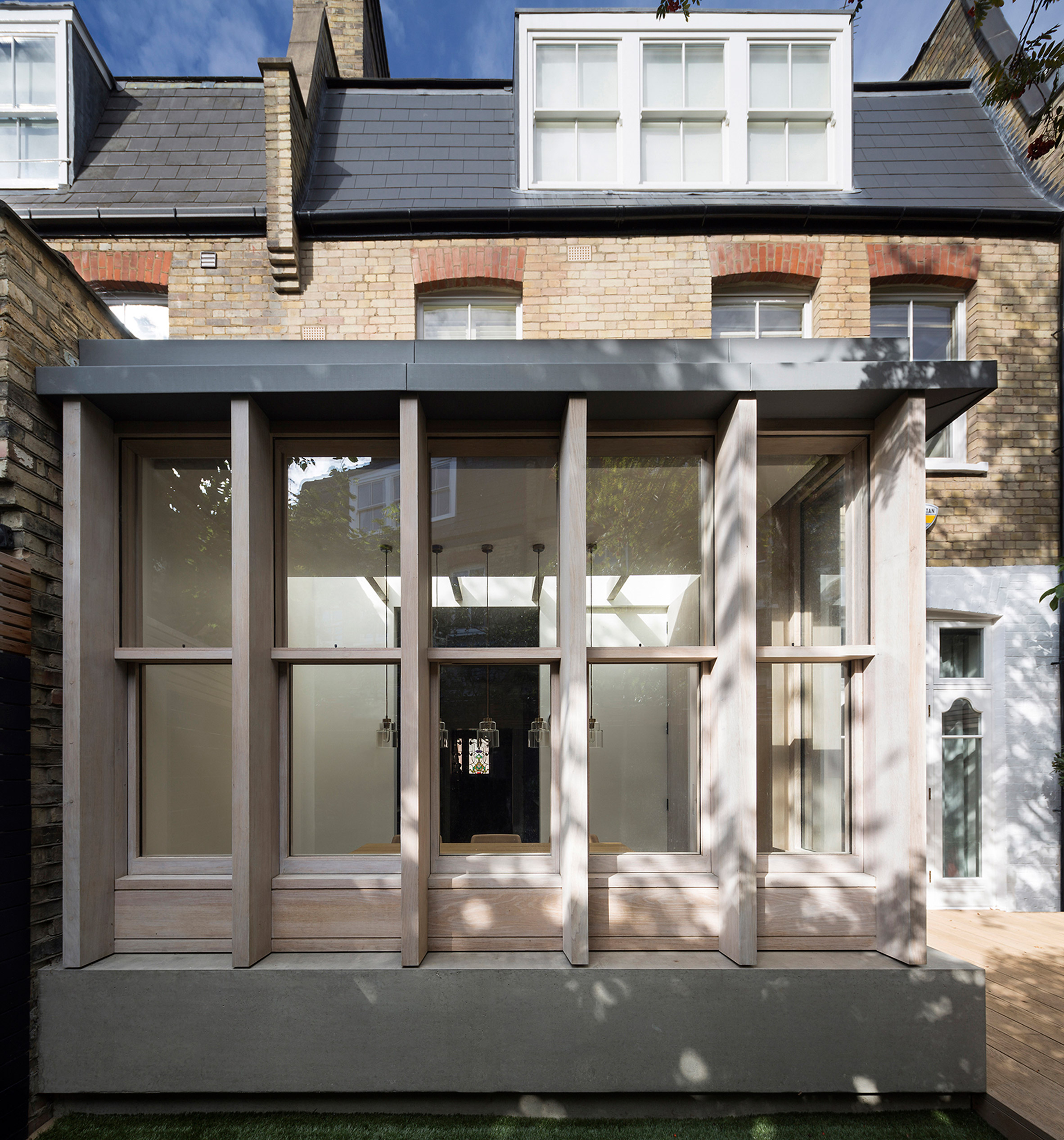 Studio Carver designed the extension for an Anglo-American family who wanted to improve the living spaces of their Edwardian house in Belsize Park.

The compact addition to the rear of the building replaces an existing conservatory and contains a dining area with improved levels of natural light and privacy.

The clean-lined contemporary design and muted material palette of exposed concrete, zinc cladding and white-oiled oak creates a subtle contrast to the London stock brick and white-painted details of the original house. 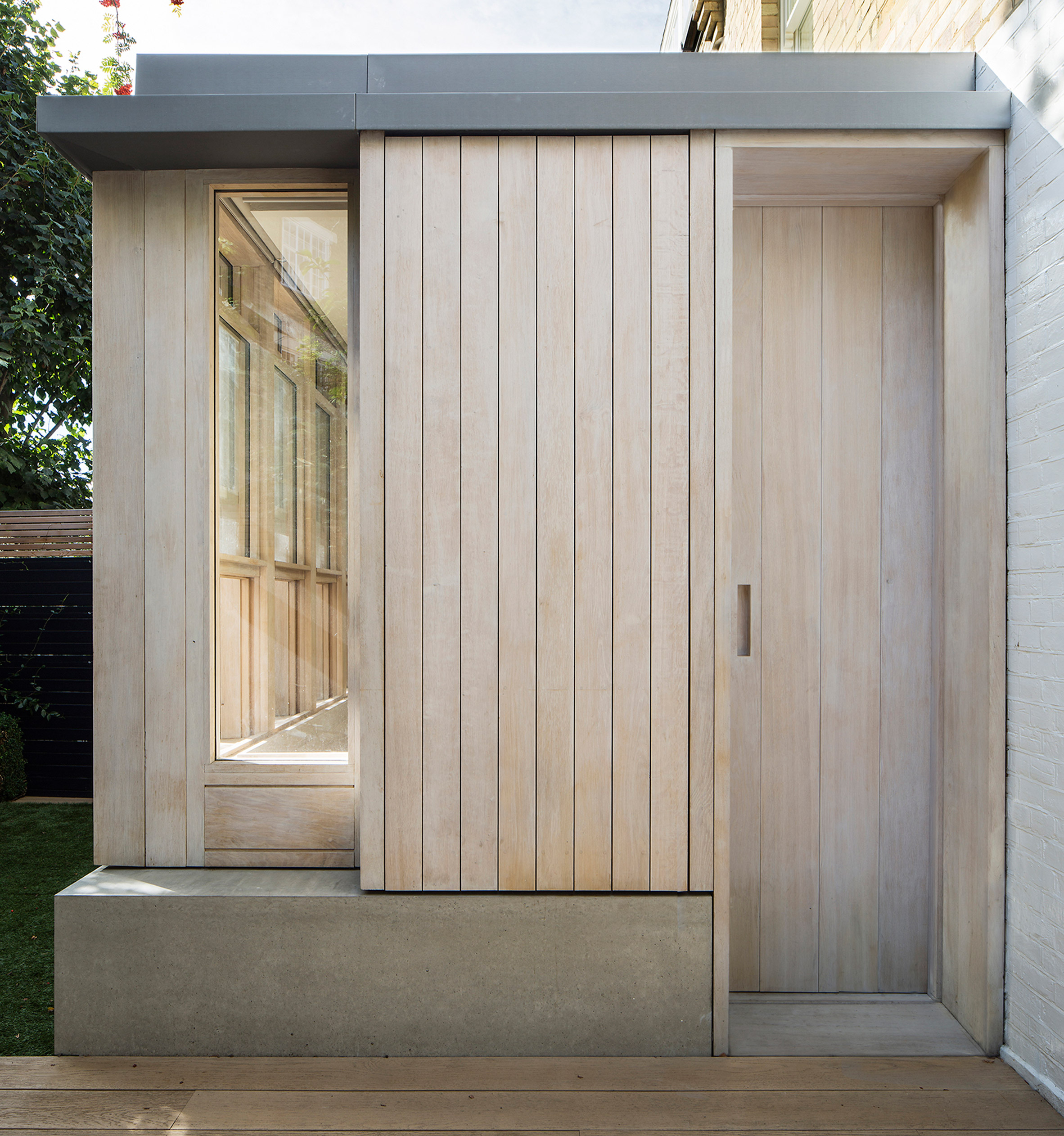 “The window mullions and intersecting timber frames of American conservatories establish a strong vertical rhythm that we drew inspiration from for the Belsize House,” architect Keith Carver told Dezeen.

“We exaggerated this rhythm and verticality with the introduction of deep oak fins set between the windows.” 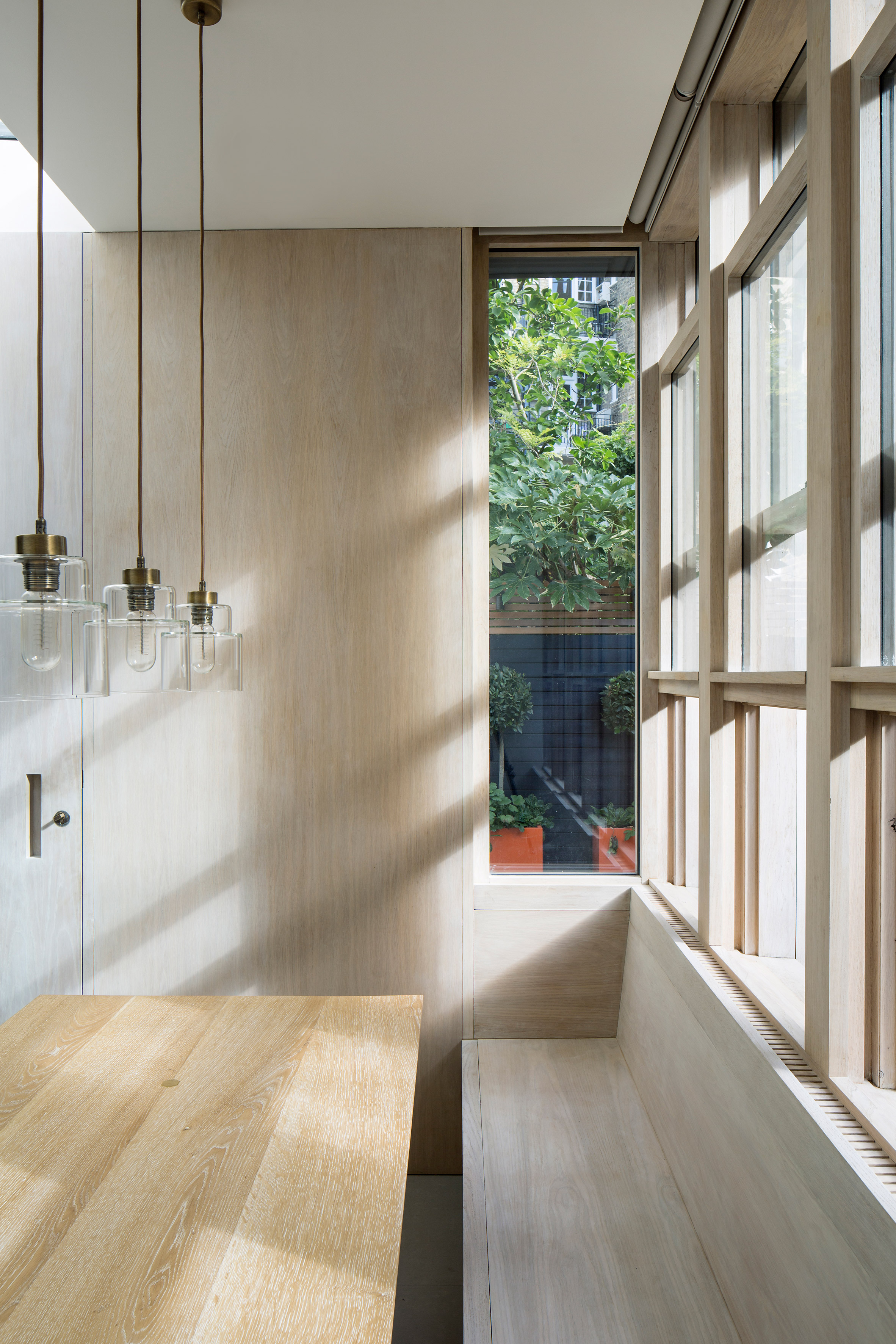 A concrete plinth supports the extension’s timber structure, which was developed in collaboration with Devonshire-based carpentry company Emanuel Hendry.

“This collaboration early in the design process gave us the ability to test and prototype ideas in order to push the limits of the material,” Carver added. “As a result, we achieved a more refined aesthetic and greater integration of all aspects of the design.” 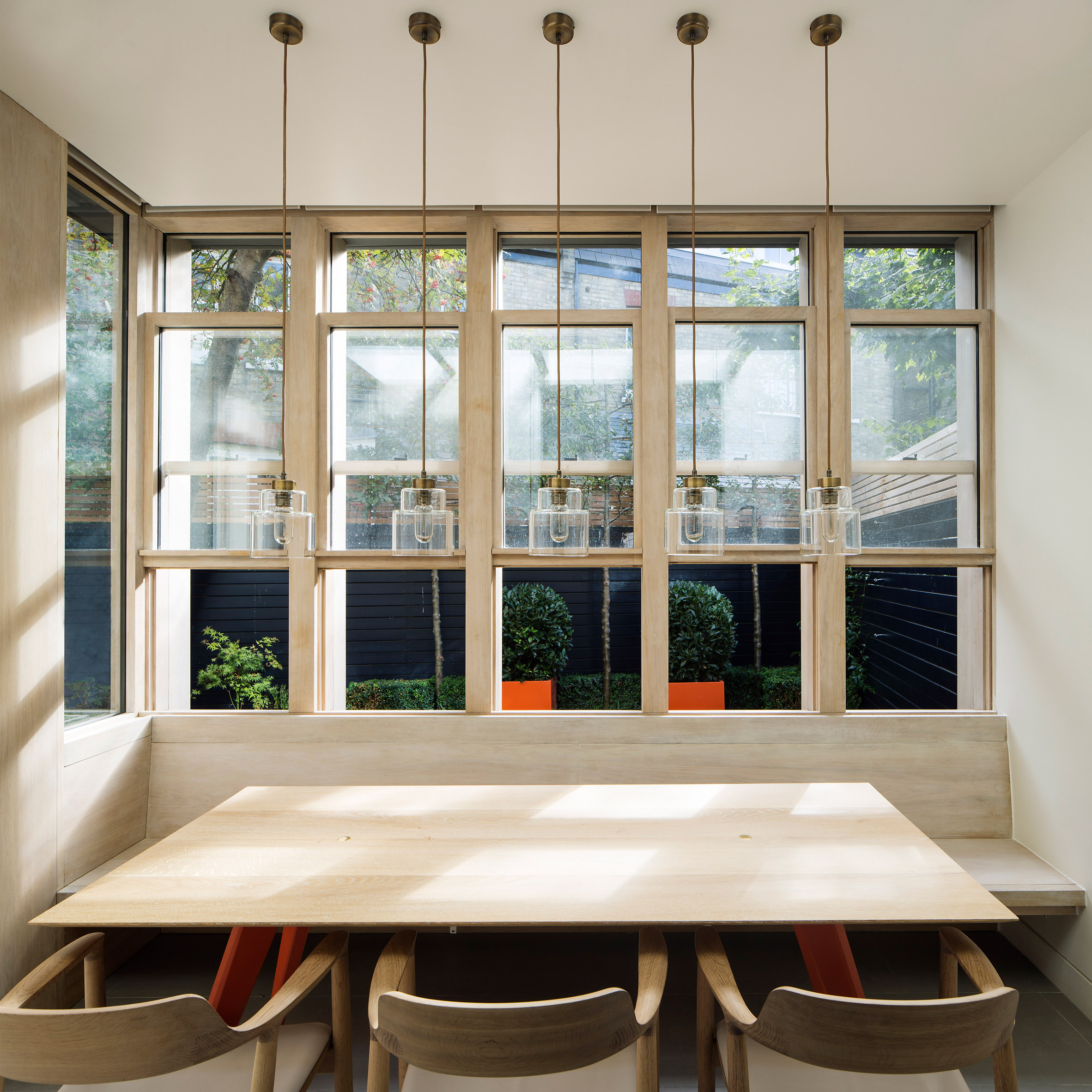 The frame was designed and erected off site before being transported to the property and re-assembled, therefore reducing construction time and costs.

The new conservatory contains built-in bench seating that spans the rear elevation and allows the family to lean against the glazing and look out at the garden. 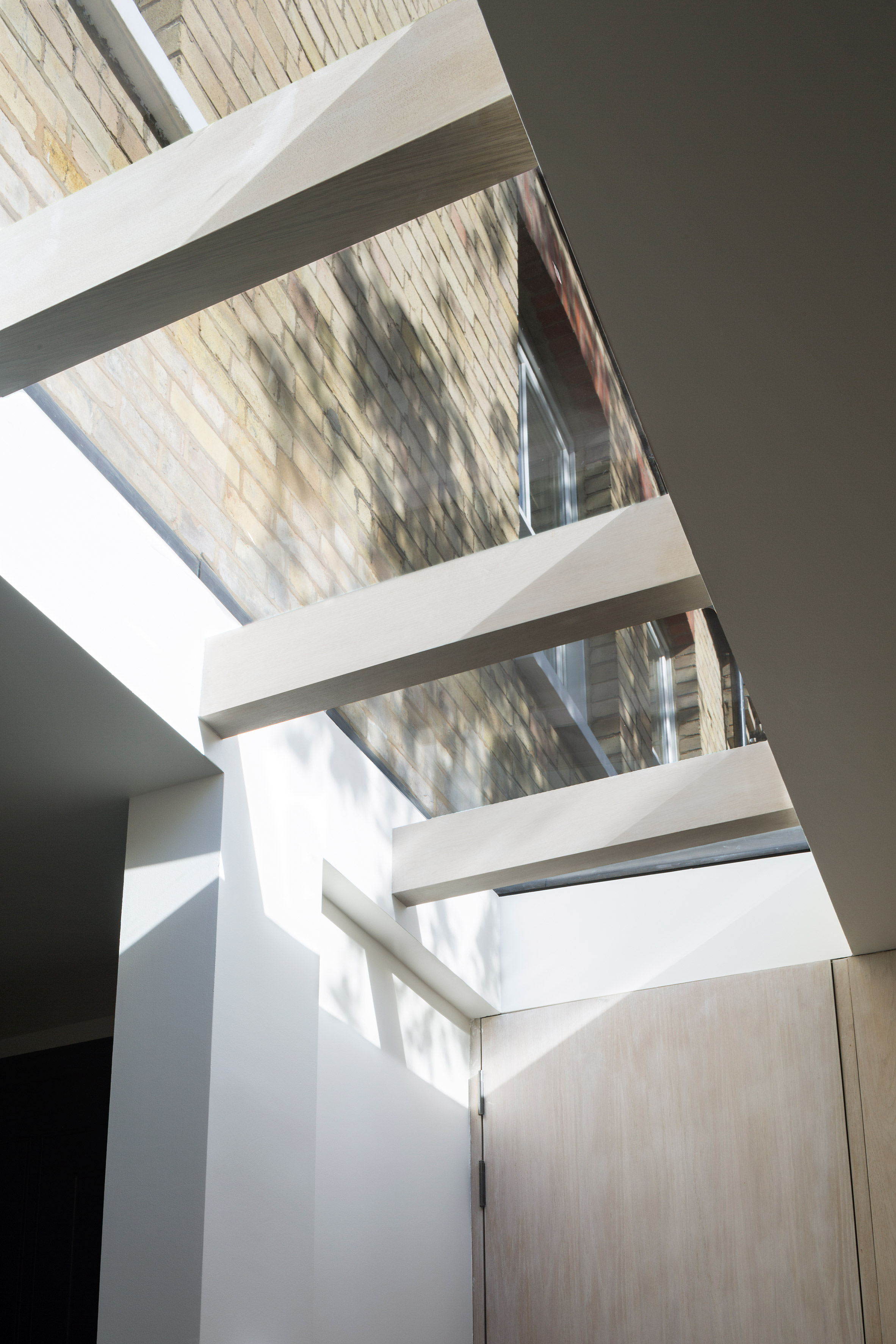 Deep oak fins between the windows frame the views outwards while preventing the space from being overlooked by neighbouring properties. 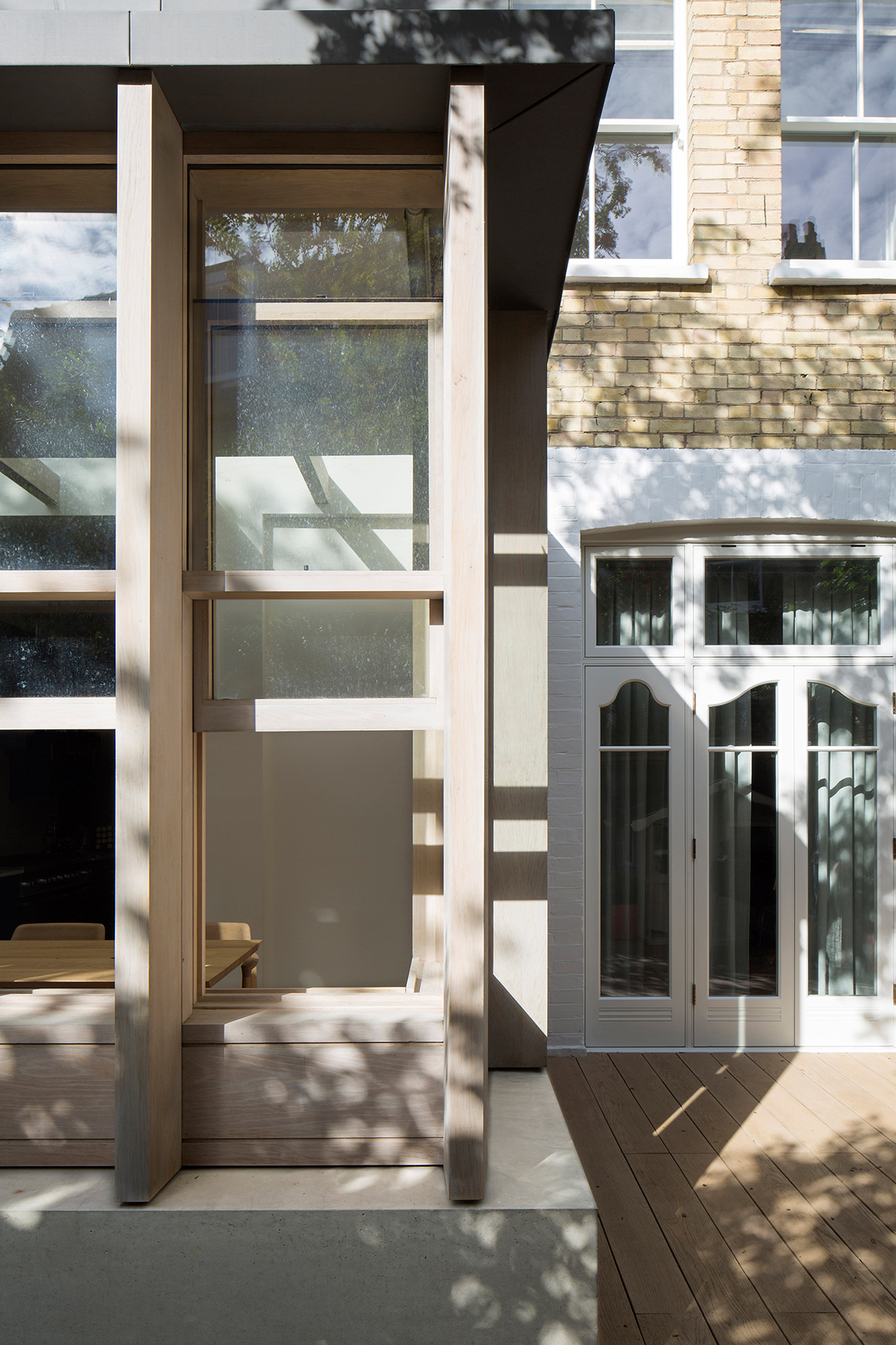 The two-metre-high sash windows ensure plenty of daylight enters the space and echo the vertical rhythm of the Edwardian building’s French doors.

A skylight between the extension and the existing house creates a sense of separation between the old and new parts of the building, as well as introducing more natural light into the room.

A side door featuring handles subtly recessed into its wooden surfaces connects the interior with a decked area that extends out towards the garden.

Photography is by Richard Chivers. 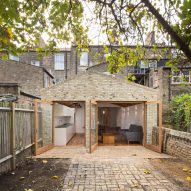