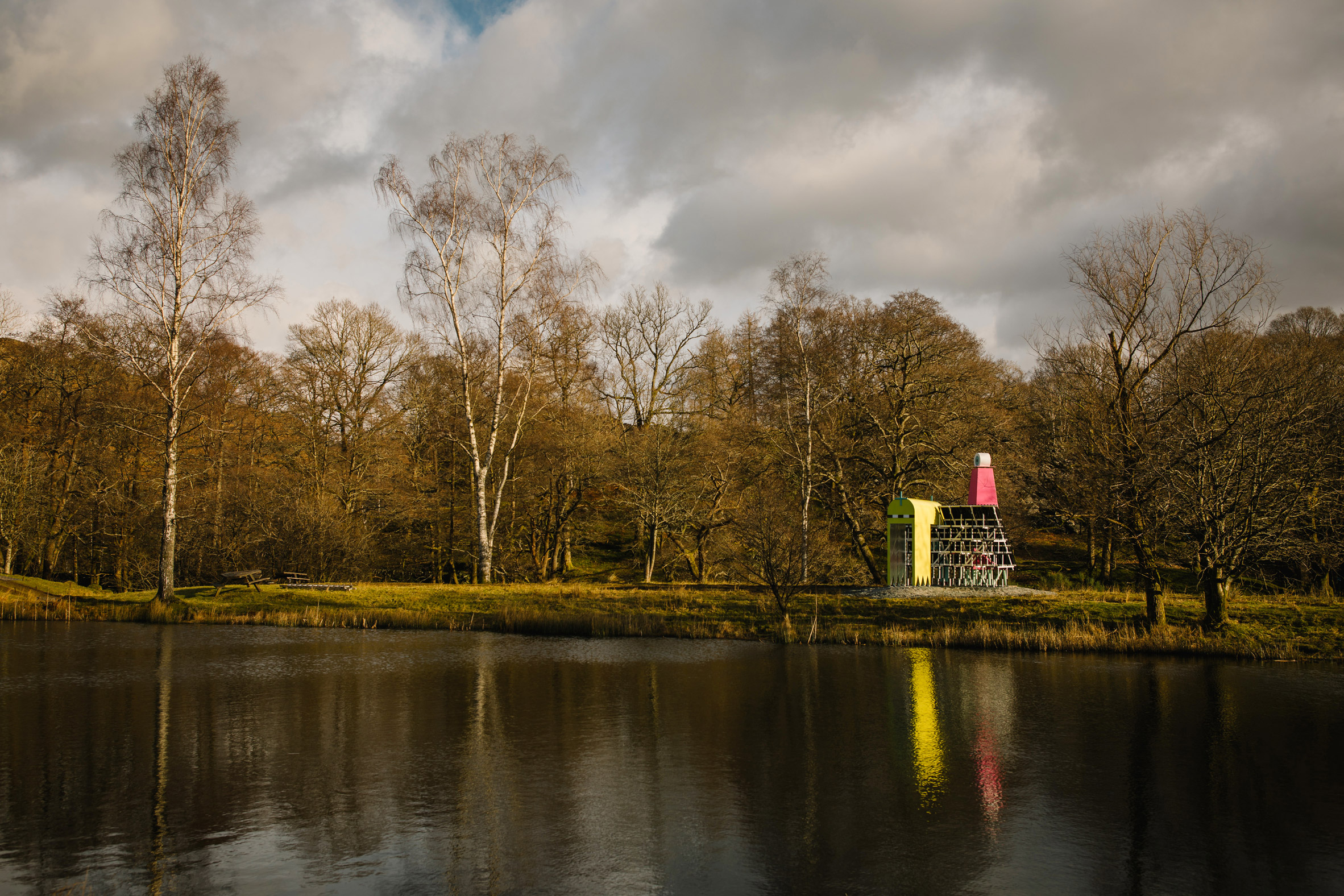 The studio founded by Graham Burn, James Crawford and Alex Turner, developed the proposal in response to an open call organised by Lakes Culture, the body responsible for promoting tourism and cultural activities in the area.

As part of the Lakes Ignite 2018 initiative, the organisation called for projects that celebrate the Lake District as a “cultural landscape”. Studio Mutt’s response references how people have historically interacted with the landscape, both culturally and physically. 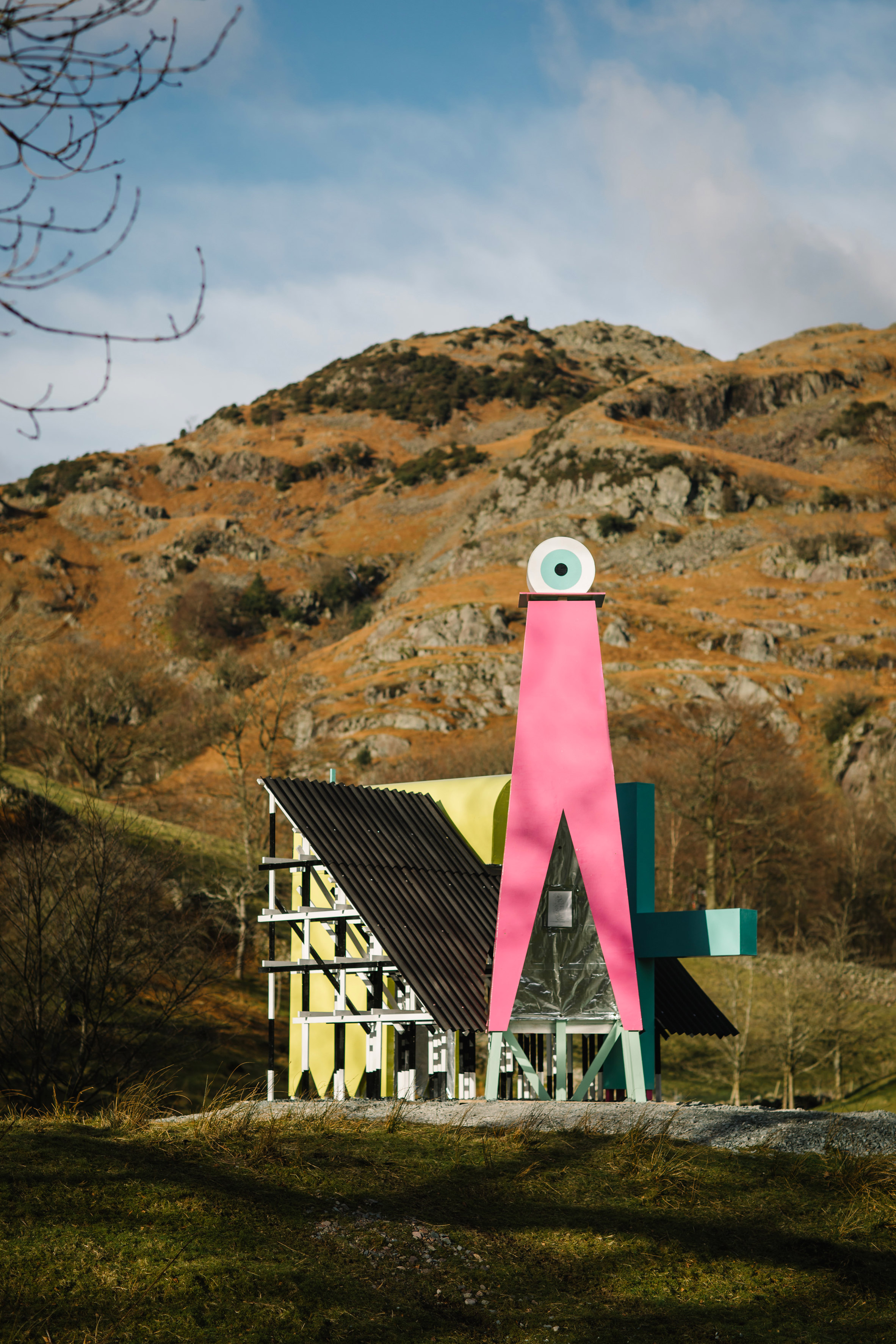 The main point of departure for the project was the Ordnance Survey maps, which have provided detailed information about the topography, buildings and roads of Great Britain since 1745.

The iconic and prosaically functional maps feature symbols, colours and design details that are a familiar part of Britain’s cultural heritage. 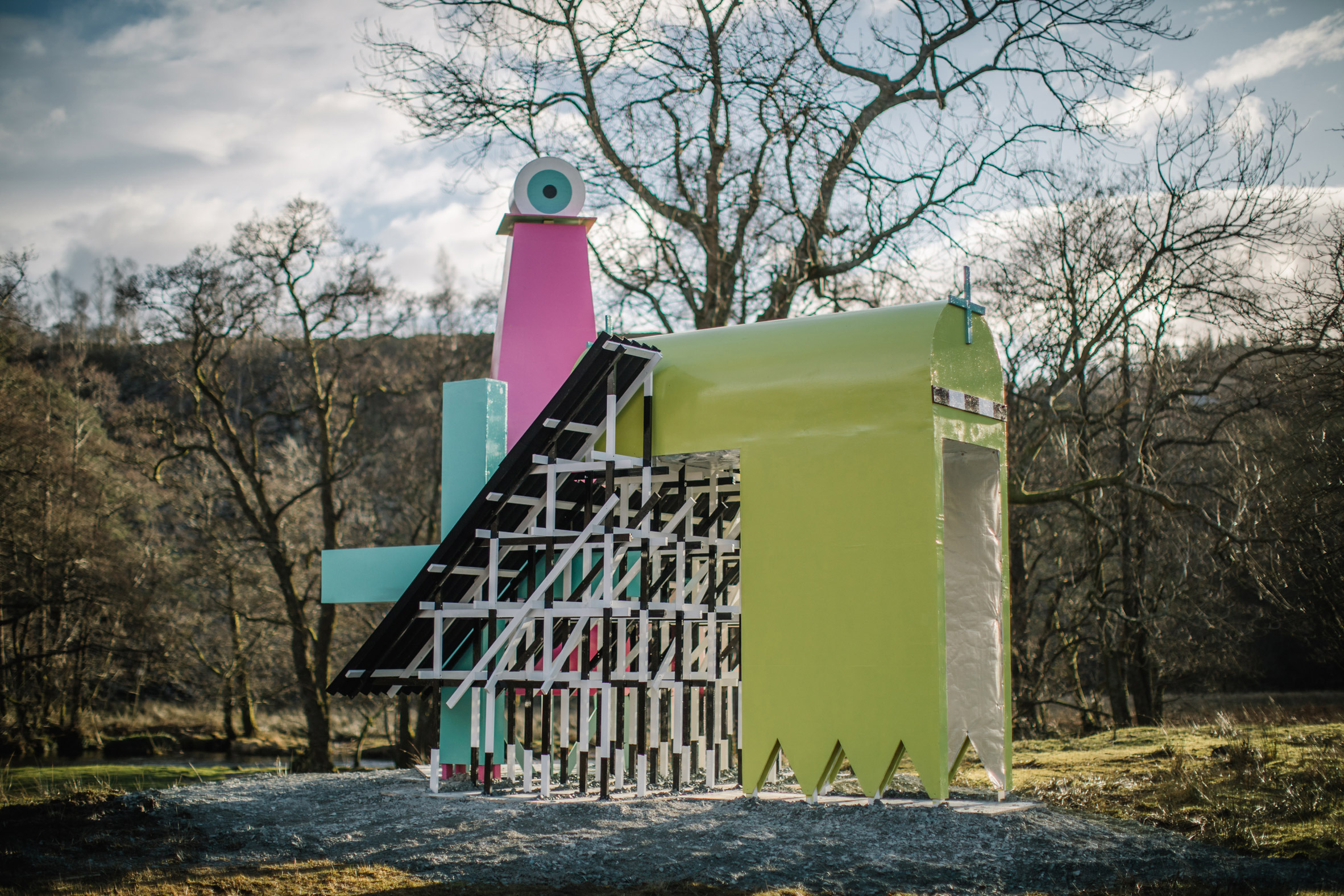 Mutt Studio wanted to translate some of these elements into a structure that celebrates the role the maps have played in enhancing the British population’s interaction with the landscape.

“The idea was to not only create an assemblage of OS references but to also create an intriguing and characterful structure which sat boldly in the landscape,” said the architects, “with a presence similar to a small isolated chapel – stranded within the vast rugged landscape.” 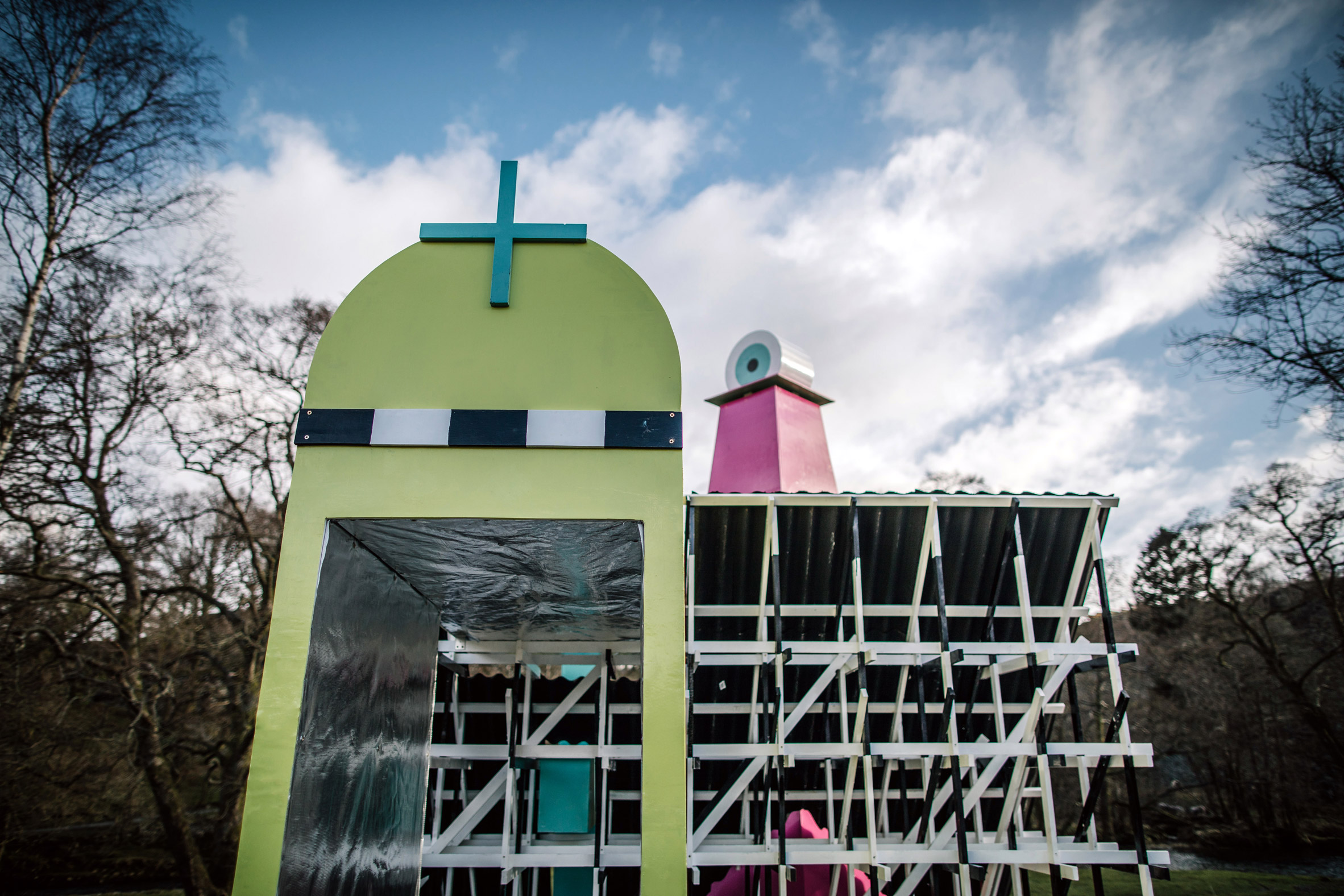 The Ordnance Survey Pavilion comprises a cluster of colourful forms compiled to form an interactive and semi-inhabitable sculpture situated behind a pub on the Langdale Estate.

The structure looks out towards the Langdale Valley from its setting on a riverbank between a small lake and the slate slag heap of an old quarry. 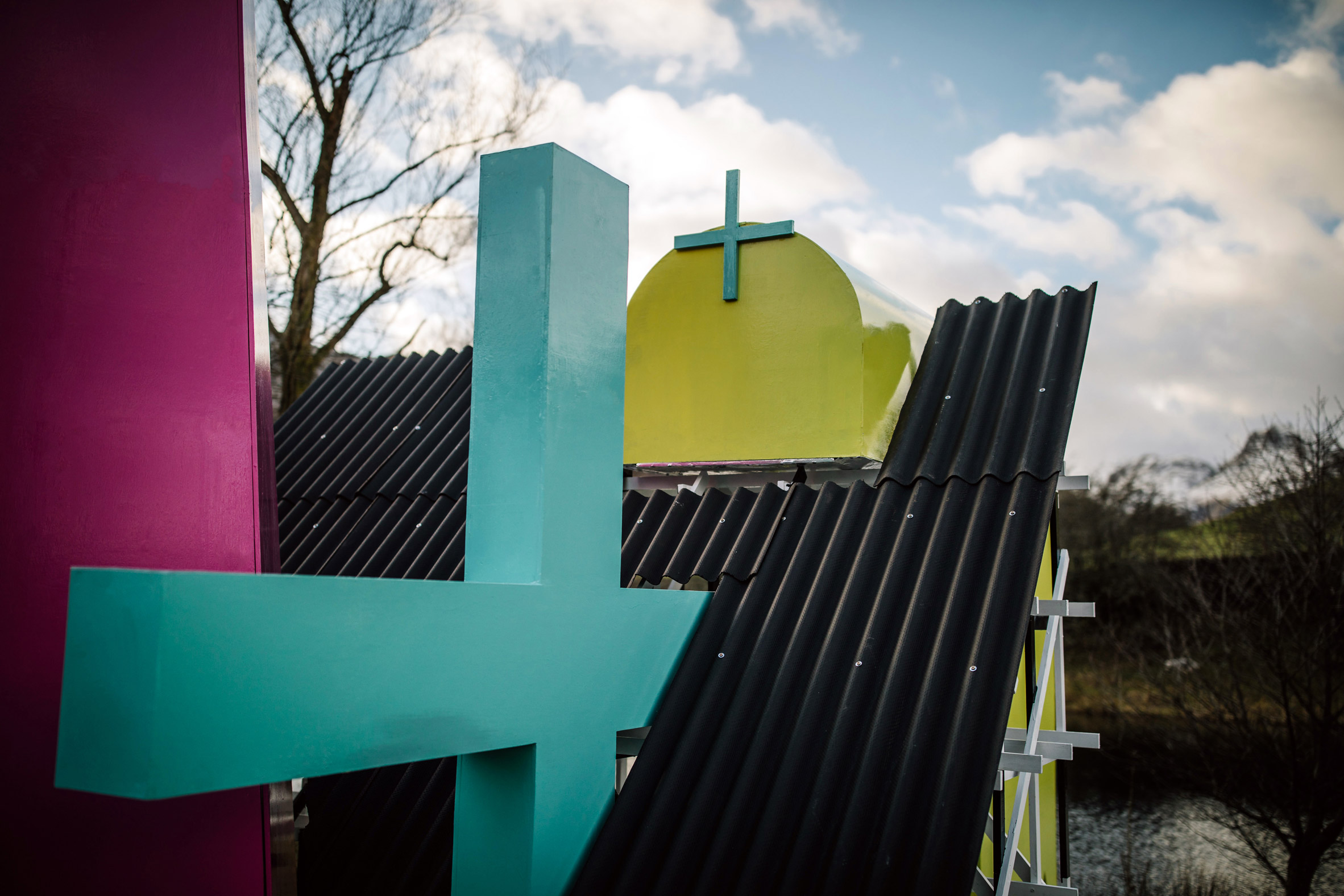 Mutt Studio chose to focus on a specific period of the Ordnance Survey’s history as the inspiration for the pavilion: the retriangulation of the country between 1935-1962.

During this period of roughly 30 years, the organisation undertook a laborious process of remeasuring the landscape, often using rudimentary tools and techniques that required a great deal of manual effort. 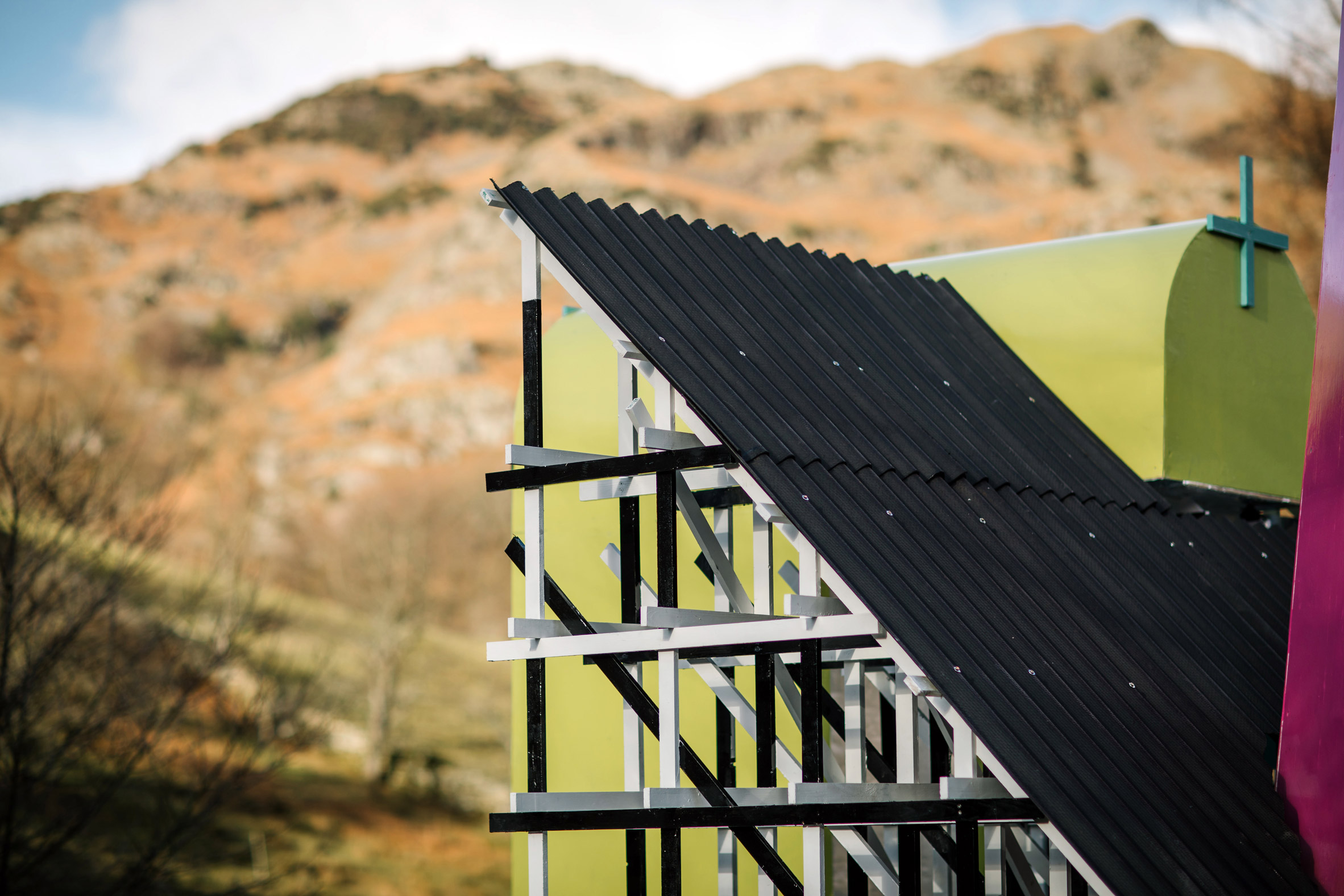 “The installation synthesises elements from this narrative of retriangulation through a collage of scenes and characters that form a peculiar pavilion, dedicated to the Ordnance Survey,” the studio added.

Various symbols from the OS maps are scaled up into three-dimensional forms that combine with other shapes and details informed by apparatus used by the surveyors during their work. 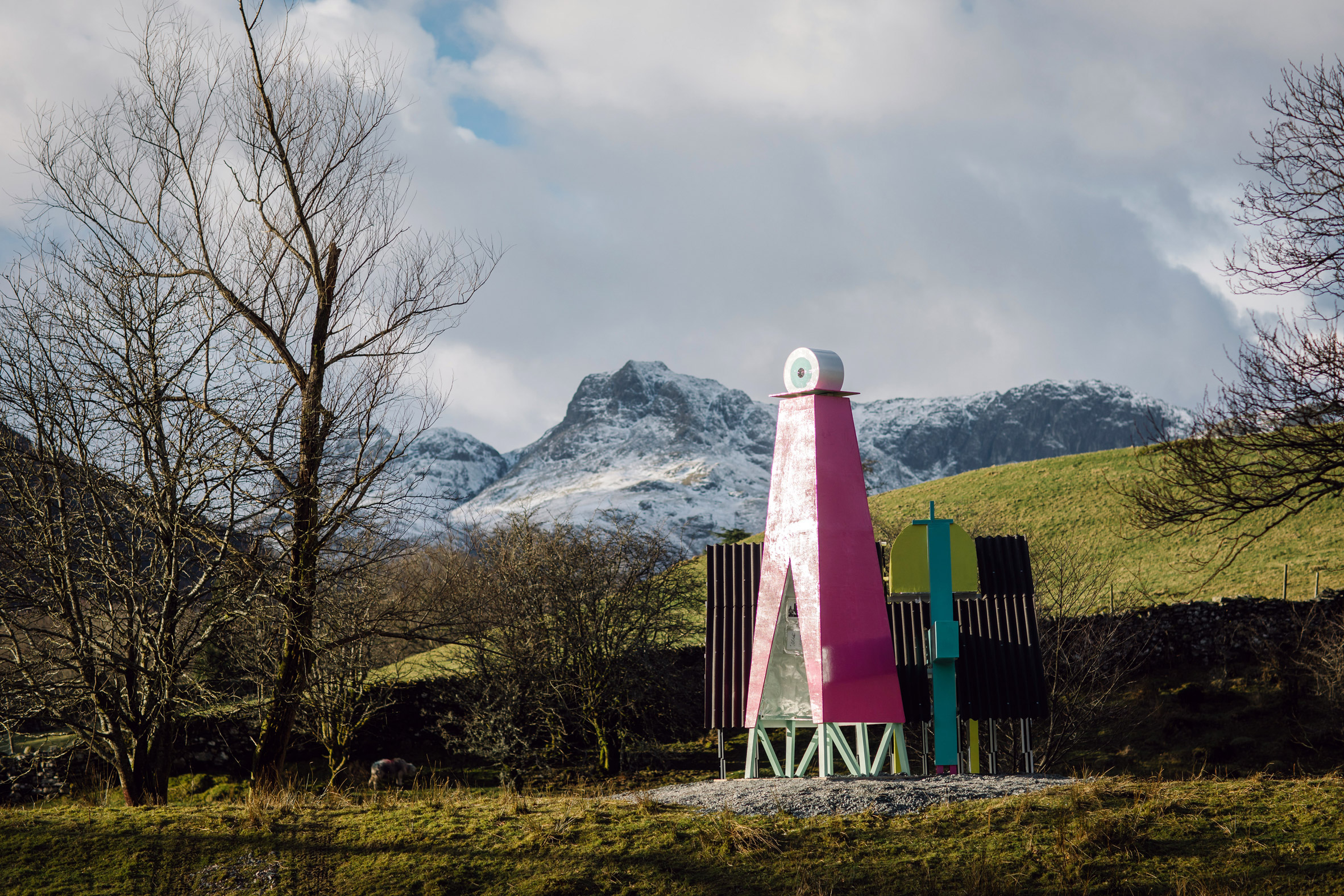 Black-and-white painted poles that form a framework with a sloping corrugated roof reference ranging rods used for measuring straight lines in the landscape, while a pink truncated pyramid evokes the trig points positioned on top of prominent hills and mountains.

Two of the structures provide inhabitable spaces that function as single-person art galleries displaying imagery relating to both the mapped landscape and the act of measuring. 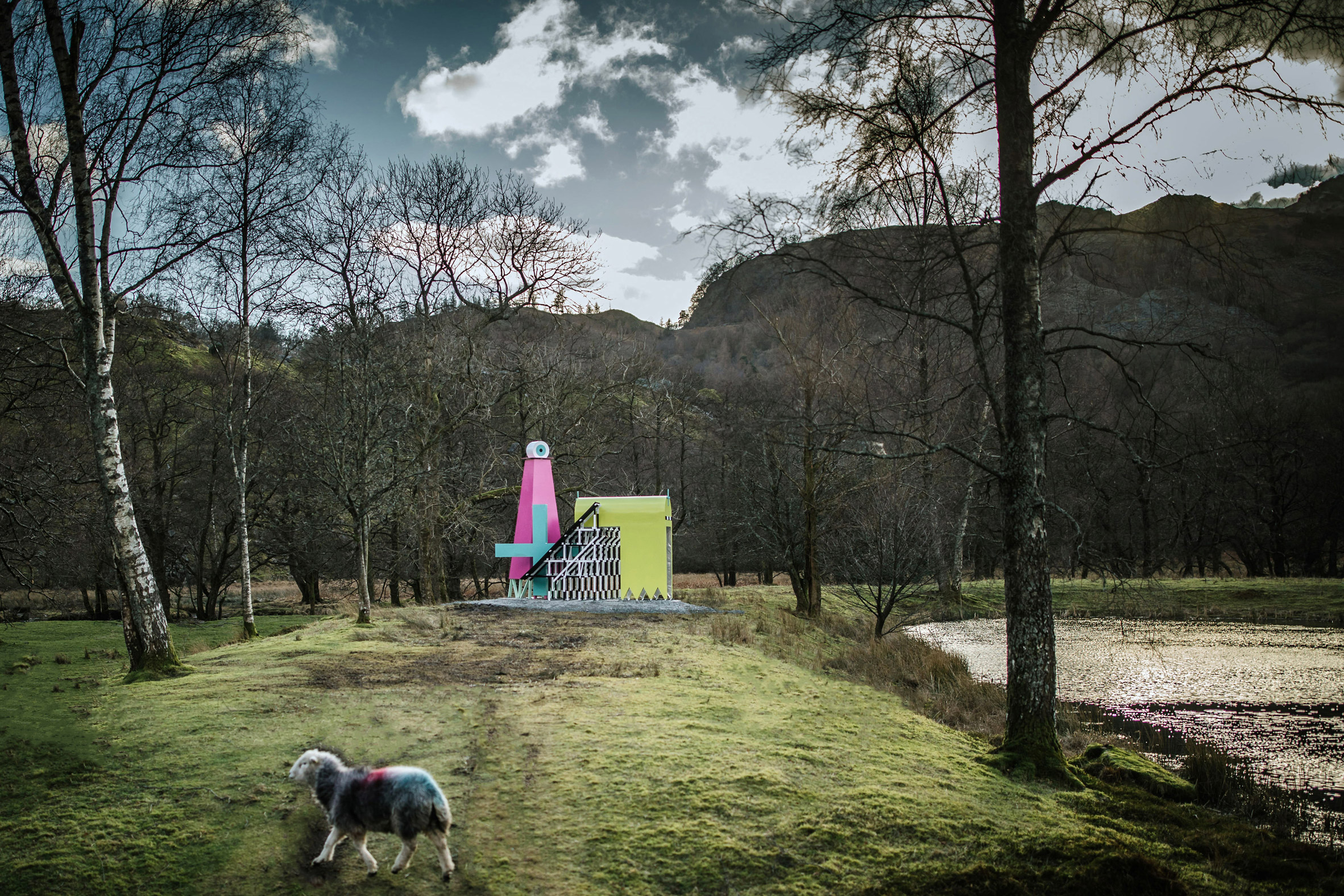 Nearby in northern England, Charles Holland has created a colourful parrot-shaped pavilion at the Fountains Abbey & Studley Royal.

Studio Mutt designed, fabricated and installed the pavilion, which opened to the public on 27 January. It will remain in place until August 2018.

Photography is by Steven Barber.