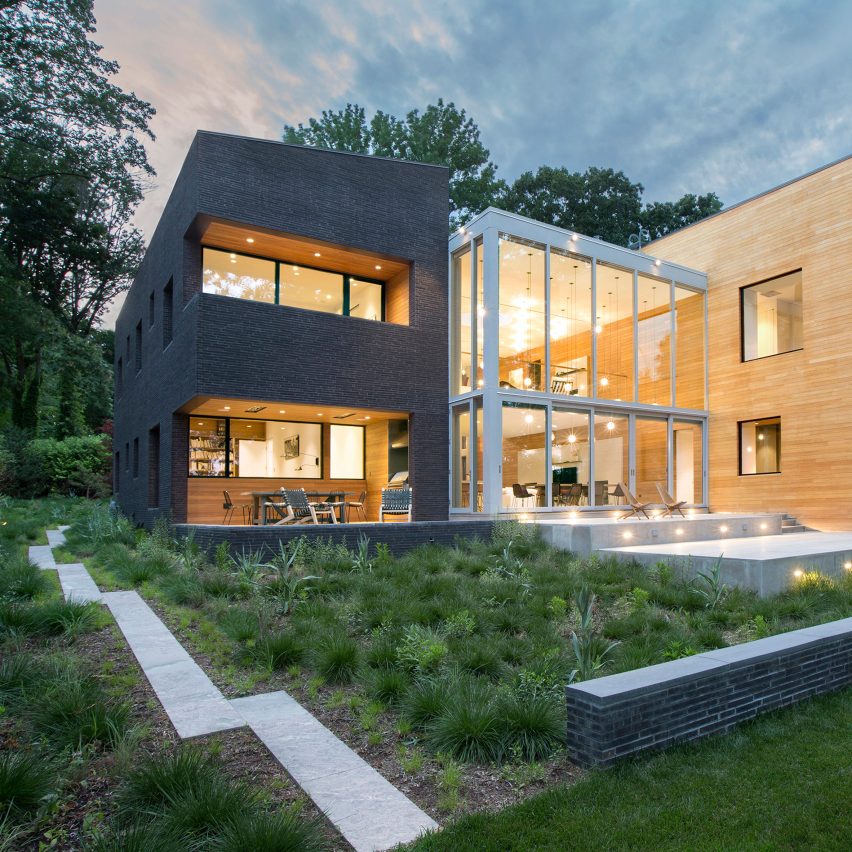 Sited on the shores of Lake Carnegie, the home is named “La Clairière,” which is French for “The Glade”. The name references the large glazed space in the middle of the home, which separates two volumes on either side.

Completed in 2021, the home encompasses 7,800 square feet (725 square metres) and was completed as a full-time residence for a couple that often hosts visiting family.

“Nestled within a forest of large oaks on the shore of Carnegie Lake, the house sits like a monolith, split down the center allowing the landscape to run through its core,” said Studio PHH founder Pierre-Henri Hoppenot.

The double-height central space contains the home’s main living areas, including the kitchen and dining room on the ground floor, which extend to the outdoors at the front and back of the home, and a mezzanine upstairs.

“With large window walls at each end, this light-filled ‘void’ connects back to the landscape on both sides, capturing the sunrise and sunset within the same space,” Hoppenot said.

Horizontal wooden siding defines the walls of this expansive space, lending contrast to the other two volumes, which are clad in dark, slender bricks.

According to the architect, the teak boards used in this space were salvaged from previous construction in Myanmar, meaning that the wood was sourced without cutting any trees.

A dramatic spiral staircase leads to the upper level, below several skylights that bring even more light into the space.

The other two volumes contain the home’s bedrooms, a home office, and a media room. Unlike the central space, the openings in these rooms are smaller punched windows, providing more privacy as well as offering framed views of the surrounding vegetation.

“The two dark brick volumes on either side are sunken into a deep landscape and emerge out of the ground,” said Hoppenot. “These host all the private spaces and were designed to provide peaceful & protected rooms that contrast the center.”

The interiors feature a range of neutral tones that complement the teak finish in the primary living space, including limestone flooring, while darker wooden slats forming an accent wall within the primary bedroom.

Other projects in New Jersey include the careful renovation of a mid-century home by Marcel Breuer, and a former propeller factory that was overhauled by New York studio Fogarty Finger.

The photography is by Tom Grimes unless otherwise stated.