New York firm Neil Logan Architect has retrofitted a warehouse in the city for streetwear brand Supreme, and put a free-standing skate bowl in the back.

Supreme Store Brooklyn is located in the Williamsburg neighbourhood, inside a former storage building for delivery trucks. 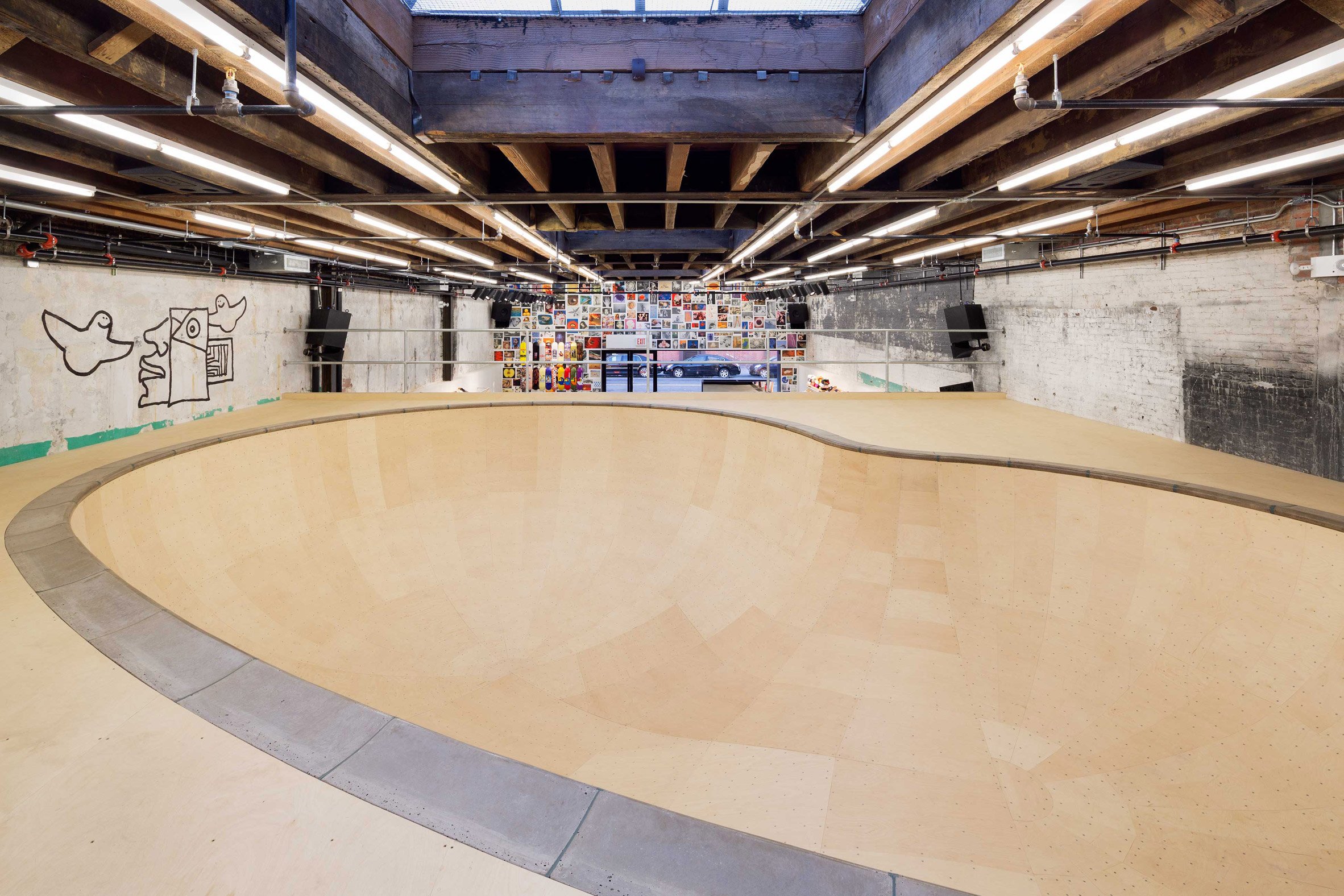 The store-cum-skatepark spans 2,938 square feet (square metres), with an open-plan retail area at the front, and a section for storage and skateboarding towards the rear. 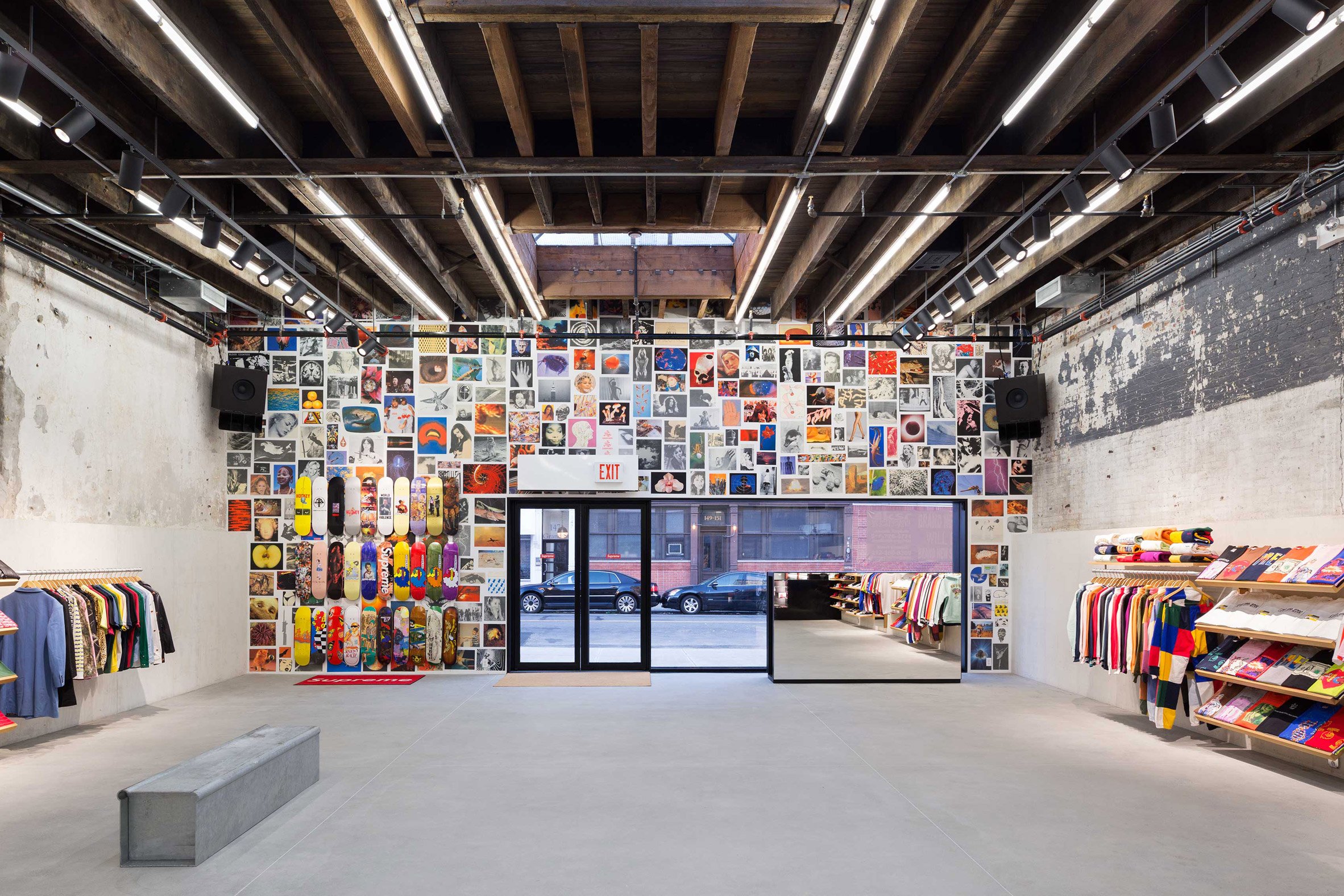 The free-standing skate bowl was designed by Steven Bladgett of American art collective Simparch and custom-built with Baltic birch plywood. The structure is supported by a series of red poles around its perimeter, providing enough height for skateboarders to drop into the bowl and for fitting rooms to be housed underneath. 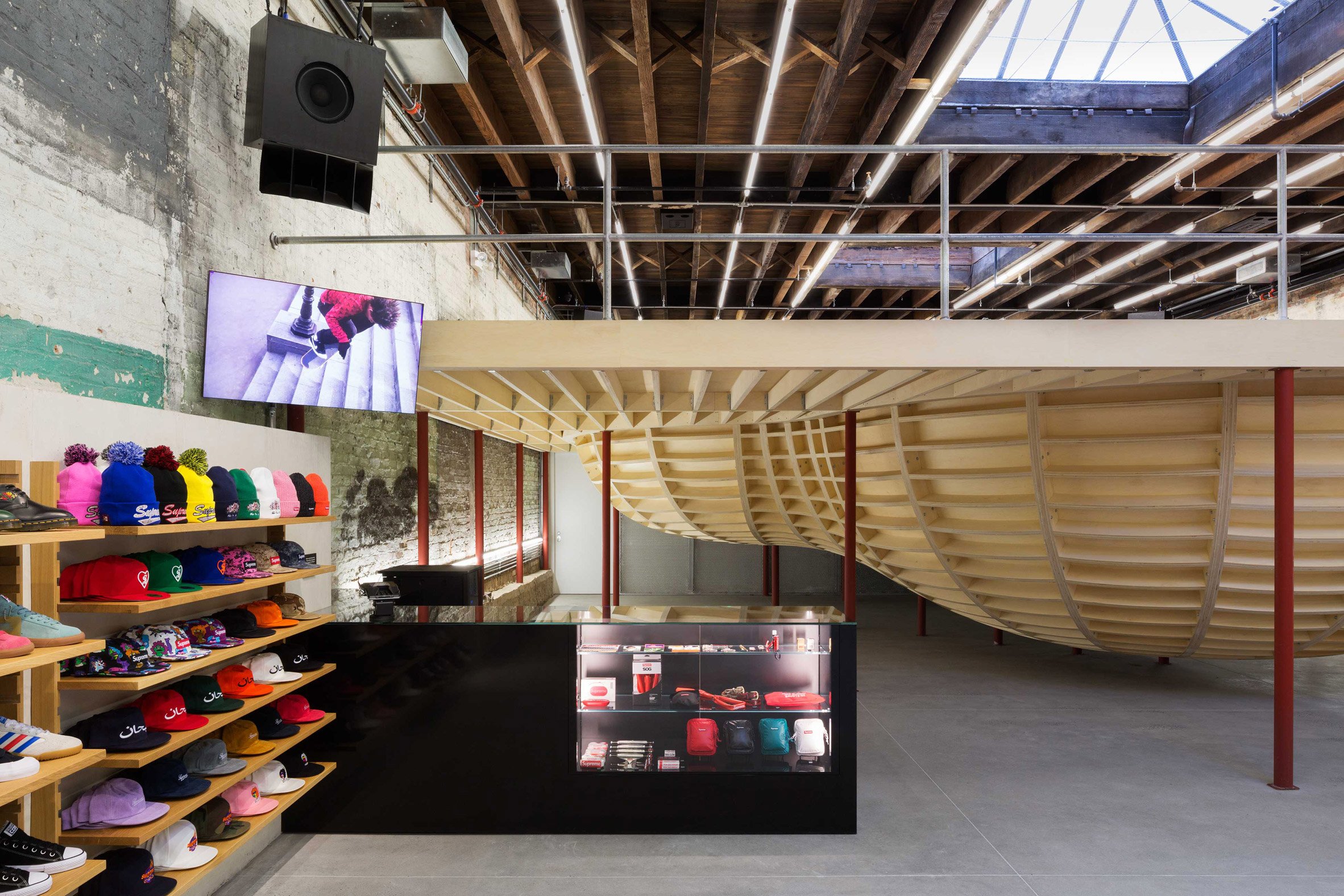 A popular piece of apparatus for performing tricks on a skateboard, the skate bowl was accidentally invented by architect Alvar Aalto in the 1930s with a swimming pool design, according to a US skateboarding magazine and a Finnish newspaper.

Last year, Supreme also updated some of Aalto’s classic modernist furniture – including the Stool 60 and the 400 Tank armchair – with new patterns and upholstery. 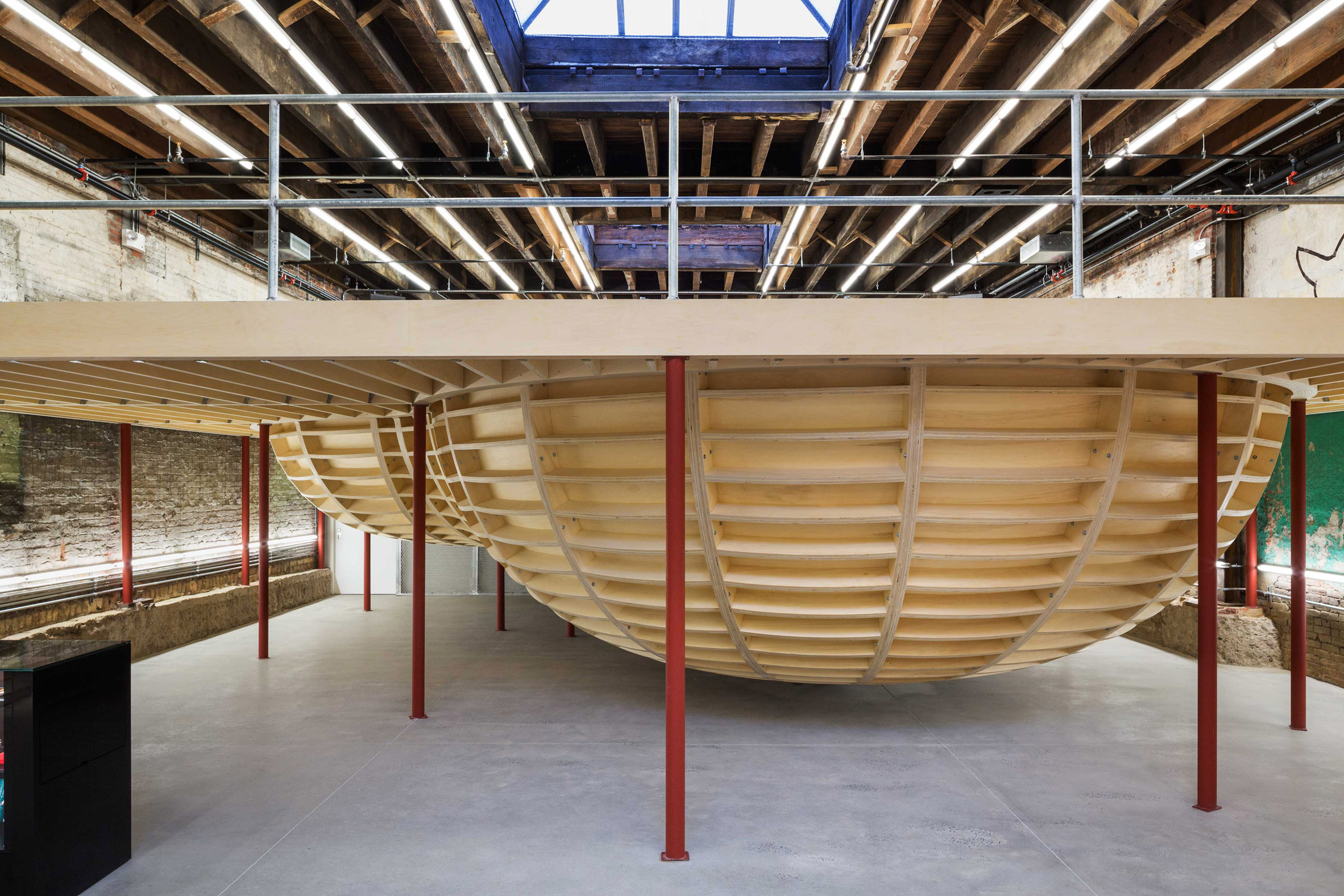 At the Brooklyn store, Logan replaced existing garage doors with a large piece of glass to create the new storefront. “Overt design features were suppressed in favour of the ‘almost nothing’ approach,” said the studio.

Brick walls inside were cleaned off, but the decades of paint layers were largely left intact. Other additions include concrete flooring and white concrete walls in the front retail area. 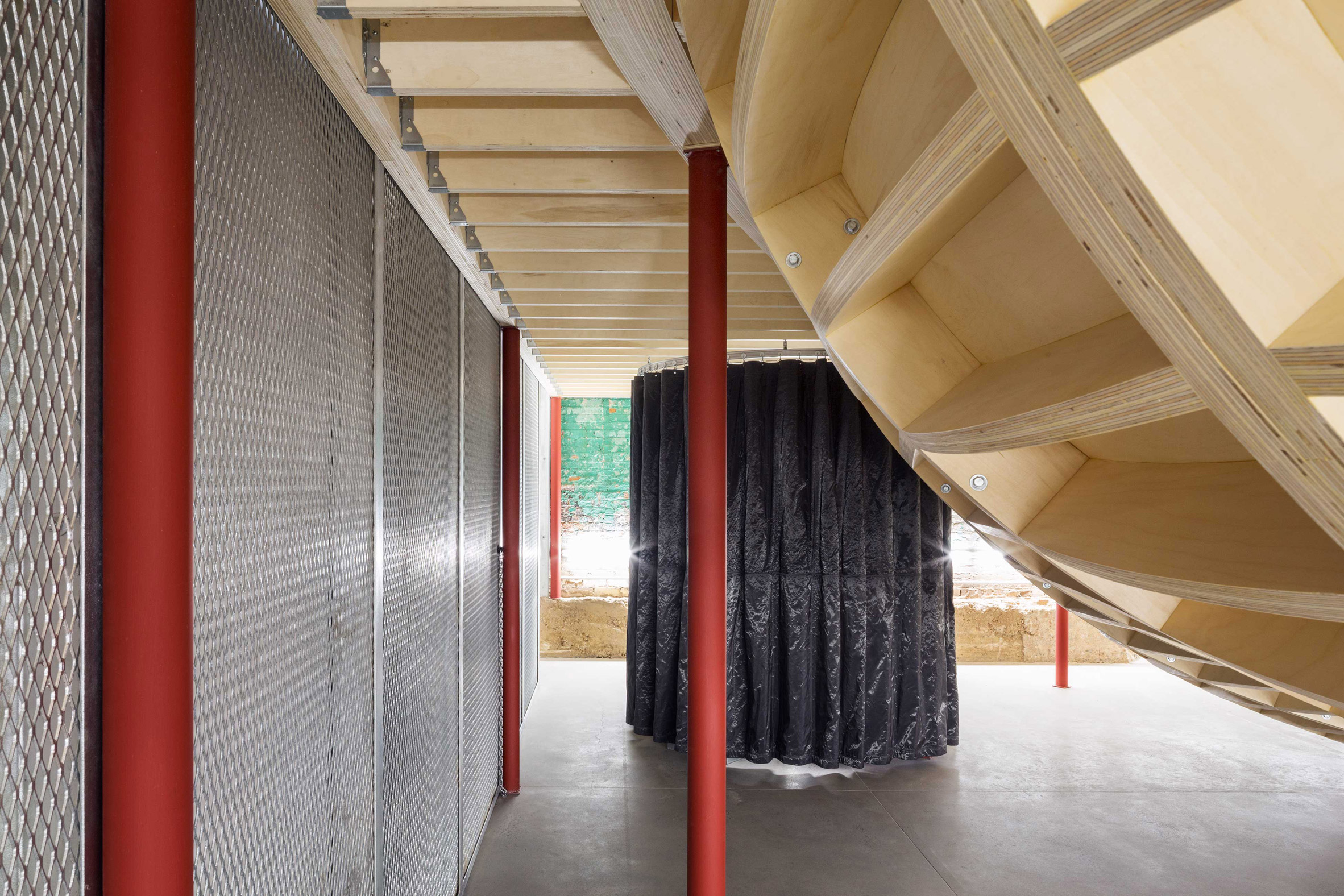 Translucent fabric conceals the stockroom in the far back corner, while metal-reinforced fabric forms the dressing rooms.

Supreme was founded in New York City in 1994 as a skate, fashion and apparel brand, and has since gained a dedicated cult following. Its store on Los Angeles’ Fairfax Avenue has a similar skate bowl to the Brooklyn location, while the Paris outpost is located in an old building with white surfaces and skylights overhauled by Brinkworth. 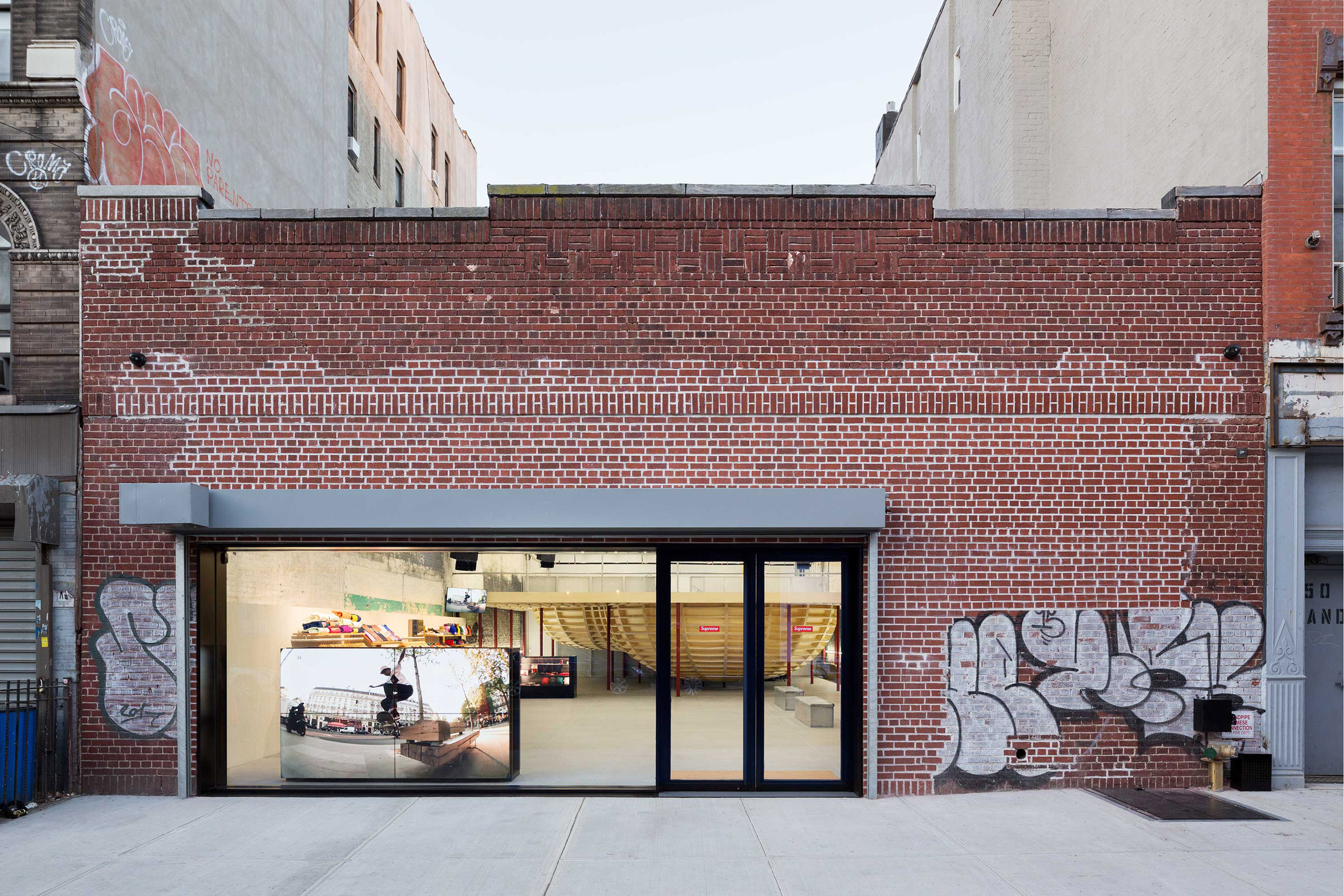 Other projects designed around skateboarding include the Vans headquarters in California by Rapt Studio, a narrow wooden skateboard ramp that floats on Lake Tahoe and designed for pro-skater Bob Burnquistand, and a skatepark made of red concrete in Belgium by B-ILD and Constructo.

Photography is by Dean Kaufman.