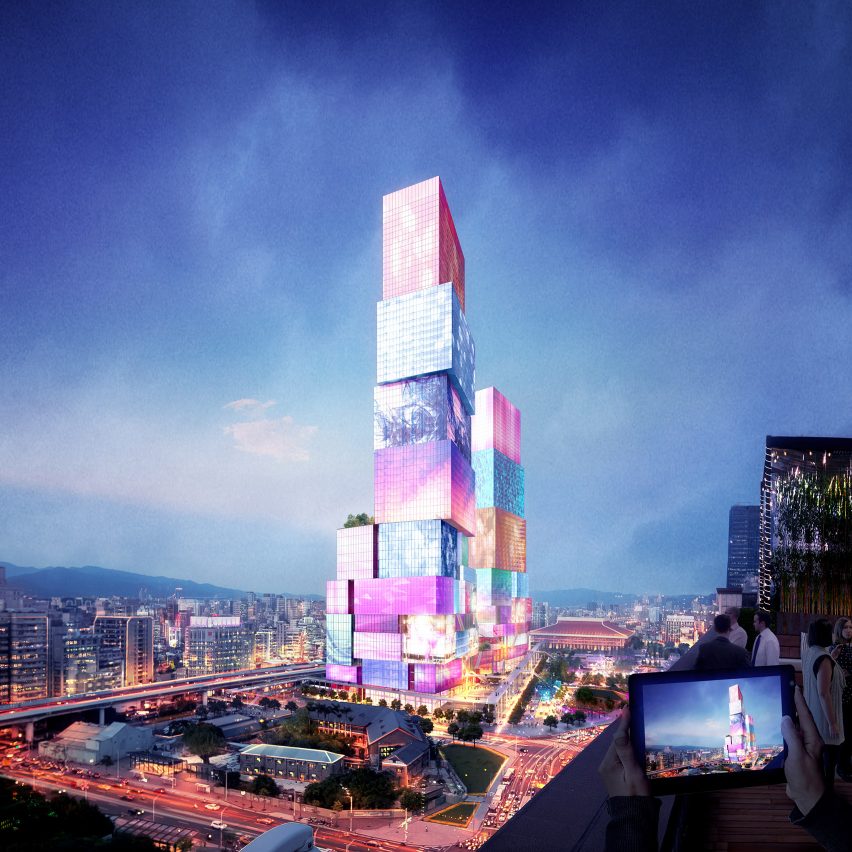 MVRDV has unveiled designs for a pair of towers in Taipei, Taiwan, which will be made from stacks of misaligned blocks wrapped in interactive screens.

Named Taipei Twin Towers, the 337 and 280-metres-tall skyscrapers have been designed by MVRDV in collaboration with CHY Architecture Urban Landscape to revitalise the central station area in the capital’s Zhongzheng district.

The buildings will be constructed as a pile of blocks, each fronted by screens that will display “major cultural spectacles, sporting events, and advertising”, establishing the area as “a Times Square for Taiwan”. 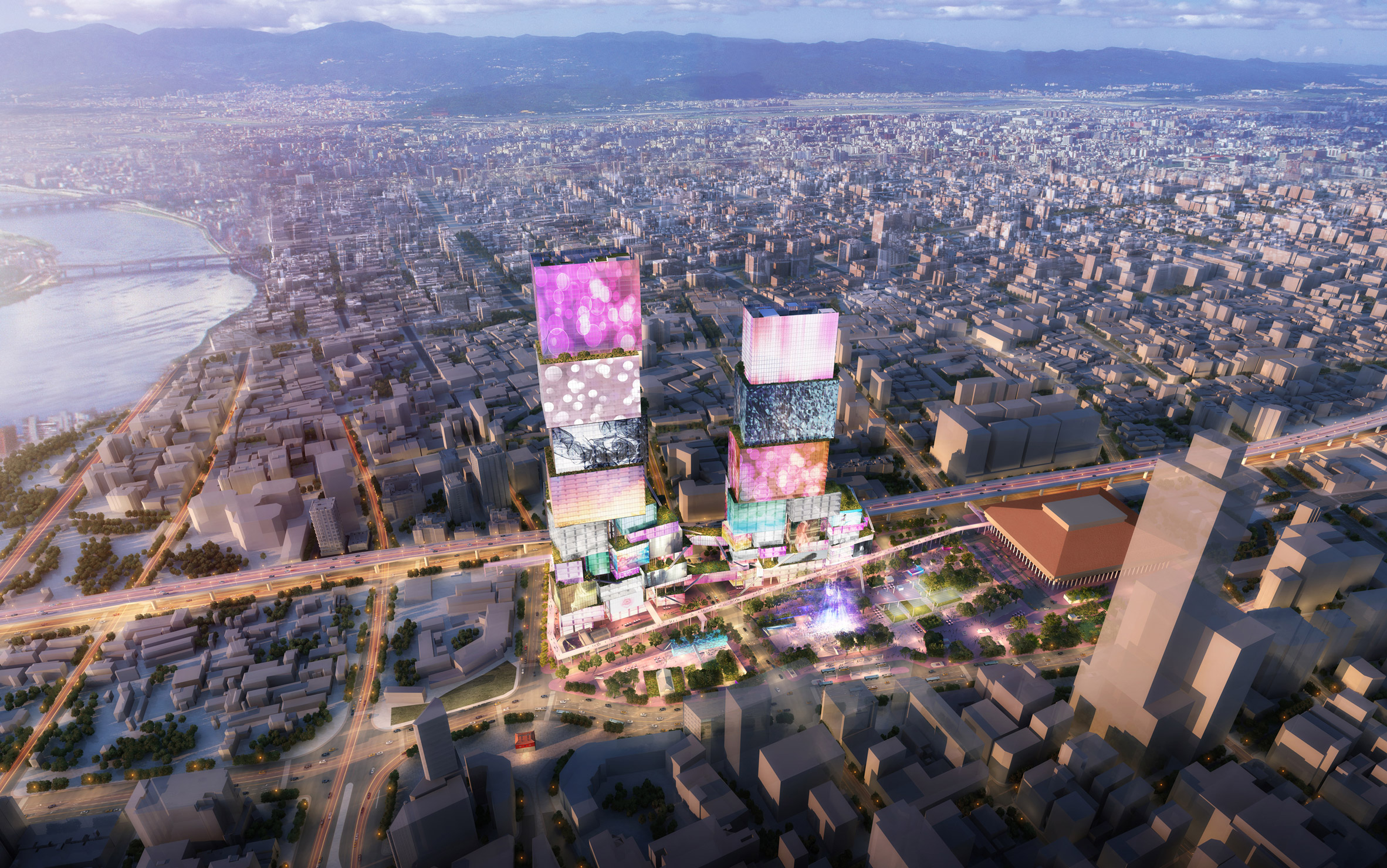 “Arriving at Taipei Central Station is currently an anti-climax. The immediate area does not reveal the metropolitan charms and exciting quality that the Taiwanese metropolis has to offer,” said Winy Maas co-founder of MVRDV.

“The Taipei Twin Towers will turn this area into the downtown that Taipei deserves, with its vibrant mixture of activities matched only by the vibrant collection of facade treatments on the stacked neighbourhood above.” 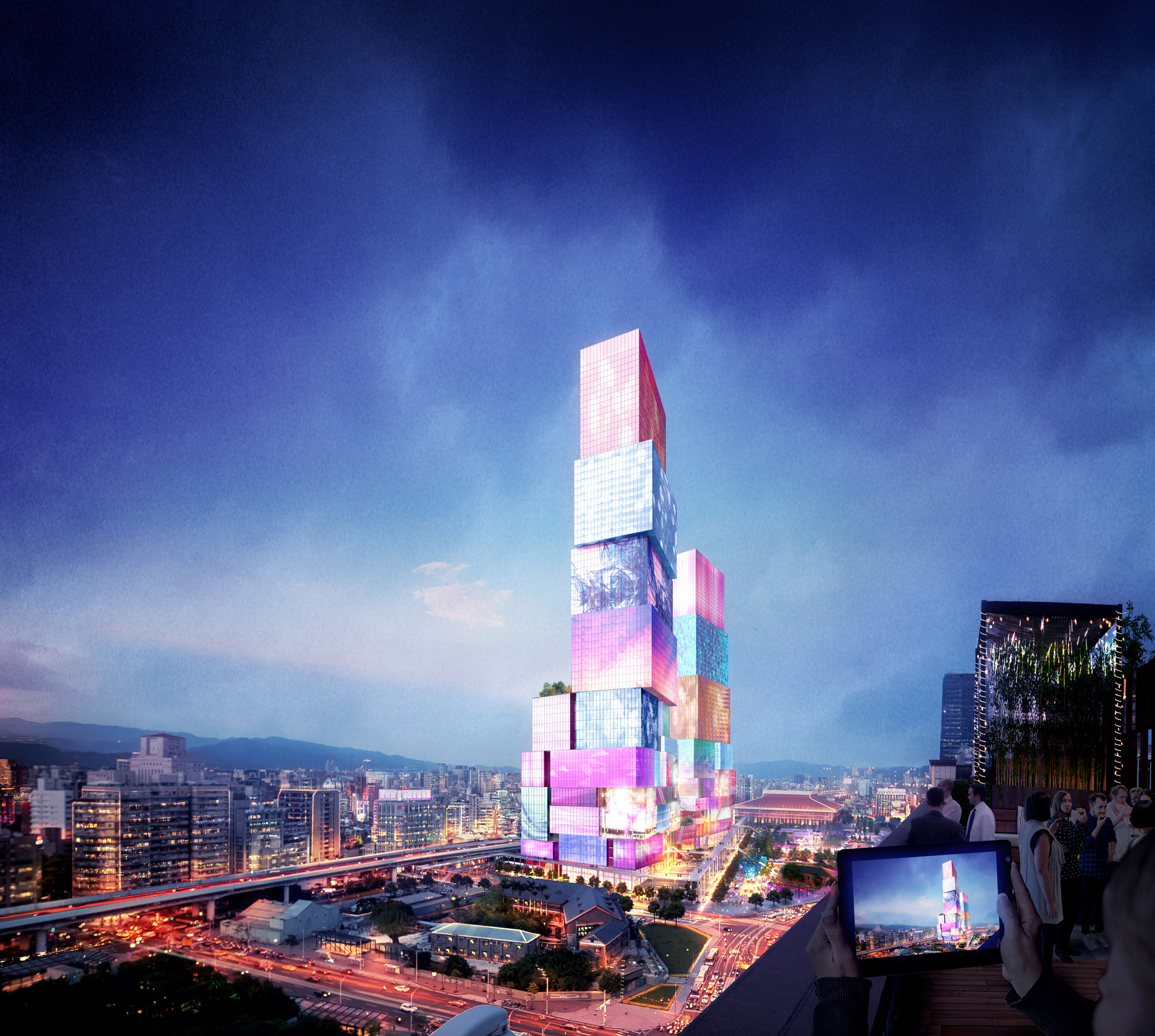 Designed to be built over the existing station, Taipei Twin Towers’ block structure increases in size with each storey, so that the lower levels are a more “human-scale” to complement the surrounding buildings.

These lower level blocks will be organised around public atriums and used for retail. Each block will contain a shop.

Above, the larger blocks will be occupied by offices, cinemas, and two hotels. The east tower is designed for “young travellers”, while the west tower focuses more on “the luxury market”.

Plant-filled terraces will top the tower’s retail storeys, providing meeting and rest places for visitors. They will be accessed by elevated walkways and escalators that connect the lower 20 floors of the building and their surroundings. 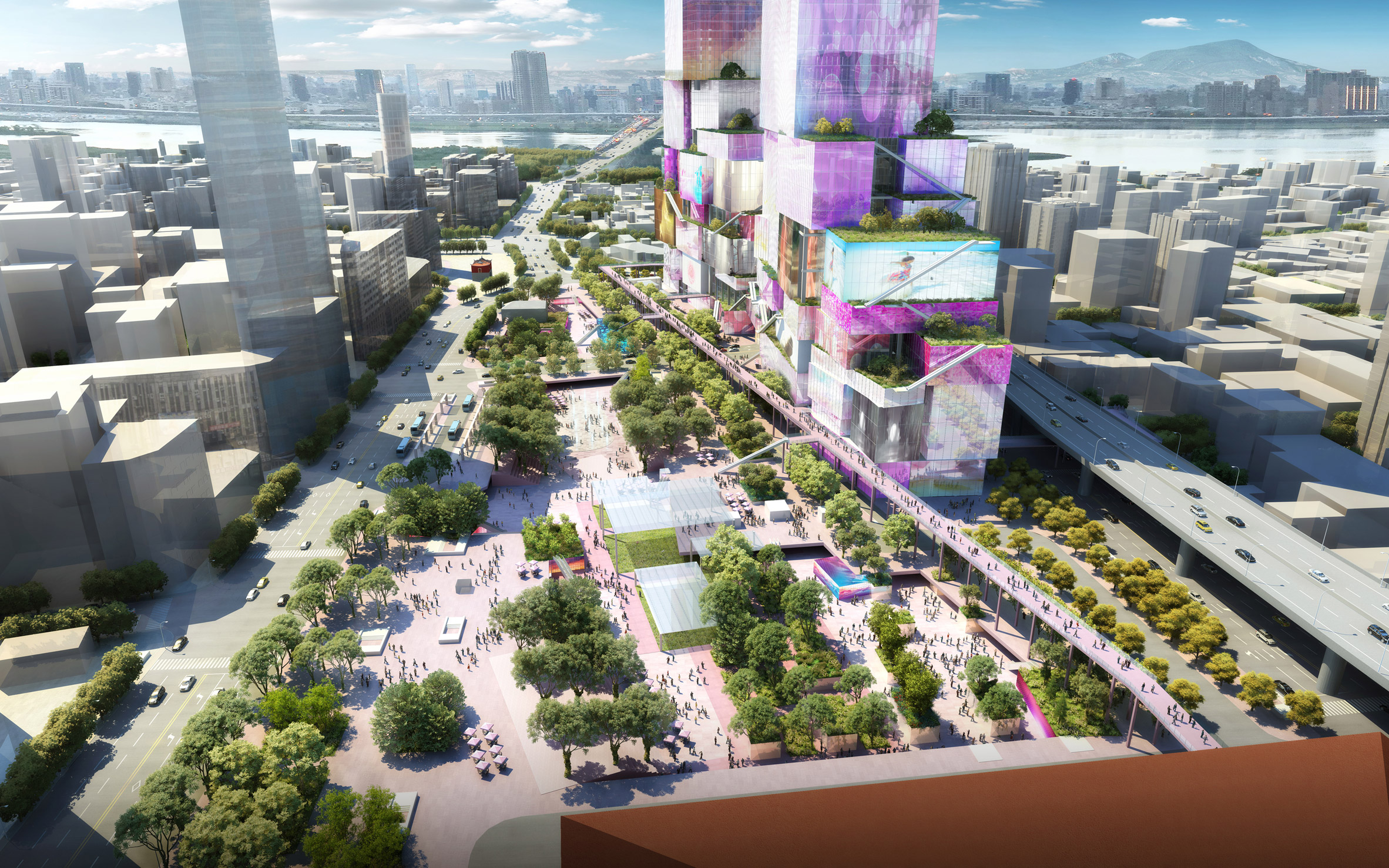 Designed to encourage “exploration”, MVRDV has divided these walkways into named routes, including entertainment, sport and food, which also provide alternative access to the stores.

MVRDV also plans to incorporate an elevated walkway that connects to the existing station, for which there are currently two designs. 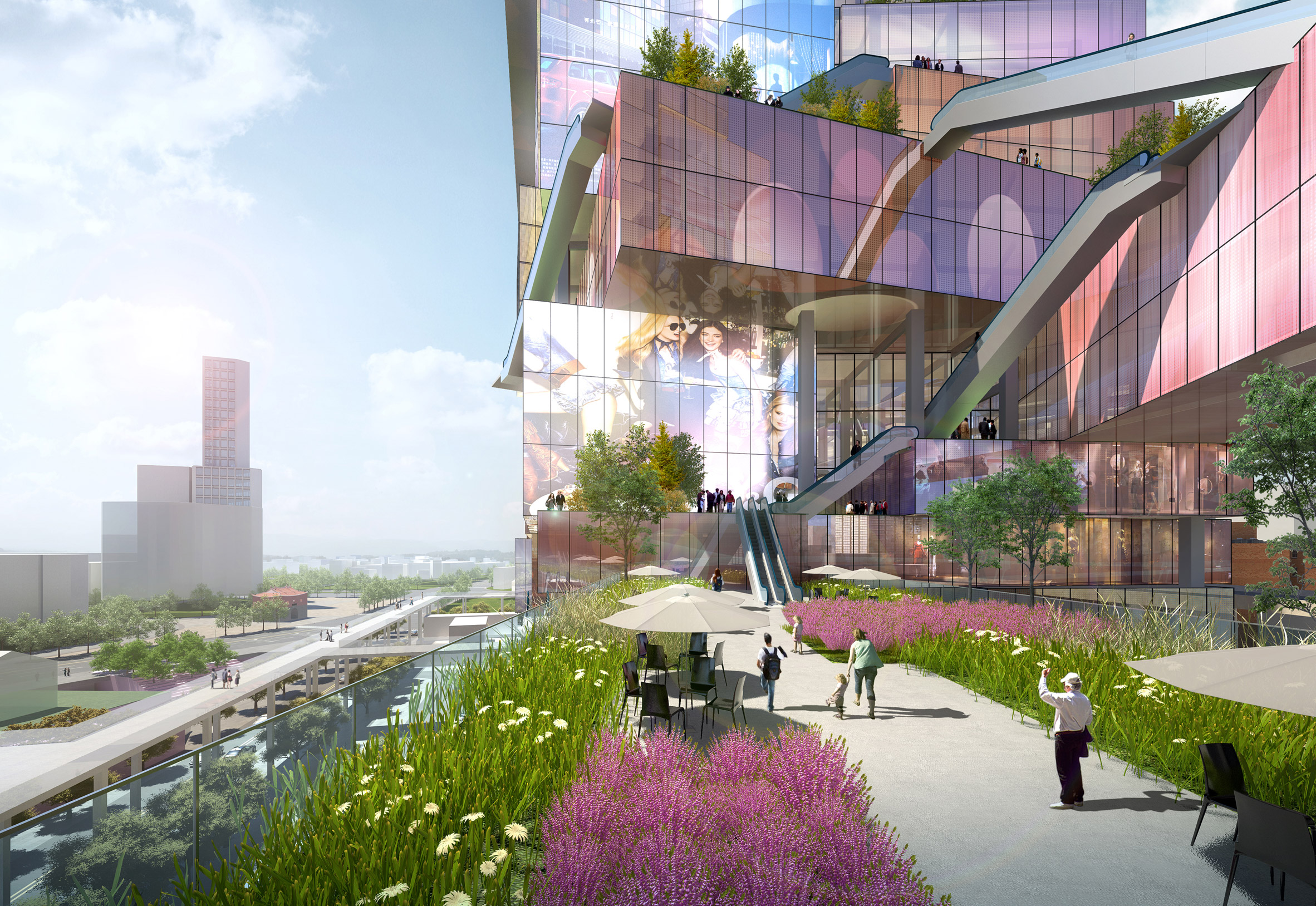 The Taipei Twin Towers will also see the redevelopment of the existing plazas surrounding the station. MVRDV will introduce a series of structures that reference the history of the site, positioned on former locations of the original station and plaza, and neighbouring houses.

These structures will be topped by pergolas, transforming them into shaded platforms for events and other public activities.

“The aim is to provide a vibrant and charismatic destination that re-establishes the central station area of Taipei as the city’s premier location for shopping, working, and tourism,” added the architects.

MVRDV, which has offices in both Rotterdam and Shanghai, designed the Taipei Twin Towers in collaboration with co-architect CHY Architecture Urban Landscape.

The project follows MVRDV’s recent announcement of a “new type of skyscraper”, Vanke 3D City in China, and the recently completed low-cost accommodation in India.

The post Taipei Twin Towers by MVRDV will be “a Times Square for Taiwan” appeared first on Dezeen.