Mole Architects has completed a house in the English seaside town of Poole, comprising a pair of blackened-timber volumes that resemble the upturned hull of a boat. 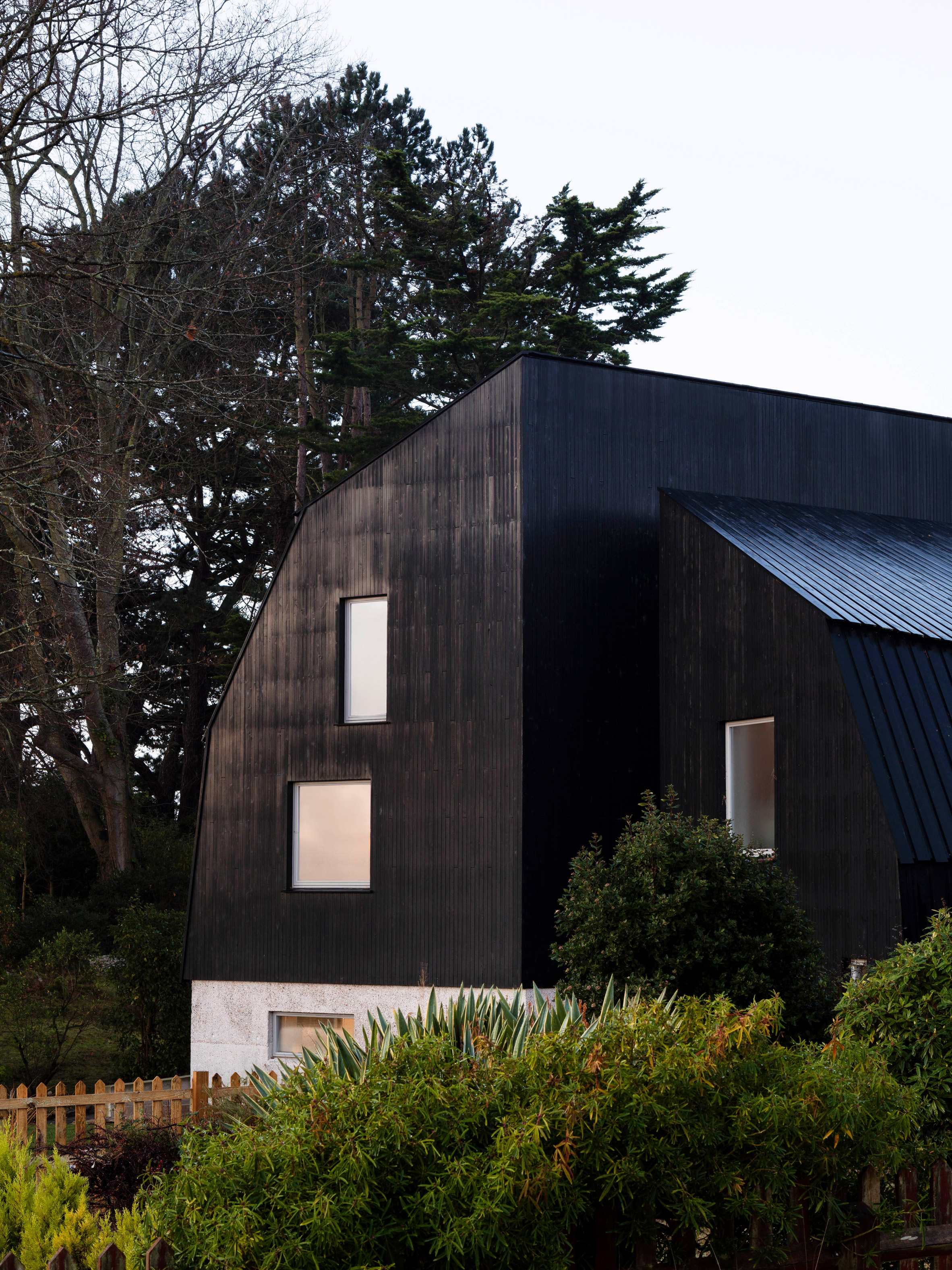 Cambridge-based Mole Architects designed The Houseboat for architect and developer Roger Zogolovitch, who wanted a space his family could use as an alternative quiet retreat to their main house.

The property is located in the garden of the Boat House, a heritage-listed whitewashed 1930s modernist villa created by a local businessman called Mr Cullen and now owned by Zogolovitch. 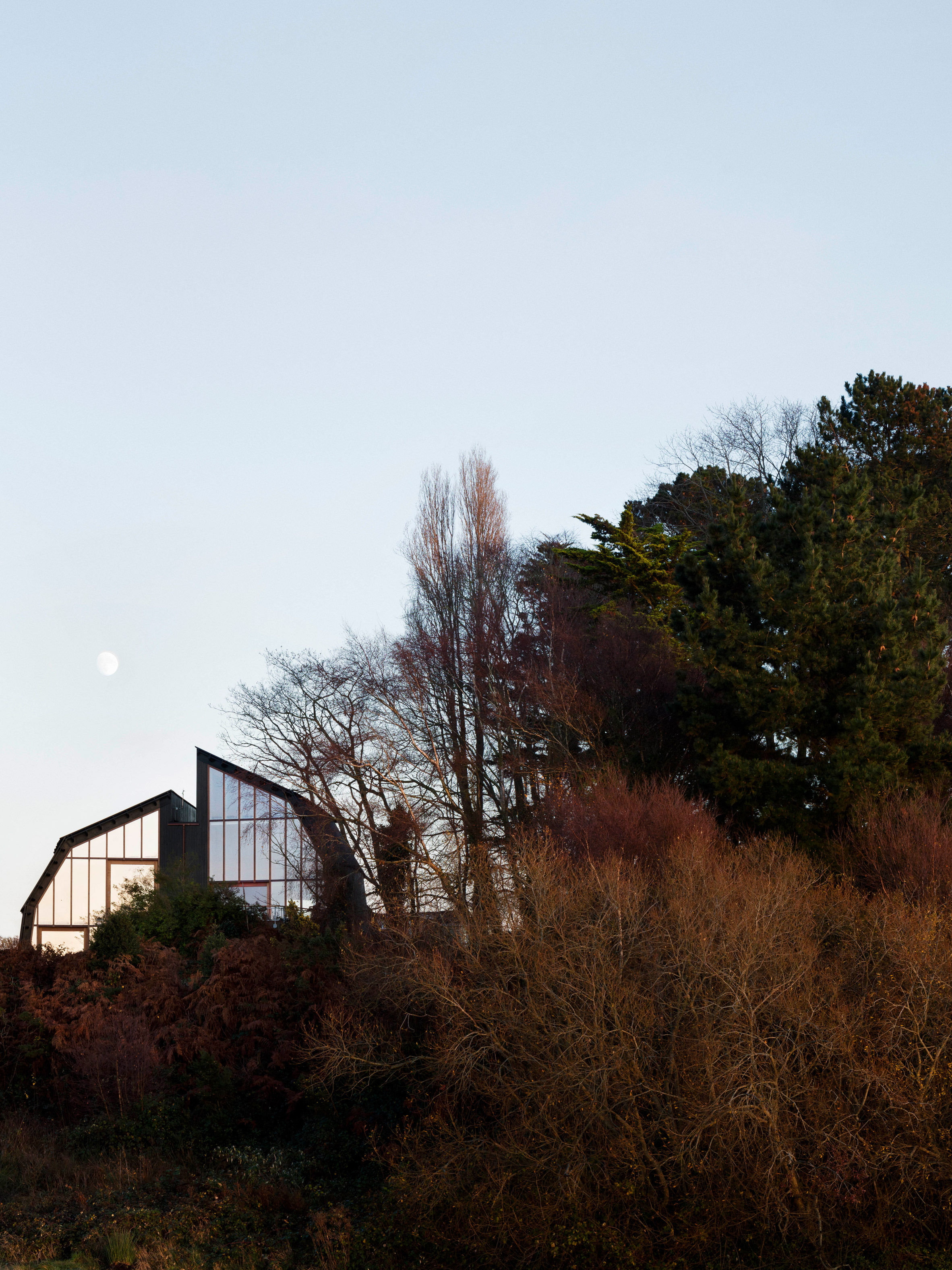 Cullen enjoyed travelling on the SS Mauritania cruise liner so much that he bought its second-class lounge and had it installed at the centre of his home, with cabin-like bedrooms arranged around a circular gallery on the upper level.

Mole Architects founder Meredith Bowles said he was inspired by the arrangement of spaces in the Boat House, which offers sea views through porthole windows on the bedroom level and a link to the outdoors via a terrace below. 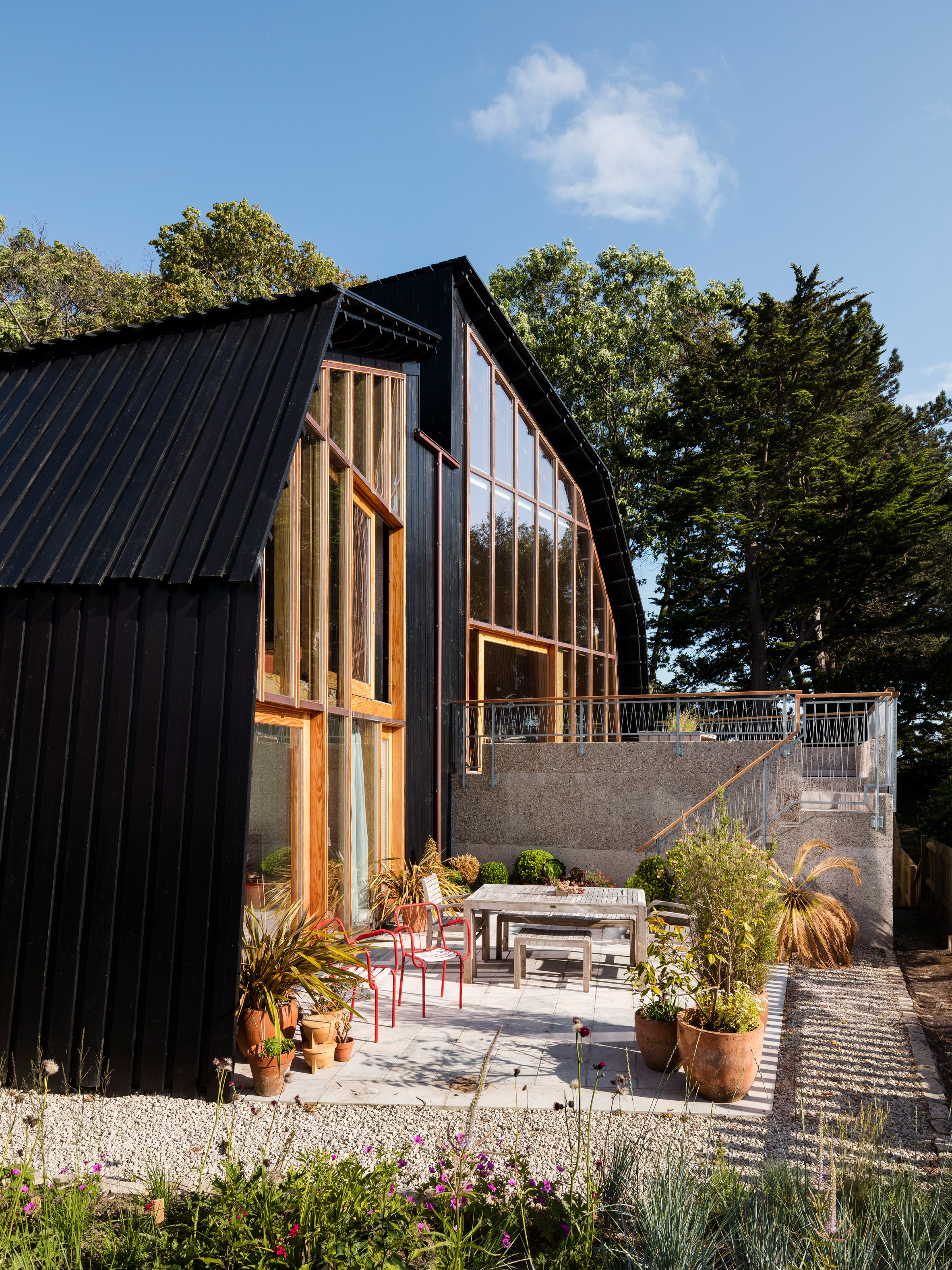 “I felt that a new building on the same site had to be a companion, and should converse with the first house,” said the architect.

“The site for The Houseboat has the same opportunity, but in reverse. If one gets up to the first floor, there are wonderful views over the heathland and to the bay beyond.” 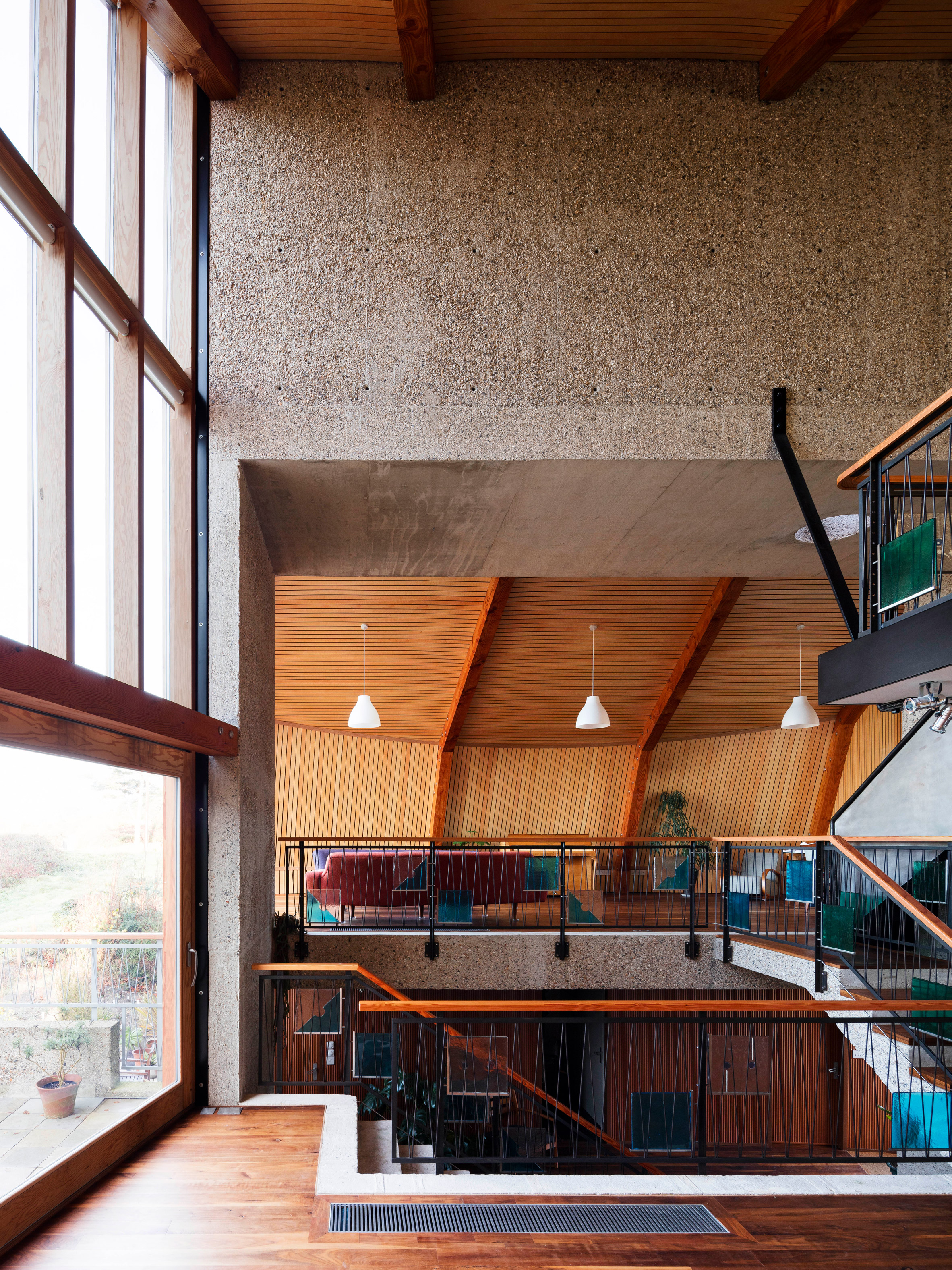 The building is positioned among tall pine trees and features two vertical volumes of slightly differing heights. In plan, the two parts of the house bow outwards to increase the internal volume and offer a counterpoint to the established street pattern of its suburban setting.

“The house is designed as two hulls, upturned for shelter and sat upon a solid base,” Bowles added. “One side sits up higher, following the staggered section, but also negotiating the change of scale from the residential street to the high pine trees to the south.” 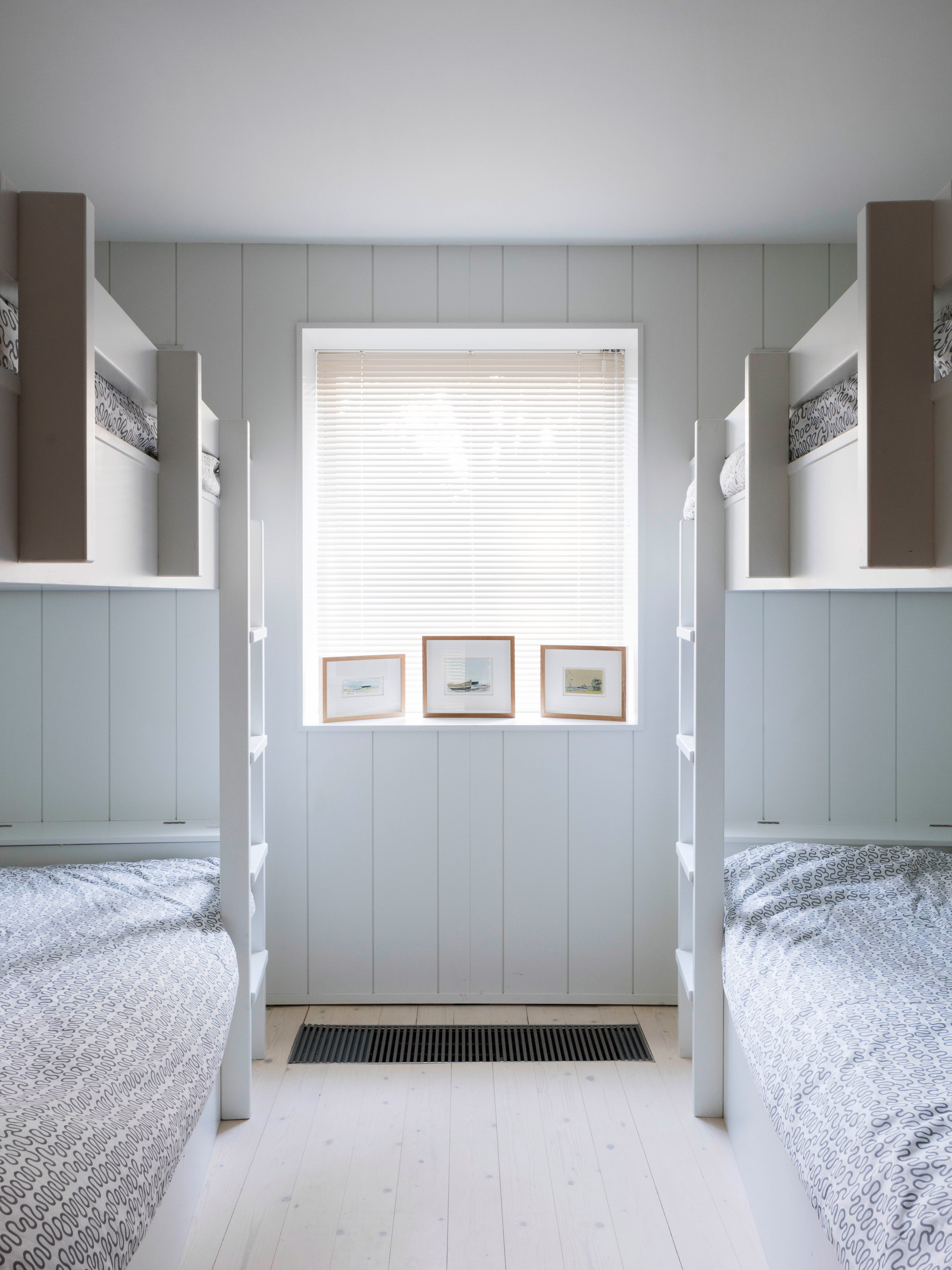 The concrete plinth contains bedrooms packed tightly together as if in the hold of a ship. An entrance at the centre of the building leads into a hallway providing access to the master bedroom, with the other rooms a half-level below.

The entrance corridor looks up through a three-storey void towards the concrete arch that supports the rest of the house. Porthole-like incisions in this concrete structure allow daylight to filter through. 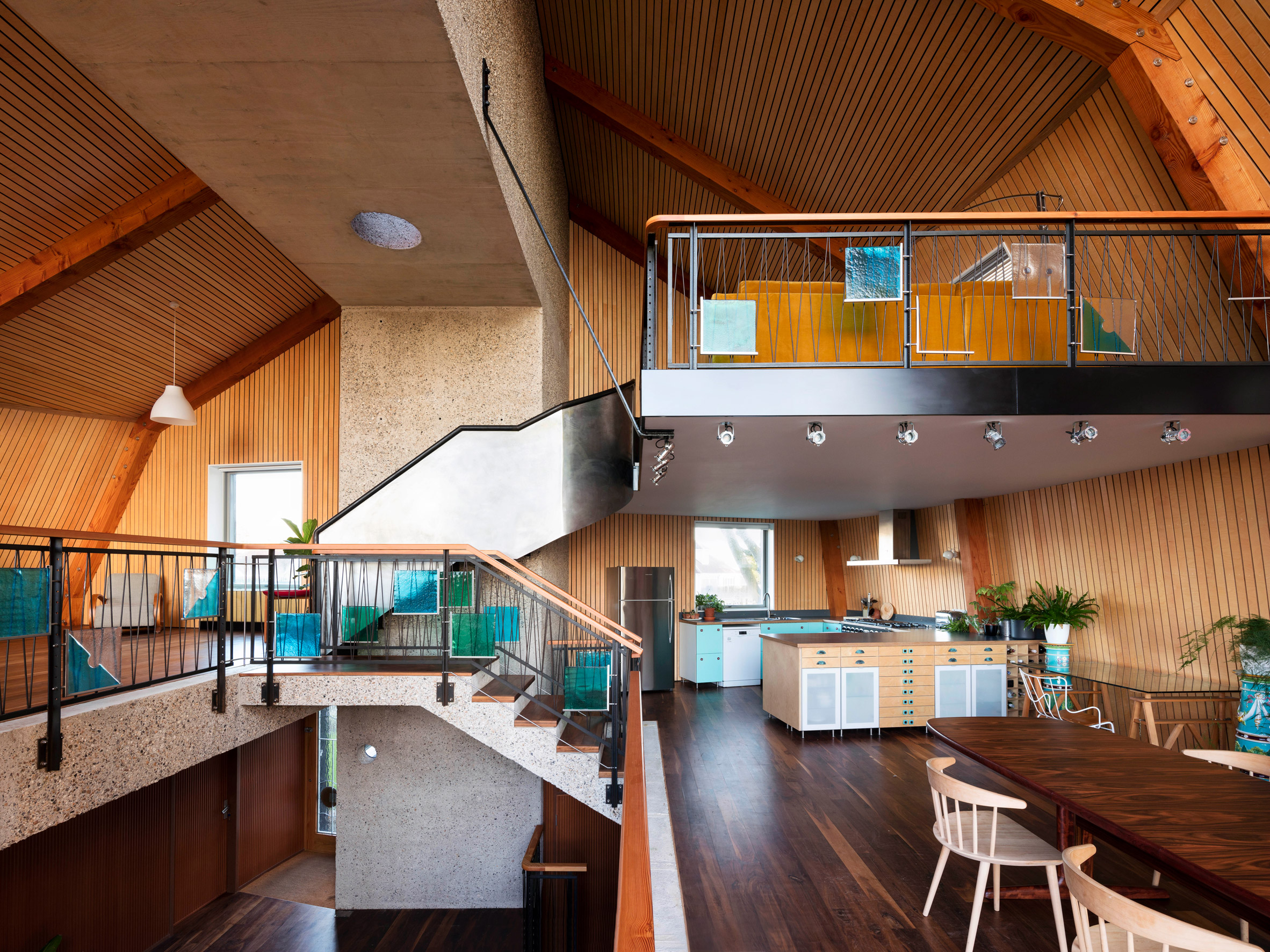 Stairs connect the entrance hall with the main living and dining areas, which are arranged across multiple split levels. These open spaces are suspended within the timber-lined interior and intended to give the feeling of being on a ship’s deck.

Curving timber-lined walls are supported by portal frames in Douglas fir that allow the spaces to bulge out towards the middle before narrowing again as they meet the sheer gables at either end. 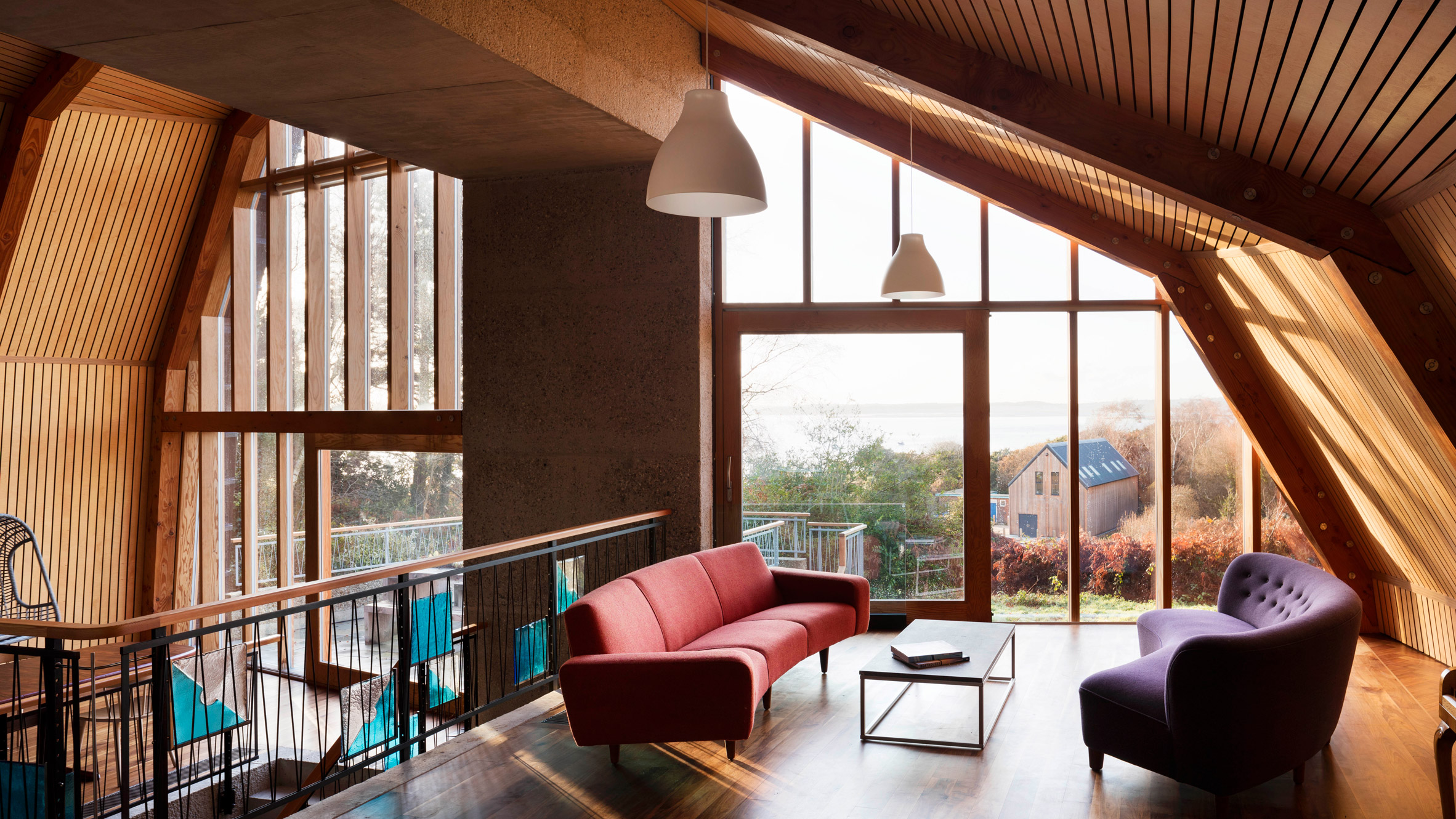 The east elevation displays the blackened timber cladding and is punctuated by a few carefully positioned windows, while the west facade is fully glazed to provide view towards the bay.

The wooden mullions framing the windows incorporate sliding panels that connect a lounge and dining space with the garden and a decked terrace. 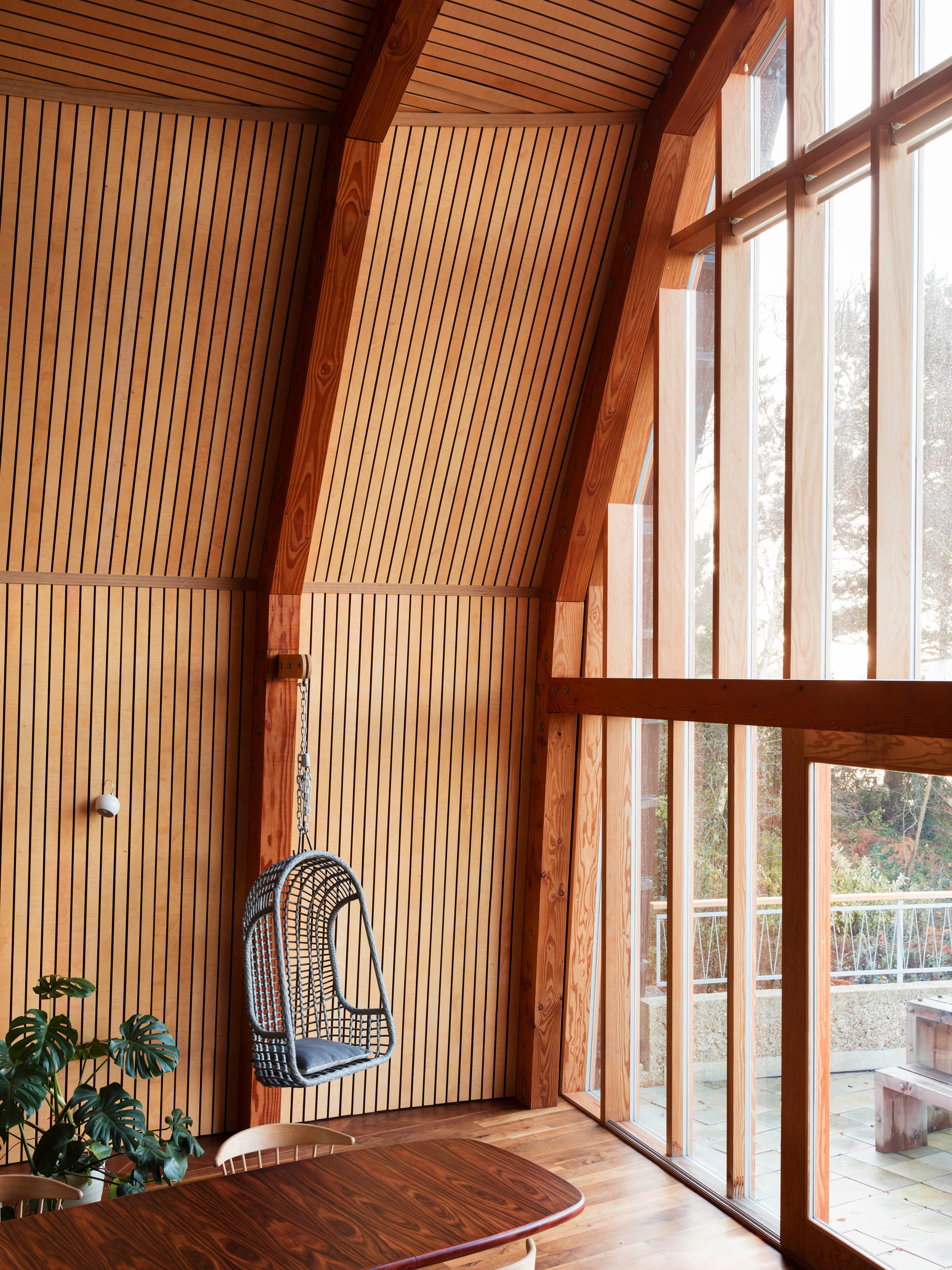 The matchboard cladding covering the internal walls and ceilings offers a warm complement to the exposed concrete structure and enhances the house’s nautical aesthetic.

Mole Architects has previously designed a barrel-vaulted extension to a protected farmhouse in south-east England and a timber-clad house in Suffolk based on traditional vicars’ residences. 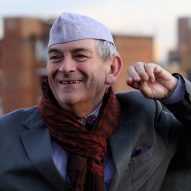 The post The Houseboat by Mole Architects evokes the underside of a ship’s hull appeared first on Dezeen.