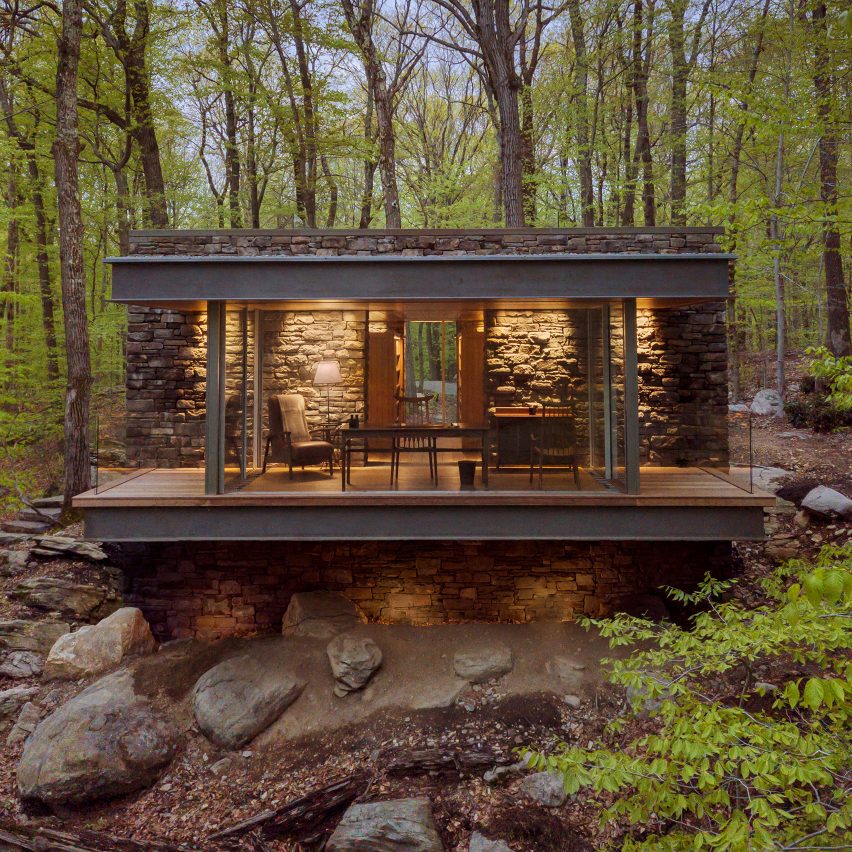 After a turbulent 2020, this year designers should be braver and bolder, says Michelle Ogundehin in her interior design anti-trends report for 2021.

I concluded my 2020 Interiors Report with the words, “I still believe that we can be as brilliantly inventive as we have previously been so terribly destructive. However, 2020 is our make-or-break year to prove it.”

Six months later I wrote about the potential impact of the coronavirus on our homes. In summary, your environment is as fundamental to your health and well-being as nutrition and exercise.

However, Covid is not the only issue impacting society. The pandemic simply crunched years of behavioural change into months. Resistance wears away when something becomes a necessity. And while some of the responses to global lockdowns gave us a glimpse of potential solutions, other factors are having an equally noxious affect on the way we live.

As Christopher Ryan says in his book, Civilised to Death: The Price of Progress, “the zoo we’ve designed for ourselves is a poor reflection of the world in which our species evolved, and is thus a profoundly unhealthy, unhappy place for too many of the human animals it contains.”

This report then is less about trends, than exposed truths

Certainly, if we peel back the cladding on much of the residential housing built over the last few decades, it reveals a horrifying disrespect for the humane as the dignity of the occupants is routinely sacrificed at the altar of profit – tiny windows, minimal footprints, cramped rooms, no easy access to outside space, and not least, cheap and dangerous building materials.

It’s a symptom of where we find ourselves, but also a contributor to the cause as it affects our primal need for a safe place to call home. This report then is less about trends, than exposed truths.

After all, even before Covid, normal wasn’t working. To quote the American socio-biologist Edward O Wilson, “The real problem of humanity is the following: we have palaeolithic emotions; medieval institutions; and godlike technology.” Or as Sophocles would have it, “nothing vast enters the life of mortals without a curse”.

In other words, the flip side of the incredible technology we have at our fingertips is that it’s simultaneously being used as a tool to erode the very fabric of society – community, connection, reality and considered thought (which I explain as the desire to check sources and decide for ourselves before accepting opinion as fact). Plus, apps to run our baths, ever faster broadband, the ability to manipulate genes, Klarna, deep fakes and cheap flights to far-flung lands? Just because we can, doesn’t mean we should.

Blurring the boundaries between home and work is not without repercussion

It had already been estimated that by 2020, 50 per cent of the UK workforce would be working from home. Campaigning for the flexibility it offered had previously been vociferous, especially for women.

Besides, employees were at breaking point. The toxic culture of presenteeism resulted in 44 per cent of all UK work-related absences being due to stress and anxiety. In short, work as we knew it was already broken. It was just the bosses who feared staff would be less productive if given more freedom. The opposite has been proven to be true.

Nevertheless, blurring the boundaries between home and work is not without repercussion. Alongside the impossibility of overlaying parenting with employment in the same space and hours, even without children in tow, the ability to WFH assumes you have adequate room, equipment and support. And if you injure yourself on-the-job at home, are you insured?

We would also do well to remember the salutary tale of “Bob”, the US software developer who in 2013 outsourced his job to a Chinese consulting firm for a fifth of his salary. His work didn’t suffer.

For these reasons alone, the demise of the office is over-stated. Besides, according to an Arup survey published in The Sunday Times, for every 100 office workers, four jobs are sustained in the food/drink sector; six in hospitality and seven in retail. But, if businesses are smart, offices will be smaller and used as three-day week hub points for shared learning, innovation and collaboration. People are innately social animals. We need to come together to get things done. This will engender improved productivity and creativity with a happier workforce.

Fear is not a trustworthy motivator for long-term survival

And yet, living with uncertainty can be a great spur to innovation and discovery. Regardless, in so many aspects of life we have become more fearful. We begin to believe that it’s OK to attempt to live forever, plan an exodus to Mars, medicate our way out of aging, or see the world as something to be perpetually controlled and conquered. This is not progress, it’s to rail against the natural order of life. Fear is not a trustworthy motivator for long-term survival.

For example, a vaccine is a reprieve from fear, but a vaccine is not a cure. It’s a shield. Like a mask. Or hand-sanitising. Absolutely required to protect the most vulnerable, but mass inoculation does little to address the cause.

And when another pandemic occurs, our response cannot be a repeat performance of the ‘muzzle-up-and-shut-down’ while waiting to be saved, as already witnessed. The collateral damage of disrupted lives, broken livelihoods and the inevitable mental health fall-out are too severe. There has to be another way.

We could start by taking some personal responsibility. As Richard Horton, editor-in-chief of The Lancet put it, “Our liberties depend on our wellbeing”. And yet, “we create the risks that threaten us… Our space for manoeuvre is narrowing. Pandemics are the new normal. We had better understand that. And get used to it.”

Thankfully, we already have inside us one of the most potent infection-fighting bits of kit imaginable, our immune systems. We need to bolster these. However contemporary life for many does precisely the opposite. We will spend on average 90 per cent of our time indoors and by 2050 the UN had predicted that 68 per cent of the world population would be living in profoundly urban environments.

UK government schemes like Chancellor Rishi Sunak’s eat-out-to-help-out initiative imply that it’s our moral and civic duty to support the economy. But is it?

Previously eradicated diseases like rickets and gout are returning to developed nations, alongside childhood myopia and obesity, all attributable to increasingly screen-based, sedentary lifestyles with a profound lack of outside time. As a result, instead of getting stronger as a species, we appear to be getting weaker. This is a pathology of society, not just our bodies.

As the Journal of Affective Disorders stated in 2012 (from Christopher Ryan’s Civilised to Death): “The economic and marketing forces of modern society have engineered an environment… that maximise[s] consumption at the long-term cost of well-being.

In effect, humans have dragged a body with a long hominid history into an overfed, malnourished, sedentary, sunlight-deficient, sleep-deprived, competitive, inequitable and socially-isolating environment with dire consequences.”

Surely then the vital question must be: if city centres were previously considered the engines of the economy, but urban hubs don’t work for us and we need more room for homeworking as well as outside space, what must change – us, or the way we view “the economy”?

UK government schemes like Chancellor Rishi Sunak’s eat-out-to-help-out initiative imply that it’s our moral and civic duty to support the economy. But is it? If a recession is on the horizon, shouldn’t I be saving or downsizing? But if I don’t spend, do I in effect prompt the downturn? Catch 22.

And what of that other political punchbag, education. “The Future of Jobs Report” prepared by the World Economic Forum in 2016 stated that 65 per ceny of the children entering primary school then would end up in jobs that don’t currently exist. Despite this, existing measurements of learning — annual exams, one-size-fits-all curriculae – do little to assess and develop character traits like curiosity, resilience and independence of thought. Essential for our children both today and if they are to be employable in the future.

So where do we go from here? We’ve shattered the economy and ideas of sovereignty. Contemporary society has repeatedly been shown to be fractured along racial, faith and class lines. Most political systems have always been broken (in my opinion, governments are but a country’s HR department: there for the business, never the people). National security was no match for an invisible foe. And healthcare can only ever be based on assumed knowledge.

Basically, everything that we believed comprised ‘civilised society’ has been shown to be more fragile than we thought. It presents a dilemma. It seems we need to go back in order to go forwards, but nostalgia is a mistake, and the future is unknown.

Our global interconnectedness appears to be both our passage to, yet also from, destruction. The return of the analogue is manna for our sanity but automation and robotization are essential for convenience. We cannot deny the might of the ‘attention economy’ — I am still ‘seen’ even in lockdown; therefore, I exist — but it urgently needs to be recalibrated.

Writing as an optimistic realist, I maintain that the power to proactively prompt big change for our best interests has never been so vested with the Everyman. And in that lies our opportunity.

My hope is that over the next few years such conscious consumerism will drive market value rather than the customary manufacturer-prompted lure of the new. Because, while we will almost certainly keep spending, swiping, click and collecting, what I see changing is the awareness that every time we do so, we advocate for the provider to stay in business.

We can individually vote with our wallets for greener energy suppliers and sustainable manufacturers, boycott apps that unnecessarily distract or hook users, or globally demonstrate for cleaner air and ethical governance. Anything rejected by such a collective mainstream will be undermined. In this way even the most established edifices become vulnerable unless they move with the times.

Discomfort begets the new comfort. This is the year for the interiors equivalent of speaking your own truth

The uncomfortable truth is that 2020 might just have been exactly what we needed. A year so damned unsettling that a majority finally woke up and saw that we must understand, even if not accept, polarising points of view. That real evolution is all about balance: new and old; real and virtual; left and right; East and West. Combative duelling is rarely the path to sensible compromise.

And regarding Interior trends for 2021? Discomfort begets the new comfort. This is the year for the interiors equivalent of speaking your own truth. To be braver, bolder and create your own interiors narrative.

To understand that the best homes are about the feeling they give you not the stuff they contain, the “right” colours or “hot” looks. A tidy home doesn’t necessarily make a happy home. And being surrounded by memories is not the same as living in the past — our roots keep us anchored in the present.

Quite simply, we are all products of our environment. If we intentionally create more supportive spaces in which to live, i.e. spaces which reflect our authentic likes and lives rather than anything dictated externally, we will be more able to weather the myriad messy curveballs of life itself. This alone is the true purpose of home. And the impact of fully recognising this could be game-changing, if not potentially life-saving.

Michelle Ogundehin is the author of Happy Inside: How to Harness the Power of Home for Health and Happiness and the head judge on TV series Interior Design Masters.
Main image is of the Dezeen Awards-shortlisted Writer’s Studio by Eric J Smith.

The post "The uncomfortable truth is that 2020 might just have been exactly what we needed" appeared first on Dezeen.