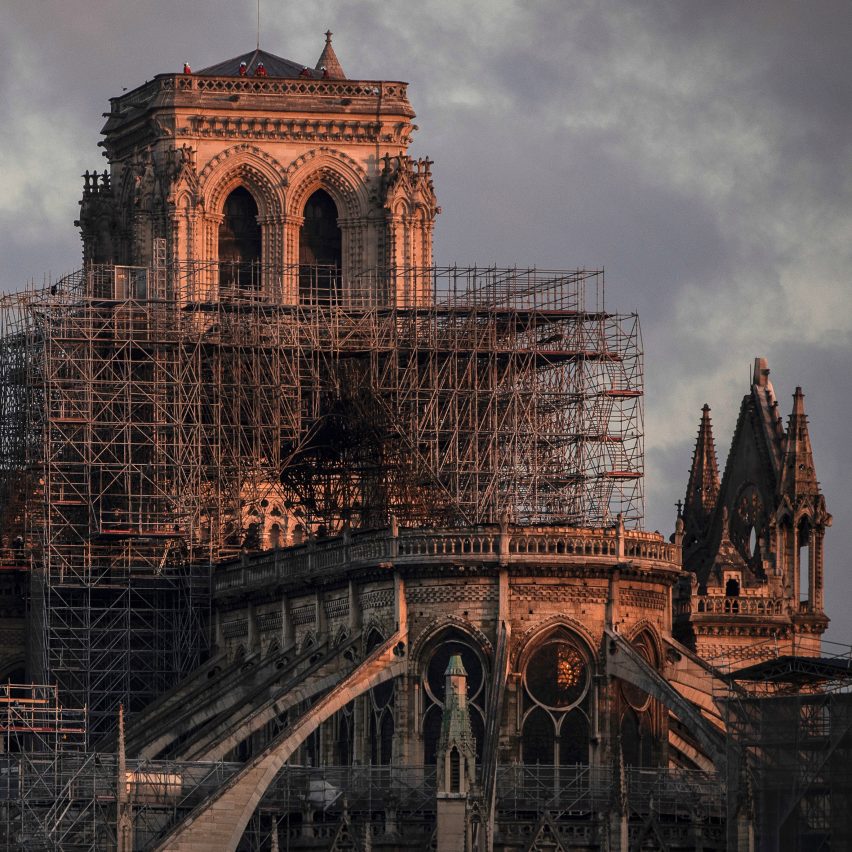 This week on Dezeen, a major fire at Notre-Dame Cathedral in Paris dominated headlines, with millions of euros pledged in support and an architectural competition set to launch for a new spire.

On the evening of 15 April, Paris’ iconic Gothic cathedral was ravaged by a fire that caused its 90-metre-high spire and parts of the roof to completely collapse.

Millions of euros have already been pledged by companies such as Apple and LVMH in support of its restoration. French president Emmanuel Macron has promised this will happen in time for the Paris 2024 Olympics, despite experts setting the time frame closer to the 10-year-mark.

In light of the news, the French prime minister announced plans for an architectural competition to design a replacement for the cathedral’s fallen spire.

He said they will be putting out an international call for a new design that is “adapted to the techniques and the challenges of our era”.

In other architecture news, a property developer in China was ordered to pay 200,000 yuan (£22,900) over an article claiming the Feng Shui of the Wangjing Soho in Beijing by Zaha Hadid Architects was poor.

Meanwhile in the US, BIG completed an extension to the business school at the University of Massachusetts with gradually sloping walls that resemble falling dominos.

Over in the design world, recycling expert Arthur Huang claimed that bioplastics could potentially be worse for the environment than conventional plastics.

According to Huang, switching to plastic made from plants instead of fossil fuels would require vast amounts of farmland, which could cause environmental problems and deprive humans of food.

Also on the topic of sustainability, we rounded up 10 of the best projects and shows that tackled environmental issues at Milan design week 2019, which came to a close on Sunday.

Among the list is Paola Antonelli’s Broken Nature exhibition and Carlo Ratti’s architectural installation made from mushroom mycelium, which both aid in demonstrating how sustainable design finally went mainstream at this year’s festival.

In China, the Auto Shanghai motor show kicked off this week with Audi’s release of its electric and fully autonomous AI:ME concept vehicle, which is designed to be a “third living space” with real plants incorporated into the interior.

Dezeen’s editor-in-chief Marcus Fairs predicted that China will soon leapfrog the west when it comes to architecture and design, as it fast becomes the world’s “creative superpower”.

No longer an emerging nation that needs to learn from the west or copy its way to commercial success, China is in many ways already ahead of the rest of the world, said Fairs.

Popular projects on Dezeen this week include the Topological Folding House by Takashi Yamaguchi & Associates, Commoncraft’s whimsical Gertie cafe in Williamsburg and Husos Arquitectos’ apartment in Madrid with a vertical garden and sleeping pod.

The post This week, fire at Notre-Dame caused a state of emergency appeared first on Dezeen.