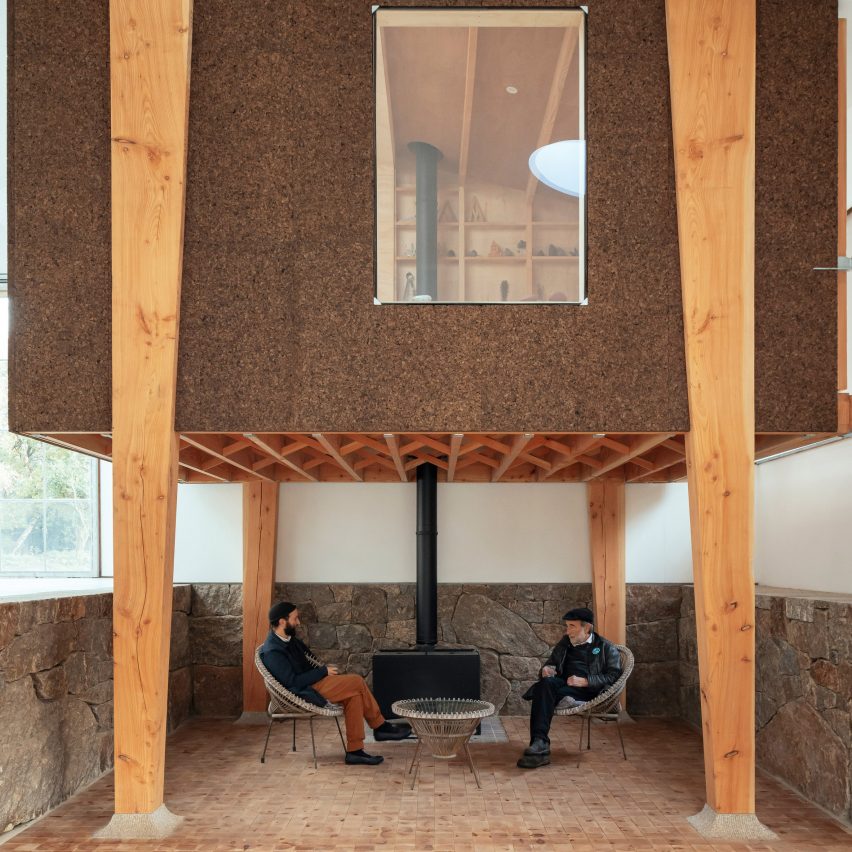 Architect Thomas Randall-Page has renovated and updated an agricultural barn in Devon, England, to create a studio and archive space for his father, the sculptor Peter Randall-Page.

Peter Randall-Page purchased the barn in 2011 and commissioned his son Thomas’s studio to oversee its conversion into a storage space and archive for his work, which includes stone sculptures, drawings and prints inspired by the geometric forms found in nature.

The building, named Art Barn, is located in the countryside on the edge of the Dartmoor National Park. The project brief called for the barn’s appearance to remain largely unchanged and for its new functions to be accommodated within the existing envelope.

“From the outside, I wanted the finished building to appear as a hermetically sealed box,” said Peter Randall-Page, “retaining the character of its agricultural origins and blending in with the contemporary vernacular.”

To meet the requirements for ample natural light and views from within the building, a series of shutters and doors are incorporated into the timber facades.

Sliding doors on either side of the barn can be pulled aside to open the space up to the outdoors. Large glazed doors positioned inside the shutters shield the interior from the elements.

A folding balcony on one side of the building can be operated by hand, thanks to a system of counterweights that enable it to disappear into the cladding when not in use.

Inside Art Barn, the floor plan is divided into three distinct zones to meet the varied environmental requirements of the archive, storage and studio spaces.

The highly insulated and airtight archive to the north is concealed behind a solid wall and accessed through doors at either end. A sensor-controlled dehumidification system is used to protect the precious artworks and documents.

The rest of the interior is left largely open, providing a simple, unheated storage and display area for Peter’s sculptures. A freestanding structure called the “winter studio” provides a cosy space for working throughout the year.

The studio is elevated on timber supports connected to sculpted stone feet. The space underneath provides a lounge area with a wood-burning stove as its facial point.

Another stove inside the studio heats this space, which is wrapped in cork panels to insulate it. Carefully positioned openings fill the interior with an even natural light.

A retaining wall was constructed to mitigate the site’s slope and create two terraces. The wall, crafted from local stone by masons that Peter usually works with, extends into the building and wraps around the space beneath the studio, emphasising the different levels.

“The three split levels provide novel perspectives of the work,” explained Thomas Randall-Page, “altering perceptions of scale and revealing the subtlety with which they touch the ground.”

The building was designed with its whole-life carbon efficiency in mind, using local materials where possible and reusing much of the existing barn’s softwood frame, roof and cladding.

Other materials used in the project are chosen to complement the original agricultural construction, including hot-dipped galvanised steel used for the stairs, bannisters, window frames and doors.

The project developed and evolved gradually over a period of nine years. Most of the contractors were Peter’s own studio team, which informed the choice of materials and the way the building was constructed.

Thomas Randall-Page founded his architectural studio in Hackney in north London in 2014, following spells working for Heatherwick Studio and 6A Architects.

Randall-Page’s previous projects include the design of a manually operated rolling bridge for a dock in east London, and an inflatable arts pavilion that popped up on a London canal.

Peter Randall-Page is known for his large-scale sculptures informed by a study of natural phenomena. He was elected to London’s Royal Academy in 2015 and worked on the design team for the Education Resource Centre at the Eden Project in Cornwall, England, which contains one of his granite sculptures called “Seed”.

Photography and video are by Jim Stephenson.