The timber structure of this house in Kyoto by Japanese studio Alphaville pokes through into the interior spaces, which were designed to optimise the dimensions of a narrow site. 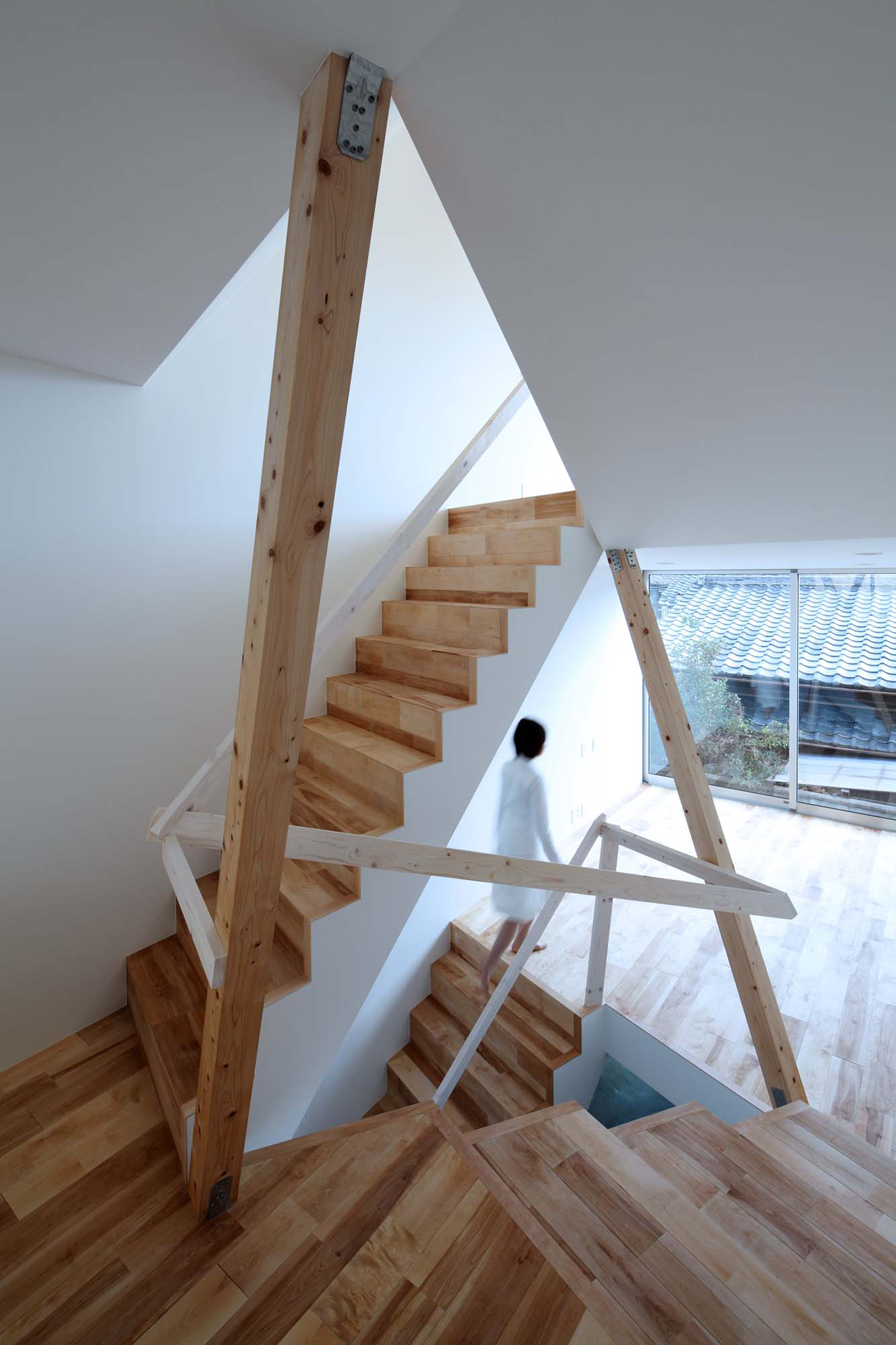 The property is located in a residential area close to the city’s Imperial Palace, where housing lots are typically narrow and elongated so that private yards can be incorporated at the rear.

Alphaville was tasked with creating a home on a plot measuring just 53 square metres, onto which it was able to squeeze a total floor area of 85 square metres. 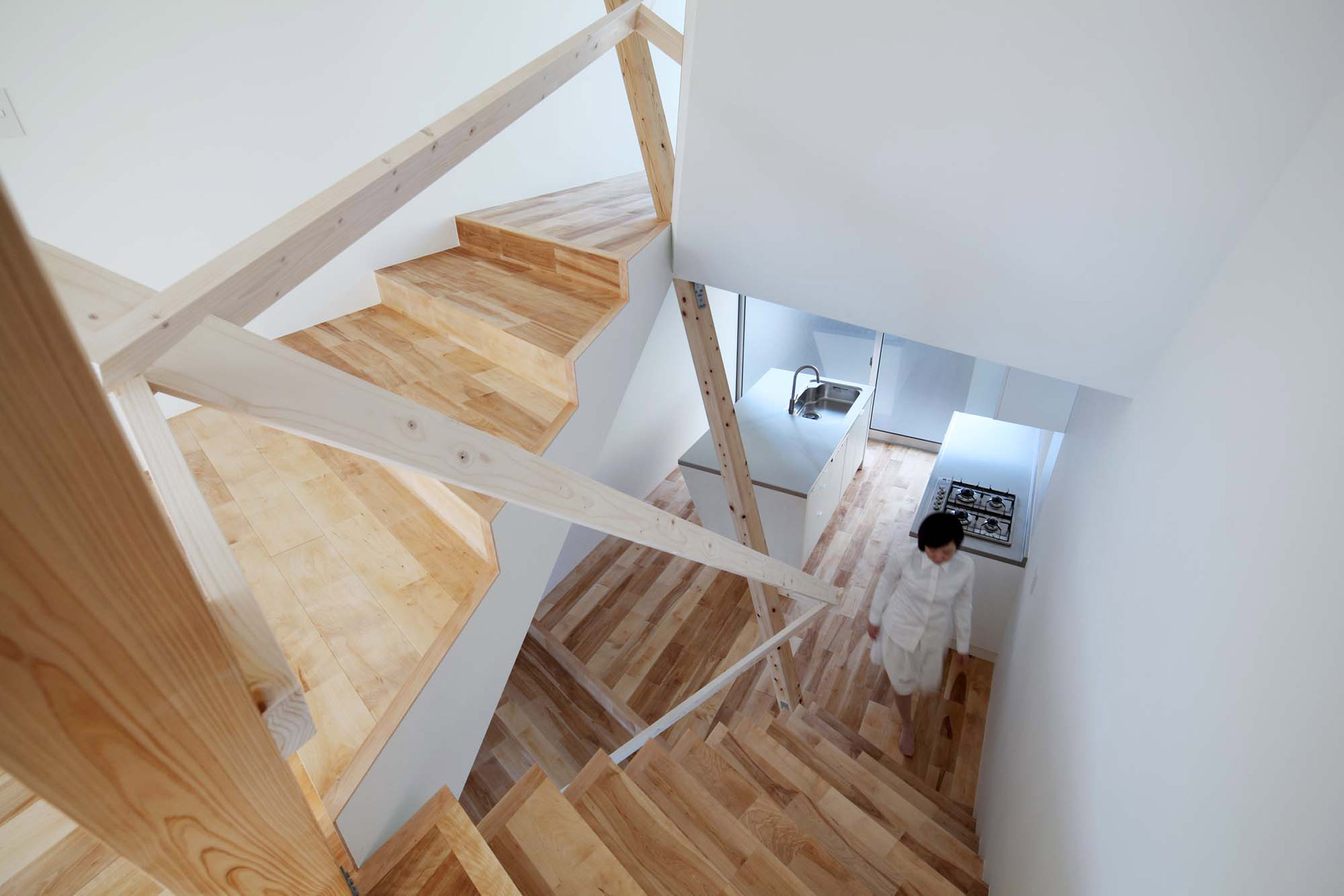 To achieve the optimal internal space while allowing the frontage to be opened up, the architects employed a wooden structure based around a pair of diagonal braces that traverse the building’s entire height.

The diagonal structural elements incorporated within the partition walls serve as both tension members and columns that support beams at the ends of the floors slabs. 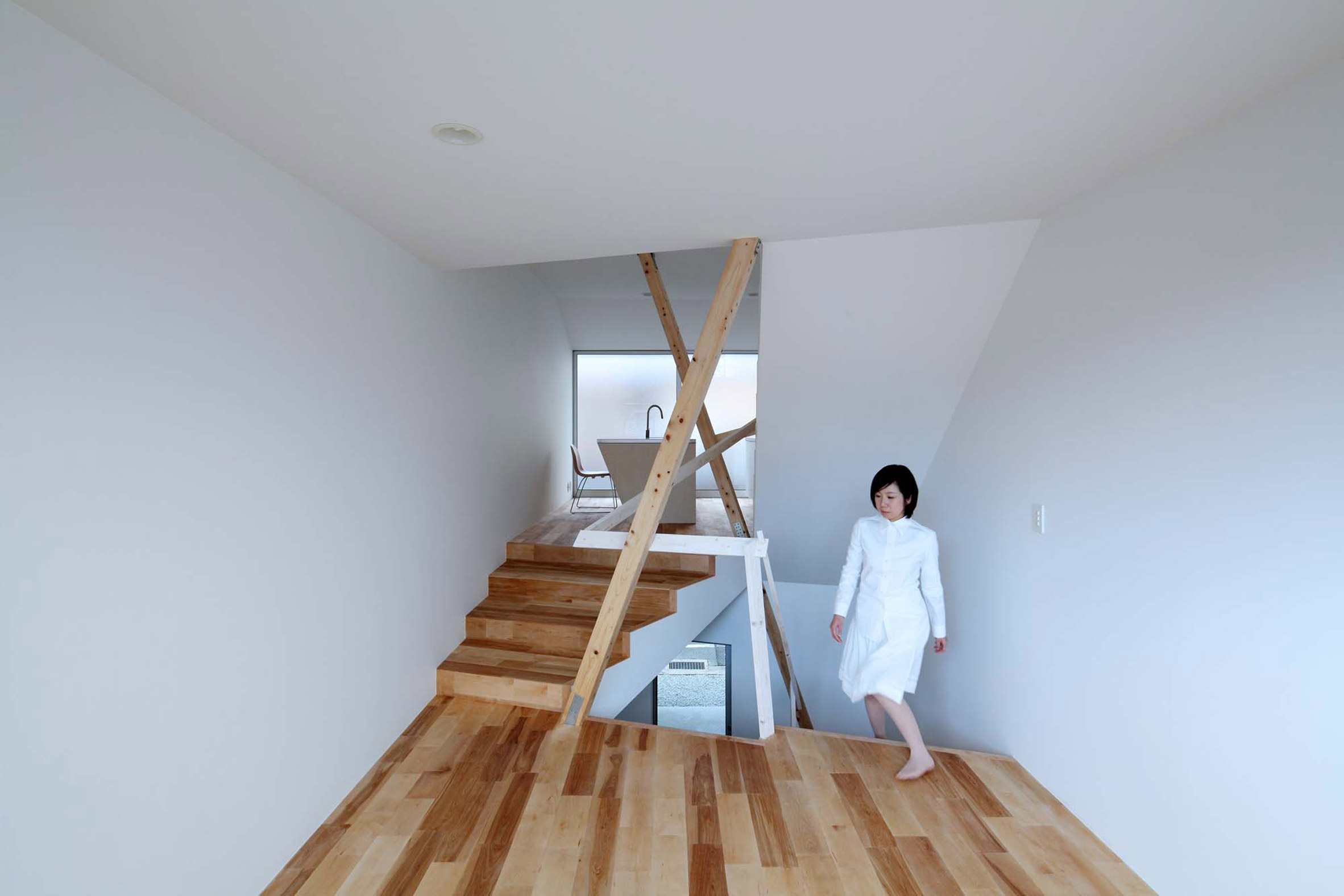 Oriented in opposing directions on either side of the narrow framework, the braces trace a visible line along the inner walls and emerge in some of the rooms and circulation spaces.

The architects chose the typical prefabricated timber-framing construction method for reasons of budget and convenience, and to utilise the skills of local craftsmen.

“These braces are meaningful because they are one medium of inviting carpenters to the small-scale housing projects – a trial that is unusual in other similar residential projects,” said Alphaville. 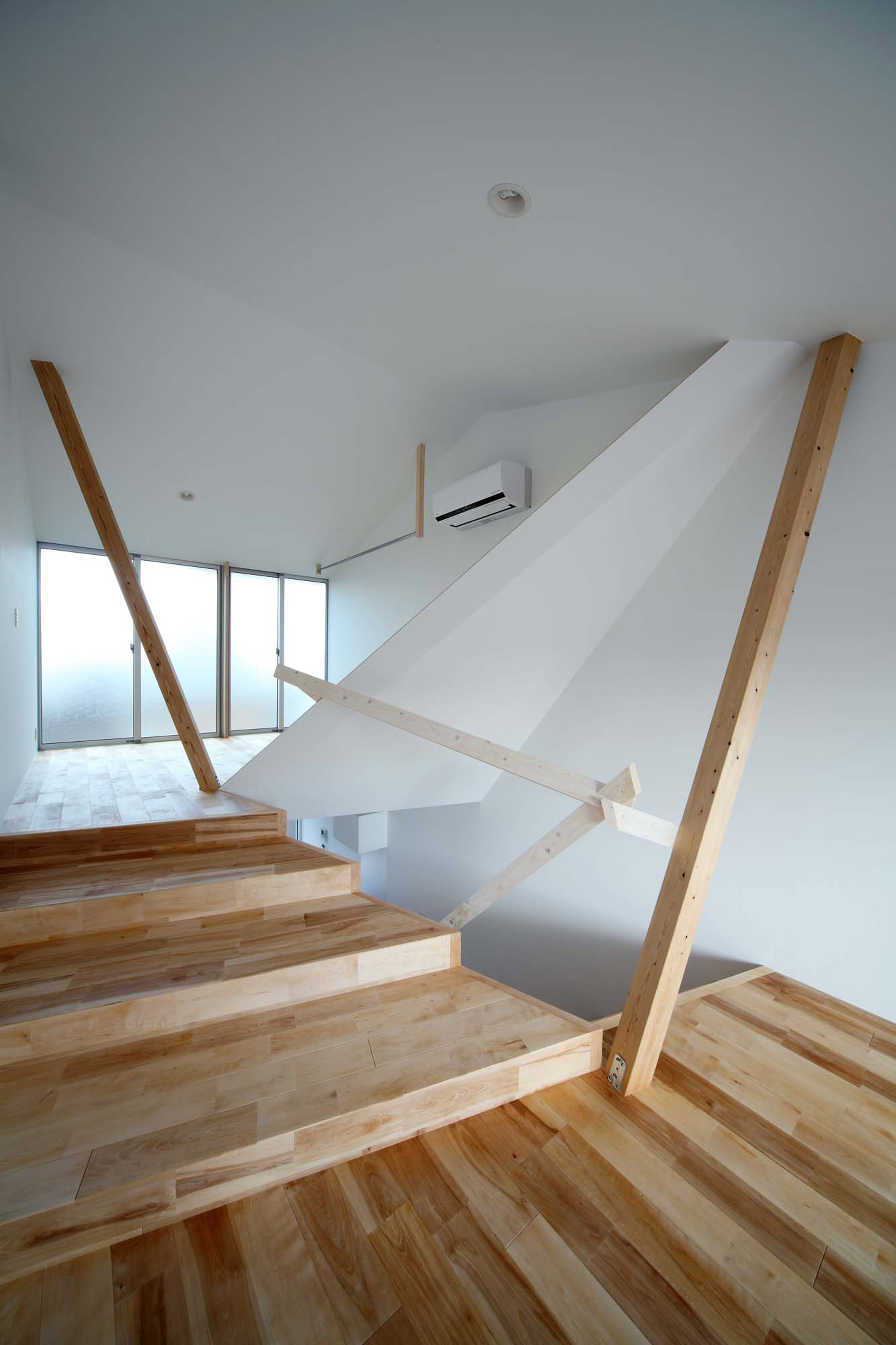 “This house’s three-dimensional shapes and the use of unique braces required the craftsmanship of Japanese carpenters,” added the architects.

The other main aim of the design was to achieve a balance between privacy, natural light and a visual connection with the exterior from within the rooms.

By not pushing the built area to the very edges of the plot, and using a glazed front door, the studio was able to retain views from the street through to the private courtyard at the rear. 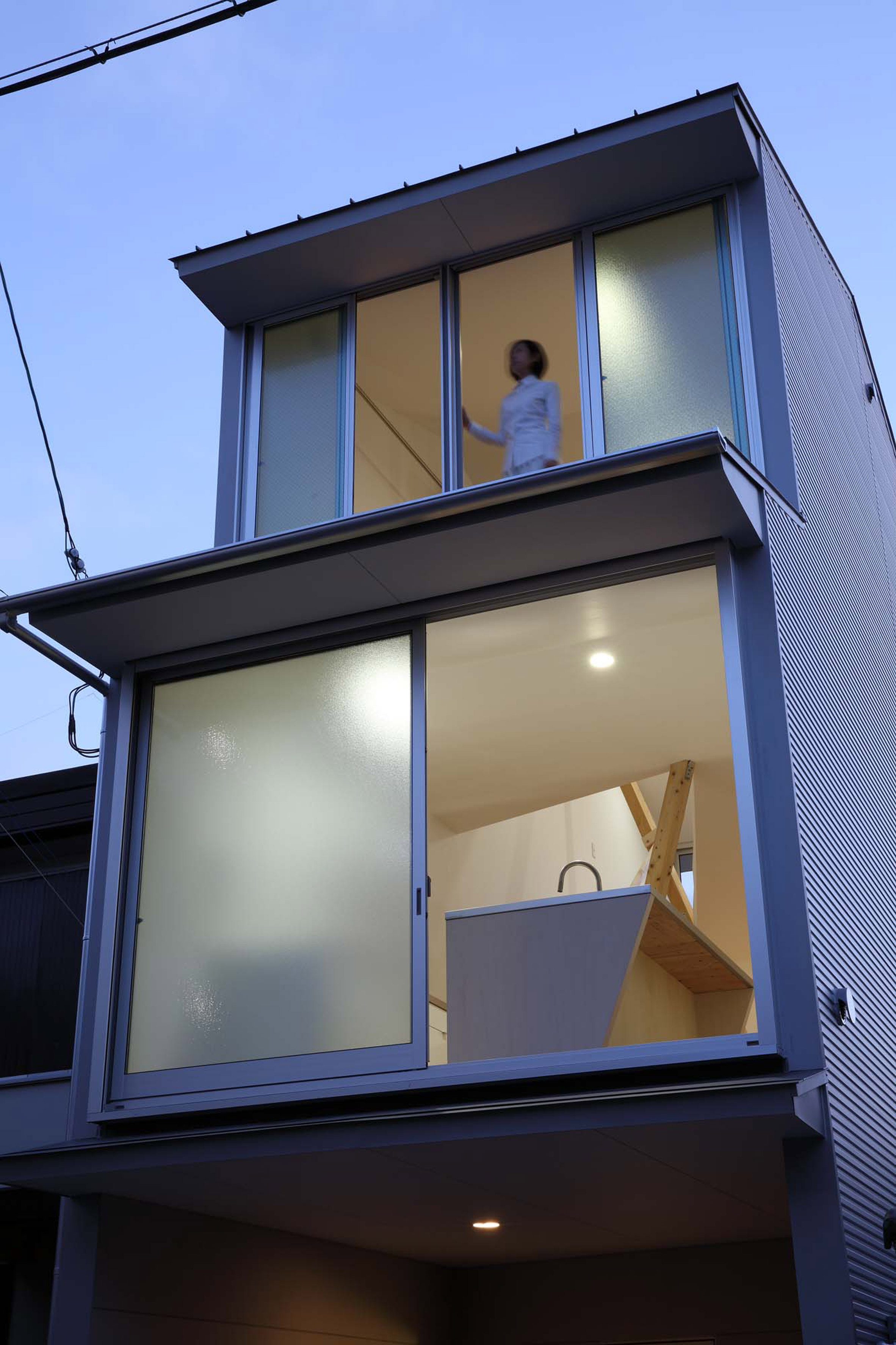 The entrance is set back from the street behind a sheltered car port. It leads into a hallway lined on one side by a bathroom and a utility area opening onto the courtyard.

A staircase with wooden treads ascends around a void at the centre of the building, which extends through a kitchen and dining space, lounge and bedrooms arranged across several split levels.

The rooms on the upper floors are lined with full-height frosted windows facing the street and further openings to the rear. 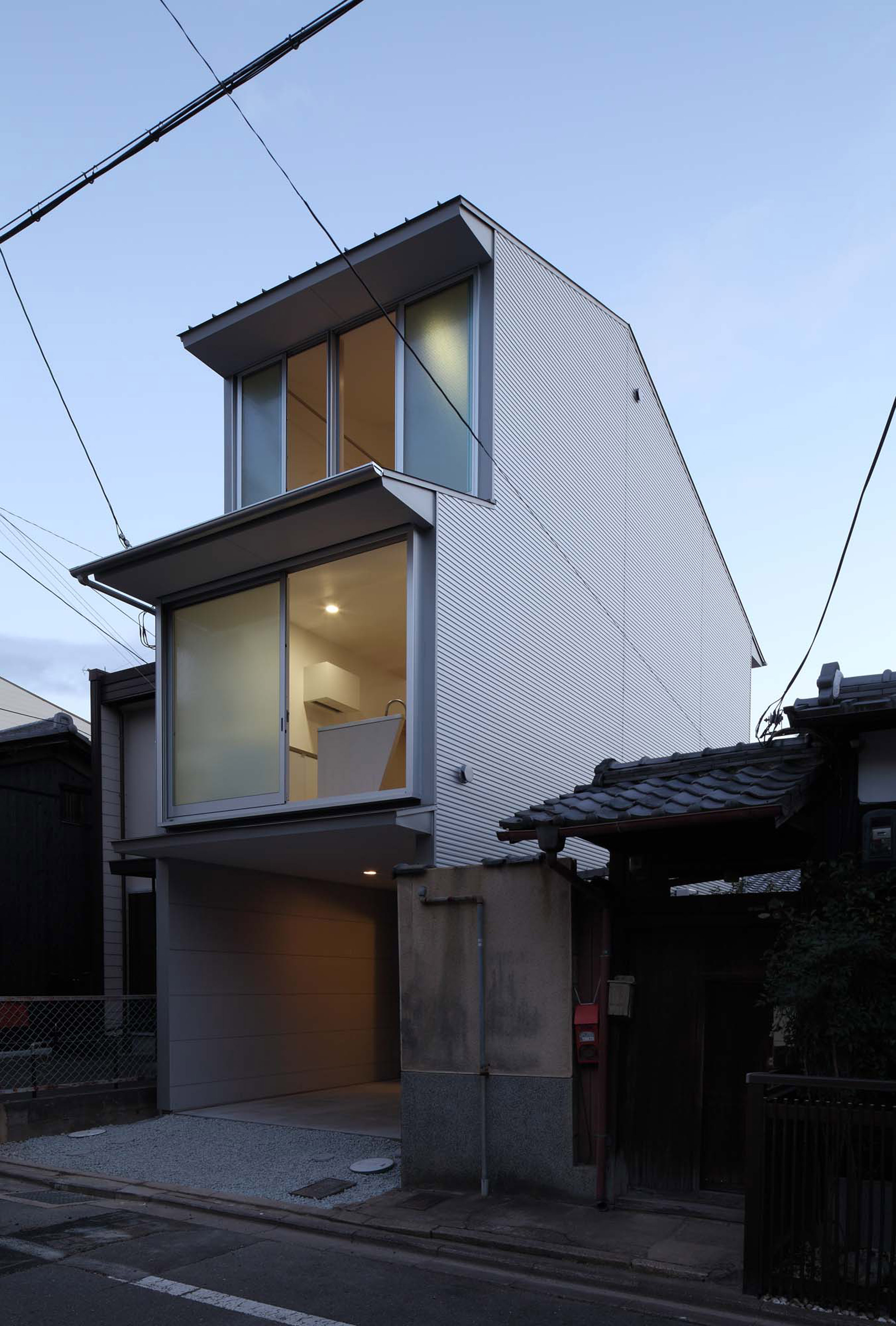 The windows at both ends of the building allow plenty of natural light to flood into the interior, which is able to reach the ground floor through the central stairwell.

Wooden balustrades fixed to the diagonal braces collide in complex feats of joinery, which accentuate the craftsmanship that is integral to the building.

Alphaville’s previous responses to Japan’s small urban plots include an angular apartment building squeezed onto a site surrounded by other buildings, and a house slotted onto a narrow site that is also raised off the ground on crooked stilts.

Photography is by Kei Sugino.