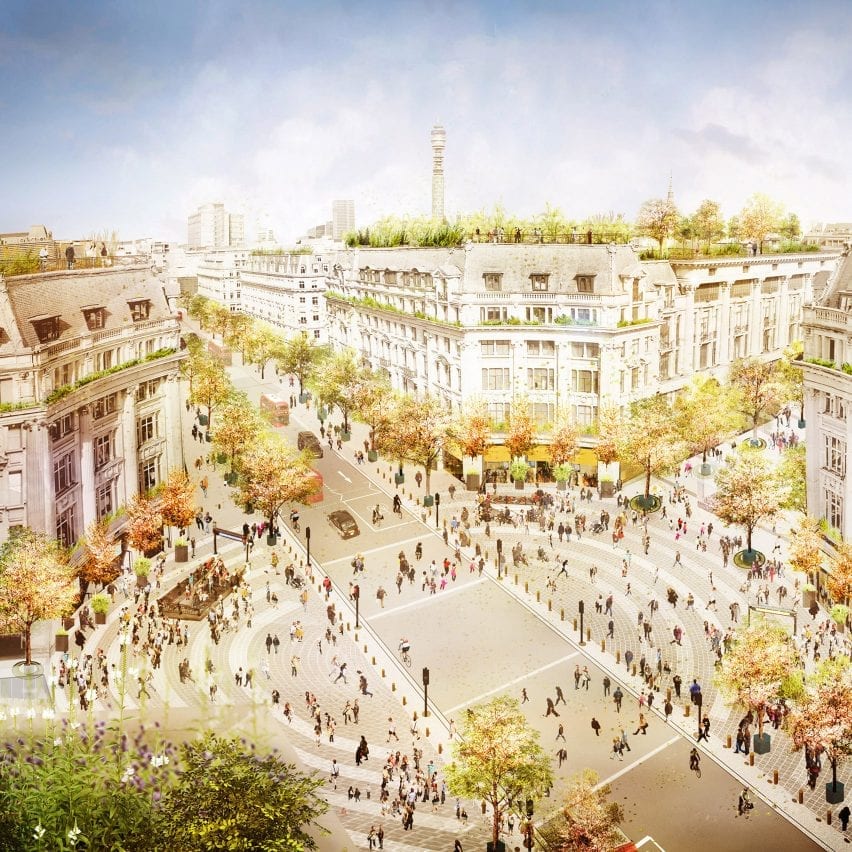 Plans to transform the Oxford Circus road junction in London into two car-free piazzas with trees and seating have been announced by Westminster City Council and the Crown Estate.

An international design competition held by the Royal Institute of British Architects (RIBA) to deliver the final scheme will be held this summer.

The transformation aims to address air quality, safety and congestion at the road junction in the Oxford Street shopping district and is hoped “to create a rival to Times Square” once complete.

Project is “first significant redesign” of district in decades

The plans also respond to changing shopping and working habits, hastened by the pandemic, a need for greener public spaces and the arrival of the new Elizabeth line that is expected to bring in an extra 60 million pedestrians to the area per year.

“The serious congestion of Oxford Circus, of people and of traffic, is unsustainable and demands action” she continued.

“In the aftermath of the pandemic, and with the arrival of the Elizabeth line, there is an overwhelming need and a compelling opportunity to build back better; a business-as-usual approach will no longer work,” added Robathan.

“We hope the creation of these pedestrian-only piazzas at Oxford Circus will not only improve safety, security, accessibility but create an iconic destination at the heart of London.”

Transformation to be carried out in stages

The transformation of the area will be delivered through a phased approach, beginning with the introduction of two pedestrian-friendly piazzas with planting and seating at the Oxford Circus by the end of 2021.

Roads between Oxford Circus and Great Portland Street will be closed through experimental traffic orders (ETOs), as well as routes from Oxford Circus to John Princes Street.

Traffic will continue north and south of Oxford Circus along Regent Street.

The second phase of the scheme will include “major improvements to the public realm” and start in spring 2022.

This will see more pleasant places to eat, drink and shop introduced, alongside improved access to Oxford Circus tube station.

The changes are also hoped to improve bus services in the district and support the council’s existing Greenways project, which is improving the experience of cyclists in the area.

Pedestrianisation of Oxford Street in discussion for years

The idea of pedestrianising Oxford Street has been in the works for several years. London mayor Sadiq Kahn planned to impose traffic restrictions there in 2018 – though this scheme was later rejected.

Zaha Hadid Architects imagined banishing cars from the road in 2018 as part of its Walkable London proposal, and more recently Camille Walala proposed filling the site with blocky street furniture finished in her signature colourful style.

This year will also see the construction of Marble Arch Hill, an artificial hill and viewing platform that will be built by MVRDV near Oxford Street to attract people back to the area following the coronavirus pandemic.

Elsewhere in London, some London boroughs have recently introduced Low Traffic Neighbourhoods (LTNs) to prevent drivers from taking shortcuts through residential streets. One of these boroughs is Hackney, which has introduced LTNs as part of a plan to become a net-zero emissions borough by 2040.

The post Transformation of Oxford Circus into pedestrianised piazzas will "create rival to Times Square" appeared first on Dezeen.