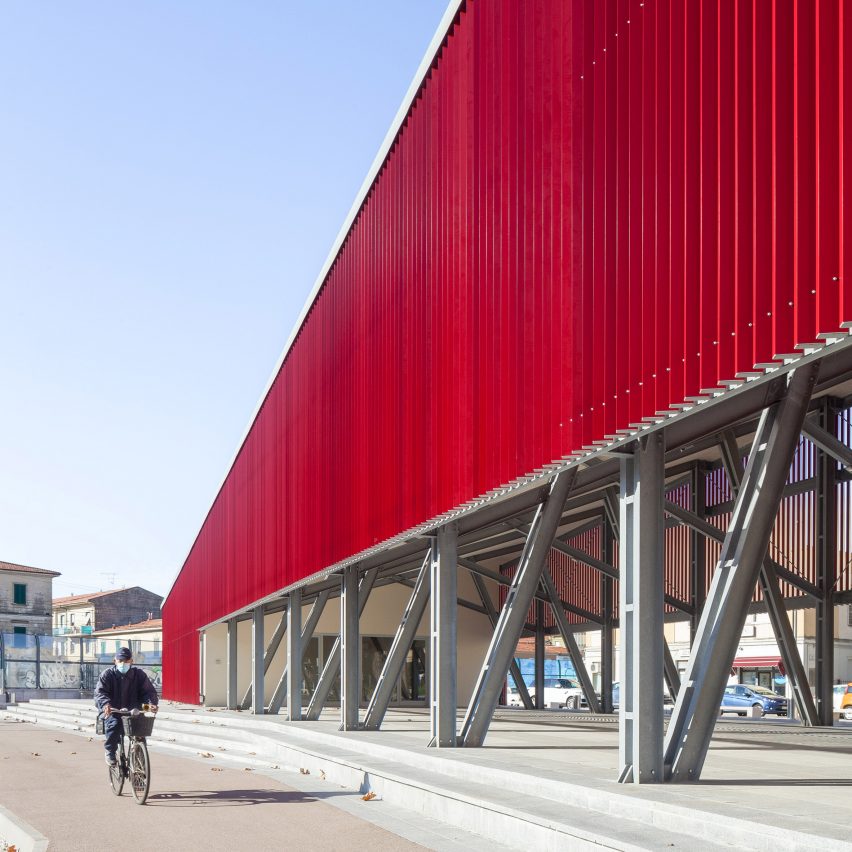 Red aluminium slats form an angular canopy atop a structure designed by Italian architecture office UNA2 to shelter part of a public square in the town of Rosignano Marittimo, Italy.

UNA2, which is based in nearby Genoa, was commissioned by the local authority to oversee the redevelopment of the Piazza della Repubblica into a versatile, car-free public space.

The focal point of the project is a loggia located on the south side of the square, which provides a covered, open space for activities such as markets, exhibitions, concerts, open-air film screenings and public assemblies.

“The loggia is the key element from an urban, architectural and functional point of view,” UNA2 pointed out. “It overcomes the most critical aspect of the square, namely the fact that its boundaries are substantially undefined.”

The rectangular structure helps to organise the public square, which is flanked by buildings to the north, with a disused railway and tree-lined avenue on its other sides.

The loggia forms a new elevation along the southern edge of the square and aligns with a subway leading under the railway line to an important thoroughfare on the opposite side.

The structure’s sloping roof extends from around four metres in height to eight metres at its peak, referencing the heights of the adjacent buildings.

In total, the loggia covers around 400 square metres, including an enclosed space of 120 square metres that contains a pantry, a changing room for staff and storage for a bar that will be connected to the open-air space.

An exposed framework made up of intersecting trusses supports a roof with a V-shaped profile that decreases in height along its length.

“The shape of the roof is characterised by two pitches with a central compluvium along the major axis of the loggia,” explained UNA2, referring to openings in the sloping roofs of ancient Roman atriums.

“The inclination of the roof determines perspective accelerations and decelerations depending on the point from which it is observed.”

The base of the structure is left open up to a height of 2.4 metres. Above this, vertical red-painted aluminium slats form facades that are partially open to let light penetrate.

The angled slats create a sense of transparency that alters when viewed from different perspectives. Light passing through the facades casts shadows on the ground that change throughout the days and seasons.

The cladding extends onto the surfaces of the commercial spaces to maintain a consistent appearance, but on these surfaces it reaches all the way to the ground and is more spaced out to allow views out from inside.

The flooring of the loggia is made from granite paving slabs that extend beyond the building to create a sense of cohesion with the surrounding public space.

The renovation project involved improvements to areas beyond the piazza, including a linear park that extends along the adjacent Via della Repubblica.

The architects planned a series of diagonal paths through the park that create shortcuts between different points, including newly installed outdoor fitness equipment.

At the far end of the avenue, a skate park has been created by adding ramps and curved surfaces to the paving. This raised section of the thoroughfare is situated between two schools and also provides a place for pupils to gather.

A new bus stop was created next to one of the schools on the street that runs perpendicular to the end of Via della Repubblica. The shelter features the same vertical red cladding and zinc roof as the loggia at the opposite end of the park.

Photography is by Andrea Bosio.